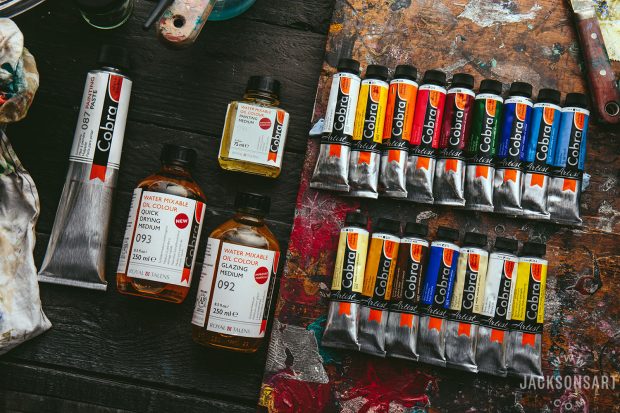 Cobra Water-mixable Oil Paints are artists’ quality oil paints that are designed to be mixable with water instead of traditional oil paint solvents like turpentine or white spirit. Water-mixable oil paints can be thinned with water or with a water-mixable oil medium. Cobra make four mediums that allow you to modify the thickness, drying time and oil content of your paints. Even if you don’t use water to thin your paints the benefit of cleanup with just water saves a lot of time and avoids the need to have harsh solvents in your space.

Max Hale is a painter who has won many awards, shown in London galleries, writes regularly for magazines and demonstrates to art societies. He attended Harrow School of Art where Ken Howard OBE RA was one of his tutors. His website shows his teaching programme which is regularly updated with new courses, holidays and related events. He produced a DVD on painting with water-mixable oils, that we stock at Jackson’s: First Steps In Water Mixable Oils. Max Hale uses Cobra Oils in his practice and his workshops and has written here about how he uses the paint. 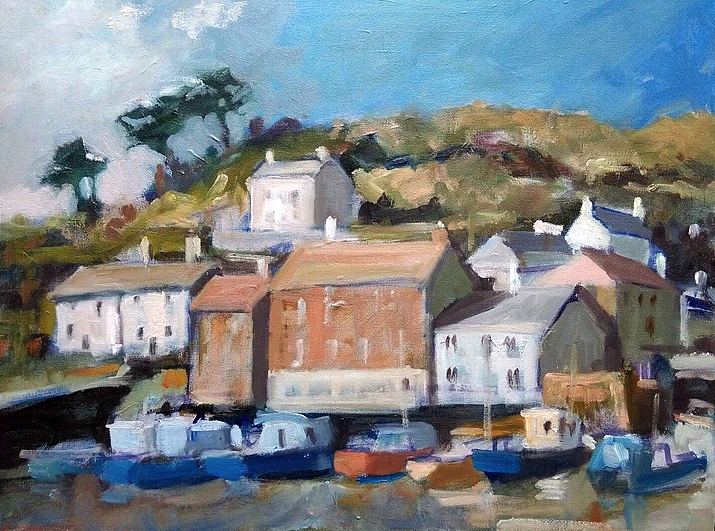 Cobra is genuine oil paint; the difference between them and traditional oils is that Royal Talens add an emulsifier which enables the paint to be used with water instead of solvents. Using water as a mixer or thinner makes it much less complicated in use, so it is in cleaning brushes, palettes and your hands.

Water-mixable oils have been around for at least a decade; I have tried them all and Cobra is without doubt my first choice. The paints are creamy with superb refined pigment depth. The stable of colours is pretty comprehensive too with 70 in the range. The tubes come in 40ml or 150ml and starter sets can be bought with typically five tubes to make it easy to try them out.

As a tutor I often teach in institutions that won’t allow oil paint simply because it may cause breathing difficulties due to the various solvents needed in traditional oil painting. With Cobra of course there is no such problem. Yes, there is a faint smell of oil to the paint which you’d expect but no other odours at all. I’m hoping that artists who want to use oils will lobby their committees and overturn these rules as water-mixables become more mainstream, as I predict they will.

In use Cobra is the same as traditional oils in that the application of fat over lean still is the way. If the paint is diluted to construct your work as you might be using white spirit with traditional oils destined to be painted over later, that’s fine. If you prefer to paint thinly as a finished result, similar to a watercolour style, Talens manufacture a painting medium to add to your mix at about 20% which extends the protection to the pigments and I recommend you use it.

When paint is used with simply a moist brush, how I paint most of the time, the ‘drying’ time is similar to that of traditional oils. Remember again that drying is what paints do that have water in them but Cobra only uses it as a partial carrier and it isn’t ever integral to the paint. Oil paint hardens over time and Cobra being a true oil paint does the same. This means that it should be left for a year typically before varnishing unless applied very thinly.

I have used Cobra for as long as they have been around and I’ve pushed and pulled them, layered them, used them in an impasto style and tested them in every circumstance. I have run workshops for artists who wish to try them and almost without exception they have been impressed with the convenience and pure product quality. Many may have given up on oils due to the plethora of solvent choices coupled with the unpleasant odours and gone for acrylics instead.

If you are usually an acrylic painter, the benefits of using Cobra are easy to accommodate in your practice. I have met few who have lauded fast-drying as being a useful feature of acrylics and certainly the darkening of the painting where often the highlights lose strength and the value structure becomes flatter is less than appealing. The draw therefore with Cobra is that none of the above applies, plus the beautiful subtleties of oils give many pleasing results whilst staying true to the original application. Previous acrylic users paradoxically find a painting being wet even the next day something to come to terms with. I guess the use of water is a confusion and old habits die hard. As usual if an artist has been successful at using a medium it can be tricky to convince them to change, however Cobra is a simple switch even when using traditional oils. Cobra can be added to an existing palette of traditional oils but obviously to be used with the usual oil mediums as mixing the two with water just wouldn’t work. 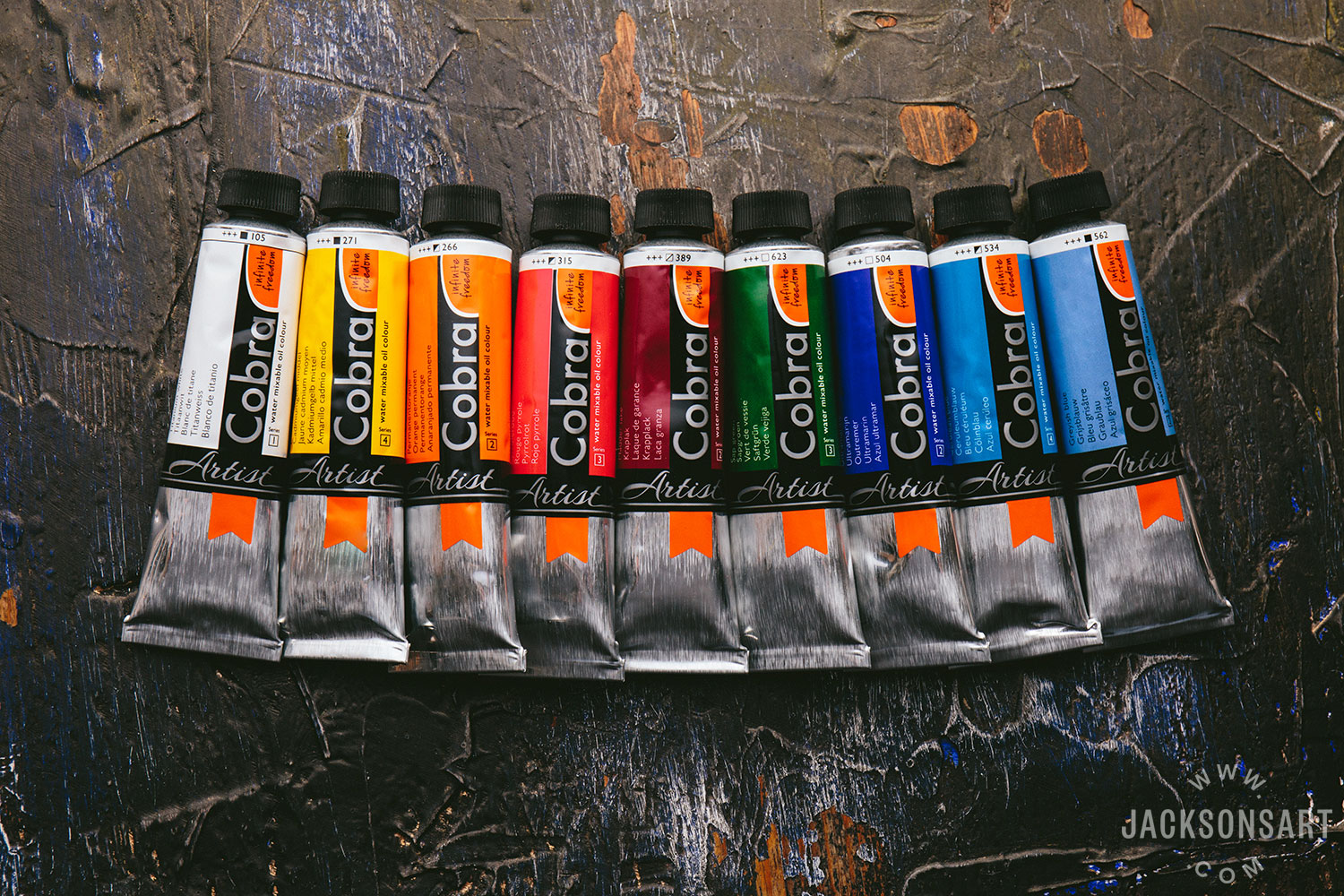 The colour palette I use with Cobra has varied over the years but the following basic nine gives me a standard to modify depending on my subject.
Titanium White, Cadmium yellow medium, Permanent orange, Pyrolle red, Madder lake, Sap green, Ultramarine, Cerulean, Greyish blue.
I may add, Naples yellow light, Yellow ochre, Raw umber, Cobalt, Titanium buff and Zinc white according to my requirements and sometimes Permanent lemon yellow especially good for modifying and making cool greens. 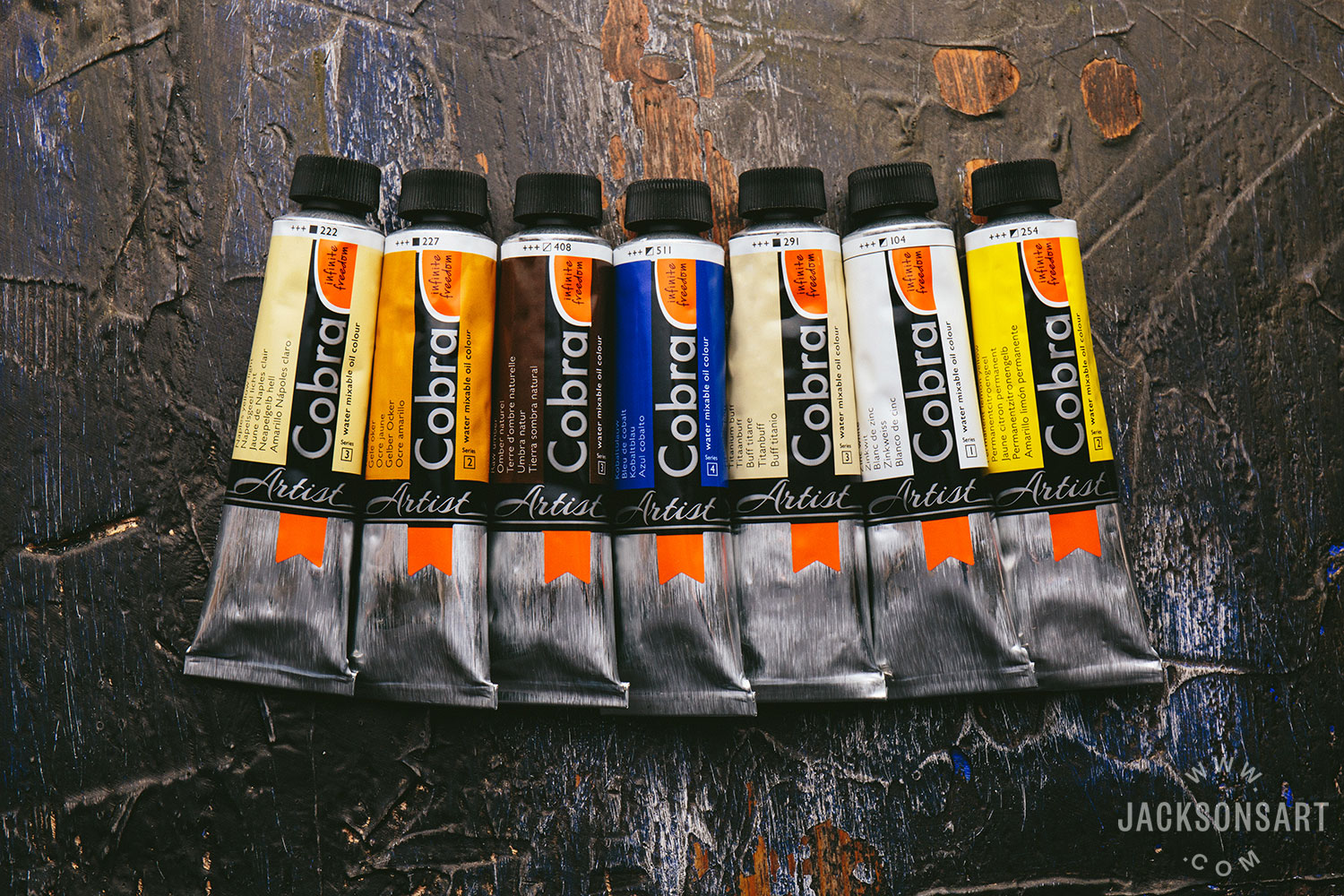 All Cobra water-mixable oils have a +++ on lightfastness which means that they are tested to at least 100 years under museum conditions. There is a four series price structure where typically the cadmiums are 4 but nothing unusual about that and if you want to use an alternative to save money there are some. I like Pyrrole red for example which I use in place of Cadmium red on occasions and this is series 3. One more feature is the universal gloss across all colours. 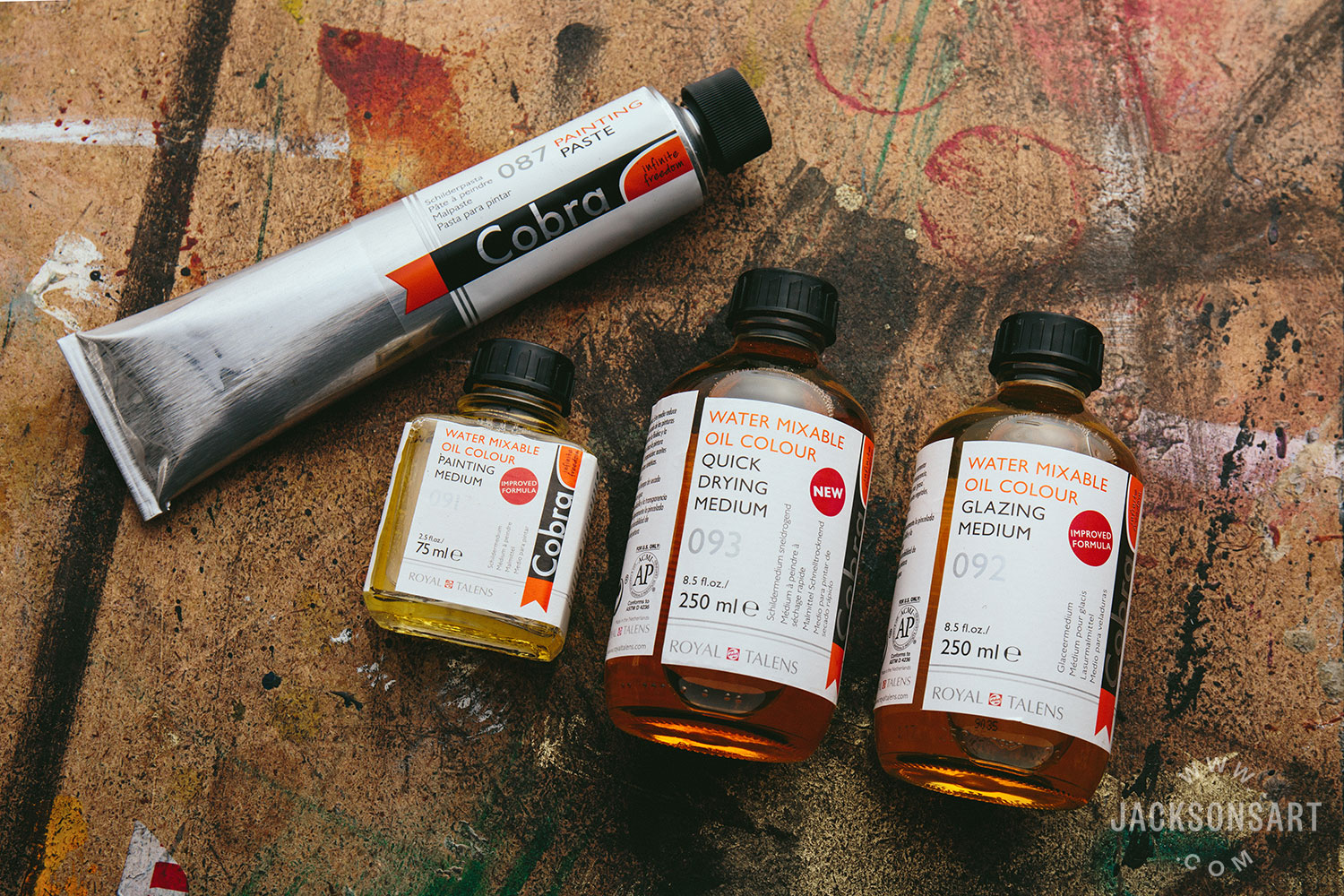 For auxiliaries, Cobra Paste will extend the paint and is just like adding colourless medium in the same consistency. It’s good for using expensive colours and impasto techniques, the more paste added the more transparent the colour will be. It’s also possible to reduce the tinting strength of a dominant colour in a mix by adding a proportion of the paste to the stronger hue.

Cobra Painting Medium will thin the paint and make it creamier whilst increasing the durability of the paint. It can also be used for wet into wet painting but if left to dry when mixed with paint it can be used to paint over and layered. Adding medium makes the paint ‘fatter’ and water makes it ‘thinner’ so layering techniques can be used with paint/water first, then a mixture of paint/water/medium and finally with medium/paint.

Cobra Watermixable Oil Colours and Mediums are available as single tubes and in sets.

Postage on orders shipped standard to mainland UK addresses from jacksonsart.com is free for orders of £39.

Paper making requires a supply of clean water and

Make sure you're subscribed to our newsletter for

Etchr's range of sketchbooks are a great starting

Schmincke Horadam is one of our best-selling water

Based in Erlangen, Germany, KUM is the world's lea

A great way to try some of the Caran d'Ache sketch