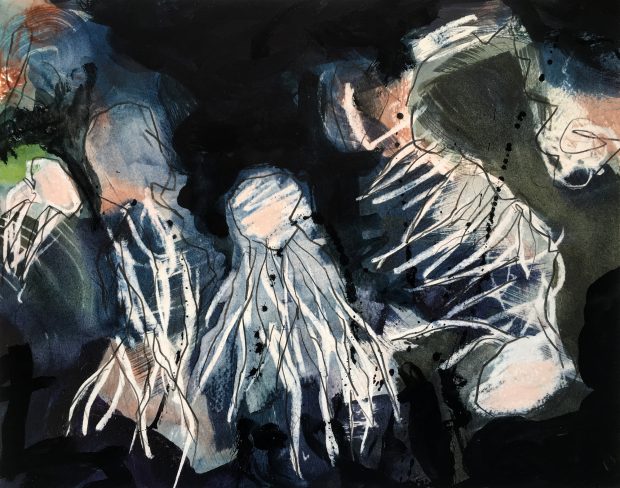 Colin Duncan’s work is a response to nature and its many curiosities, contradictions and powers. At a time when the ecological crisis is a major global concern, Colin reflects on his responsibilities as an artist, the relationship between art materials and his subject matter, and his most recent observations on the environment, in the run up to his forthcoming exhibition. All works presented are watercolour, pastel, oil and charcoal on paper, created both en plein air and in the studio by Colin Duncan.

In the current ecological dialogue on the impacts of habitat loss and climate change on the environment, art is a narrative that I believe has a role to play. Interpretations of nature as art can provide a unique insight into the wonders of living things and their intricate complexities.

Through the artist’s lens natural phenomenon can be reimagined on paper to create new painterly worlds. And from those simple observations creative ideas can emerge. 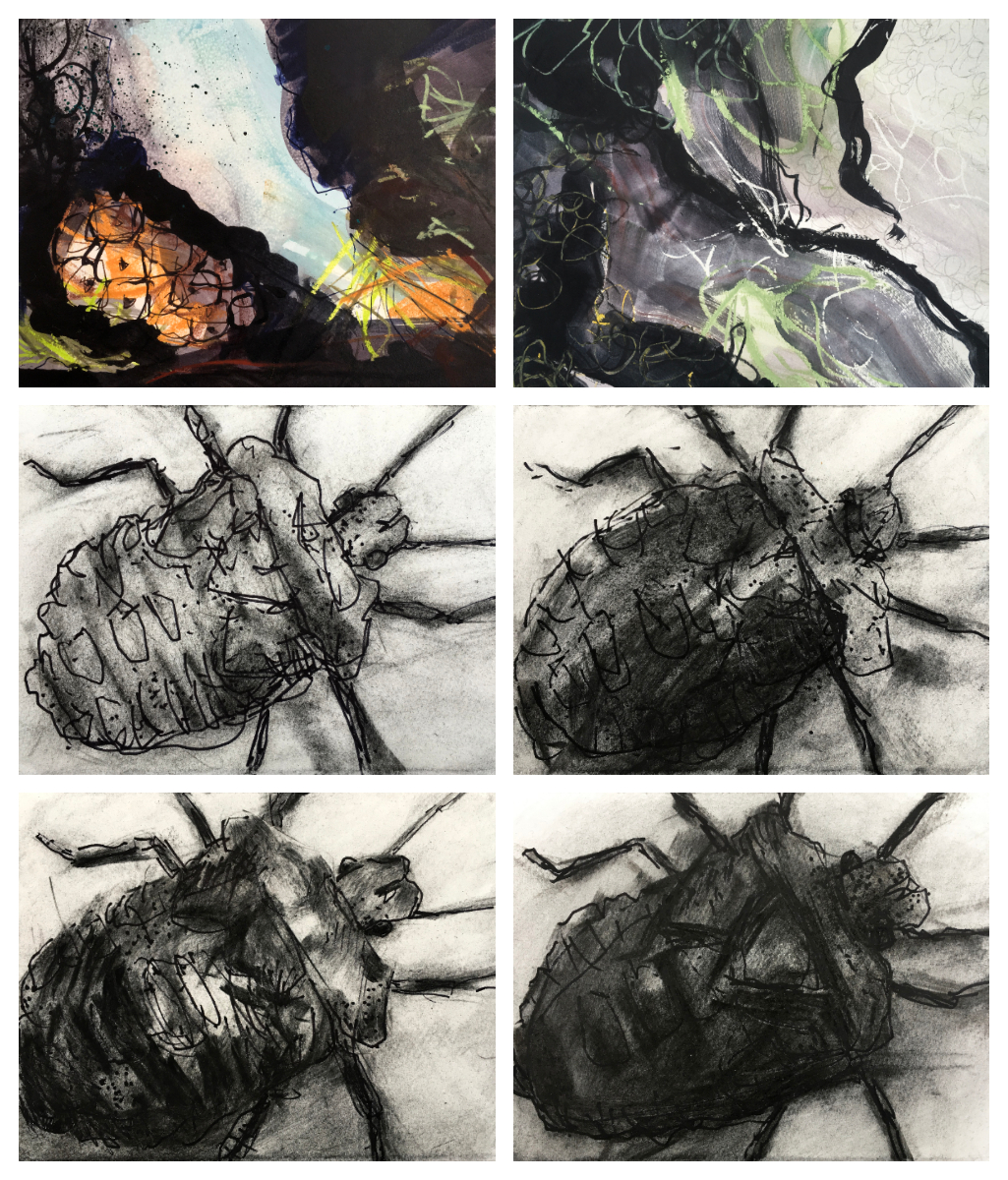 In Dundreggan forest an upturned Scots Pine tree with small Pine Saplings growing from its root base; lichens clinging onto its branches and beetles boring into its fallen body – it’s dead wood living, thoughts of habitat regeneration, natural cycles of life and death come to mind.

I am attracted in the first instances by the visual appearance of things – looking up close, miniature universes unravel. In observing closely we start to recognise nature’s own languages of attraction, insect to plant, moving from one to another with obsessive determination or the symbiotic symmetry of algae and fungi in lichens and their beautiful structural manifestations. Details of flower heads and butterfly wings can become explosions of colour and flowing dancing lines of watercolour, pastel and pen.

Dog lichen with its fang like rhizomes float ghostly across the picture surface and trumpet shaped cladonia lichens display their apothecia – blasts of red pastel jumping from the watercolour. 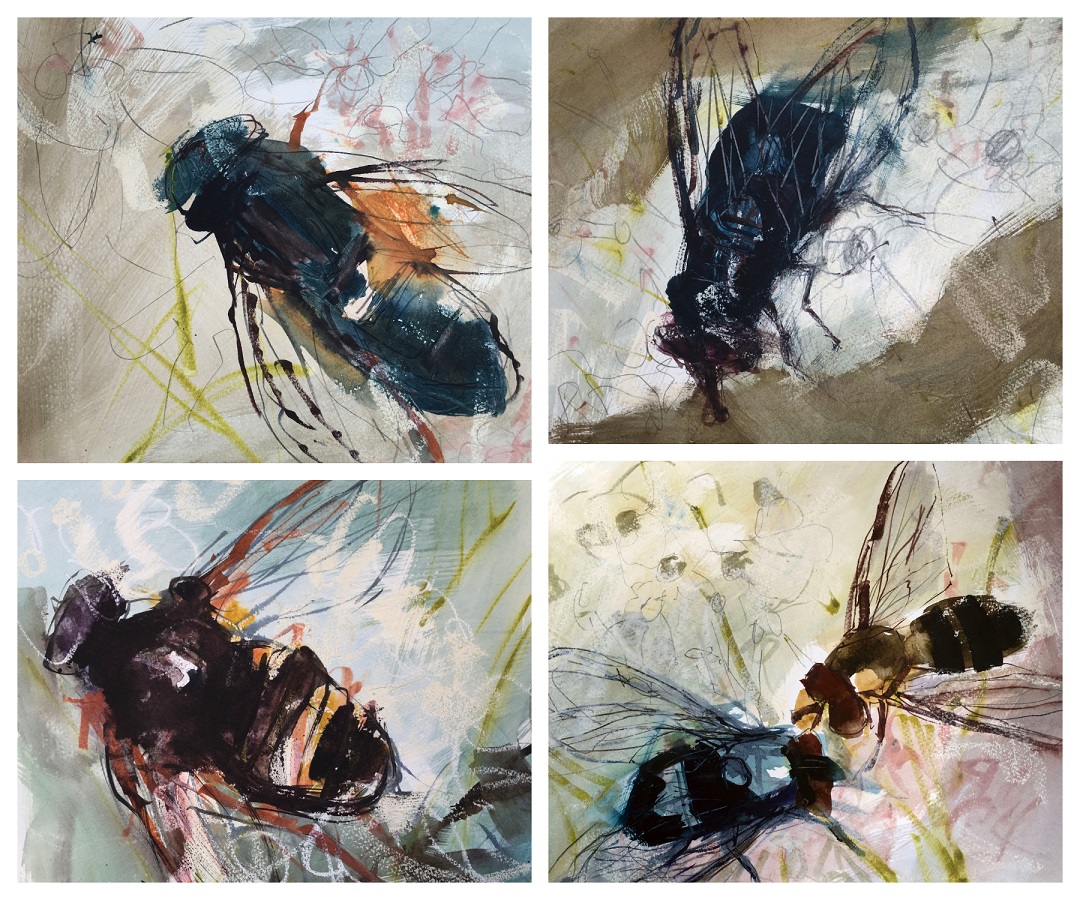 In a woodland meadow, common hogweed are hosts to numerous species: hoverfly, bees, and bluebottles to name a few.

Stepping back from the minutiae to larger views, and majestic stands of Scots Pine trees are transformed into interlaced strokes of thick oil paint – deep, dark, moody veils of winter forests or remnants of oak woodland dappled with bright sunlight revealing paths that draw you into the picture like an inviting embrace. 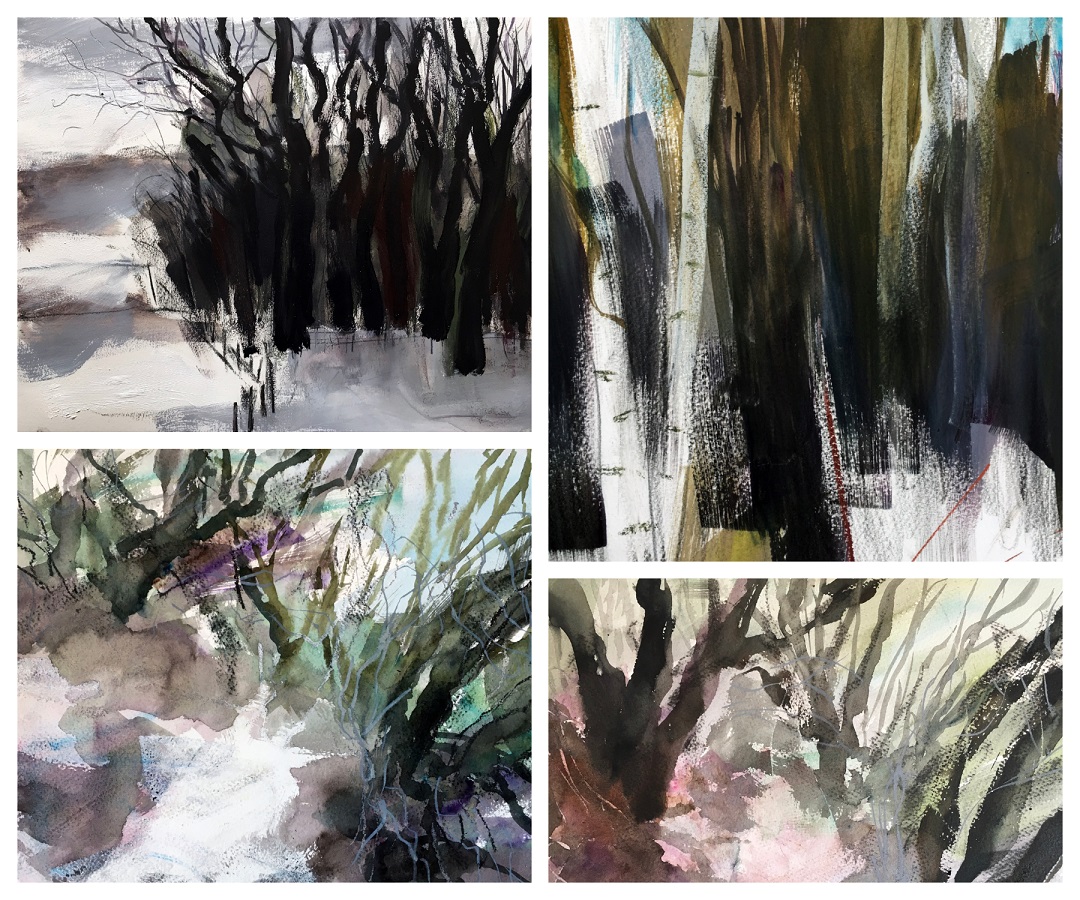 Snow covered rolling hills with hints of soft pinks and blues of reflected light have a tranquil melancholy that can chill the soul. In these landscapes the human signature is more visible, containing fences are scratched and etched in pencil scarring the paint surface or clusters of trees are corralled into isolated islands within a sea of grazed fields. 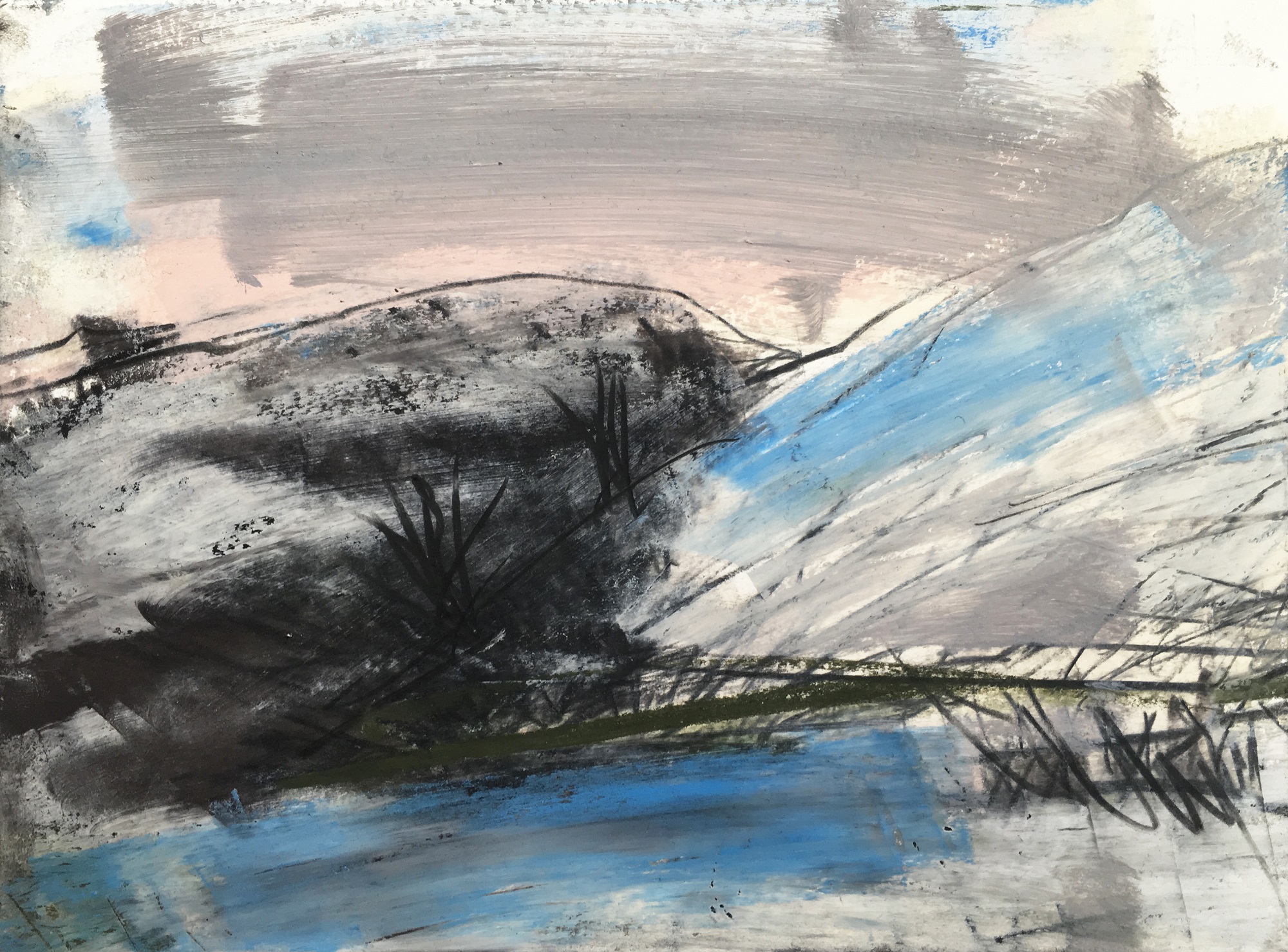 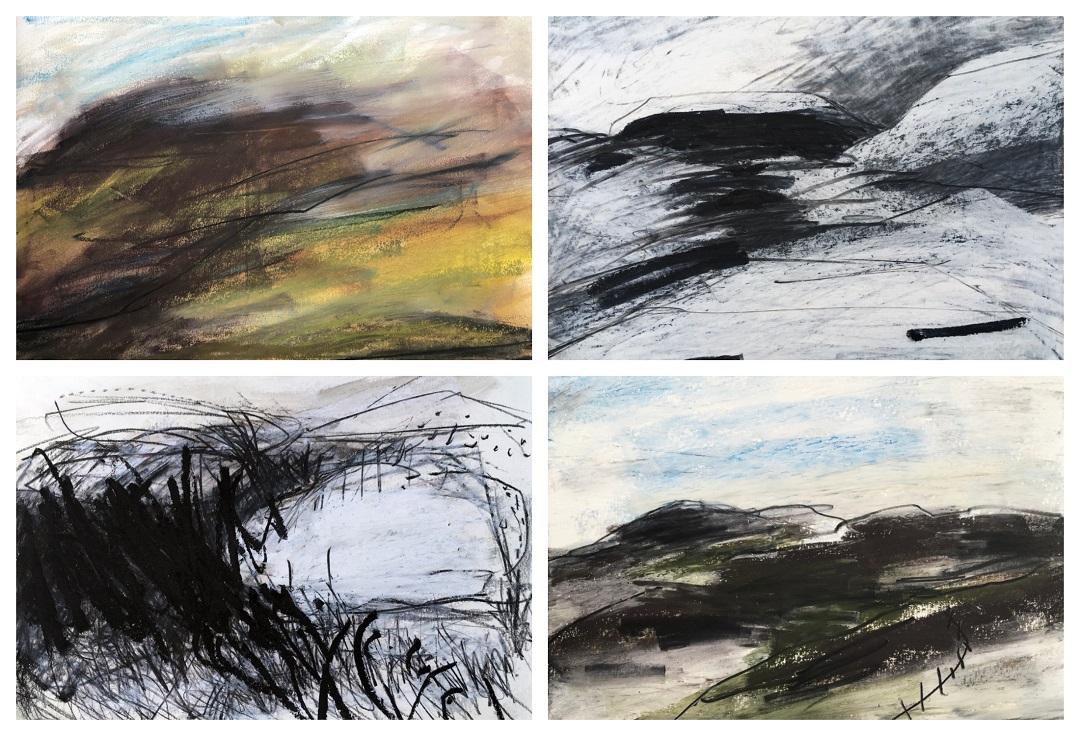 In parts of the Pentland Hills trees are noticeable by their absence or are contained within enclosed ares of conservation. In the depths of winter, it is an environment that can throw up contrasting sensations of bleakness, isolation, calmness and refuge.

From looking at the landscape through drawing, nature too has subtle ways of revealing its history. A scribbled tree, standing alone virtually overlooked in a hilly blanket, can on reflection be a small scream to a more diverse past, a haunting to what has been lost and is being lost. 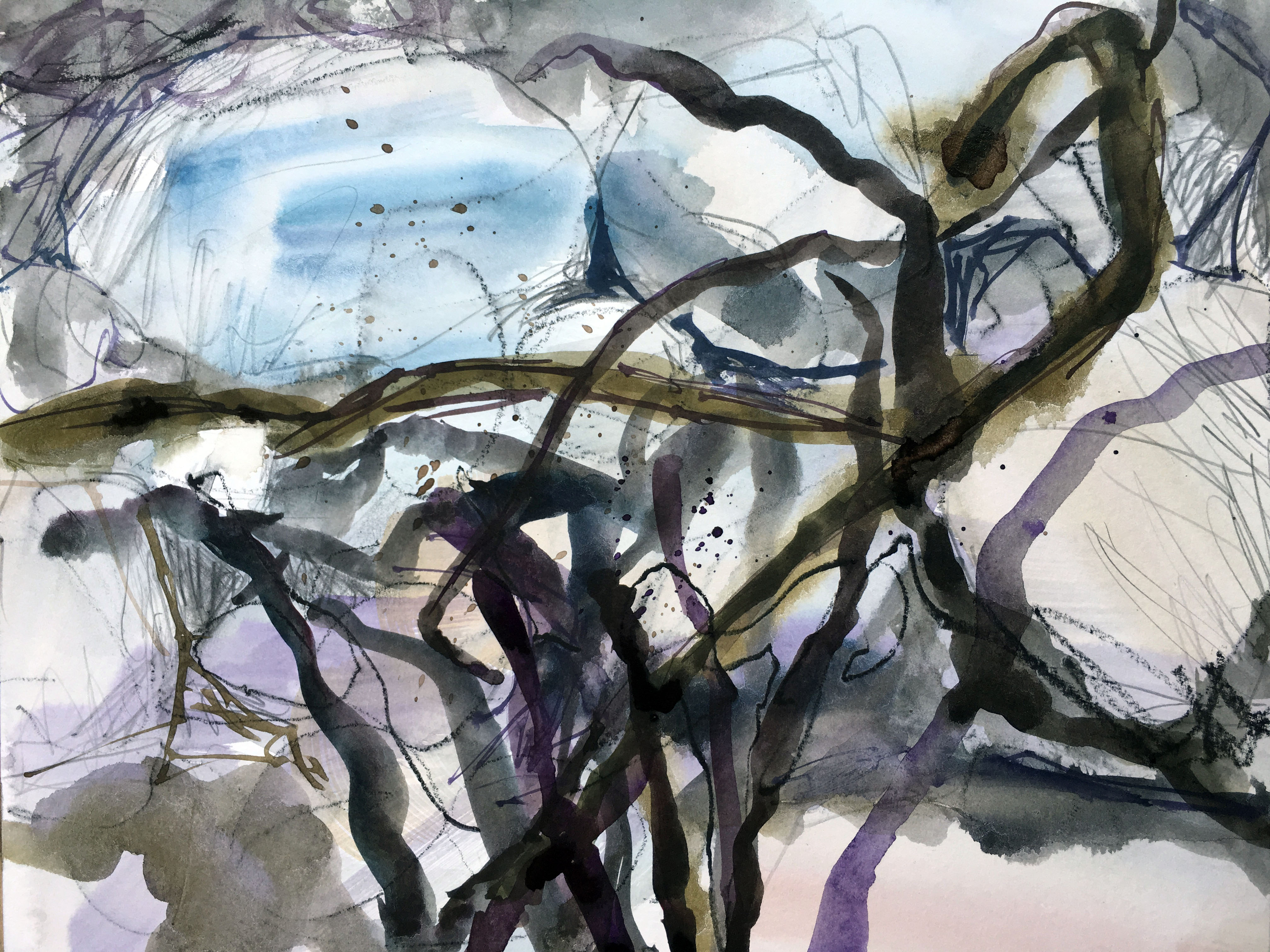 Whether intentionally or unintentionally, engaging with nature through art can comment on the state of things, exposing its vulnerabilities and consequences of human impacts on its ecological balance.

Painting on the coast, initially drawn by the abstract painterly qualities of the rich, dark forms of seagrass, now layered lines of fluid ink that snake through pebbles of pale watercolour washes, it becomes impossible not to notice or ignore the litter and washed up detritus. Out of a sense of frustration and anger the man made objects entangled with the natural forms soon become part of the paintings. Ambiguously incorporated into the images in order to blur the lines of what exists naturally with artificial elements discarded in the sea. 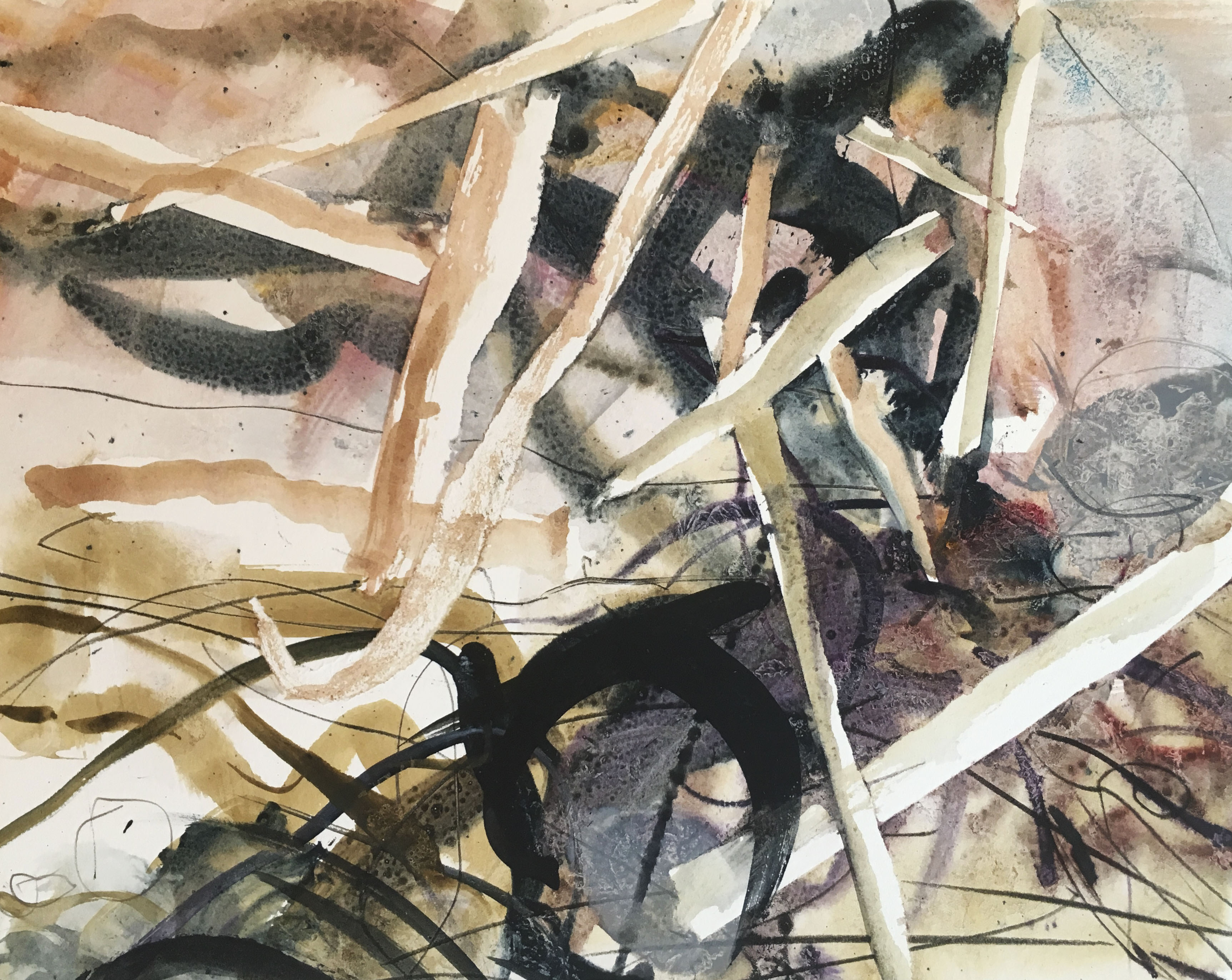 Although there is an underlying thought that feeds my working process: a need to readjust our relationship to our natural world to one that is more symbiotic with other species and to shift from our current anthropogenic ways to a more ecocentric existence. For me it is also about feeling part of nature, of being fully immersed in it. When working intensely outdoors there are occasional euphoric moments, when almost in a trance-like state there is a ‘click’ moment, an intuitive connection with land, sea and air that seems to transcend time and reason. Perhaps a trace of a wilder innate self is ignited within but how the experience transforms itself into the pictures at times goes beyond any predetermined imaginings or defined expressions. 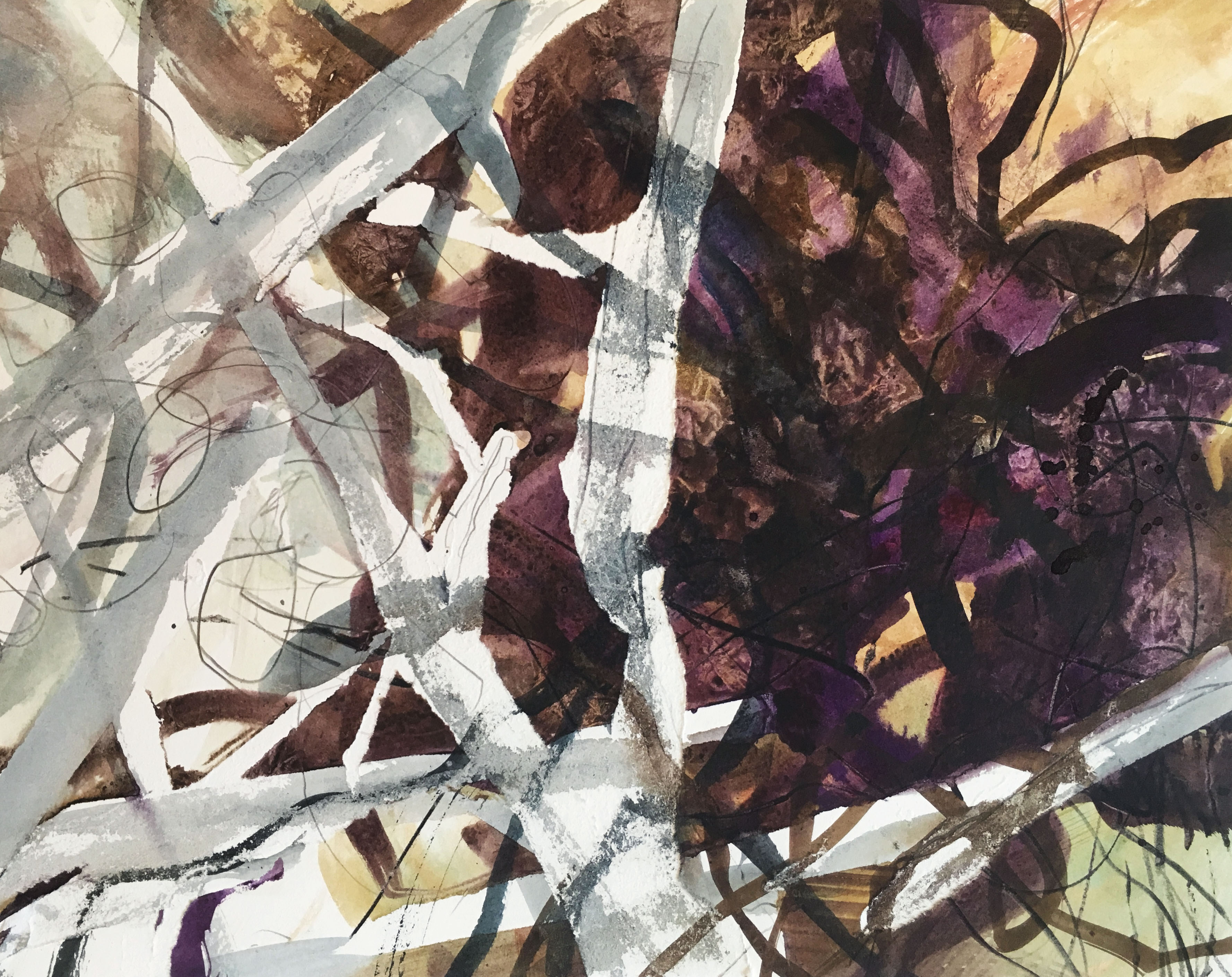 The result is often an orchestration of colours, lines, marks, smears, smudges and splashes that are composed, that’s true, but how exactly that happens at these moments is not always clear. 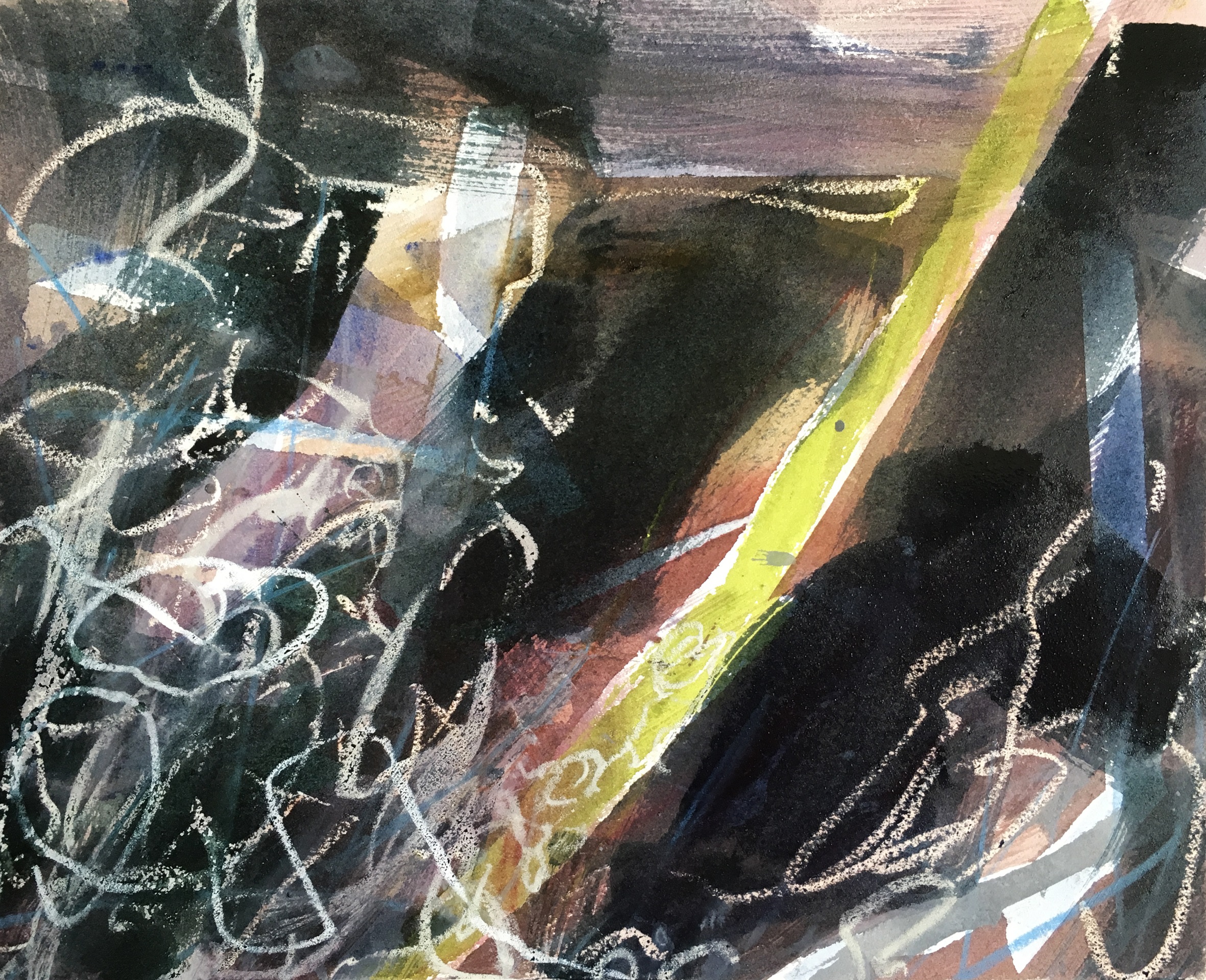 What is clear is that my drawing and painting doesn’t attempt to capture a realistic representation of a view as such, but is an expressive response to the experience of it. Impressions of nature, and it’s infinite magical detail, that reflect an interconnectedness of ecological systems are transformed into abstracted organic shapes, fluid paint strokes and gestural mark making, either directly, en plein air, or back in the studio. What’s left, I hope, are objects that sing their own tune but whose heart is embedded in the natural world that I love. 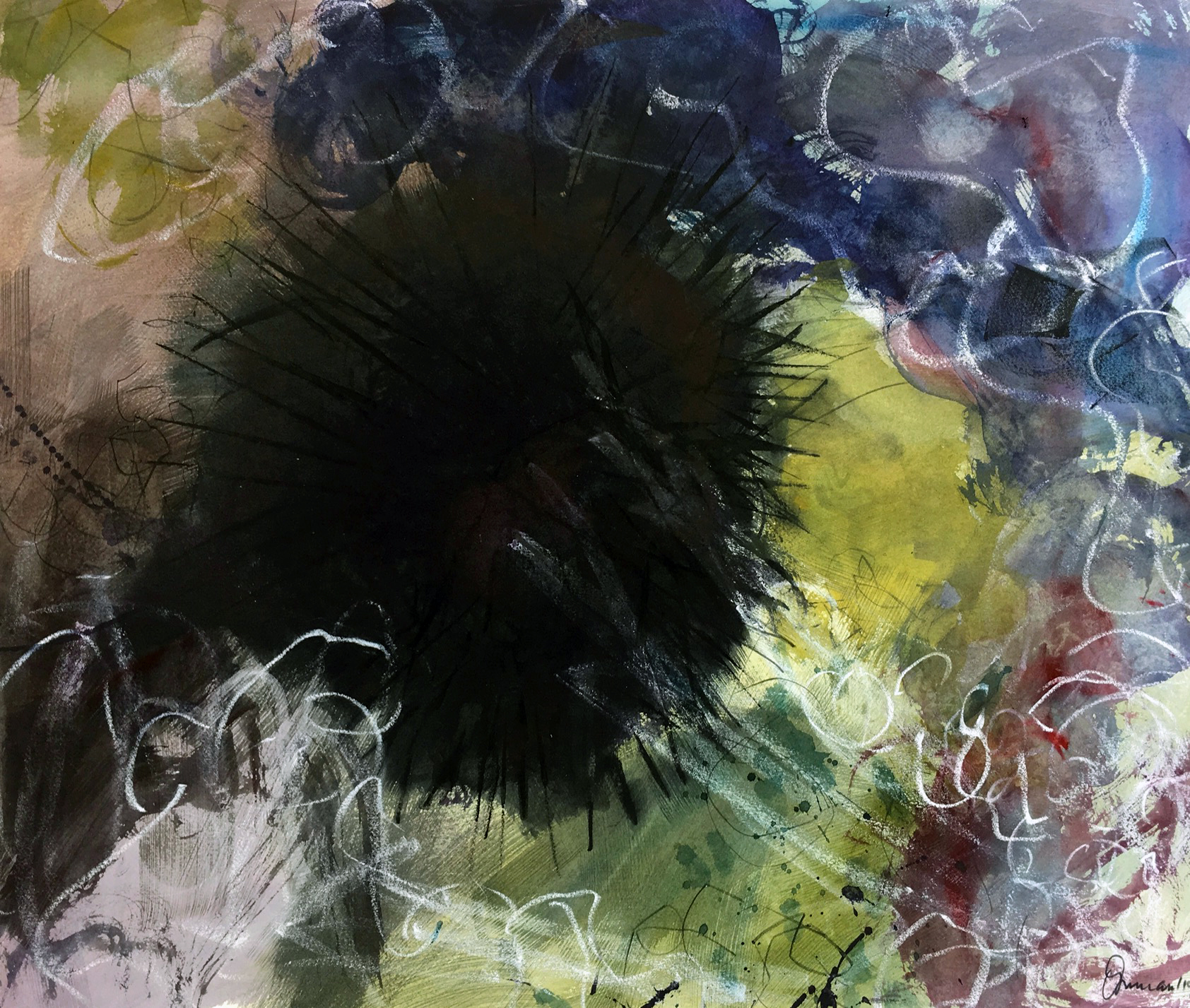 For many good reasons, much is now being written about rewilding parts of the earth. From my art perspective, to be in a wild place drawing and painting can be a way to shed stresses from living an urbanised lifestyle for the majority of my time and to reconnect with a wilder inner self. Creating opportunities for wild spaces to recover is surely essential to the well being of the planet but also, on a cultural level, massively beneficial to our role on it.

As Mark Cocker eloquently puts it in his book Our Place,

“Replenishing our collective spirit involves our immersion in nature’s unfathomable and obliterating otherness, so it can purge the travails and toxins of our own making. Nature’s great irreversible continuities – the passage of the clouds, the turning of the seasons – measure all our smallnesses. They put things in perspective. They render us humble. Nature is the go to place when life seems too full with self generated woe…..”

The opportunity of helping to establish a native woodland with all the potential species that it could support became the driving thought behind my current art project. Over the last two years I have explored four different landscapes with distinctive natural habitats:

Near to Plockton, more lichens, this time attached to white and yellow encrusted rock interlaced with washed up bladderwrack seaweed – subjects animated in pen and ink sketches that reference a different forest, one of a mysterious underwater world.

The exhibition ‘Dead Wood Living’ at the Tent Gallery brings together a selection of drawings and paintings that link the various landscapes experienced to create a flow from one to the other that offer a visual narrative to this two year journey.

Between Aberlady and Berwick images inspired by rock pools and sea life revealed by the ebbing tide, at times, become contaminated with washed up bottles.

It’s a journey that began at Dundreggan forest, and as this project comes to an end, it is also where I hope the journey will continue. Dundreggan is a 10,000 acre former estate now in the hands of Trees for Life, a wildlife charity working to restore Native Caledonian Scots Pine forests to several locations in the Highlands of Scotland.

On the Greek Island of Kalamos wildlife was abundant. Aleppo Pine perched spectacularly over rocky cliff edges, Caper Flowers were in full bloom and with every step Crickets were jumping and Geckos scurrying. Hornets, Wasps, Bees, Moths and Butterflies filled the air with movement and the call of the Scops Owl and ring of Cicadas filled the nights with sound.

Although the exhibition as a whole may only serve as a metaphor for a small woodland, each picture a fragment that represents a cluster of trees, the real objective of this artistic output is to plant as many trees as possible. Trees for Life have kindly agreed to do this at Dundreggan, in Glen Moriston, with funds raised from a percentage of any piece that may be sold being translated into trees being planted. In this respect I see this project as a collaboration between my input, the drawings and paintings, the Trees for Life staff and the person who may be interested in owning a picture. 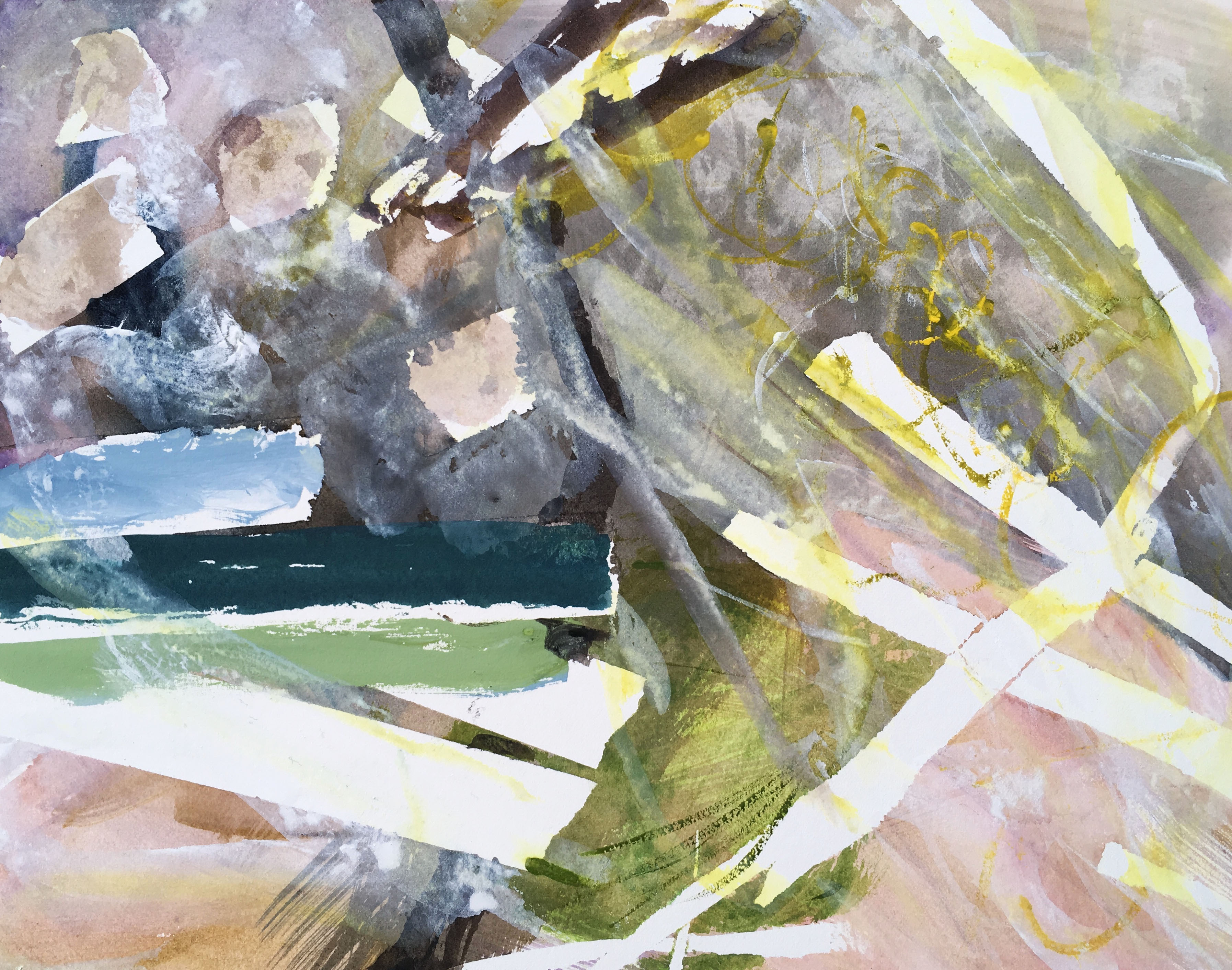 From a beach on Kalamos a found water bottle was filled with organic matter, shells, pebbles as well as discarded items such as plastic straws, twine, fishing lines topped up with sea water; a sample that became symbolic of that particular stretch of coast. Paintings were then made of sectioned details seen through the plastic, micro studies that deliver a message in a bottle that reflects a larger scale concern of marine pollution.

Even though, in this instance, the contribution that may be made in light of the scale of the problems of habitat loss would only be a token one it is symbolic of how individuals’ actions with a collective goal, I hope, can have positive impacts and make changes to improve our natural environments for the future.

And, the ultimate creation, well that will be all nature’s doing as an ever evolving forest grows and a diverse ecology of species develops. 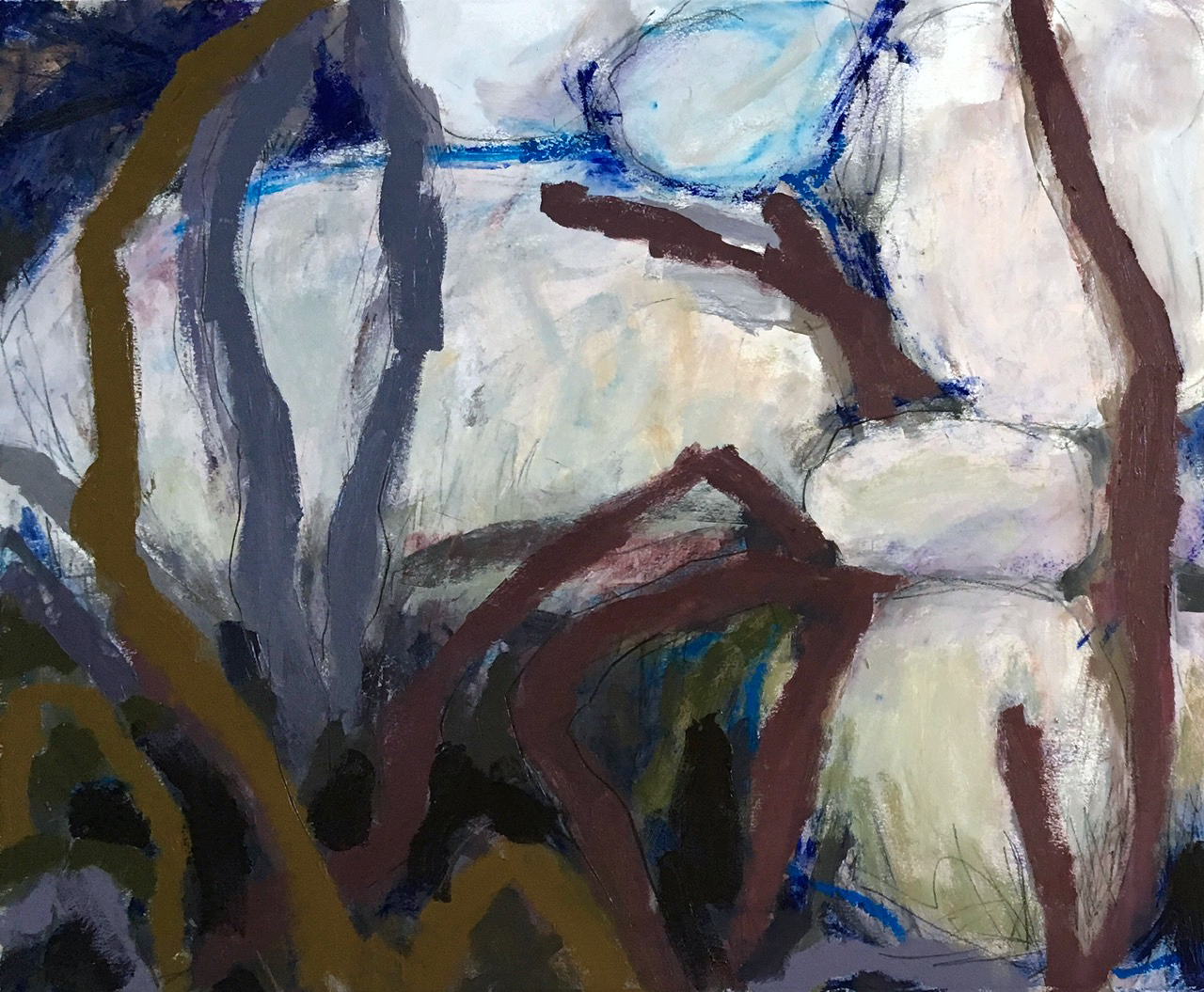 30% from any painting sold will be donated to Trees for Life to plant trees. Each tree costs £6 to plant.

Used in artist paints since the 18th century, Zinc