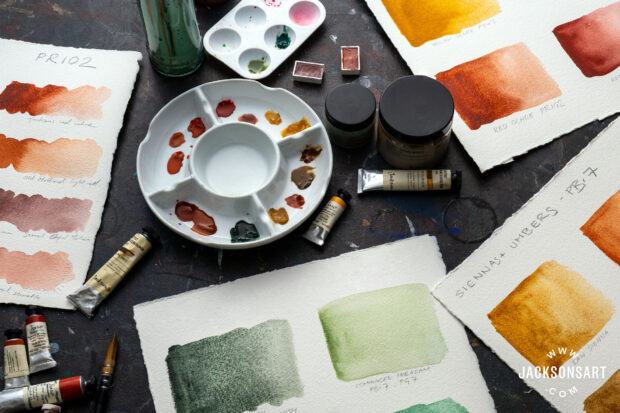 Earth has been used as a pigment since prehistoric times. Earth pigments include an enormous range of colours, from warm and strong reds, to cool and gentle greens. In this article, I look at the most commonly used earth pigments, their synthetic alternatives, and how to identify them. I’ve used watercolour to try out the pigments, but the information is relevant for all media.

What are Earth Pigments?

Earth pigments are colours which occur naturally in the earth. Their colour is determined by the various metal oxides (usually iron and manganese oxide), clays, and minerals that are present, something that is often unique to the geology of a particular location. Earth pigments are extremely lightfast and permanent, making them ideal for artist colours. 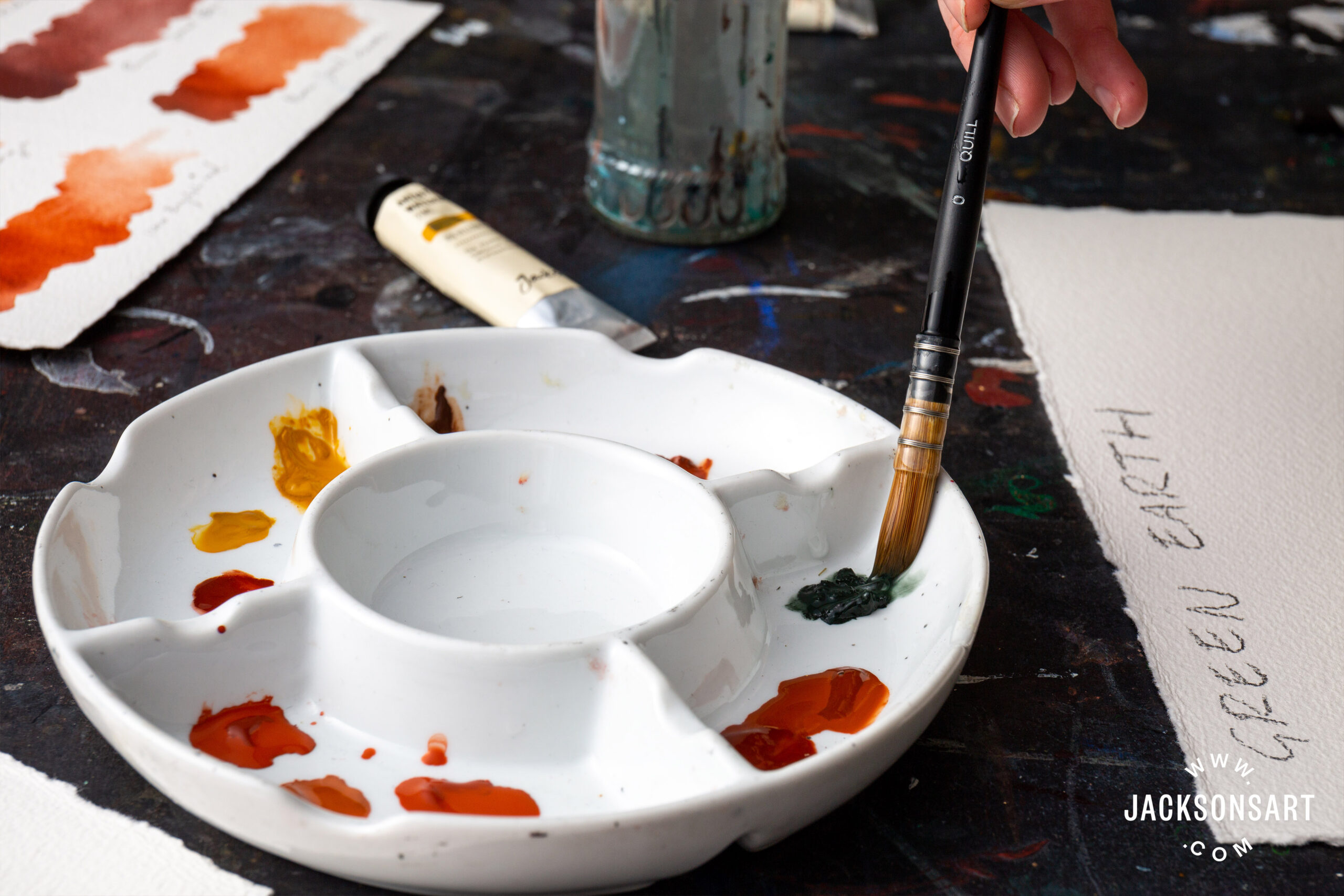 A watercolour palette of earth pigments.

What are Synthetic Iron Oxides?

Synthetic iron oxide pigments, also known as Mars pigments, were first created in the 18th Century, but they began to gain popularity as alternatives to natural earth pigments in the early 20th Century. They are produced by precipitating salts of iron with alum and an alkali, such as lime or potash. Synthetic iron oxides include yellow, red, black, and violet pigments, and the exact formulation and type of iron salt used determines the colour of the pigment. 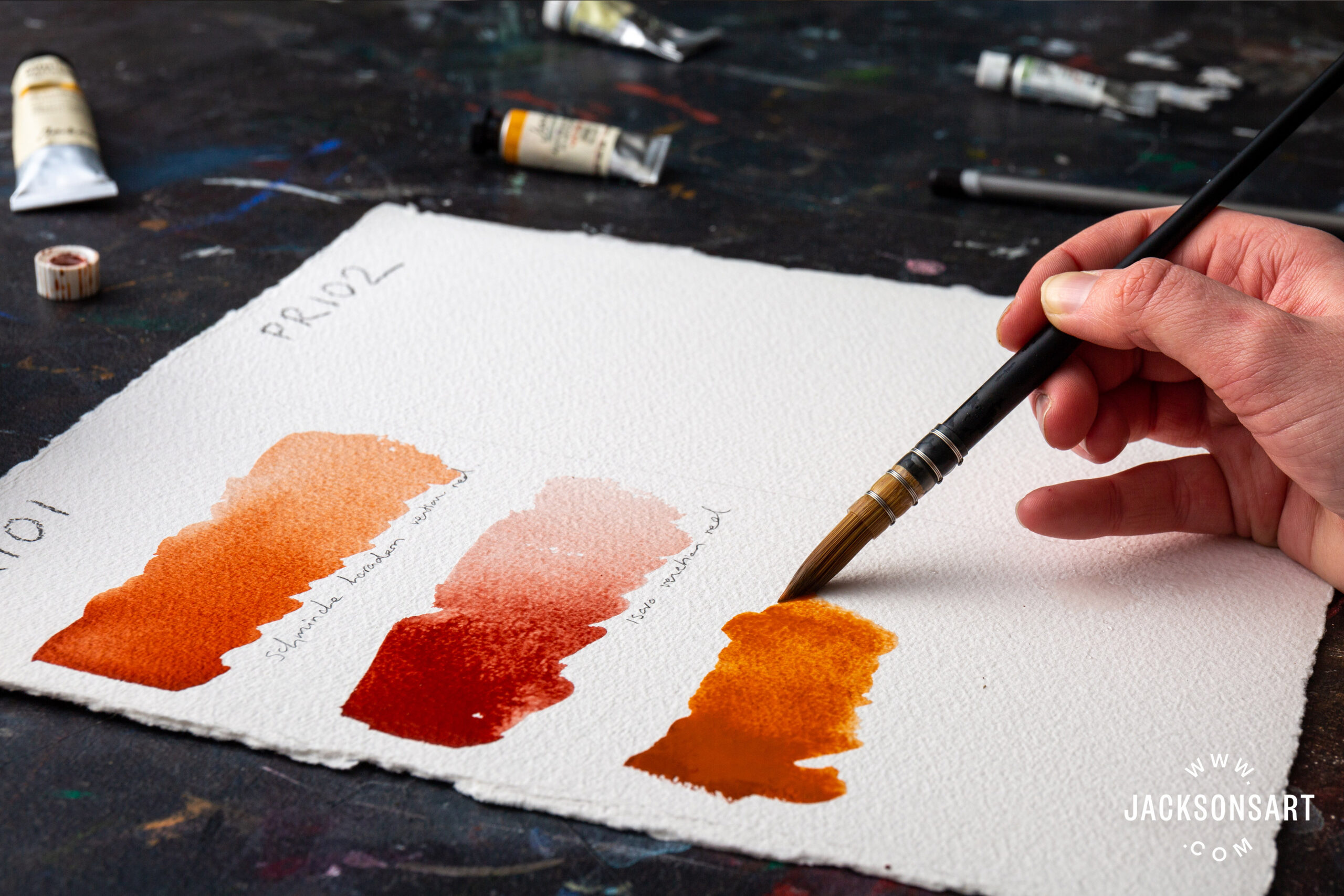 While they are chemically similar, synthetic iron oxides tend to be highly saturated and ‘cleaner’ in colour than natural iron oxides, which can contain naturally occurring impurities. Generally speaking, synthetic iron oxides have a smaller pigment particle size than natural earth-based pigments. This makes them usually higher in tinting strength and, in watercolour, more staining and harder to lift. But because of the huge variation in the properties of both natural and synthetic iron oxides, it’s difficult to make definitive comparisons between the two. But even so, it’s helpful to identify the pigments that are used in artists paints today.

Natural Yellow Ochre (PY43) contains hydrated iron oxide, which gives the earth its golden yellow colour. Natural Red Ochre pigments (PR102) are derived from earths that contain high amounts of hematite, a blood-red mineral. Red and Yellow earths can be found all over the world, and Red and Yellow Ochre can be found in the earliest prehistoric cave paintings. 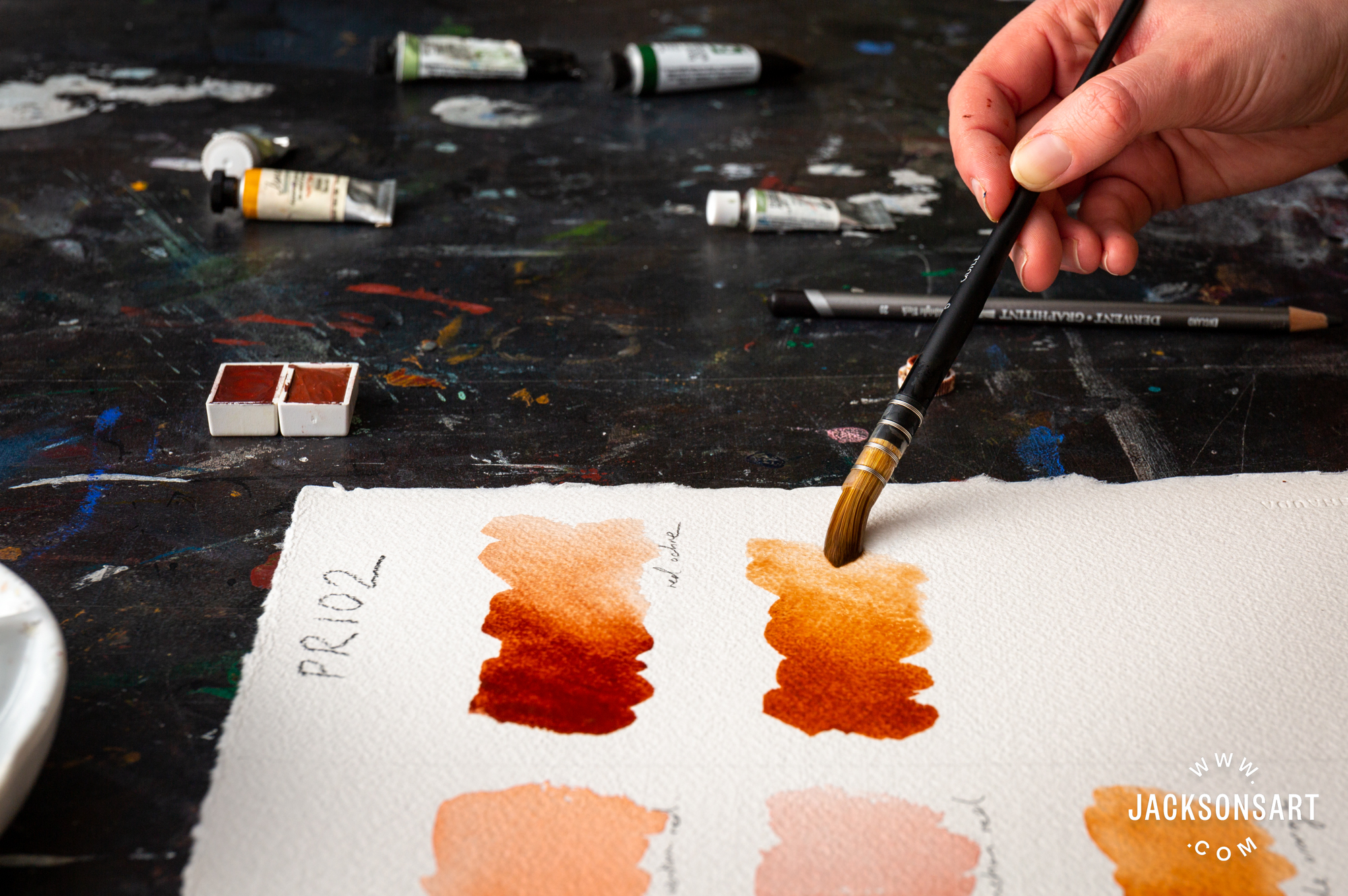 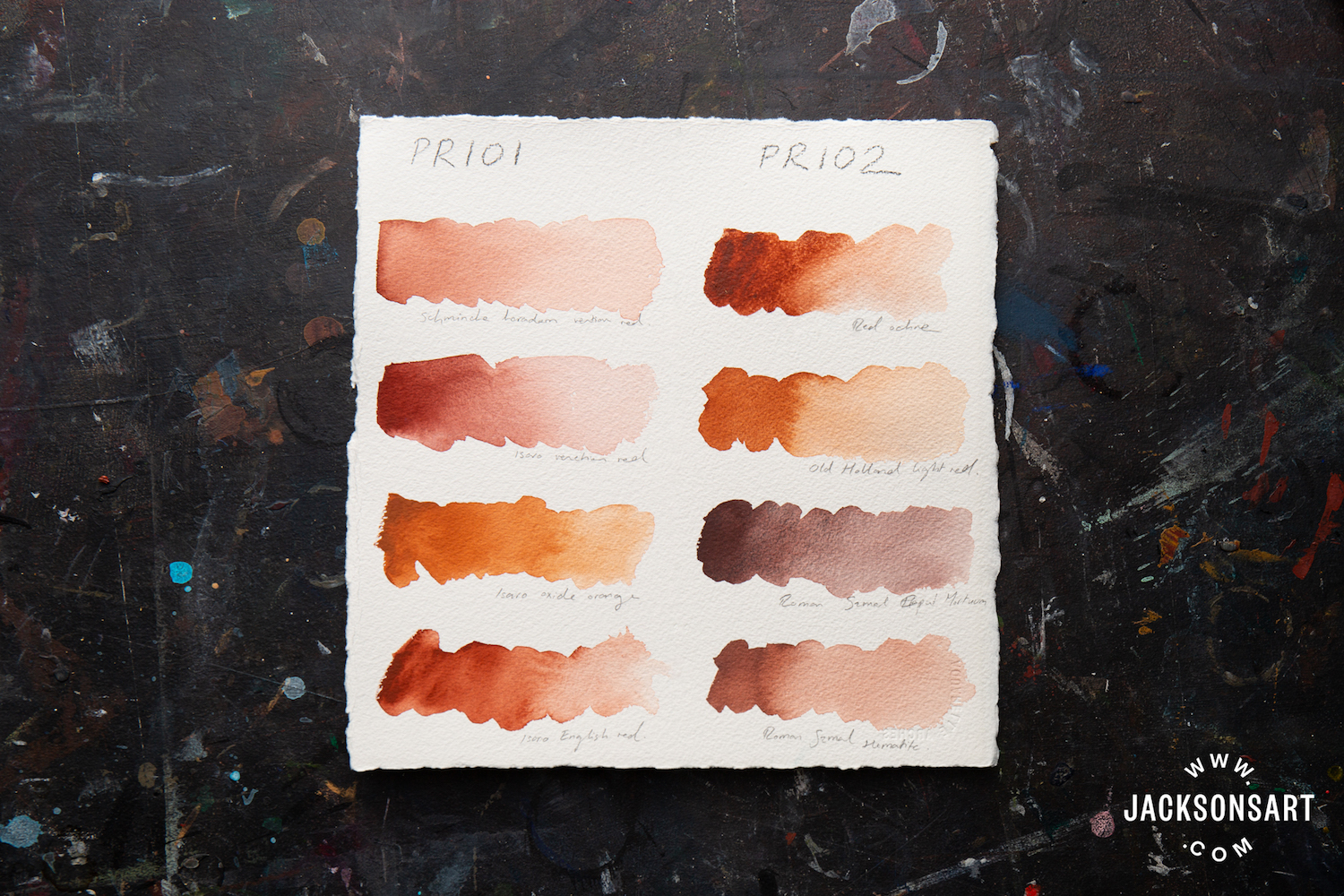 Pigment index number PBr7 broadly refers to pigments containing natural brown iron oxides. These include Sienna and Umber, two of the most commonly used earth colours in an artist palette.

Sienna is named after the city of Siena, Italy. It is a yellow-brown earth pigment that was originally sourced from the Italian province of Tuscany. The colour became extremely popular with artists of the Rennaissance in the 14th Century. Similarly, Umber is named after the Italian region of Umbria where the pigment was originally mined. The presence of manganese in the earth makes Umber darker and more green than Sienna. ‘Burnt’ variations of earth colours can be produced by heating the raw pigment. This process, called calcination, partially converts the brown iron oxides into hematite, a red iron oxide. 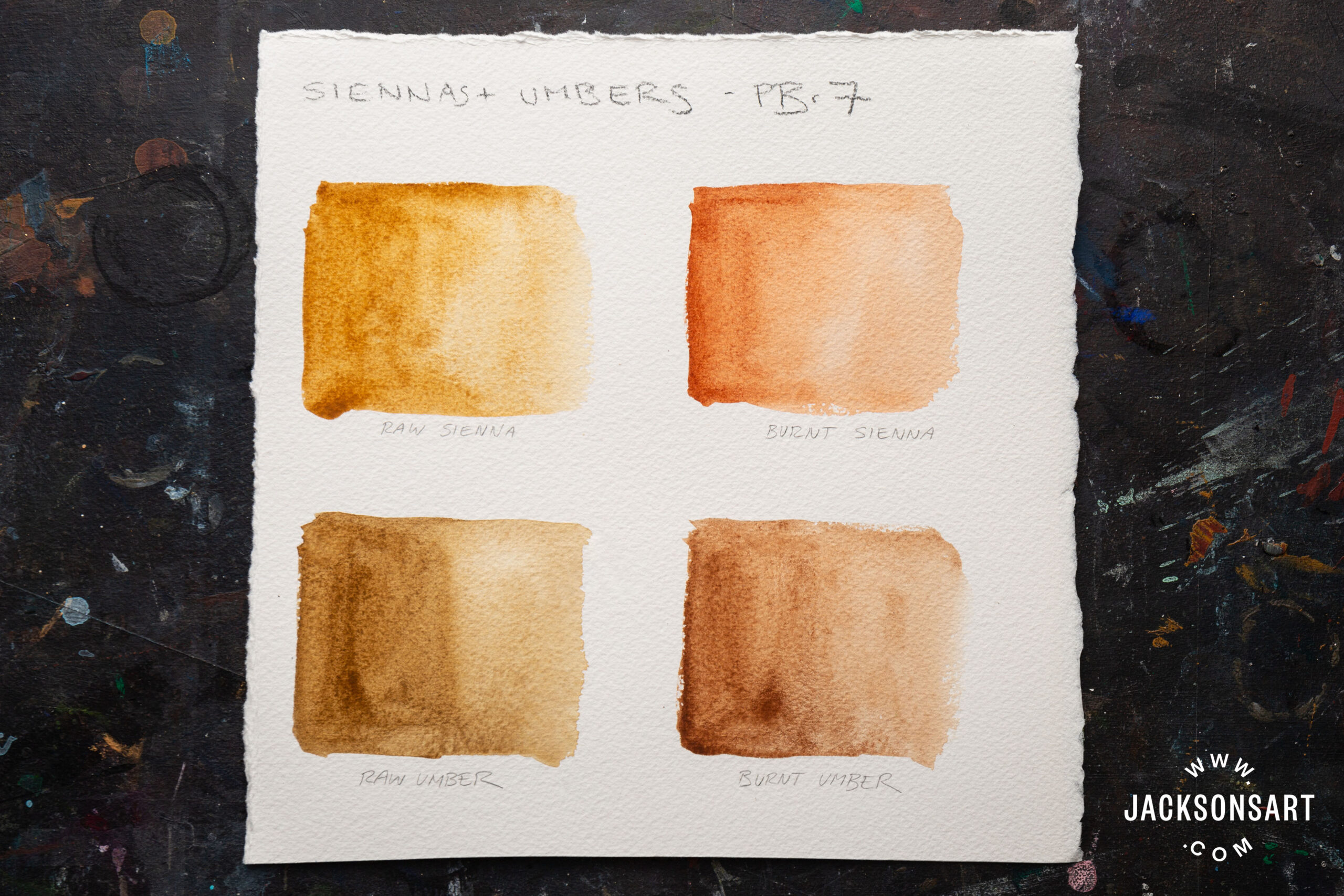 In some Burnt Sienna paints, PBr7 is replaced by synthetic pigment PR101. Raw Umber is sometimes made with PBr6, a pigment made by oxidising synthetic black iron oxide.

Also known as Terre Verte, natural green earths contain silica clay and green minerals. Like the other earth pigments, they have been used since prehistoric times. Most Terre Verte and green earth pigments are very delicate with a low tinting strength that makes them unassertive in mixtures, but they are characterful pigments in their own right and can be used to neutralise red and orange pigments, or in underpaintings for portraits (a technique known as verdaccio, which can help create life-like flesh tones). 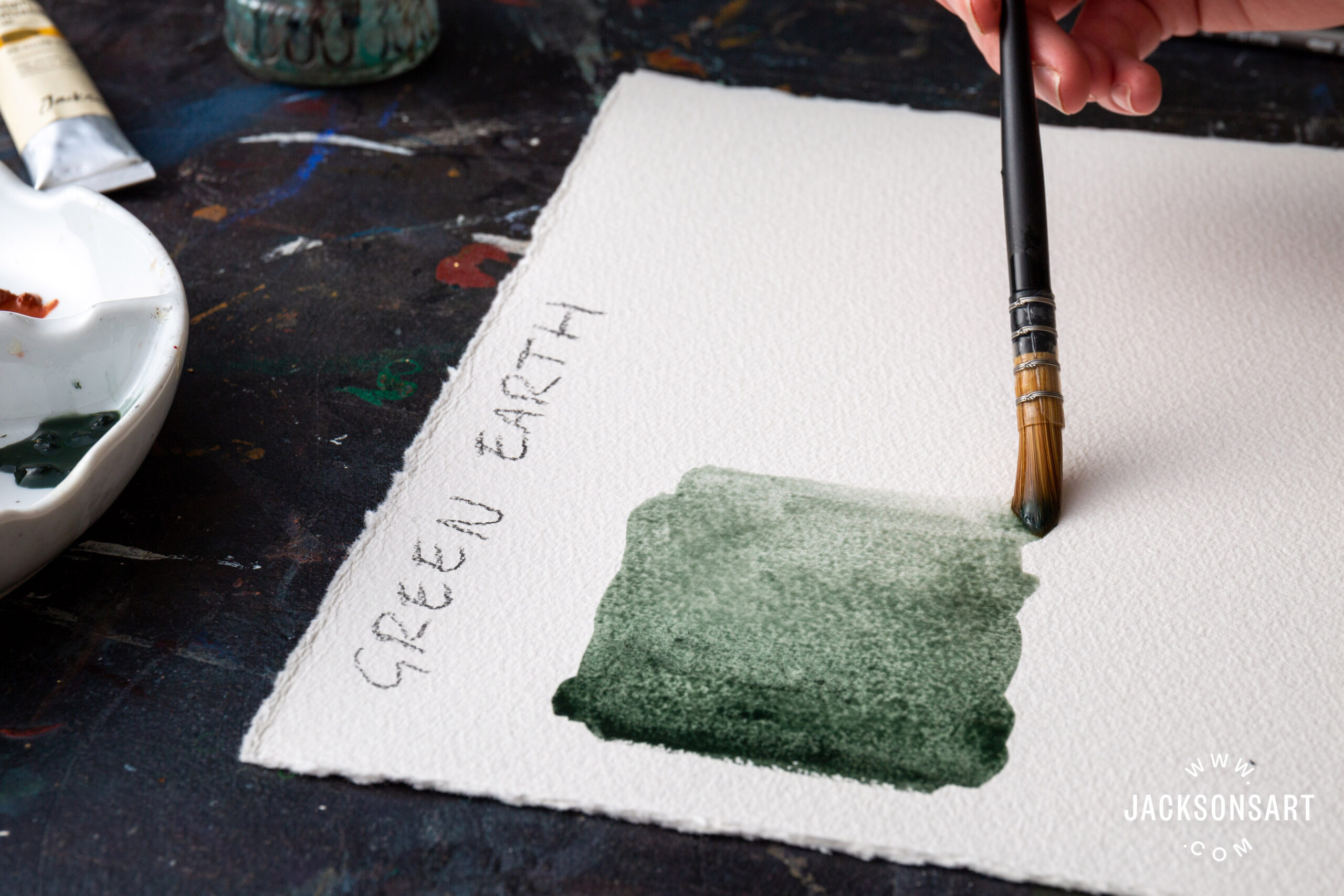 The pigment index number for green earth is PG23. Many paints labelled Terre Verte or Green Earth contain no natural green earths, but rather a mixture of green and brown pigments. 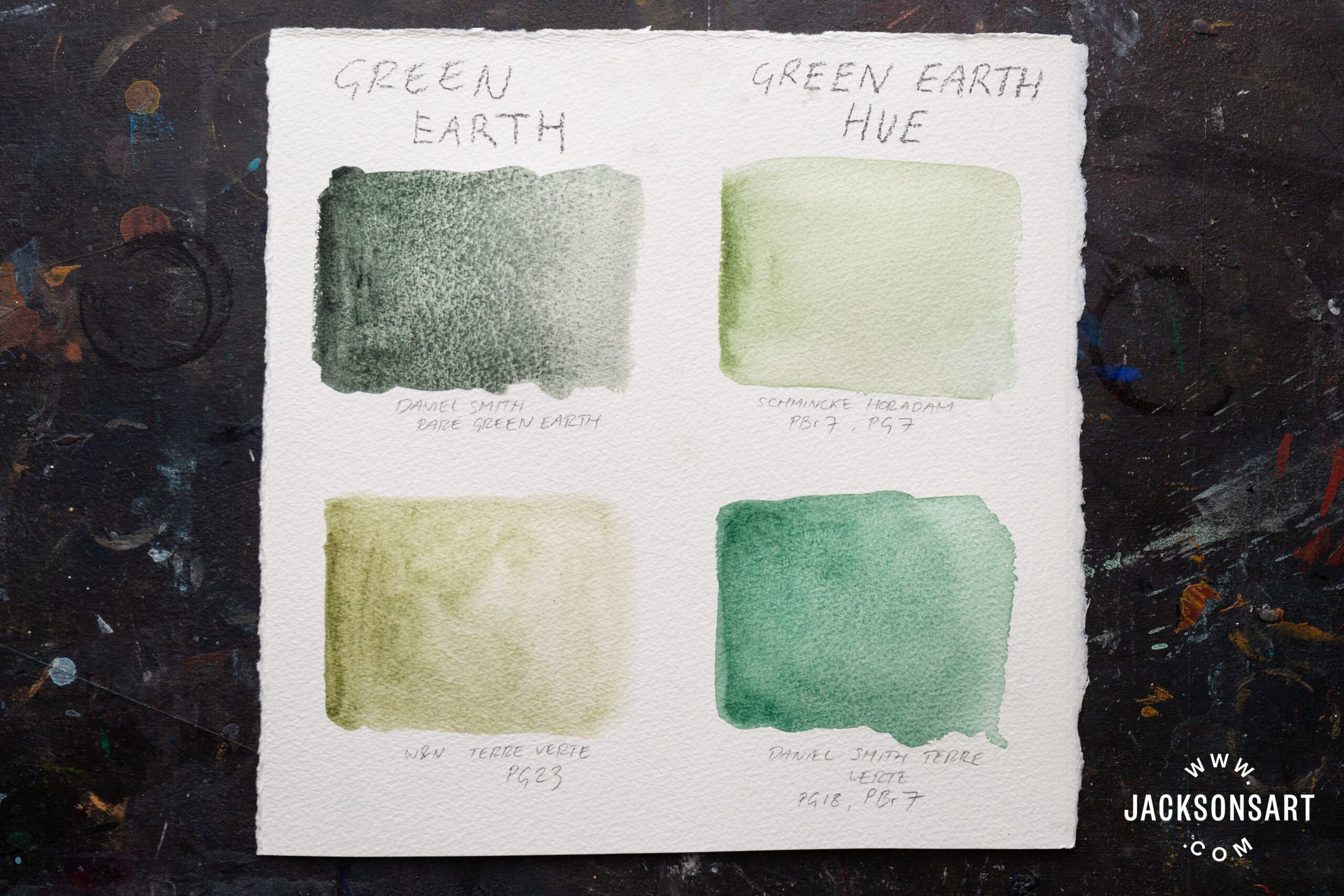 Product ranges referenced in this article:

DECEMBER GIVEAWAY This month one winner will rece