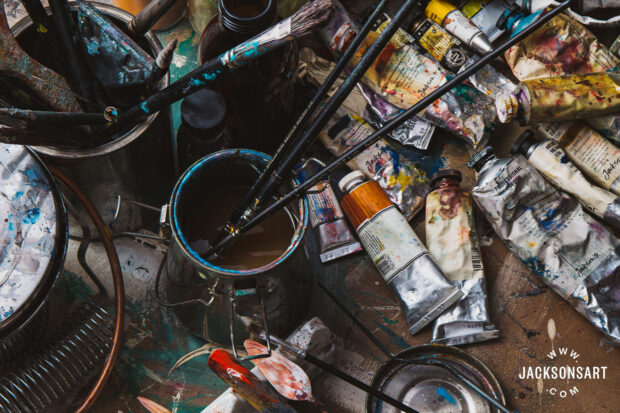 As artists, we encounter a vast amount of terminology while researching and reading about our materials. In this article, we explain the meaning of certain commonly-used words, phrases and terms in the context of oil painting.

‘Alkyd’ is a combination of the words ‘alcohol’ and ‘acid’. In oil painting, it refers to an oil-modified resin treated with these two ingredients. This resin can be found in painting mediums and in ‘alkyd oils’ – ie. oil paints that contain this resin to speed drying time.

A painting approach that involves completing an oil painting in one session, as opposed to completing it in layers applied at different times.

Oil paints stay wet for a long time, which allows for them to be moved around and mixed on the painting surface. You can do this to create a gradual transition from one colour to another, a technique known as ‘blending’.

To add ‘body’ to your oil paint, is to thicken it using a medium, usually a wax or gel medium.

Brush soap is a type of cleanser that is especially formulated with natural oils to moisturise and cleanse brush hairs, so that your brushes keep their shape and hairs for longer.

Oil paints in quantities above 225 ml are sometimes packaged within a cartridge, a rigid cylindrical tube, which will require a cartridge gun dispenser to squeeze the paint out.

Ready made oil paint contains two main ingredients – pigment and ‘drying oil’. A drying oil is a natural oil that oxidises when exposed to air, causing it to harden into a solid layer. Linseed oil is the most common drying oil used in oil paint manufacture (although there are others), and the quality of it is instrumental in the quality and handling properties of the paint – the highest quality linseed oil will be clearer and less likely to colour over time.

This rule dictates that oils should always be painted in a certain way to ensure the longevity of your painting: put paint with more oil (or fat) over the top of paint that has less oil in it (more diluted with solvent). This is due to the fact that oil paints ‘dry’ differently to other paints. Instead of evaporating like water-based paints, the oil in oil paint reacts with air causing it to solidify – this process is called oxidation. In the meantime the solvent in the paint does evaporate. While the evaporation of the solvent doesn’t take very long at all, the oxidisation process is very slow and never really stops. As oil paint oxidises it goes through an expansion and contraction process. If anything that dries faster is put on top of not-sufficiently-dry oil paint it is likely to crack.

The word flow refers to how mobile the paint is, and how easily it transfers from the brush to the canvas or surface. Mediums can be added to increase flow. 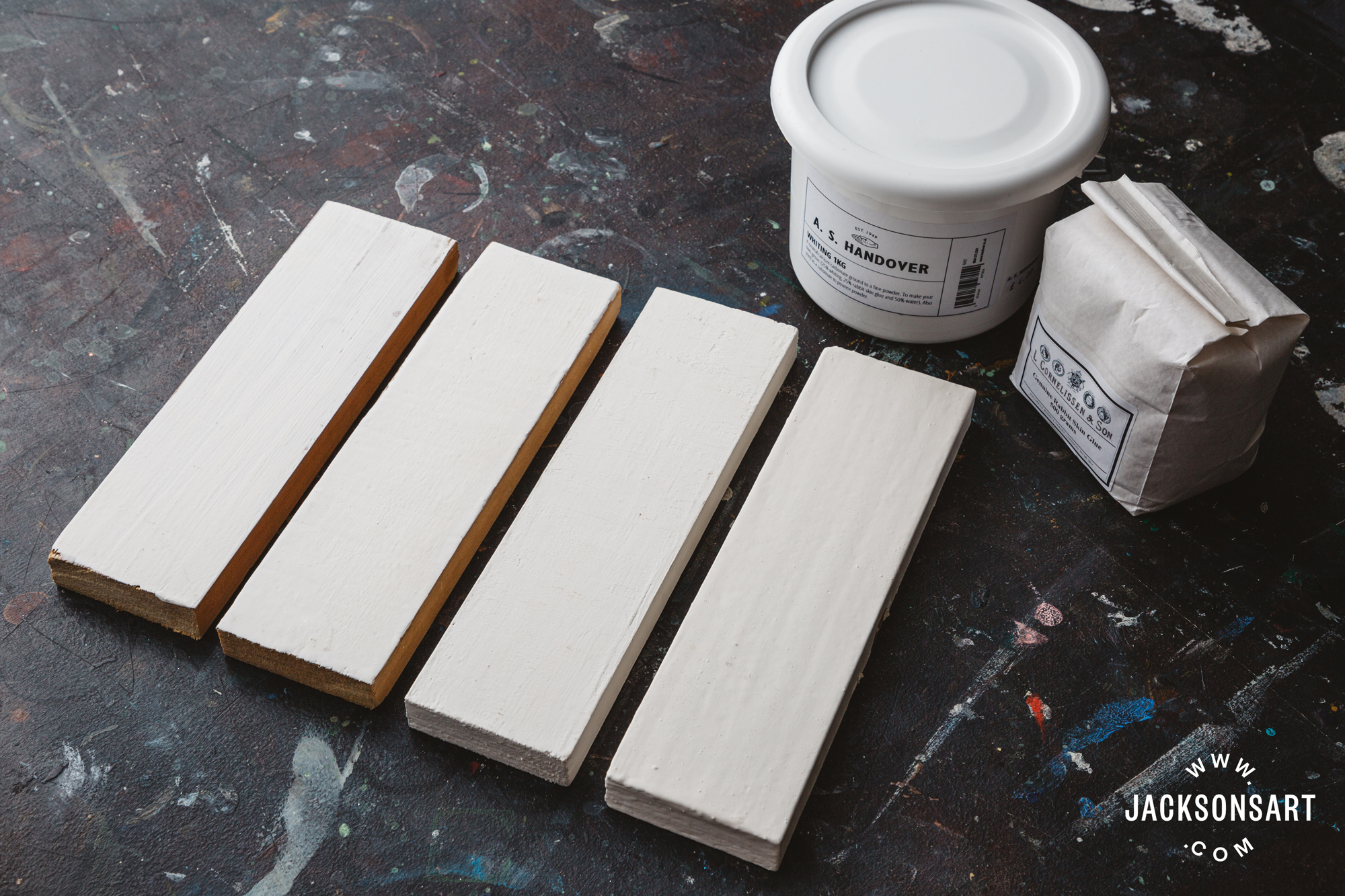 The term ‘gesso’ is often used for all types of primers and grounds, because it was the original. But technically it only refers to the traditional mixture of hot animal glue and gypsum or chalk, applied in many thin layers to wooden panels while warm. Since many people call acrylic primer ‘gesso’, the glue type it is often called genuine or traditional gesso.

The application of a thin layer of translucent paint over a more opaque layer.

A surface that is shiny when dry is said to be gloss. Some oil paints appear more gloss than others depending on the size of pigment particles and their concentration. A final gloss finish can be applied with varnish. There are three surface sheens: gloss, satin and matt.

A term often used to describe a prepared surface ready for oil painting. The word ‘ground’ could refer to anything from a primed piece of canvas to an aluminium sheet. 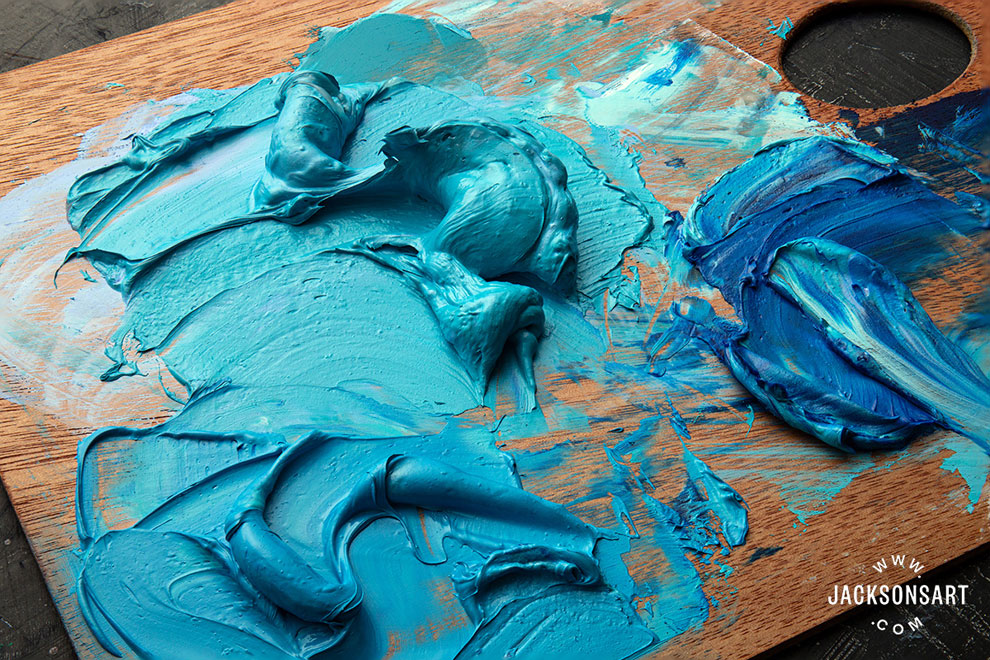 Impasto medium For oil painting made with beeswax

A term to describe paint that has been applied thickly, often straight from the tube or with a medium added to thicken it.

In Italian ‘imprimatura’ means ‘the first layer’. In painting it refers to a thin transparent layer of colour that is laid on to a ground evenly in order to colour it. The layer is thinned with solvent or with a fast drying medium. It is then left to dry before the actual painting of the picture begins. Many artists will leave patches of the imprimatura layer showing through in their work. It is an alternative preparation to a tinted or coloured ground, where the primer is mixed with a colour prior to application to a support.

An additive that is mixed with paint in order to extend the colour or alter some of its properties such as consistency, texture, transparency, drying time, flow and sheen.

A format of oil paint, it is a mixture of pigment, oil and wax moulded into a stick form. Considered as either a drawing or painting medium, they can be used directly on a prepared surface. Oil sticks dry like oil paint – it is not the same as an oil or wax pastel.

Oxidisation (in relation to ‘drying’)

Oil paint doesn’t ‘dry’ like other paints. Instead, it hardens as the oil oxidises (a chemical reaction with air). This is different to watercolour, for example, where drying is caused by the water content of the paint evaporating.

Permanence takes into consideration the effects of other elements on the stability and appearance of pigments , including humidity, light, heat, water, acidity, alkali levels etc. The permanence of a paint will be indicated on the label using a rating system determined by the manufacturer and explained in the manufacturer’s colour chart or on their website. Be aware that some artists and manufacturers use it as an equivalent to ‘lightfast’. 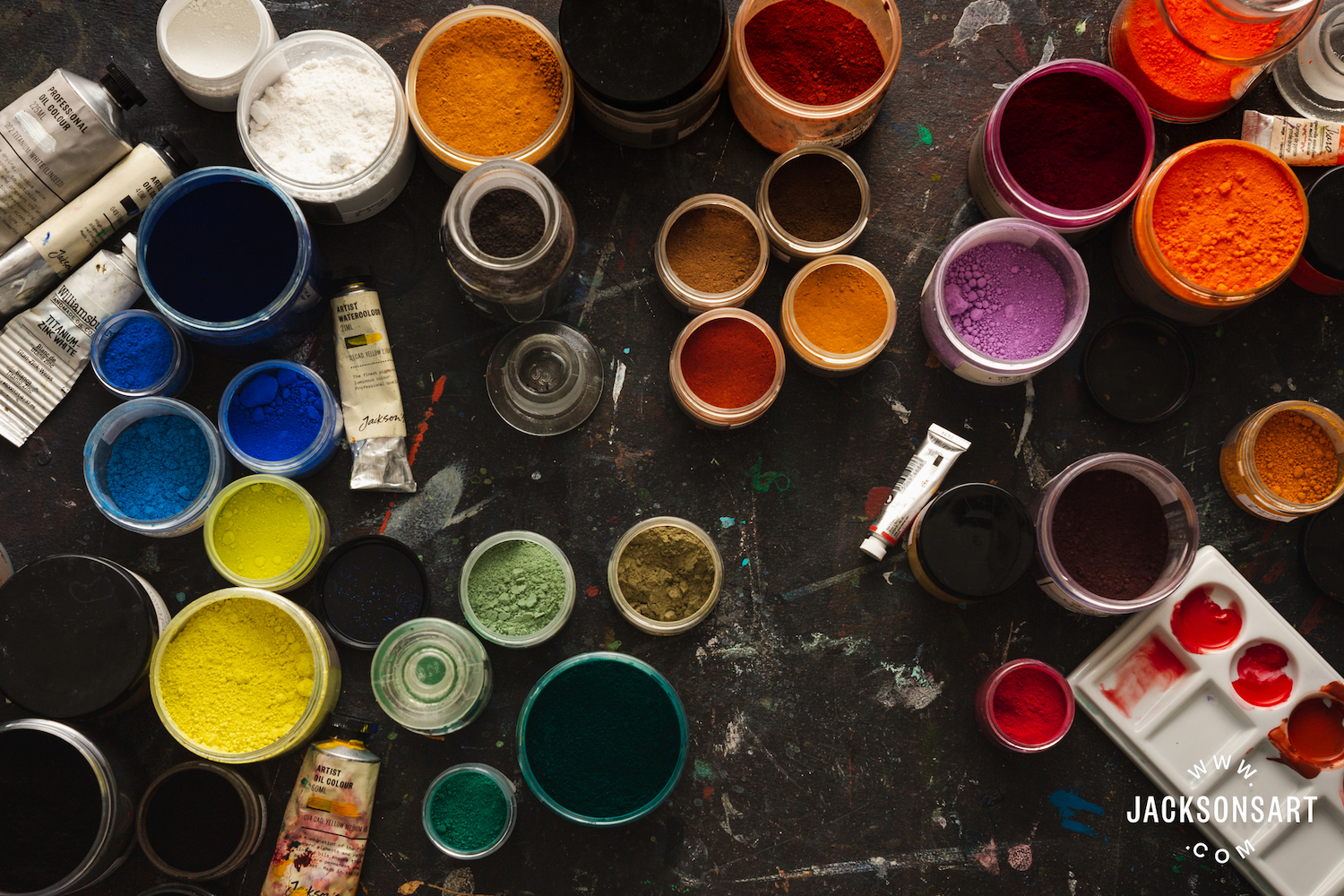 An array of pigments

A pigment is finely ground colour made either in a laboratory or from naturally coloured rocks. Pigment is one of the two main ingredients of oil paints, along with drying oil.

A surfacing material used to coat a surface to get it ready for paint application. It is a glue that sticks well to your surface, better than your paint would. It acts as a middleman between the surface and the paint which is applied over the top, so that your paint is well adhered.

Rabbit Skin Glue is a traditional glue used as a sealant on canvas and wood panels before applying gesso or a primer, or to be painted on directly with oil paint.

When the oil in the top layer of oil paint is absorbed into the layer underneath, so that the top layer is left with insufficient oil binder, those parts of the painting can appear dull. This can happen due to an over-absorbent surface, using too much solvent, or not using enough medium with lean colours, like earth colours.

A size is a glue that seals the surface to reduce absorption. On canvas it prevents oil paint coming into contact with the fibres which would slowly be damaged by the oil.

Petroleum or turpentine based diluents that are used to thin paint and/or clean brushes and as ingredients in oil painting mediums.

Oil paints are made using finely ground pigment particles suspended in drying oils, usually linseed but sometimes pale colours are mixed with poppy, safflower or walnut. They are buttery in consistency, their characteristics can be altered or enhanced by adding mediums, and may require solvents to clean them from brushes.

The measure of how much light is able to pass through an applied paint and interact with the surface beneath. Transparent paints appear more luminous on a white support because they allow a larger proportion of light to hit the surface they’re laying on. Opaque paints block this reflection from occurring, and can be used to cover layers of colour underneath.

The initial layer of paint on a painting.

Water-mixable oil paints offer the charm of traditional oils with the added advantage of not requiring solvents for either thinning or the clean up operation. As they are water-based, there is no need to deal with the fumes of solvents, as it’s much safer and easier to clean up with soap and water.

Everything You Need To Know About Oil Painting Paper

A Guide To Oil Painting Mediums

Annie contributes regularly to the blog with features and material reviews. Her background is in publishing and she has written for a number of creative magazines. She is also a practicing artist with an interest in natural history.