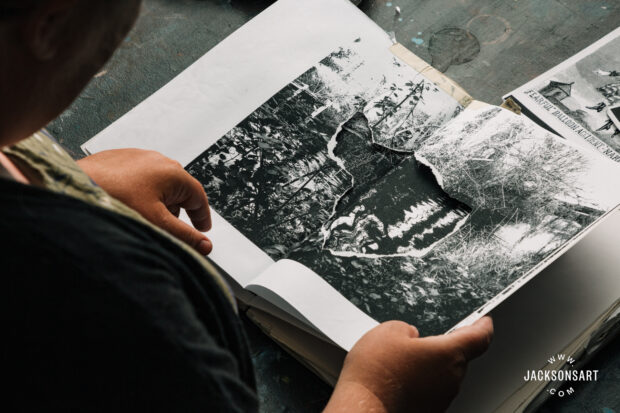 Inside the Sketchbook of Juliette Losq

Juliette Losq is an artist whose practice subverts the traditional use of watercolour through scale and complexity both in her paintings and installations. Her sketchbooks are packed with imagery and ideas that she gathers, cuts into, tears through and paints over, on the journey to develop her final compositions. Here, Juliette discusses her process in detail and shares her practical approach to making the most of her sketchbooks. 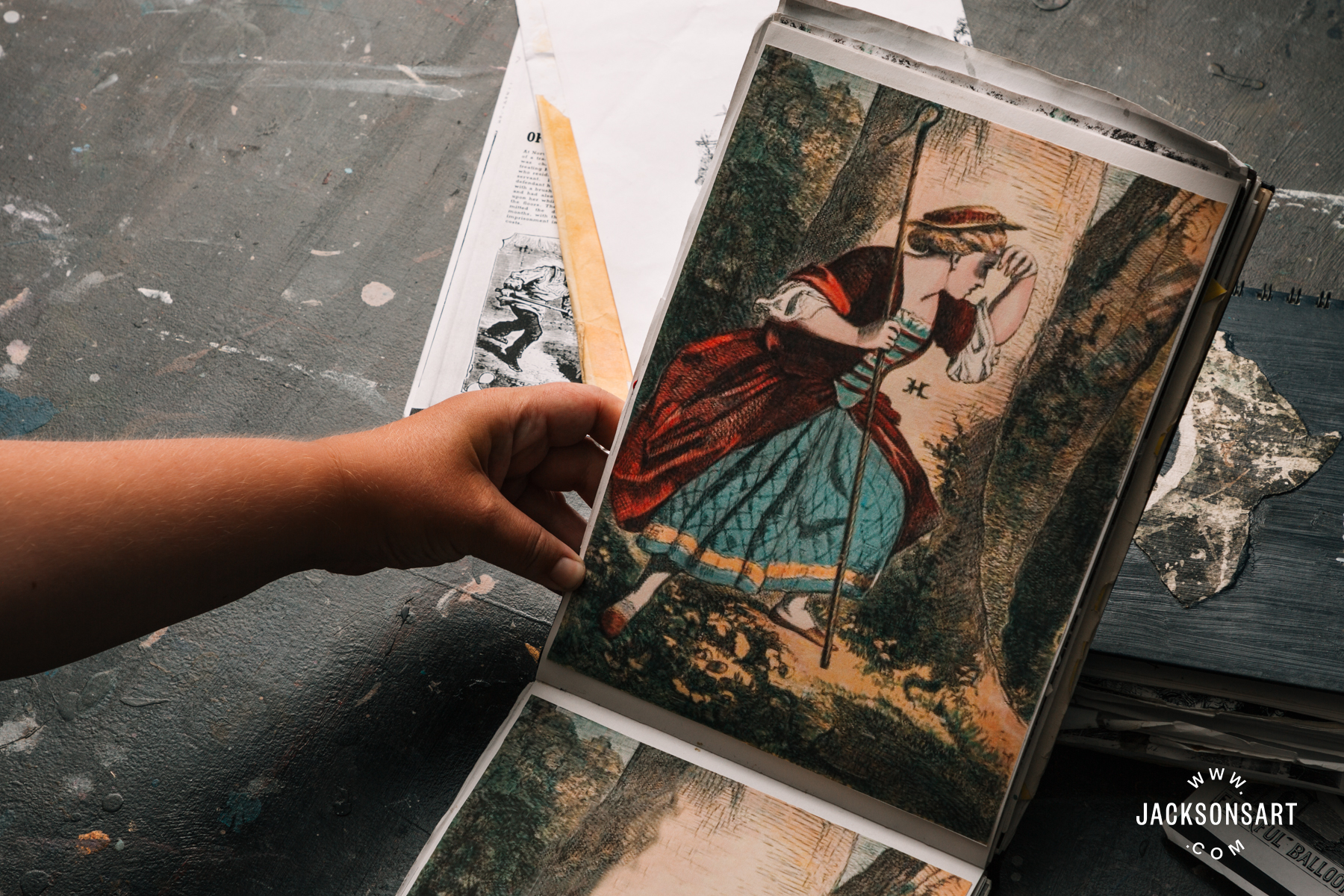 Juliette Losq Takes Us Through Her Sketchbook Practice

Sketchbooks for me, are a combination of a journal and a scrapbook. I collect paper and ephemera from journals and magazines dating back to the nineteenth century. I acquire these from eBay or from bookshops. I tend to be drawn to Victorian illustrations, woodcuts and optical toys. I’ve also collected photography magazines from the 1930s and 40s – anything that contains images that interest me visually in some way. Often, I don’t know until I’ve bought an item what its full content is. Sometimes I include the whole item within my sketchbook or photocopy the relevant images. I might erase from images, so that they become unpopulated landscapes. Removing the figures turns the landscape into a kind of empty set. Occasionally, these figures reappear as hidden characters within my work, who may or may not be discovered by viewers. I also make alterations to historical images, to reflect the contemporary landscape, for example, or to suggest an alternative narrative to the one originally presented. 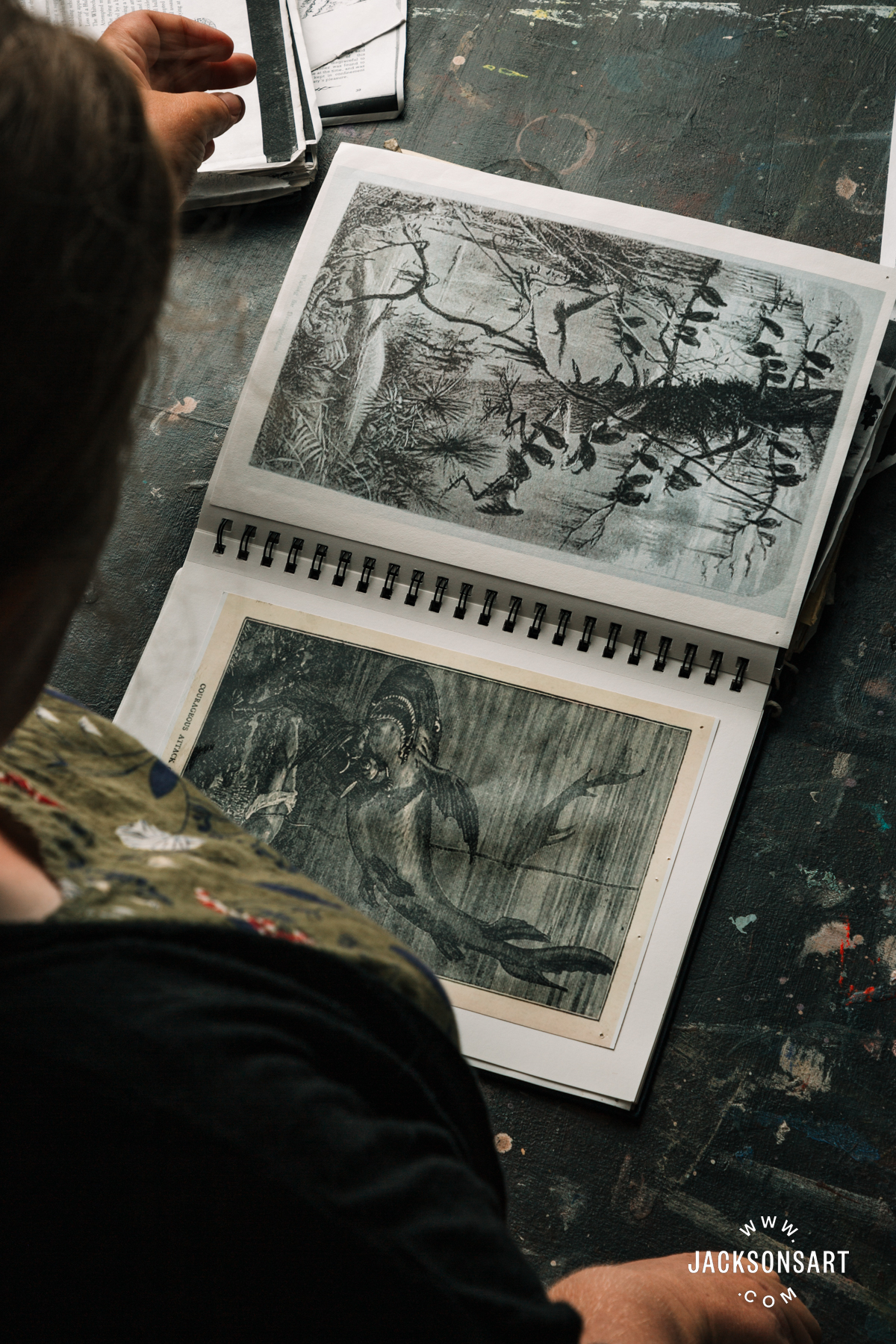 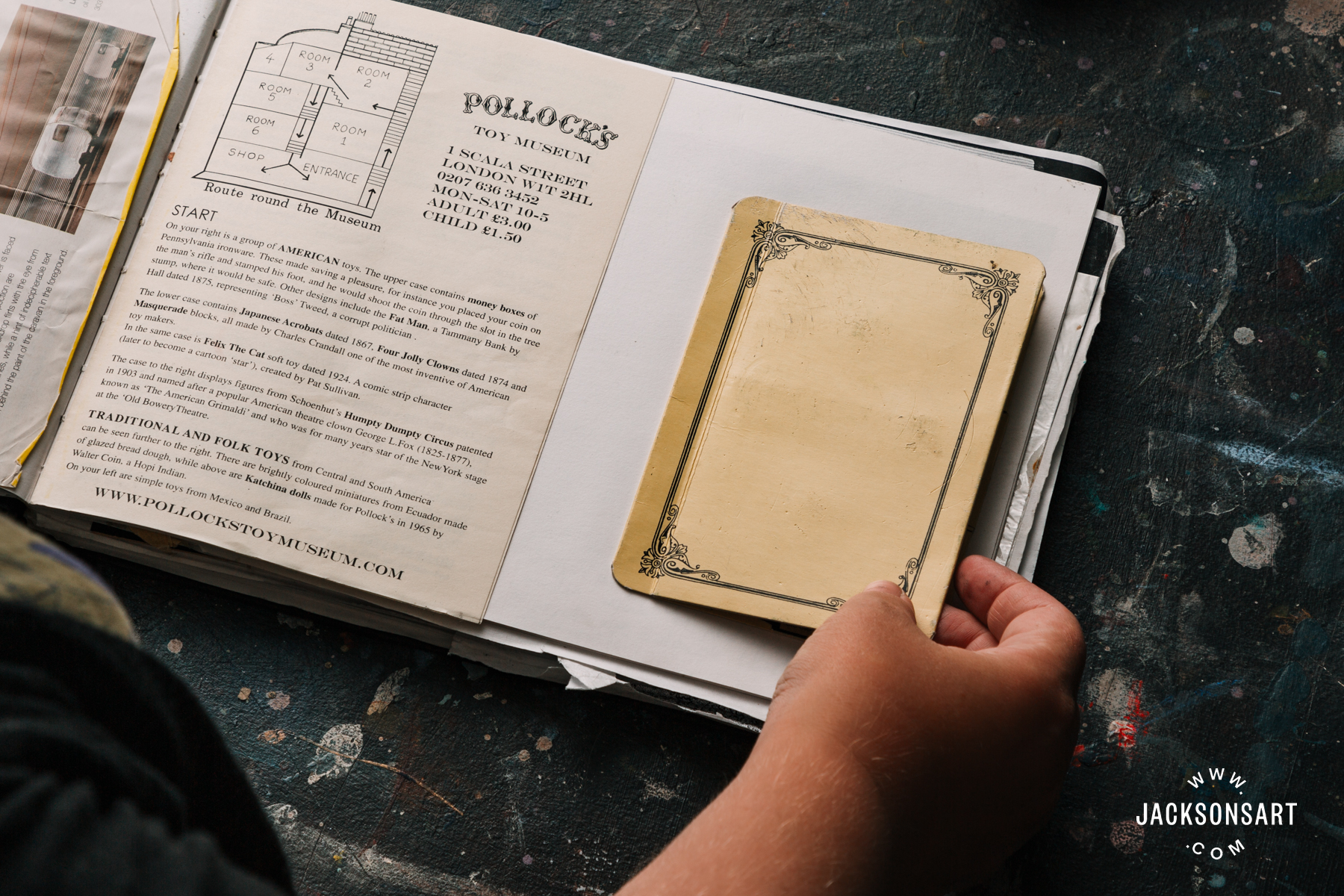 I also keep photographs from current magazines that might be of interest in terms of suggesting future compositions. If I come across the work of an artist I like in a magazine or online, I cut or print this out and use the sketchbook as a way of storing it. I’ll make notes on sketchbook pages of any recommendations I’ve been given by other artists, of shows to check out or books to read, for example. 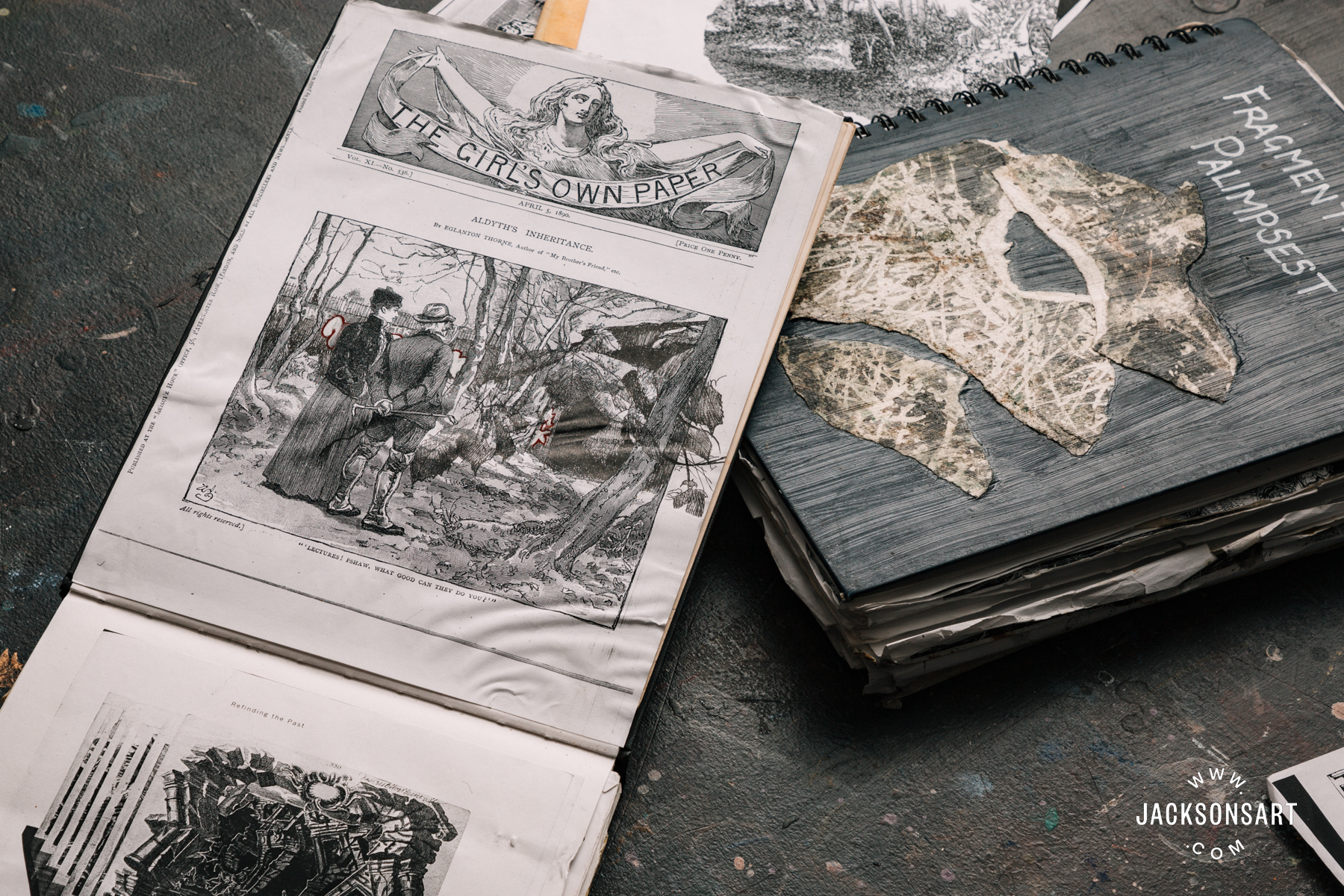 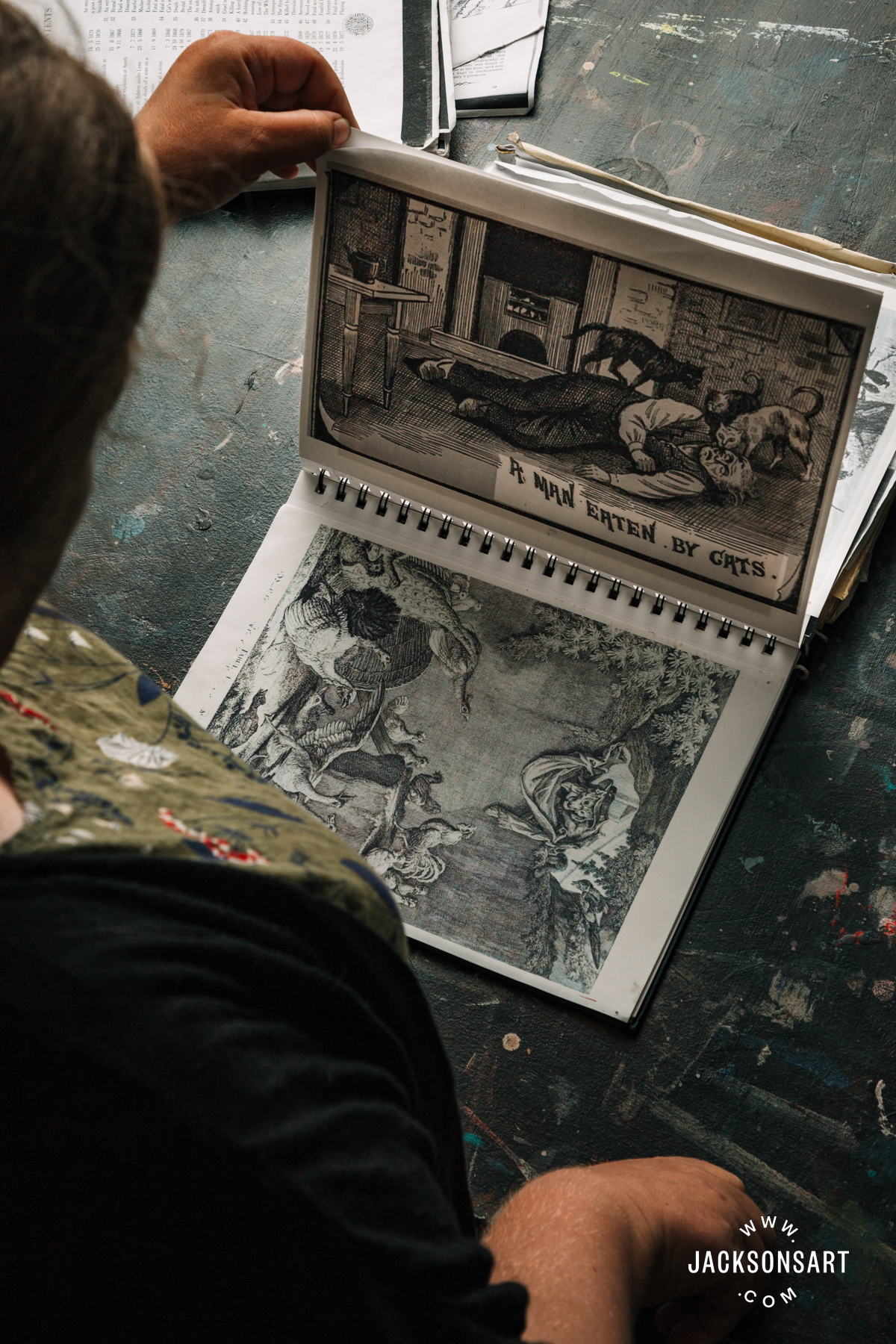 Occasionally I’ll use a sketchbook to group images together. For example, I’m interested in rococo forms and the way they stylise and exaggerate natural forms within the landscape. I might juxtapose these with my own collage compositions, exploring visual connections between the two. 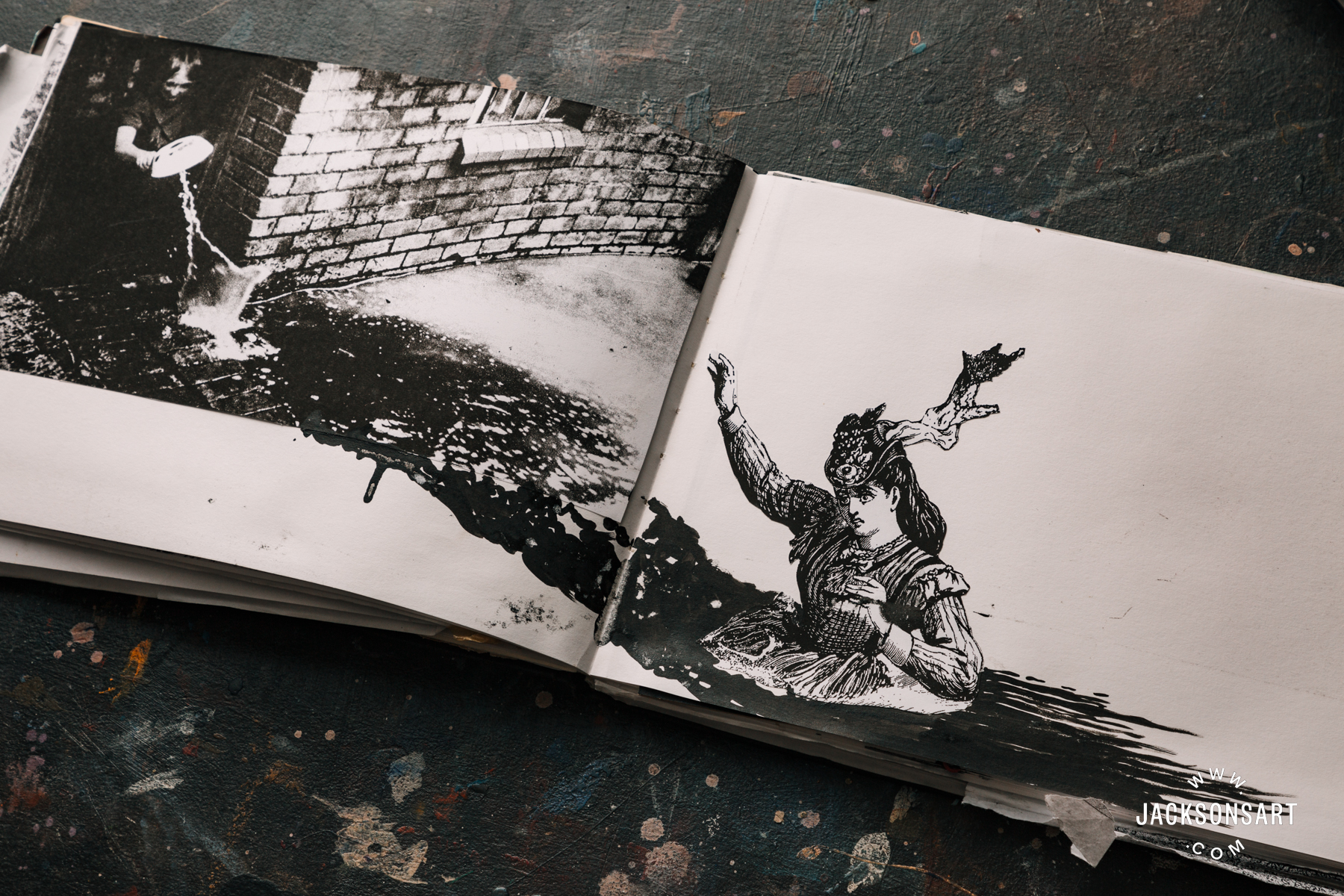 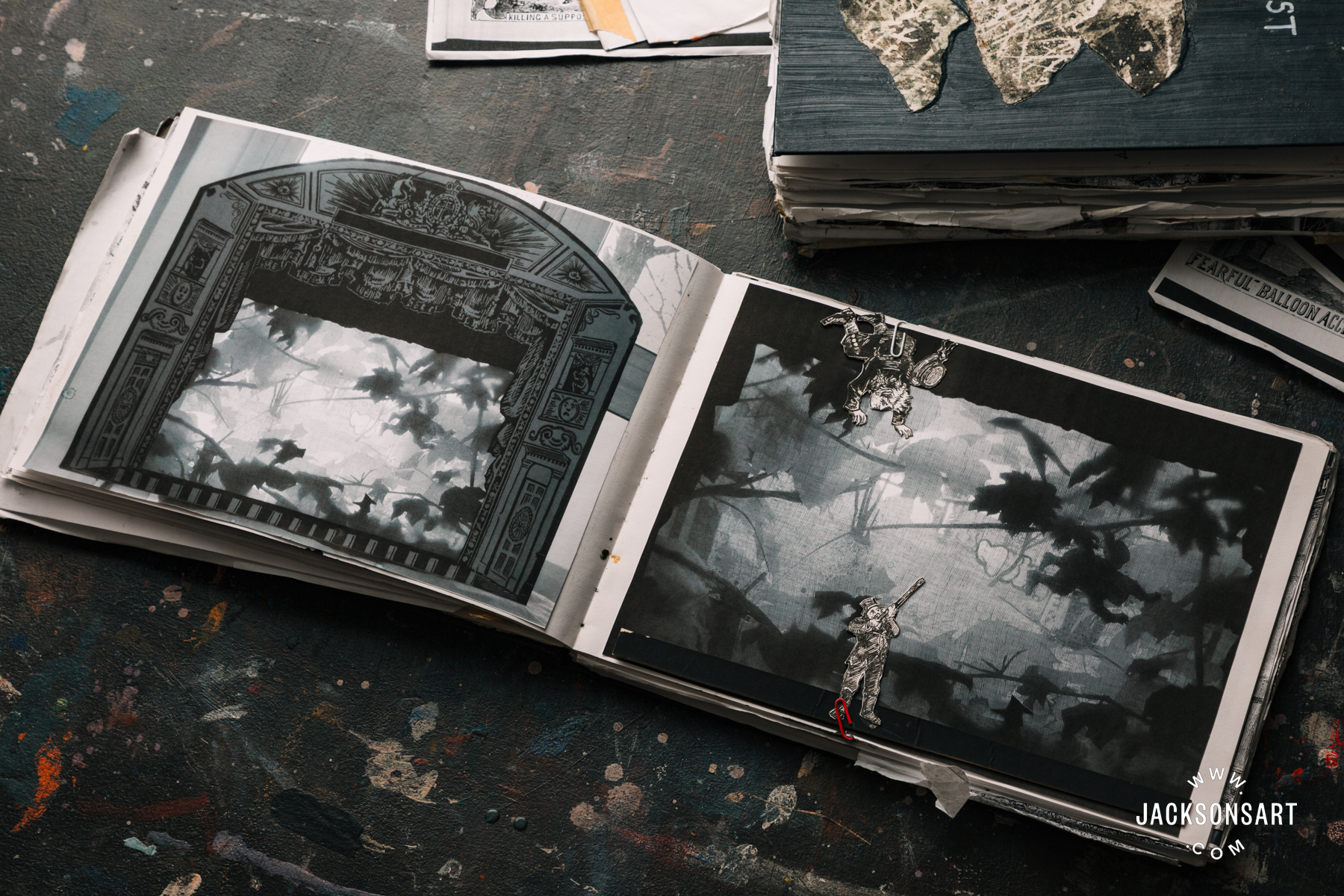 I tend to favour an A4-A3 sized sketchbook with a hard cover, as this size is large enough to accommodate most ephemera that I collect. The hard cover is a good way of protecting the contents. I occasionally work directly into the sketchbook to draw, so I favour a fairly heavy paper as this leaves the option to work with wet materials as well as glueing and collaging into it. 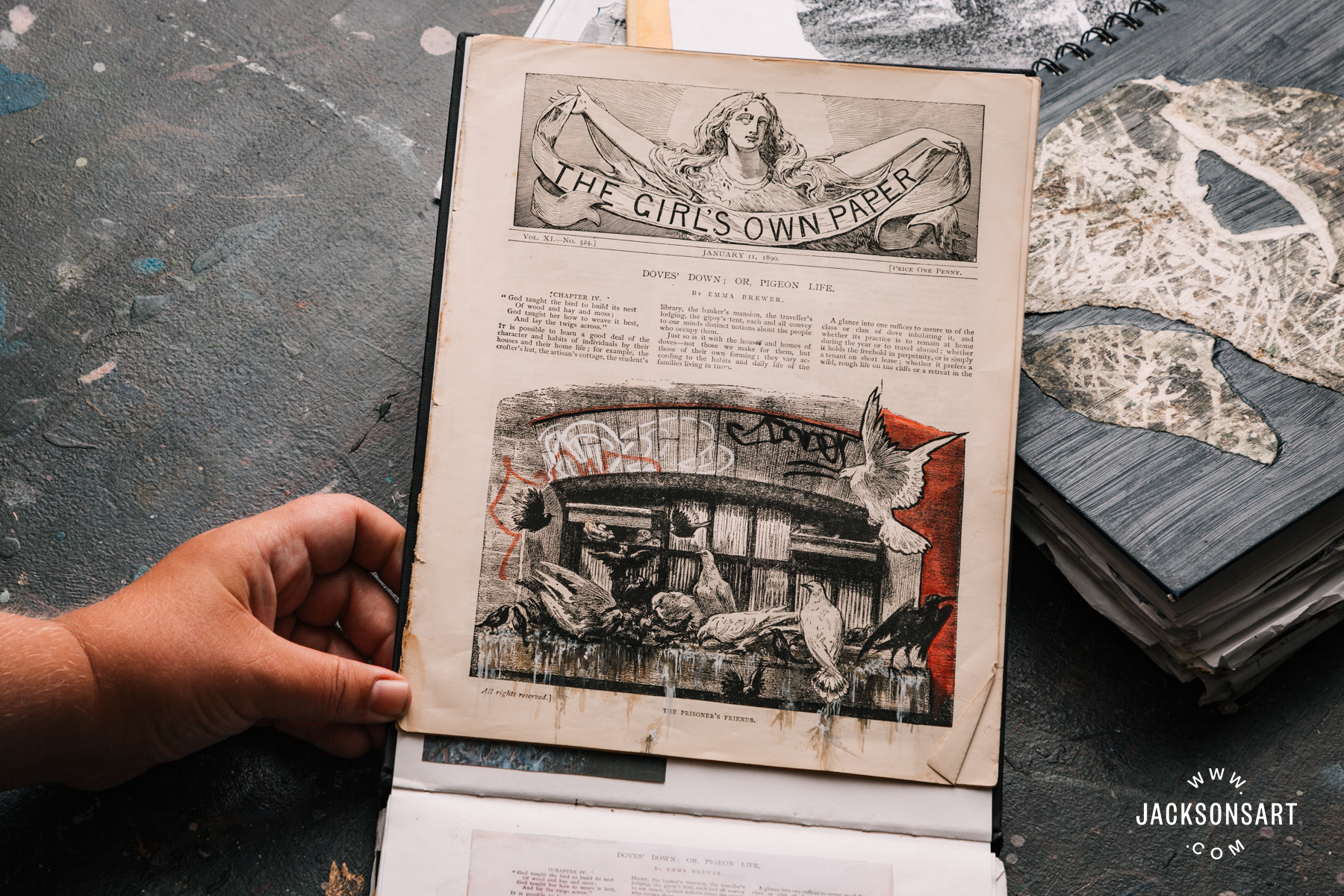 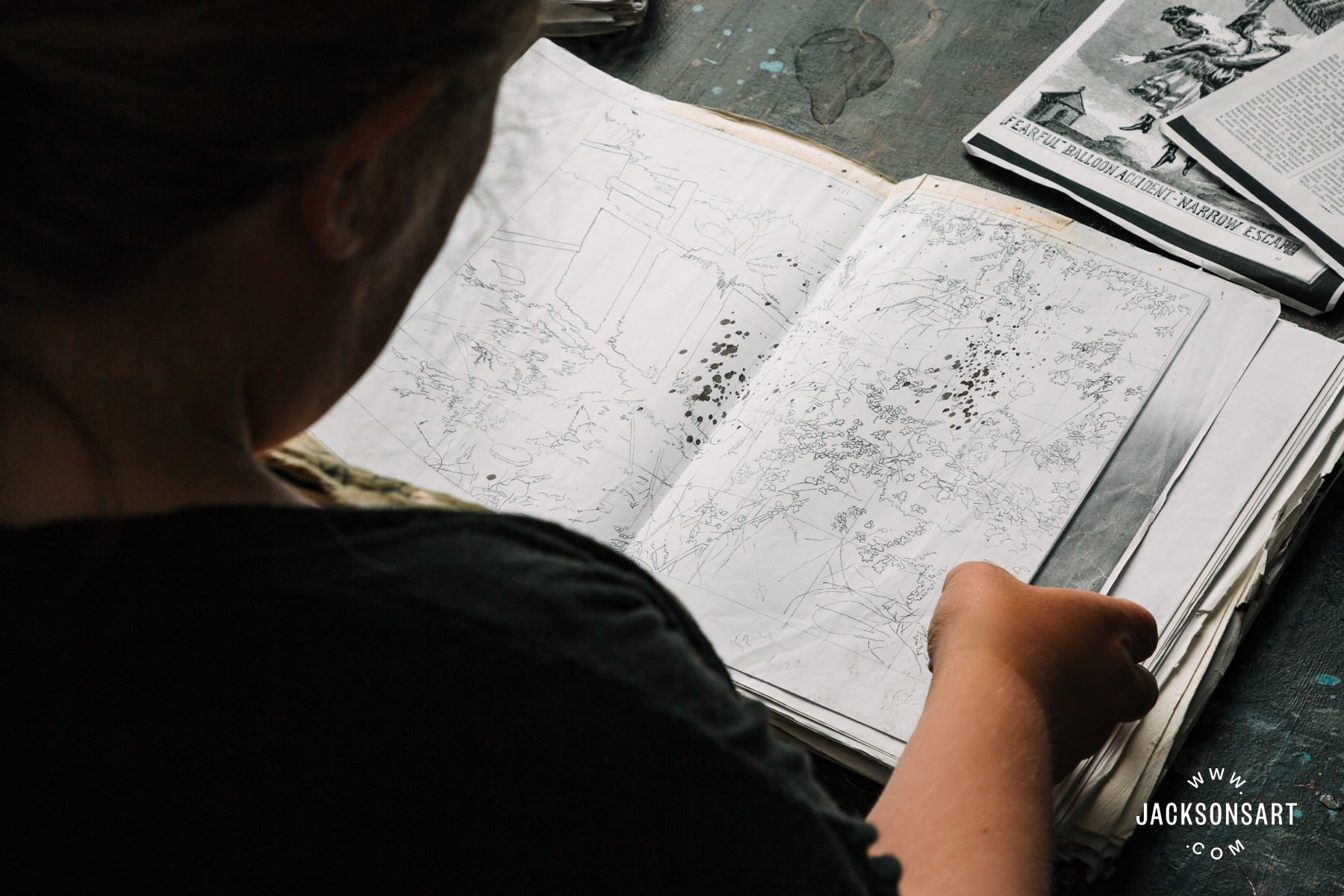 Other than collected materials that are pasted onto the pages, historically I have worked with fine liner and/or watercolour and ink. These materials allow me to sketch ideas out quickly, or to jot down notes to refer back to. I tend to use Sennelier Ink and Winsor & Newton Indian Ink. I use Winsor & Newton or Cotman watercolours. 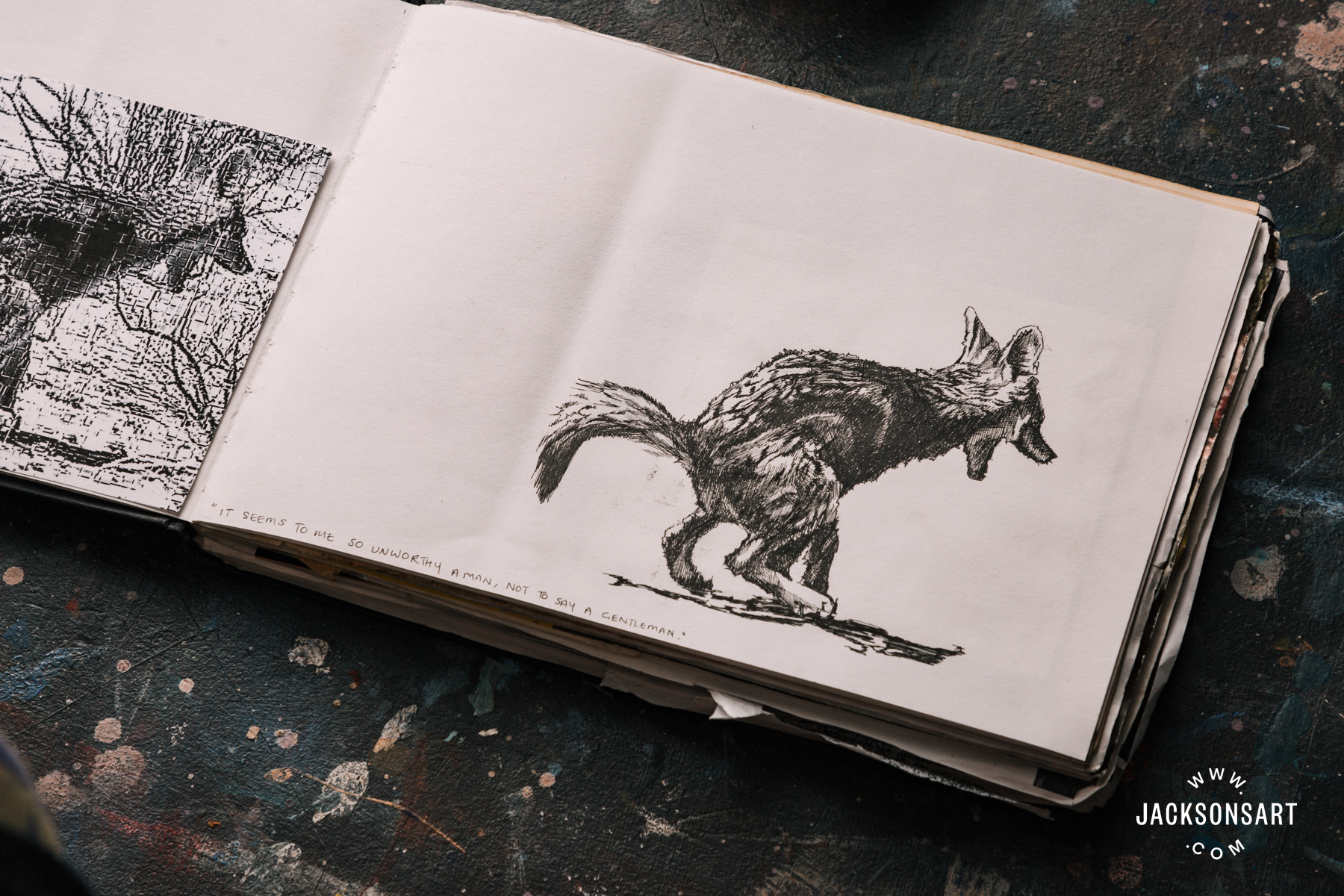 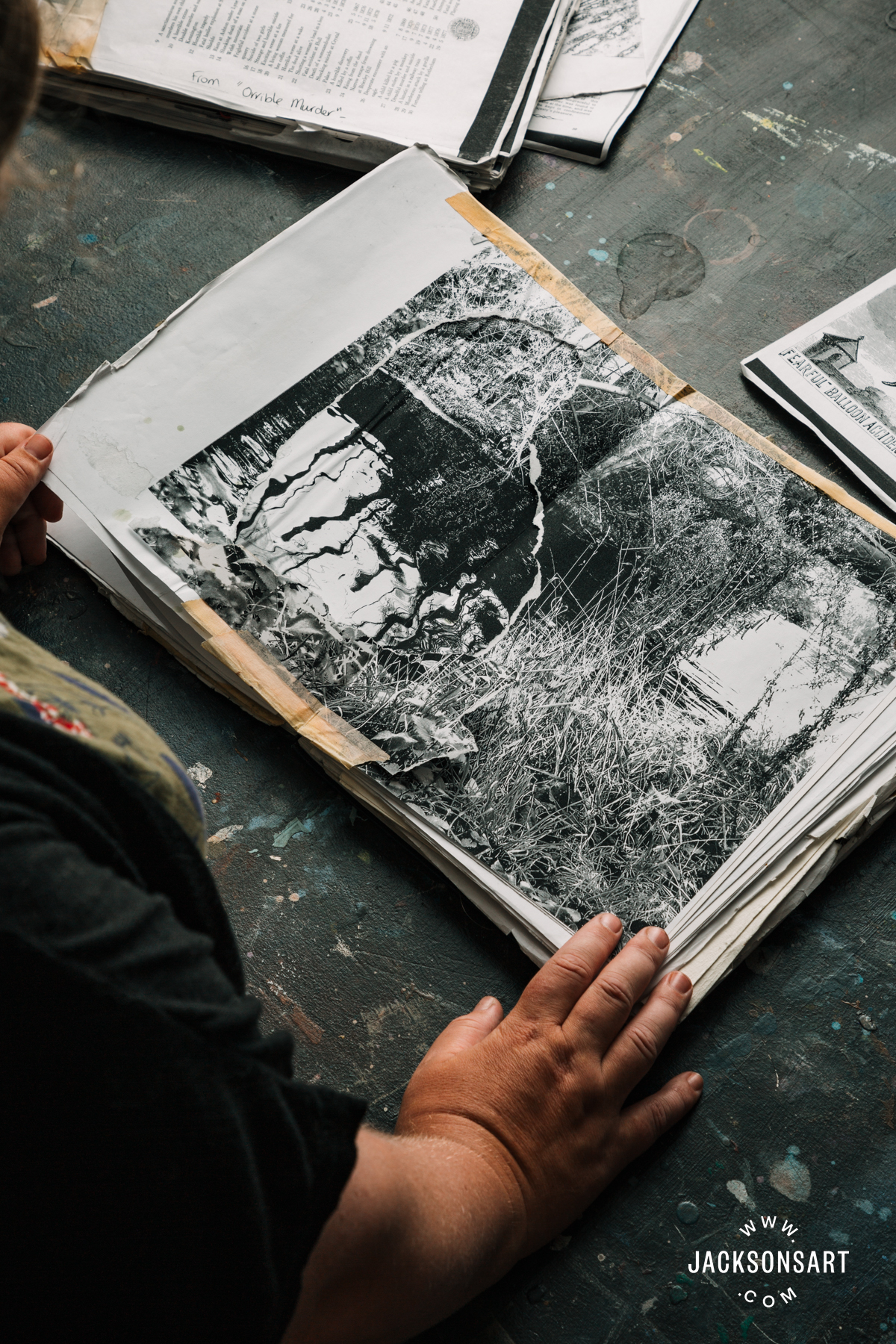 I use sketchbooks to collect resources that I might refer back to a number of years later, so there is really no sell-by-date for a sketchbook, and I am still referring to one that I began in 2007. I probably refer to notes, plans or images in one of my sketchbooks weekly. For this reason I tend to keep them to hand, on a shelf in my studio. 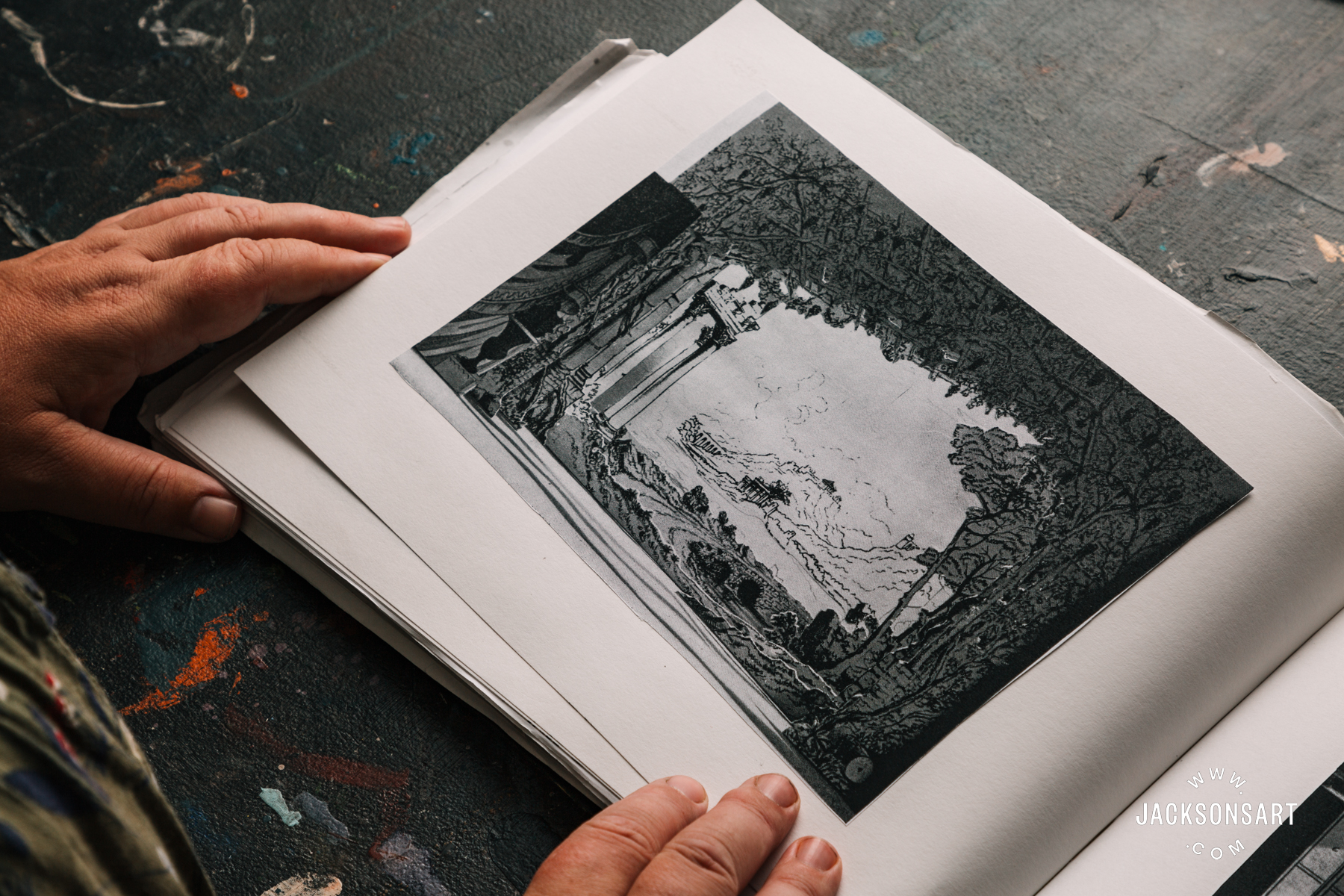 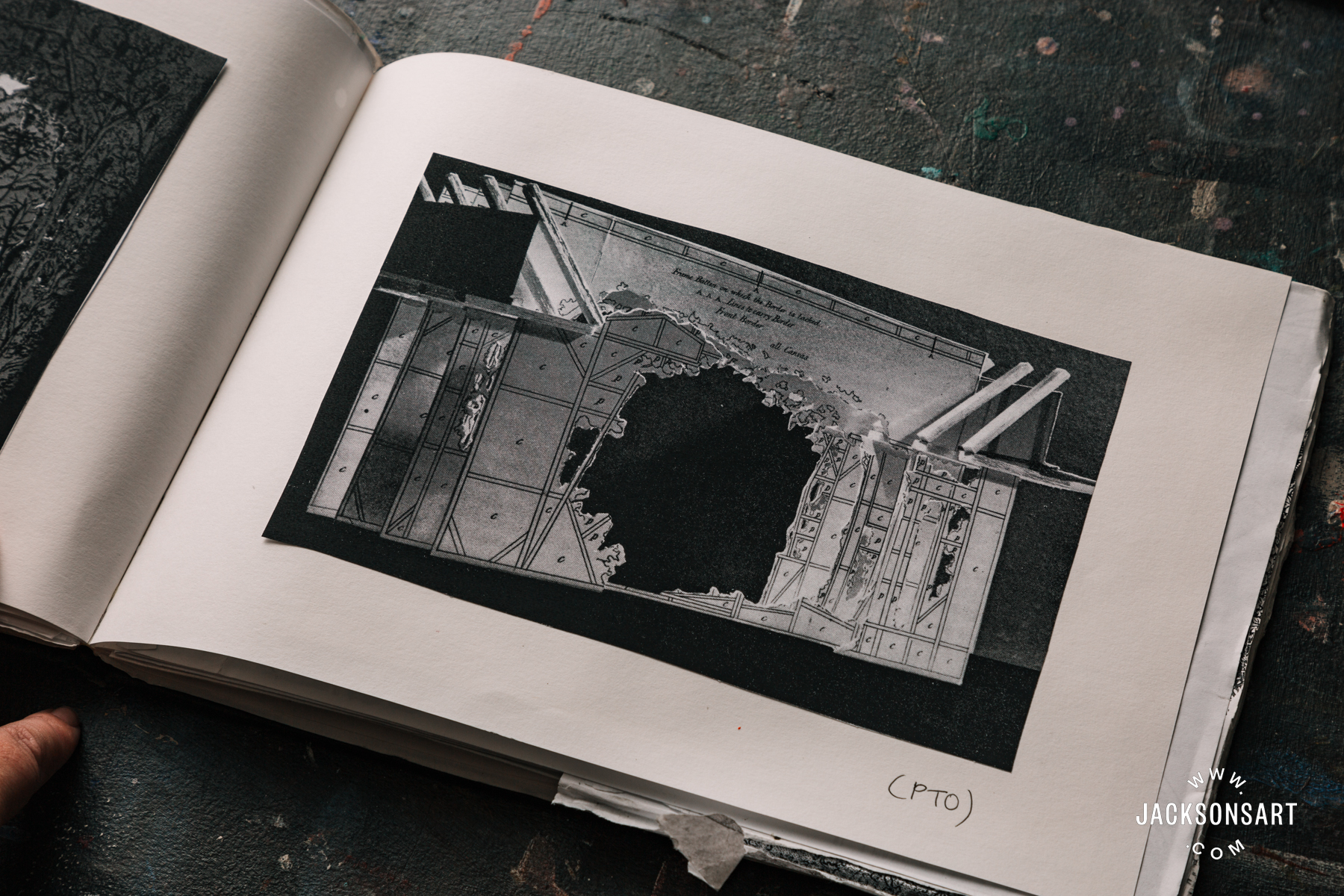 I often make plans for installations in sketchbooks, roughly drawing initial ideas or storing floor pans and SketchUp designs in them. I grid images up, make a note of dimensions, and include an overall plan for how they will ultimately come together. I can then take the book to the site and refer to it whilst I am installing. 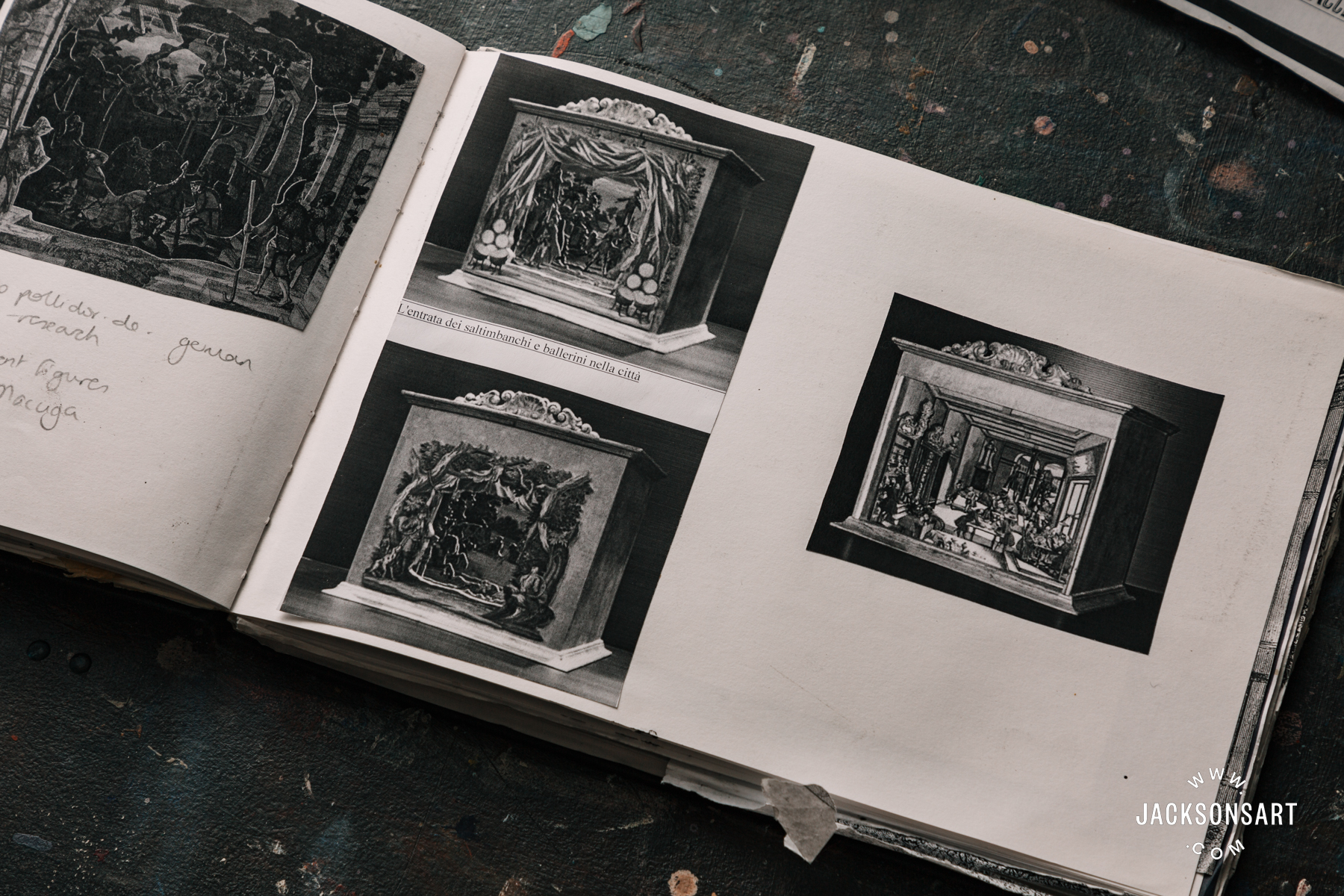 For me, a sketchbook is a contained go-to place for useful information. Whilst it is not always stored and referred to in chronological order, I have a good grasp of which sketchbook it is in and how it sits in relation to the information around it in that book. So, it is always relatively easy to find. Often, when browsing a sketchbook, I come across an idea or an image from several years ago, that might then form the basis of current work. Recently I found an image of a paper peepshow that I collected when I was on my BA at Wimbledon College of Art between 2004 and 2007. I’d forgotten all about it, but this image features prominently within my current PhD thesis, so it is almost like I had been carrying it around in my mind for all that time – as though somehow having it physically pasted somewhere has embedded it within my consciousness. It’s also interesting that I’ve developed an installation practice, particularly over the last five years, that refers visually back to devices like this. Although I’ve felt like this evolved organically from previous paper installations, it seems like, again, these images were burnt into my visual memory, and have been waiting for a chance to be recalled and used. 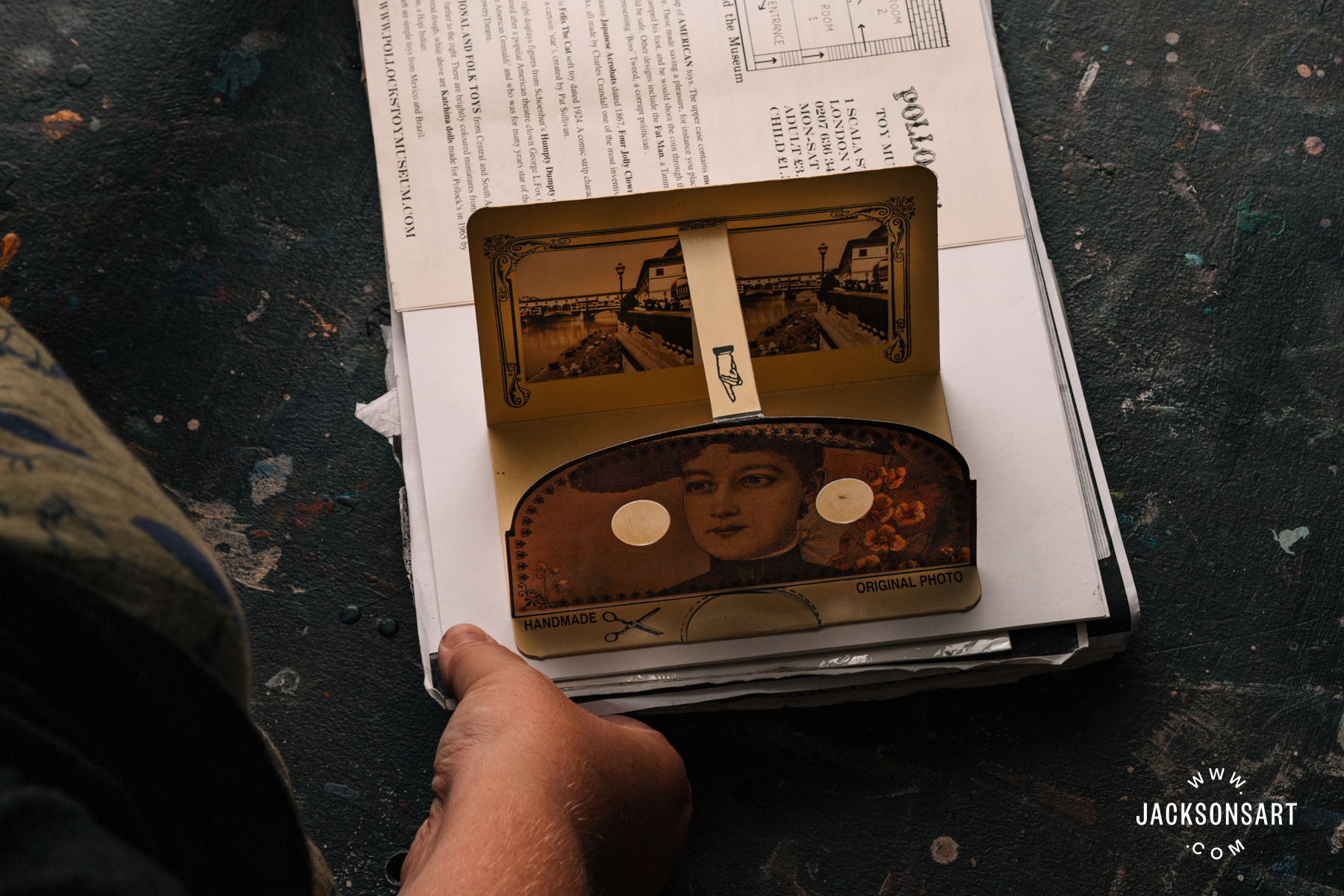 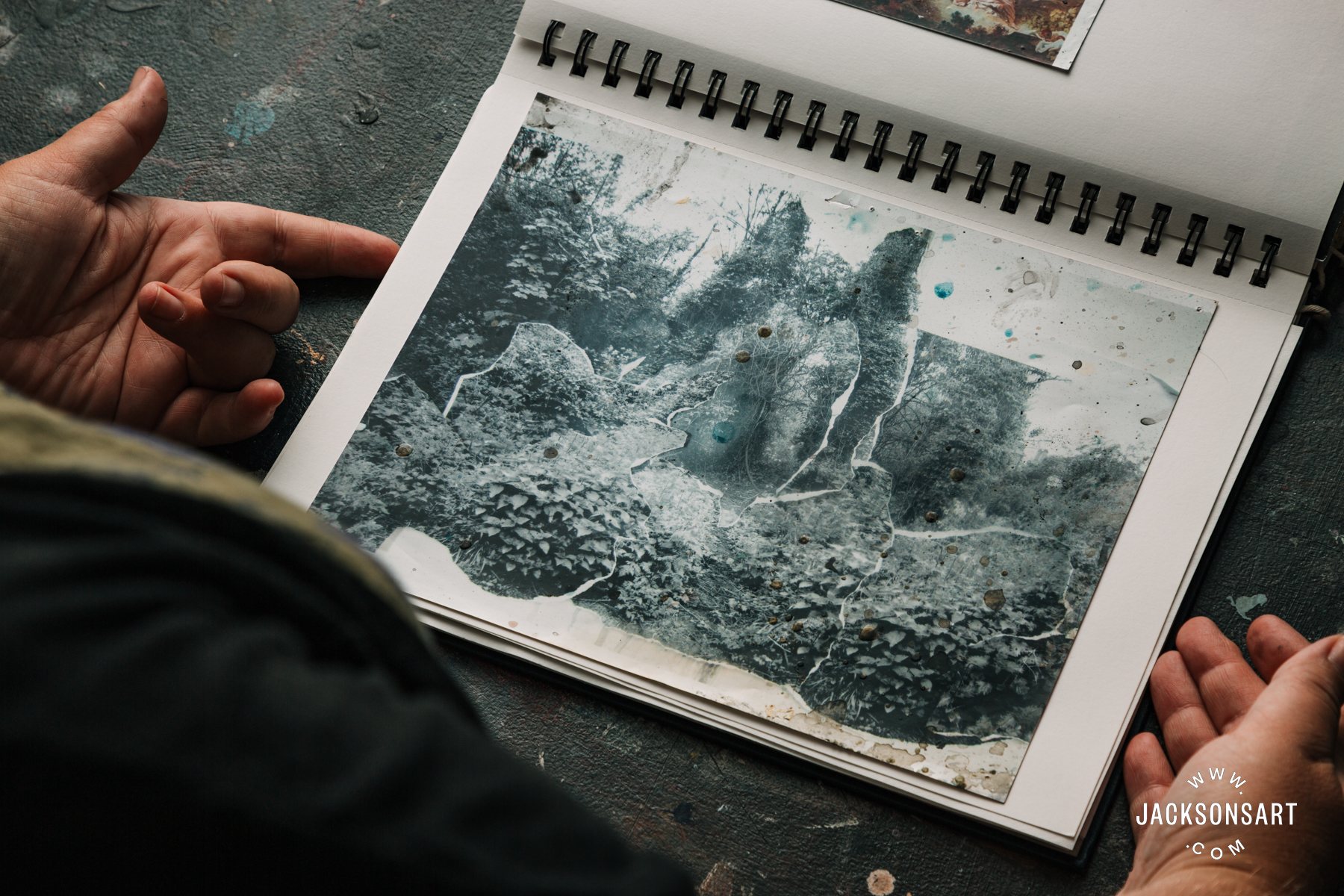 Sometimes I’ll rediscover something really important. As an example, I’m currently planning a show involving artists who play with scale, working with models and maquettes as part of their process. I’m looking to expand the contemporary artists who will feature in this exhibition, which will take place at the RWA in Bristol at some stage over the next couple of years. Whilst going through my sketchbook I found a pamphlet from the Miniature Worlds exhibition, which took place at the Jerwood Space, London, in 2006. This revealed some really interesting artists who I hadn’t consciously been aware of or considered when curating this show. However, it’s interesting to me that scale and modelmaking were thematic concerns of mine, albeit tangentially, ten or fifteen years ago, and have only recently come to the fore within my practice. I’ve been experimenting with model making and drawing from models over the past five years or so. 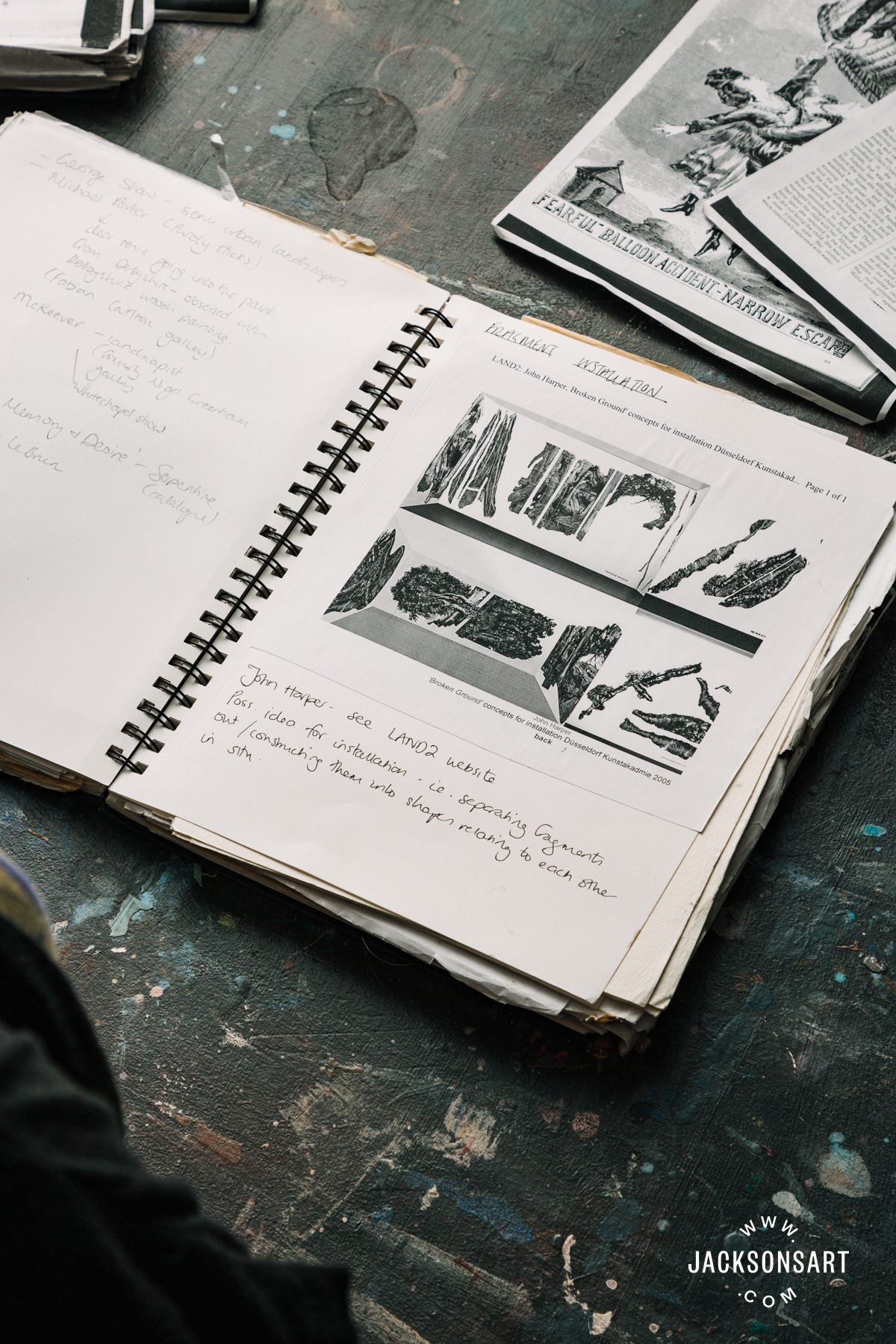 My advice to artists is to see a sketchbook as a useful, practical tool. If it is a useful place to test out colours or techniques, or to sketch about compositions before making a final work, do this. My sketchbooks are certainly not pretty but they are a useful record of historical, current, and future references and ideas. 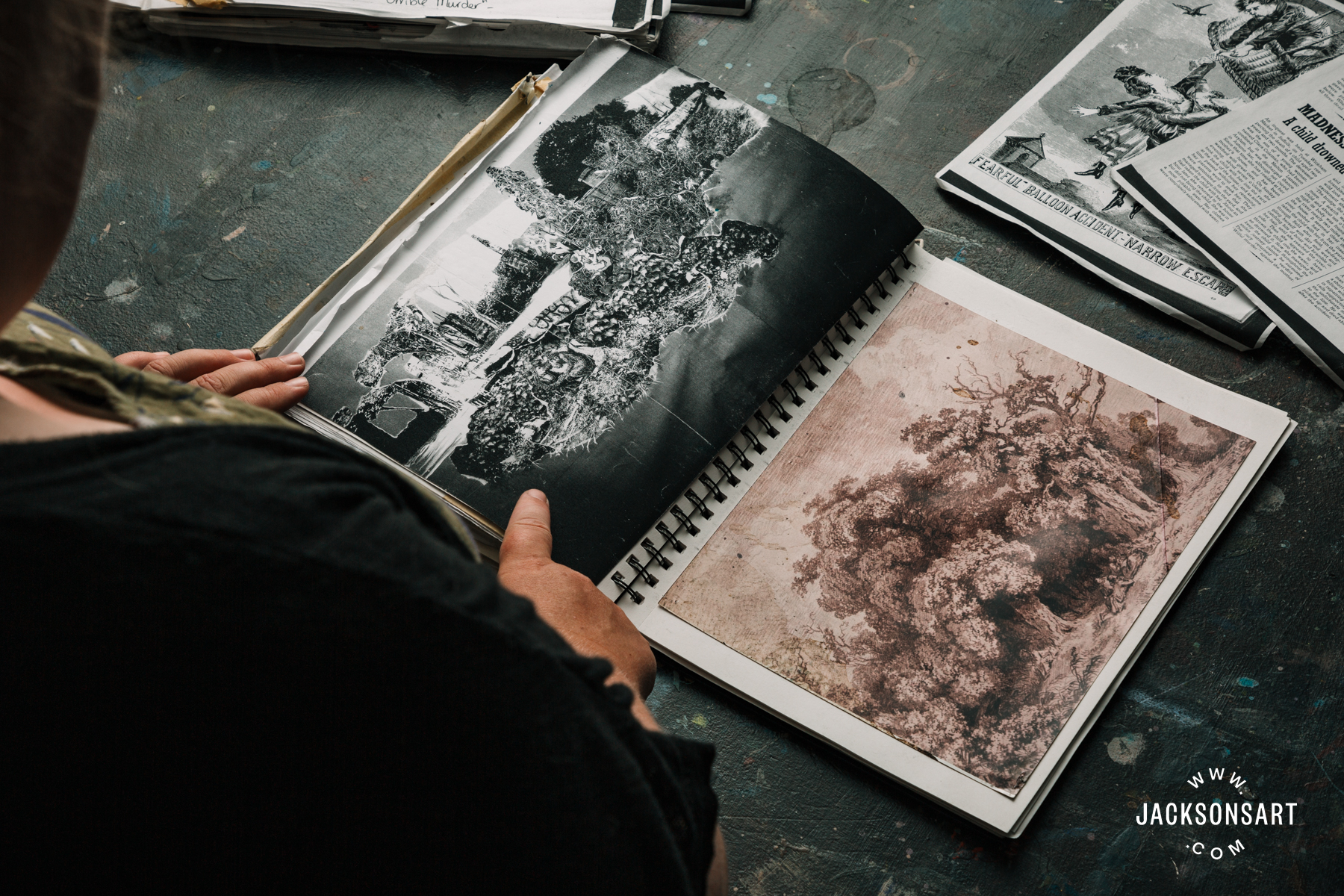 Juliette won the Jerwood Drawing Prize in 2005, was one of five shortlisted artists for the John Moores Prize in 2014, receiving the Visitor’s Choice Award, and received the John Ruskin Prize in 2019. She was elected to the Royal Institute of Painters in Watercolours and the Guild of St. George in 2020, and became a Royal West of England Academician in 2021.

Juliette’s work seeks to describe the borderlands on the fringes of urban developments, capturing the benign battles waged between man and nature. Her renditions of the (sub)urban landscape are interrupted by the threat of an unknown presence. The dark recesses allow the imagination of the viewer to place where that potential threat might be lurking. She experiments with complexity and scale. Through her use of watercolour she aims to challenge the historical associations of this medium with preparatory sketching in the field, and domestic scale or use. 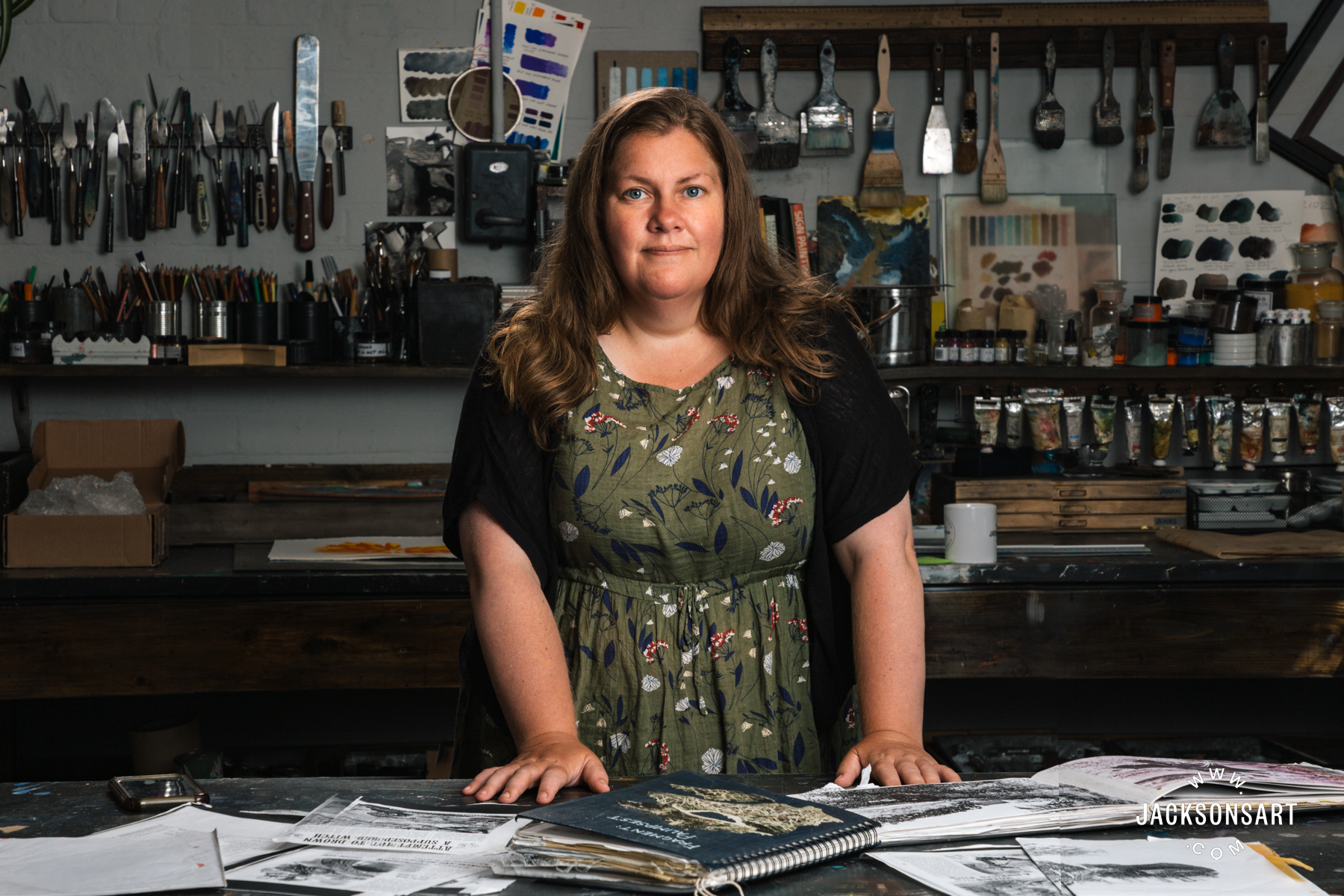 Inside the Sketchbook of Evie Hatch

Collage for Beginners – What You Need to Get Started

Developing a Daily Drawing Practice With the Royal Drawing School