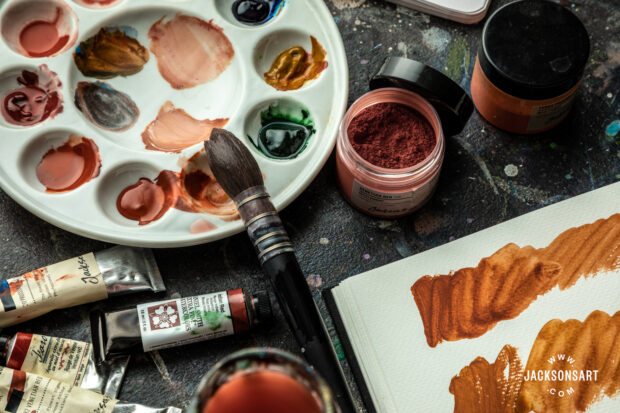 Venetian Red is one of many earthy-red colours named after a geographical location– other examples include English Red, Pompeii Red, Indian Red, and Pozzuoli Red. These colours are usually (but not always) made using synthetic iron oxide pigments, not earth from the regions they are named after, but their names often speak to a historical colour that has been passed down through history. This article focusses on Venetian Red, one of the most common red earths on artist palettes. Why is it such a special colour and what role can it play in the artist’s palette? 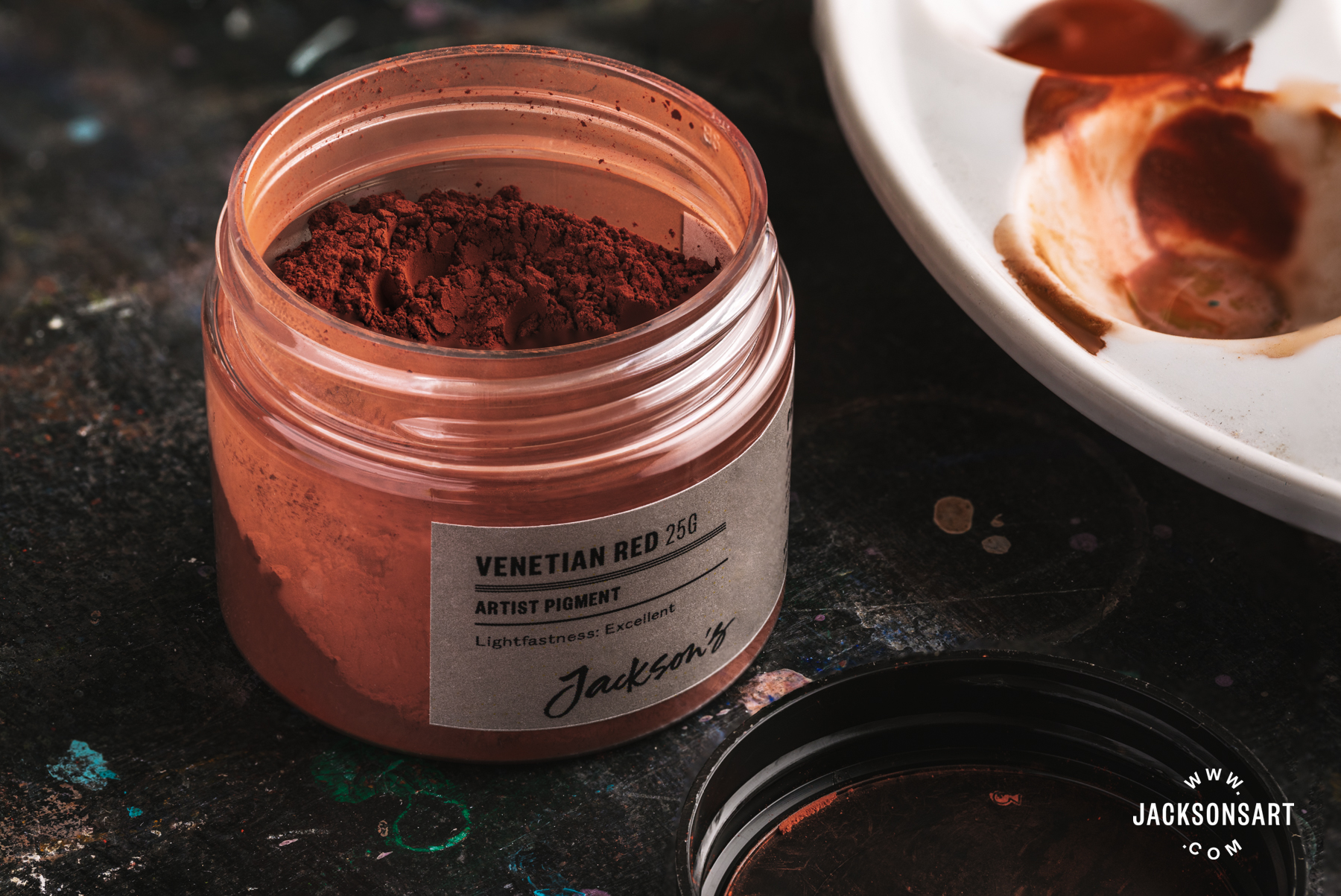 Why Do Red Earth Pigments Vary in Colour?

The colour of red earth is created by the presence of hematite– an iron-oxide-based mineral. The exact shade varies from location to location due to the concentration of hematite and the presence of other minerals that is specific to that area. The colour that we know as Venetian Red is a particularly warm shade of earthy red. It is less orange than Pozzuoli earth, named after a city near Naples where the earth contains a higher concentration of hydrated iron oxides. Indian Red, so-named for the laterite-rich earth of southern India, has more purplish undertones. 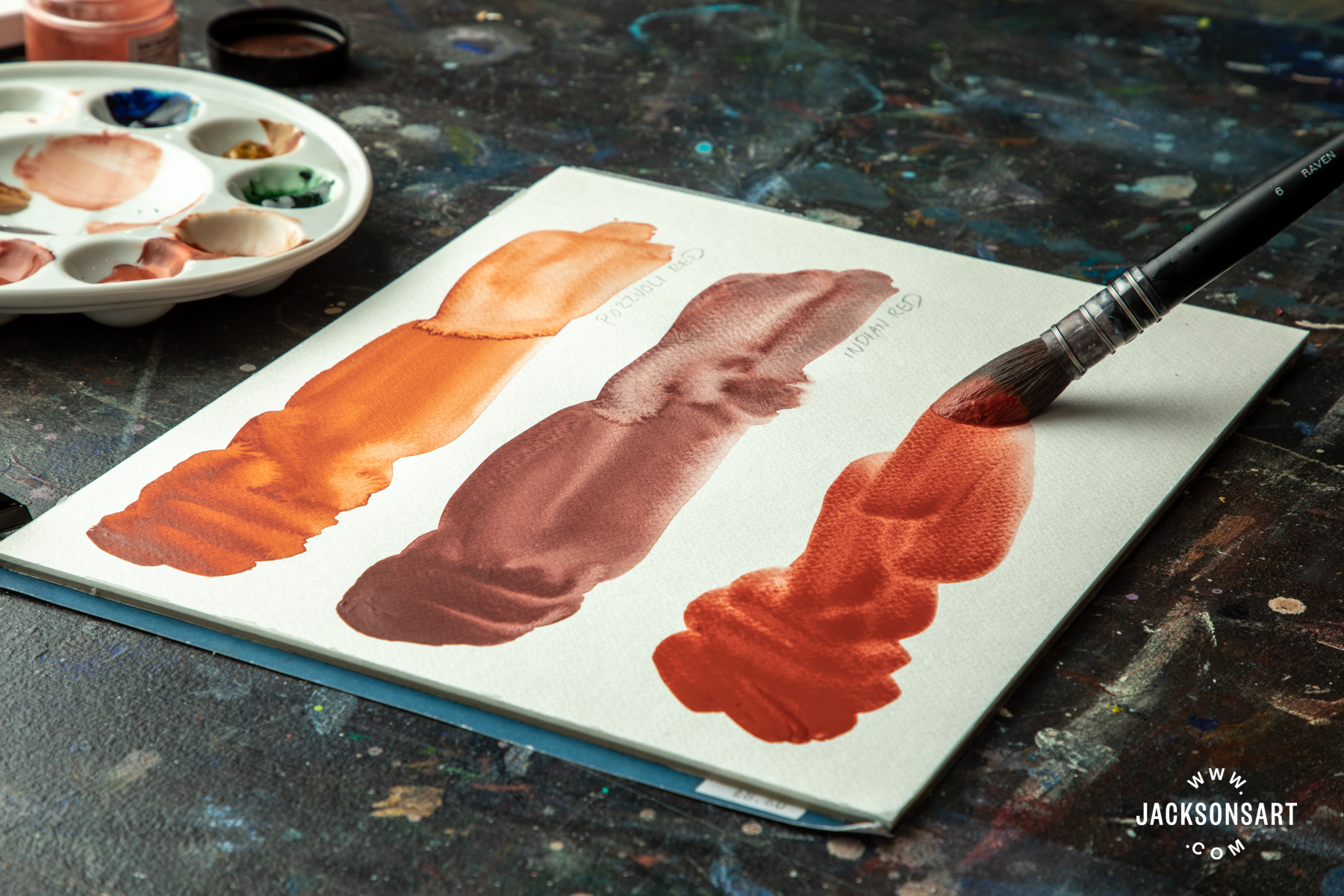 While earth pigments have been used since prehistory, Venetian Red evokes the paintings of the Italian Renaissance (broadly dated between the 14th and 17th centuries) in both name and colour. Venice was an important location during this period of art history, and in the work of Venetian artists we find frequent use of red earth. Its role was more subtle than the opulent and expensive Lapis Lazuli and the transparent Red Lake pigments that really define the period, but it was absolutely essential in the Old Masters’ palettes and underpinned many essential mixtures. Red earth pigments were mixed with white as a basis for caucasian skin (a colour known as cinabrese), mixed with Yellow Ochre to depict glowing orange drapery, and used diluted as an underpainting, or imprimatura, layer. In other examples it was used alone with a glowing effect– the seated boy’s stockings in Titian’s The Vendramin Family (on the right-hand side of the painting below) are painted almost entirely with red earth: 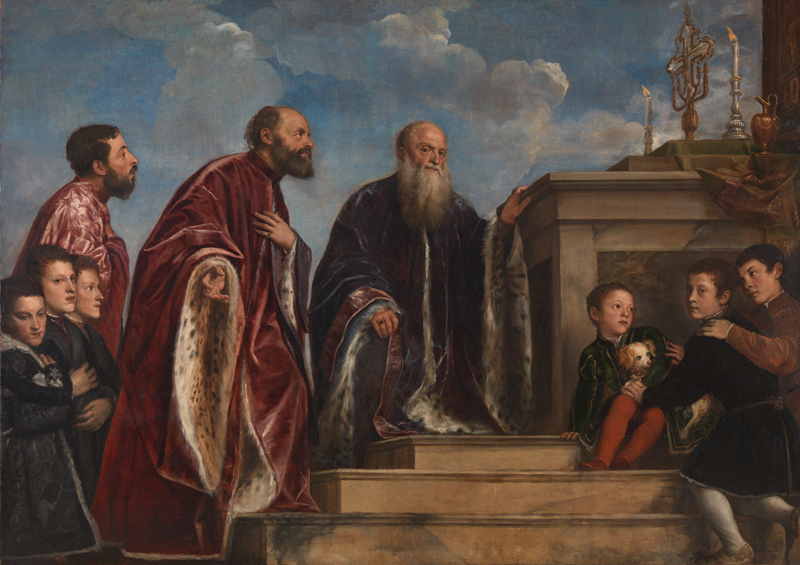 Which Red Earth Pigments Did Artists of the Italian Renaissance Actually Use?

The term ‘Venetian Red’ didn’t enter the English lexicon until the 18th century, but that doesn’t mean that red earth from the Venice region hasn’t been used as a pigment for far longer than that. Technical analyses of Old Masters paintings are not always able to differentiate between earth pigments from different places, but there is a quarry outside Venice which is reputed to the place where Titian (1490 – 1576) sourced his red earth pigments. However, the reality is probably less simple that this– Titian and his contemporaries most likely used red earths from around the world.

Venice’s position on the Adriatic Sea made it a major centre of commerce during the 15th and 16th centuries. Pigment sellers, known as the vendecolori, sprang up across the city, and import inventories that survive include Lapis Lazuli from Afghanistan, Red Lake pigments from South America, Smalt from Northern Europe, and various earth pigments that are listed as just terra rossa (red earth) and terra negra (black earth). These pigments would have been sold to Venetian customers, as well as distributed further across Europe. Considering Venice’s bustling trade in pigments it is unlikely that Venetian Renaissance painters would have relied solely on Venetian earth. Georgius Agricola, a contemporary of Titian living in Venice described how painters would “select earths on the basis of their colour”. From this account, it seems like they had many to choose from. 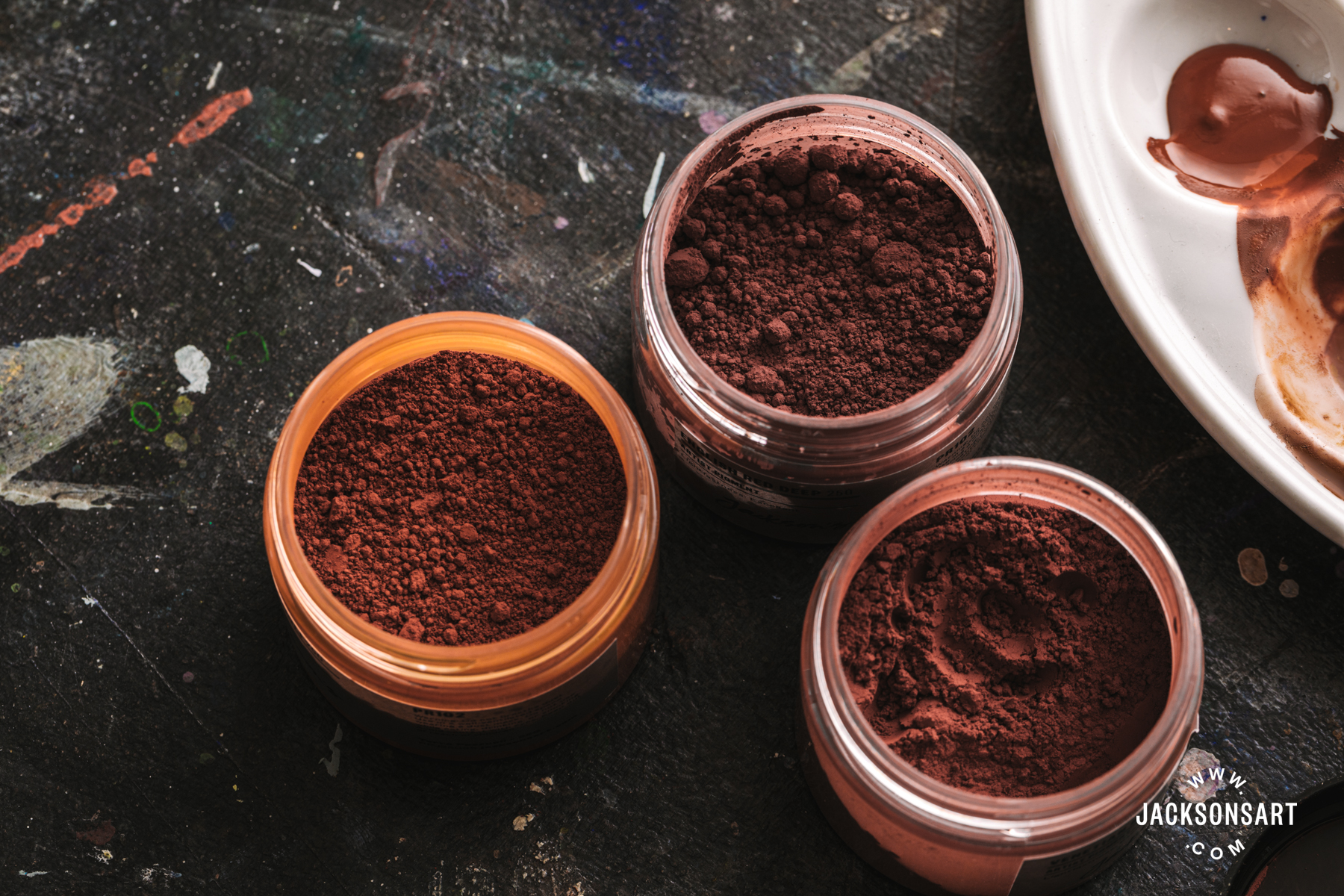 There are still places in the Venice region from which genuine Venetian earth is sourced, and these locations have probably been used since antiquity. The natural red earth is dried, refined, and ground to make a pigment suitable for making artist paints. The resulting pigment is classified under pigment index number PR102 to indicate that it contains iron-oxides of a natural origin. However, this production is on a small scale and the vast majority of paints labelled Venetian Red are made with synthetic iron-oxide pigment PR101. This pigment is made by thermally decomposing iron salts at extremely high temperatures, converting the iron into hematite. It’s a process that is broadly the same for all synthetic earth colours– natural earths make up only 13% of the global production of iron-oxide pigments, while their synthetic counterparts account for a staggering 87%. 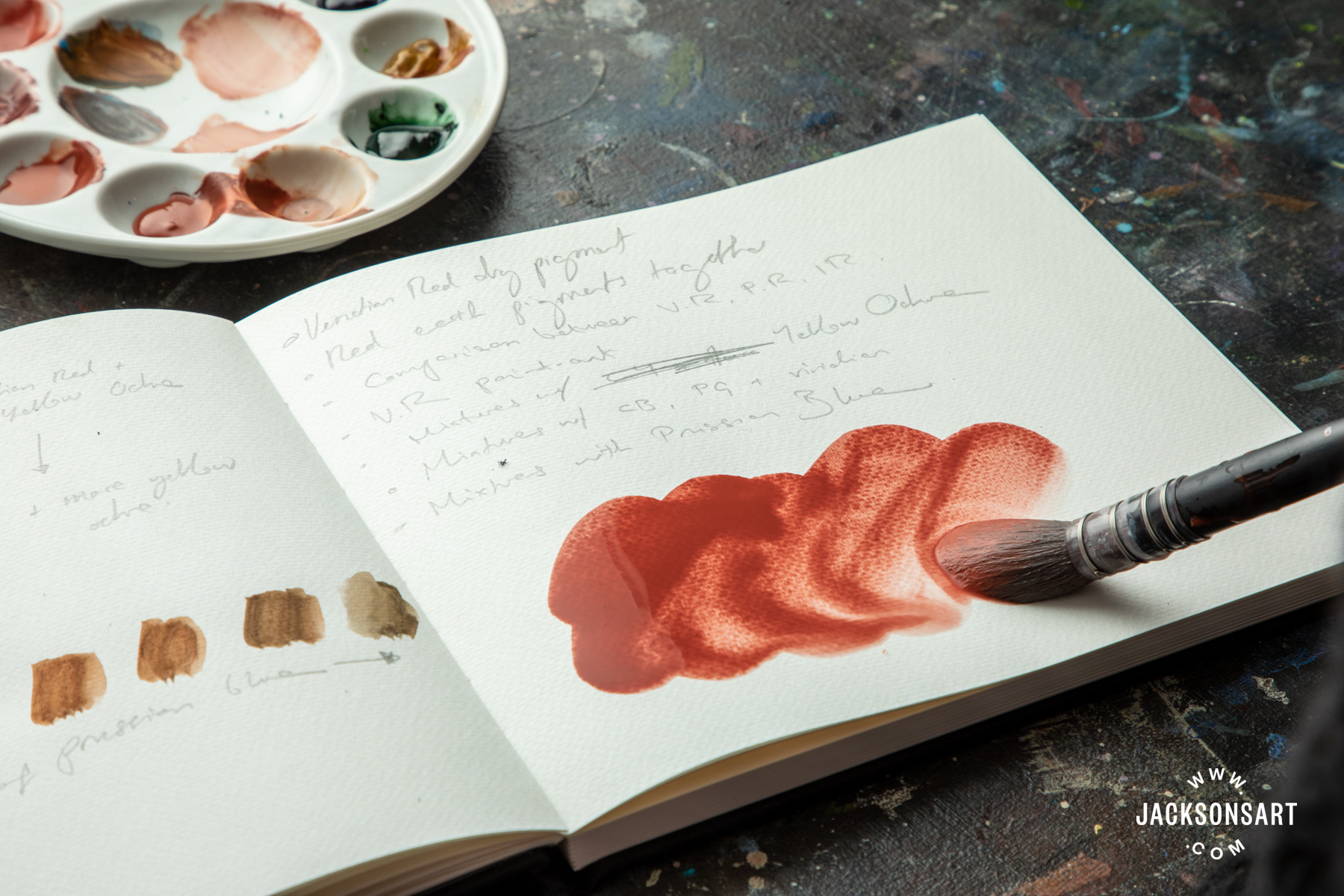 Perhaps the idea of a synthetic earth doesn’t hold the romance of the genuine earth pigments that were used by the Old Masters, but synthetic iron oxides can be chemically adjusted to alter their transparency/opacity and colour temperature, enabling the particular nuances of the colour to be consistently produced. This means that when we open a tube of Venetian Red, we can be sure that it has the characteristics that we expect.

A classic mixing compliment is Yellow Ochre. Being warm and opaque with that characteristic earthiness, they both share similar properties. In his painting Noli me Tangere, Titian mixes red earth with Yellow Ochre and a small amount of Indigo to make a warm orange-y brown for tree foliage. 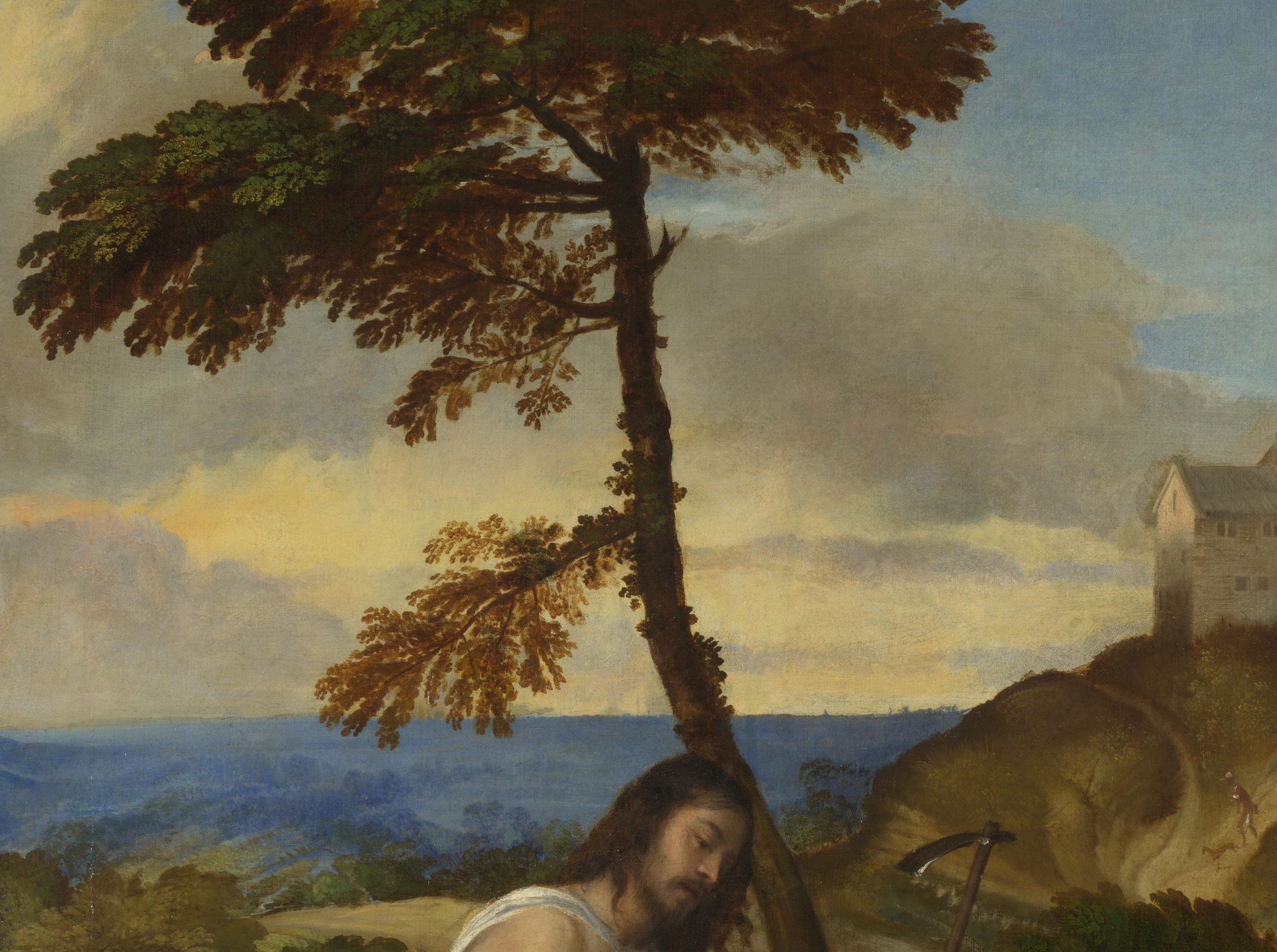 Note how in the above detail the blue in the horizon really heightens the orange in the foliage! I tried this mixture myself with watercolour, but instead of indigo (which is a notoriously fugitive pigment) I’ve used Prussian Blue. 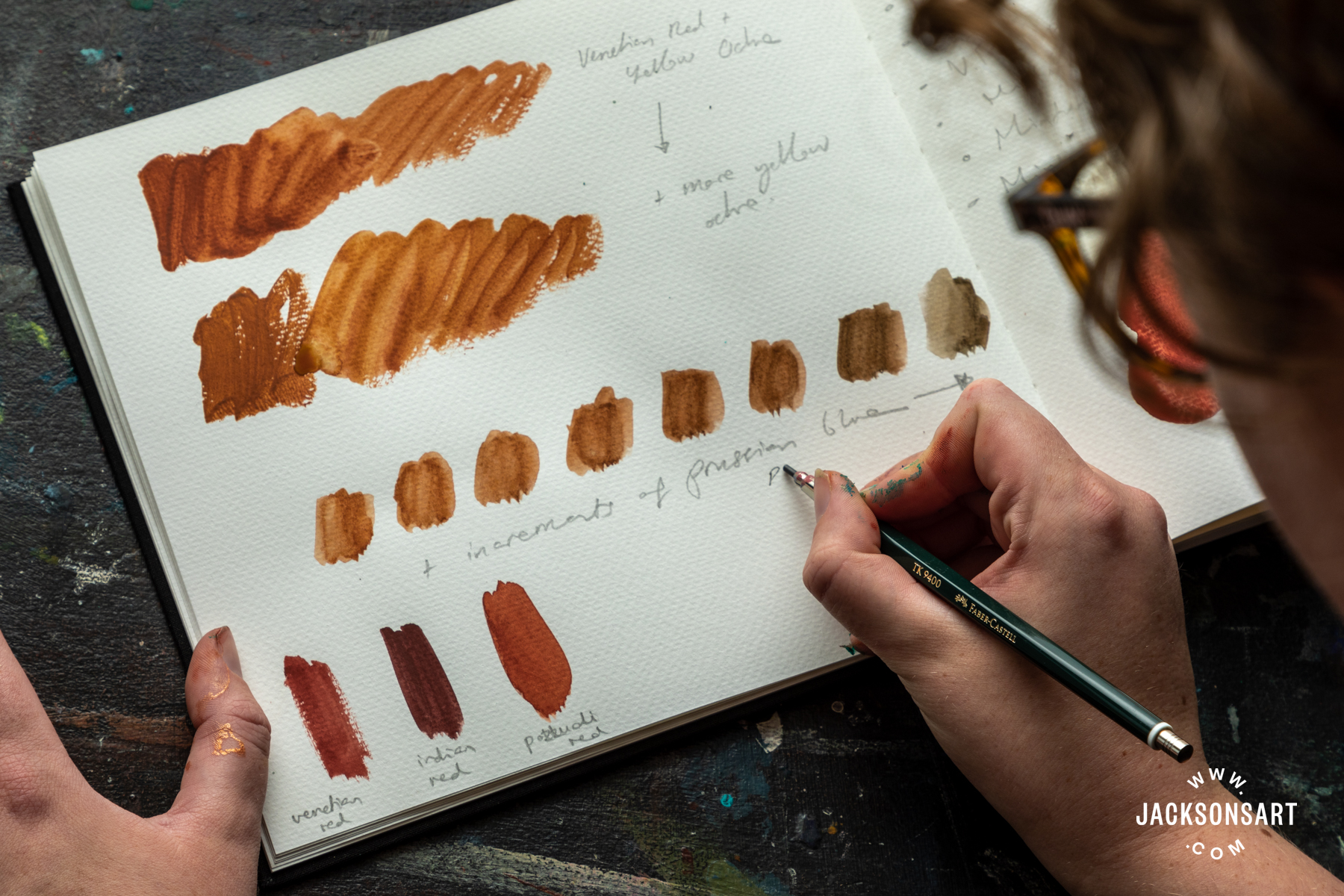 The two large swatches at the top of the page are mixtures of Venetian Red and Yellow Ochre. The series of smaller swatches below are made by adding increments of Prussian Blue to the mixture.

Venetian Red is an intensely warm shade, however being opaque and low in chroma, it is also a naturally muted colour. Working with this natural dullness, it can be mixed with modern greens to make chromatic blacks, which can then be mixed with white to make a range of greys and browns. This is, I think, where the colour really comes into its own.

Used at full strength with a roughly equal amount of Sap Green, it makes a deep chromatic black. Sap Green’s yellow undertones contributes to the warmth of Venetian Red, making them a lovely autumnal colour combination. 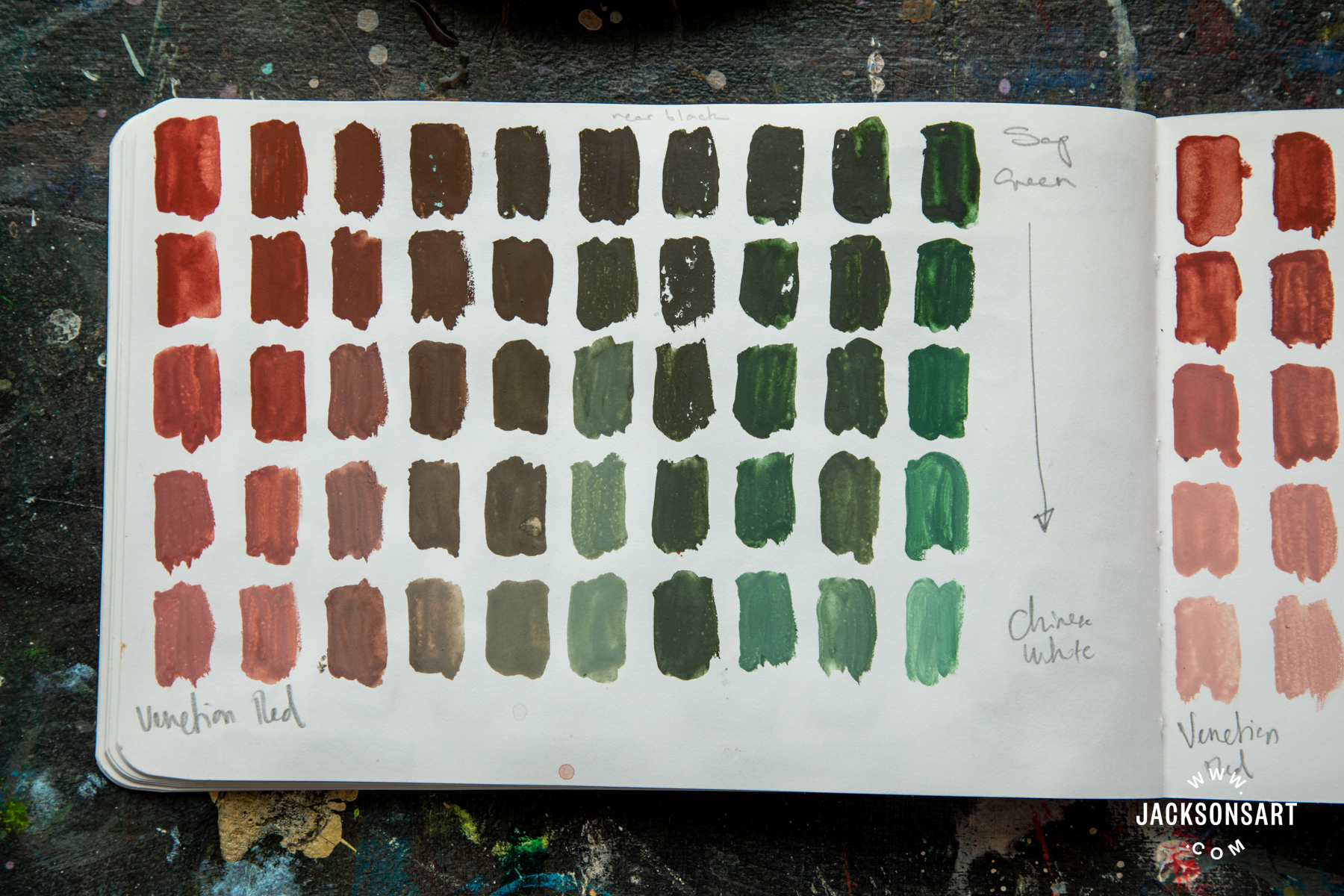 Venetian Red (left) in mixtures with Sap Green (right). Chinese White has been added incrementally from top to bottom.

A blue-green like Phthalo Green gives a slightly different colour mixing result. The warmth of Venetian Red and the coolness of Phthalo Green meet in the middle to make a more neutral colour. The red counteracts the blueness of the Phthalo Green, creating a range of natural greens suitable for landscape painting:

Venetian Red (left) in mixtures with Phthalo Green (right). Chinese White has been added incrementally from top to bottom.

I’ve used watercolour for these mixtures, but Venetian Red is found across all mediums. Here are some recommendations:

We’d love to know how you use Venetian Red in your palette. Any colour mixing ideas are always good to share. Let us know by leaving a comment below.

Making Your Own Oil Paint with Jackson’s Pigments