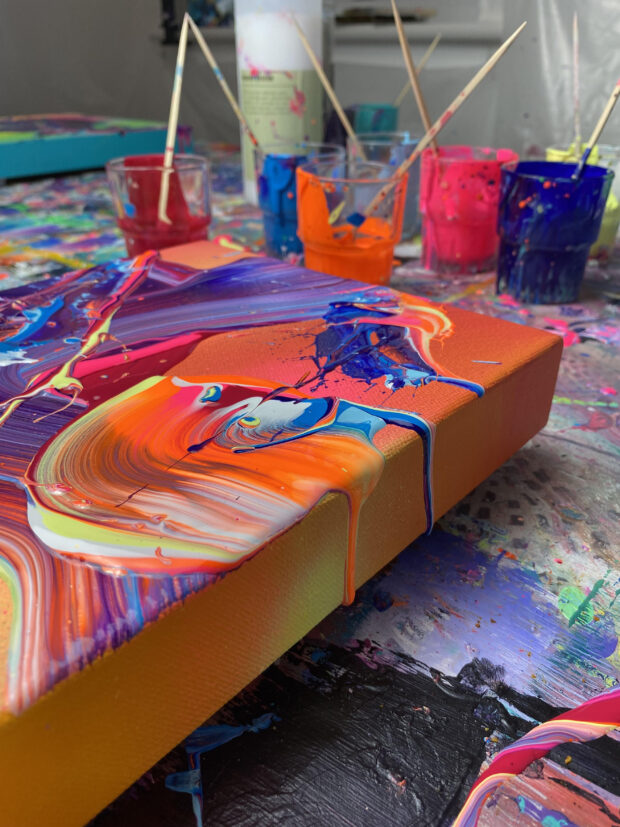 A couple of weeks ago Jackson’s asked me if I’d be interested in reviewing the new Jackson’s Pouring Medium. I hadn’t used it before but have recently been pleasantly surprised at the quality of Jackson’s Artist materials in previous purchases, so I was excited to see how their brand of Pouring Medium would hold up to my usual go to and work within my practice. 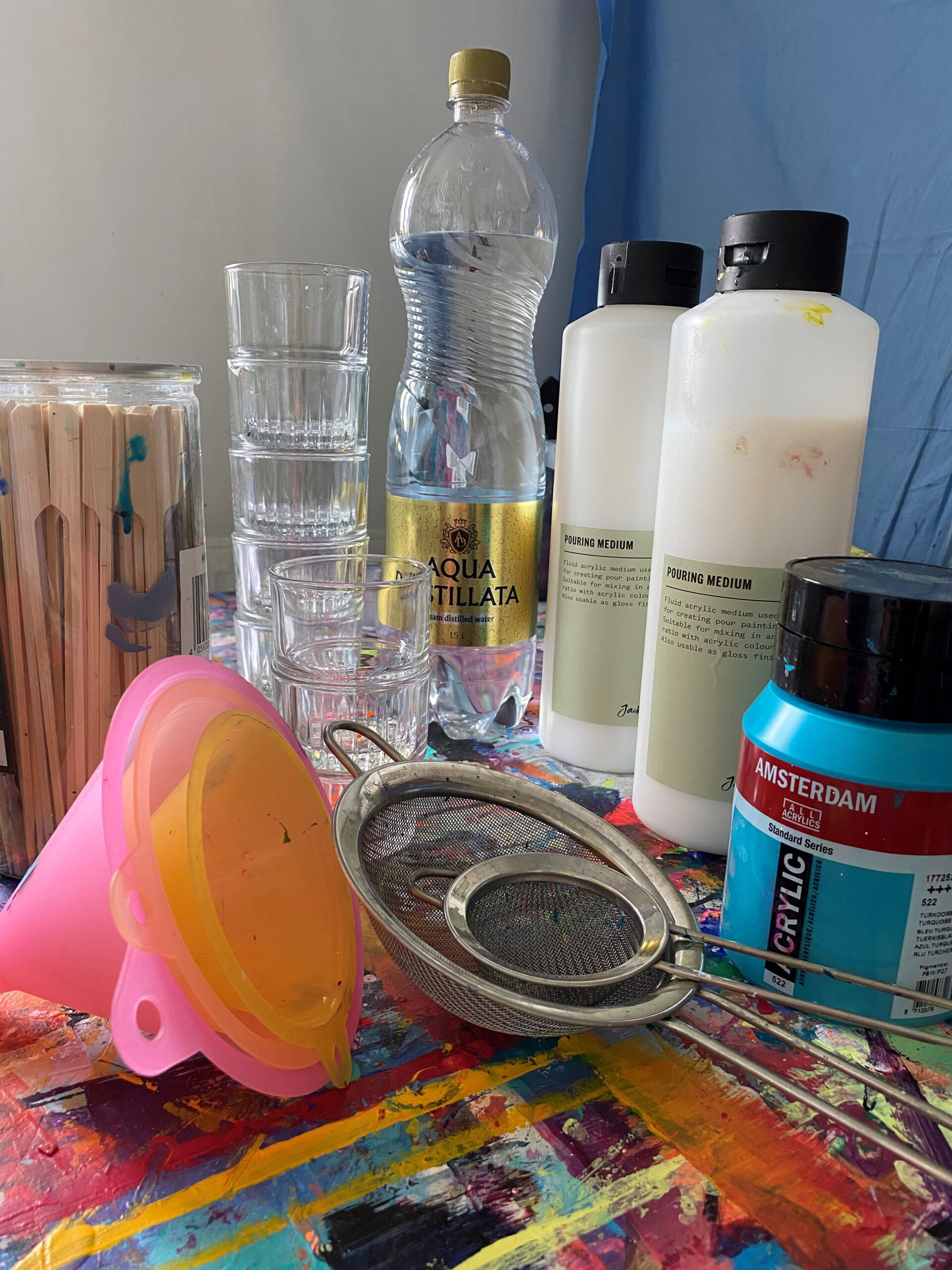 The first thing I did after receiving my supplies was to decant a little bit of the medium from the bottle and inspect it. The consistency of the product itself is very fluid, as expected, however more so in comparison to other brands like Liquitex, as it is quite a bit thinner and less viscous. It also has a bit of a smell, but isn’t overpowering or even very noticeable – especially when mixed in with paint which is nice. 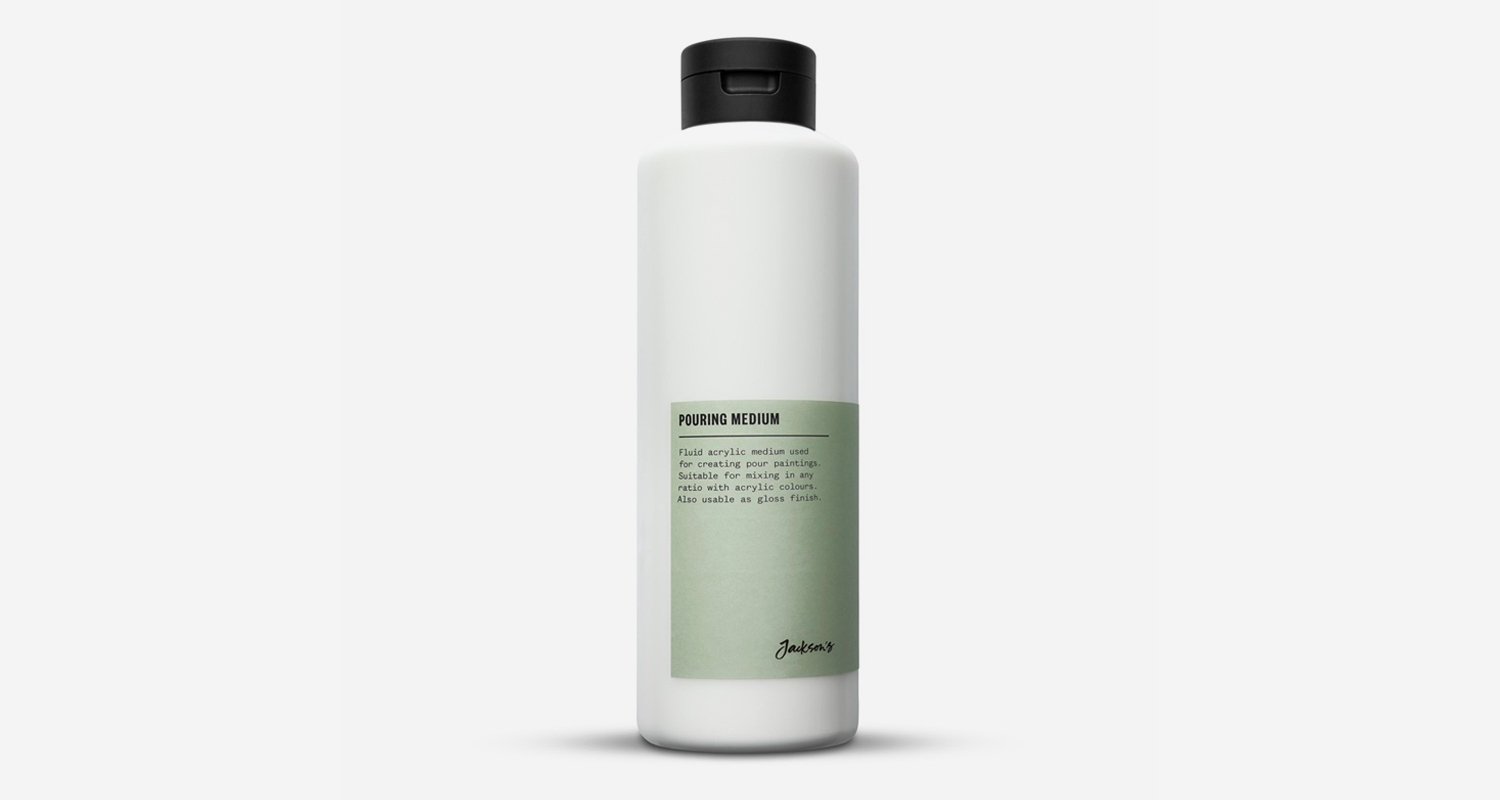 I liked the straightforward, minimal packaging and design of it, though I do wish it were available in a few different size options, as the large 1L bottle can be quite cumbersome when trying to measure out small and accurate amounts of it at a time, as I do.

I made a bit of a mess, with a lot of medium running down the sides of the bottle, getting on my hands and wasting some product. However, that being said, this little criticism probably isn’t as much of an issue for others who use larger amounts of it. On a positive note, I found it easy to wash off the skin where other mediums can be stubborn in that regard. 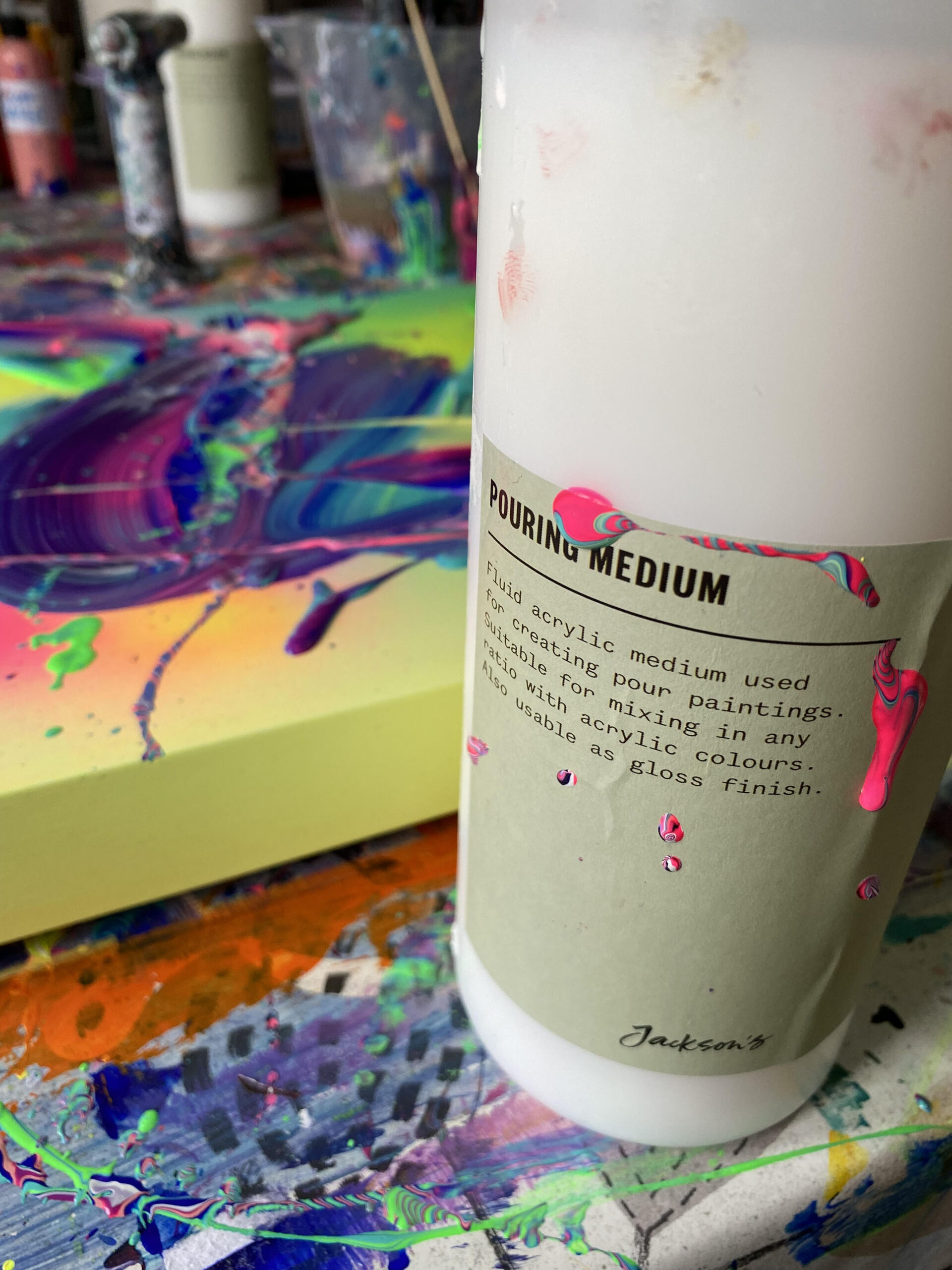 I decided I wanted to create a few dynamic abstract works to test out the Pouring Medium and Jackson’s were kind enough to send across a few surfaces to experiment on with it: a couple of cradled painting panels and a premium cotton canvas. I set about preparing my surfaces, which usually consist of smooth gradients and bursts of spray painted colour. 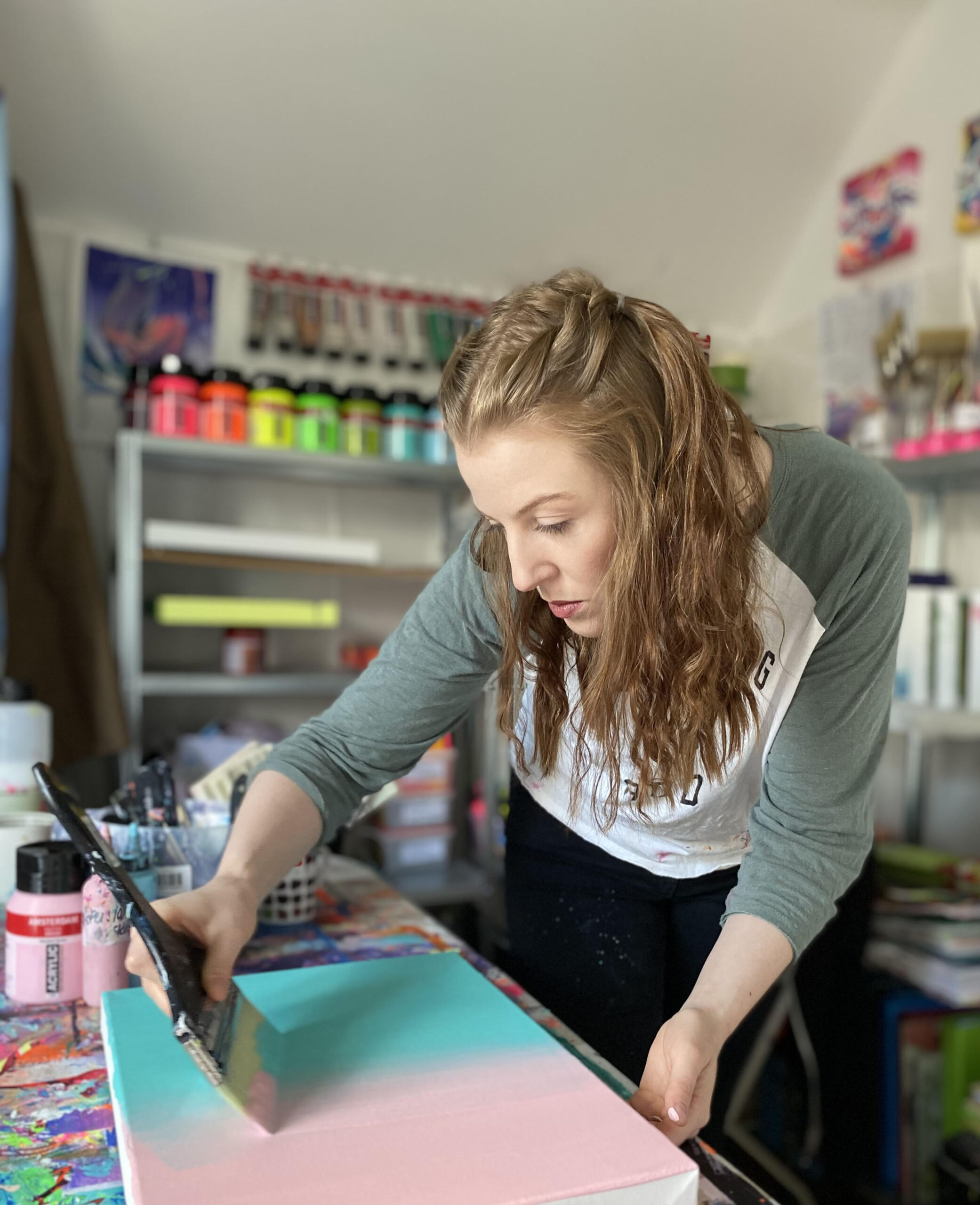 Whilst waiting for these layers to dry, I began mixing up the paints I use on top of the prepared backgrounds, which I usually apply in puddles and then brush through or often throw onto my surface in spontaneous movements.

I made the decision to use a Pouring Medium within my paint mix, alongside distilled water, as it allows me to extend the paint further, make it smoother and easier to brush through, and helps to keep the integrity, saturation and vibrancy of the paint intact. 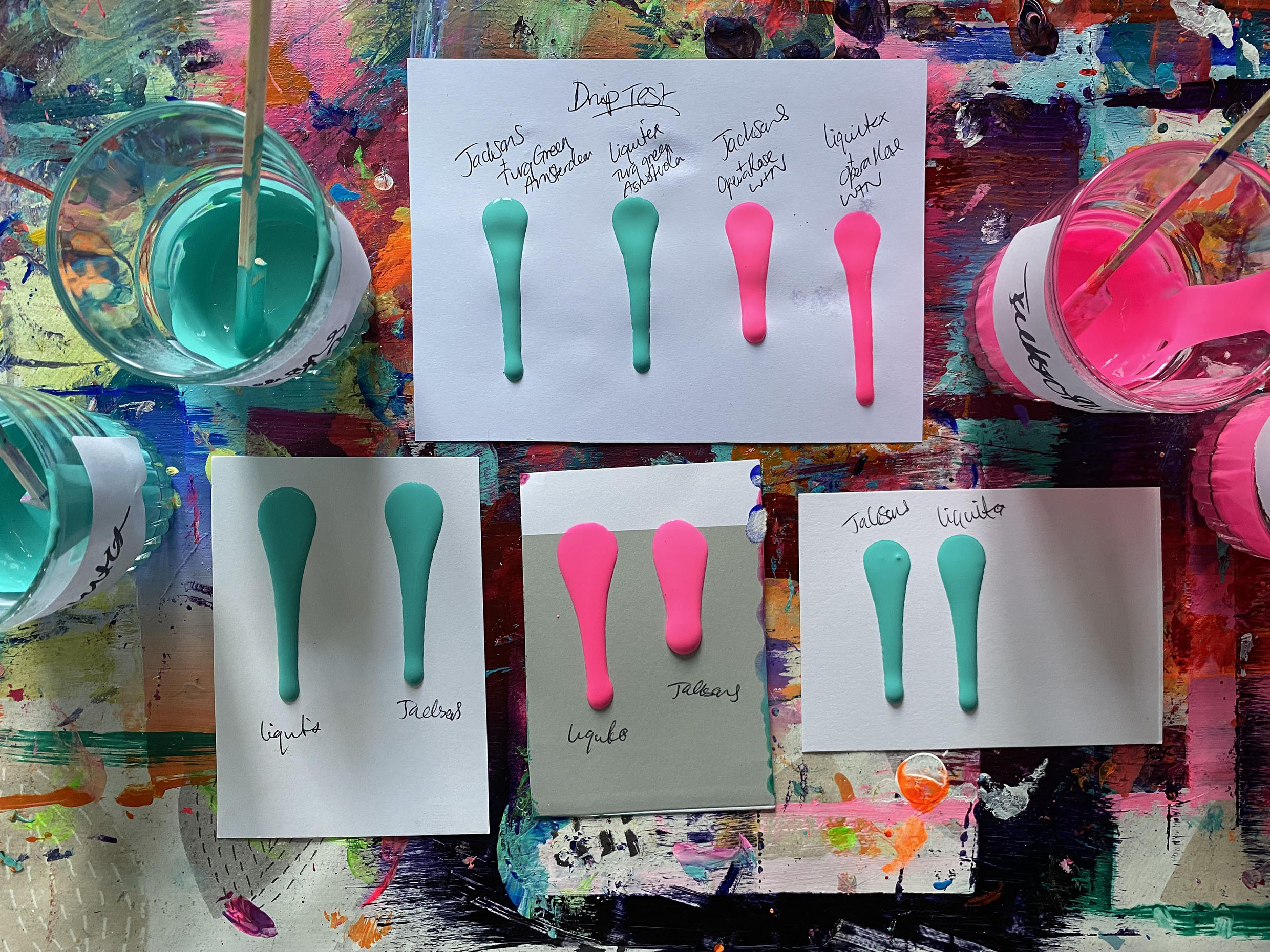 Lots of time and care is taken when mixing my paints and since I currently use a mix of both Talens: Amsterdam Acrylic Paint and Winsor & Newton Acrylic Paint, I wanted to test how both interacted with Jackson’s Pouring Medium before using it on my surfaces.

I did this by creating a few drip tests on pieces of card to test the fluidity of each brand of paint with Jackson’s Pouring Medium, compared side by side with Liquitex Pouring Medium.

The same premix of acrylic paint and distilled water was used for the tests with each of the Pouring Mediums, and on this occasion I tested Amsterdam Turquoise Green and Winsor & Newton Opera Rose (both were mixed in a ratio of 60% paint – 40% water). 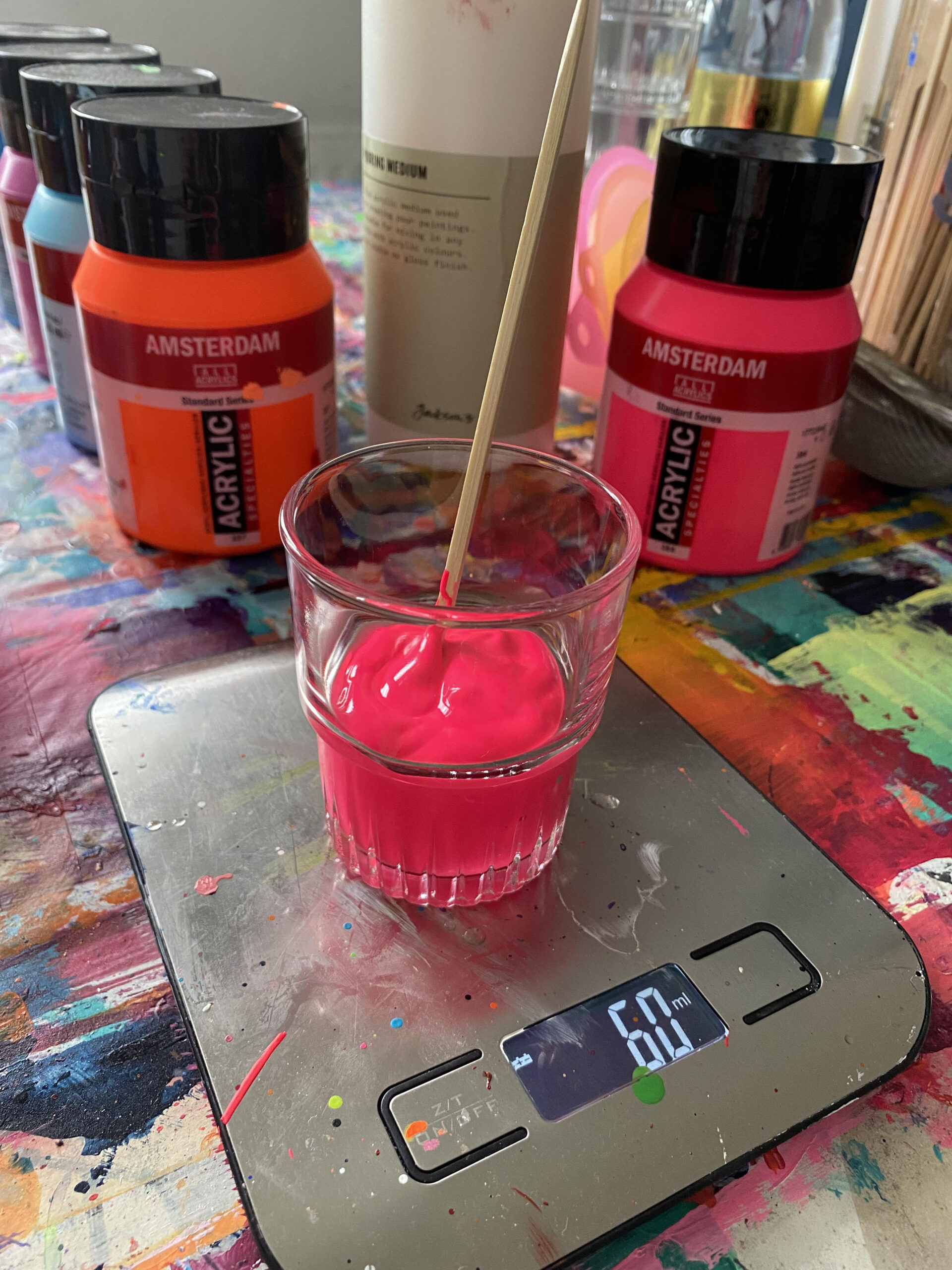 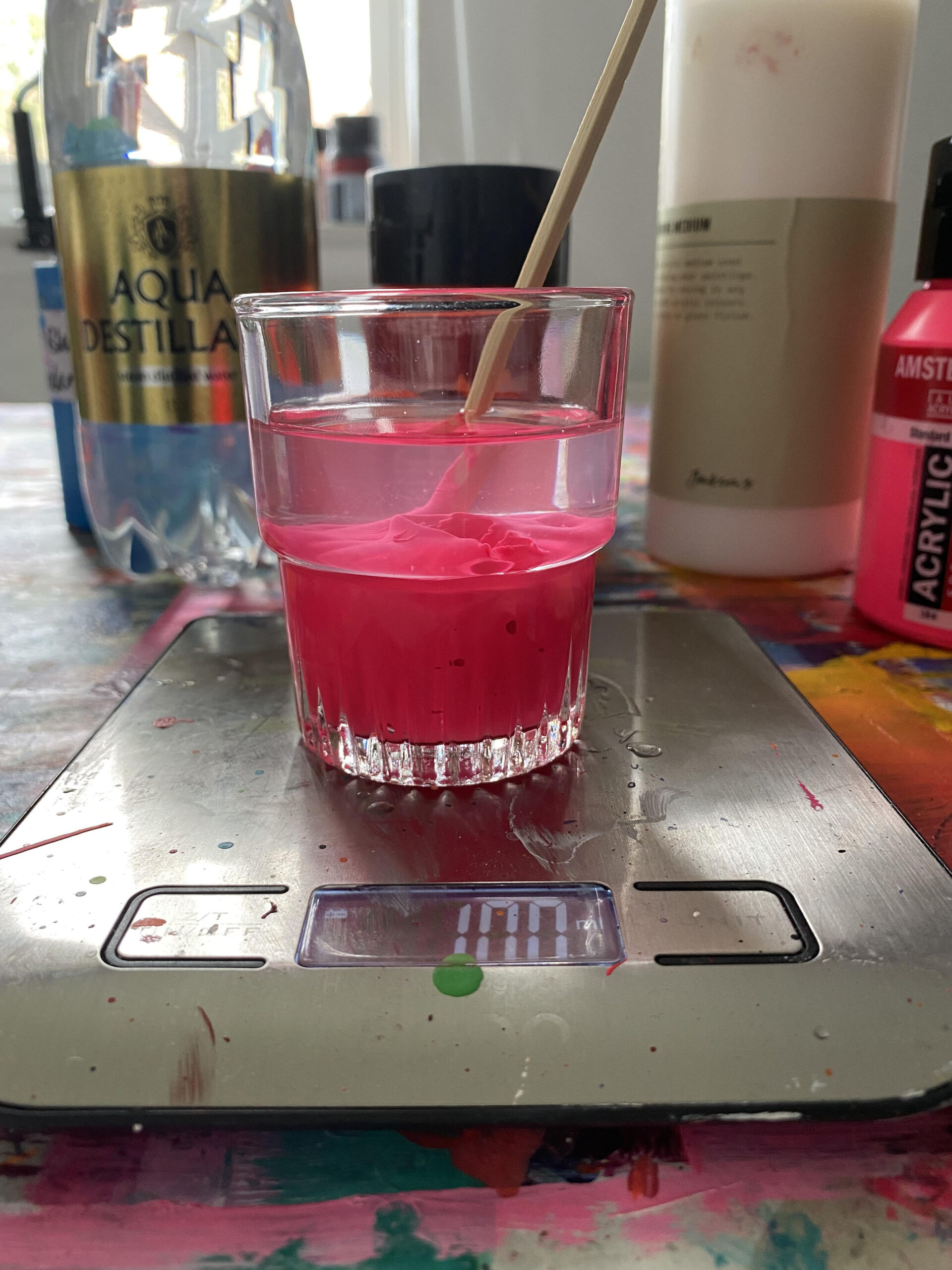 I found that despite the Jackson’s Pouring Medium being runnier in consistency initially, after being mixed with the paint it actually became thicker- only slightly so for the Amsterdam paint- but quite noticeably so with the Winsor & Newton in comparison to the Liquitex mixes.

I covered the paints and came back a few hours later after letting them sit untouched, as I wanted to see if that made a difference, and if I had produced a few air bubbles whilst mixing, they would have disappeared by then, but the paints were unchanged. 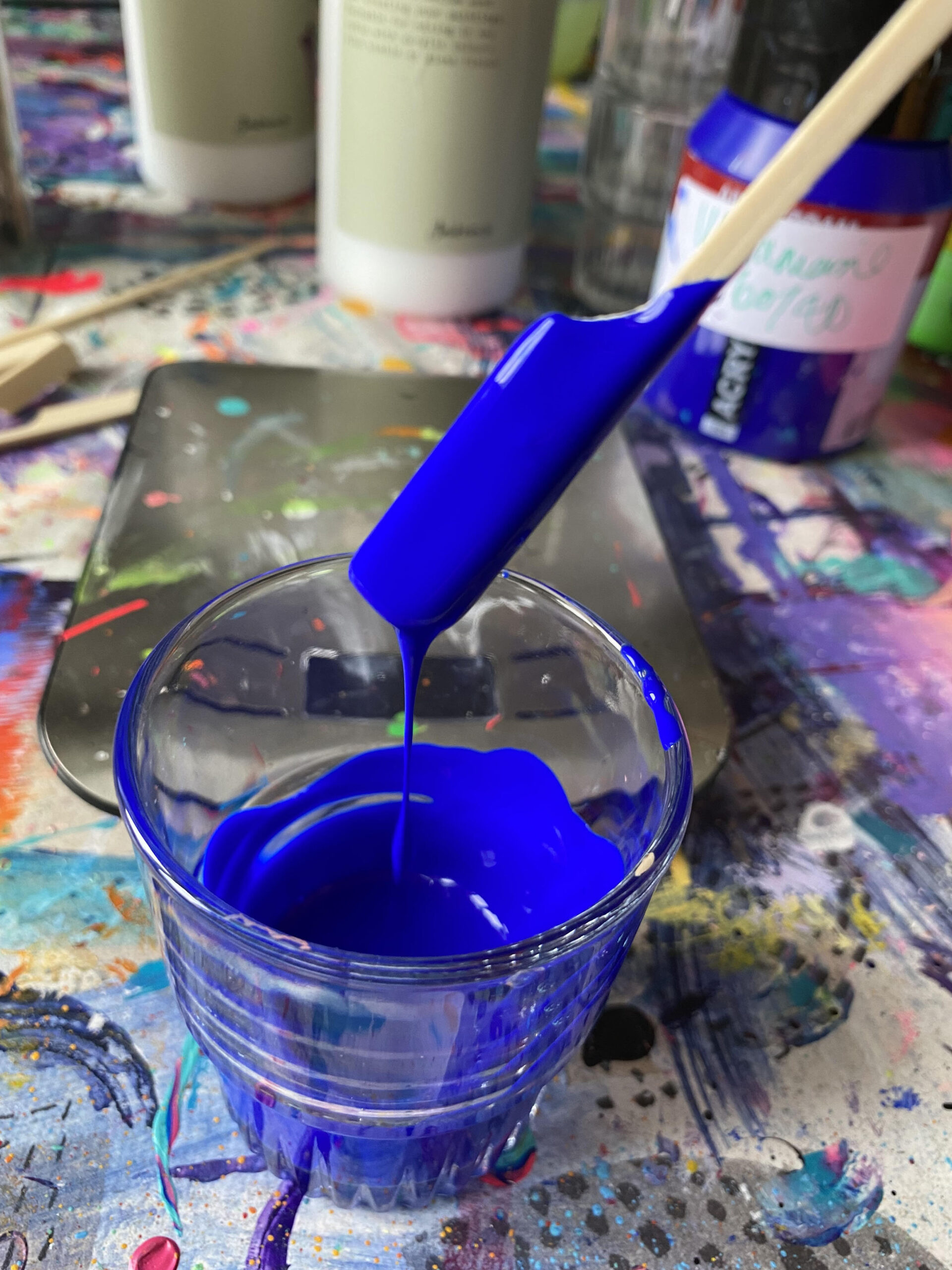 Despite the slightly thicker consistency, I still really enjoyed using this Jackson’s Pouring Medium, as the paints had great fluidity for the purpose I use them for and allowed for energetic brushstrokes through the puddles, while also giving the paint enough body to hold its shape and not move with gravity. 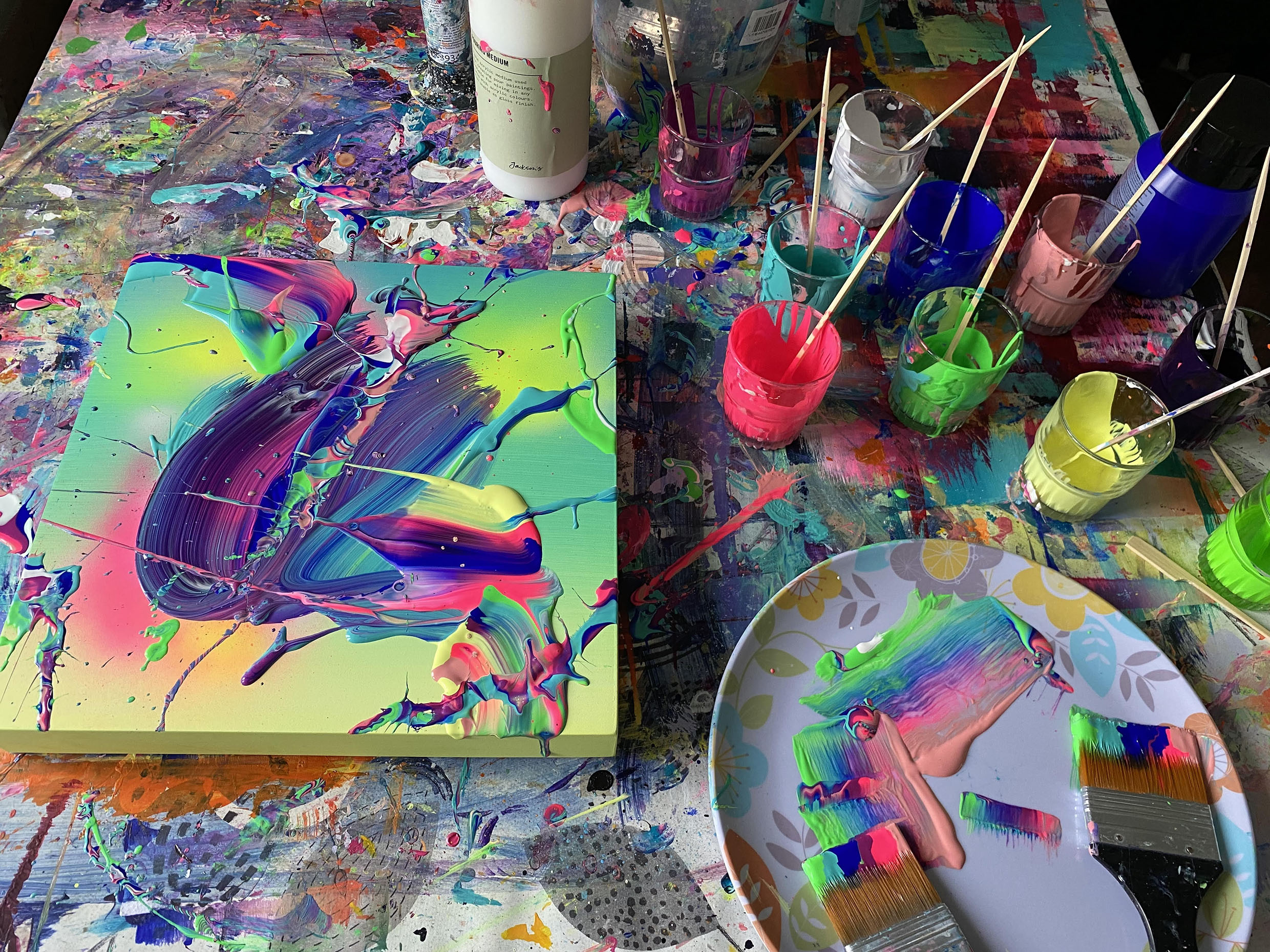 I also found myself really enjoying the cradled panels and found them to be a great fit for my practice. It allowed a smoother application of brushstrokes, and when dry, kept the details prominent, where they can sometimes get lost in the texture of the canvas.

I did find the drying time of the paint on the cradled panels to be significantly longer than on the canvas, however I was thrilled with each of the dried outcomes. 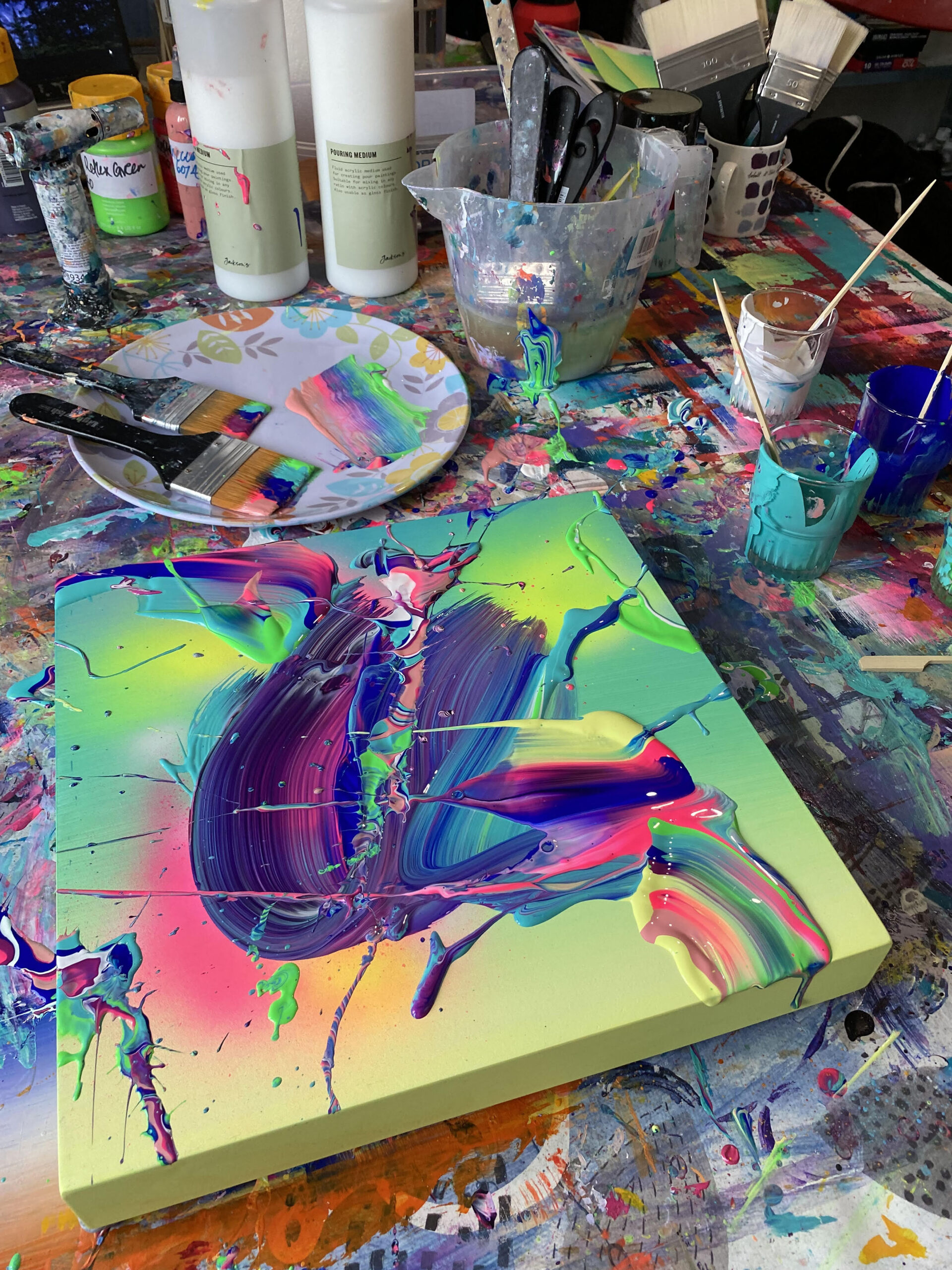 The gloss finish of the Pouring Medium caused the pieces to dry with a nice sheen, allowing the brush strokes and bursts of energy on top to be slightly more pronounced against the rest of the piece. 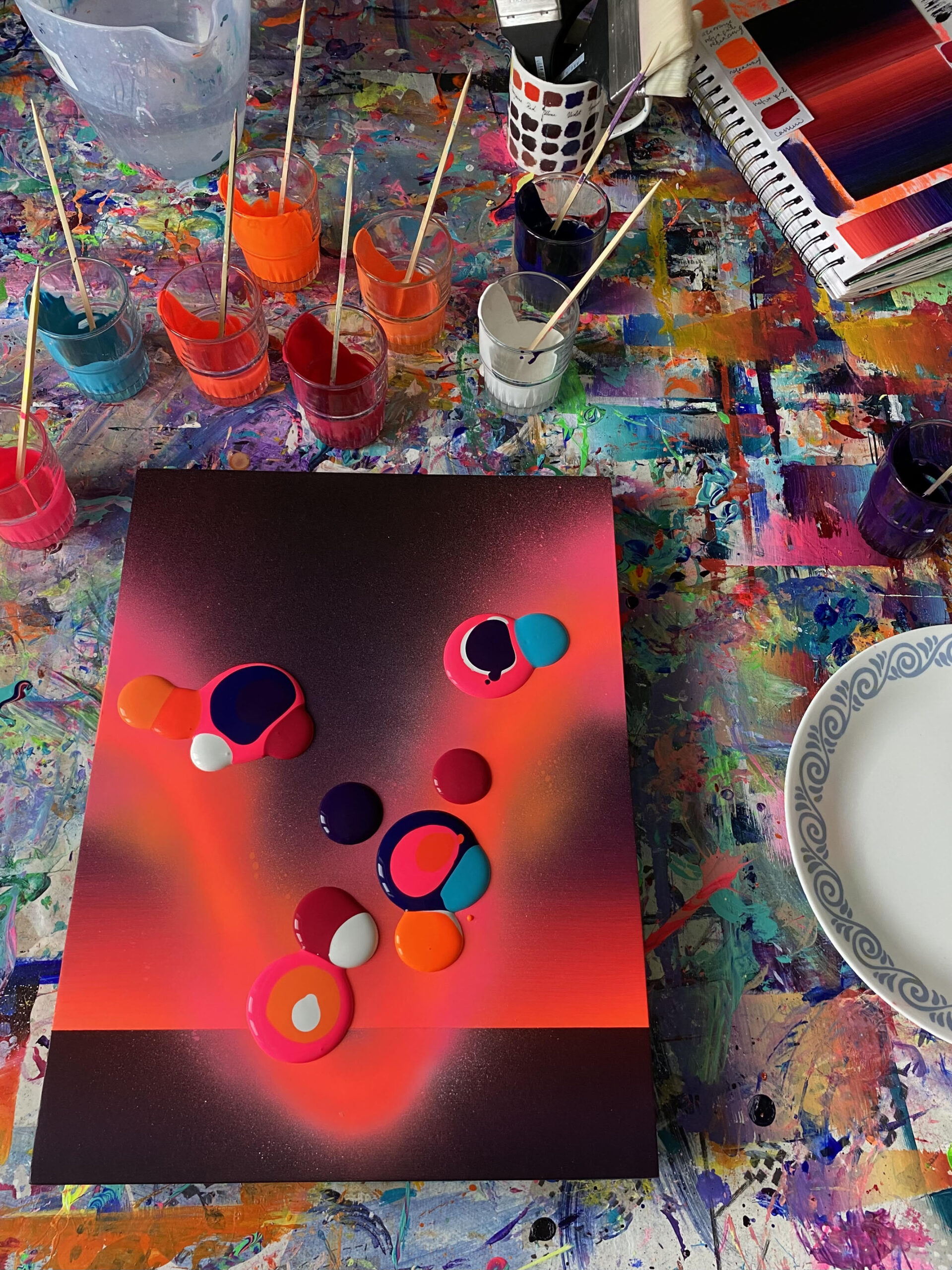 The consistency of the paint and the thickness of its application in certain areas meant that the pieces dried with a slightly three dimensional effect, which I absolutely love, as I often like to emphasise my artworks with additional textured strokes when dry. 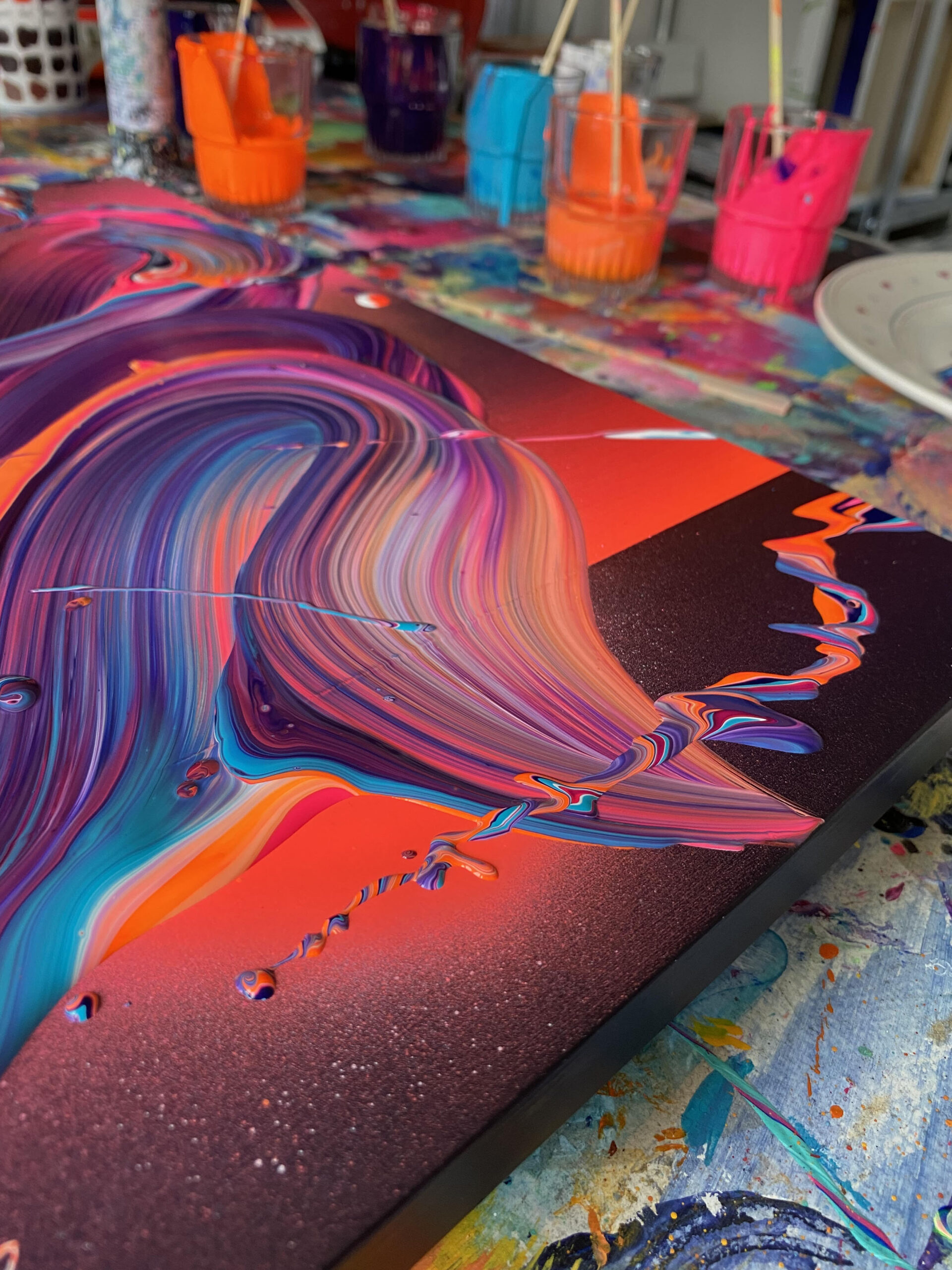 Finally, the colours themselves were still quite saturated, which is great, because I often use a lot of fluorescent colours that are transparent/semi transparent so can often dry and get lost in the background. 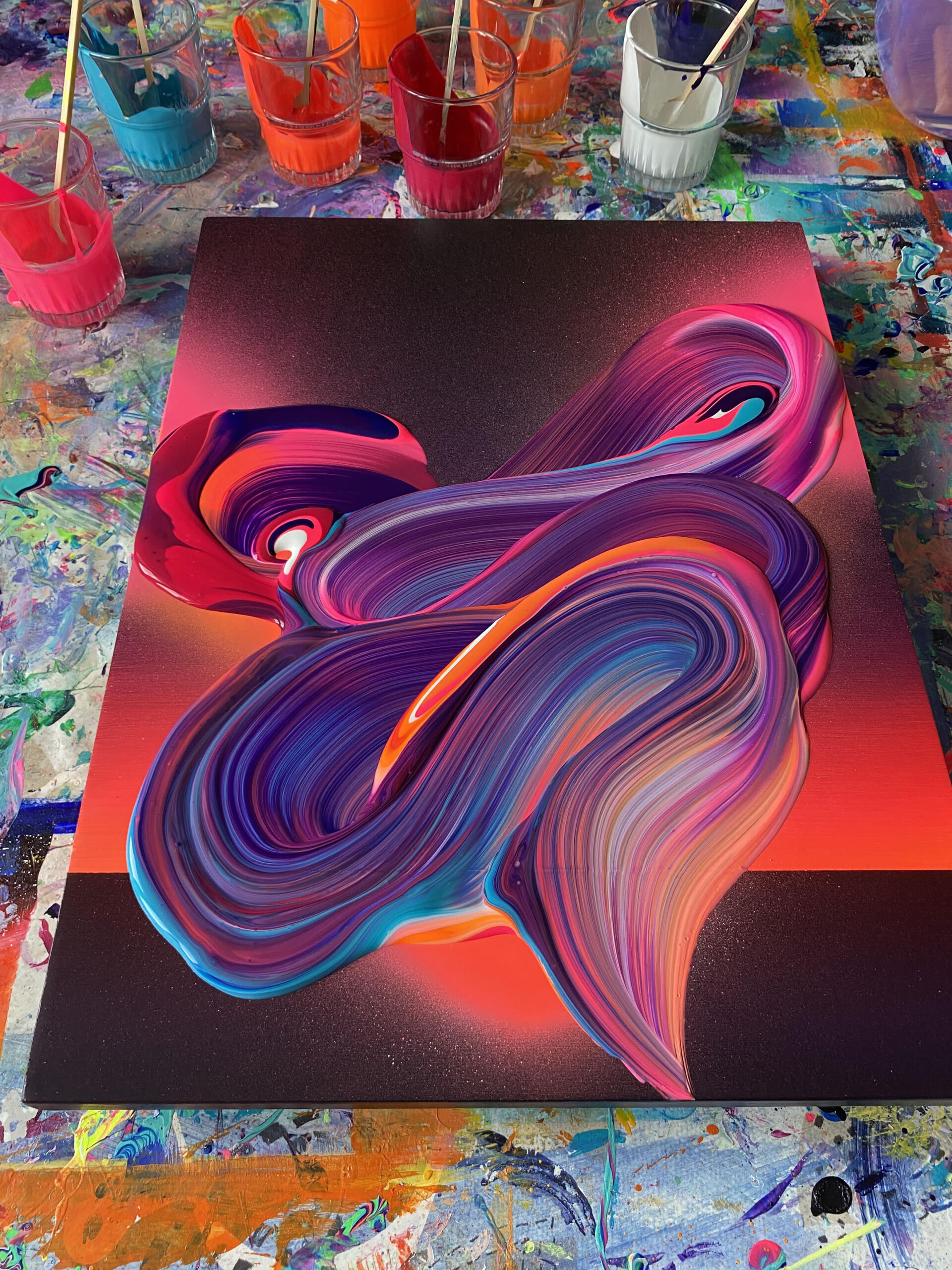 Overall I’m impressed with the quality and applicability of Jackson’s Pouring Medium. The properties of the medium are highly beneficial to my technique, and that, coupled with being extremely good value for money compared to other high quality professional Pouring Mediums, may make it – along with some of Jackson’s Cradled Painting Panels– a staple in my art supplies that I definitely recommend to others. 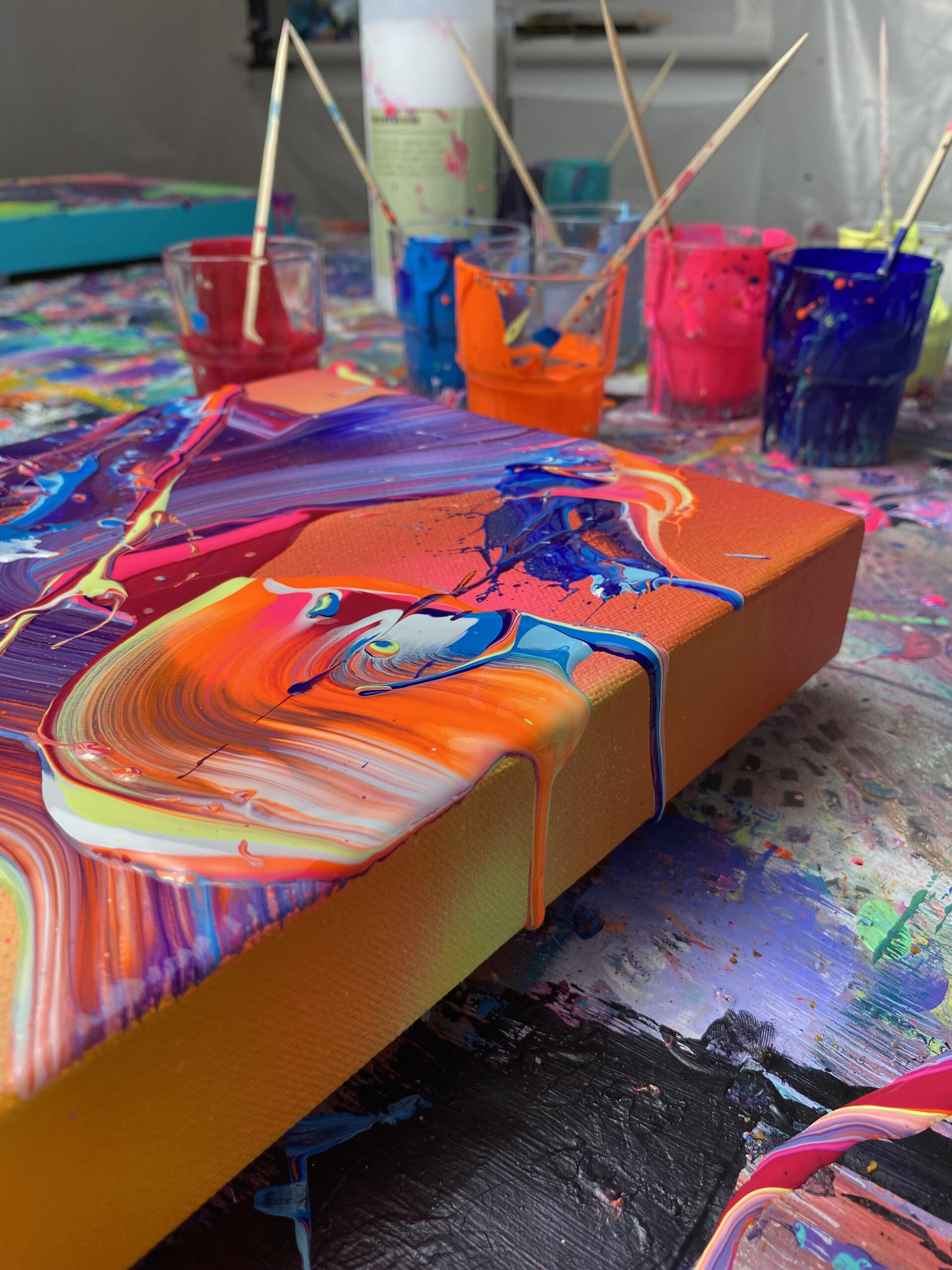 Liz Clarke is a self-taught acrylic artist based just outside of Winchester, UK.

She creates dynamic abstract paintings that burst with brilliant colour, motion and fluidity as she explores and studies movement, colour relationships, striking forms and the materiality of acrylic paint in its different formats. Her work speaks of moments in time, of placing and capturing inner impulses directly onto canvas and emphasising the physical act of painting as an essential part of this process.

Through sharing her processes and finished works on social media platforms, she has since gained global attention and sells her work independently both locally and internationally. 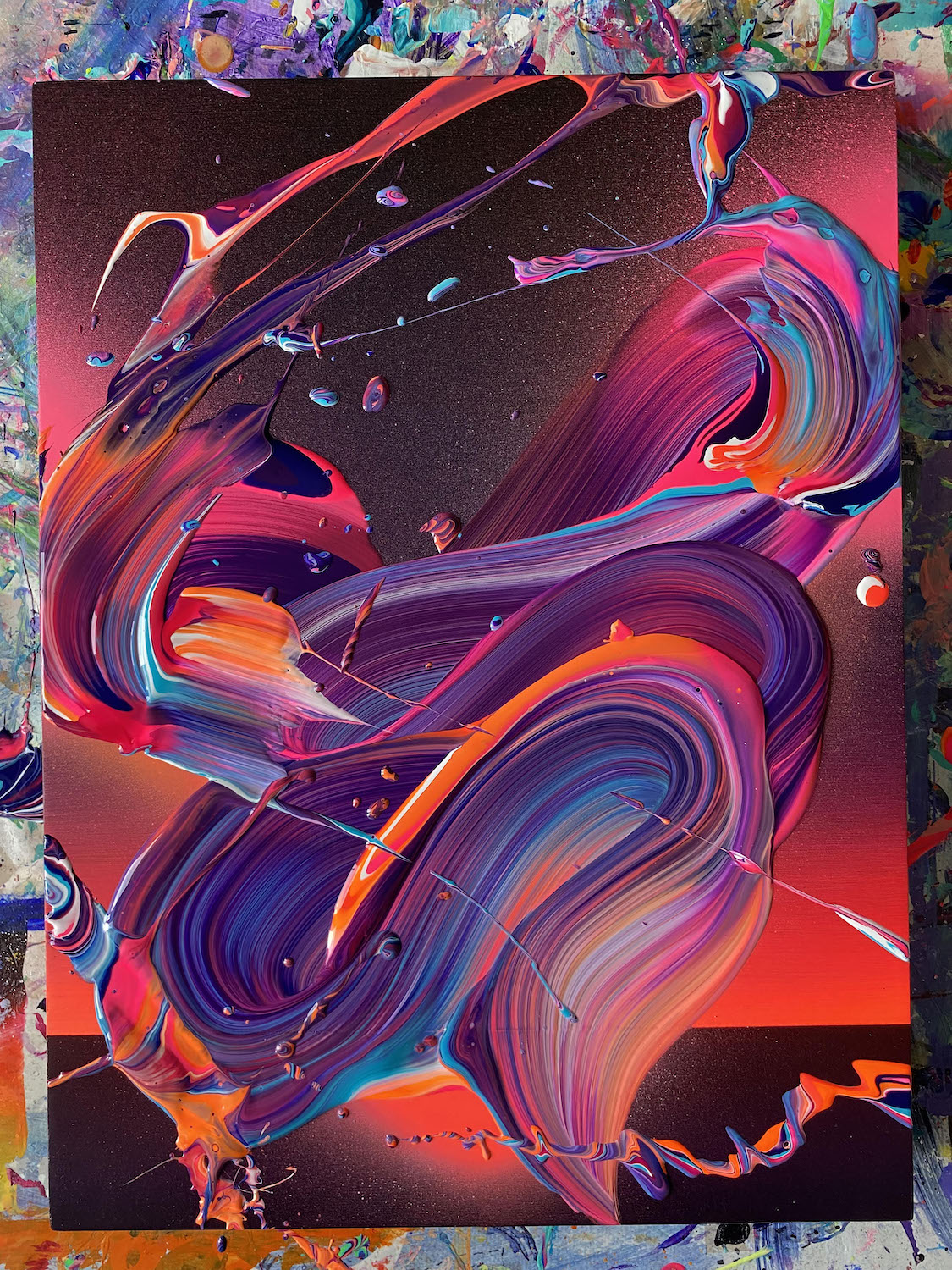 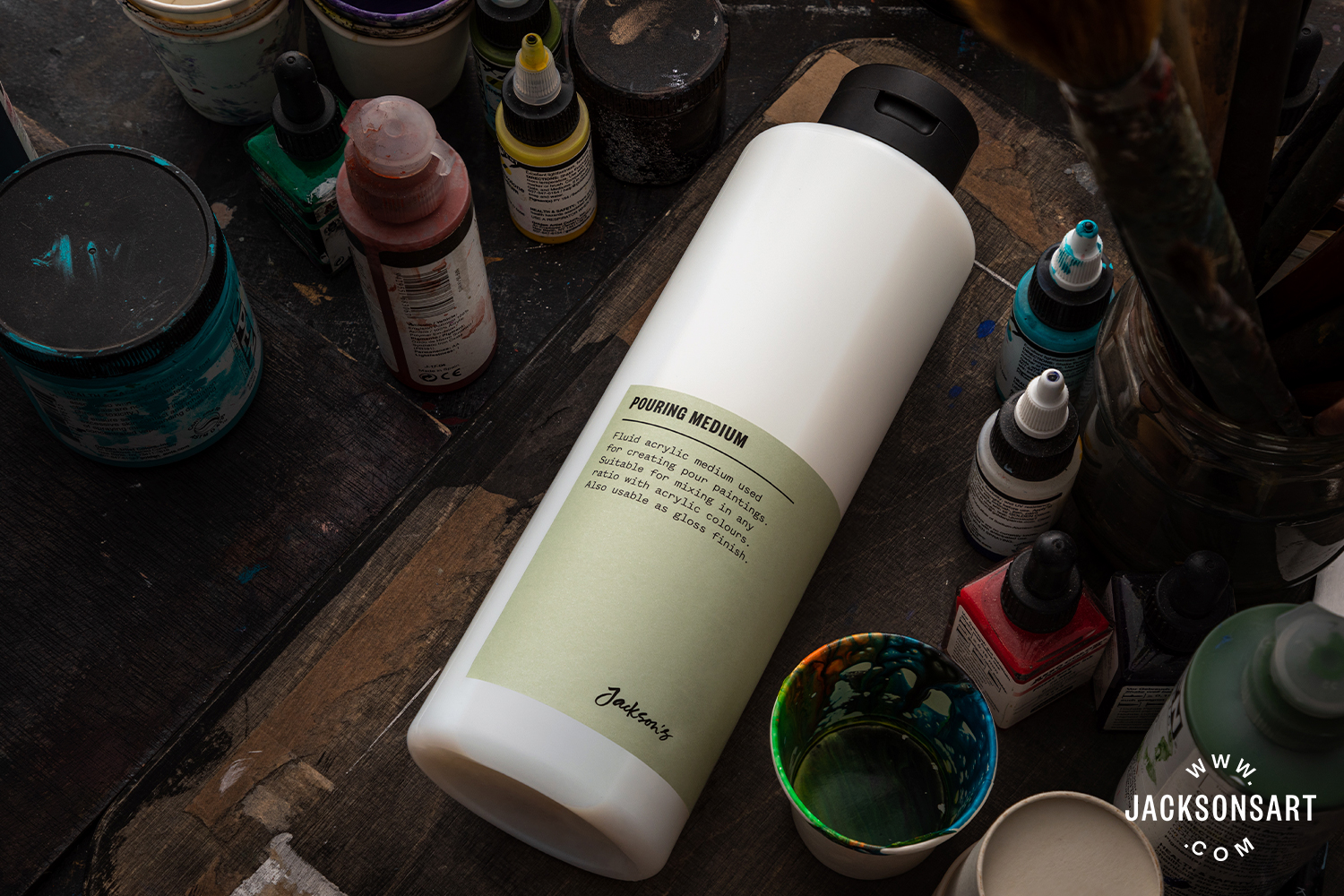 Acrylic Painting for Beginners – What You Need to Get Started

Your Comprehensive Guide to Watercolour Mediums