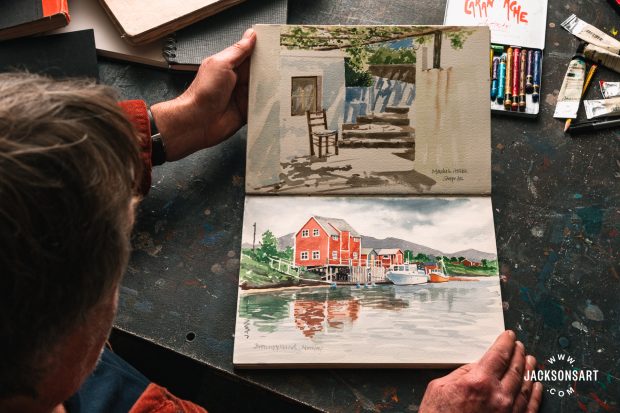 Inside the Sketchbook of Kevin Scully

Kevin Scully is an artist and teacher whose relationship to sketchbooks and drawing has evolved throughout his life and career as an illustrator. Here he talks about returning to his sketchbook practice on his own terms and outlines the materials he prefers to use in his studio or when teaching, in the UK and abroad. 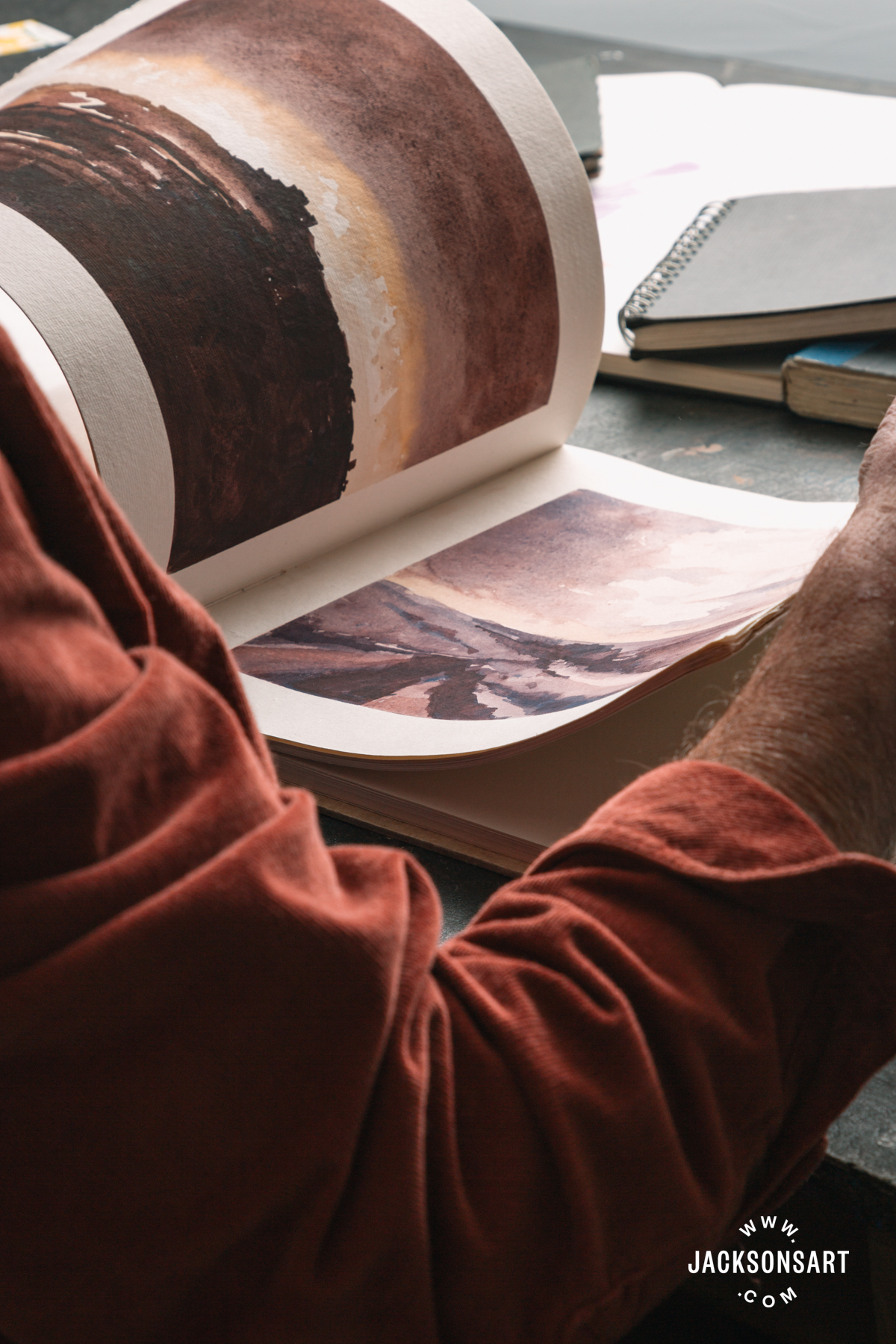 Kevin Scully Takes Us Through His Sketchbook Practice

When I worked as an illustrator I was often required to produce visuals for client presentation, concept boards, and in particular storyboards for TV commercials. For the storyboards you had to be able to draw well and at speed, and often from memory and imagination before the internet appeared and reference material could be found instantly. The time spent life drawing at art school proved invaluable, as my commercial work usually involved a lot of figure drawing. The work was often pressurised and I would sometimes spend days and nights just drawing, drawing, drawing. The storyboards were often drawn in a rather slick, graphic way, but were underpinned by solid and convincing realism. 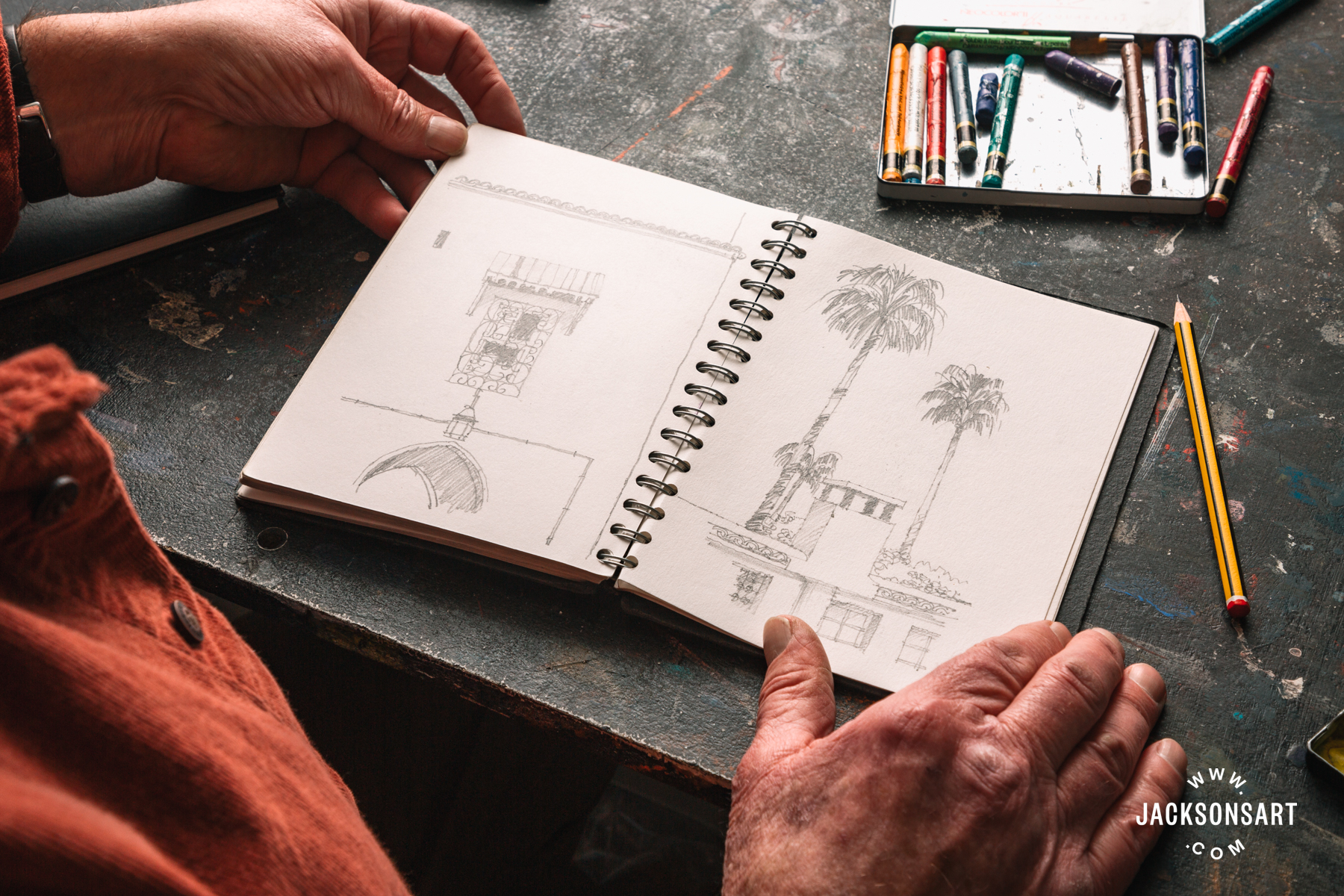 During that period, I didn’t have the need to use a sketchbook, and neither did I have the time nor inclination. Now that I‘m no longer involved in that work I have returned to the sketchbook regime that began at art school where we were encouraged to fill sketchbooks with ideas, drawings, colour notes, and more or less anything that came into our heads. But now I use my sketchbooks in a different way. 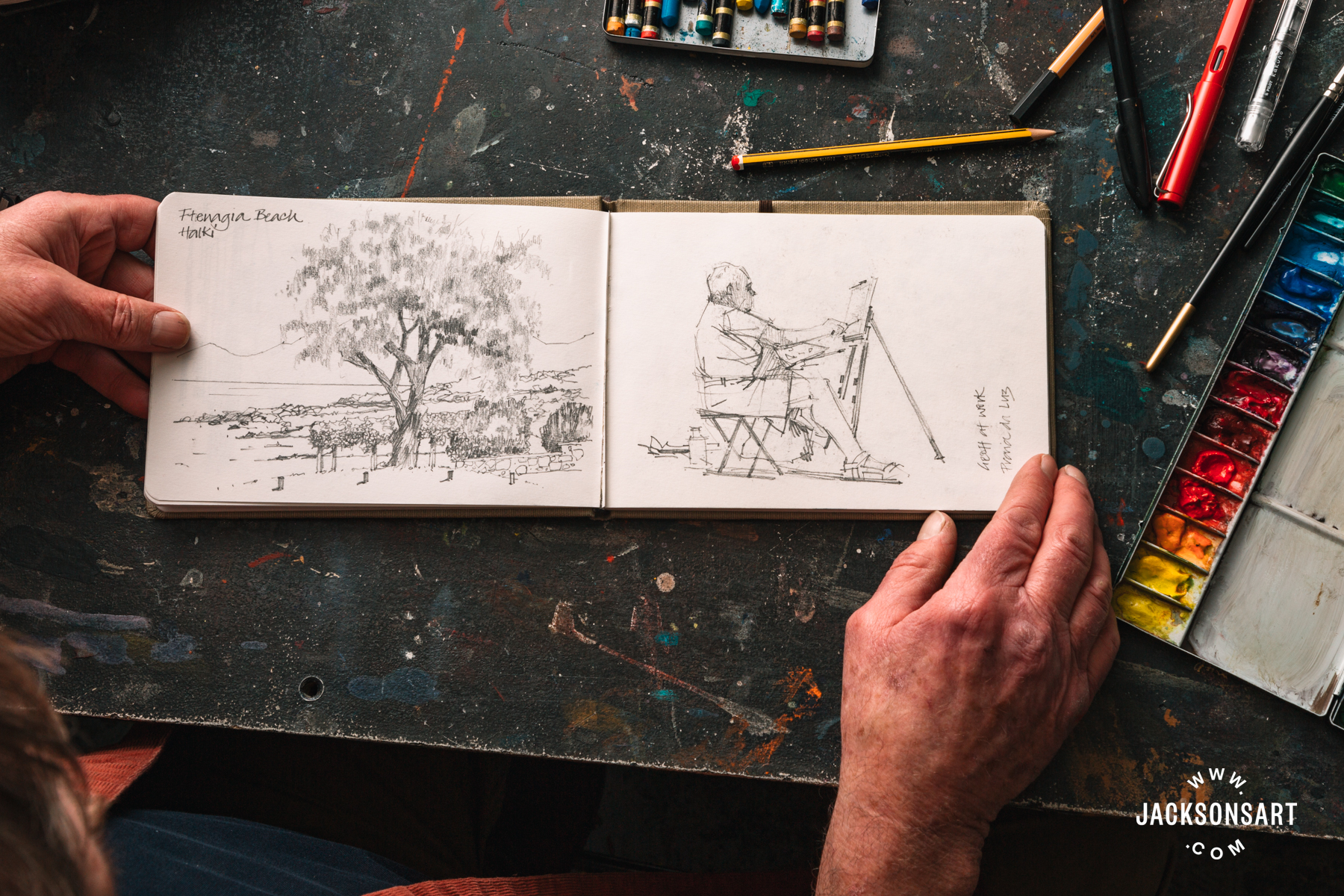 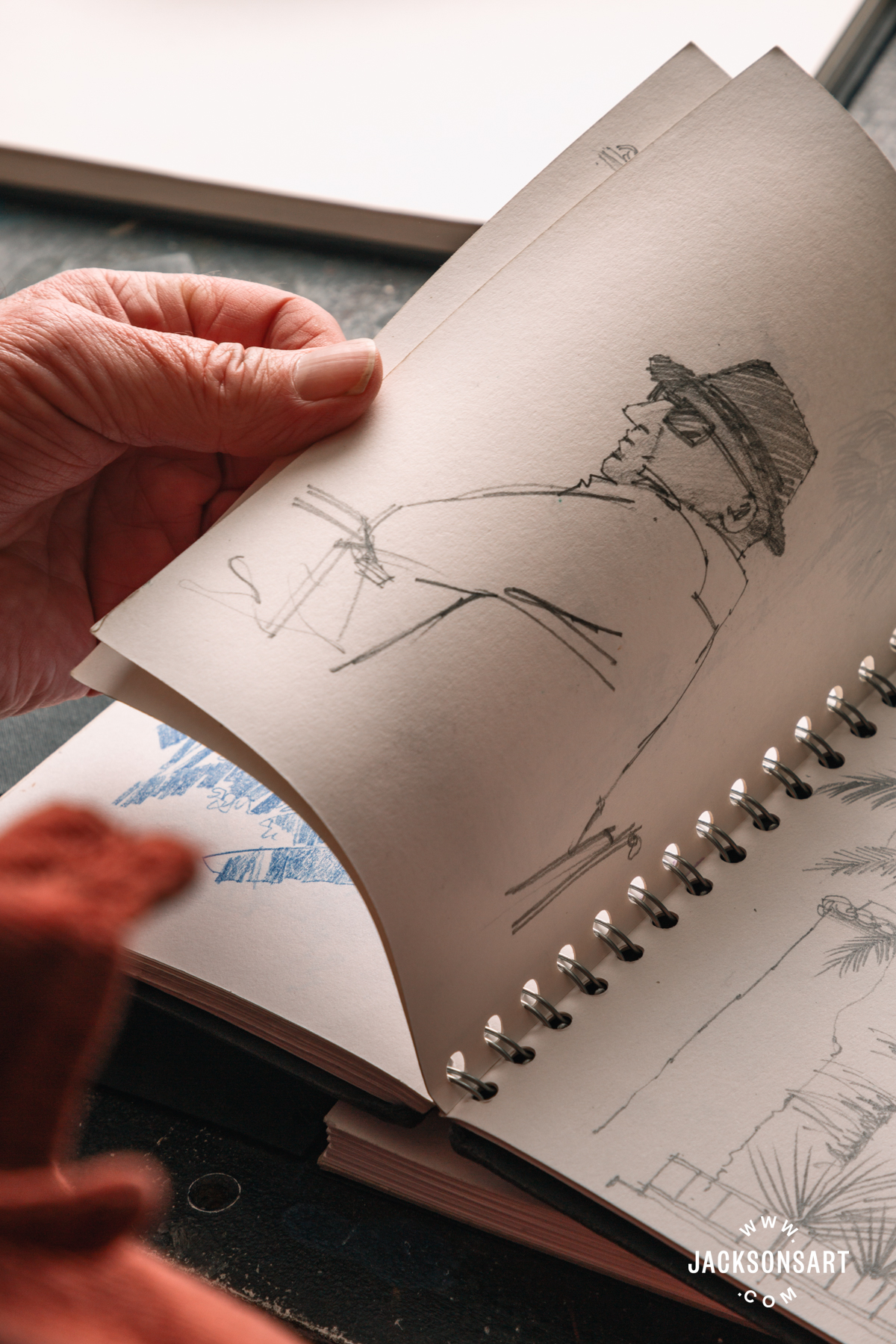 As well as producing my own paintings, I also teach on art courses and workshops, and run painting holidays at home and abroad. Some of the drawings and paintings in these sketchbooks are the product of plein-air demonstrations, whilst others are ones that I’ve produced purely for myself when I’ve managed to find some time in between teaching. I now have the luxury of drawing and painting at a more leisurely and unpressurised pace. A lot of this work has been created simply for the sheer enjoyment of sitting down and studying the subject matter for myself. Most of these drawings will never be taken any further, but there will be some that I will work up into oil or pastel paintings back in the studio, where I will turn them into less representational pieces with perhaps an alternative colour scheme where much of the realism and detail has been blurred and sometimes abandoned altogether. I find this rather difficult to do when painting outside where I’m confronted by so much going on, and instead find it easier when I’m detached from the real world. In this respect, I don’t really use my sketchbooks for experimentation anymore, as I already have some idea of what I’m going to do back in the studio where most of the experimentation takes place. 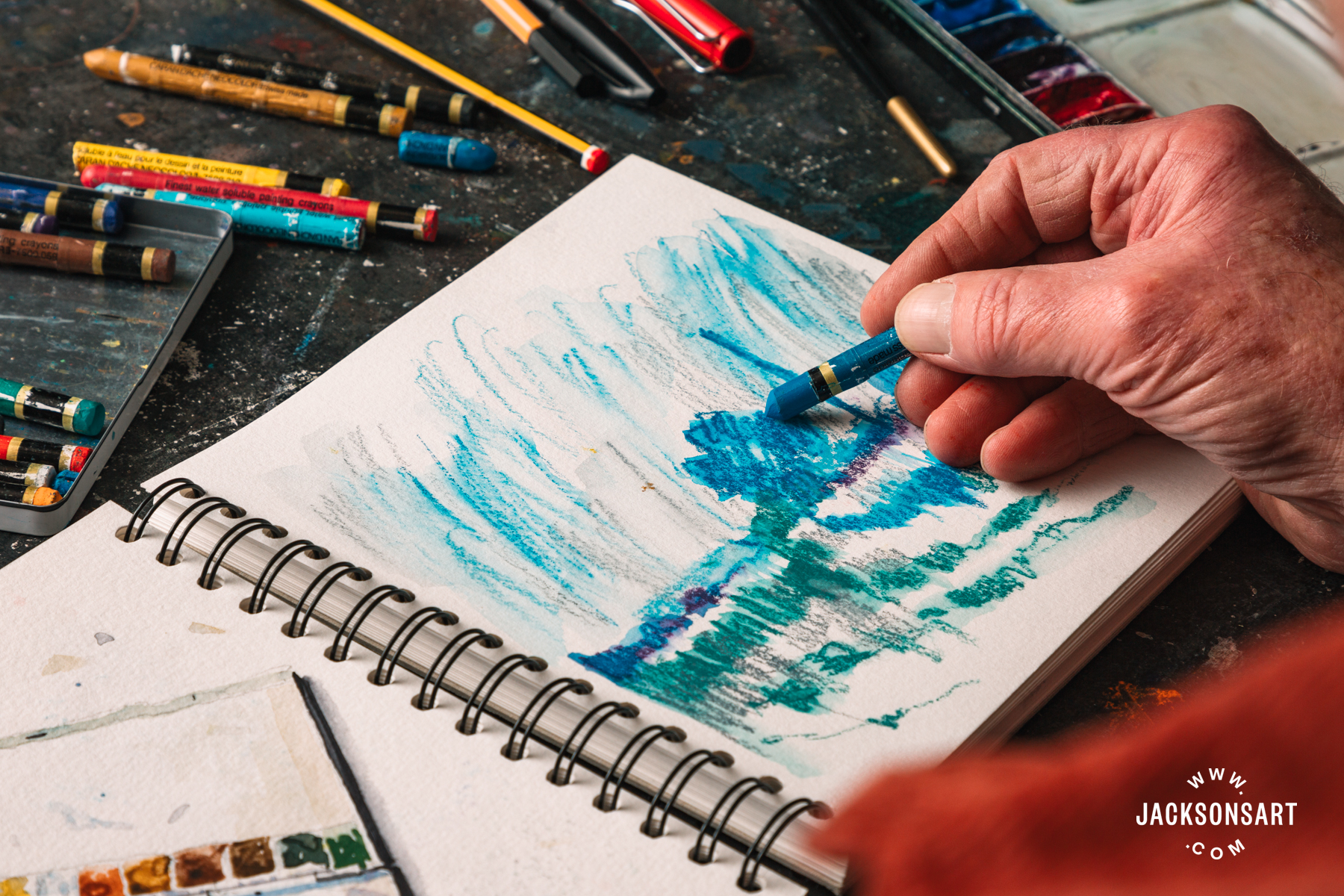 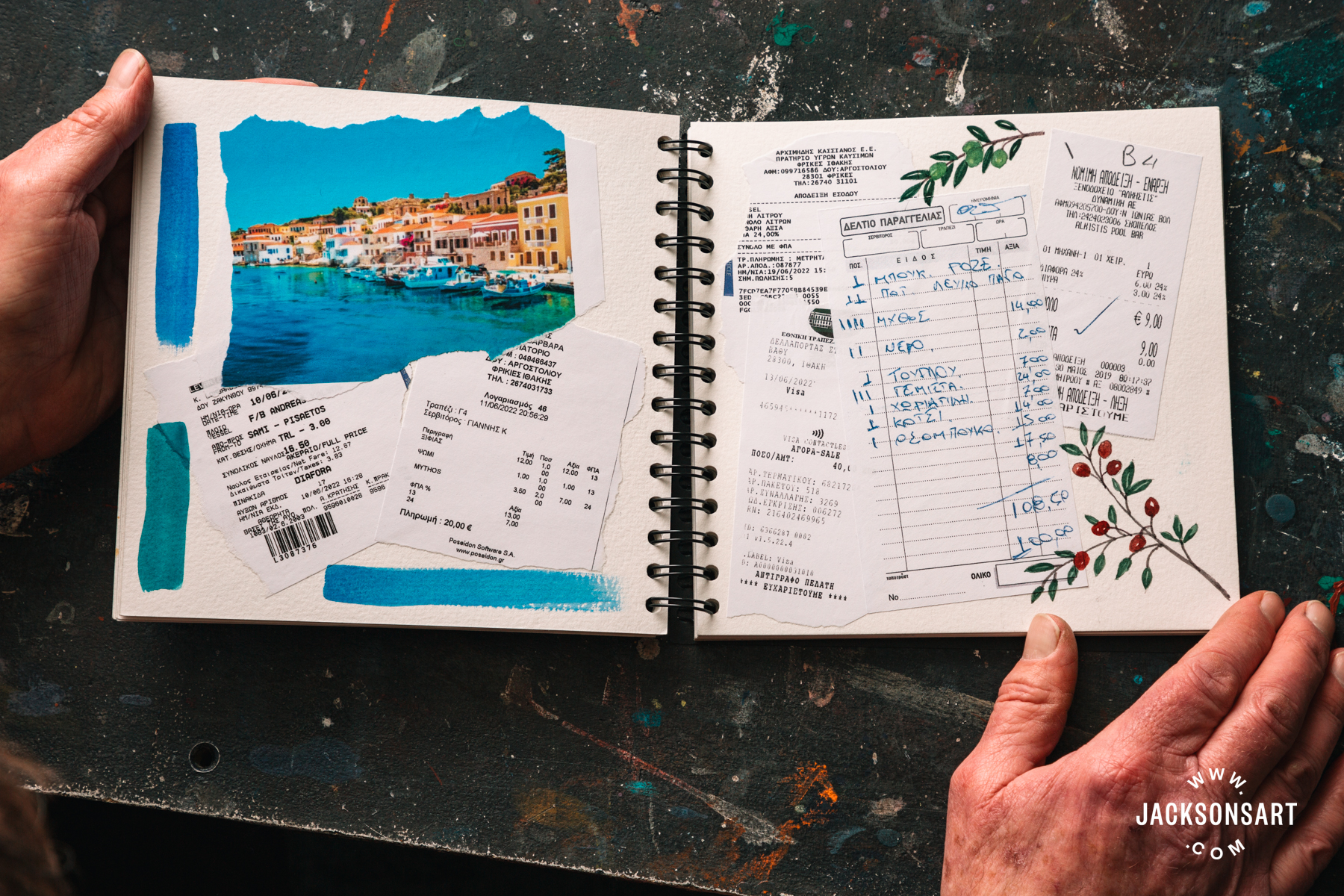 I use different sketchbooks for different things. I have some that I solely use for drawing; mostly in pencil, but sometimes in pen, usually Staedtler Triplus Fineliner, and Pentel Sign Pen, and occasionally in coloured pencil, or anything that I have to hand. I have a few sketchbooks in various sizes for this and most of them were bought on the spur of the moment when visiting art shops. I use Daler Rowney Hardback Sketchbooks in sizes A3 and A4. I have to admit that like a lot of artists I have developed a bit of an obsession with art materials, and with sketchbooks in particular. I even have sketchbooks that I bought years ago, and haven’t had the nerve to use yet, in particular some very rustic, handmade books from Zimbabwe that have the name of the person who made them written on a card inside the cover. I was given a Khadi Hardback Sketchbook by a friend following a painting holiday to India, and it was four years before I summoned up the courage to use it. And even then I started four or five pages in so that I wouldn’t mess up the first page. This paper behaves in a very different way to the usual watercolour papers, so requires a different approach, but the result is still pleasing. 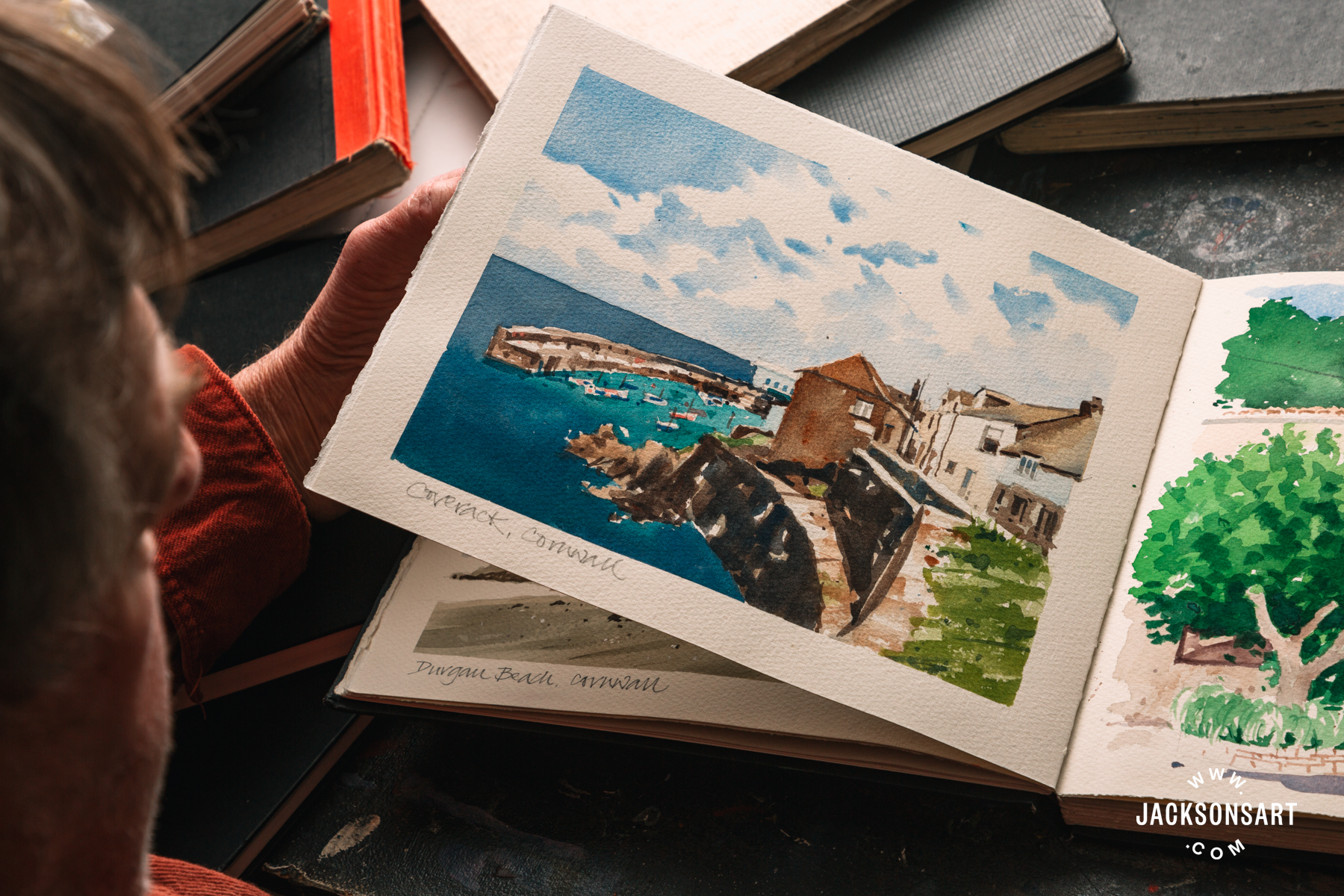 When travelling abroad I use watercolours for coloured work and a pencil and a couple of black pens for drawing. I now only use an HB pencil in my sketchbooks, as I find anything softer transfers onto the opposite page after a while, and in the past I’ve spent many a happy hour erasing graphite from where it’s not wanted. After I’ve done this I give the drawing a spritz of fixative to seal it. I find that if I press hard enough with the HB pencil I can get a dark enough line for the effect I want.

I have some A5 Clairefontaine Goldline sketchbooks that are unusual in that one side of the paper is smooth, and the reverse is slightly textured. In these I mainly use pencil on the textured side and pen on the smooth. 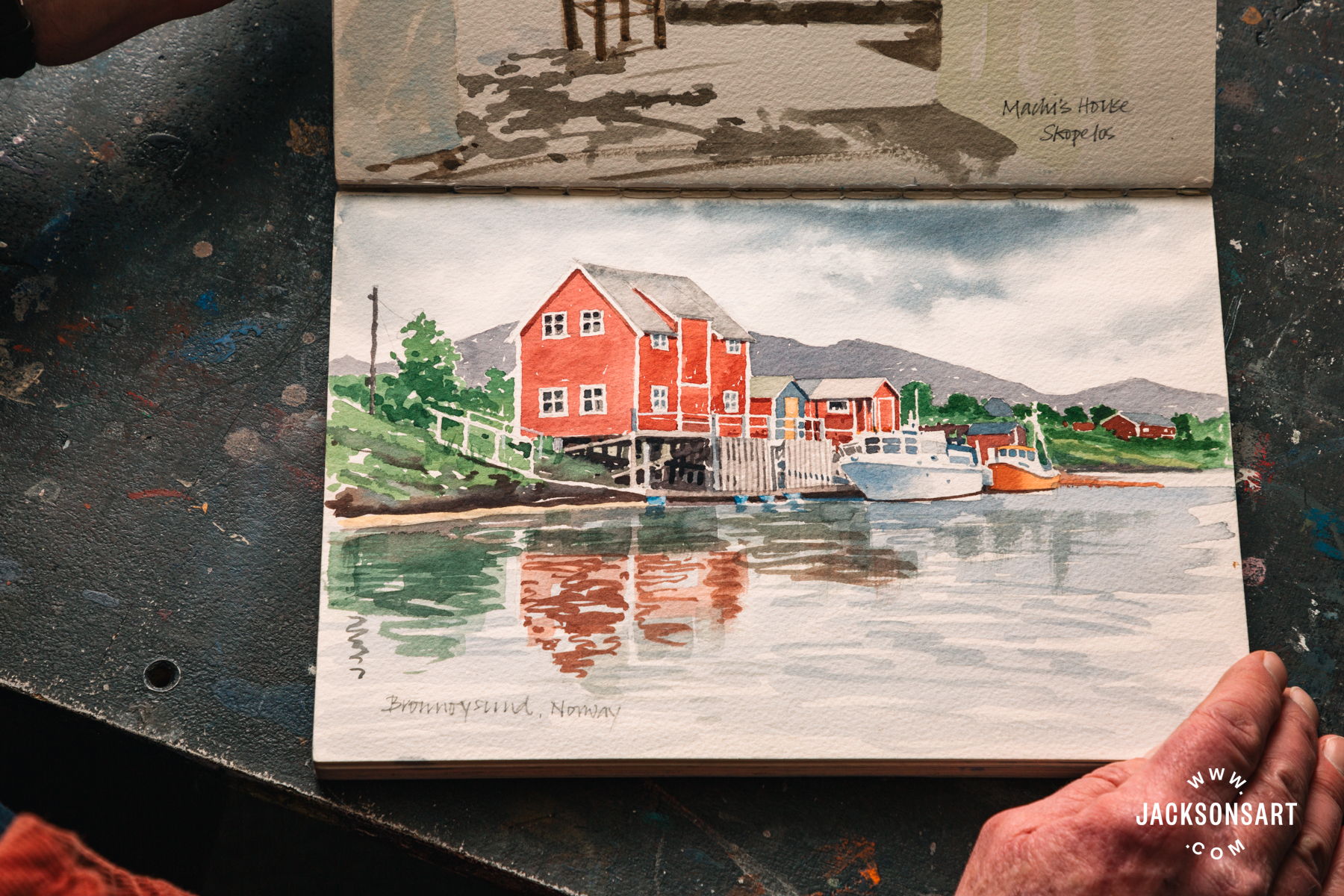 For watercolours I have recently been using a Saunders Waterford Hardback Sketchbook. The paper is 300 gsm in weight and the surface is NOT. This is my preferred paper for all my watercolour work, and I find it very similar to the Charles Roberson Watercolour Sketchbooks that are sadly no longer available. The minor quibble I have with the Saunders Waterford books is that they are neither landscape, portrait, nor square in format, but somewhere in between. The brushes I mainly use are Jackson’s Studio Synthetic and Escoda Ultimo Synthetic. 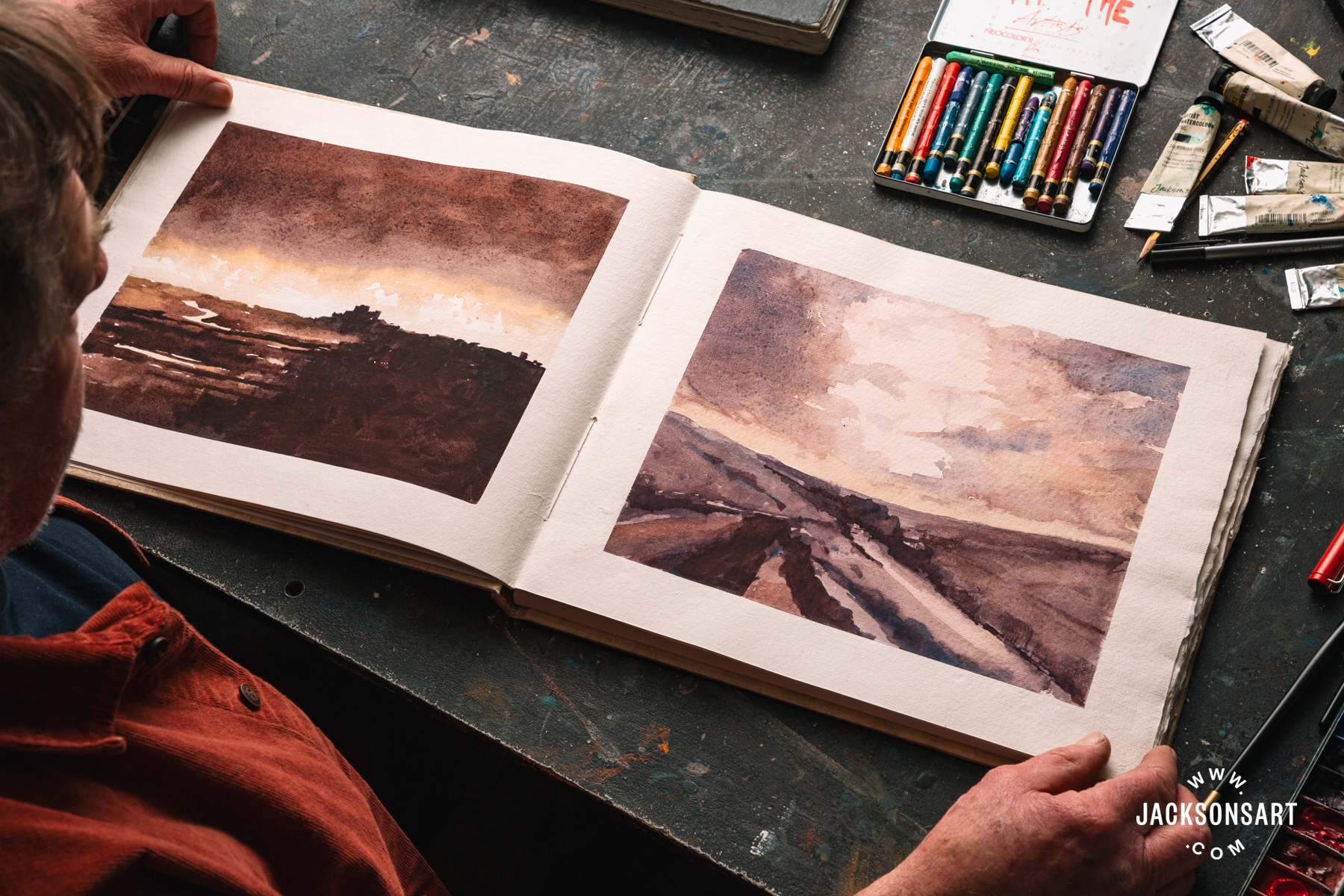 Another minor obsession I have concerns watercolour paint boxes. I have a few of these, which I fill with colour from tubes of Jackson’s Artist Watercolours. I use a lot of watercolour paint and find these paints are of excellent quality and well-priced. When painting abroad I use a lightweight, aluminium Holbein paintbox that accommodates 26 colours. Back in the studio I have an older Holbein 500, which is in heavier steel and a joy to use. I also have a couple of Craig Young paint boxes, individually handmade in brass, which will last a lifetime. 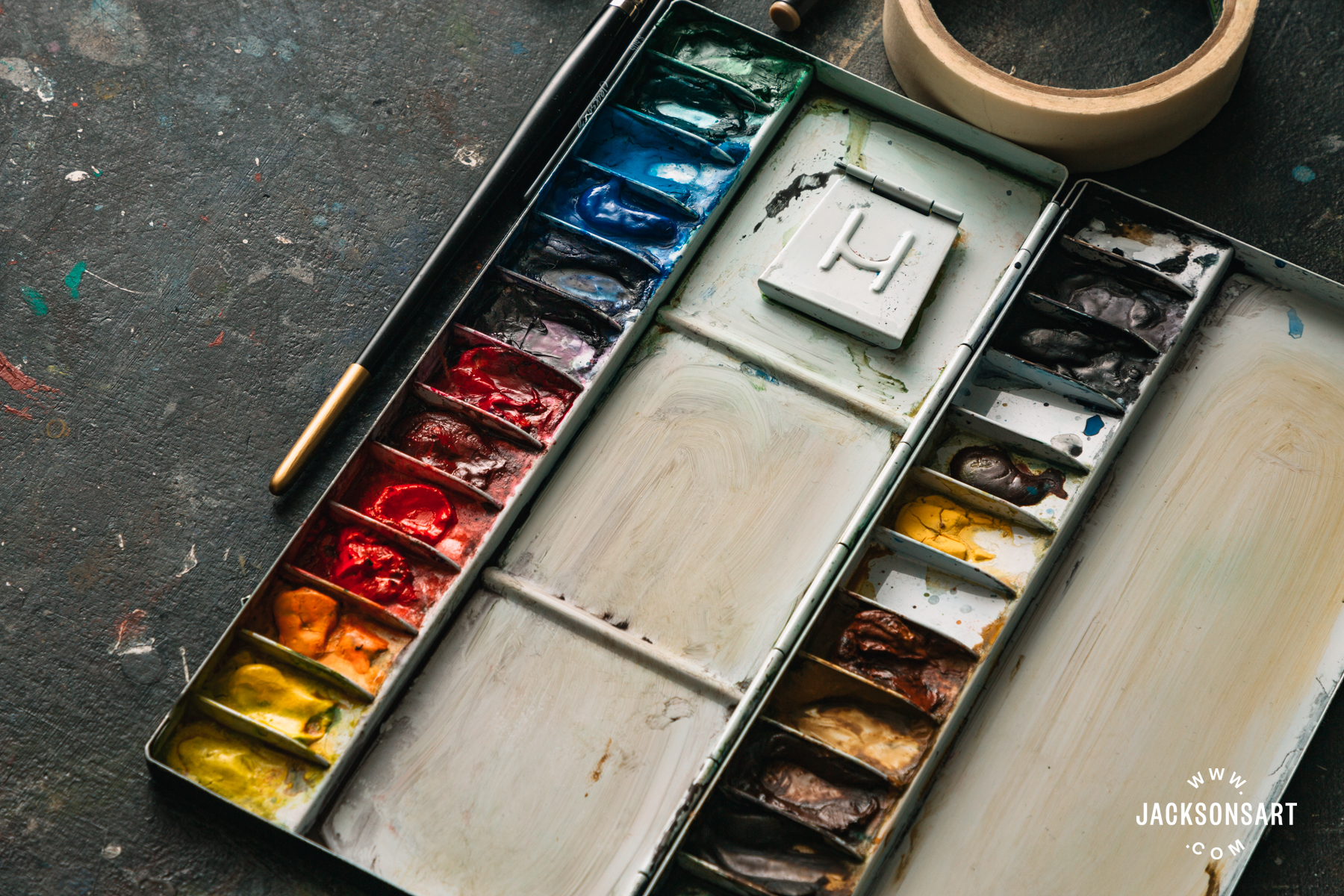 Having spent many years working with markers and pens, I no longer feel the urge to use them, although I still have a collection of several hundred. They are spirit based, so bleed through ordinary paper, which is of no use in a sketchbook. I do however occasionally use Winsor & Newton Watercolour Markers, and Caran D’Ache Neocolor 11 Water-Soluble Wax Crayons for adding a bit of colour to drawings. I’ve never felt the urge to make handwritten colour notes, as I find it easier to simply add the right colour in the first place. 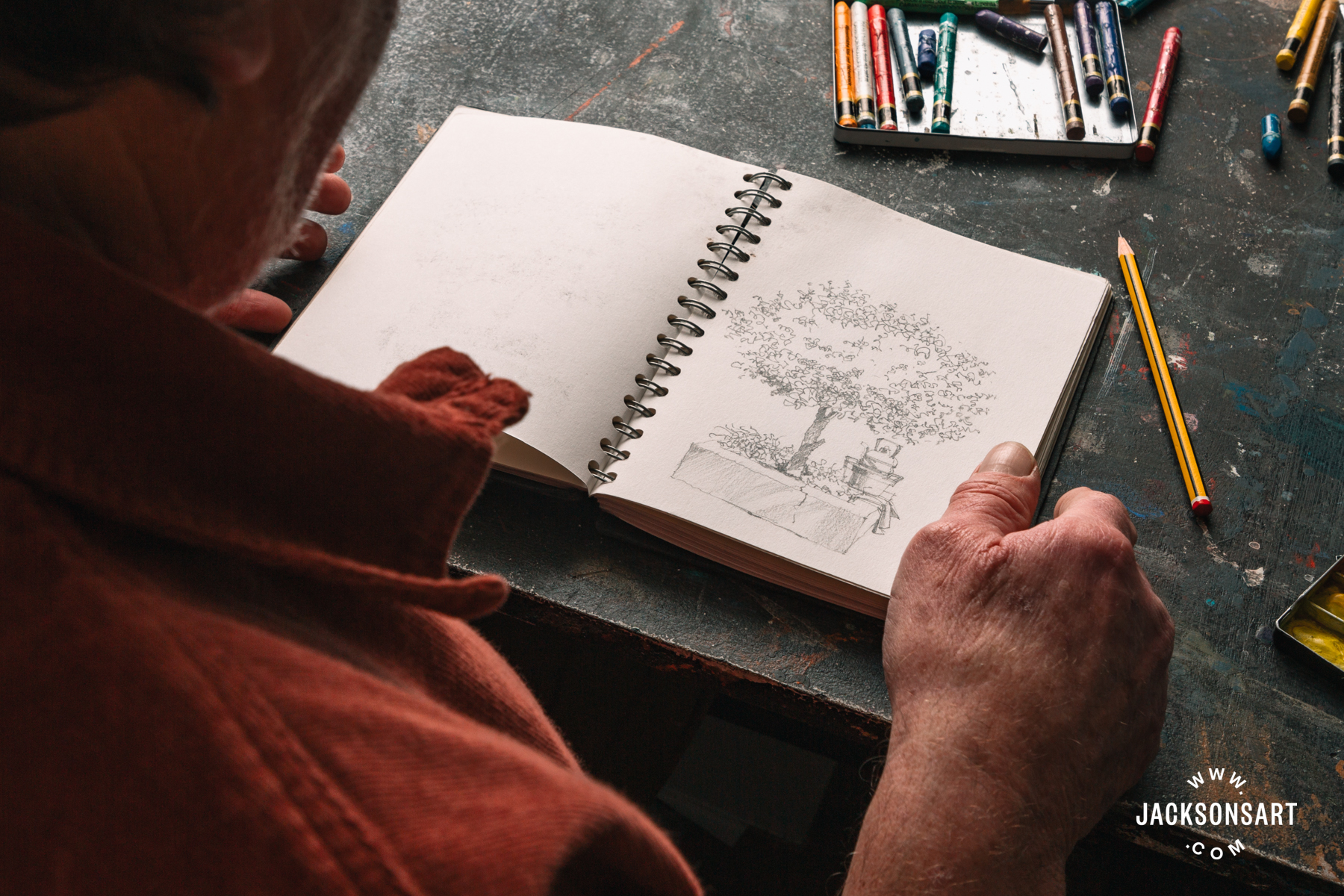 Some of my sketchbooks are full but some are not, because I’ve been seduced into buying another one that I don’t already have. Sometimes I wish that I’d kept the work in them in chronological order, but I don’t like to be regimented in my art and am much happier working in a certain degree of chaos. Within the pages of these sketchbooks there’ll be drawings made in Cornwall three months ago next to a watercolour painted in Madeira four years ago. 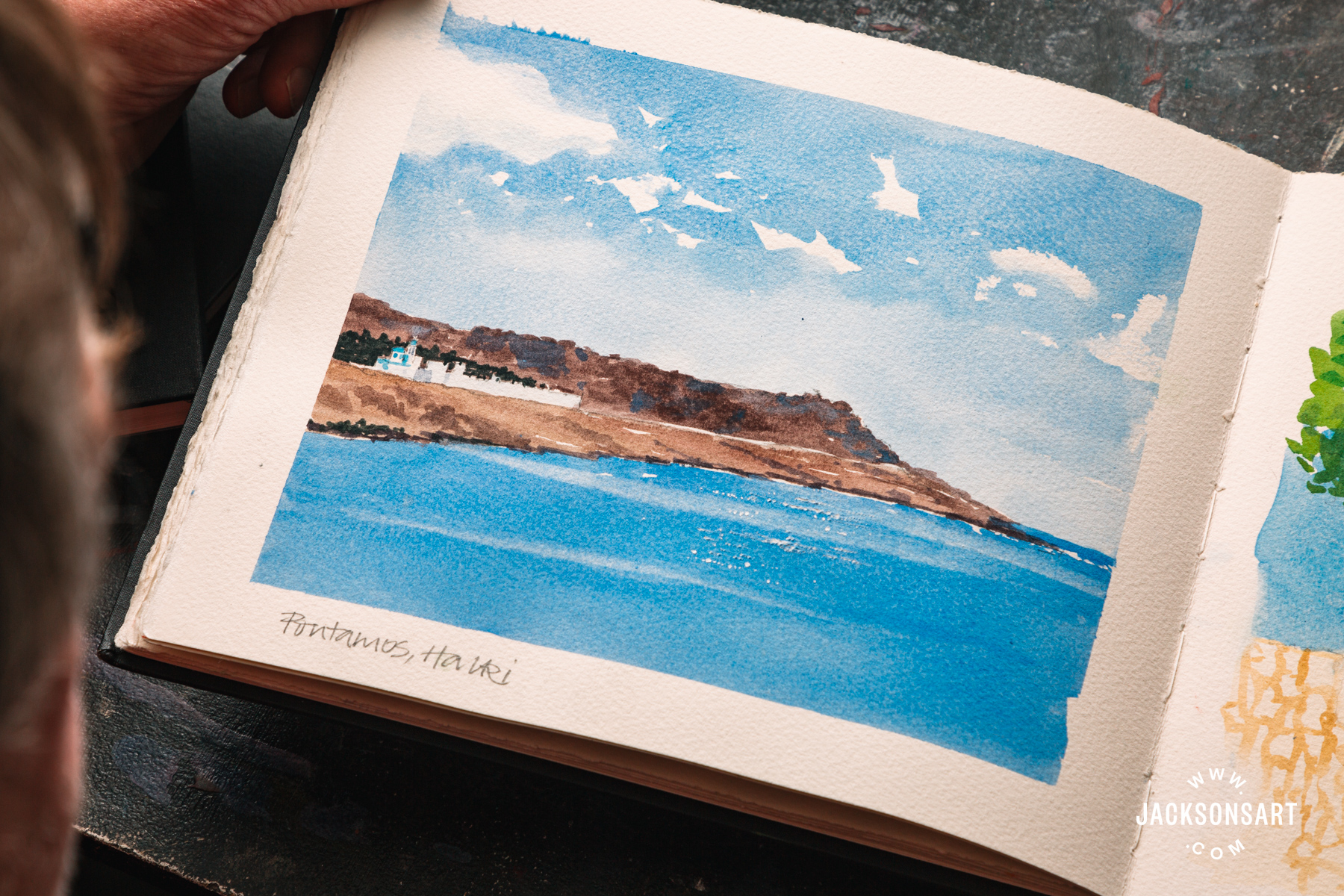 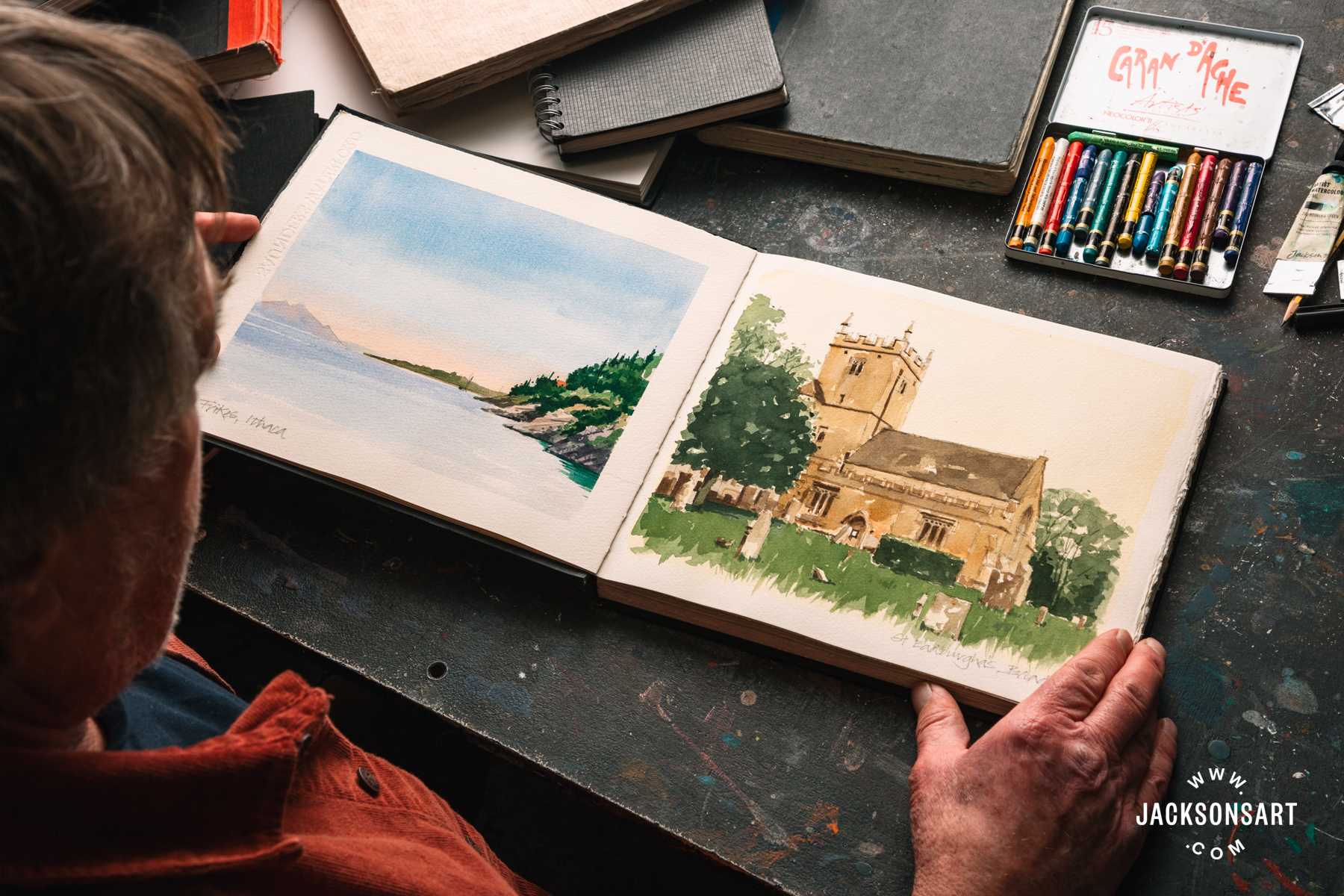 When I feel the urge to draw or paint something when there’s nothing around to inspire me, I just choose my own paint box and brushes, and have several versions of these in my sketchbooks. When I teach workshops on keeping a sketchbook, one of the things I suggest is to keep it as a record of travels and experiences, where receipts, bus and ferry tickets, and anything else you accumulate on your travels can be stuck in. You can also add relevant sketches to these pages as an aide-memoire of your travels. A sketchbook is a personal thing, and you can fill it with whatever you want. 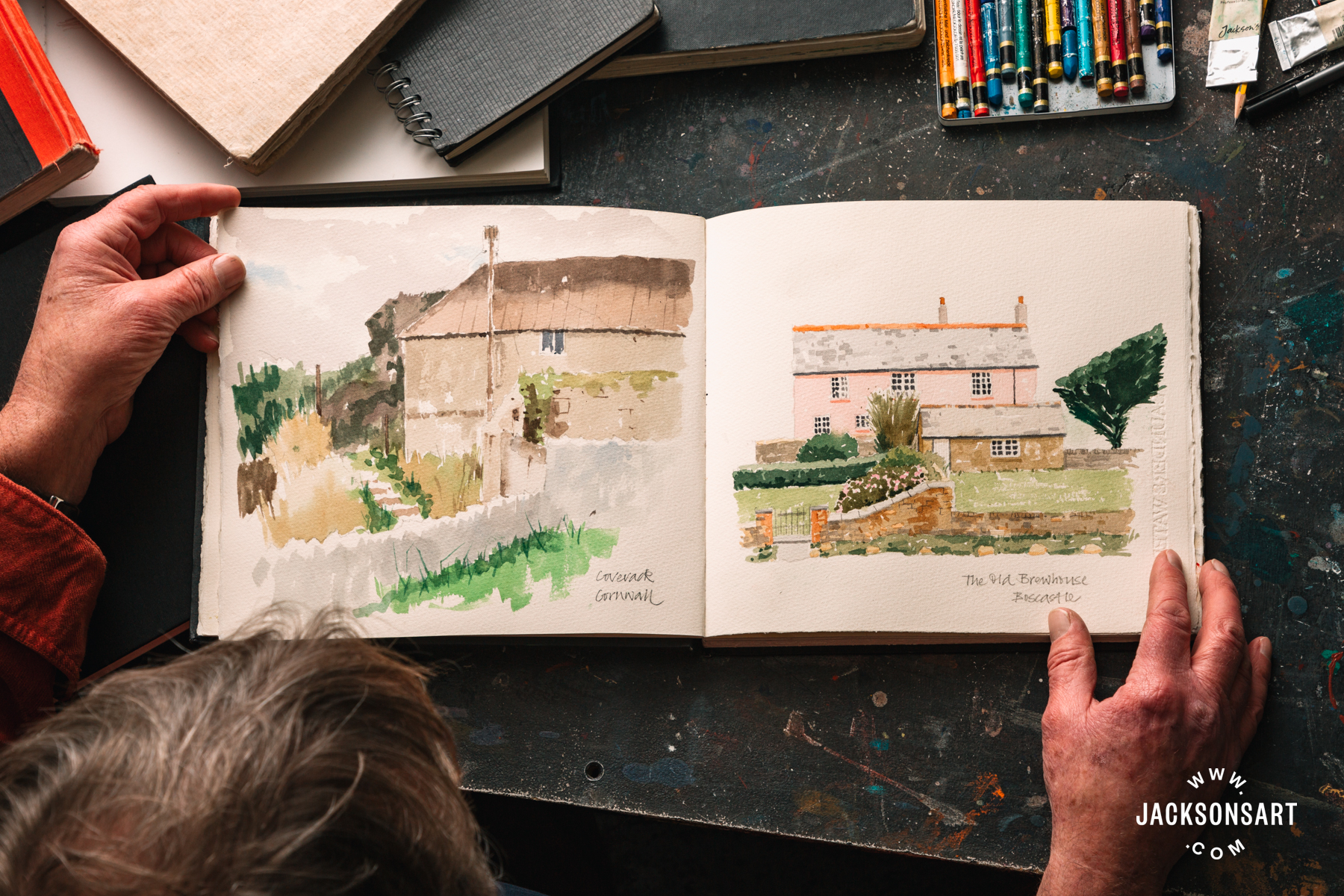 Kevin trained at Wimbledon School of Art and spent several years working as a scenic artist in the theatre, and then as an illustrator in advertising and publishing. Although basically a figurative painter, time and experience have led him to find new ways of saying more with less. In his paintings, as much detail as possible has been eliminated, with the elements contained within them being suggested rather than specified. His work encompasses a wide range of subject matter, and he aims to produce paintings that contain just the bare essentials, and devoid of too much unnecessary detail. Edges are often blurred to diffuse the real from the imagined.

His work captures the fleeting effects of light, and in particular, atmosphere. He adopts the same lively approach in his paintings when confronted with a moody, misty landscape in the northern hemisphere, as he does when experiencing the heat and blinding light of more southerly climates. He has lived and worked in The Caribbean and The Canary Islands, and has run painting holidays to Spain, Portugal, France, Turkey, Greece, Morocco, Malta, and India. He has written several books on painting and is a frequent contributor to ‘The Artist’, and ‘Artist & Illustrators’ magazines. 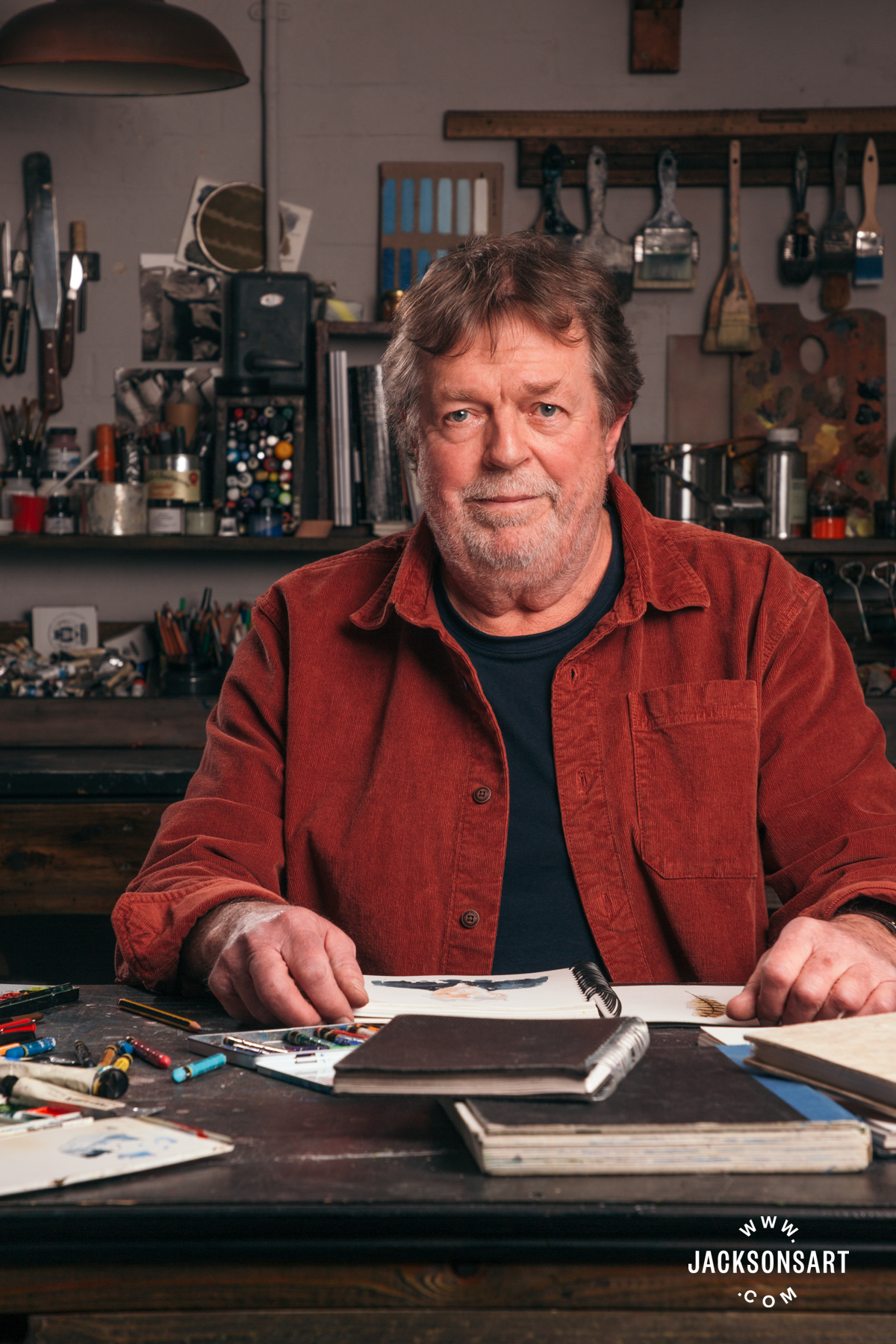 Inside the Sketchbook of Akash Bhatt

The Relationship Between the Artist and Their Materials

Inside the Sketchbook of Sarah Dyer