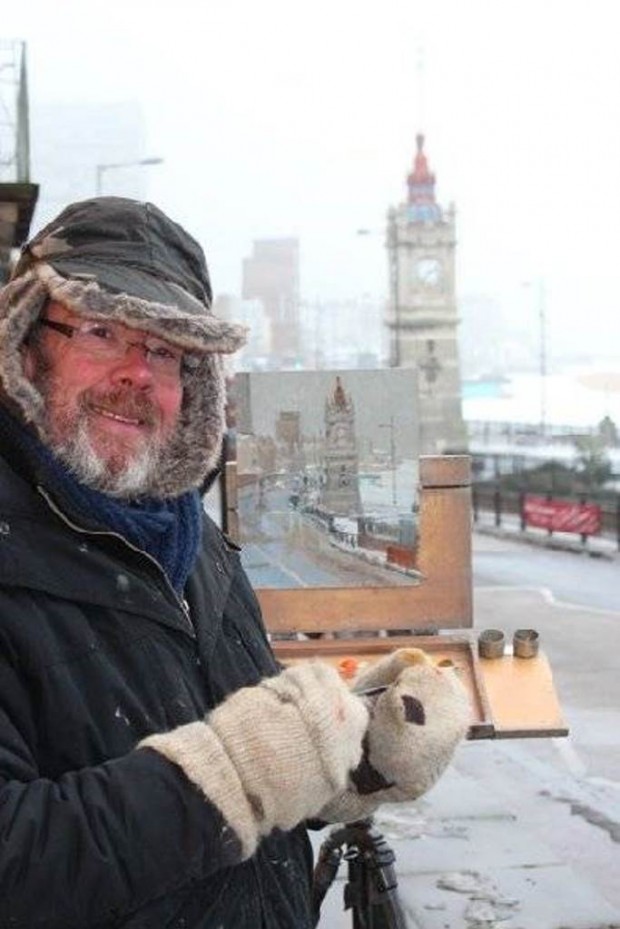 Michael Richardson: From the UKs Bleak Winter to the Bright Sun of Morocco

Michael Richardson is best known as a plein air painter. He spent the majority of his childhood growing up in Suffolk (aka ‘Constable Country’), and went on to study art at Ipswich School of Art.  Since 1992 he has been painting full time, and is a member of the famous Wapping Group of Artists.  He has exhibited at the Royal Academy of Arts, The Royal Society of Marine Artists, The Royal Institute of Oil Painters and The Royal Institute of Painters in Watercolour. The Jackson’s Art Blog asked Michael to share some of his thoughts about painting en plein air. 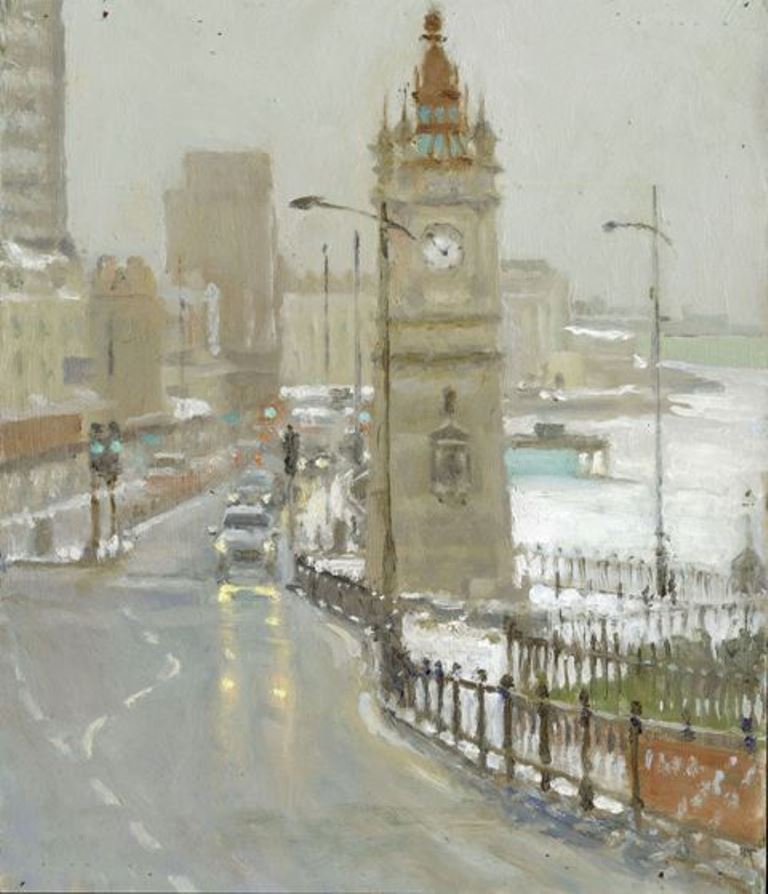 The Clocktower Margate by Michael Richardson, oil on board, 14″x11″

I was introduced to plein air painting while I was at art college. One tutor used to take a few of us out in his old minibus once in a while and abandon us one by one in local fields and villages. The rule was that we all had to paint or sketch at least four pieces of work without moving from a chosen spot in the four or so hours before he returned to pick us up! This was a great lesson as it knocked out of us the idea that there is always a better view around the next corner. It taught us to really look hard at what was around us and I have tried to hold this thought to this day. Once set up I often notice two or three other subjects while I am working and it certainly saves a lot of time! This experience also helped me to understand why I had always been so disappointed with my early efforts with a camera (Brownie Box admittedly!) as the photo seldom “took me back there” in the way that I hoped that it would. I realised then that the painter could convey a scene in a sketch more convincingly than a machine with a roll of silver coated celluloid inside it. No more black shadows, no more bleached skies, no more “flattened” perspective…a “Plein Air” landscape painter was born. 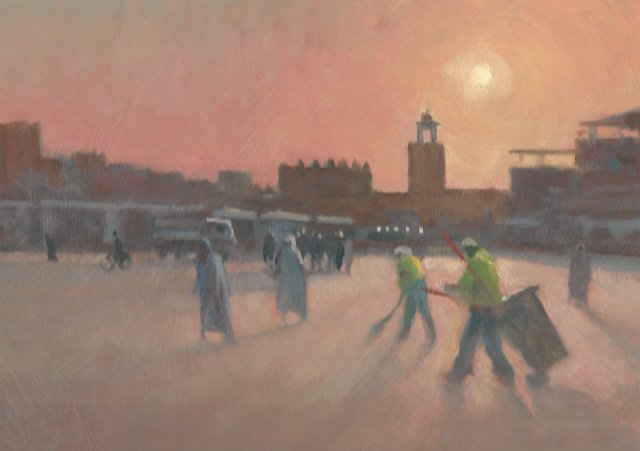 Dawn, Marrakech by Michael Richardson, oil on board, 10″x12″

Landscape painting “sur le motif” is a process of intense observation during which thousands of decisions are made subconsciously “on the fly” and all will affect the final outcome. The process in itself does however enrich ones life in another way in that all the observation improves one’s own perception of the world around us. Many times when painting in a public place I have been approached by someone who may walk to work down that street every day. The comment is often to the effect of “I never noticed that before”! I am certain that the observer of a painting can tell if it rings true and I find when I visit exhibitions that out of all the work on the walls there are always a few that have this elusive element that I refer to as “truth”. The consequence of careful trained observation. Painting allowed me to make my own tonal comparisons enabling a depiction with more “truth.” To this day I regard tonal evaluation to be the foundation of fine painting. All my heroes, Sargent, Sorolla, and in this era, my friends and colleagues in the Wapping Group Trevor Chamberlain and Geoff Hunt, and of course Ken Howard all exhibit this ability to judge tonal values in the most exquisite and convincing way. When teaching in my plein air workshops I am always surprised how many quite advanced painters do not have a sound grasp of this vital aspect of painting so I always give quite a lot of time to “tonal values” before moving on to the other modules. 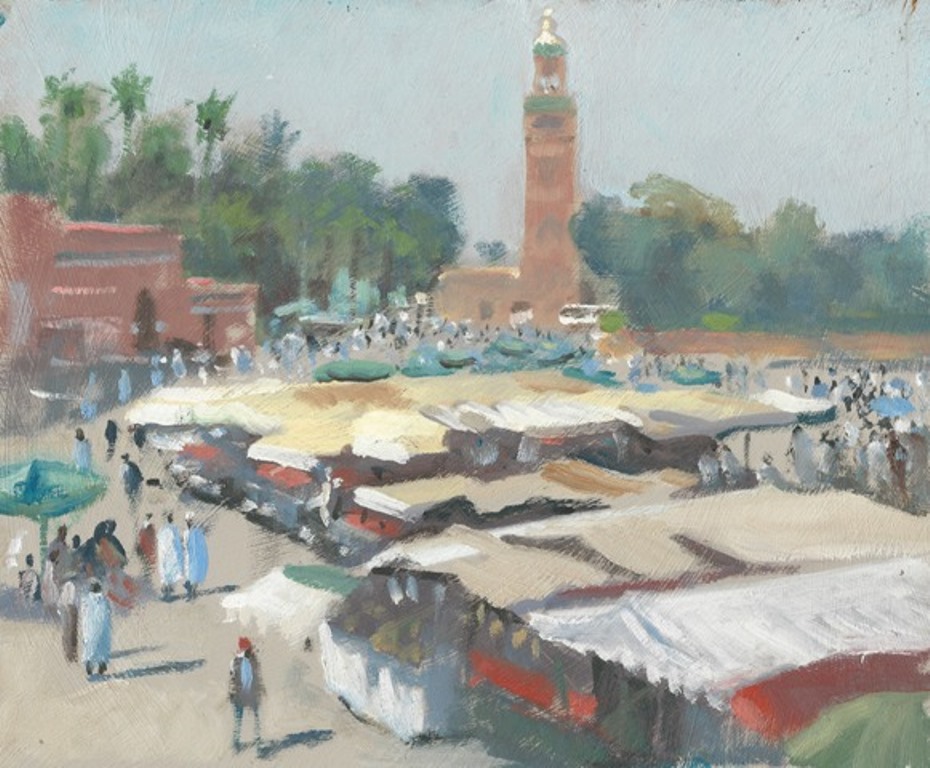 The Market Square, Marrakech by Michael Richardson, oil on board, 11″x14″

I am actually more interested in painting the day than the place. Every day is unique and it is fun to revisit a familiar place to paint it again at a different time of day or in a different season. I want the viewer to know when I was painting just as much as “where”! Recently I visited Marrakech for the first time and it was a short visit so I chose not to stray far from the main square, the Jemaa el Fnaa. 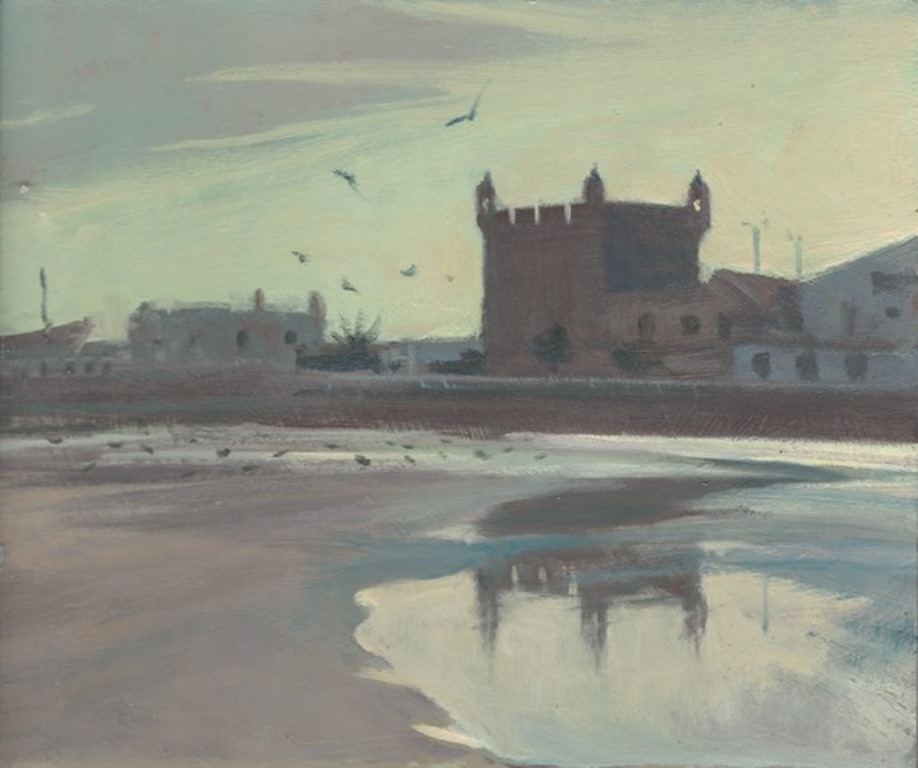 The Harbour Fort, Essaouira by Michael Richardson, oil on board, 10″x12″

As always I travelled light, even leaving Michael Harding’s paint tubes at home and taking enough paint for the trip in plastic pill boxes from Boots! My palette consisted of Titanium White no2, Unbleached Titanium, Transparent Oxide Red, Cadmium Red, Venetian Red, French Yellow Ochre, Cadmium Yellow, Cobalt Blue, Cerulean Blue and Kings Blue Deep. My easel was an old aluminium watercolour tripod with a home made palette attached. It was also a good chance for a final field trial of my own Advanced Plein Air Brush set from Rosemary and Co Brushes* before they went on the market. Verdict? Absolutely wonderful! My panels were all MDF prepared with four coats of gesso self coloured with a little Raw Umber to give a light mid tone which I find helpful in keying the painting. I like a swirly random texture better than the mechanical weave of canvas when working at a small scale. My first morning I was setting up in the dark, quite unaware of the spectacular sunrise that was a few minutes away! 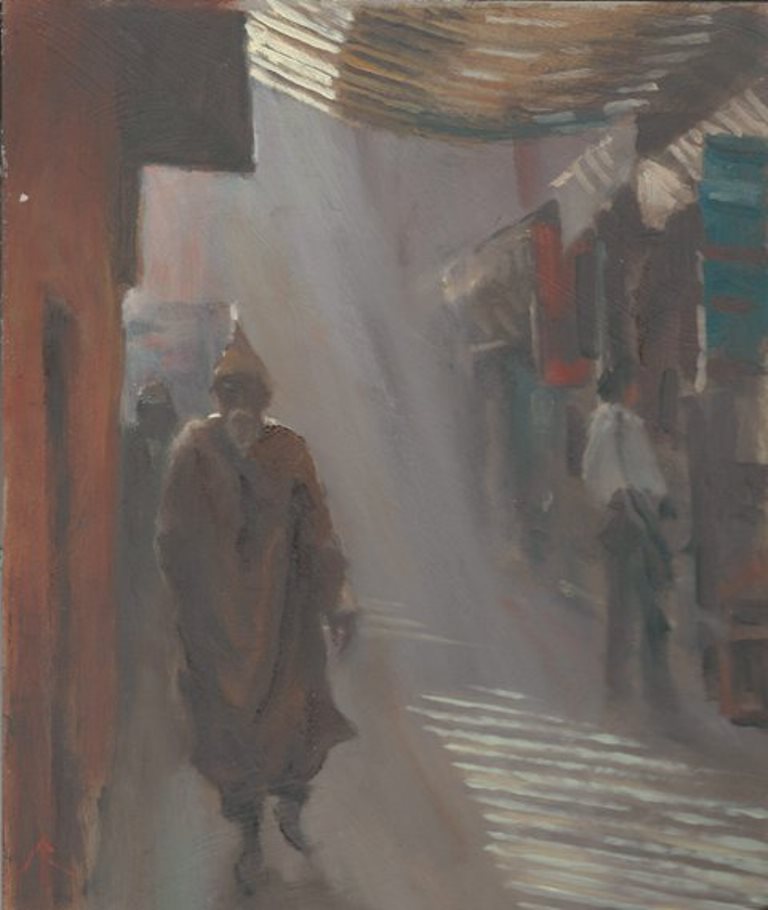 Sunbeams, Marrakech by Michael Richardson,
oil on board,
12″x10″

Marrakech is known as the Red City and not just for the terracotta walls which abound, but for the light effects often caused by the dust hanging in the air from the desert wind, the Scirocco. Later on a cafe where I breakfasted allowed me the use of their terrace for an elevated view of the market square. I ventured deep into the Souks as well but there is little space to set up without making an obstruction. This subject was chosen for the fruit barrow at my back which gave cover from the flying mopeds! 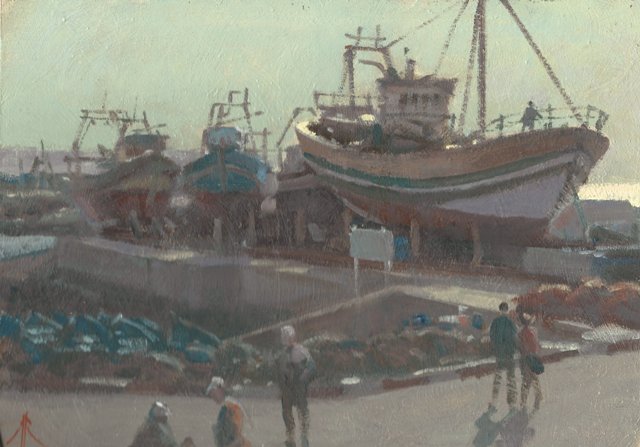 The Quayside, Essaouira by Michael Richardson, oil on board, 10″x14″

Next I visited the coastal port of Essaouira with its Vauban style fortifications and huge fishing fleet. The large boat in the painting was about to be launched and was one of six such boats under construction in the harbour from good old fashioned timber! Sadly the weather was very poor with the worst possible combination of very high winds and rain but I did have one nice day to get a few small outdoor pieces finished!

* Michael Richardson’s Rosemary & Co Brush Sets are winding their way to Jackson’s…if you wish to find out more please place a comment below and we’ll get back to you with more information.