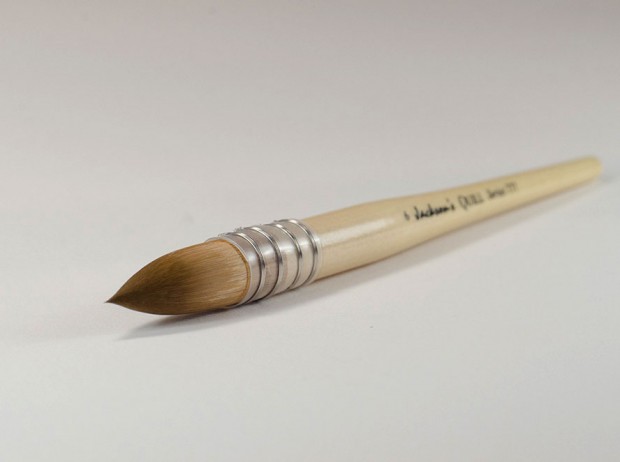 “The quill brush was initially ‘just to try out’… I can now see it becoming a ‘go-to’ for its versatility, comfortable size and it also holds a lot of liquid!” – artist Michelle Lodge

A mix of tradition and modern technology, Jackson’s Icon brushes are a blend of sable hairs and Micro-Synthetic fibres. They represent the advancement of science combined with the classic needs of the traditional watercolour artist. The mottler brushes and the quill brushes are made with all synthetic.

The uniqueness of the Micro-Synthetic fibre is twofold. Firstly the fibres are treated to produce millions of tiny indentations. This increases the surface area of the hairs allowing a much greater colour holding capacity for the brush. The hairs are then treated with a special process that frees the micro-synthetic fibres of any static electricity which makes brush fibres stick together. After which the hairs can smoothly and precisely react to any kind of stroke, either delicate or abrupt. By then mixing these with natural sable hairs we create a brush that behaves like a pure sable but at a fraction of the price.

The Icon Quill brush is made with a synthetic quill and Micro-Synthetic fibres. The full belly is useful for washes and the fine point is great for control. It has just the right amount of softness and spring. It is available in six sizes. It has received rave reviews! 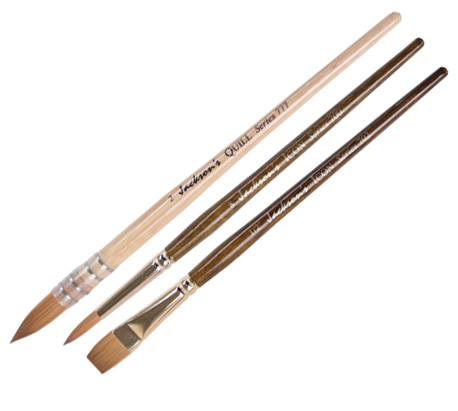 Michelle Lodge has written a helpful review on our website of the Jackson’s Icon Brush Set.

“Along with several other Jackson’s watercolour brushes I ordered this set, which I also made up in to a full set of rounds and the 3/4″ and 1″ flats. I am delighted with all the brushes -and am both surprised and delighted at the shape retention, holding capacity and pointing of the quill brush. I purchased the set knowing that I wanted the round and flat in those sizes anyway, but the quill brush was initially ‘just to try out’… I can now see it becoming a ‘go to’ for its versatility, comfortable size and it also holds a lot of liquid! All arrived in perfect condition, very well protected by plenty of packaging, and very quick delivery. These came in the 1st delivery of 2 I have so far made, and I shall be ordering again soon.”

We’ve chosen this useful review to be the ‘Product Review of the Month‘.

Click on the underlined link to go to the Jackson’s Icon Synthetic and Sable/Synthetic Mix Brushes on the Jackson’s Art Supplies website.
Brush-only orders over £20 have free worldwide shipping.

Julie was the editor of the Jackson's Art Blog for 10 years and now writes for the blog part time. With an encyclopaedic knowledge of art materials (majoring in oils and acrylics), she loves researching and writing pieces for the blog as she learns something new each time. Julie is also a professional artist who studied on the Turps Studio Painting Programme and Camberwell College of Art.

What is your go to Liquitex Acrylic product - Soft

For reliability and versatility, it's hard to beat

With a a rich and heavy texture that is especially

Acrylic painting papers either have an embossed te