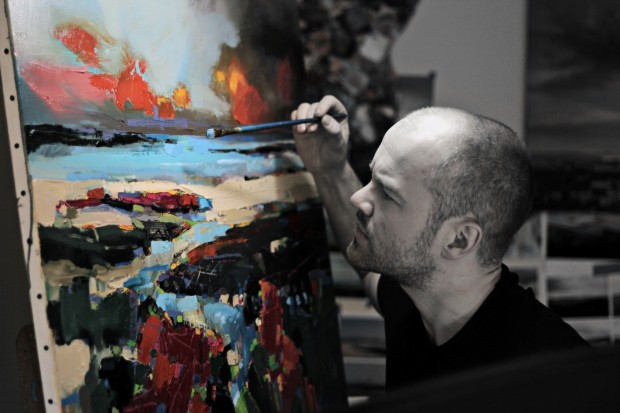 Landscape Painter Scott Naismith Discusses Bright Colours, His Love for Scotland and Life as an Artist

Scott Naismith is a Scottish artist who paints lively, oil and acrylic paintings of his country’s spectacular landscapes. After recently winning a Jackson’s ‘Painting Water in Acrylic’ Competition, we decided to get in touch with Scott to find out a little bit more about his paintings, his style and what inspires those vibrant hues he so often uses.

DG: What made you decide to become a professional painter? Did you have any other artists in your family who influenced you along this path?

SN: For me, and many artists from what I have read, there wasn’t really a decision to be made. There was no member of my family showing any interest in art. Like most artists, I suppose I had a fairly independent mind. What was crucial was the encouragement of my family and those around me that I was talented and showed promise. In every year of my secondary education I was ‘1st in Art’. I spent much of my spare time drawing and painting and attended Glasgow School of Art Summer classes for 4 years between ages 12-16. I decided I would go to art school around age 11. I never really worried or deliberated over it much, however my parents did worry if I would be ‘good enough’. 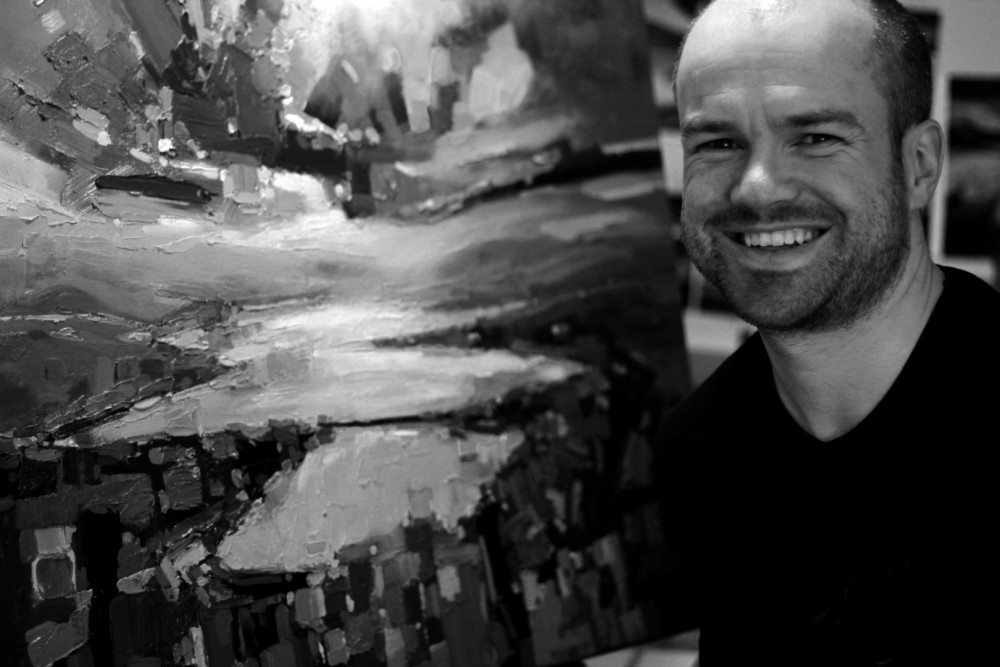 DG: How did your style develop?

SN: In the early days of art school and a few years after I felt I was searching for a different approach. I was always about painting what I saw without enough real questioning of purpose or concept. Over the years my interest in colour developed and allowed me to explore concepts within colour use. I was also teaching colour theory at West College Scotland and this made me question the way colour was taught. The colours of cyan, magenta and yellow were the primaries not red blue and yellow. This affects everything about assessing correct complementaries and colour harmonies. I summed up the theory in a video for Youtube called ‘The Truth About The Colour Wheel‘ and it has now had 125000 views. More recent developments have come through the exploration of mark making. Varied overlapping shapes and edges depict the blurred lines between the states of solid liquid and gas. The world around us is all just particles. I always think the artist’s job is to make others question the world around them. 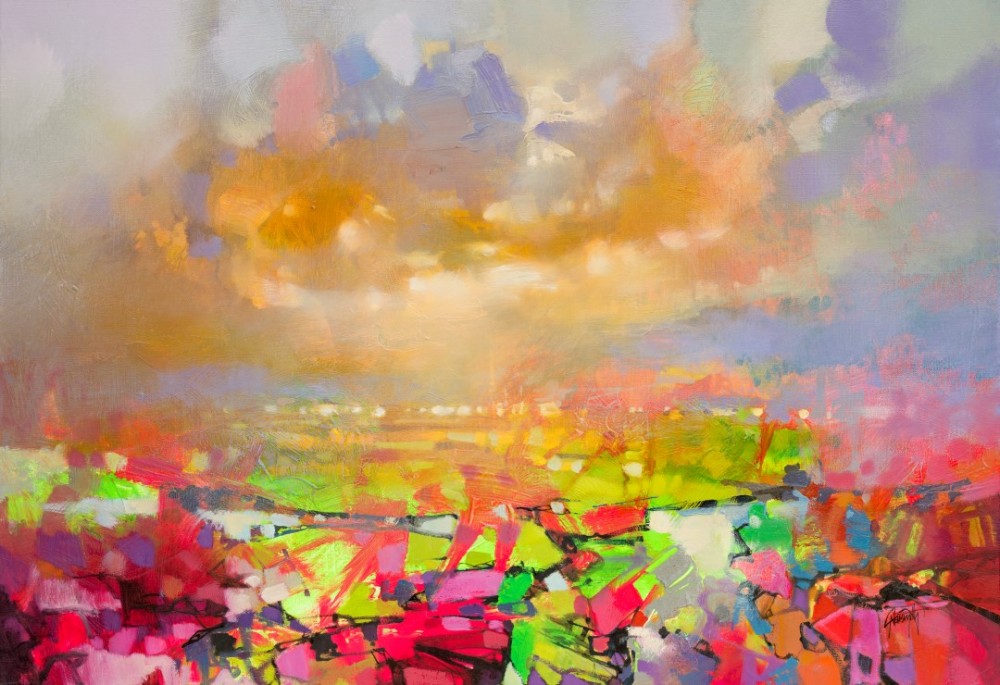 DG: Who inspires you?

SN: Henry Matisse would be and obvious one. However 2 Glasgow painters who’s exhibitions I attended in the early 90s made me think ‘this is what I want to do’. They were Peter Howson and Alexander Goudie. I’m a big fan of draughtsmanship and technique so anyone who displays a real control over their materials and breaks their boundaries inspires me. Another would be Rembrandt’s mastery of thick paint and Turner’s scumbling and glazing. 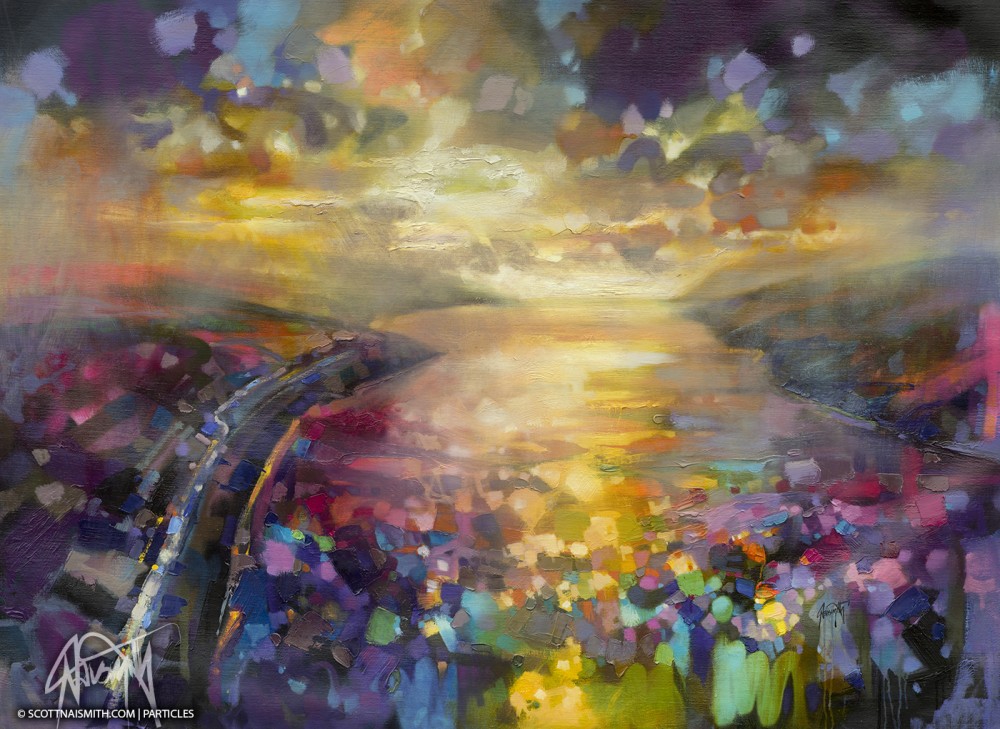 DG: Do you have any advice for prospective artists?

SN: All successful artists have one thing in common, they are passionate about what they are painting. It seems the artists in most need of advice are those not sure about what to paint or those who over think what to paint. Don’t think just do. I love that Nike motto of ‘Just do it’. Passion sells, when you paint with a genuine need to express your own voice and concepts and do it with enthusiasm, others will buy into that.

DG: How did your popular YouTube channel come about?

SN: Initially I filmed myself out of my own interest to see how things developed in time lapse. I did it with a Sony ‘slider’ camera phone. The quality was awful so I borrowed my dad’s camcorder for the second half of the painting. The second half of ‘Glen Spean Light’ was soon getting 1000 views a day and now has amassed over 166000. The purpose of the channel is primarily to give insight into my processes for collectors of my work, however I have been providing various tuition content also. I have a keen interest in film making and while I am a rank amateur with basic equipment, I like to play with various cinematic opening sequences etc. 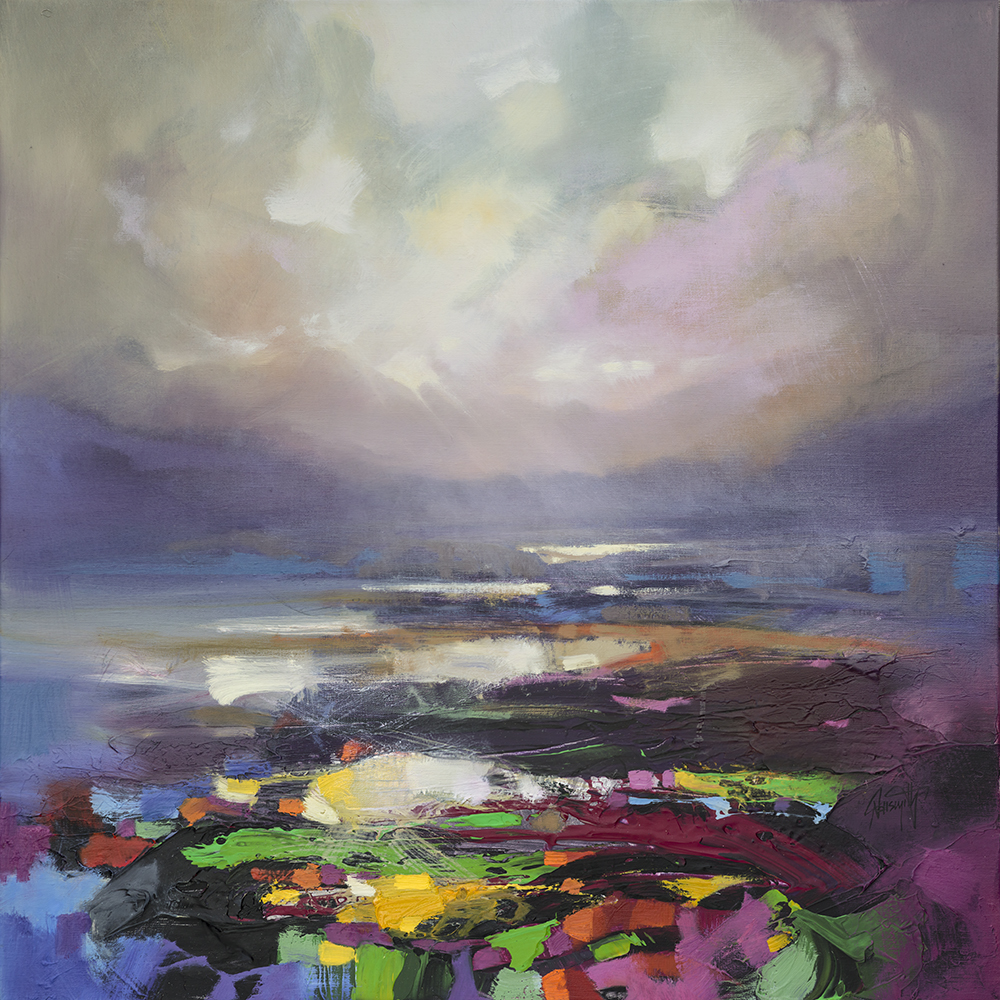 A Vibrance Emerges, Oil and Acrylic on linen,. by Scott Naismith

DG: What future projects do you have in the pipeline?

SN: There’s 3 major events happening in the next few weeks. I have taken on an offer of representation from ‘Villa Del Arte’ Gallery in Barcelona and Amsterdam. I’m currently completing a collection of work that will be sent as soon as it dries. I’m also preparing work for exhibition in Chicago which is being organised by my US publisher icanvas. Final preparations are also being put in place for a book about my work called ‘Scottish Skies’ from Jeremy Mills Publishing.

DG: What attracts you to Scottish Landscapes in particular? Have you considered travelling to different countries to paint landscapes?

SN: This ties in a little to my advice to other artists. I have a passion for the landscape here and through that immersion in the subject I have explored every part of it over the years. I’m simply less qualified to paint anything else until such times as I’m equally passionate about another location. What I’m inspired by right now is the moody light and the point heavy conditions lift. That ying and yang of balance. There’s enough for me of that in Scotland for now, but if the passion fades I’ll be on to something else. 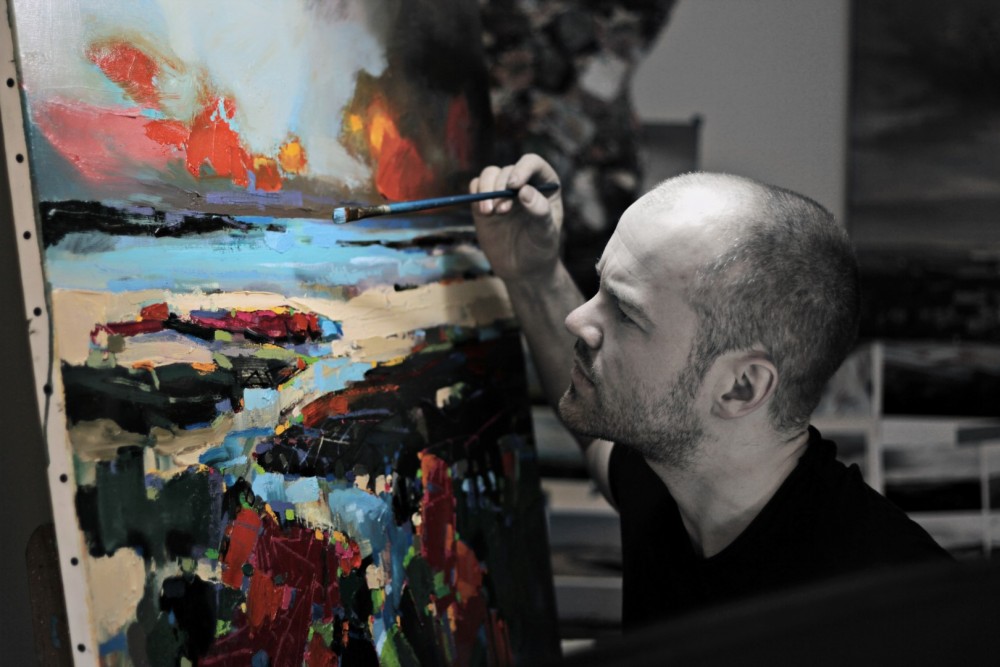 DG: Can you tell me a little bit about your process, from deciding your subject to the finished painting?

SN: Many of my works are painted with no direct reference to a specific place. I study a location (next one being Raasay in October), produce some work from very specific viewpoints and only after I’ve got to grips with the essence of that place, I begin to abstract, which I see as a process of simplification and embellishment. The more of me and my concepts go into the work, the less of the specific place remains. Mostly my paintings are built up over 3-6 layers. I jump quickly between the application of thick and thin paint. As the painting progresses it becomes a refinement of the initial bold marks of the under painting. Because I paint thin paint over thick there can be as much as 2 months between layers meaning I can have over 30 paintings on the go at the same time. 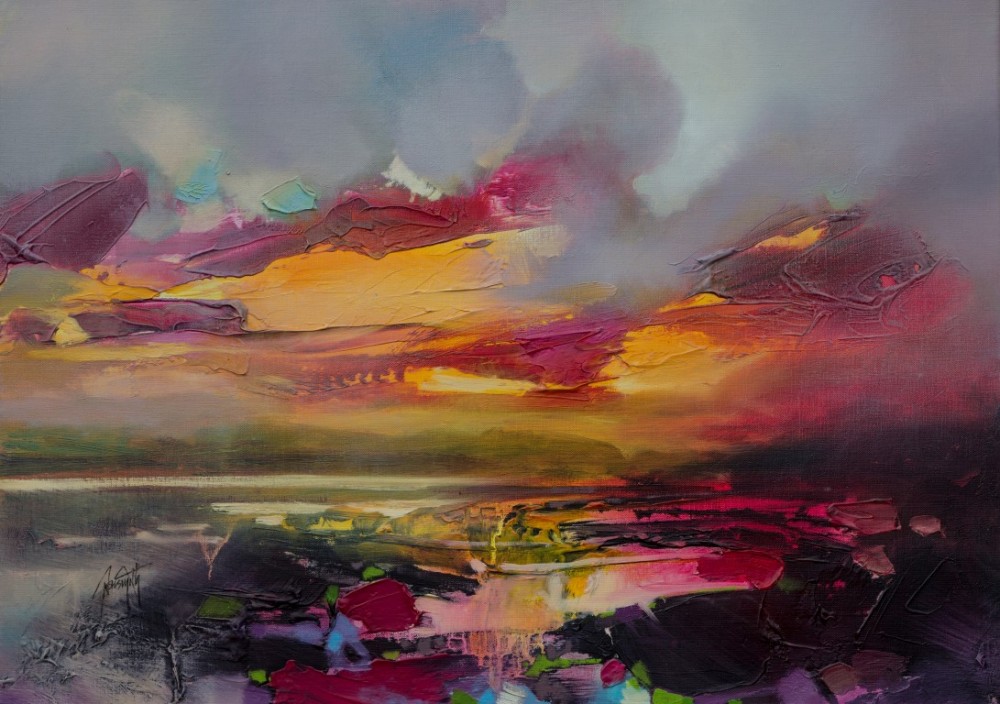 DG: How do you manage time, to both promote yourself, update your popular social media channels as well as having enough time to paint?

SN: Badly. I get too involved in whatever I’m doing at that particular time. Its a good sign I’m enjoying it though! I’ll say to myself I’ll upload another video and 5 hours later I’m deliberating over how I can make it more epic than the last. I often need to remind myself that hours infront of the easel are what counts most. When all goes quiet online is when I’ll be at my busiest. There’s nothing like a couple of galleries selling out to kick you up the backside!