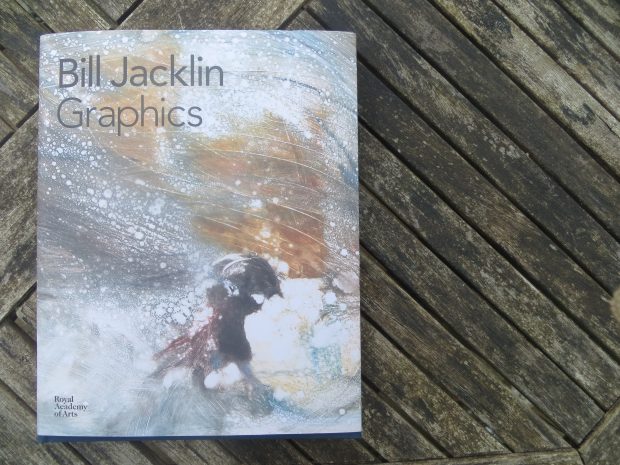 ‘Bill Jacklin: Graphics’ is a survey of The Royal Academician’s prints, from the early 1960s until the present day. This article reviews the book and identifies how it could be a huge source of inspiration for artists looking to be experimental in their work. 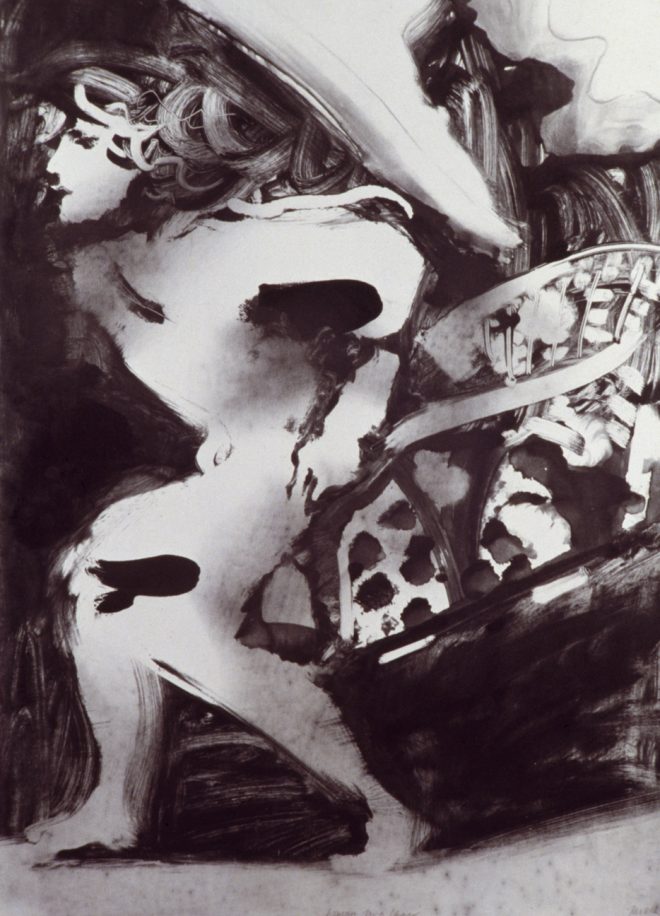 There is something about the nature of original prints which tends to grab all who appreciate the diversity of this medium; the more you learn about printmaking, the more you want to learn, and for this reason, this compendium of images from Jacklin’s printmaking career serves both collector and maker equally well. There are over 170 full colour illustrations in the 160 page publication, including lithographs, etchings, one linocut and countless monoprints, as well as a clear and concise glossary of printmaking terms relevant to Jacklin’s practice as compiled by the current President of the Royal Society of Painter-Printmakers, Mychael Barratt. The informative and inspiring introductory essays are by art expert Jill Lloyd, and editor of Printmaking Today Magazine Nancy Campbell. 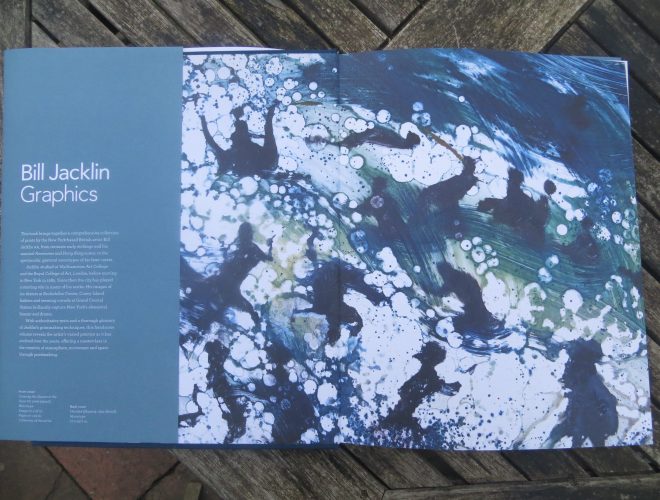 The inside cover of ‘Bill Jacklin: Graphics’

I was fascinated to see Jacklin’s prints all together in largely chronological order, as it clearly showed how his work has evolved through the decades. Jacklin’s work has always been concerned with the question of how to convey feeling in a 2-dimensional image, and how the qualities of the medium actively contribute to how emotion is communicated. The earliest and possibly most powerful work referred to is Jacklin’s series of etched portraits of his father, an alcoholic who he drew as he lay close to death in an asylum bed. The story goes that Jacklin printed a number of the portraits but then left the plate in the acid bath over a weekend by accident, and when he returned he found the plate overbitten and in pieces. He then printed from the broken plate – a broken plate of a broken man. 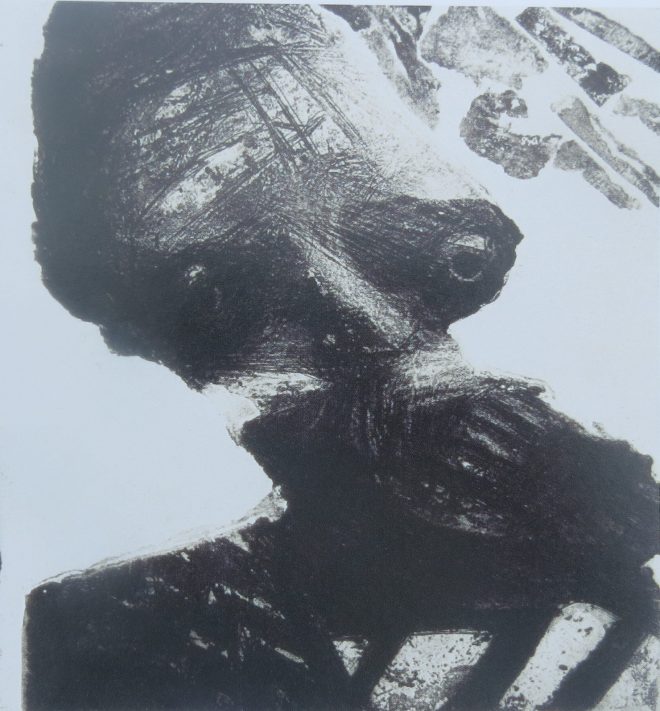 Accident or not, the concept of process echoing the subject appears to reoccur in Jacklin’s work. Just as falling rain might melt a fresh coat of pure snow, Jacklin often sprays his special ‘spritz’ – a mixture of turpentine and oil – over his monotype print plates to dissolve little dots of colour across his composition, thus creating the illusion of falling snow or rain. In order to portray the energy and movement of an incident in Grand Central station, he makes marks only possible with the quickest turn of the wrist, creating passages of light by using a rag to lift the colour from the plate in a dynamic and fresh way.  In a series of Mezzotints from 1973, Jacklin created black and white images of geometric patterns which repeat across the picture plain, often squares or diamonds in sequence that gradually fade to black at one edge of the composition. These prints have such titles as ‘Moody Rocker’, ‘Rocking My Blues Away’ and ‘Rocking Along the Line’, all making reference to the rocker used to create areas of tone in a mezzotint. Much like the grids found in other minimalist art made by Agnes Martin, there is an element of spirituality and mindfulness to these works, process for process’ sake, making for the purposes of making and for no other reason. The process is nothing and yet it is everything…and this lends a purity and contemplative quality to the work. 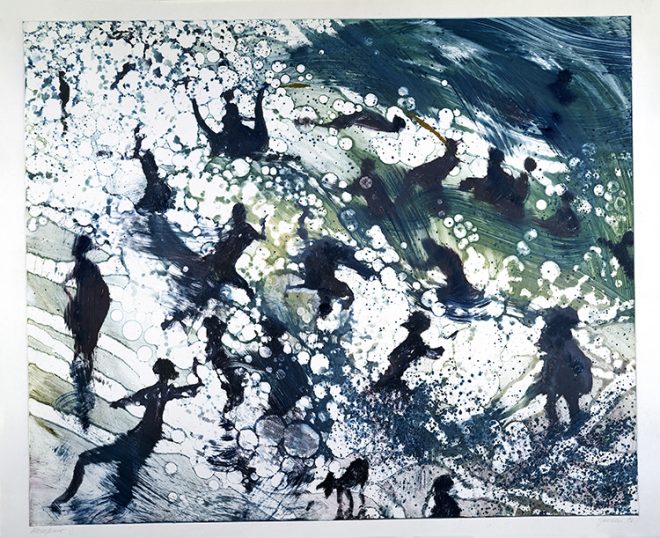 Another interesting and inspiring observation is the ease with which one can work in series very quickly with prints. In Nancy Campbell’s essay she describes how Michael Taylor of Pauper’s Press suggested to Bill Jacklin that he could work over the top of old etching plates, the marks of previous images functioning almost as a kind of underpainting for future work. The sense of history being evident underneath a new image works very well with many of Jacklin’s works, as they are so often concerned with ideas of fleeting moments and memories, for instance his romanticised scenes of bathers on Coney Island or commuters dashing in Grand Central Station. Similarly with his monotypes, it’s clear that the artist enjoys lifting marks and then putting them back in, working in a to-and-fro manner which allows him to readjust and redefine his composition repeatedly, making a series of prints that all relate although each one is unique. As the artist himself says ‘Working in series often releases me to leave well alone once I have established a space, accepting the shifting and changing play of light and the brush strokes to depict a scene…accepting no single point of view as the only one’. 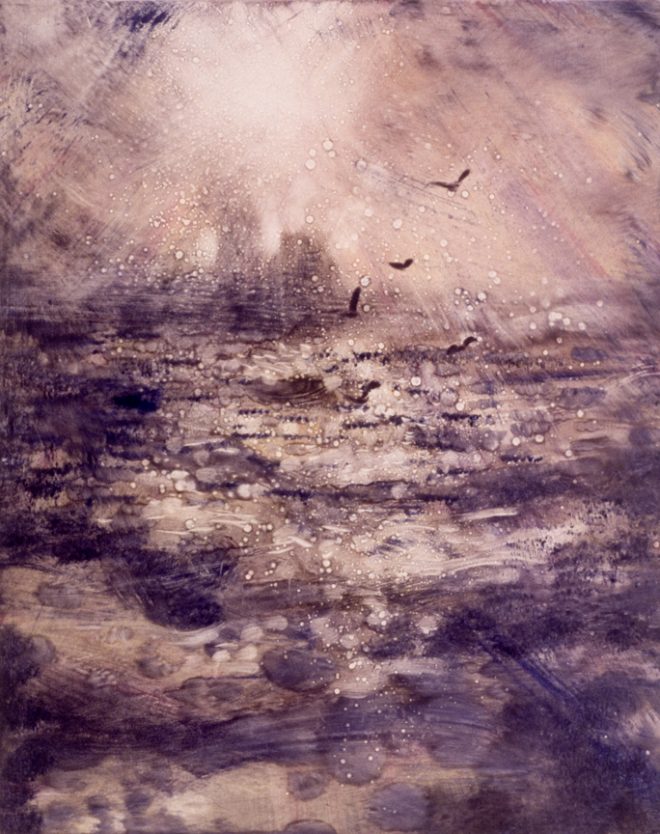 ‘Bill Jacklin: Graphics’ is a greatly inspiring book for fans of his work, printmakers and for print enthusiasts alike. The work is abundant with ideas and shifting perspectives that have left me with a lot to contemplate. My only criticism is that I was surprised to see a handful of the images were not as sharp as one might expect from an RA publication, however, there are so many reproductions which are excellent that one cannot fail to be inspired and excited by this dynamic artist’s work. 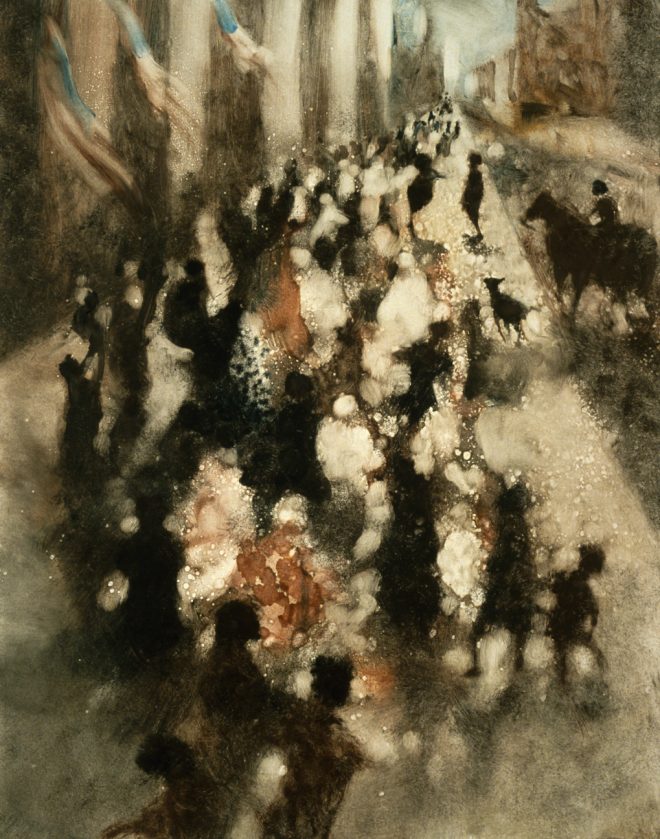 Read our earlier article about this extraordinary artist.
Monotypes by Bill Jacklin R.A.

Click on the underlined link to go to the current offer on the book Bill Jacklin: Graphics on the Jackson’s Art Supplies website.
Postage on orders shipped standard to mainland UK addresses is free for orders of £39.