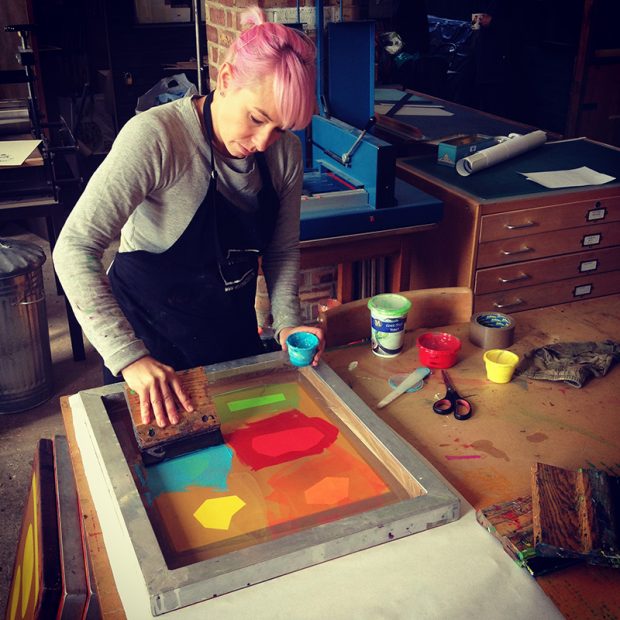 Environmental Ethics In The Printmaking Studio

Art and sustainability aren’t necessarily two things you’d think of simultaneously. Yet around the printmaking studio, the materials and processes used to create a beautiful fine art print can be highly toxic and harmful to both our health and environment. The good news? Around the world, the movement for environmentally-sound art and design is on the rise, with artists and experts leading the way towards a greener and creative future.

Sure, it’s a sensitive subject, and one we might prefer to not think about for too long. But in view of our planetary ecological crisis, sustainability issues are becoming harder and harder to ignore. In the art world, many of the hazardous and harmful compounds that were the staples of early photographers, printmakers, and painters have made a comeback. As artists, don’t we have the responsibility to produce work and be creative while making a conscious effort to minimise our impact on the environment? 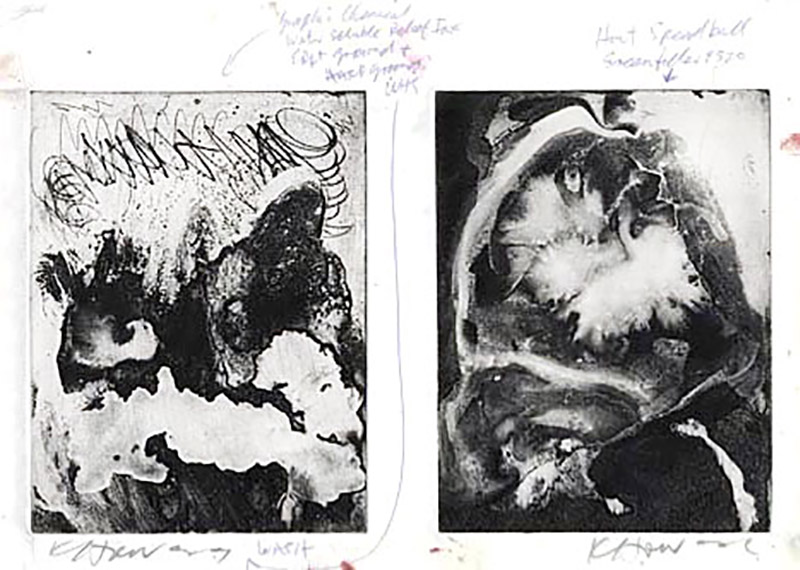 Throughout the UK and the world today, more and more artists and studios are shifting to non-toxic printmaking and developing environmentally sound printmaking processes of their own. The legacy begins with artists such as Nik Semenoff and the late Keith Howard, who was the first artist to investigate alternative methods in intaglio printmaking in the 1980s, reinventing techniques which had largely gone unchanged since the 16th and 17th centuries when the likes of Goya and Rembrandt were researching and establishing traditional etching materials and processes from the resources available to them at the time. In 1991, Keith Howard published his first book, ‘Safe Photo Etching for Photographers and Artists’ and began travelling the world to share his innovations through workshops and lectures. 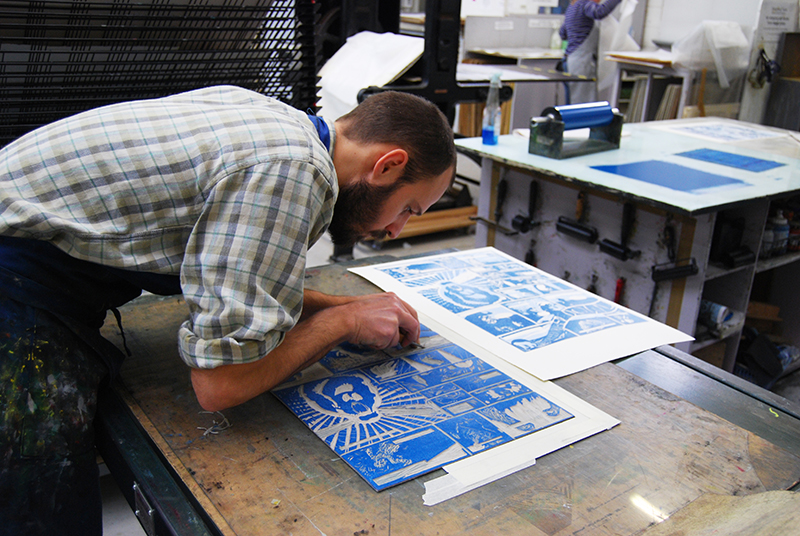 Artist Matthew Simos working on the Relief at Edinburgh Printmakers 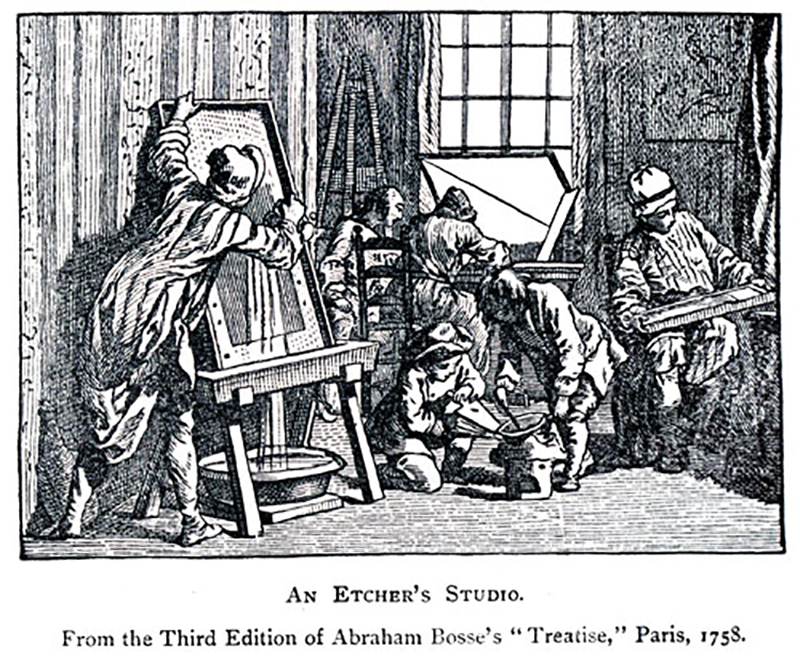 ‘An Etcher’s Studio’, from the classic ‘Treatise’ on etching and engraving by Abraham Bosse, 1645. The book is widely regarded as the most influential etcher’s manual

“The history of printmaking is a history of aesthetics, invention, and perfection – not only in technical terms but also conceptually”, wrote Friedhard Kiekeben in the foreword for Keith Howard’s book ‘The Contemporary Printmaker’. “Whereas a canvas and the actual practice of painting has changed very little in many centuries, the practice of printmaking has been accompanied by continuous development, and more recently by major re-invention. When Rembrandt wanted to etch crisper lines he invented his own mordant. When Goya wanted tonal richness in a print he perfected aquatint. Andy Warhol was innovative not only by choosing a contemporary medium, silkscreen printing, but by centering his entire art around the notion of the reproduced image. Although fusing art and invention, until recently the art of printmaking had an unhealthy association with a whole range of potentially harmful materials and processes.” 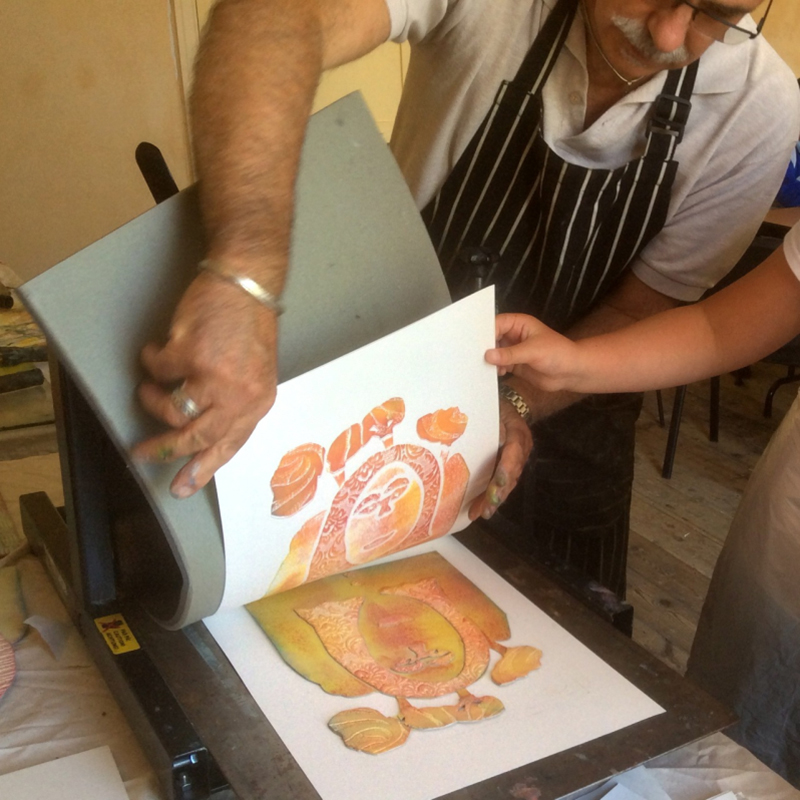 In Wales, the artist-run Swansea Print Workshop is committed to solvent free, safe and non-toxic printmaking. This is achieved by making use of either water-based techniques in place of traditional solvent-based processes or by substituting vegetable oil for white spirit when cleaning up oil-based inks. The workshop also makes use of BIG (Baldwins Ink Ground), a vegetable-based ground used as a safer alternative to traditional intaglio materials pioneered by Welsh printmaker Andrew Baldwin at Trefeglwys Printmakers.

In the Midlands, Green Door Printmaking Studio is the only open access artist studio dedicated to the art and craft of innovative and environmentally sound printmaking, while in southern England, studios such as Hello Print Studio in Margate and East London Printmakers in London offer the opportunity to work with the environmentally-sound process of Linocut and have numerous workshops and courses on this printmaking technique.

“Hello Print Studio tries to be as environmentally friendly as possible”, says Nick Morley, a printmaker also known as Linocutboy who runs workshops such as the Linocut Summer School. 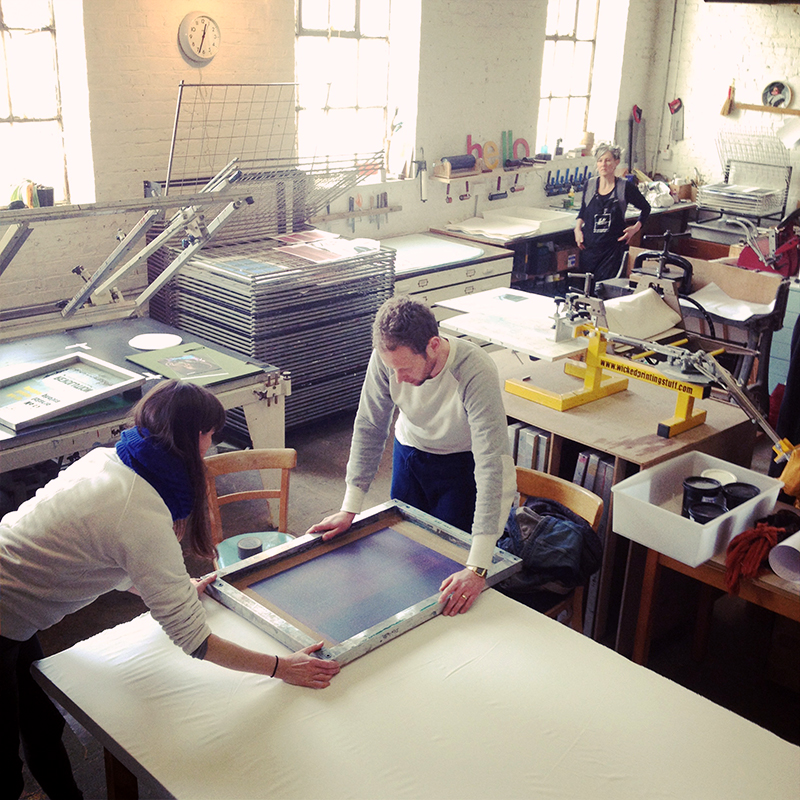 “We use only water-based System3 inks for screenprinting and water-washable Caligo Safe Wash inks for relief printing,” says Nick Morley of Hello Print Studio’s processes. “Solvents like white spirit and methylated spirit are not used, instead we clean up oil-based inks with vegetable oil. The only solvent we use is Zest-it, which is a citrus-based solvent. Most of the fixtures and fittings in the studio are made from reclaimed or second hand materials. The lights are hung from old cricket stumps, the knife rack is made from driftwood found on the beach in Margate and the inking area is made from a glass shower screen we found in the street. We recycle or re-use inks, paper and rags as much as possible.” 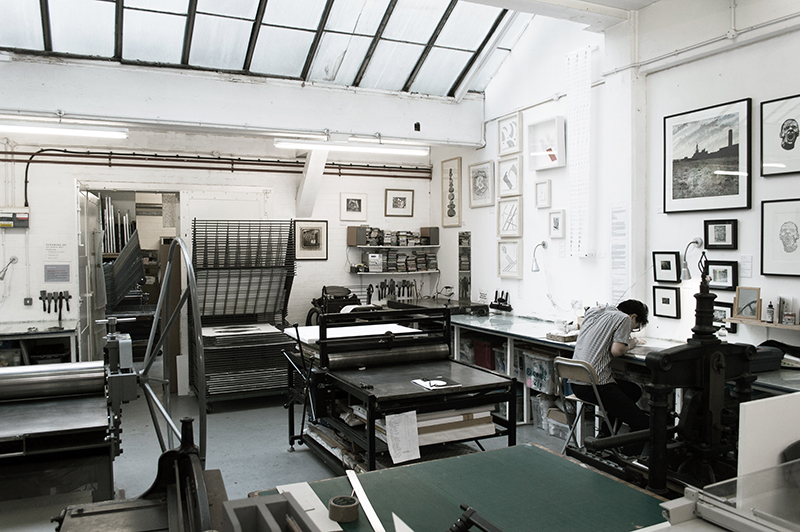 Caroline Whitehead from East London Printmakers, an artists’ co-op with about 250 members, around 350 open access users and over 40 keyholders, describes the printmaking studio as “attempting to balance traditional and contemporary printmaking practices of all kinds with respect for the environment.”

While not a pure “green printmaking studio” due to the usage of nitric acid for etching zinc plates, East London Printmakers take several measures to be more eco-friendly around the studio, explains Caroline Whitehead: “We encourage the use of cooking oil for cleaning up oil-based inks; we encourage studio users to minimise the amount of pigments etc. entering the wastewater system; we purchase bags of clothing not suitable for re-use to be cut up as rags; we recycle paper. In addition, we will always attempt to repair and re-use equipment where possible. One issue we have is the difficulty of quantifying the true environmental benefits of apparently “green practices”. For example, all screenprinting is carried out using water-based inks, which is certainly better for the printmakers’ health but does not mean that undesirable substances are not entering the wastewater system.” 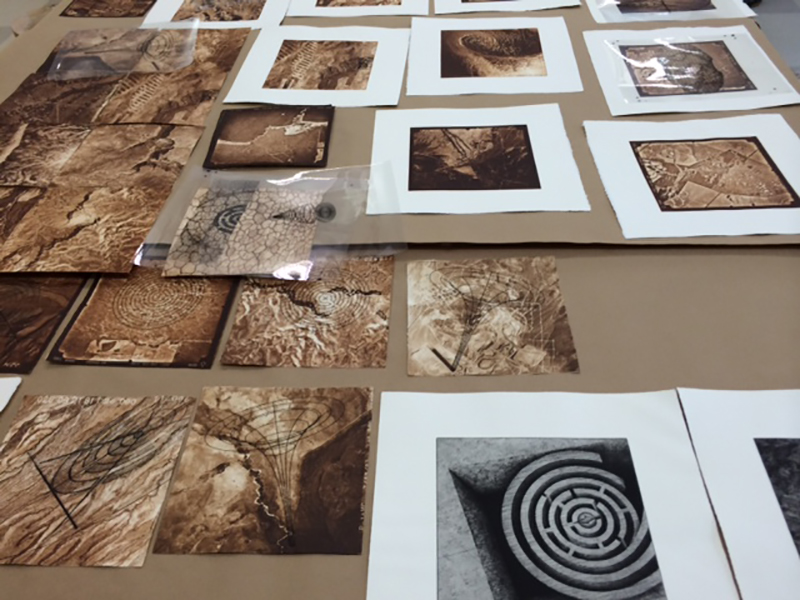 During the month of May, we here at Jackson’s will be celebrating the movement for environmentally-sound printmaking with a special series of interviews with artists and experts who are pioneering some of the key innovations in the field, including Henrik Boegh, Susan Groce, Cedric Green, Eunice Kim, Lynn Bailey, Anna Johnson and Umberto Giovannini, offering invaluable advice and insight on more sustainable ways of creating art.

To learn more about how to create a non-toxic and environmentally friendly printmaking studio you might wish to read these books:
Screenprinting – The Complete Water-based System by Robert Adam and Carol Robertson