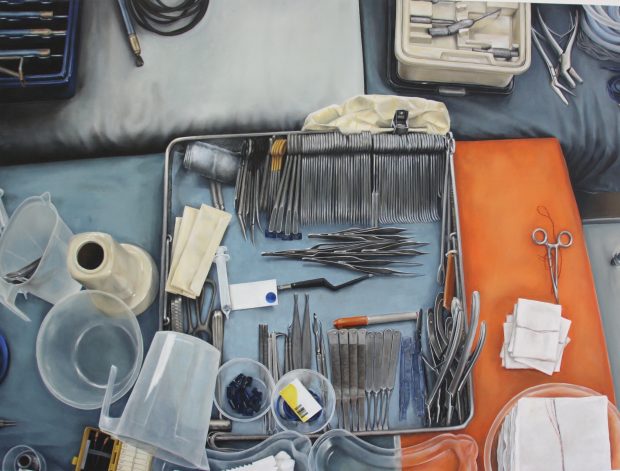 One To Watch: Inês-Hermione Mulford

The FBA Futures exhibition is held annually at Mall Galleries in London, and features work by outstanding graduates from art schools across the UK. This year, we asked visitors to FBA Futures 2017 to vote for their favourite piece. At the end of the exhibition, the votes were tallied and it was announced that the winner of the Jackson’s One to Watch Prize was Inês-Hermione Mulford, whose winning painting, ‘Surgical Still Life’ (Oil on board, 2016), is shown above. We spoke to Inês-Hermione about her work, the materials she uses, and the experience of sketching and painting surgery. 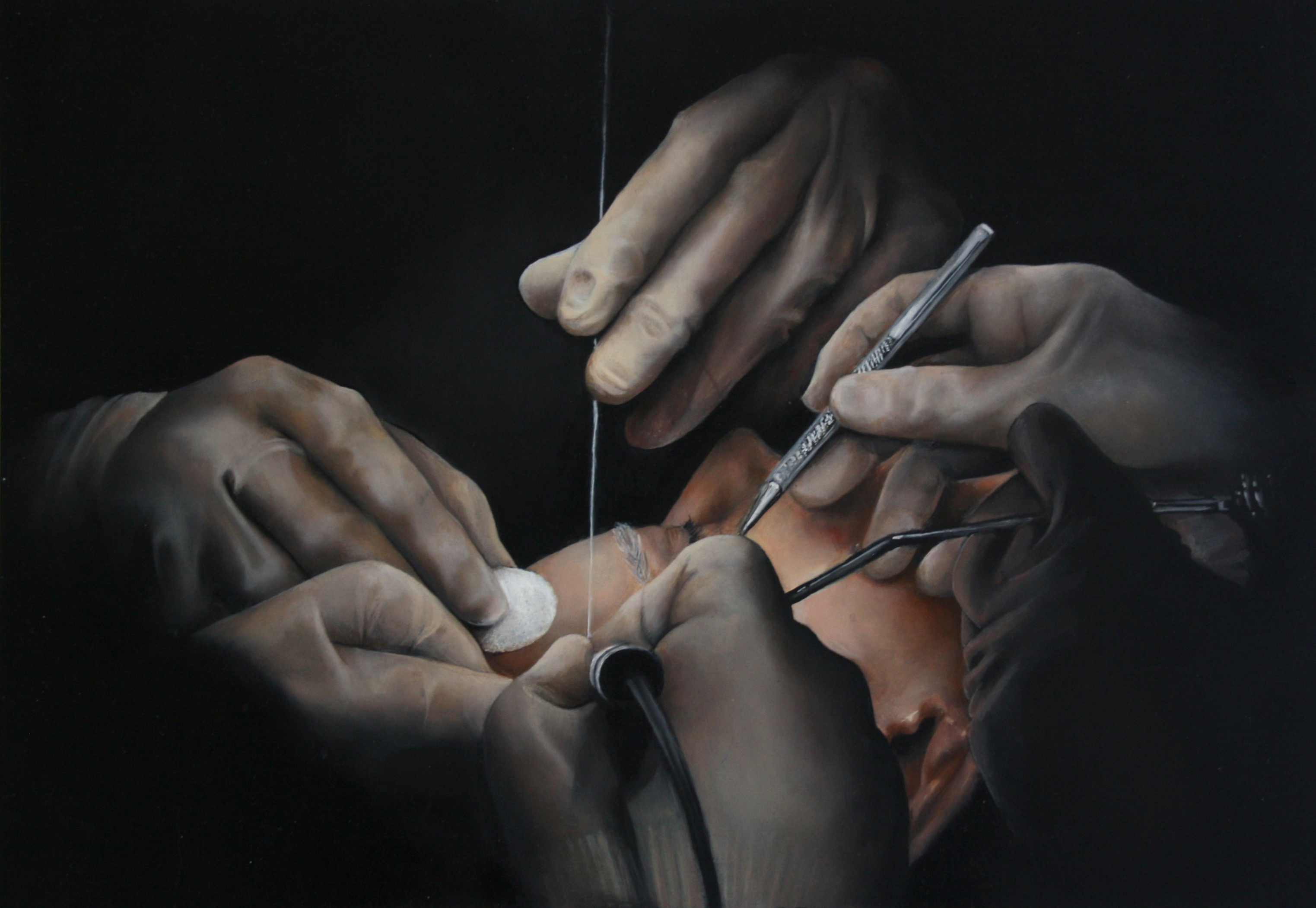 Duncan: Hi Inês – congratulations on winning the Jackson’s prize at FBA Futures! Perhaps it would be appropriate if you could you talk us through your way of working and the materials you use. Have you settled into one type of working practice?

Inês-Hermione: You might think me quite straightforward and unadventurous, but I find that oil paint on primed (and sanded) board is the most effective and satisfying medium. For me, the importance is not in hugely complex uses of installation or materials within the painting, but the process of painting itself and challenging my ability to use and manipulate paint to create something that looks real; making something two dimensional look three dimensional. I take some of my inspiration from the Old Masters and would like to think there is still a place for traditional painting in a very contemporary art world.

My colour palette is very limited; I only use 6 tubes of paint, so I tend to go through them pretty quickly! However I enjoy mixing my own colours, and feel that doing this improves my skills in observation and gives me a better understanding of the paint itself.

Observation is very important within my work. Primarily I work from photographs to get proportions and positioning correct when in the initial stages of painting. I then try to discard the photographs as early as possible and to paint from observation until it looks ‘right’. Nonetheless I often have to bring in similar objects or fabrics to those being painted into the studio, and sometimes even refer back to the photographs when I get stuck.

Although it sounds like I have settled into one way of painting, I am keen to continue experimenting within the medium as I have, I hope, many years of painting ahead of me, and what might work for me now may not in a few years’ time.

Duncan: How did you manage to shadow surgeons at the John Radcliffe Hospital, Oxford? I imagine getting into the operating theatre must have been pretty difficult…

Inês-Hermione: This is a prime example of ‘it’s not what you do, but who you know’. I am very fortunate to have a craniofacial surgeon as a close family friend, and it was through him that I was given permission to be in not just the hospital, but theatre as well, to shadow him. The hospital takes on a few students throughout the year who have an interest in surgery, and who are more commonly applying to medical degrees, or considering specialising in surgery. So for many who worked there, my presence was a bit of a surprise.

Getting into the operating theatre was part of the work experience, however the difficult part was getting permission from the families and patients to draw, and more specifically, take photographs during the surgery. As you can imagine, there were a few things I had to be careful of for ethical reasons. I was very welcomed and everyone – the nurses, doctors, surgeons, anaesthetists and all of the patients – gave their consent. 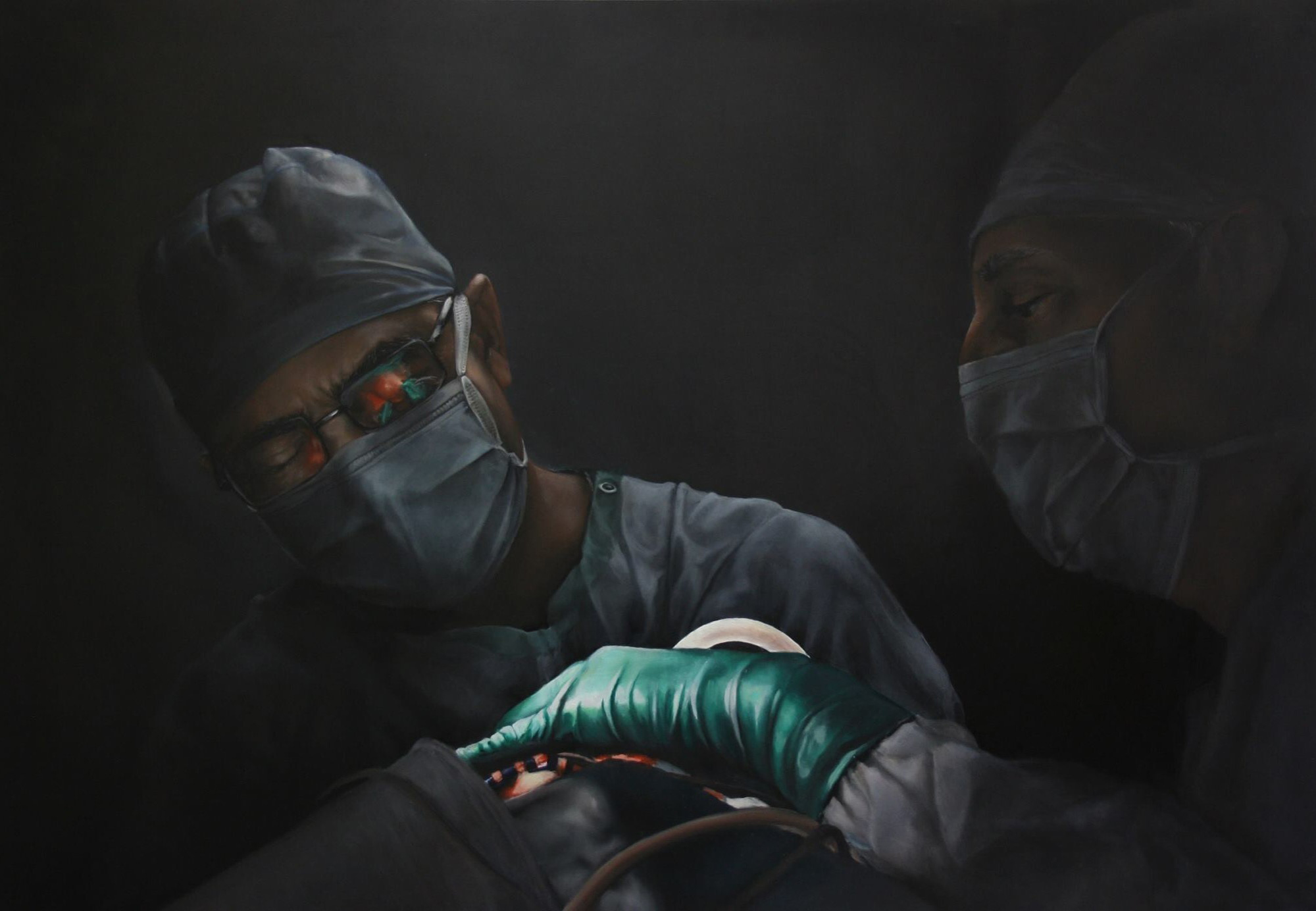 Duncan: You seem to be very theoretically engaged. How have writers like Tim Ingold (whom you quote in the FBA Futures catalogue) informed your work?

Inês-Hermione: The theoretical side of my work came from writing my dissertation. It was titled ‘The Surgeon Artist: art and craft within surgical practice’. Within this I wrote in depth on many areas I had never studied before. Tim Ingold’s book Making was an eye opener to new ways of thinking, along with the likes of John Berger and Richard Sennett. Because I took on such a challenging and specific title, I had to make sure my research was accurate in my understanding of craftsmanship and skill within art and surgery, contemporary and historically… which proved to be a huge task. In presenting my primary research from the hospital, I ultimately had to learn a new way of writing in order to convey medical processes and concepts correctly.

Theology informs my work in the sense that it has shaped how I approach, see and think when it comes to viewing and talking about art and craftsmanship. It has also made me think far more about my own work, how I want it to be perceived and how every detail and process is important, even if those processes are not seen by all.