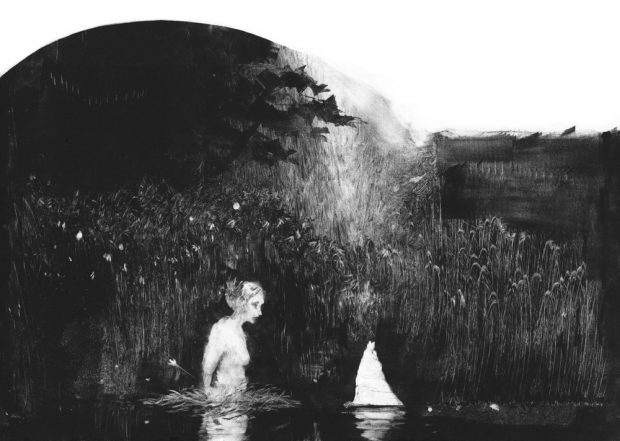 David Begley is an Irish printmaker whose recent works are monotypes: single prints taken from a plate which has been selectively inked, or inked all over and then selectively lifted (which is David’s preference). Having previously admired the striking selection of paintings featured on his website, we couldn’t wait to hear about David’s recent foray into printmaking.

Duncan Montgomery: Hi David, thanks for talking to us. What was it that got you interested in printmaking, and monotypes in particular? Had it always been on your list of media to try out, or were you prompted by the experience of subtractive drawing in your animations?

David Begley: I stopped painting in 2013 in order to focus on drawing. This led to me making a series of charcoal animations. I started printmaking last year, which was a natural step in monochrome from my charcoal animations, and yes, the subtractive element is similar.

I’m new to the medium so it’s very exciting. I blacken the plate and start wiping away, until I find an interesting image, then keep working on this until I feel it’s ready to print. I use perspex plates and at night a light-box so that as I wipe out, the image comes through from light. Making the images is what excites me most, and the anticipation of pulling the print – the wonder of how it will turn out. I’ve no interest in making editions at the moment. I love the immediacy of monotypes. Eventually I’d like to animate through the process. 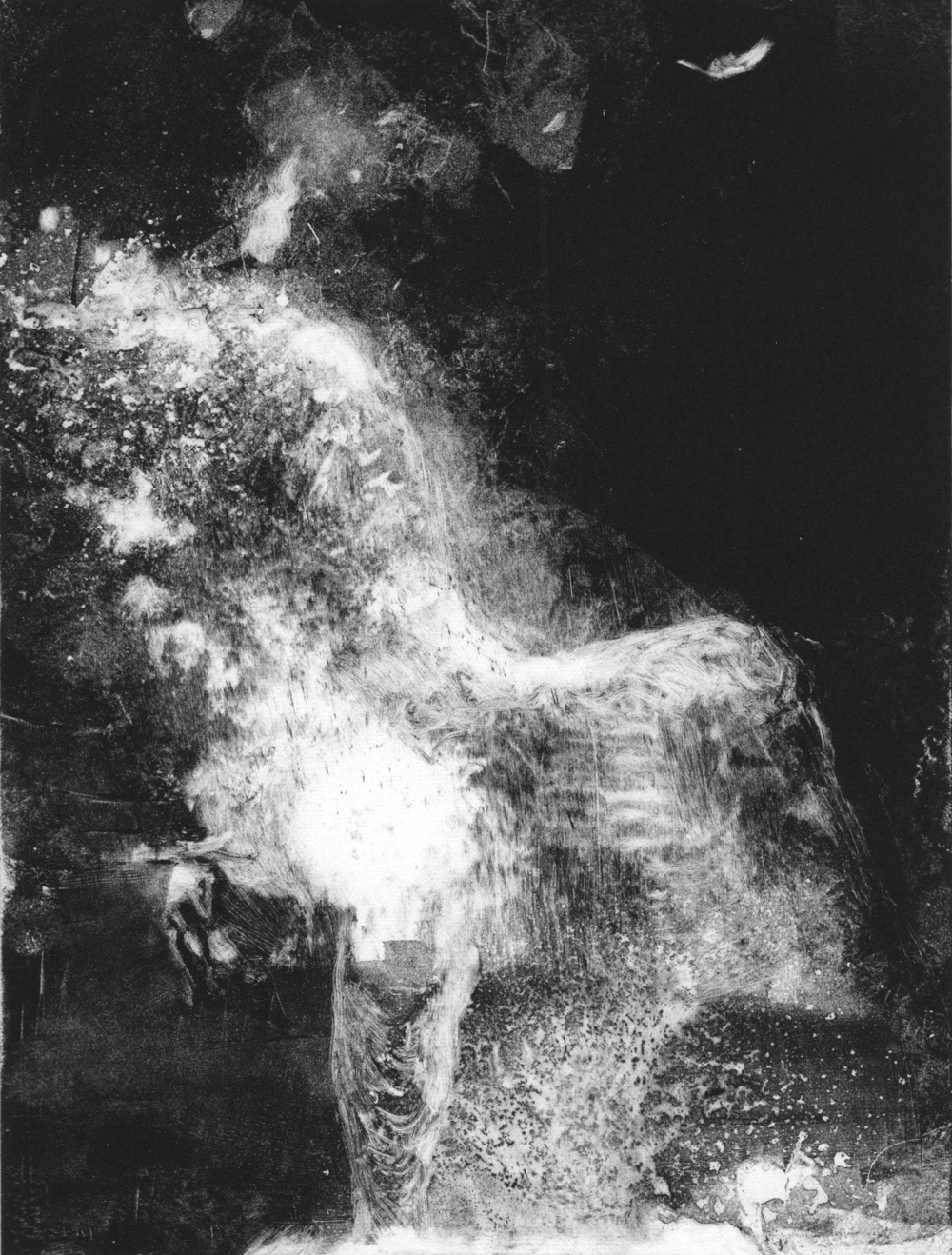 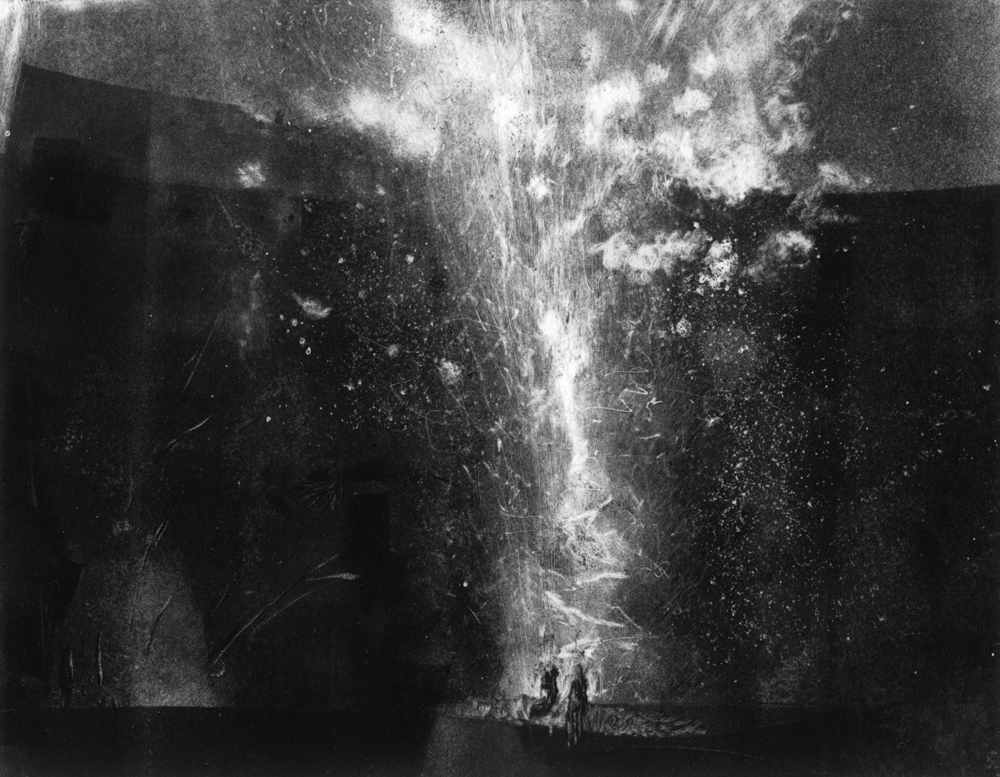 I was particularly struck by the use of a sfumato effect in your earlier oil painting, which seemed to prefigure the haziness of your subtractive drawings and monotypes. Did you feel like you had really found your medium when you began to make monotypes?

When I painted in oils, I spent time preparing grounds, using up to 15 coats of sanded gesso. It gave me such a beautiful surface to work on, the ground’s light came through the underpainting and consequent thin glaze layers. The works always began with a wipe-out – just like my monotypes.

Each medium has its time. I feel I have a new freedom in monotype. By its nature it must be completed in a day or night. By contrast, my paintings and animations took months to realise. So yes I do feel like I’ve found my medium, the ink can give some wonderful delicate tones and also dense sonorous blacks. I find monotype exciting now, especially after spending the last few years solely working in monochrome drawing / animation. 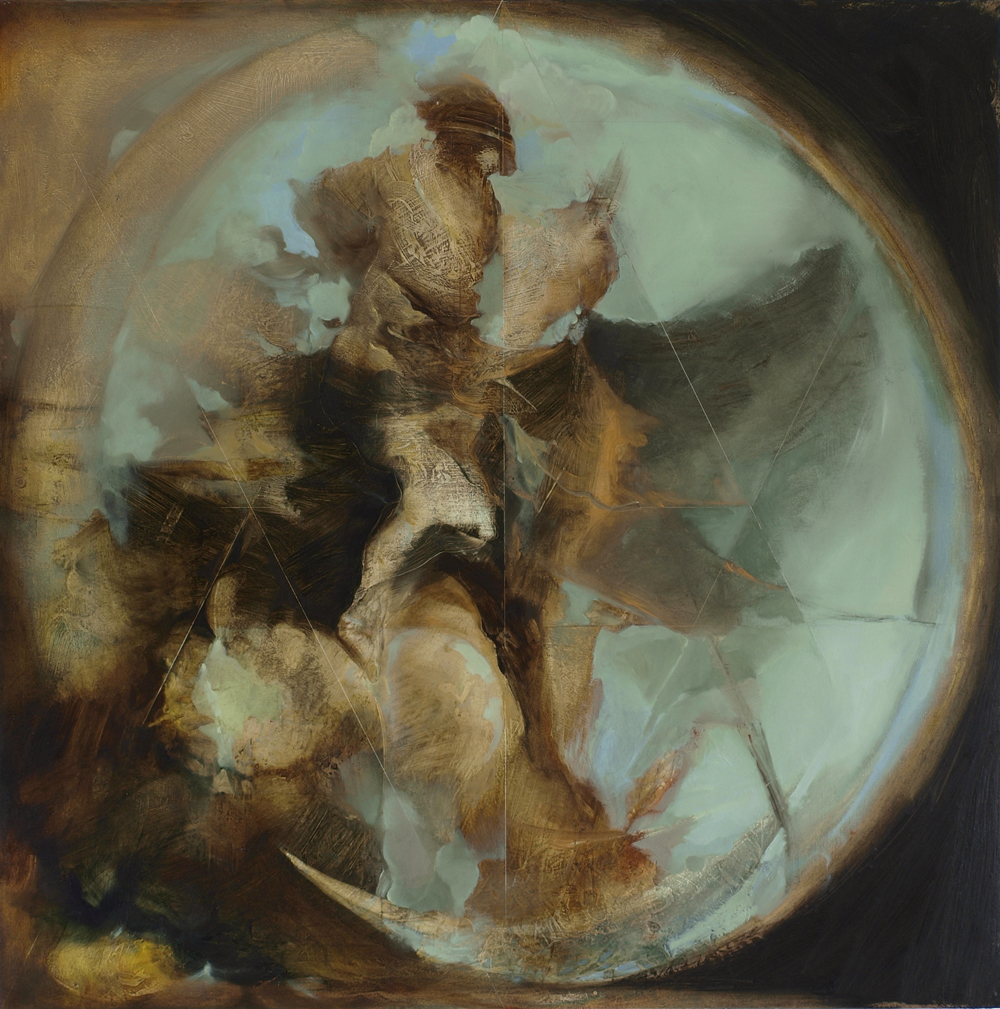 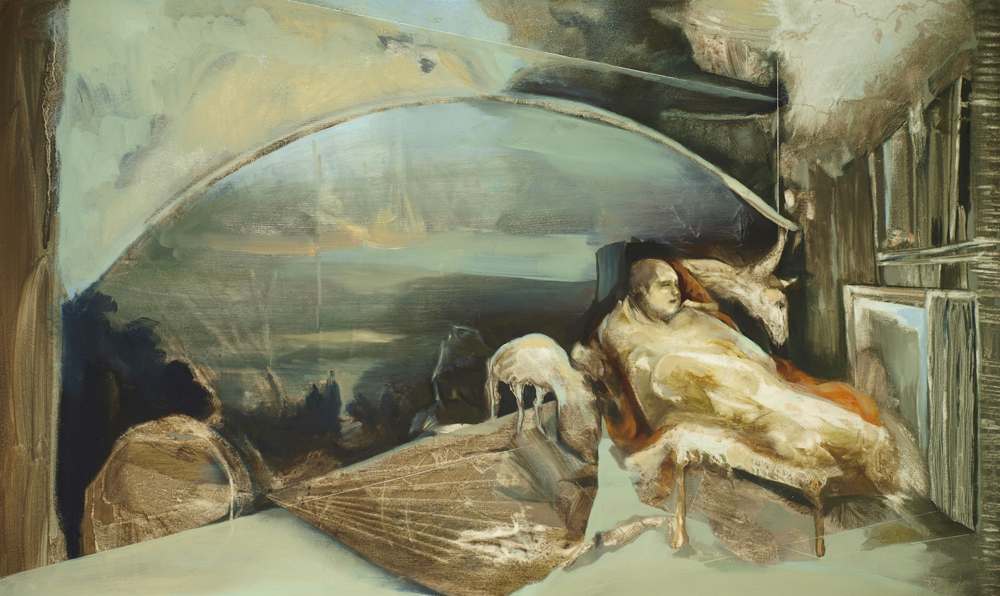 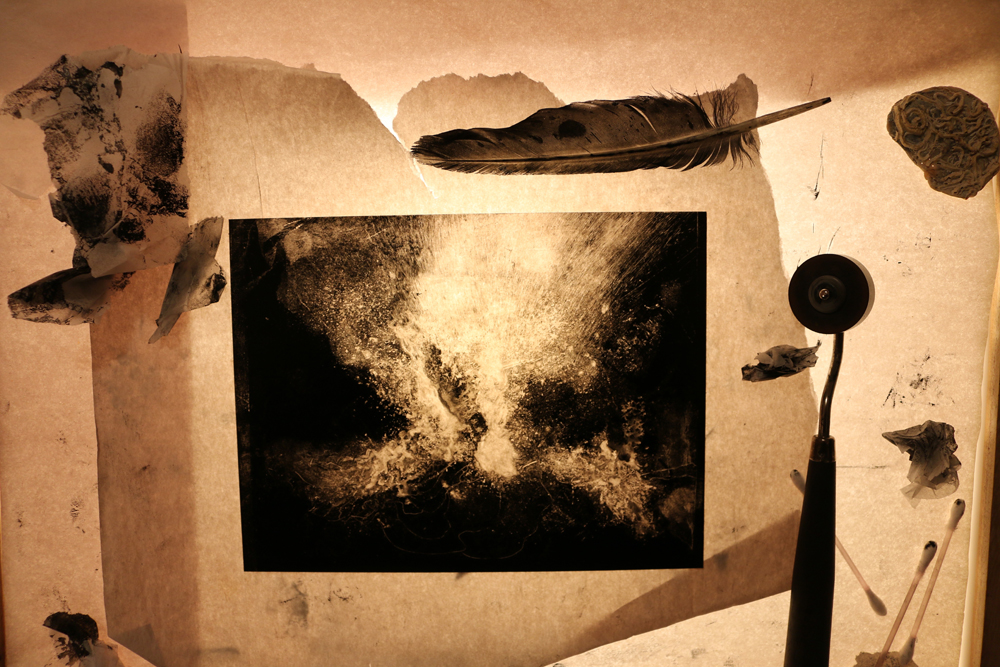 One of David’s plates on the lightbox, surrounded by tools used to lift ink.

I have a couple of practical questions about these monotypes: what ink are you using and what tools are you using to lift it? I fancy I can detect several different tools in there: there’s a mixture of crisp white lines, murky greys and, unless I’m mistaken, marks made by brushes, fabrics and fingers…

I use Caligo Safewash Ink made by Cranfield. It’s gorgeous ink, gives beautiful rich blacks and having used oil-based ink before, I prefer it. It’s non-toxic, without fumes and easy to clean up. I use a scribe, scrim, etching needles, feathers and fingers, rags, tissues, a water spray, waterwipes and cotton buds to wipe out. I enjoy finding new marks by experimenting with found tools – living beside a beach allows me forage daily. The edge of a small shell has made a wonderful tool for scratching out areas of light lines. I recently laid marram grass roots onto a plate, they printed beautifully.

For greys, I tonk. A technique from oil painting – lay down absorbent paper on the painting surface to draw out oil (speeds drying and generates intriguing surfaces). In ink, repeated tonking can create subtle and varied tones of grey. 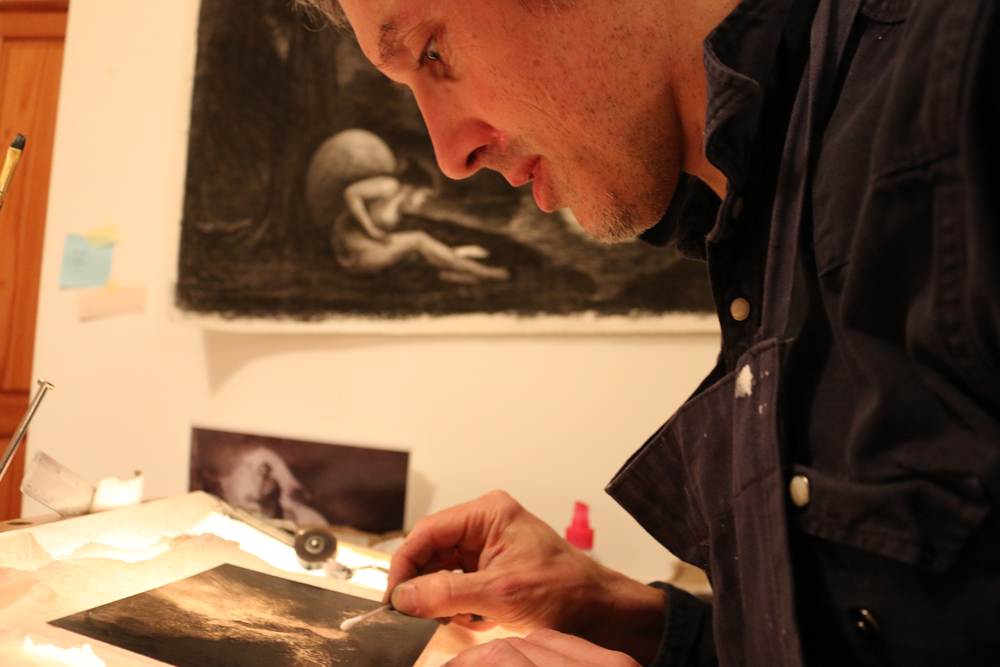 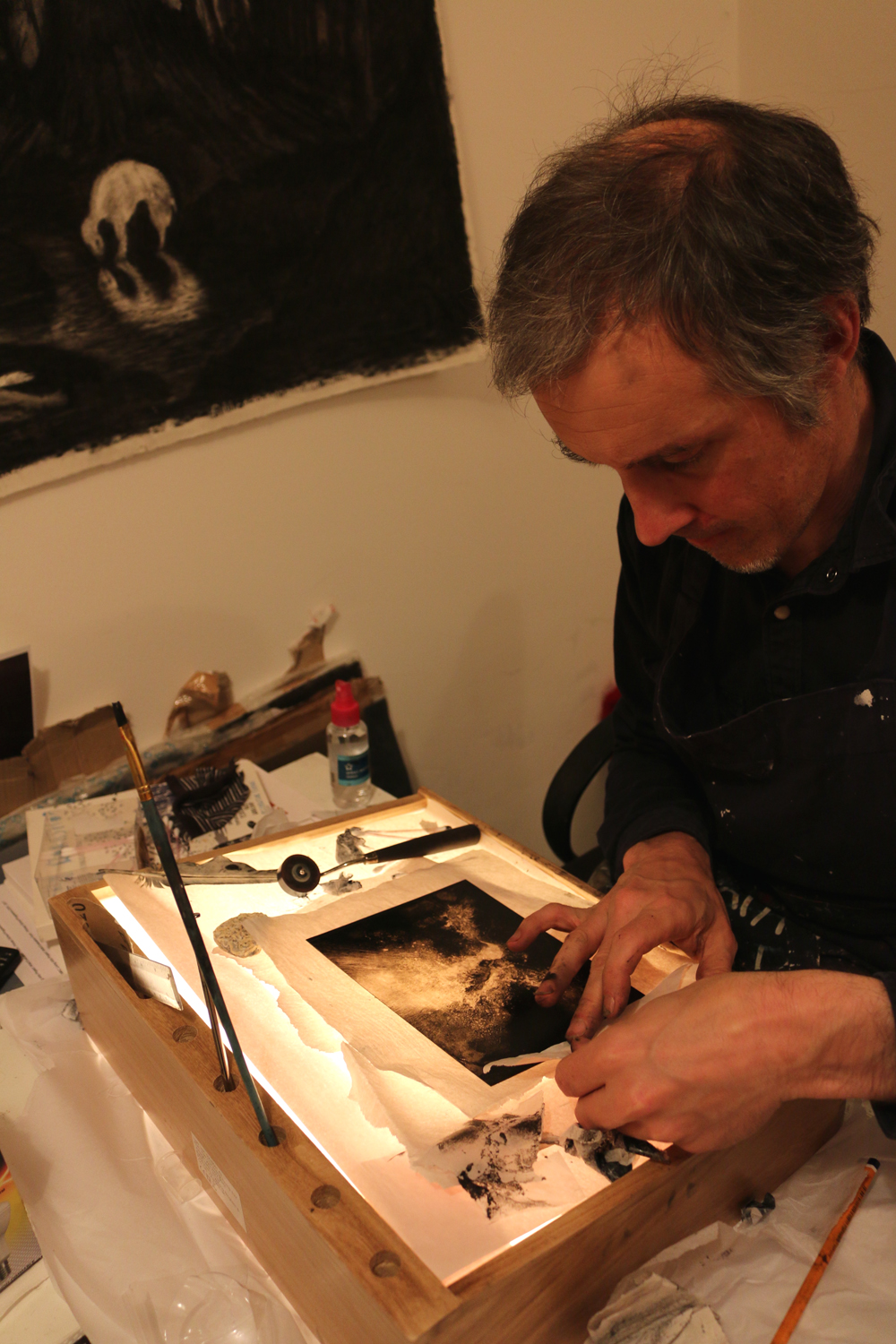 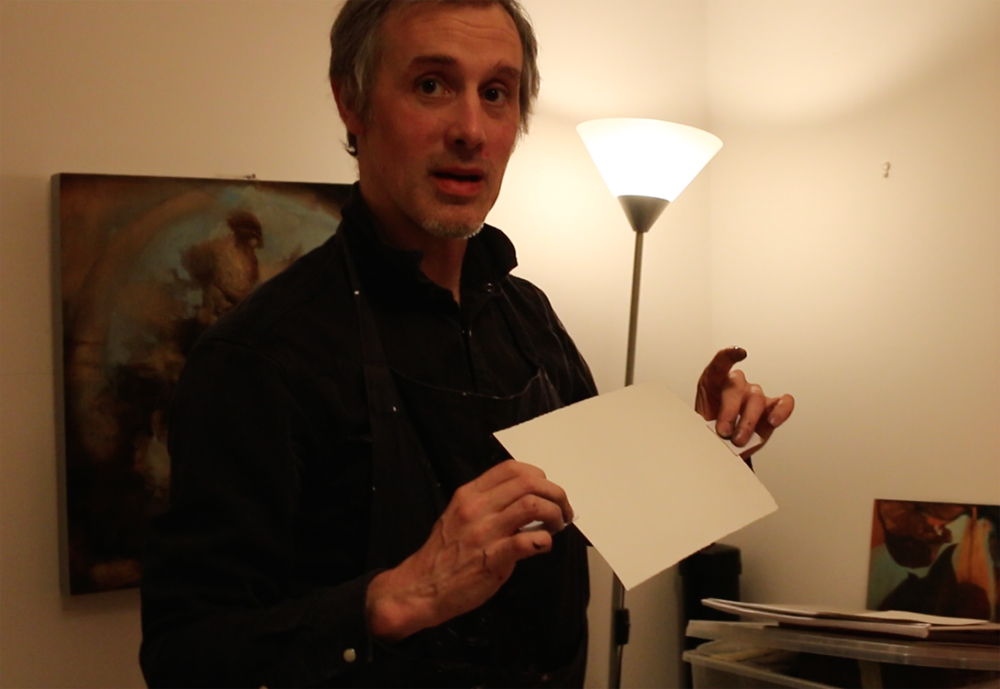 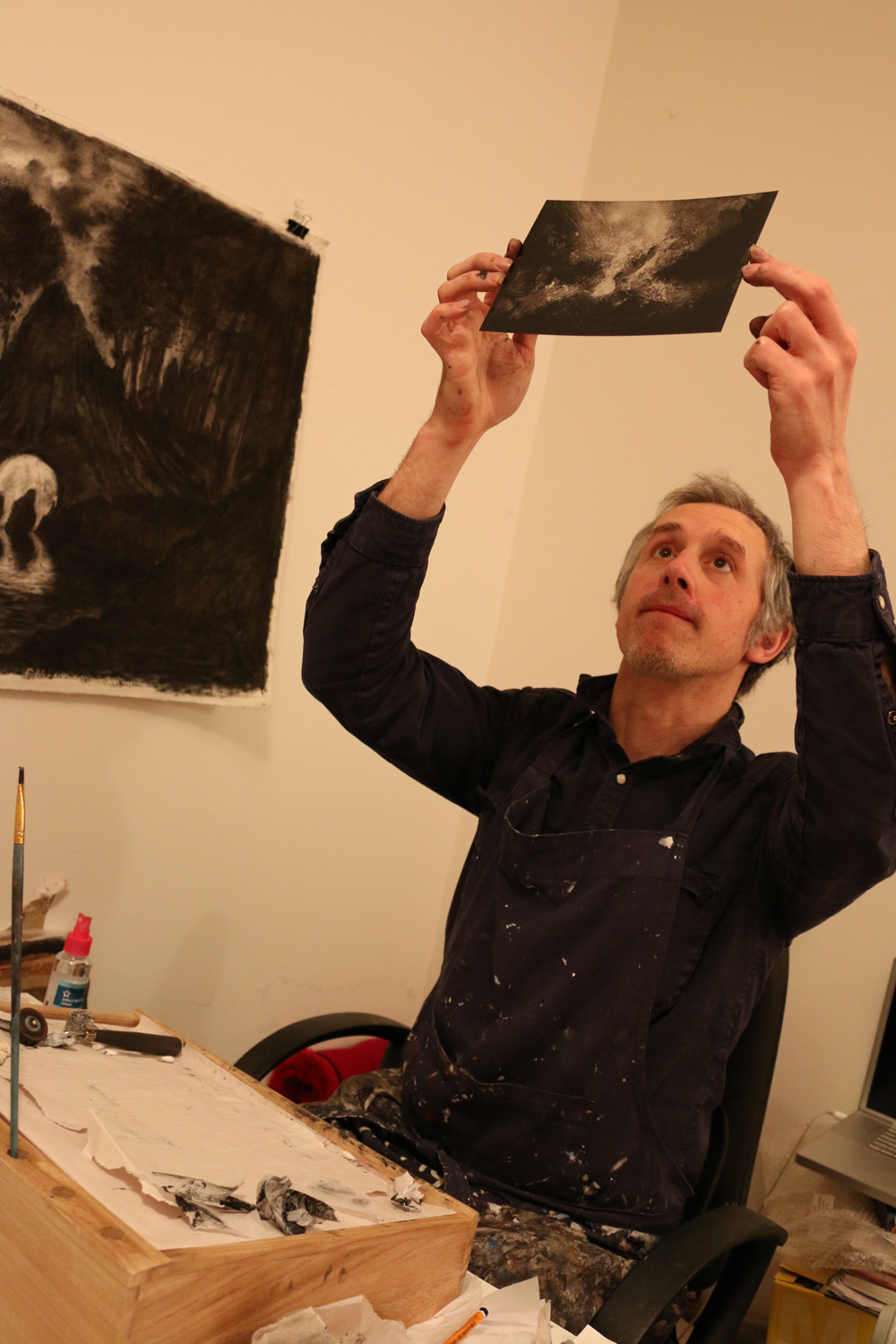 Your website states that the monotypes from your recent series ’From the cast of Bone Black’ are inspired by a fiction piece you are writing. I was wondering whether you would be able to tell us more about the novel, and the relationship between the novel and the prints. Are they illustrations? Does the inspiration from the monotypes feed back into your writing?

I’m writing my first novel ‘Bone Black’. It’s a satirical fable intended for an adult audience and addresses the businesses of art, medicine and death. It is a work of speculative fiction with elements of black comedy, invented mythology and Grand Guignol which delves into the fields of art, homeopathy, bird-sniffing and the numinous. A central theme of the book is the creative process – how unexpected prompts create images, words and melodies.

As an artist I am continually open to chance, how a word or mark leads to the next, and one by one, ideas are pursued in whatever medium is appropriate. I do not plan the images in advance. Images prompt texts and vice versa. This interaction of image and text is crucial to my process in writing. In order to visualise a scene, I may draw it first. Several of this novel’s characters’ appearances are based on portrait / life models I’ve worked with. 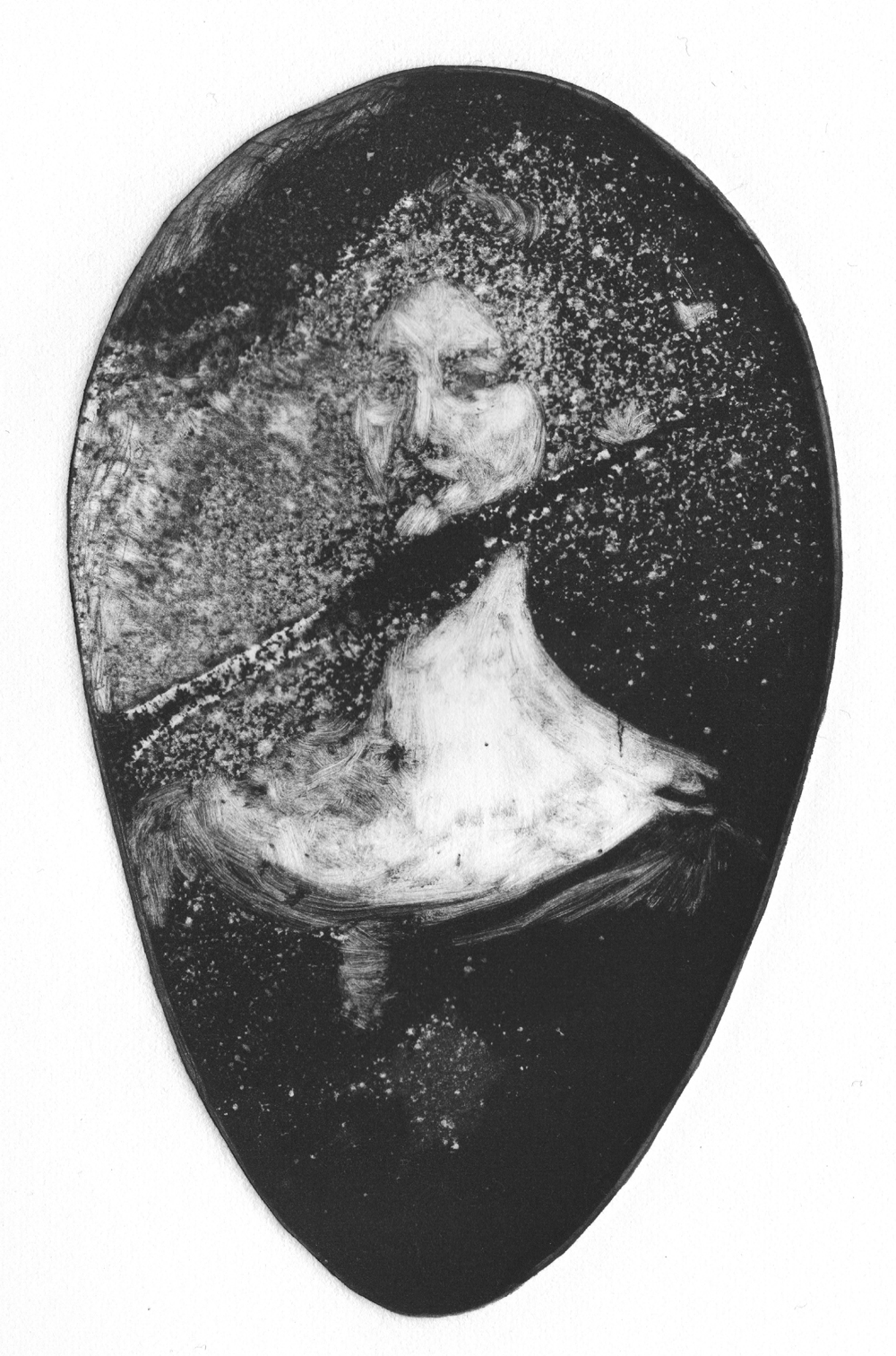 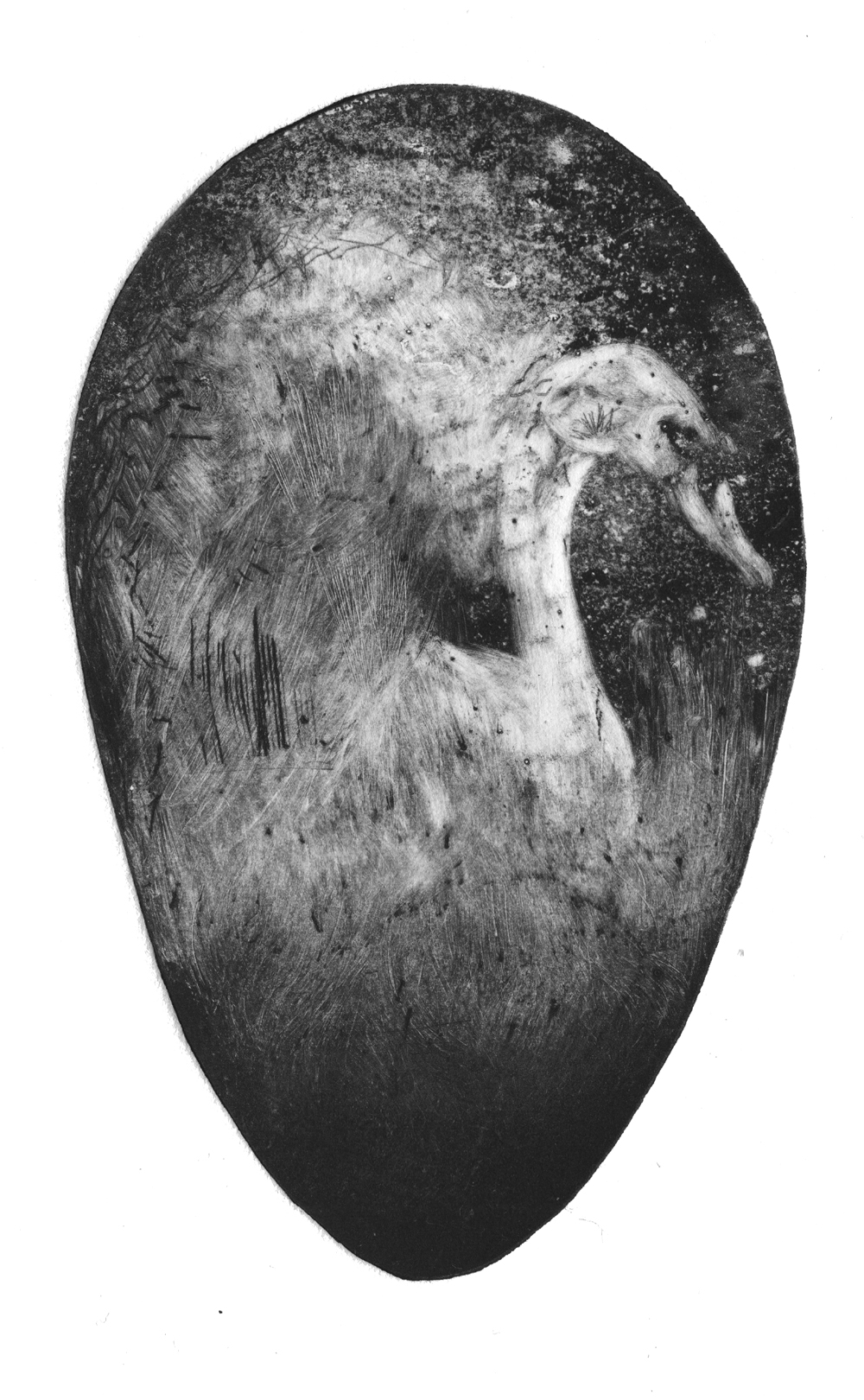 In order to ‘see’ the characters of ‘Bone Black’, I recently made the series ‘From the cast of Bone Black’. One ‘character’ in the book is a large egg, so I began by making a plate in the shape of an egg. Many of the images were surprising. Natural elements became part of the cast. Images led to further images, and the series has come into its own. The prints are not intended as illustrations, although they could be used as such for the published book. The story is a starting point for the prints, and in turn they feed the story.

‘The swan sniffer’ is a monotype currently exhibited at The Royal Hibernian Academy, Dublin until August 12th. After making this monotype this year, it prompted an unexpected and now pivotal chapter in my book. 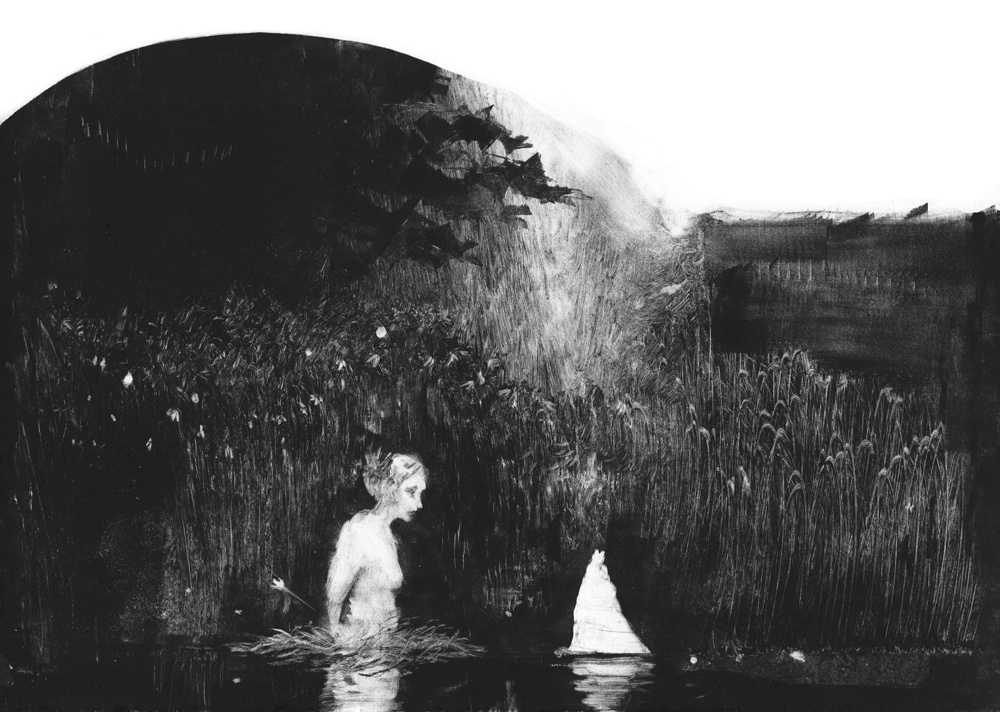 Would you be able to talk about your influences? I see El Greco in there, and some of the mark-making in the monotypes reminds me of the work of the stained glass artist Patrick Reyntiens… Do correct me if I’m wrong!

I wasn’t aware of Patrick Reyntiens before seeing your link, thank you for sharing that with me. I first saw a painting by El Greco in the National Gallery of Ireland when I was 17, and I was quite overwhelmed. I still love the colour, space and light in his work. The shimmering drama of it. The hope. And his ability to move the viewer. In general I am most stimulated by a work of art if I am moved by it. I spent a week in 2006 in The Prado, and ever since Ribera is also an influence. Titian’s colour and Tintoretto’s compositions continue to excite me.

So what comes next?

I’ve been awarded a Travel and Training Award from The Arts Council of Ireland in support of a residency at Stiwdio Maelor, North Wales later this summer. So I’ll be writing there and on my return am looking forward to making a new clutch of eggs!

Caligo Safe Wash in for relief and intaglio printing can be bought at Jackson’s. Interested readers can find out more about David Begley’s work on his website.