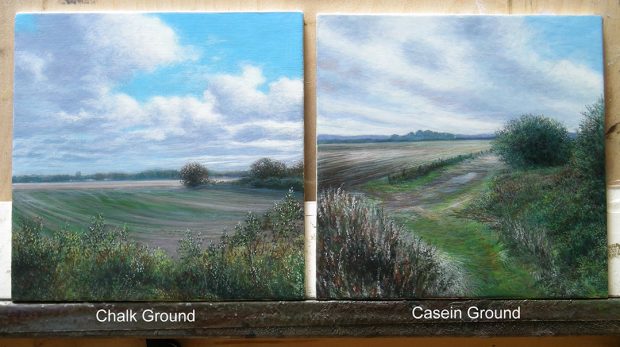 Sinopia Chalk Ground Casein Gesso for Silverpoint is a versatile ground which can be used to prepare paper or panels for a range of painting and drawing techniques. While testing this ground, we wondered whether the high chalk content and the mixture of Zinc and Titanium White pigments (which gives this ground a slightly rougher surface than the regular Sinopia Casein Gesso) might also make it ground more absorbent – a key characteristic of grounds for egg tempera painting. We therefore asked Leslie Watts, a leading contemporary painter in tempera and a runner-up in the Jackson’s Open Painting Prize 2017, to test the regular Sinopia Casein Gesso and the Chalk Ground Casein Gesso against each other and against the conventional grounds she has used throughout her career.

One of the greatest frustrations facing the egg tempera painter is lifting: new layers, if applied too wetly, can dissolve early layers, leaving a bald spot on the ground. Ideally, the paint should be applied in careful hatching strokes and built up gradually over many hours. Being an impatient painter, I like to start with a wide, flat brush, blocking in a few rough layers before I begin fine details. These broad strokes should be absorbed by the ground, creating a solid bond between paint and support, a bond that will only become stronger over time. Learning to avoid lifting in the first stages of an egg tempera painting requires time and patience – and an excellent ground.

Over the years, I have experimented with several different grounds on a variety of supports. Always trustworthy is traditional gesso, made by cooking rabbit skin glue with chalk and (usually, but not always, white) pigment. It makes for a sleek, absorbent surface, but it takes time to prepare, and it requires a great deal of sanding, which means a lot of dust. The process is messy, from start to finish.

Easier and cleaner, although the worst for egg tempera – the one that the experts will warn you against – is acrylic gesso. It’s non-absorbent, so it supposedly can’t create a reliable bond with tempera. I have used it, but only when I wanted to prepare a panel in a hurry. Although it’s not ideal, mainly because of this absorption issue, I haven’t had any issues over time with delaminating paint. Still, it ought to be your last resort. It’s extremely vulnerable to scratching and lifting in the early stages.

I’ve also made my own gesso with water-moistened talcum powder and the same matte polymer medium used for glazing in acrylic painting. When sanded, this is surprisingly absorbent, even though the binder is a plastic. It’s soft, too, so it doesn’t take long to sand it smooth. But still, there’s that dust. And talc is one of those minerals that’s better not inhaled. Convenient, but possibly dangerous.

In recent years, I’ve relied almost exclusively on Ampersand Claybords. They’re flawlessly smooth, and they require no preparation, unless you want to cut them into non-standard sizes. They’re absorbent, rigid, and convenient. And they work. However, when painting the early layers, before any real curing has taken place, I have found that the paint is easily scratched from these panels. And the problem with lifting can still occur if you work with an overloaded brush.

When I tested Sinopia’s Casein and Chalk grounds, I was comparing them with these previous experiences in terms of convenience, preparation time, ease of sanding, absorbency, vulnerability to scratching, and the dreaded lifting.

You’ll find the instructions for applying these grounds on the Sinopia website. The label on the lid of the chalk ground advises: “Shake or stir well before use.” I shook it for about a minute. Apparently this wasn’t enough. On first opening, I thought that the Chalk Ground was much thinner and more transparent than the Sinopia Casein Gesso, but I realised after applying the initial layer that this ground really did need to be stirred, and well. There was a lot of settling at the bottom that shaking couldn’t resolve. After stirring, both did have a similar consistency after all.

At this point I should mention aesthetics. First, both grounds look gorgeous in the jar. They are richly creamy in both body and colour, not dead white, the Chalk Ground being the warmer of the two. Then there’s the nose: they smell great, somewhat reminiscent of the skim milk powder that my mother used to buy when I was a kid. It’s always a pleasure to work with materials that don’t give off the whiff of potential harm. These are extremely appealing products in the container. I used a soft but springy 1″ flat synthetic watercolour brush, slightly dampened with water, to apply both grounds to unprimed masonite, using four coats on each panel and waiting at least a day between coats. The day after the final coat, I attempted to sand the casein panel with extra-fine sandpaper, but instead of creating dust, the sandpaper seemed to smear the surface. What came off on the sandpaper felt almost oily. I decided to stop sanding and leave both panels alone for a week. 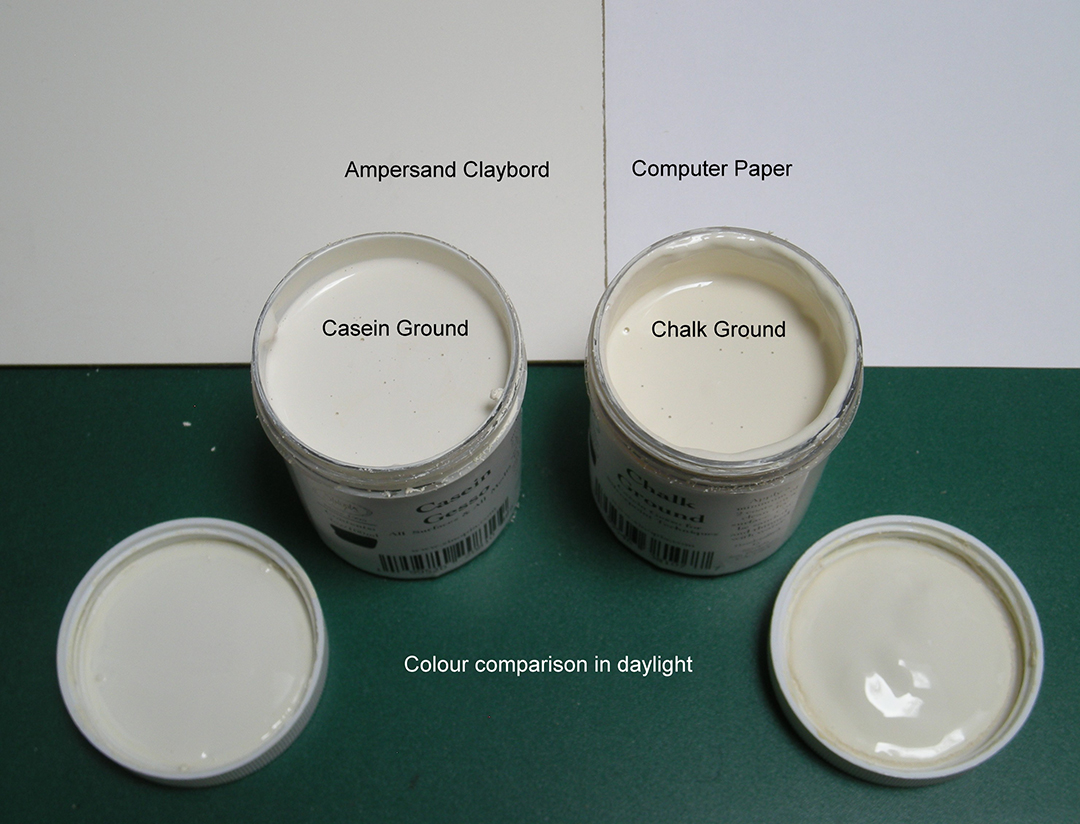 The Chalk Ground Casein Gesso is slightly warmer in colour than the Sinopia Casein Gesso, which is close to that of an Ampersand Claybord.

After this extra curing time had passed, I had success with the sanding. It didn’t take much work to make the surface feel smooth enough for my liking. I’m guessing that the relatively long drying time between coats allows the brush strokes to settle out before they harden. The sanded surfaces of both the casein and the chalk grounds were soft to the touch and warm in colour.

I usually prepare finished panels with a couple of coats of untinted egg yolk and water in a ratio of 1:6 before I begin painting, so I did this next. Interestingly, I could feel both grounds biting back as soon as I started brushing. This would seem to be an indication of a high level of absorbency, as if the egg mixture was being drawn immediately into the ground. After the first coat had dried for a few minutes, I applied a second. Within a few minutes I could see a subtle difference: the dry surface of the casein panel had a slight sheen, whereas the surface of the chalk panel was more matte.

In my experience, letting this first layer of egg cure for awhile helps to minimise the potential for lifting, and it’s something that I do with most of my egg tempera paintings. So I waited until another week had passed before transferring my drawings to the panels and starting to paint, blocking in with my usual, early-stage broad strokes. What a delight! I experienced no lifting. The paint dried quickly on both surfaces. And, unlike my previous experience with other panels, when I tried scratching the first layer with my fingernail, the paint remained stuck to these panels unless I scratched really hard. Brilliant! A fine surface that can take a little rough handling: what more could an egg tempera painter ask for?

As I build up an egg tempera painting, I like to buff the surface with a flannelette cloth to bring out the sheen. Both of my test panels responded well to this treatment. Additionally, once I’d put a few layers down, I noticed no difference in the relative shininess of the two surfaces. My initial observation that the Chalk Ground was more matte no longer held true. Now that the paintings are nearly done, I find that I have to look at the labels on the backs to remember which is which. 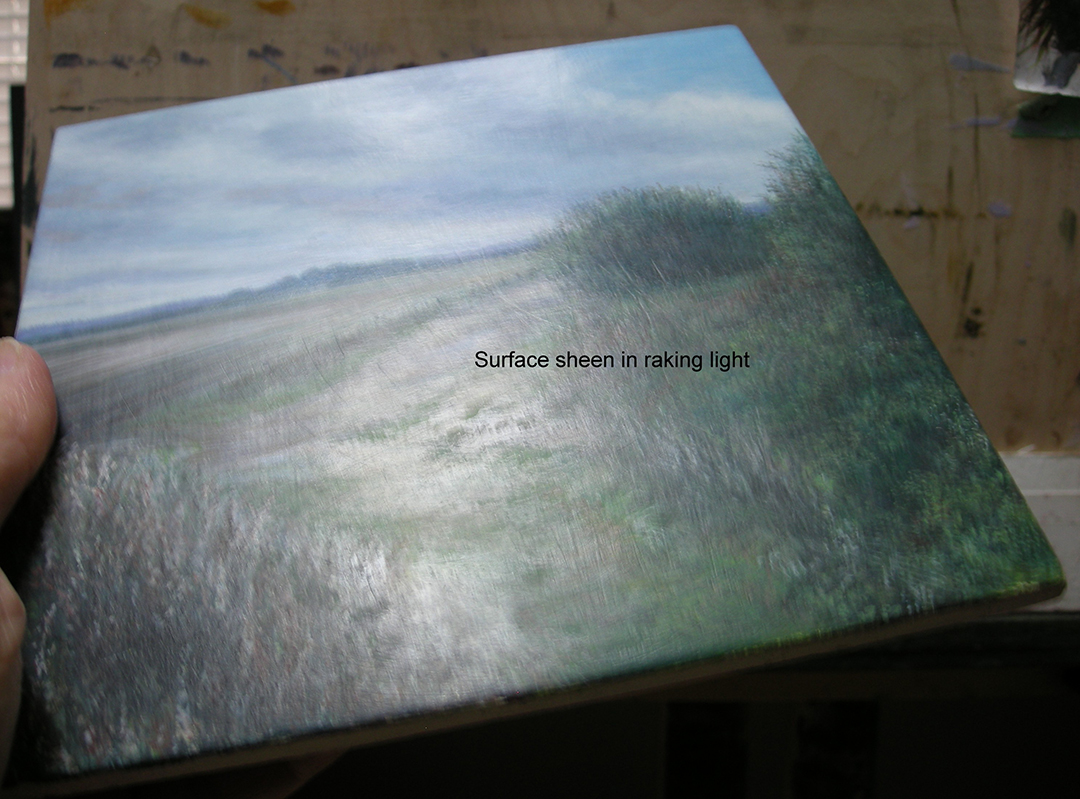 After being buffed with a soft cloth, the surfaces of both paintings develop a noticeable sheen.

In summary, I love these products. I would happily use either one to prepare a panel for egg tempera. If you’re just starting out, I’d recommend the Chalk Ground over the regular Sinopia Casein Gesso, simply because it is slightly more absorbent than the casein in the early stages, and the more absorbent, the better. Both take the paint beautifully. If you want to start a painting tomorrow, however, these Sinopia grounds are not the product for you; stick with Claybords. But compared to cooking a traditional gelatine-based gesso on a double boiler, this is dead easy. Stir well and apply. Just be prepared to wait at least a week for curing after the final coat. Sanding is a breeze, and if you like to sand a lot, you can always apply more than four layers before you start, just so that you don’t end up rubbing most of the ground away. Highly recommended. 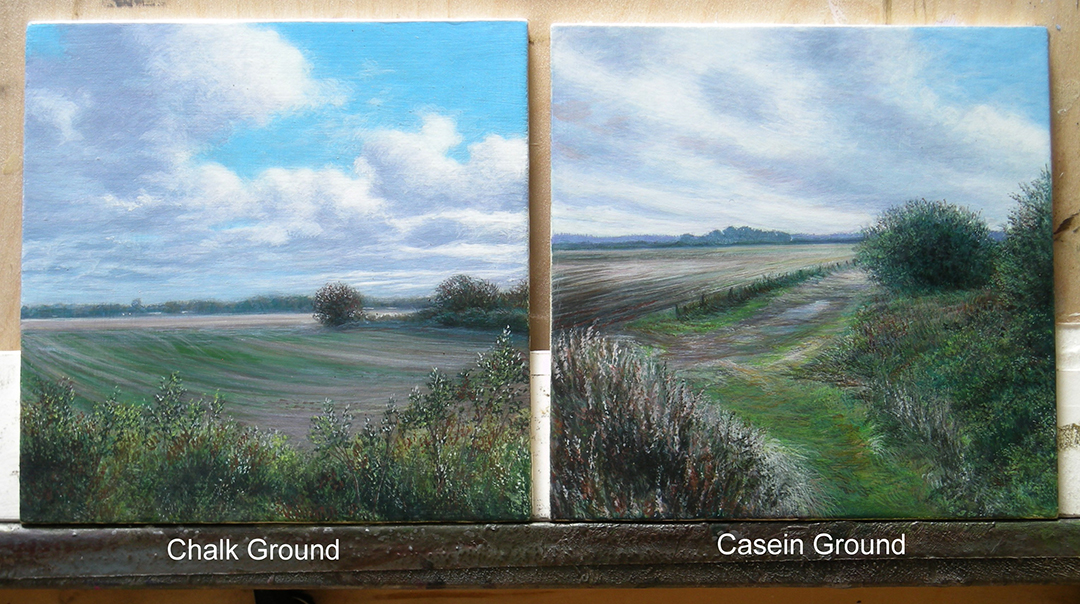 Work in Progress by Leslie Watts: under several layers of egg tempera, the grounds are indistinguishable.

Sinopia Casein Gesso and Chalk Ground Casein Gesso for Silverpoint are both available from Jackson’s, as are a wide selection of grounds and clay boles by Sinopia. These grounds are suitable for preparing a painting surface for many mediums, such as oil and acrylic, if the artist wishes to have an absorbent surface. For more information and to purchase these grounds, please see the Sinopia section on jacksonsart.com.

If you would like to read about the primary use of the Sinopia Chalk Ground Casein Gesso, as a ground for silverpoint drawing, this product was reviewed for the Jackson’s Blog by the silverpoint artist Lauren Amalia Redding.