Paula Nahmod’s Paintings Capture the Energy of The City

Paula Nahmod paints pictures that capture the energy of living in Buenos Aires. Her compositions are Roy Lichtenstein’s for the modern age – pop art that has been layered, chopped, changed and spliced to create an explosion of colour and form. Her works are visual allegories for city dwelling across the world. Paula Nahmod’s painting ‘A-diccion’ won second prize in the Jackson’s Open Art prize 2016. I was curious to learn more about the artist’s work. 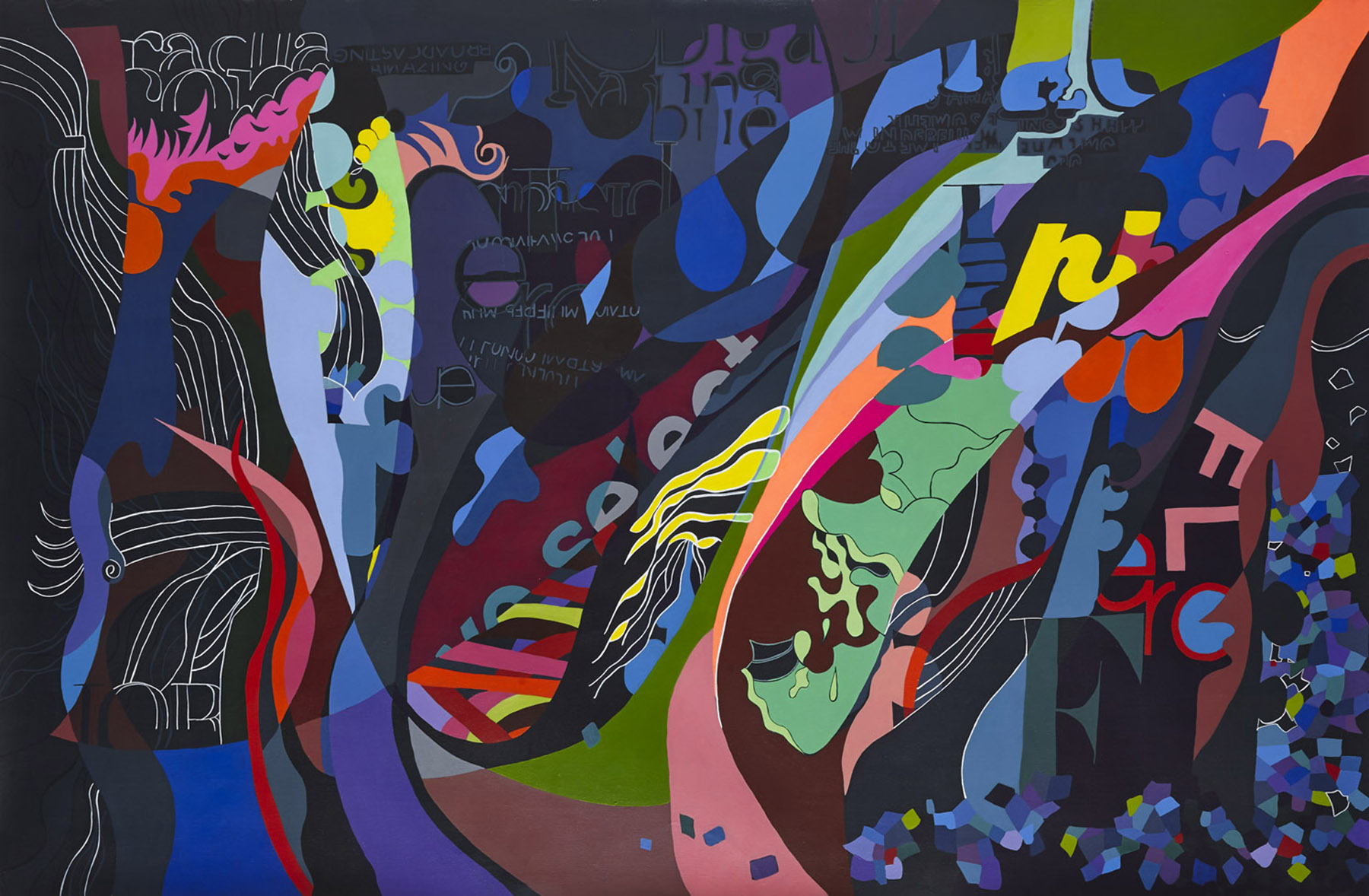 Lisa: For how long have you been painting and where did you learn to paint?

Paula: I’ve been painting since secondary school. At the beginning I painted with tempera on paper and I used to draw with chalk on a very big blackboard I had in my room. When I finished my Architecture Degree at the University of Buenos Aires I started to go to artist’s ateliers to learn more. Carolina Antoniadis was my main teacher. 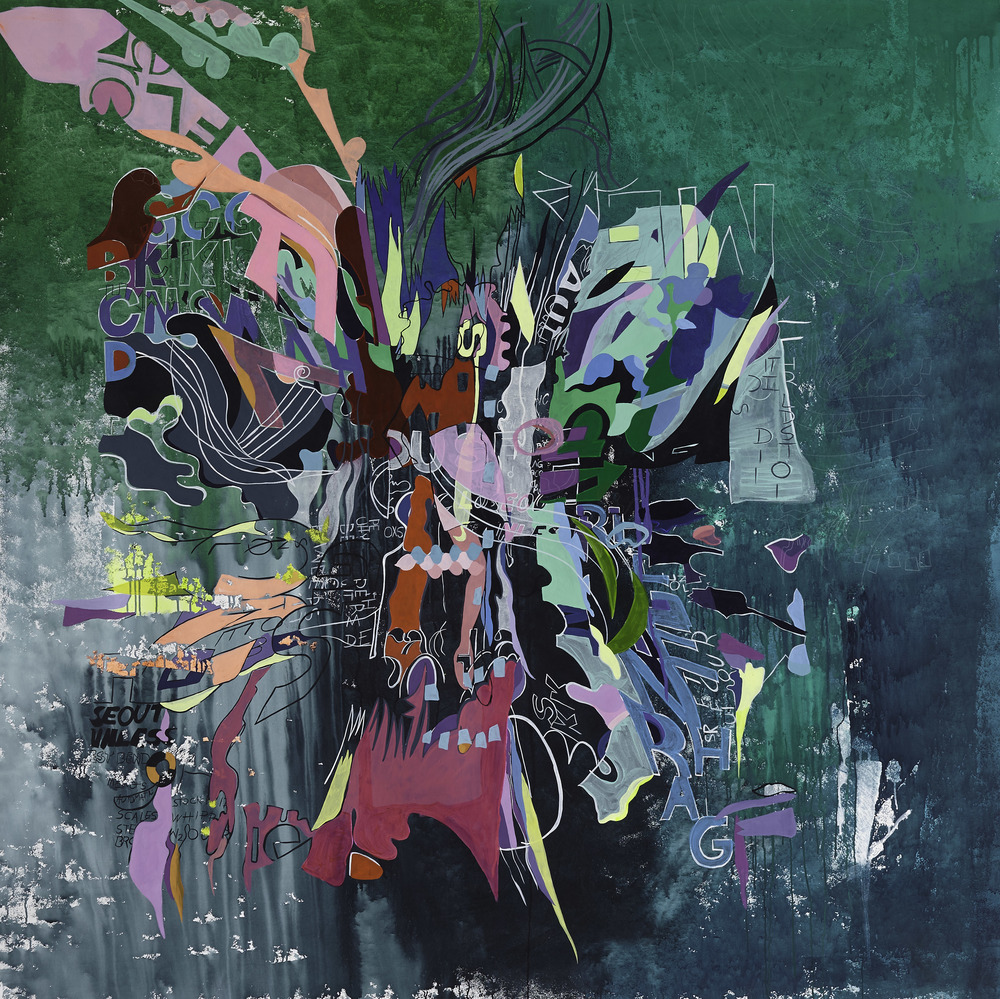 Lisa: Can you tell us a bit about how you developed the composition for the work ‘A-diccion’ – I imagine a lot of drawing was involved before you started to paint…

Paula: Yes, it’s true! I always start with a sketch before I start to paint on the canvas. In “A-diccion” I used several sketches overlapped. I begun with a digital drawing that I prepared using photoshop filters of a painting I did before. I transformed it in an explosive image on which I painted another image on top like a layer. I like working in two or more layers to create a sense of depth and also the idea of many situations happening at the same time. 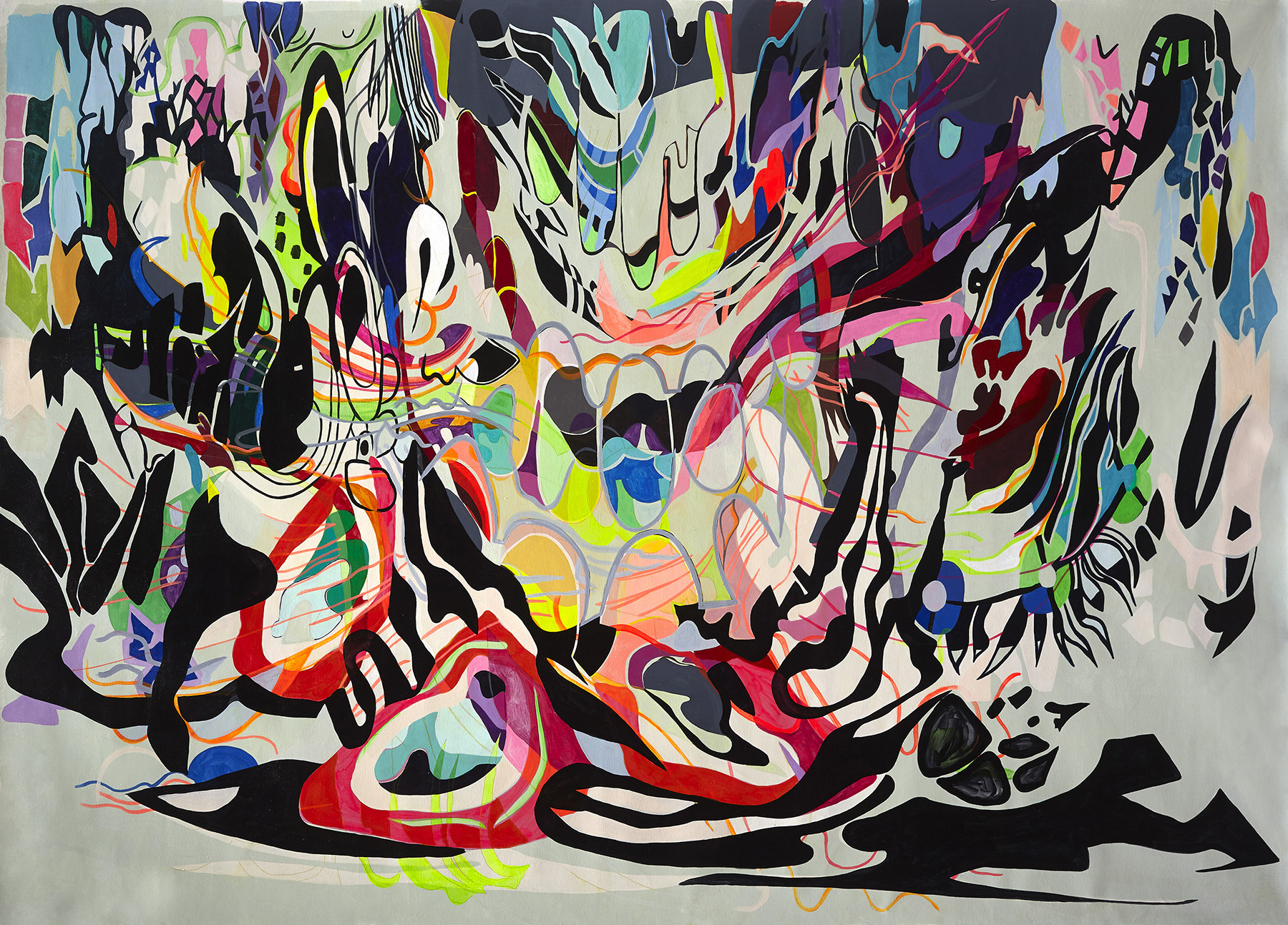 Lisa: What influences your work the most?

Paula: My work is mostly influenced by the city of Buenos Aires; like many crowded cities it’s very dynamic, with plenty of contrasts.

The painting is the result of layering several implosive and explosive images that have been taken from the streets of Buenos Aires. This city, overcrowded with people, cars, buses, visual publicity and extremely loud noises, generates in me a sense of alienation. I lose myself in the overstimulation of the modern city topography. A feeling of non-place (M. Auge) and territory limits blurred by communication networks colliding in different dimensions. 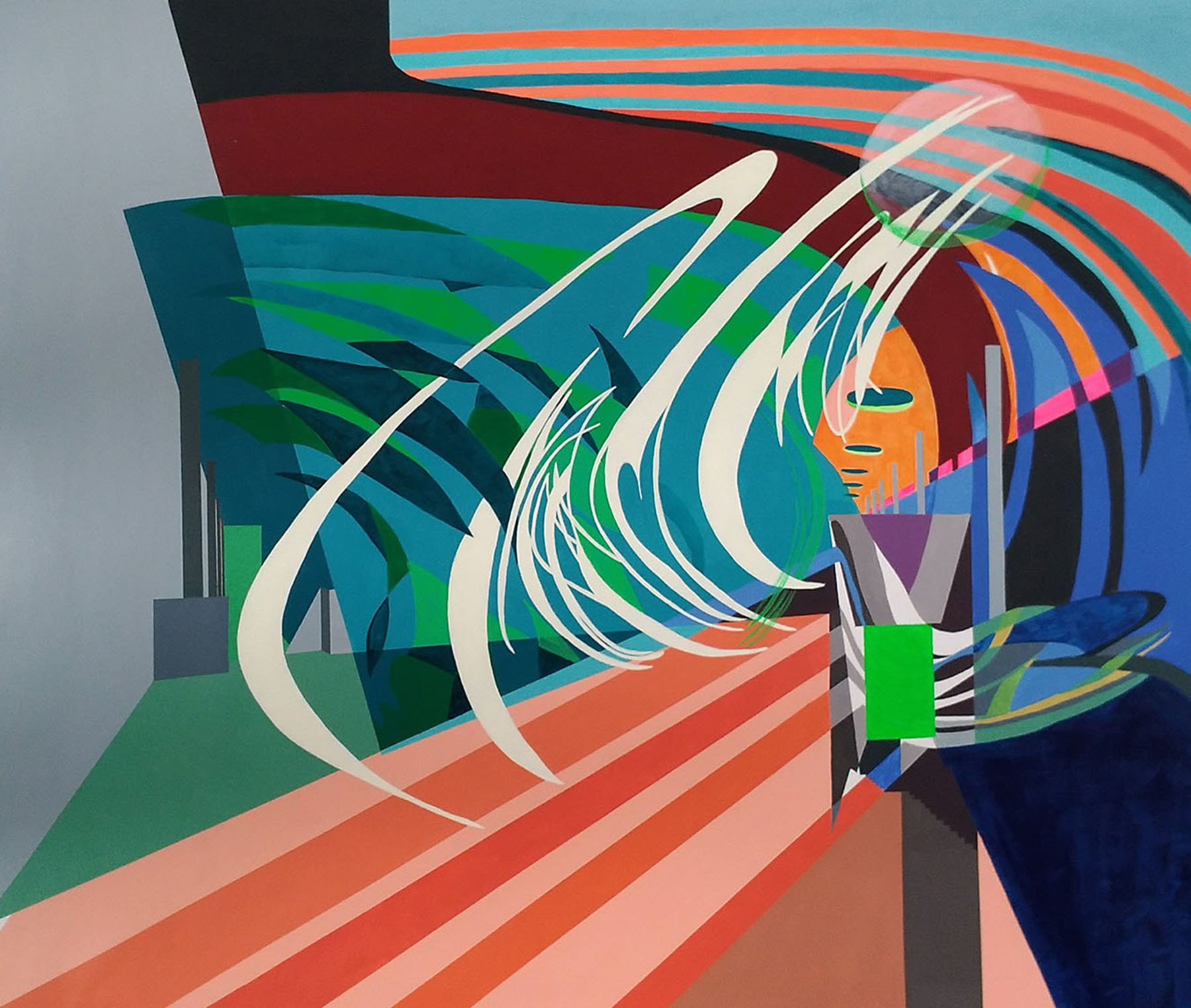 Lisa: Can you tell us more about how you source the imagery for your paintings?

Paula: I take pictures of many situations I capture in the streets but I also look for images in magazines of architecture and fashion too. I work with the overlapping and deformation of these photos combining them to create some suggestive image. 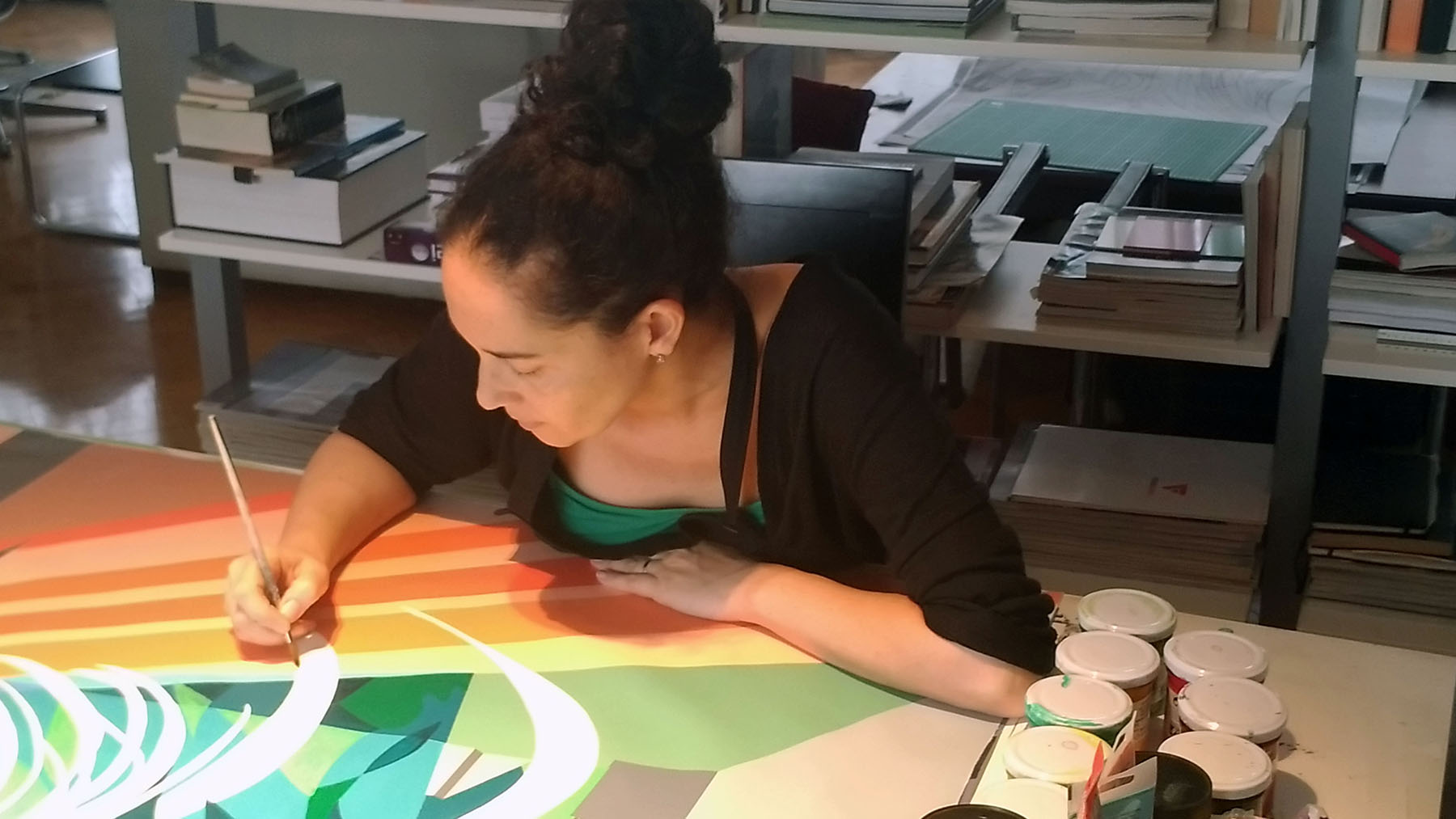 Lisa: What paints do you most like to work with?

Paula: I prefer acrylic and flashe because they dry quickly so I can paint over and over the different layers without waiting too much. 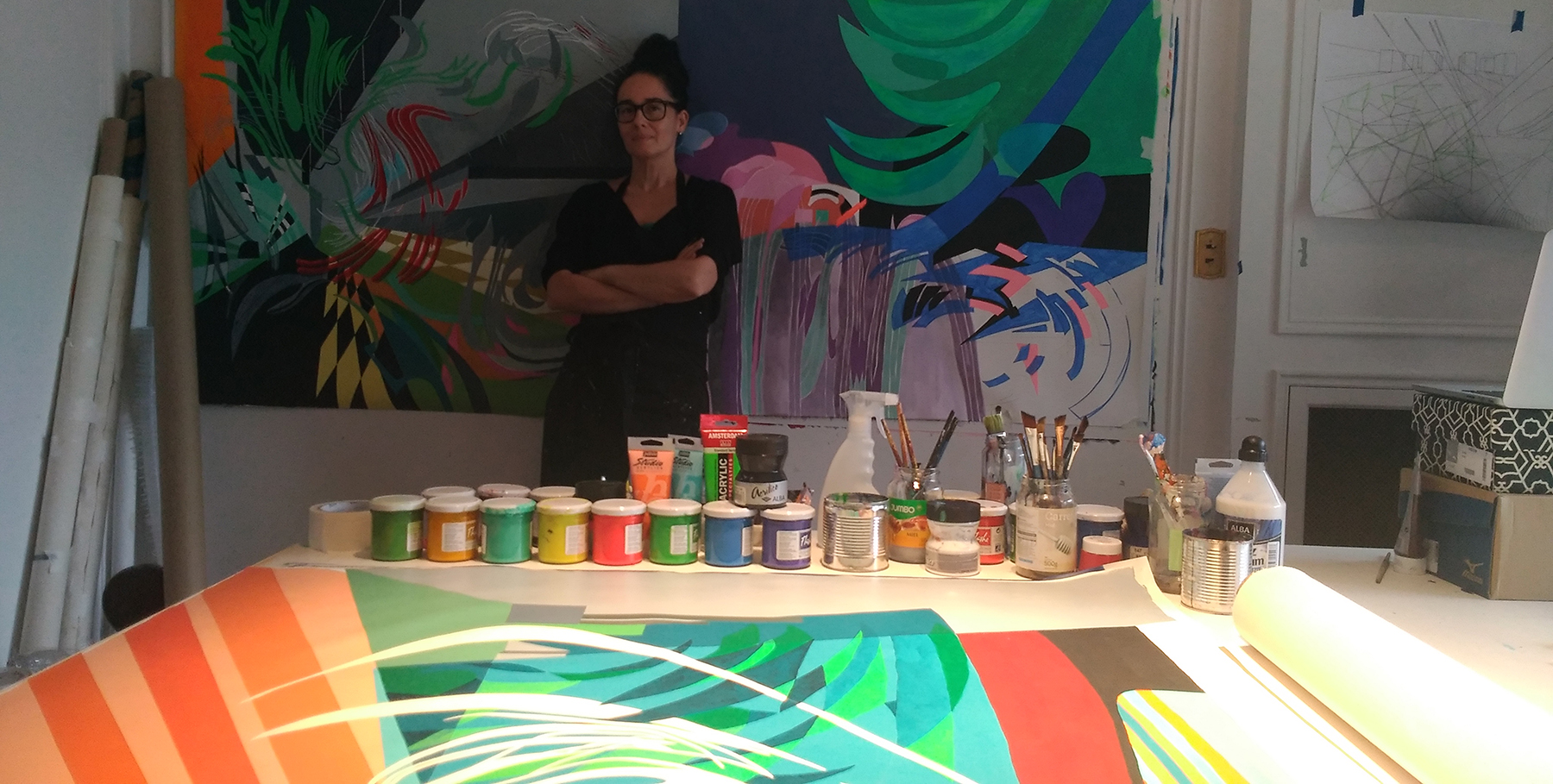 Lisa: Where do you do the majority of your work? Can you describe your work space to us?

Paula: I work in my studio most of the time, using my computer when I create the sketch at the beginning. It used to be in my house but I’ve just moved to a bigger place; one I share with other artists. It is an amazing place, formerly an old power plant where there are many studios with a big sunny patio in the middle of the building. 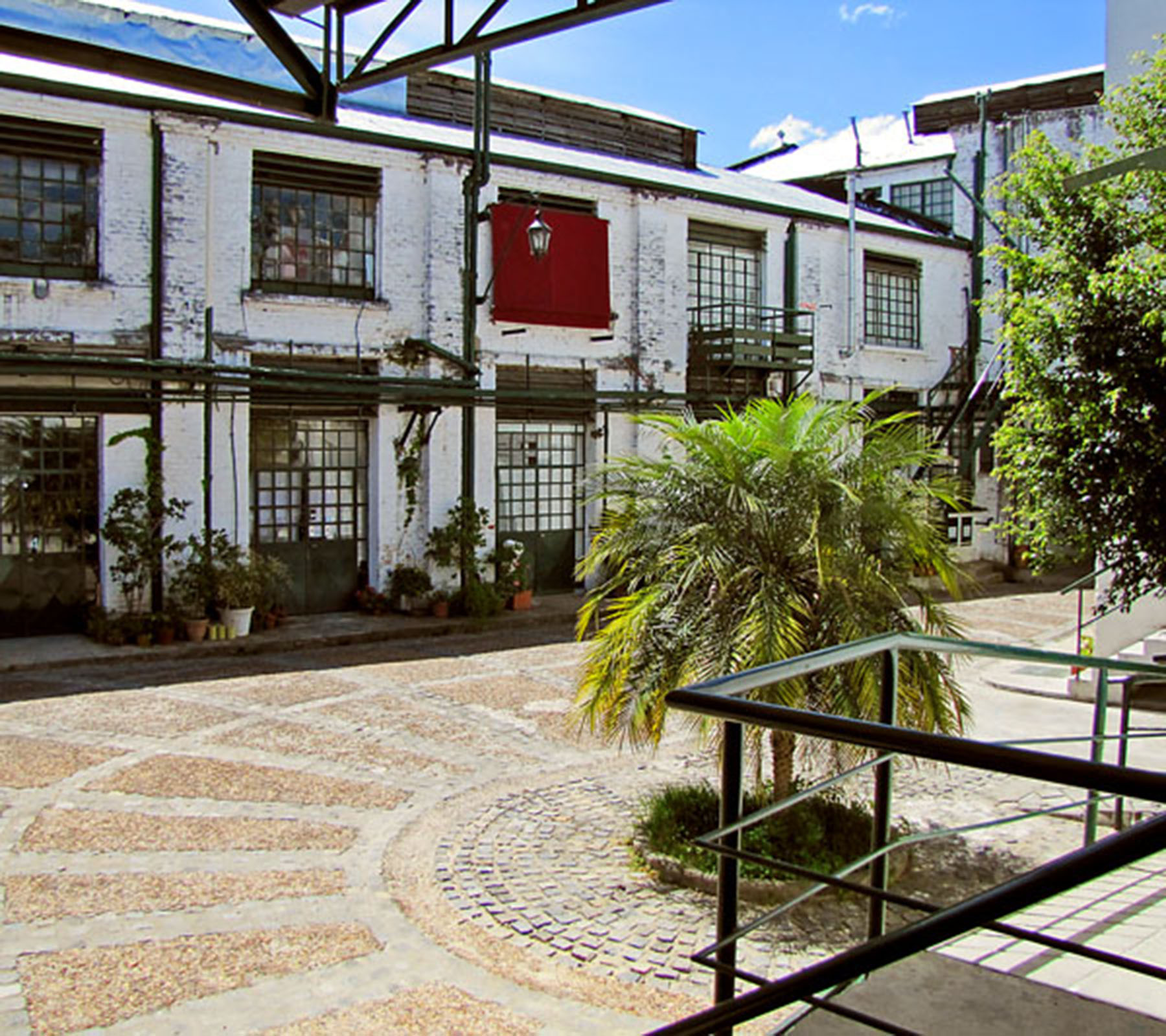 Lisa: Can you describe a typical day in the studio? What are the biggest challenges that you face?

Paula: Generally when I begin a new series, I take my time to think how deeper can I go after the work I’ve been doing before. I trace several premises or rules like an intention. I also read texts that sure will inspire and reinforce the ideas in which I am working at. Now for example I am drawing and sketching a lot until I feel that I have enough material to start painting them in a big size. In the scale changing process something occurs and the sketch is no longer enough and I just let it go and continue working with the painting and what it wants to be. 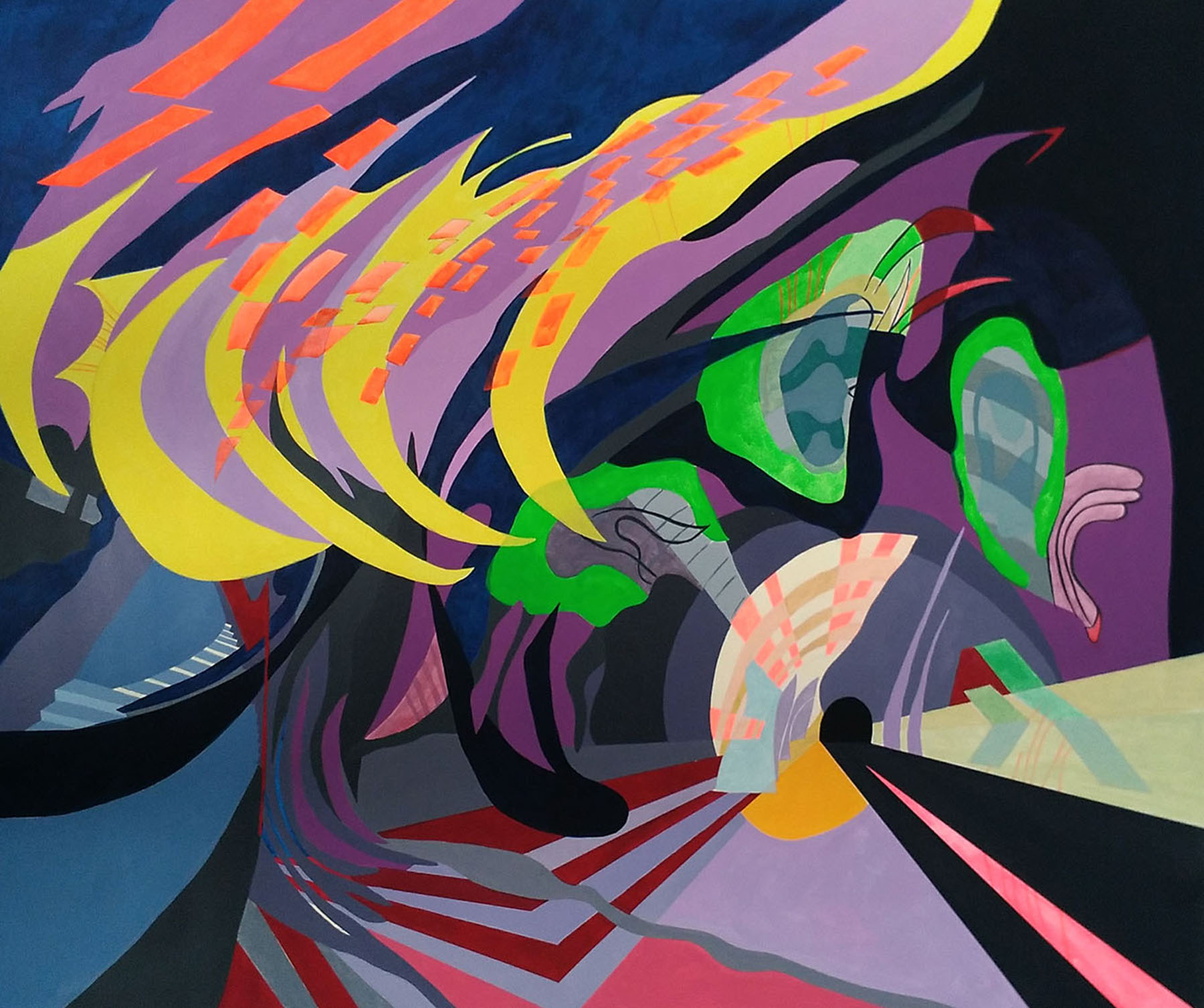 Lisa: Can you tell us a bit about the art scene in Buenos Aires – are there many galleries? What kind of art is popular? And is it important to you to reach an international audience?

Paula: The art scene in Buenos Aires is now very interesting. There are many gallery circuits in different parts of the city.

Buenos Aires has more than 3,000,000 inhabitants and an artistic culture renowned worldwide thanks to first class museums, public collections, libraries and exhibition spaces like PROA which gave the La Boca district a new vitality. The city has more than 80 galleries and bright new ties with the Art Basel Cities initiative.

For me it’s very important to reach an international audience, that’s why every time I have the opportunity of exhibiting outside Buenos Aires I say “Yes!”. This year I ‘ve been exhibiting in Mamia Bretesche Gallery in Paris and also in The Other Art Fair in New York. 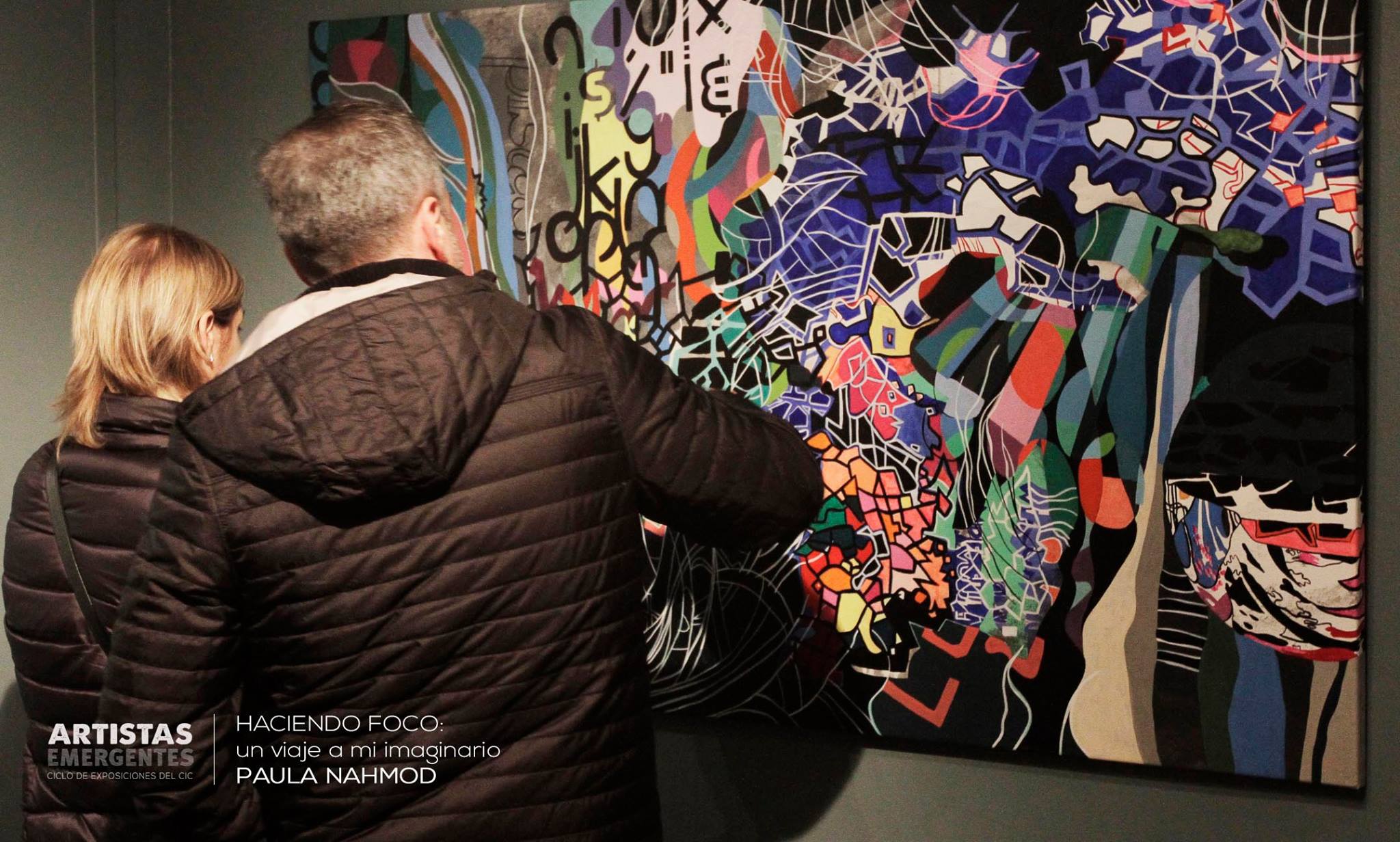 Pauls: Now I am working on multi-perspective images. I’m now really building on my background in architecture! I’m inspired by 3D render and video games’ images, heterogenic perspectives from surveillance videos, and space conceived as stacked horizontal layers from vertical perspectives you would see from a drone.

All these generate a new visuality that moves out from lineal perspectives and approaches to the realm of multi-focal images. I’ve been reading Hito Steyerl’s ideas about these concepts and they really captivated me. 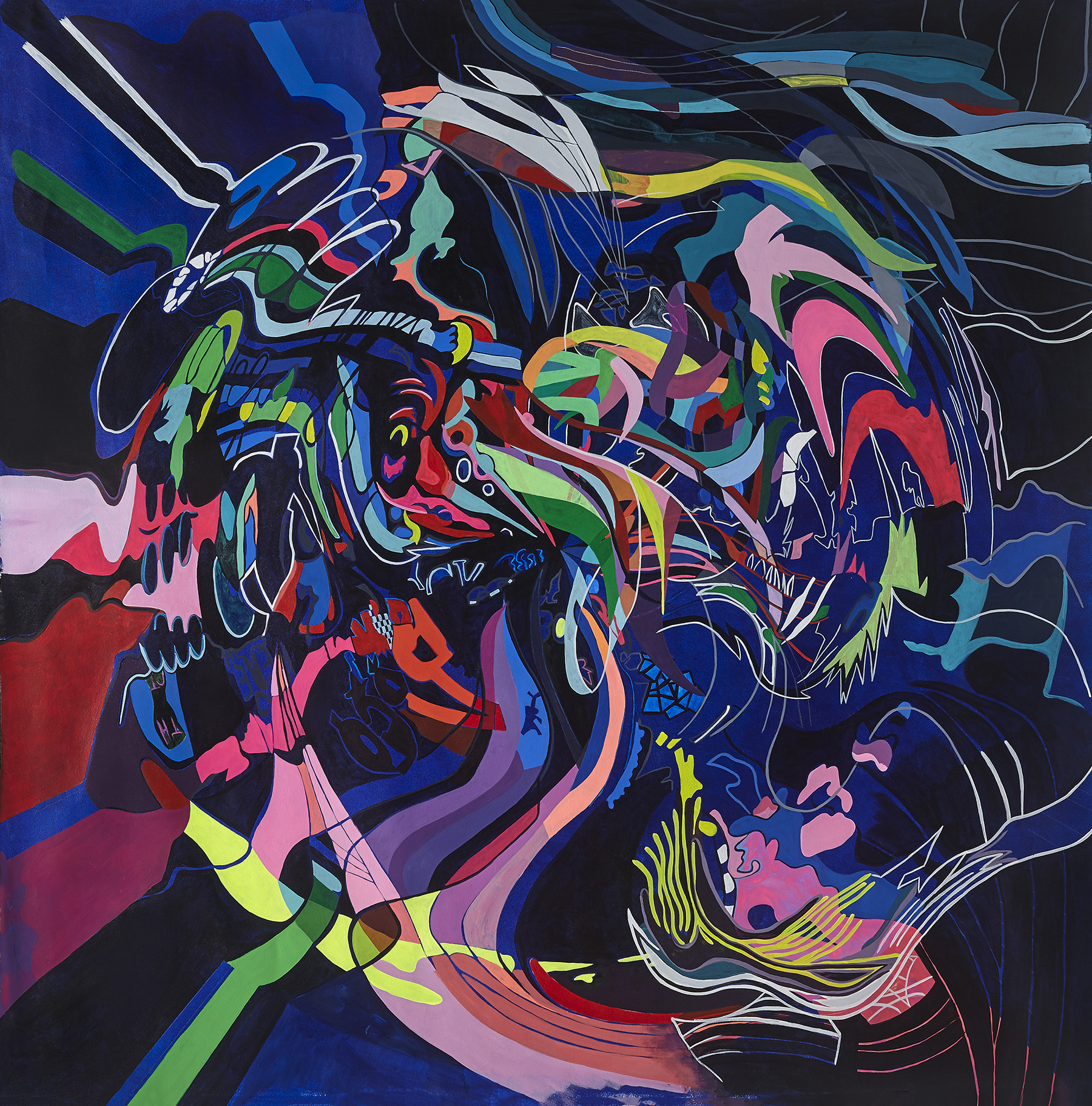 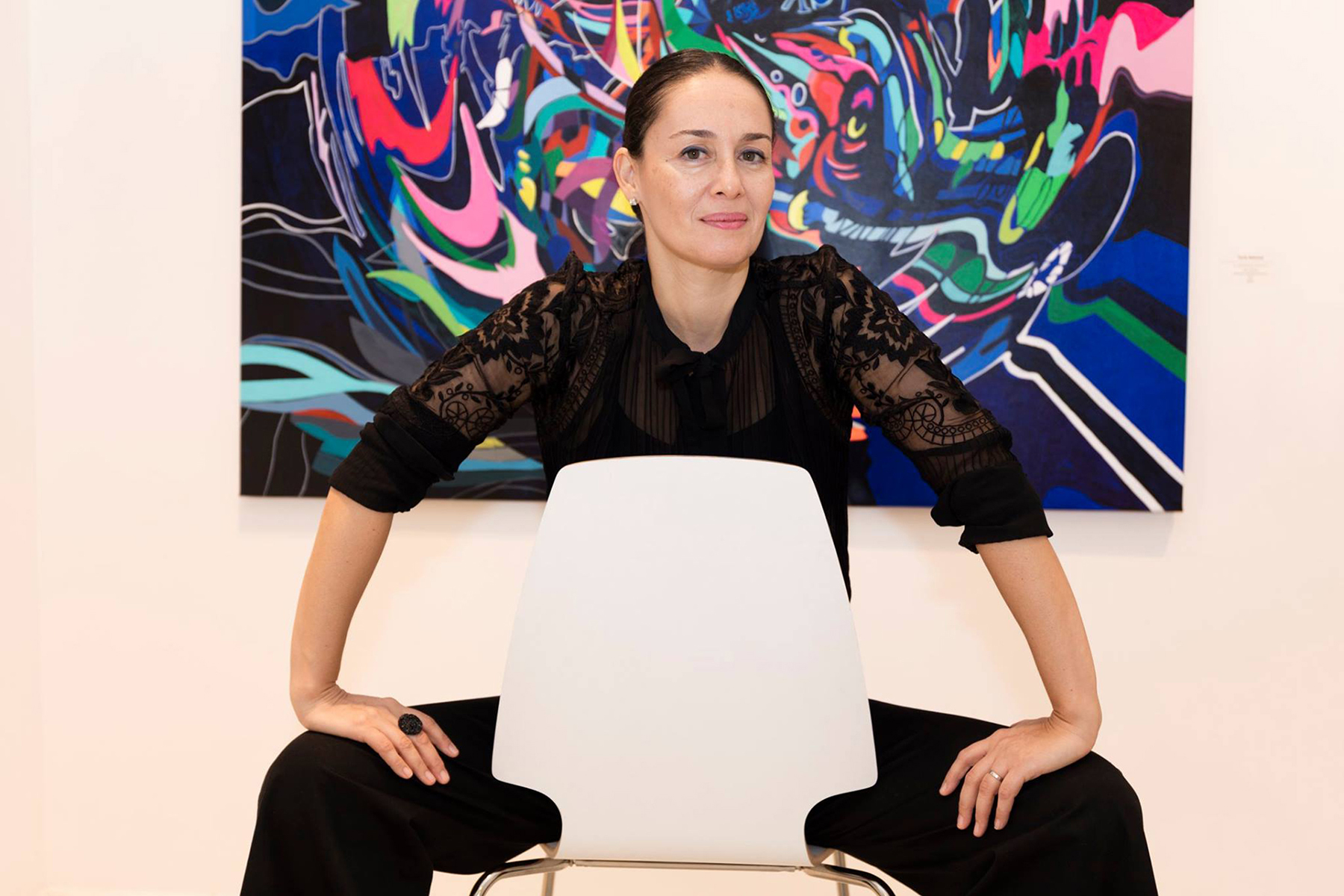