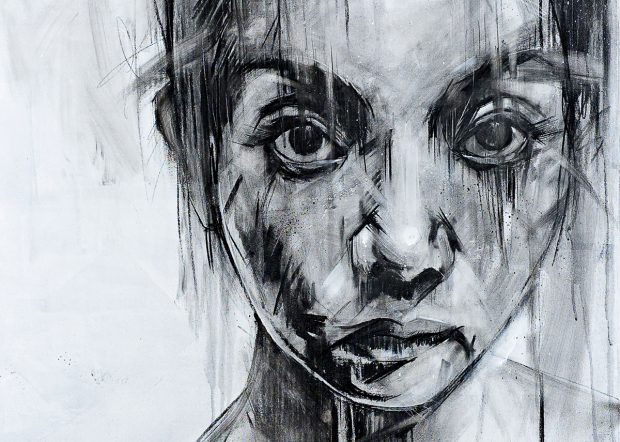 ‘I love the way that every piece of popular culture from the recent past is smashed together into a garish soup and regurgitated into real life with absolutely no boundaries’. Russ Mills combines moments of contemporary life, expressive mark making and a wide range of mediums to make beautiful, emotional portraits that are represented by the Red Propeller Gallery, Devon. We caught up with him to discuss the shift in his recent work and find out more about his practice.

Debbie Chessell: Hello Russ, thank you for talking to us! According to the Red Propeller Gallery you describe your work as ‘Kitchen Sink Realism’ – can you tell us a little more about what that phrase means to you?

Russ Mills: ‘Kitchen sink surrealism’ was an ill conceived term I came up with in 2008 to accompany my debut solo show at Red Propeller. I wanted something fairly ambiguous and yet not too hi brow to describe the work. I was still finding my way in subject matter and had a tendency to plant animal heads onto human torsos, that was the surrealism part, the ‘Kitchen sink’ came from the way I was working, throwing everything but the kitchen sink into the images, in the range of marks, textures and strange subjects.

Where did you learn to draw? I love the way you quite untraditionally combine materials in works like ‘IBEX 3-6’, it gives them such an interesting depth of colour.

I drew pictures from an early age as a quick alternative to writing, It has felt natural for as long as I can remember. I learned to draw properly the first time I was given any advice on how to do so. On my first day at North-brook College in Worthing, we were thrown right in at the deep end, no induction just straight into  soft pencils on big paper. Before that I’d spent most of the time copying pictures out of comics and magazines. The shock and awe treatment of art college was a big wake up and the weekly life study classes were more valuable to me than anything else I experienced throughout education. I still don’t class myself as an expert draughtsman, I’m happy to be competent. Ever since art college I’ve enjoyed unconventional mixes of materials, that’s the primary reason I use the  computer to ease the process, if an arrangement doesn’t work I haven’t wasted a day putting it together and am able to start a fresh with no tears.

How do you build your works? Is there a process that you repeat or is each one completely spontaneous?

Each time I start a series of Images, it’s often as if I’m starting from scratch, mainly because my memory is so poor. I often have a rough idea or new technique that I want to explore, I then have to refamiliarise myself with every part of how I construct my images, this is hugely frustrating but always results in something new and accidental ending up in the mix. As time goes by I’m more meticulous over each aspect of the work. The initial sketch is always the foundation, at least  that’s one thing I remember how to do on repeat. Each subsequent stage is trial and error until something begins to emerge. The more recent mixed media pieces have had 5 or 6 stages of building up layers, the final stage being a total brain ‘switch off’ in order to achieve ephemeral marks that are completely spontaneous.

I’ve been following your work for quite a while now; recently you seem to have taken a big shift from very painterly mark-making (as seen in your work ‘MIA  ALIX’, 2009) to a much more graphic style, such as the drawings surrounding the figures in ‘KOPESETIK’, 2016 and ‘Breckenridge’ 2017. What inspired you to  evolve your drawing style in this way?

Mia Calix and that series of images were an exercise in minimalism, I used charcoal and water and completed each in under 6 hours, I’d not done drawings of  that scale before, so, as usual I was winging it. The contrast between those charcoal pieces and the more recent work isn’t deliberate, it’s just how things have  worked out. Kopesetik in particular was the culmination of a collection of scribbles and doodles I’ve amassed over the last few years, I wanted to involve those in  my images somehow, rather than let them fester in a pile on a shelf. The figurative elements were more carefully considered than in previous work, I’m not sure that necessarily made for a better image, maybe a tighter one.

Your paintings have so many layers to them – it’s a puzzle to guess what each mark is made of! What brands and kinds of materials do you use? Do you have a  favourite medium to work in?

I’m not a materials purist by any stretch of the imagination, I’ll use something cheap if it gives the desired effect. If I was pressed I’d say that Posca Markers are the most useful for finishing off larger works, they’re completely unpredictable on uneven surfaces and often provide nice accidental floods or splashes. Quink is a very under valued medium for interesting, unconventional results, it’s not light fast so the colour can change within hours, it also reacts with certain chemicals in paper, word to the wise though, it will bleed through nearly any water based medium so needs to be fixed hard.

How do you choose your subjects?

I like to use subjects that have a mixture of disinterest and contempt in their eyes, there’s a look in portraiture that’s almost undefinable, that has traversed  hundreds of years. A blank, yet aloof expression that most likely filtered down from relentless depictions of royalty, an almost ‘dead’ look in some cases. I don’t think I’ve found the perfect look that others have, although that gives me something else to strive for.

What’s an ideal day in the studio for you?

An ideal day is one where I actually make marks rather than just thinking about making marks, I blame that on a severe lack of focus in the periods between  projects. The summer time is precious as everything can come together a lot quicker, though, the lure of the sea is a massive distraction in what should be premium work time.

Have you got any projects coming up? Is there anywhere we can see more of your work both online and in the flesh?

For the last six months or so I’ve been freelancing for Marvel Entertainment, working on some characters for various coming attractions that I’m not allowed to mention until next year.

I’ve got several pots of personal work on the cooker that should begin to unfold in the next few months. I currently have work on display at Red Propeller Gallery in Kingsbridge, Devon. They also handle most of my online sales at the moment, I’ll be refitting my online shop early 2018, motivation and distractions permitting.