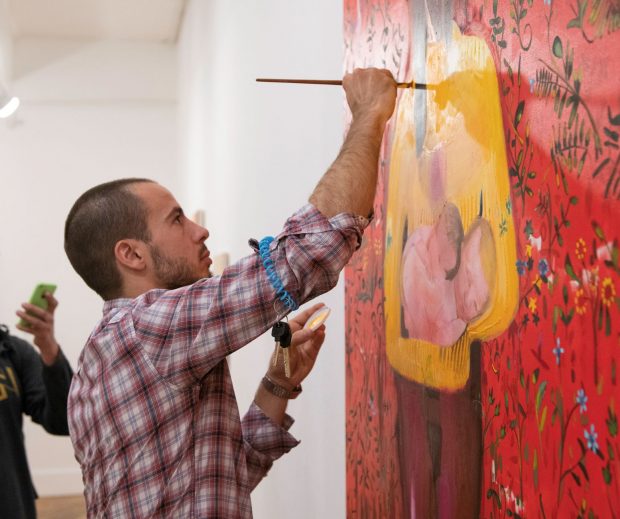 Brush (Ambrus Gero) is an artist from Budapest who currently lives and works in New York. Brush’s oil paintings are a response to the relationship between reality and fantasy, choosing objects or creatures which are grandiose in their size to explore these ideas. These luminous and dreamlike paintings explore a variety of themes, from the erotic to the spiritual. Alongside studying for a Master of Fine Arts at Pratt Institute, Brush has had a number of solo exhibitions in Budapest and group exhibitions in New York, Germany and Hungary. His painting Unicorn won the People’s Choice Award as part of the Jackson’s Open Painting Prize 2018. 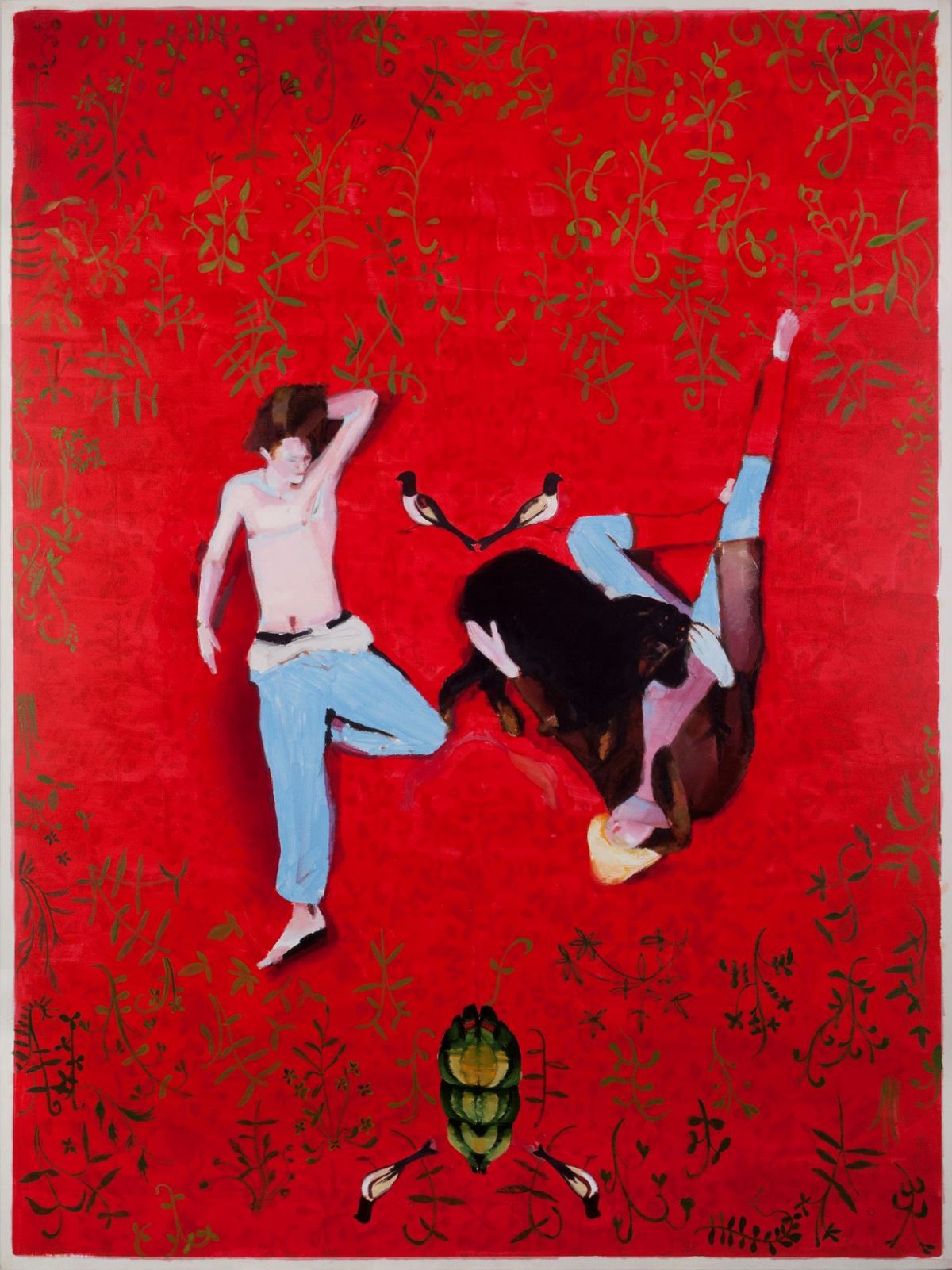 Daniel: Tell us about your artistic background/education.

Brush: When I became a teenager I started working as a graffiti artist. My father, who was a painter, encouraged me not to do graffiti, but nobody could distract me from the path that I wanted to take. Well actually, a police officer distracted me once. At the age of 18, I decided to study painting at the University of Pecs in Hungary. During the 2 years I prepared for the admission test, I visited my father’s studio and a drawing school on a daily basis. My father taught me a lot about traditional painting and drawing. Eventually, I graduated as a painter. In the meantime, I passed an amazing spring semester at the University of Hertfordshire in England, where I made a series of silkscreen prints on fabric. I also travelled around Europe, the Middle East and the United States in order to see art in galleries and museums. 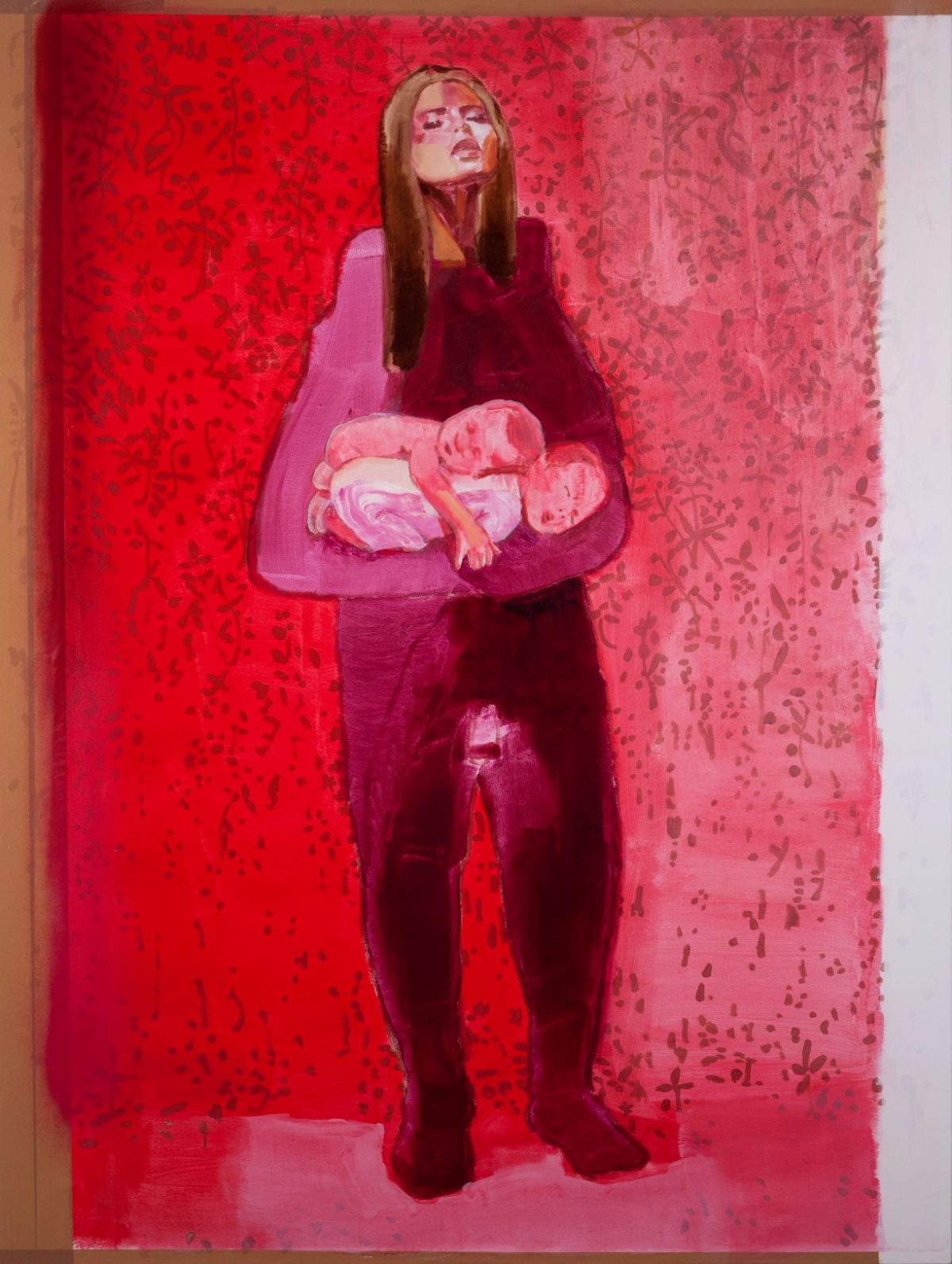 Daniel: What got you into painting?

Brush: First and foremost I wanted to tell stories through drawing, and later on I became interested in emotions and concepts as well. At some points graffiti was not enough and I couldn’t express these things on a higher level. I had tried drawing figures and I enjoyed it. Therefore, my purpose had different kinds of goals in the hope of an ambitious artistic career. 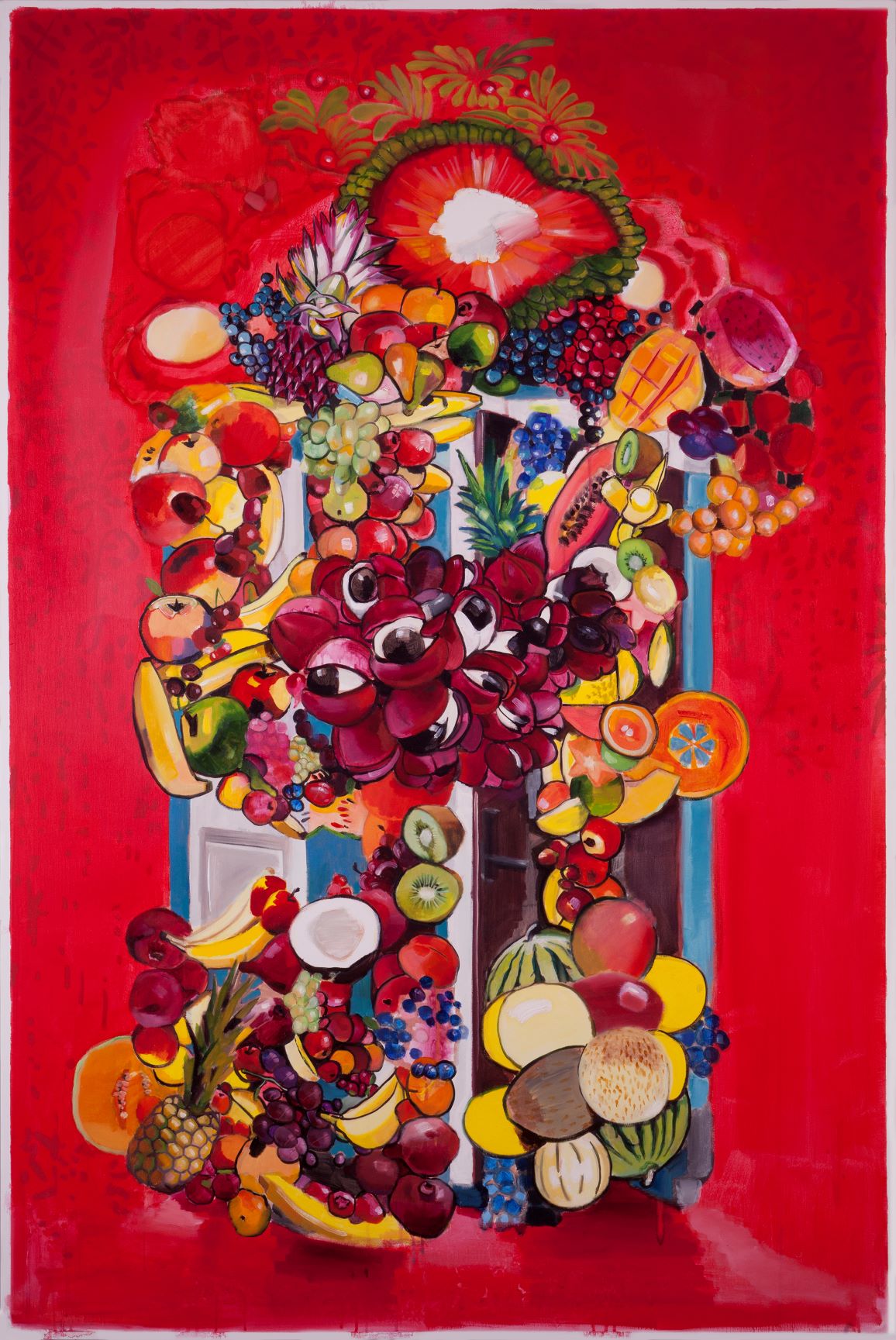 Daniel: You were born in Budapest and now live and work in New York. How do you think moving to New York has influenced your artwork?

Brush: I came to New York with a very definite visual plan of creating oil paintings, as during the last year I had created around 70 Photoshop images. Both the narrative and the technique was already there before I moved. I have met numerous students, professors and visitors in my new studio so far. I didn’t expect so much constructive feedback on my artworks. Encaustic technique (basically bee’s wax with pigments) stepped into my experimental approach. Recently, I have been combining digital prints and bee’s wax on board. As a final coat, I add oil pastel strokes. I can create more artworks with encaustic simultaneously, while I also make time-consuming large-scale oil paintings too. Looking up local galleries, joining events and opening receptions takes time; I keep the balance. 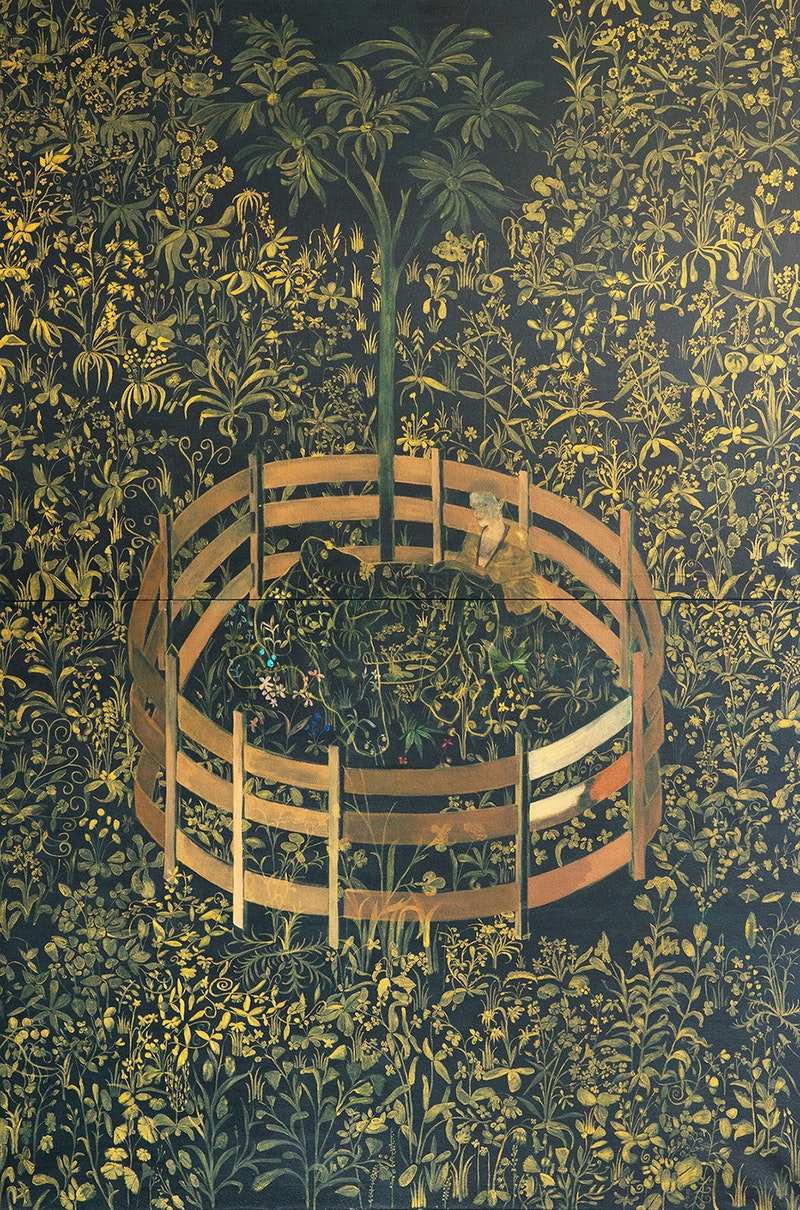 Daniel: Can you tell us about your ideas behind Unicorn?

Brush: Sure. It is a love letter to a girl. But let me start with the Unicorn’s physical description and the process. The background of the Unicorn seems black, but in fact it is turquoise cut with black; it is almost black, though. I worked on it for 4 months straight, almost every single day, only for two hours at a time. The idea was to come up with a new narrative of the unicorn. There are many symbolic interpretations that are linked to the one-horned horse. The one that I used was that the unicorn could only be tamed by a virgin. I identified myself with the unicorn. In 2015, the year I created it, I got to know a natural healing process called Prananadi, that works through tender hand touching. I merged my experiences of the Prananadi, the girl and myself, into one large-scale oil painting. As for that, in the middle of the picture the girl helps the unicorn to chill. I created a trick at the end of the painting process; the ‘garden’ is painted a sort of dark turquoise and gold and only in the field surrounding the unicorn are the flowers painted colourfully. 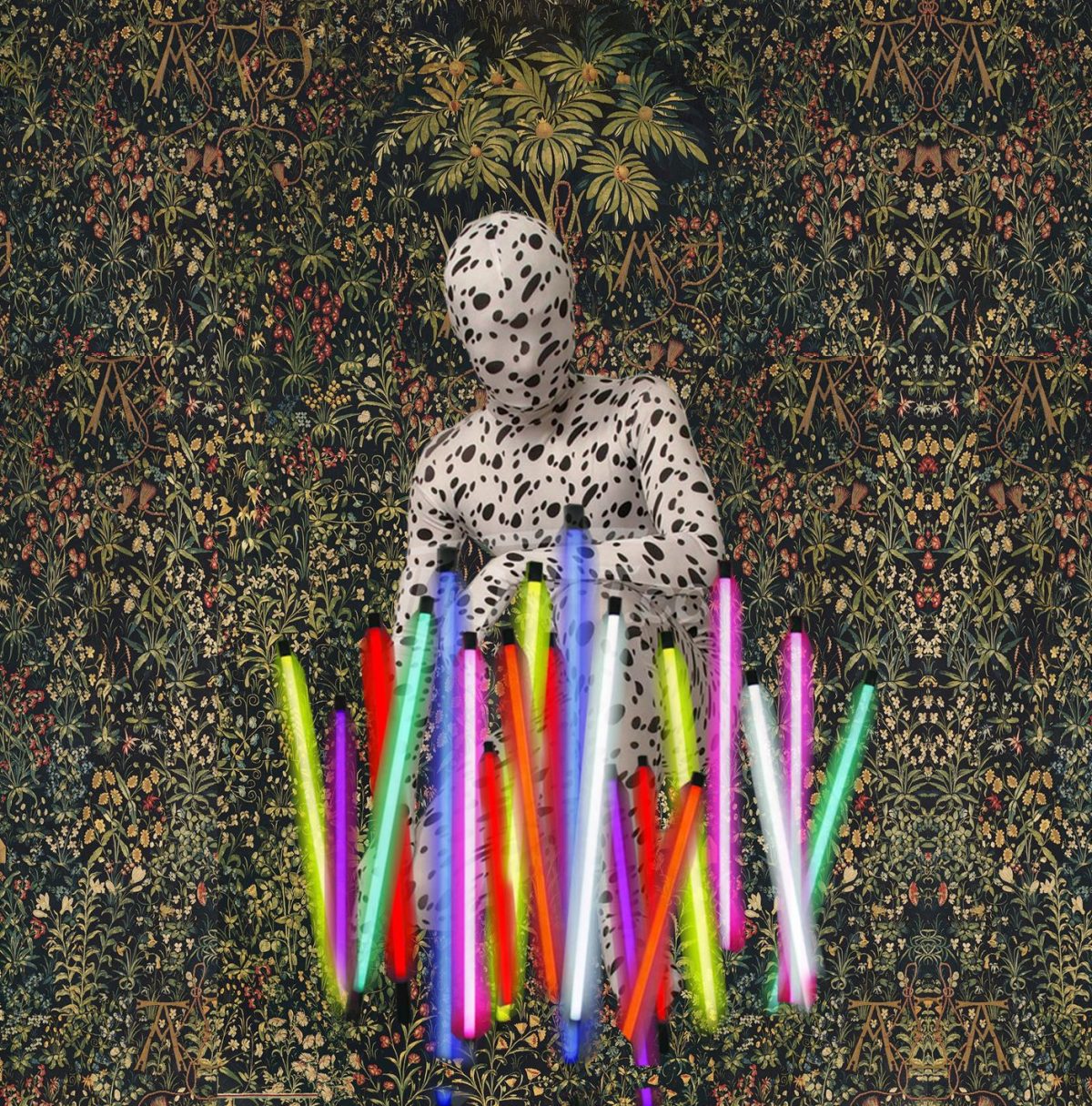 Daniel: You’ve spoken about how you were highly impressed by the colours and poetic subjects that appear in The Unicorn In Captivity – one part of the beautiful Unicorn Tapestries that were made at the turn of the sixteenth century. What other influences or themes shape your work?

Brush: The Dalmatian breed and Dalmatian suit on human figures have been an ever-returning theme in my artworks for 3 years. This is because I am interested in the possibility of the entire population’s unity, that I call United People or United Creatures. The 101 Dalmatian puppies created a pretty much solid group; if they could, why don’t we do the same? Their black and white colour is an icon for diversity. To sum it up, animalia, anthropomorphism, family – in terms of unity and a household – are all on my agenda.

Daniel: Unicorn is an impressive large-scale work – three x four metres across two panels. Why are you interested in the idea of scale?

Brush: For me, the first tipping point towards a successful large-scale painting was the painting Naiv (pictured above). Naiv’s main development was that the common proportion of the little girl and the big throne was significant. Some said it stole the show. Since that point, I have been pushing this idea of extreme proportion further. In my opinion, the difference between a magnificent small artwork and a magnificent large-scale artwork is that the bigger one is even more impressive. The expansive scale resonates with the extensive mind or the sequence of ideas. 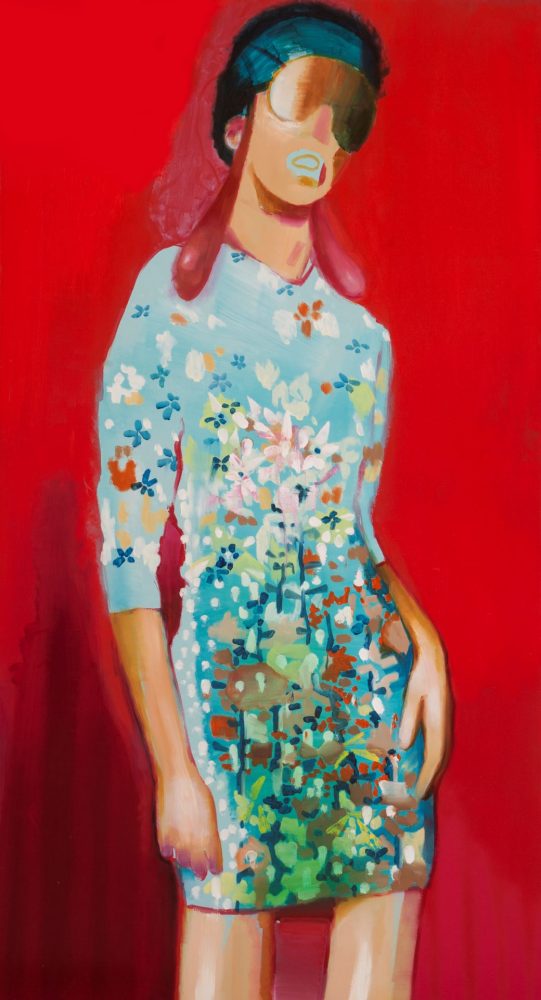 Daniel: What do you want your work to convey to your audience?

Brush: At the moment, I want to be the first artist whose art makes numerous people cry tears of joy or amazement. If I thought in cohesive solo shows, it would happen. 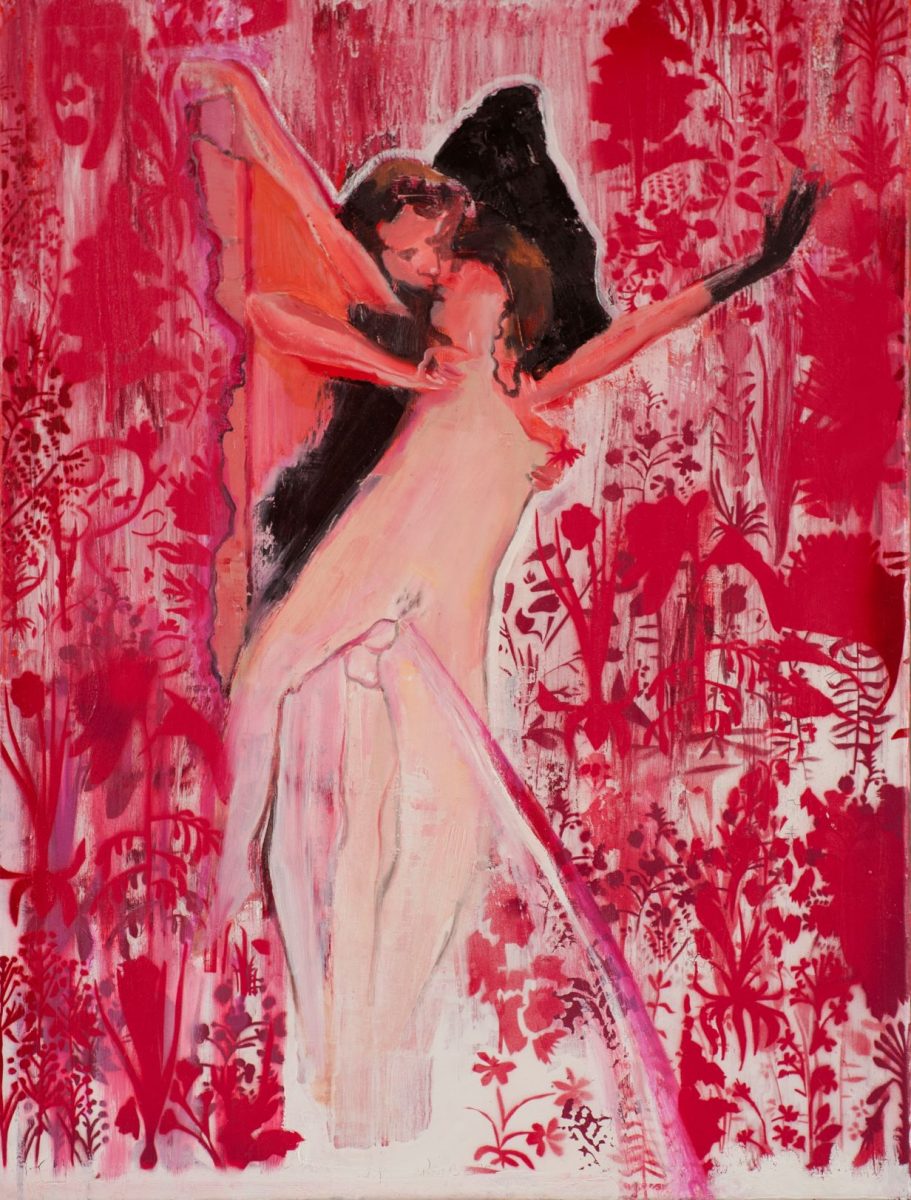 Daniel: Who are your favourite contemporary artists? Where do you go to see art?

Brush: Michael Borremans, Michael Raedecker, Nicole Eisenman, Janson Stegner, Dustin Yellin, Kim Dorland, Lou Ros, Henry Holland, Ambera Wellmann, Dichon Drury, Siro Cogusi, Lisa Reihana and Allora & Calzadilla from Puerto Rico. In the next half a year I will concentrate on Brooklyn-based, non-profit and smaller galleries. In the second and final year of my MFA, I will explore the bigger galleries in Manhattan. 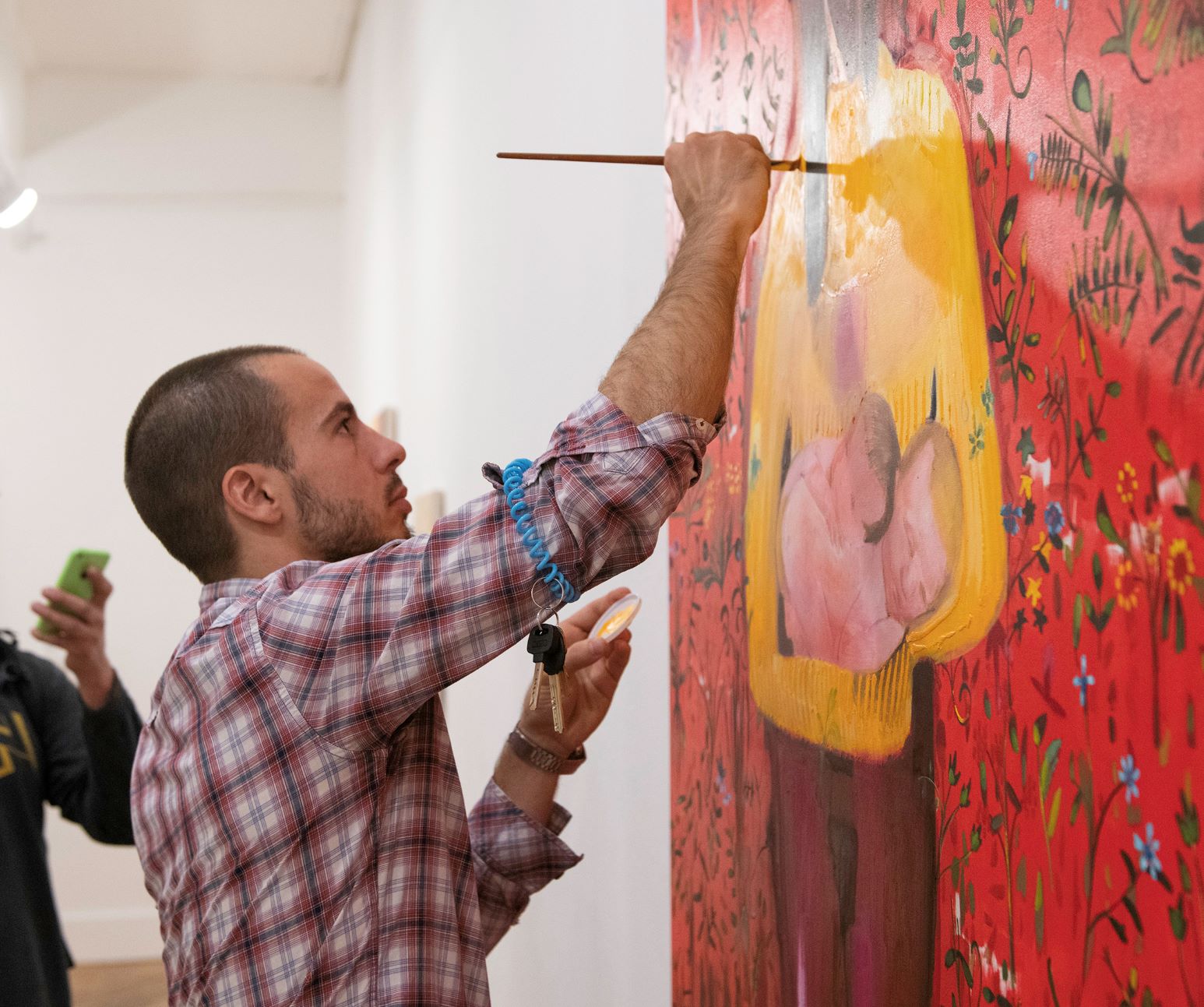 Brush working on a painting in the studio.

Daniel: How important is the process of painting for you? Could you describe your process for making artwork?

Brush: I start with the idea and then I collect images online and take photos on the streets or wherever I found the motif. Then I Photoshop the collected images. After that, I project the image on a canvas or board. I paint only the outlines in a maximum of two hours. In some parts on the painting there are several layers. Whether or not it is in progress or a finished painting, I listen to colleagues and consider their opinion. If I feel they are right, I overpaint certain details. So far, they have usually been right. 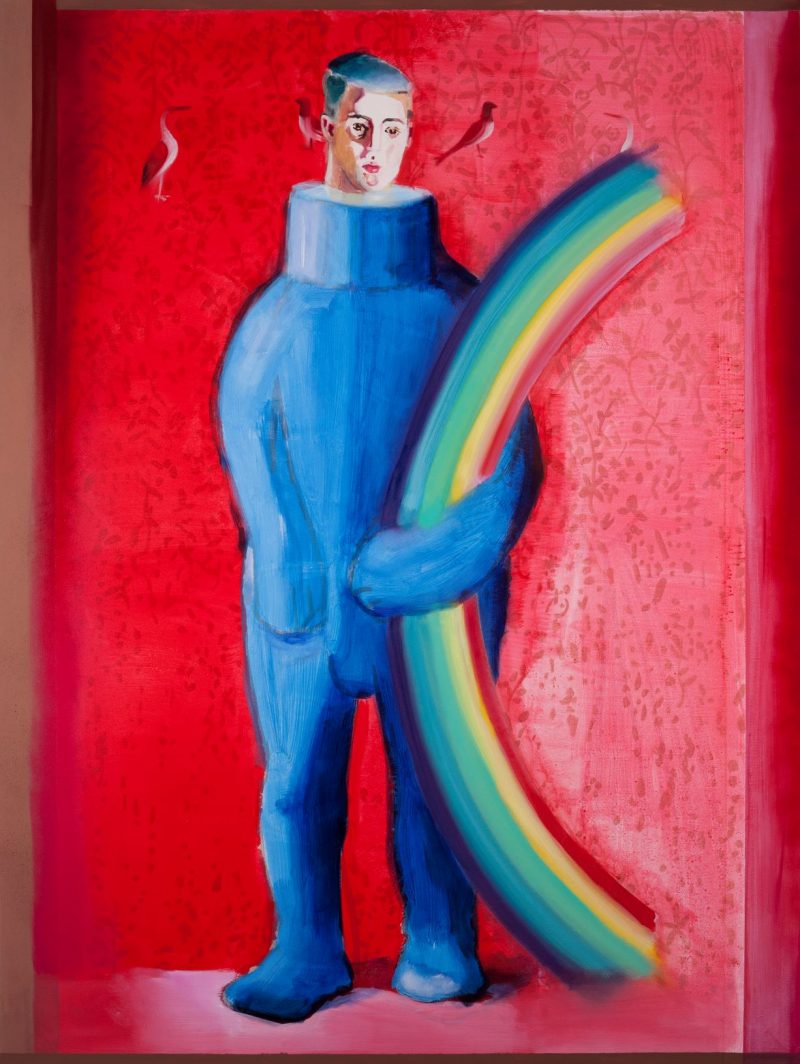 Daniel: You work across various mediums, including sculpture and video. Which are your favourites?

Brush: The videos tend to be a compressed vision of my sculptures; they are a kind of documentation. I mean, I have never tried to push the boundaries of video. And, as a matter of fact, installation and sculpture were more appropriate mediums to use in order to convey the concept of United People. This only happened in 2015, when I felt more responsible politically and socially. Painting is a constant and my one love, however, nowadays the combination of digital prints and encaustic is also one of my favourites. 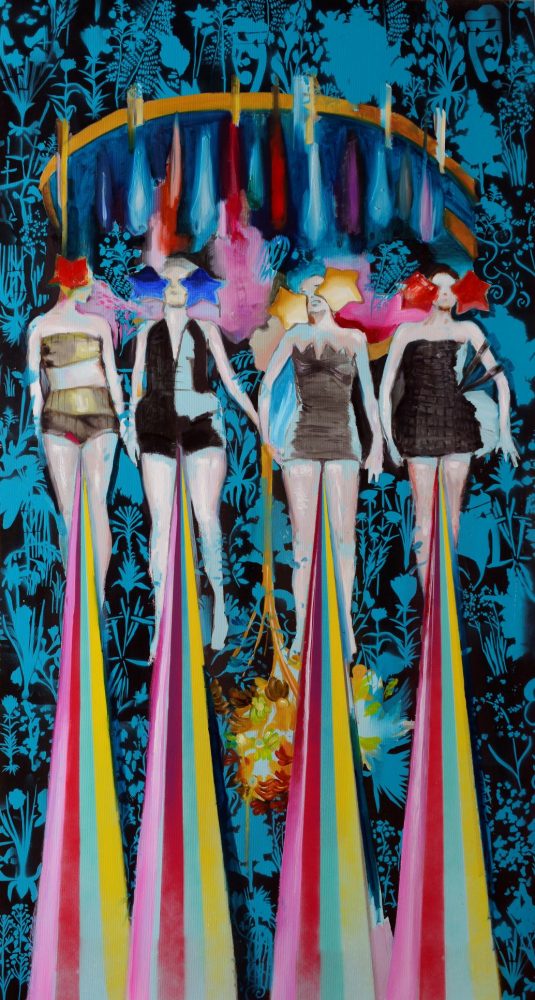 Daniel: I noticed a lot of your work is oil and spray paint on canvas. Do you have any favourite paints, mediums or brushes?

Brush: I am not picky with mediums. Of course, I like high-quality materials. I like gloss and keep matte surfaces at a minimum, unless it is encaustic. The spray paints and oil combo sounds inappropriate; I have to be very careful with that in order that they can be conserved for centuries. We do not know what will happen to the quality of these paintings in hundreds of years. Nevertheless, spray paints are a bit more ‘noisy’ than oil when comparing the two materials. 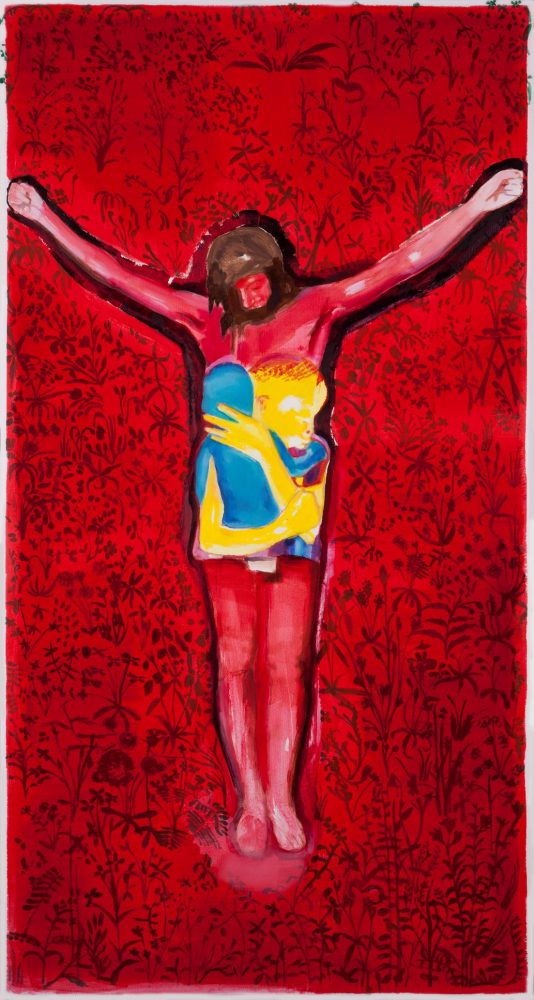 Daniel: What is coming up next for you and where can we see more of your art in the flesh or online?

Brush: I am available on Instagram, which I update weekly. My website will be at www.brush.ambition.com soon. The older one that is currently live is www.ambrus1.com. My Facebook artist page and email follow the same new name; Brush Ambition.

Other than that, I will be selling my digital prints at Pratt, Main Campus, Student Union, on December 3rd 2018. As graduate students we will have some open studios at the Pfizer Building in Brooklyn during the next two years. My goal is to get scholarships for the MFA and get grants to go to the Pratt in Venice during next summer.

Interested in entering your own artwork into one of our competitions? More information can be found here.

Daniel writes and commissions features, as well as interviewing artists. With a background in photography and painting, he’s interested in how artists make and exhibit their work. Daniel studied at the University of London, specialising in Literature, History and Art.