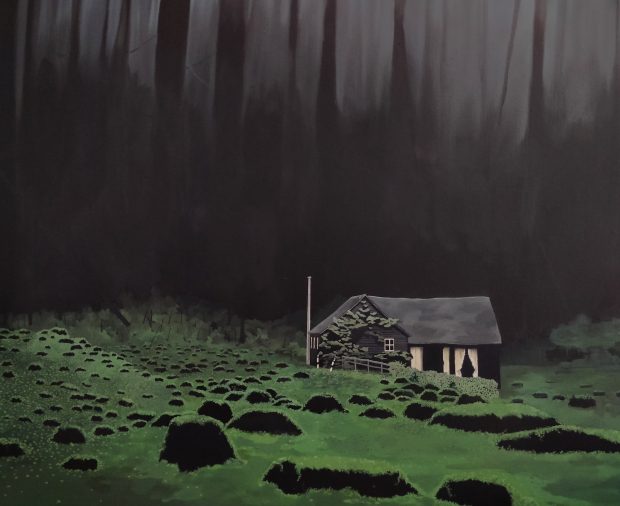 Charlotte Brisland, who won the Landscape/Seascape/Cityscape Category Award in the Jackson’s Open Painting Prize 2018, is a contemporary British painter, living and working in her home city of Portsmouth. Her large-scale Hopper-esque landscapes, which are informed by her extensive travels, are at once familiar and distant and have been exhibited in London, Japan, Europe and New York. We got in touch with Charlotte, to discover more about the road that led her to this point.

Clare: Tell us a little bit about your artistic background/education.

Charlotte: When I was two my father would take me to his school where he worked as an art teacher. I would sit in his office making little animals out of clay. I remember the sensations of moulding the stuff with my fingers and then stabbing it with the plastic tools. Drawing at home was important, I used to make my mother place a series of objects on the table for me to draw or paint. When I got to secondary school I would hide in the art room at break times, drawing for hours with the intention of making the most photorealistic observational drawings. Around that time the YBA’s rose to prominence and they were an obvious inspiration to me, broadening my understanding of what art was and could be. I took a year out before my BA and that really laid the foundation of what my real practice would eventually become. I hitch-hiked through France alone and met up with a group of French teenagers living in tipis in the mountains. The sensation of sitting beside a lonely and abandoned roadside for hours made a deep impact. I didn’t begin making landscapes until the final year of my BA because I didn’t believe that landscape painting could be contemporary. My tutor at the time was Emma Talbot, and she was the one who encouraged me to begin. My space was full of photographs I’d been making of carparks in the mountains, empty roads, abandoned and strange buildings surrounded by space etc. They’d just been sitting there for about a year and I really didn’t know how to move forward with them. Once I began though, the whole process just made itself and it was really astonishing for me because it felt like a process that was completely outside of my experience but felt so right and exciting. I’d only just started making them when the work got into the New Contemporaries and I was accepted on to the painting MA at the Royal College of Art. My experience at that time was one of bewilderment. After my MA at the RCA I won an artist in residence in Japan and remained for a while which I found strangely isolating. From there I moved to Berlin for its cultural and political landscape. I exhibited for the 48 stunden neukolln and a few smaller shows while I was there. Since returning to my home city and having children to raise I have been really focused, exhibiting pretty regularly. The work has found its way to New York, London, Salzburg and into publications such as Fresh Paint Magazine, Create, Art Maze and now, of course, winning this has been incredible. It follows the award I won for the south of England in the national open six months earlier. Getting these so close together has felt affirming. I’m not where I want to be yet, but things are moving in the right direction. 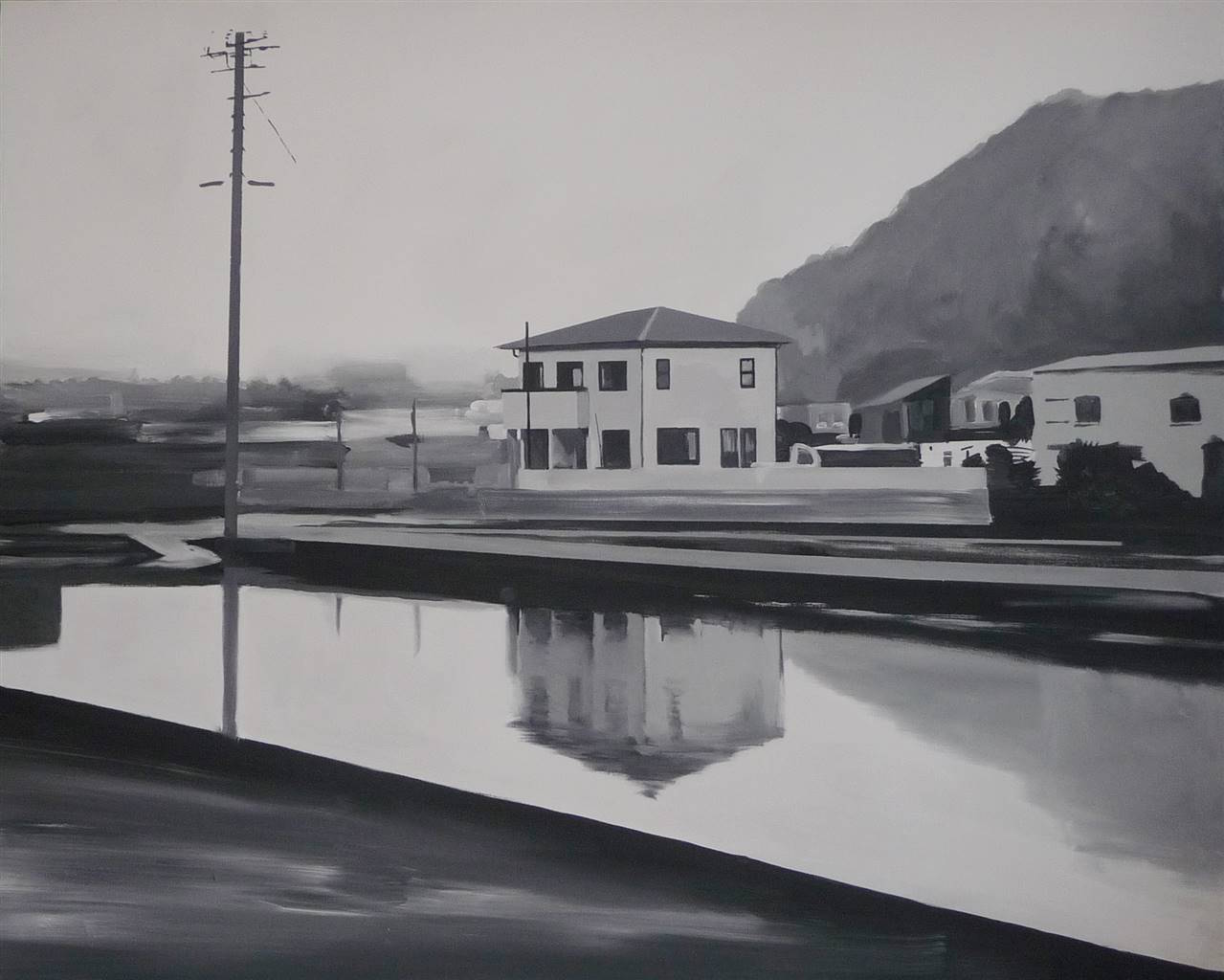 Clare: How would you describe your practice?

Charlotte: The paintings are figuratively landscape and the landscape for me is psychological. The intervened landscape is a physical manifestation of how we think and what we want. Freud’s uncanny has been something of an obsession and feeds into the paintings. Something familiar made unfamiliar. The paintings are made of sloppy, broad, gestural marks so from a distance they look realistic in some sense and up close they’re sweeps of colour and the image loses coherence. 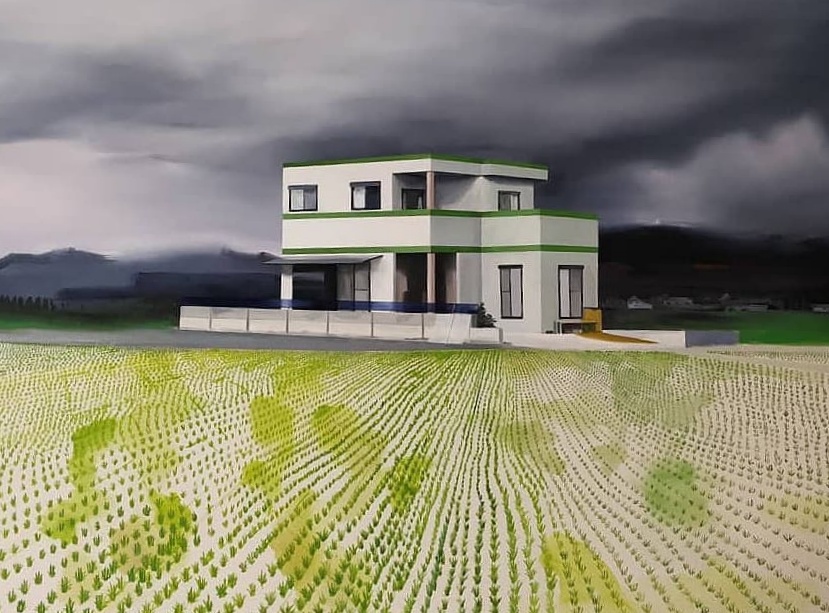 Clare: What is it about forgotten and overlooked spaces that is important to you in your work?

Charlotte: Maybe it’s important to me because I feel this way about myself? Painting is about mark making, immortalising the self. This wouldn’t be necessary if I already felt seen and understood. When I am entirely alone in an isolated space far away from familiarity, I get a strange sensation of resonance. It feels like the most important part of me I want to communicate and hopefully this resonates with other people too. 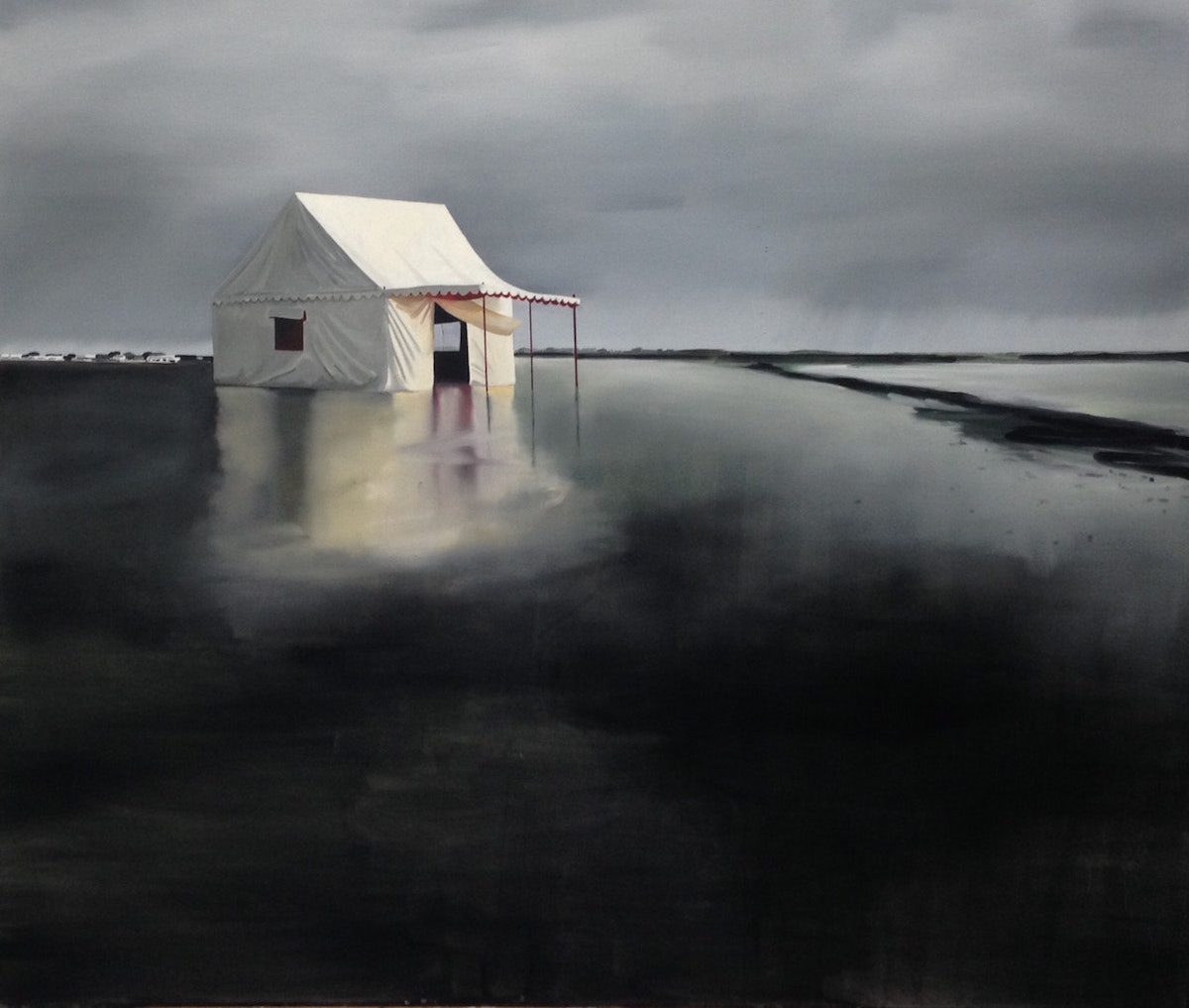 The Circus Within, 2018
Charlotte Brisland
Oil on canvas, 150 x 180 cm
Winner of the Landscape/Cityscape/Seascape Award in the Jackson’s Open Painting Prize 2018

Clare: Are the scenes in your paintings drawn directly from life or do you piece them together from places you have seen on your travels?

Charlotte: The paintings are occasionally directly from life, sometimes a composition exists in the landscape which is basically perfect for my intentions. Most of the time I collage pieces together on my laptop and then make drawings and sketches to see how they work. These can be made of parts from snapshots I’ve made all over so a sky I liked in Portsmouth collaged over a house from Japan and some fields from Germany. Most recently I’ve begun creating my own pieces of architecture to feature in the compositions. 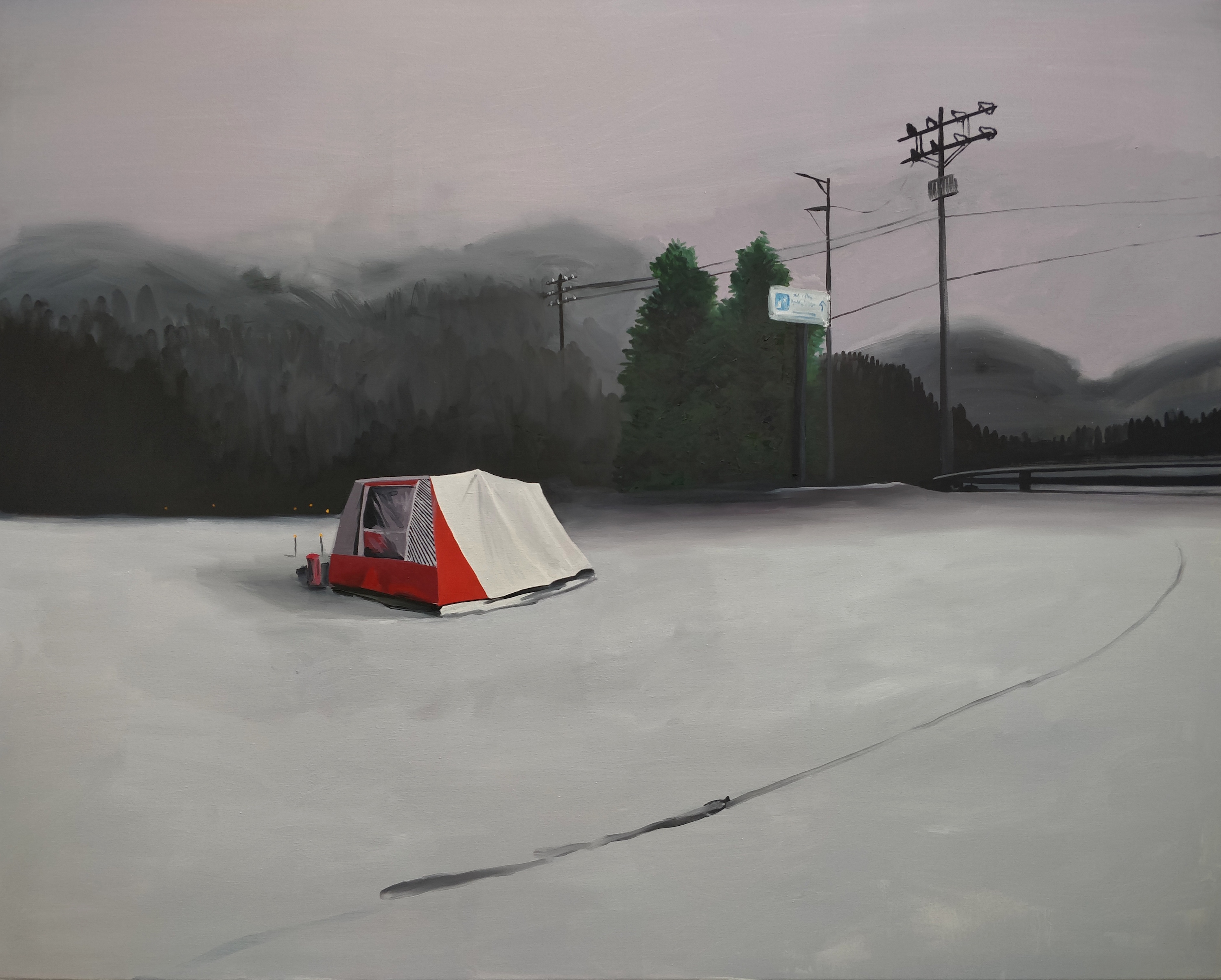 Clare: I really like the black and white paintings because they have this beautiful cinematic film noir feeling, especially the works with reflections on water. Are you a fan of the silver screen?

Charlotte: It’s never been my intention to create that, but I like how the work is perceived in this way. I love cinema and the narratives that go with film. Similarly, I like the way the paintings suggest narrative within silence. 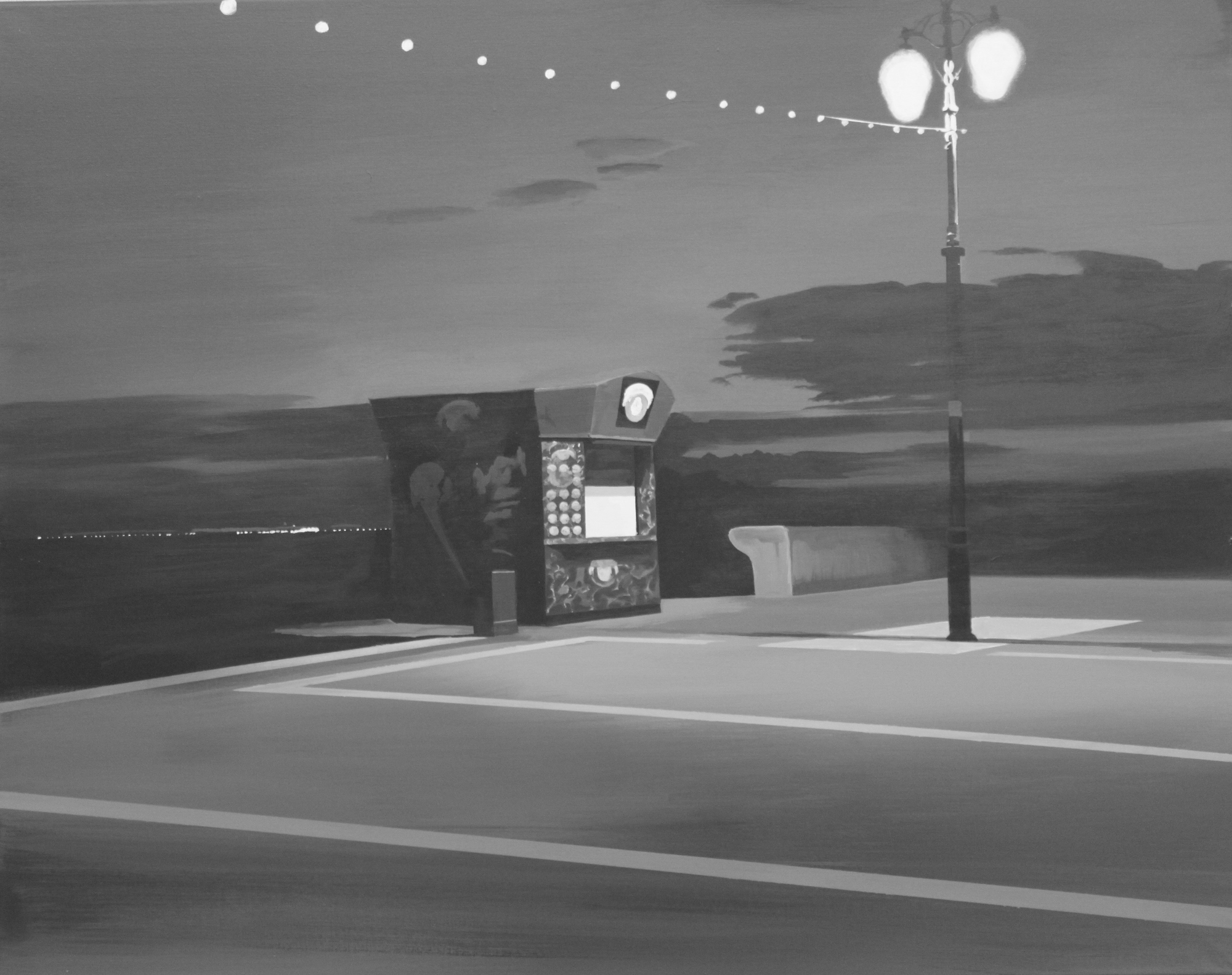 Clare: Looking through your Instagram page, which has a really lovely overall aesthetic, the sketching process appears to be a very integral part of your process. Where and when do you sketch the most?

Charlotte: It’s really interesting that you ask about this. Sketching has been something I’ve always done as a means to an end, or as a way to shut down and I never thought about it as important. I’ve recently been made drawing lecturer at the UCA which has got me researching and re-thinking drawing. It’s so close to painting, I enjoy the dialogue around where painting ends and drawing begins in the image making process. I like to be able to sketch anywhere at any time. In my twenties my sister and I used to sit in café’s a lot and sketch, I would always sketch street furniture while she would sketch the people. Now I do it on trains, at home if the children are quiet and mostly in the studio. 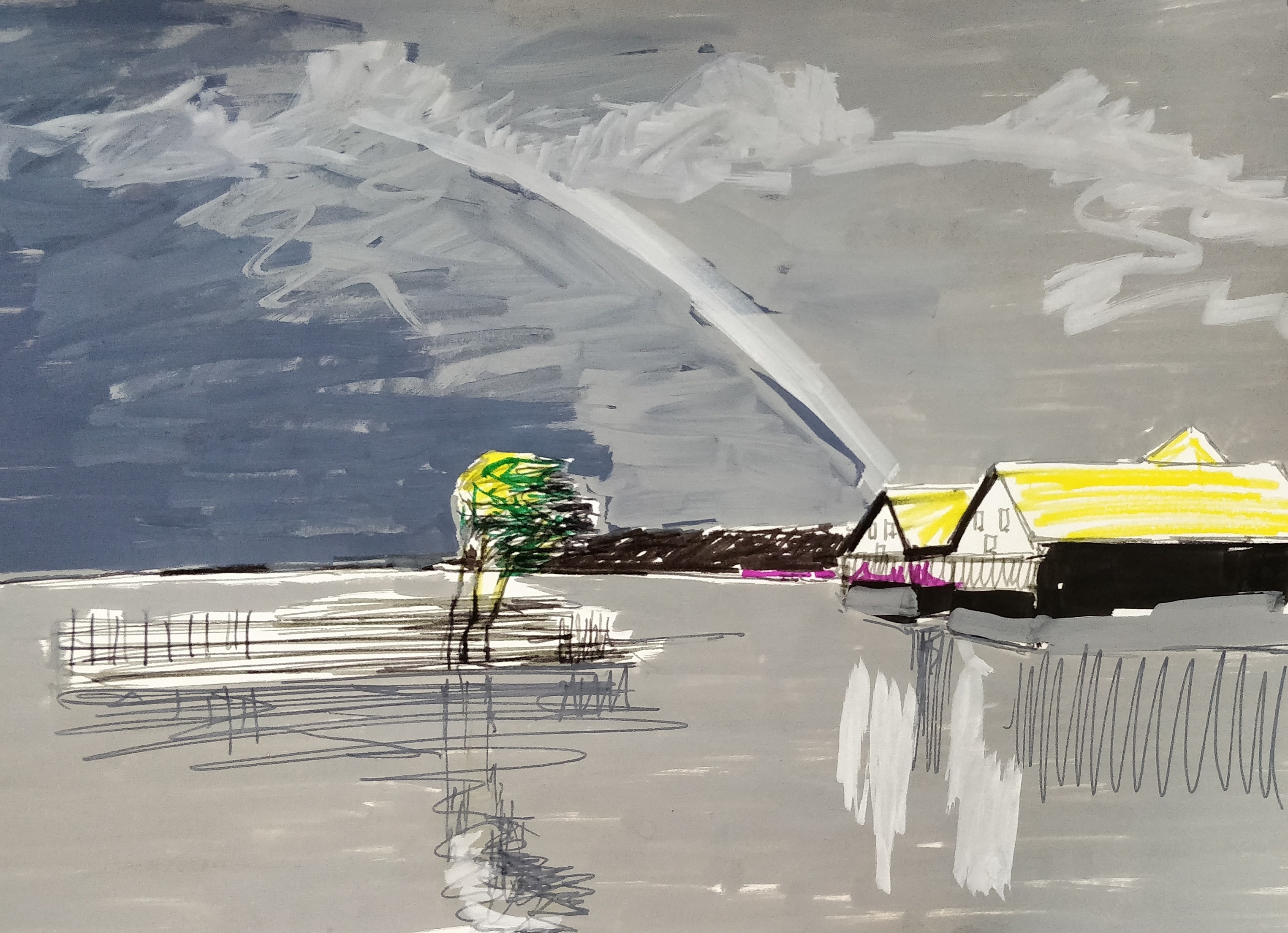 Clare: What is it about an image or idea that informs your decision to use acrylic or oil? Do you have any favourite paints, mediums, brushes or surfaces?

Charlotte: I used acrylics when the children were babies and while I was pregnant because of the fumes of oil paint thinners. It wasn’t something I wanted to do and it made the work too tight and hyperreal in my opinion. Once the children were in school and I got my own studio away from the kitchen, I got cracking on the oil again. Oil paint is wetter for longer so it’s more pliable and the pigment is usually more zingy, although that’s not always the case. I do have favourite brushes. I had a large brush I bought at the RCA when I was poor, so it was a big investment. It stayed with me through all my travels and has recently given up the ghost because I forgot to clean it one evening, it was never the same again and it has made me quite sad. I love Old Holland paints, I’d buy these all the time if I could. They have a gorgeous consistency and are packed with pigment, so the paint just sings. 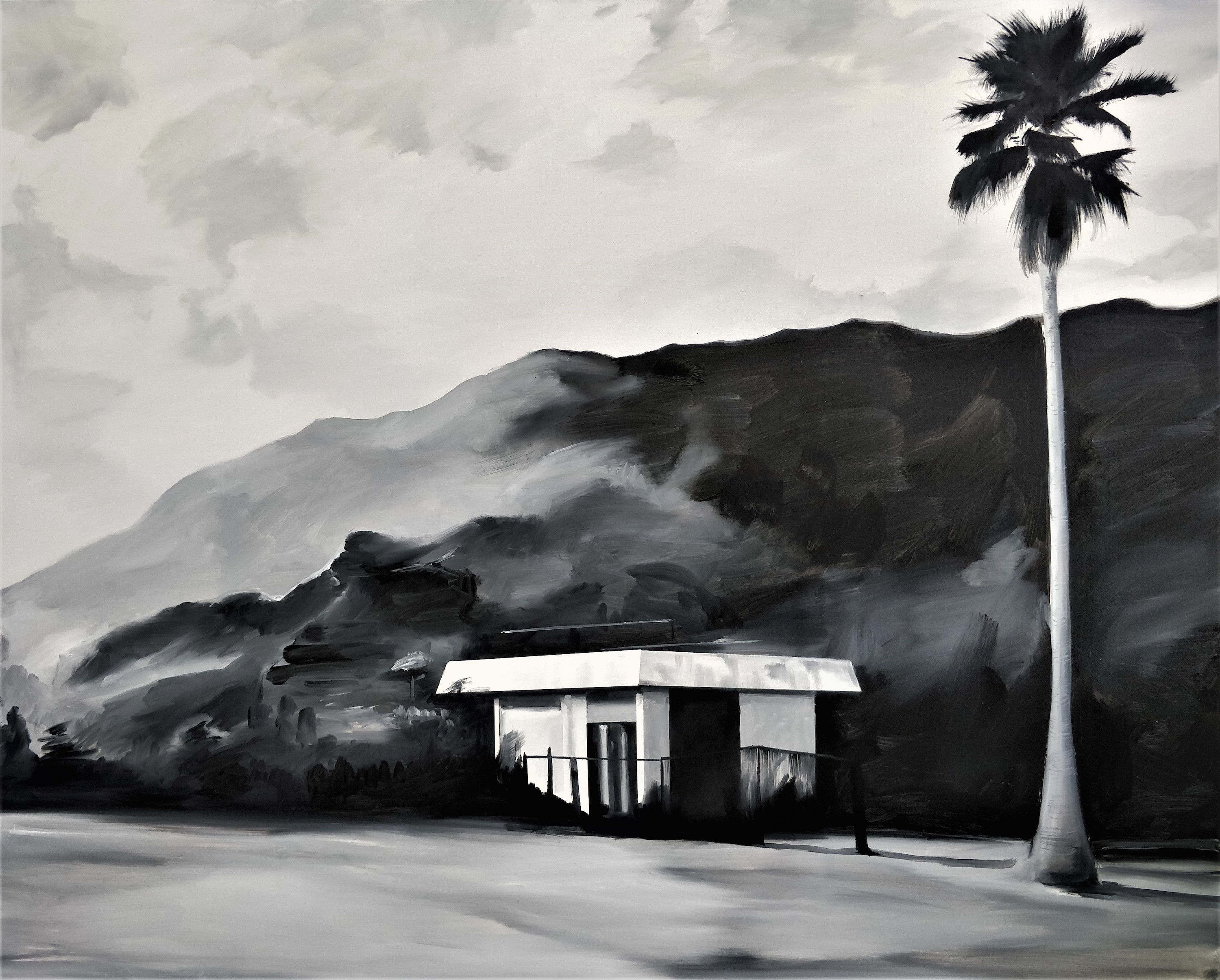 Clare: What is a good day in the studio for you?

Charlotte: A good day is one where I’m only painting and I forget time and most importantly, the painting I make is an alright one. Every so often this happens, maybe twice a year, because all the elements have to come together. When I painted ‘the circus within’ I was desperate to paint. I’d been down with the flu twice in a row and I’d lost about a month. I was still sick, but I needed to paint, and the sand just got darker and darker. Once I stood back from it, I thought then it was ok. Perhaps being sick reduced my inhibitions enough to make that work, I don’t know. 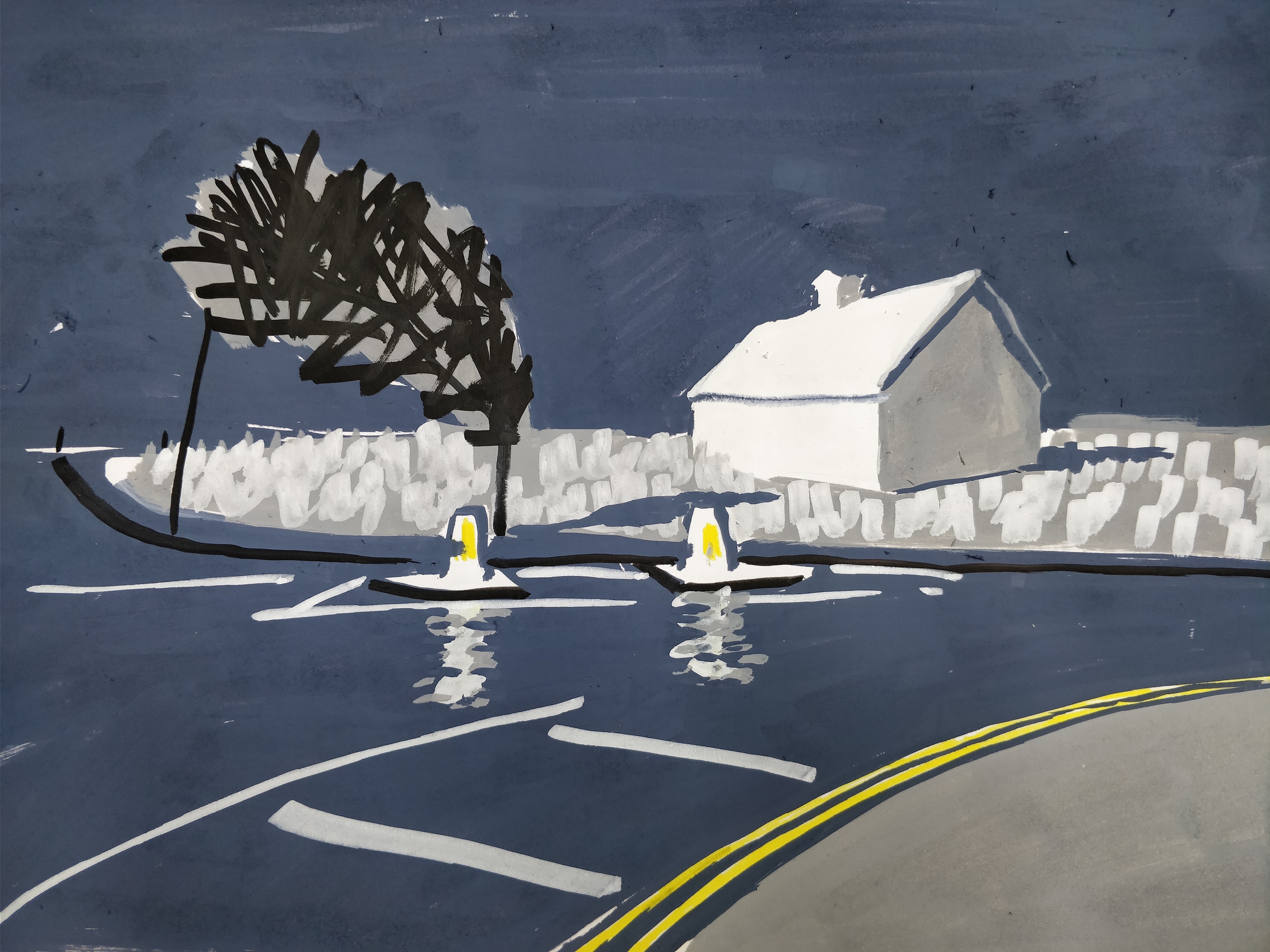 Charlotte: My influences are probably quite unexpected and unlike the work I make. I get really into the awful uncanniness of Rachel Mclean’s films. I love how she manipulates aesthetics and folklore into a world that just reeks with an extra linguistic sensation. I have sat for long stretches of time watching and re-watching them. I think she is a very powerful Artist who is in full control of her medium. Rose Wylie also blows my mind, there’s so much energy and play in her paintings. Paul McCarthy and his use of sauces on the body in space. De Chirico, Lars von trier, Jean Luc-Goddard, Goya, Michael Borremans and Caravaggio. Each of them have captivated me, perhaps because they really understand and are able to have full control over their medium and mostly because of an atmosphere they create with it. Perhaps this is not dissimilar to what I’m doing. 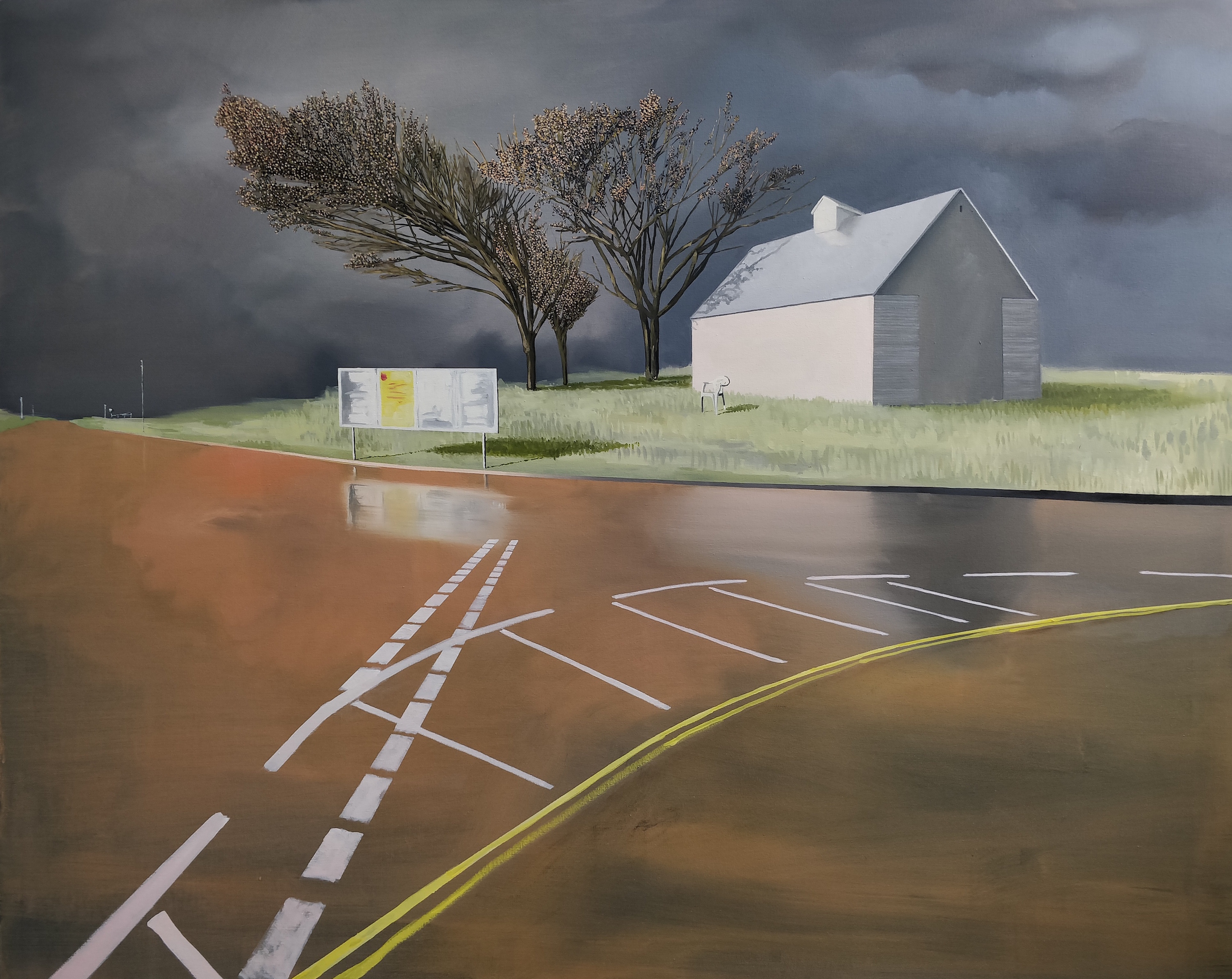 Clare: In the studio – music, audiobook, Radio 4 or silence?

Charlotte: Haha! Good question! Never silence. All the others. It’s a lot of Moderat, Max Richter, Alt J, Pilgrim and Susan Sontag at the moment. Love Radio 4, I used to listen to it all the time when I lived in Berlin for the melody of the voices. I really missed speaking English to other English speakers, so listening to this allayed my homesickness. 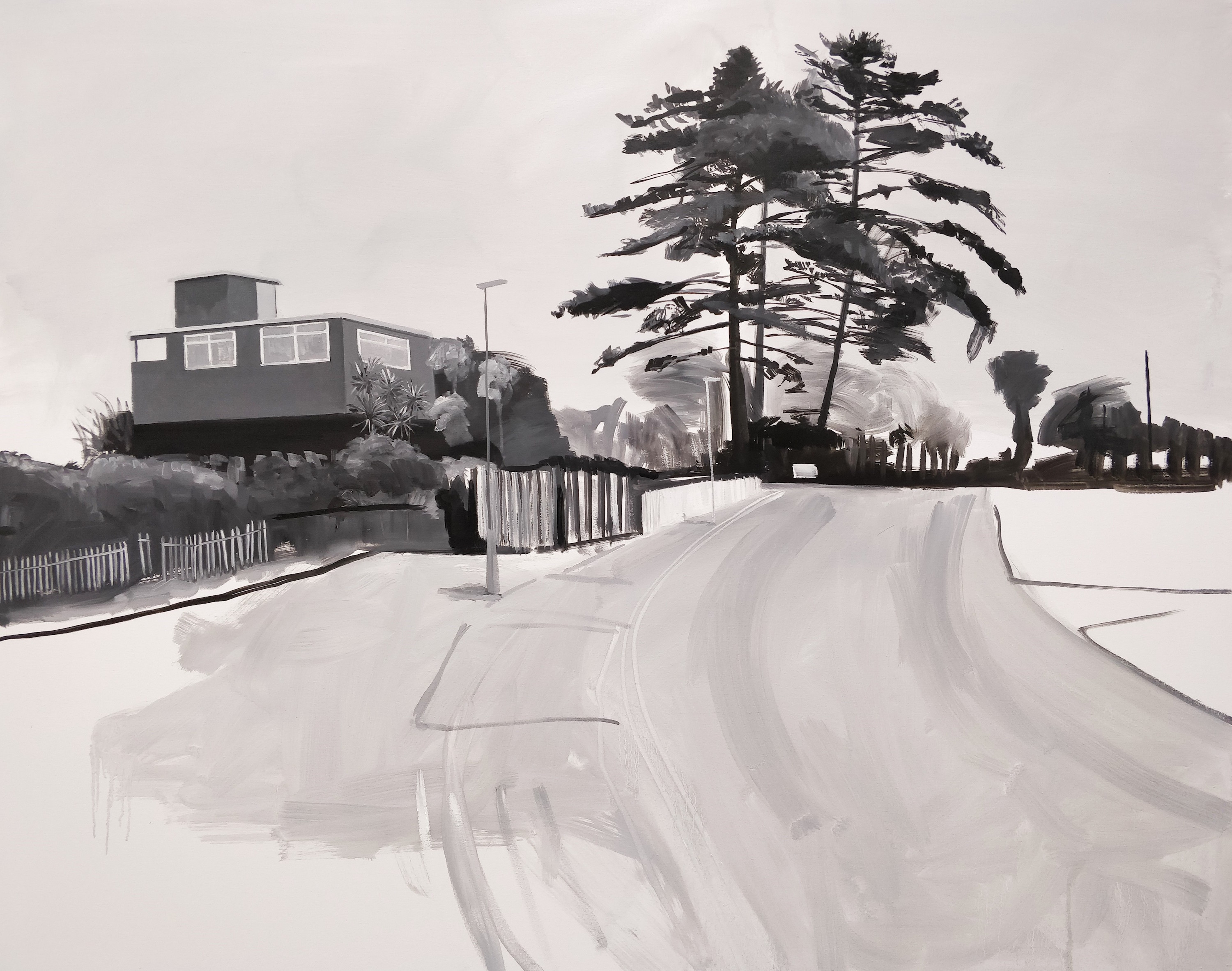 Clare: What is coming up next for you and where can we see more of your art in the flesh or online?

Charlotte: I’m in the process of updating my website, teaching and curating a group exhibition. I’m also drawing a lot for a new series of paintings. The exhibition is called ‘Heimweh’ which means ‘homesickness’ and draws on the reflections of Freud about the uncanny or ‘Unheimlich’. There are eight female artists involved who all make really strong and diverse work around the sense of place. The exhibition will open on Friday 5th April at Artspace Portsmouth. Please do come along. 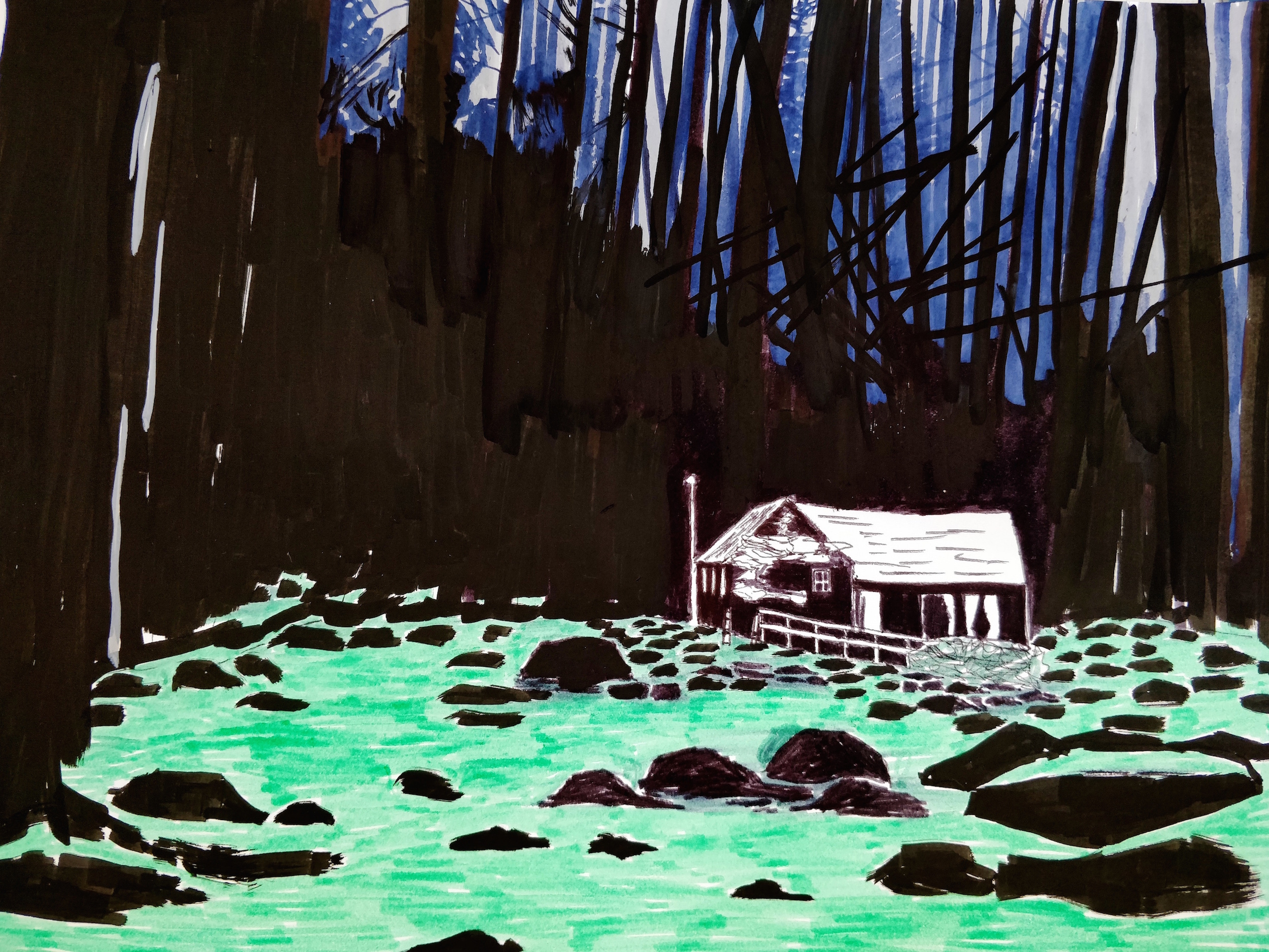 Email charlotte.brisland@outlook.com and visit her website for more information.

Clare co-ordinates Jackson's Blog as well as the annual Jackson's Painting Prize. She contributes regularly to the blog with features, reviews and interviews. With a background in fine arts, her practices are illustration, graphic design, video and music.