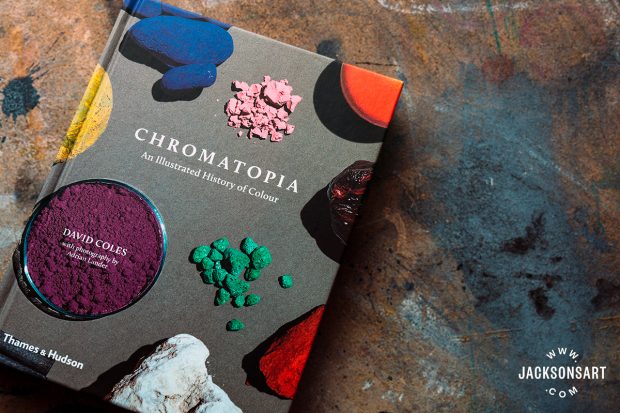 Chromatopia: An Illustrated History of Colour

David Coles, founder of Langridge Artist Colours, published a book early in 2019 that explains the history of colour and pigment use. Complete with pigment making recipes, the etymology of colour names and examples of colours in use, it is a comprehensive guide to colour and a visually stimulating read. We had a detailed look at it to explain why it’s worth taking a look at Chromatopia. 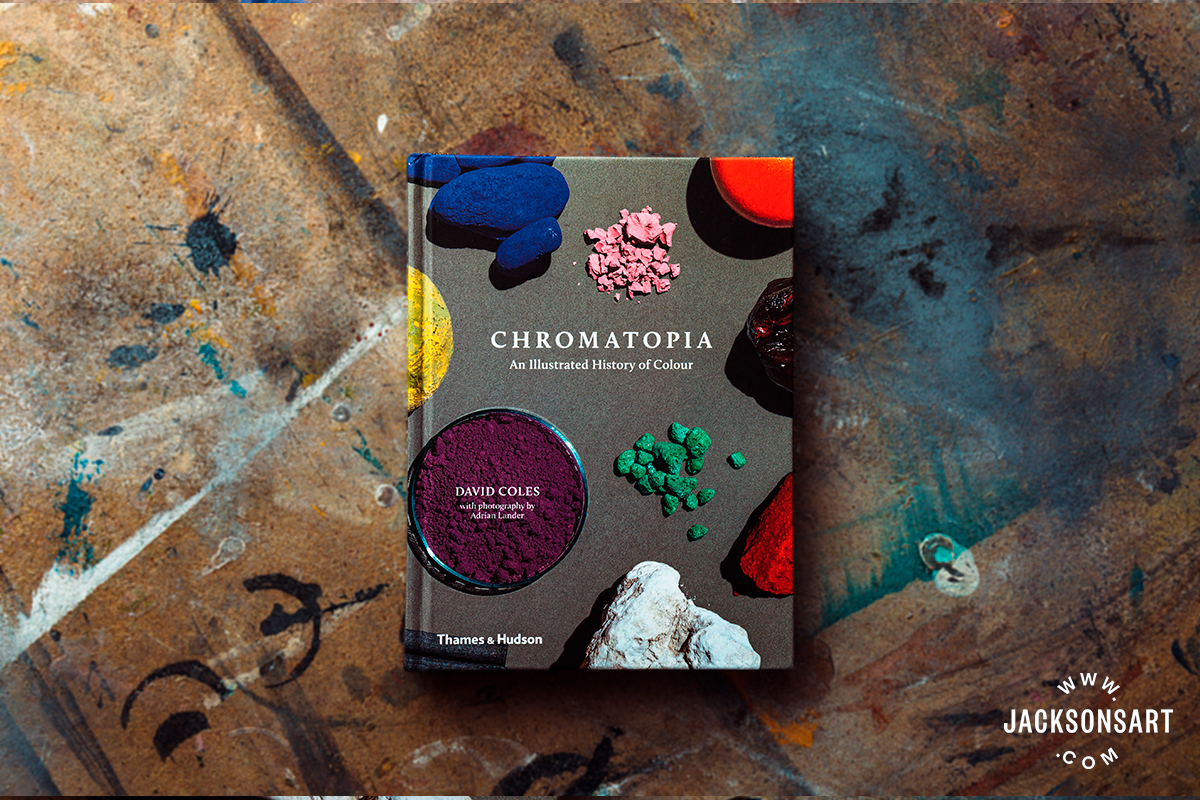 Chromatopia: An Illustrated History of Colour, initially appears to be a cross between a photography coffee-table book and a very visual cookery book. All the images are deliciously textural and the writing is enjoyably descriptive and sensual while providing in-depth information on the most popular pigments through the ages. For each pigment, David Coles explains how it was made, where it came from, its cultural and artistic significance and why it has the name it does.

The History of Pigments:

One of my favourite pieces of information, while reading about the history of pigments, was about Peach Black—who knew that a pigment could save lives?

Peach Black is an impure carbon black derived from the shells and kernels of fruit and has been used since the Middle Ages. It is opaque and produces a deep blue-black colour, recommended for watercolours. Because it is time-consuming to produce, it has mainly fallen out of production, however during World War I, when Germany started using deadly chlorine gas against allied troops, an American found filling gas masks with this pigment could save lives. The Red Cross then arranged the collection of millions of peach stones in order to save lives using the pigment. 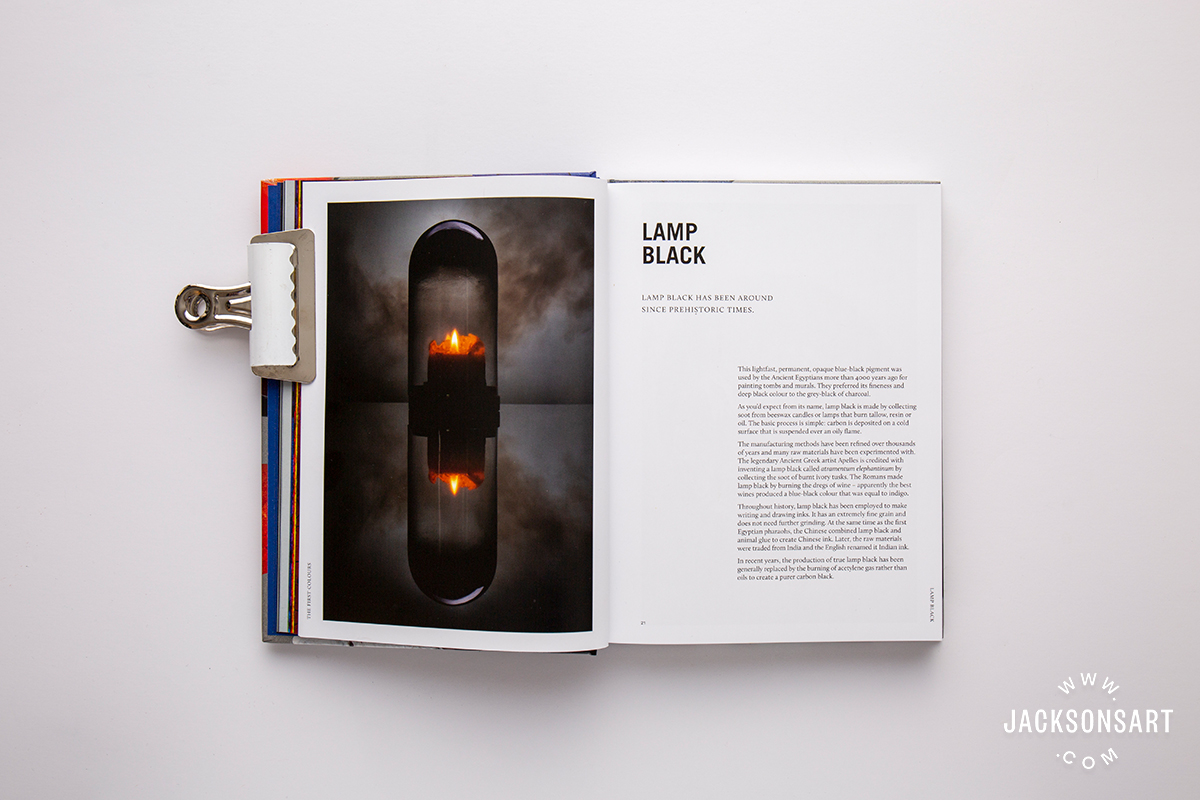 The book opens with the tale of how David Coles found his path to becoming a colour maker, followed by a glossary that sets you up with key terms you’ll need to understand (very helpful to anyone discovering the intricacies of colour making). This introduction is then cemented by an overall history of the six most basic key colours.

For instance, when reading the history of orange you’ll discover that:

‘Orange wasn’t always called orange. In fact, the word we now use for the colour comes from the fruit that was introduced to Europe from Asia by Portuguese merchants in the late 15th century. Before that, the colour was referred to either as a hue of red or yellow. In Old English, it was geoluhread, which means ‘yellow-red’. The modern term, derived from the Sanskrit naranga, wasn’t used to describe the colour until the middle of the 16th century.’ 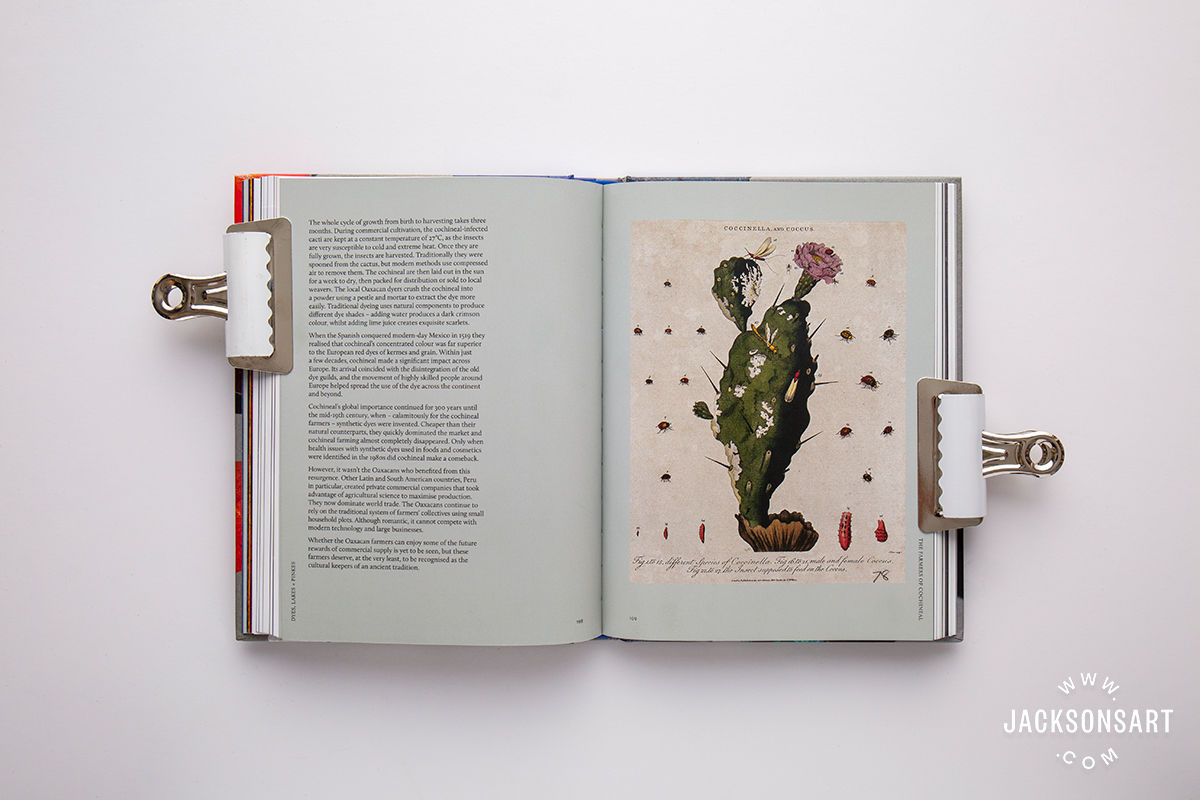 The Farmers of Cochineal history in the ‘Dyes, Lakes + Pinkes’ chapter

After that, the text moves seamlessly and chronologically from the first pigments used by humans in art, such as bone white, to those used in Medieval times, like Dragon’s Blood, through to those that have only been possible with modern technology such as Vantablack. This gives a sense of the expanse and changing nature of the palettes that have been available to people throughout time and how lucky we are to have the widest range in this current day and age.

In particular, the following facts you may find fascinating:

Oaxacan Farmers are the cultural keepers of the ancient tradition of cochineal farming:

Cochineal is made from the carmine acid produced by female cochineal insects to deter other predator insects. It has been used in the Americas for dyeing textiles since 700 BCE. And the vivid scarlet was treasured by the Incas and the Aztecs. In Chromatopia there is a full myth about how cochineals were created, that I won’t ruin by paraphrasing.

It contributed to colonisation as it was one of the most sought after exports from the Americas, apart from gold and silver.

It nearly went out of production in the 19th century, due to synthetic dyes, however, due to the new trend for “natural” colourings, it is being used in many consumables such as liquors similar to Campari.

The methods of growing and harvesting cochineal have barely changed since the days of the Aztecs and ‘Even today, the only crop in Latin America that can compete with cochineal in price is cocaine.’ 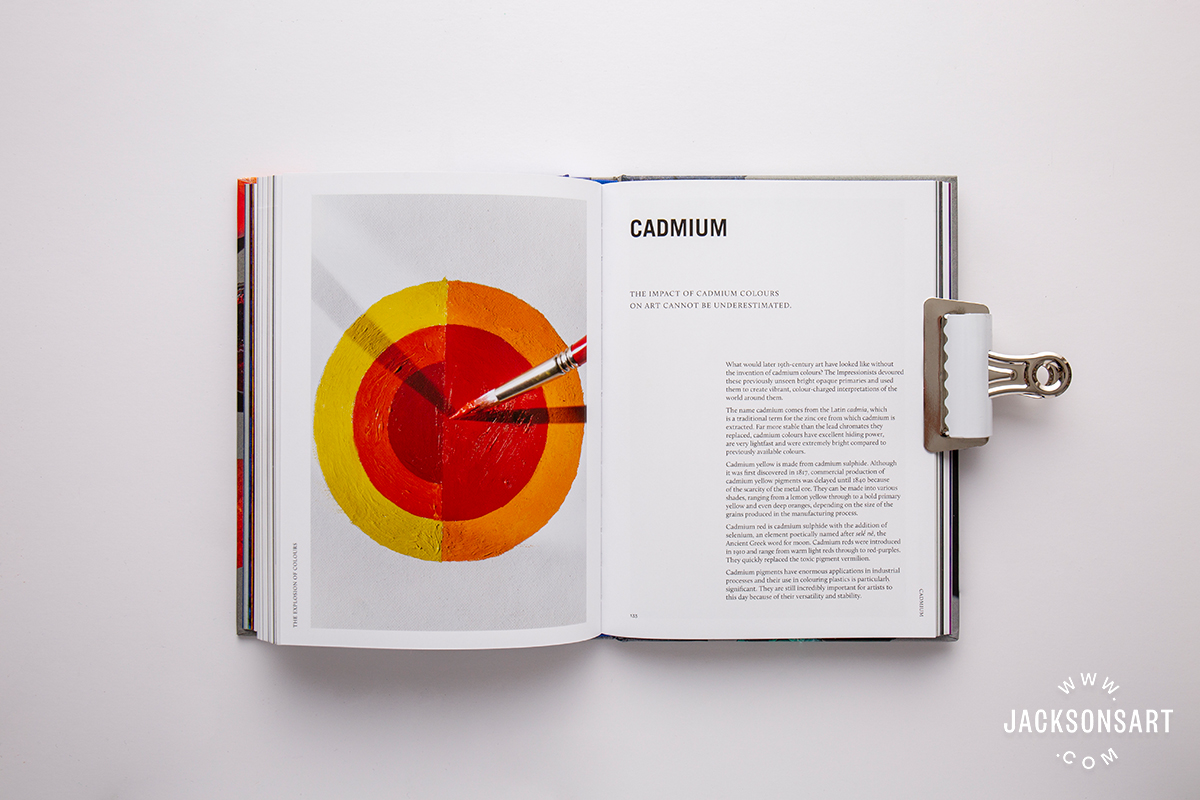 Cadmium pigment history page in ‘The Explosion of Colours’ chapter

In comparison, fairly modern pigments are also discussed, especially in relation to art history and the effects they had on the course of painting forever.

The Introduction of Cadmium Colours:

‘The name cadmium comes from the Latin cadmia, which is a traditional name for the zinc ore from which cadmium is extracted. Far more stable than the lead chromates they replaced, cadmium colours have excellent hiding power, are very lightfast and were extremely bright compared to previously available colours.’

‘What would later 19th-century art have looked like without the invention of cadmium colours? The Impressionists devoured these previously unseen bright opaque primaries and used them to create vibrant, colour-charged interpretations of the world around them.’ 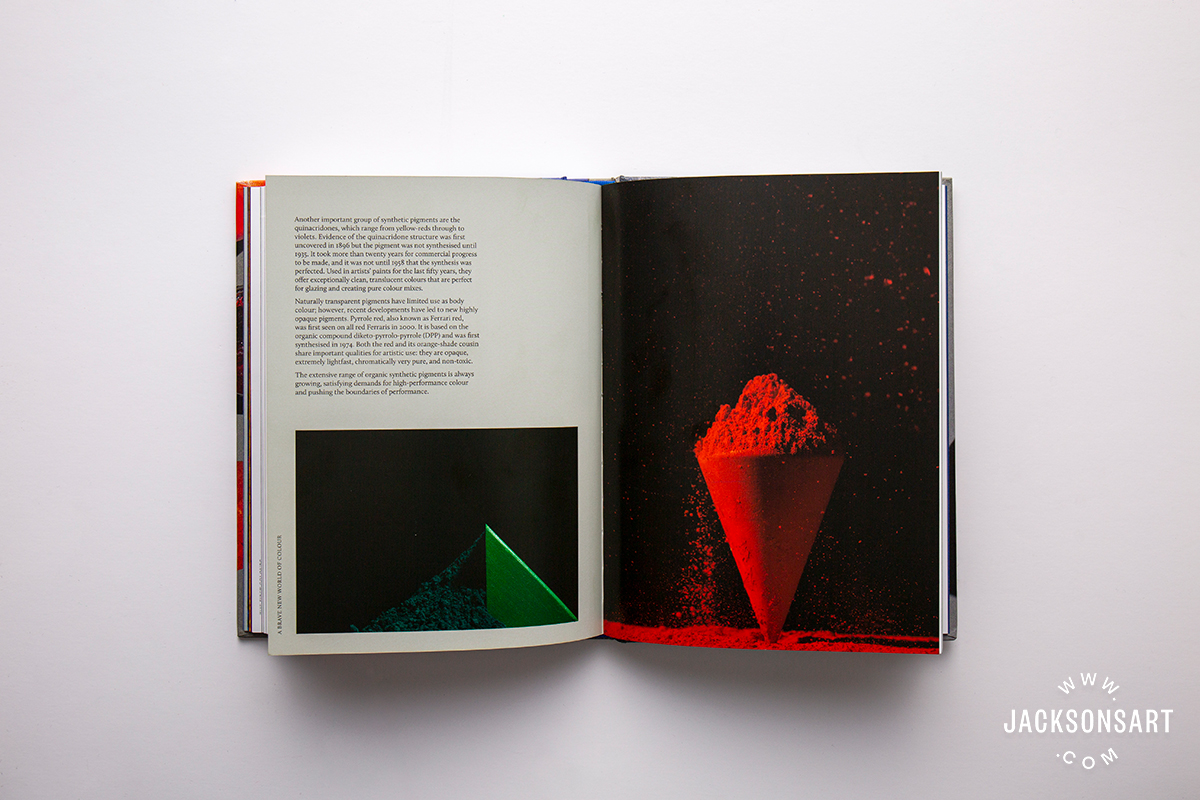 An investigation into the chemical construction of textile dyes during the industrial revolution led to a rapid expansion of colour ranges.

The first synthetic organic pigment was tartrazine yellow, which was patented in 1884. It was made from ago yellow dye and is still in use as an artists’ pigment. A vast range of new azo dyes and pigments were introduced, these ranged from a clean bright yellow to lemons and warm oranges.

Many of these synthetic colours chemical names are replaced with trade names such as Monastral or Hansa, or performance-describing names like ‘permanent’. They are often described by their colour equivalence to more traditional pigments. For example, cadmium yellow ‘hue’ is actually made with azo yellow pigment. 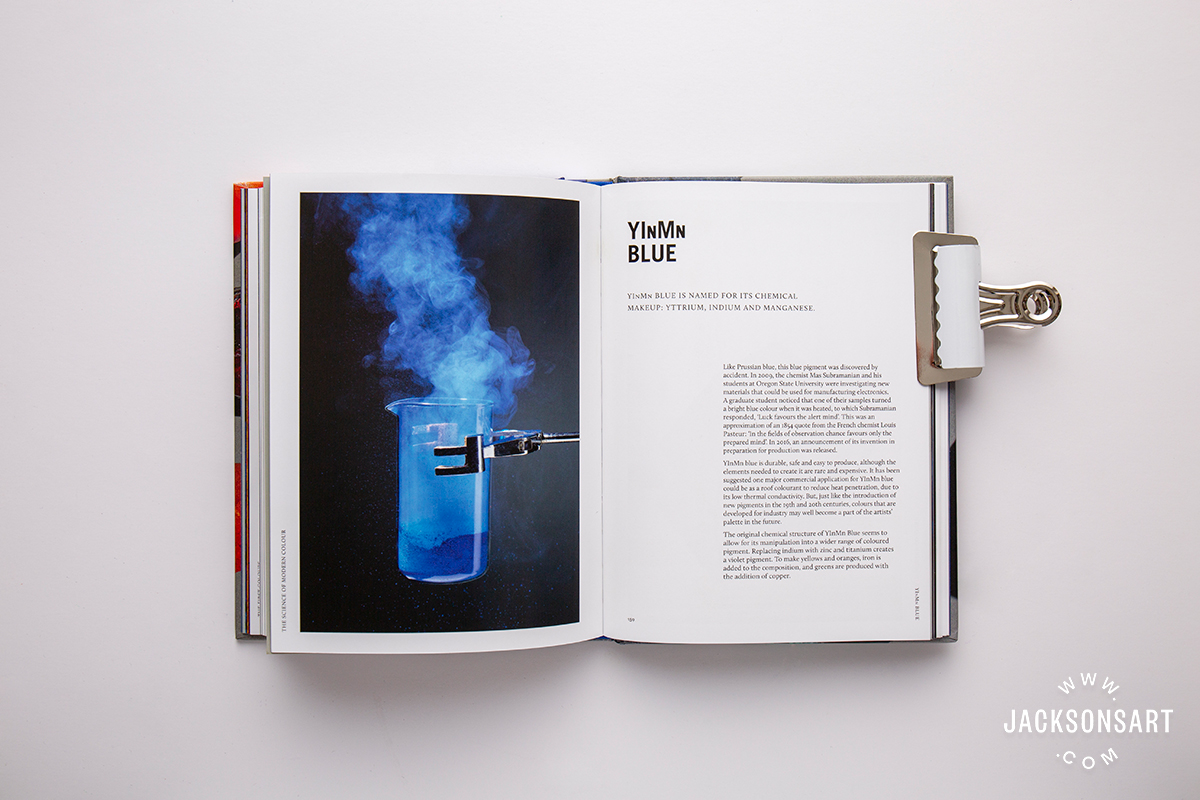 Chromatopia also includes practical recipes on how to create your own pigments so you can start experimenting, including recipes for Lead White, Carmine Lake, Ultramarine (the amount of Lapis Lazuli you need may be impractical for most home paintmakers) and Madder Lake. Each recipe is only a page long and very easy to follow, with an appealing photograph beside it. 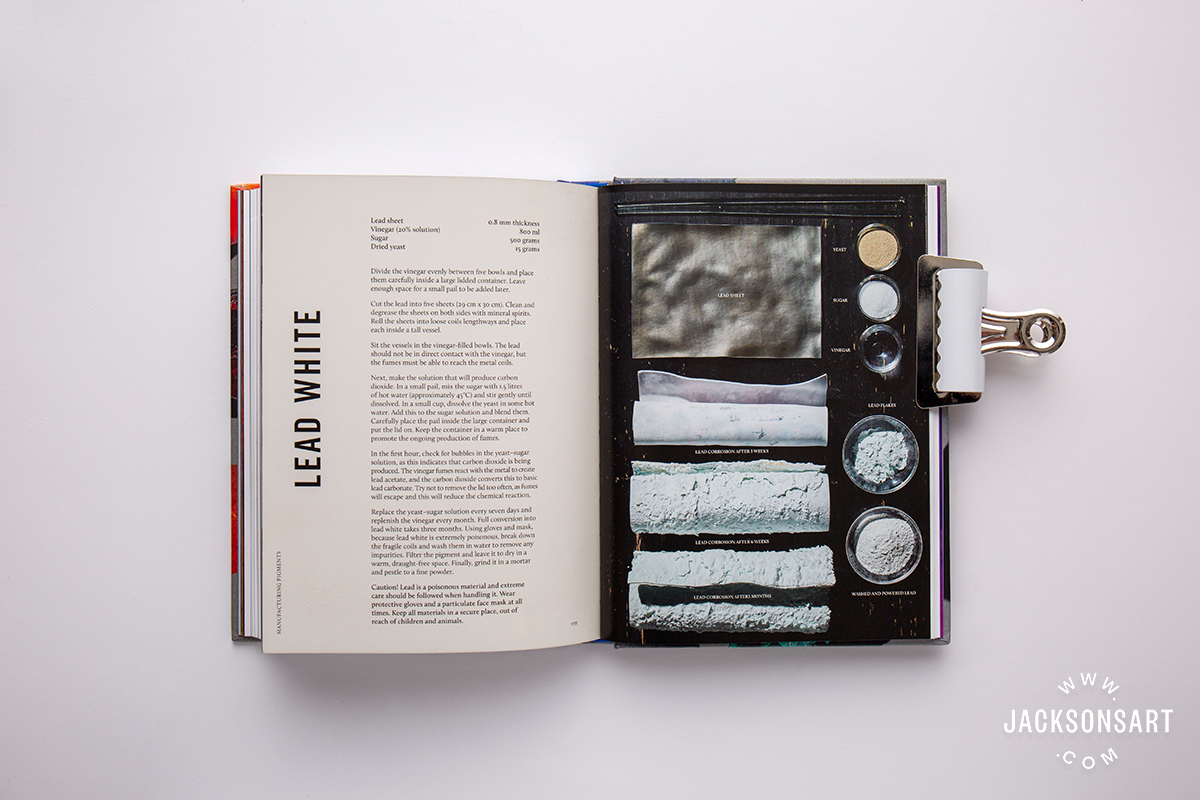 Lead White, for instance, is a simple example that can be made over 3 months with nearly all household ingredients.

There are only six steps to it and the different stages of corrosion are illustrated in the photograph so you can check how it’s going.

It also has a helpful hazard warning. It’s extra helpful to consider that the transportation and trade of Lead White is restricted in the EU so it would may be an idea to create your own Lead White paint instead. 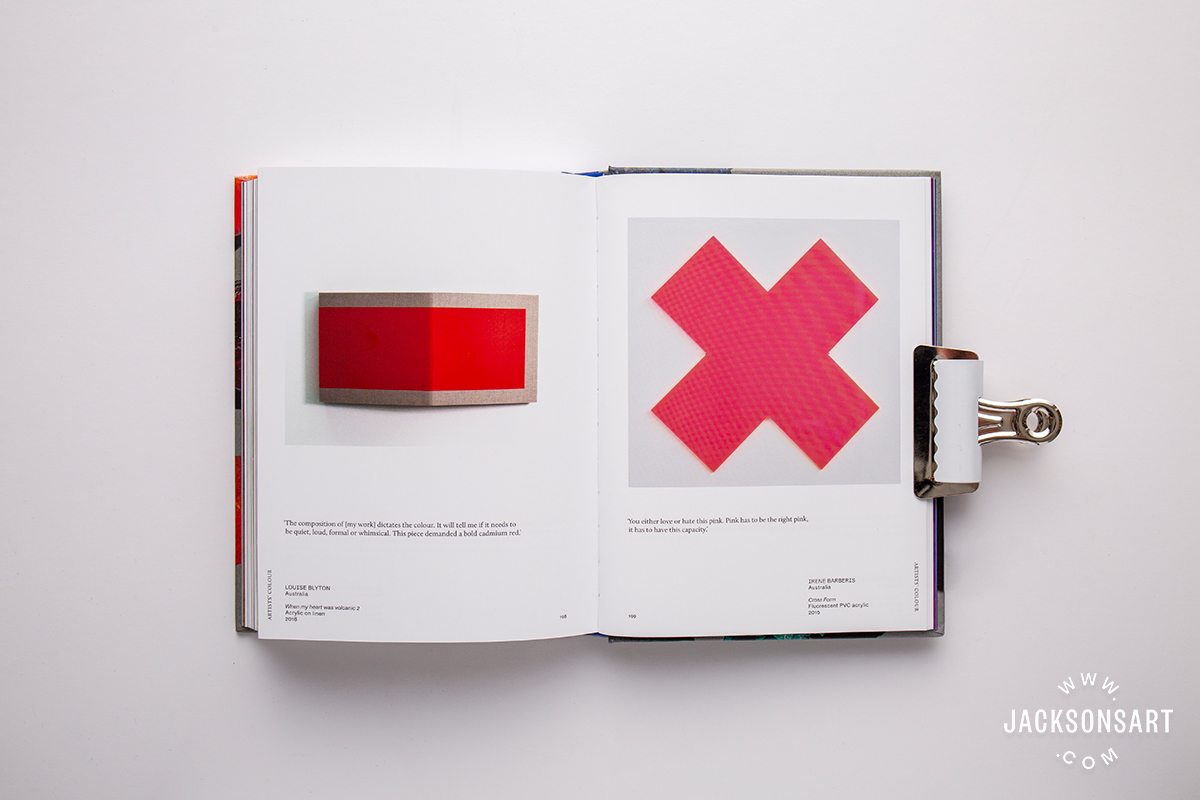 The last part of the book ‘Artist’s colours’ shows an inspiring variety of contemporary artworks that explore and celebrate colour to demonstrate how colour can be applied.

A reservation I would have is that I expected an index after this section and was disappointed that there wasn’t one as I think it would be helpful.

As a painter, it can also help you understand the properties of the paint you’re using as well as how pigments affect colours that have the same name. Chromatopia is bound to draw you into the intricate details of each colour it describes, make you lust after bygone colours and have you sharing colour trivia to everyone you can.

If you’d like to read more Chromatopia is available on jacksonsart.com, here.

If David Coles’ knowledge has inspired you, you can view his range of Artist Oil Colours, here.

Find out more about Langridge by visiting their website here.

Do you have a favourite art material? "The most im

Holbein is one of the world’s most respected mak

Our Paper Guide consists of over 122 pages about t