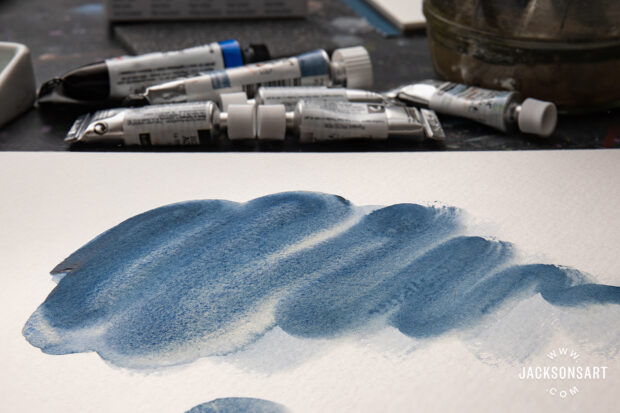 Granulation in Watercolours: What is it and How to use it?

Granulation in watercolours is where un-even pigment becomes visible on the page, it is often used by watercolourists to add texture. Watercolourist Anna Zadorozhnaya explains what causes granulation, how to increase it, what it can be used for and how to use a spray to create a similar effect with non-granulating colours. 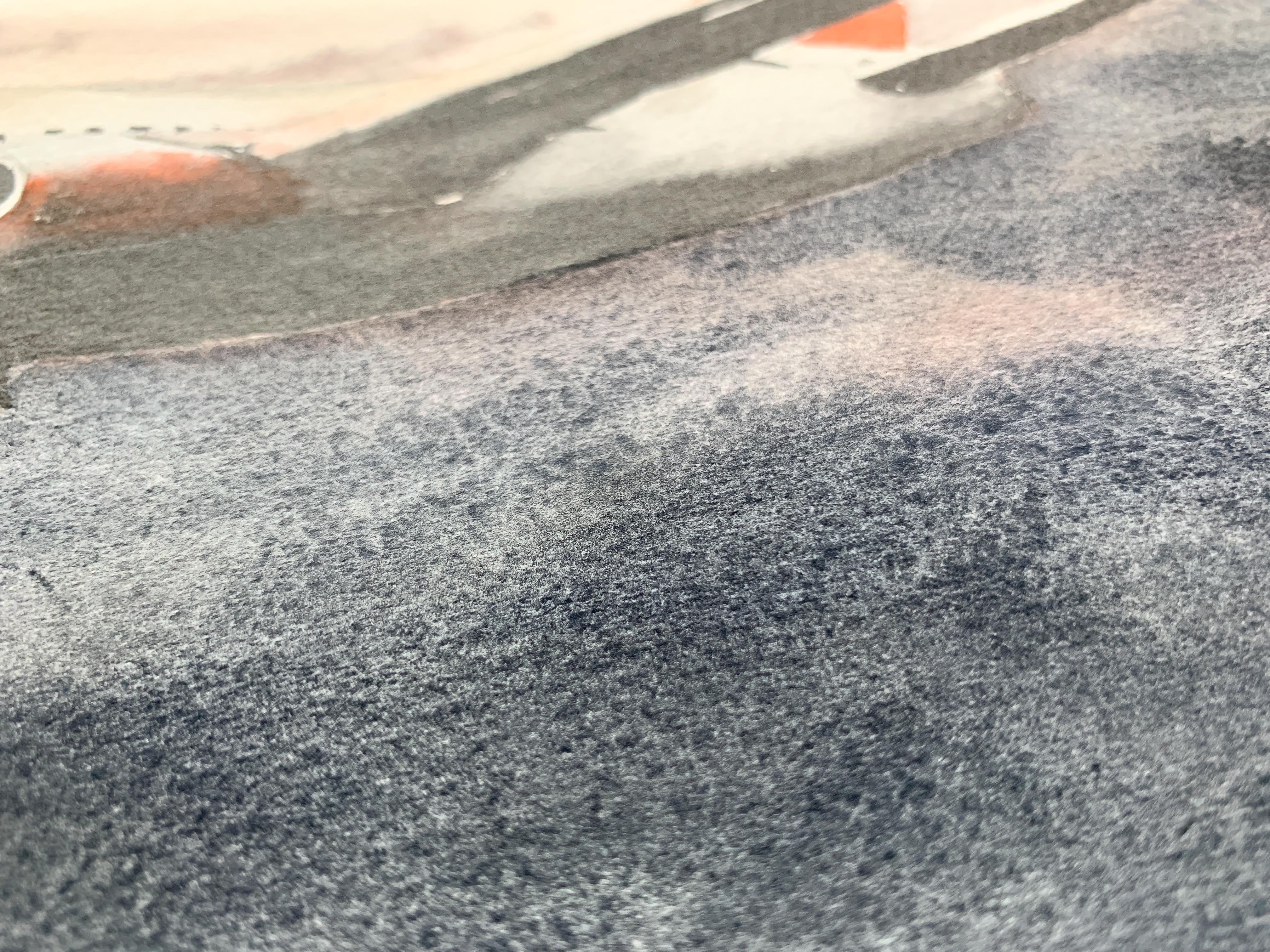 The Effect of Granulation in Watercolours

There is always a lot of discussion around granulation in watercolour: all watercolour artists know that some colours have a greater tendency to naturally granulate than others. But not all of them know what causes granulation and how it can be used in paintings.

Granulation is the visibly clear appearance of pigment particles in an uneven texture on the paper. Sounds complicated? Simply put, the nature of this phenomenon lies in the name itself: according to the dictionary, granulation is the formation of grains of a substance. In the case of watercolours, this substance is a pigment, and certain pigments tend to granulate, i.e. to form small dots and/or groups of flakes that are visually noticeable on paper. 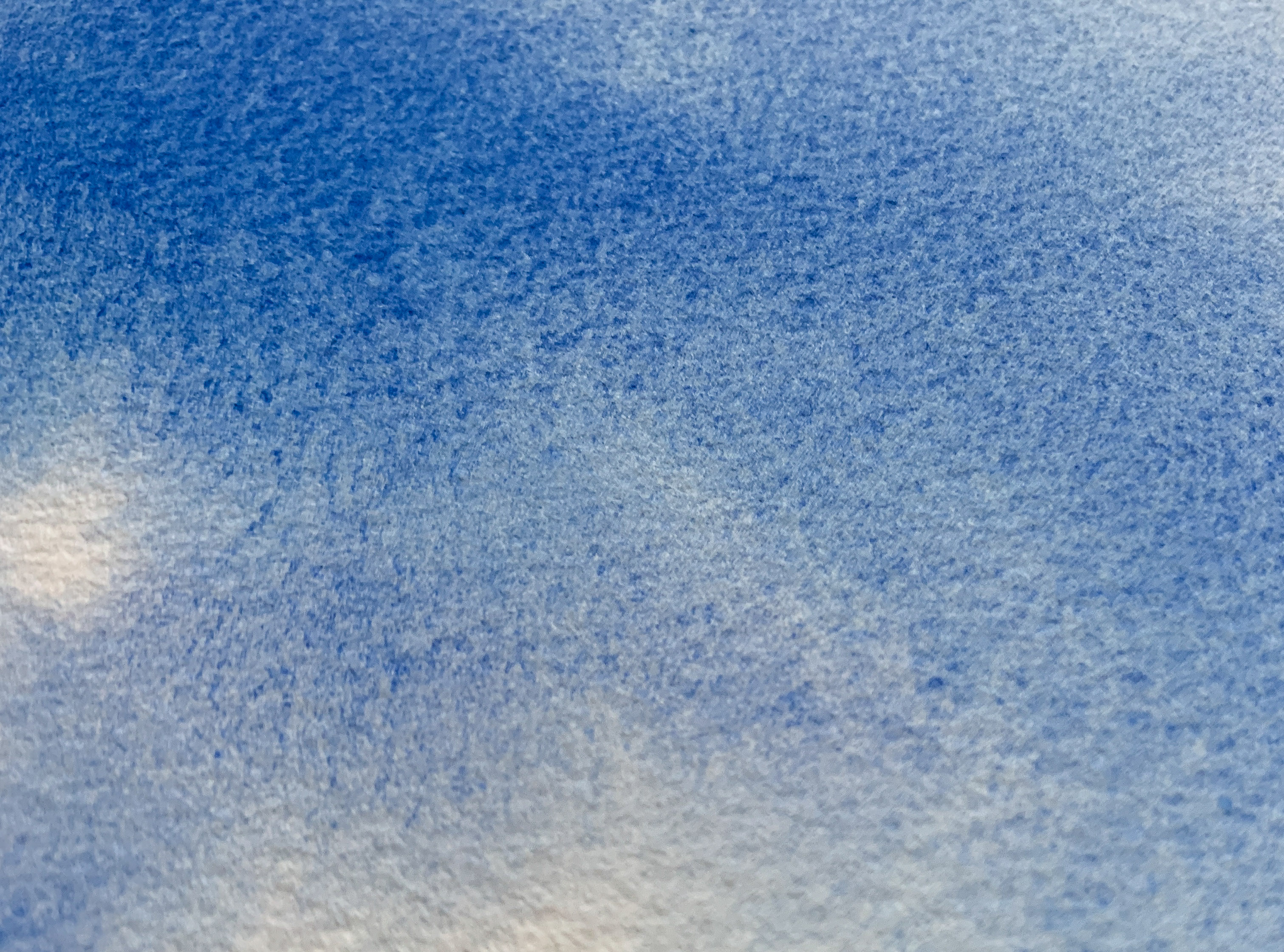 An example of Ultramarine watercolour granulating

Before explaining the causes and specific applications of granulation in watercolour paintings, it is worth explaining the term “flocculation” which is associated with granulation. There is much debate among watercolourists about whether the two processes are actually different.

One theory, supported by chemists, states that granulation is the appearance of visible particles of pigment on paper due to the uneven depositing of the sediment, whereas flocculation is the mutual attraction of small particles of pigment into groups that creates patterns on the paper. This would make the two fundamentally different because of the process that causes them.

According to another theory, which also has many supporters, flocculation is a subspecies of granulation, just one of its variants. Anyway, there are those who say that it is not important because the main thing is not what this process is called, but that applying certain paints to paper creates a granulated texture. 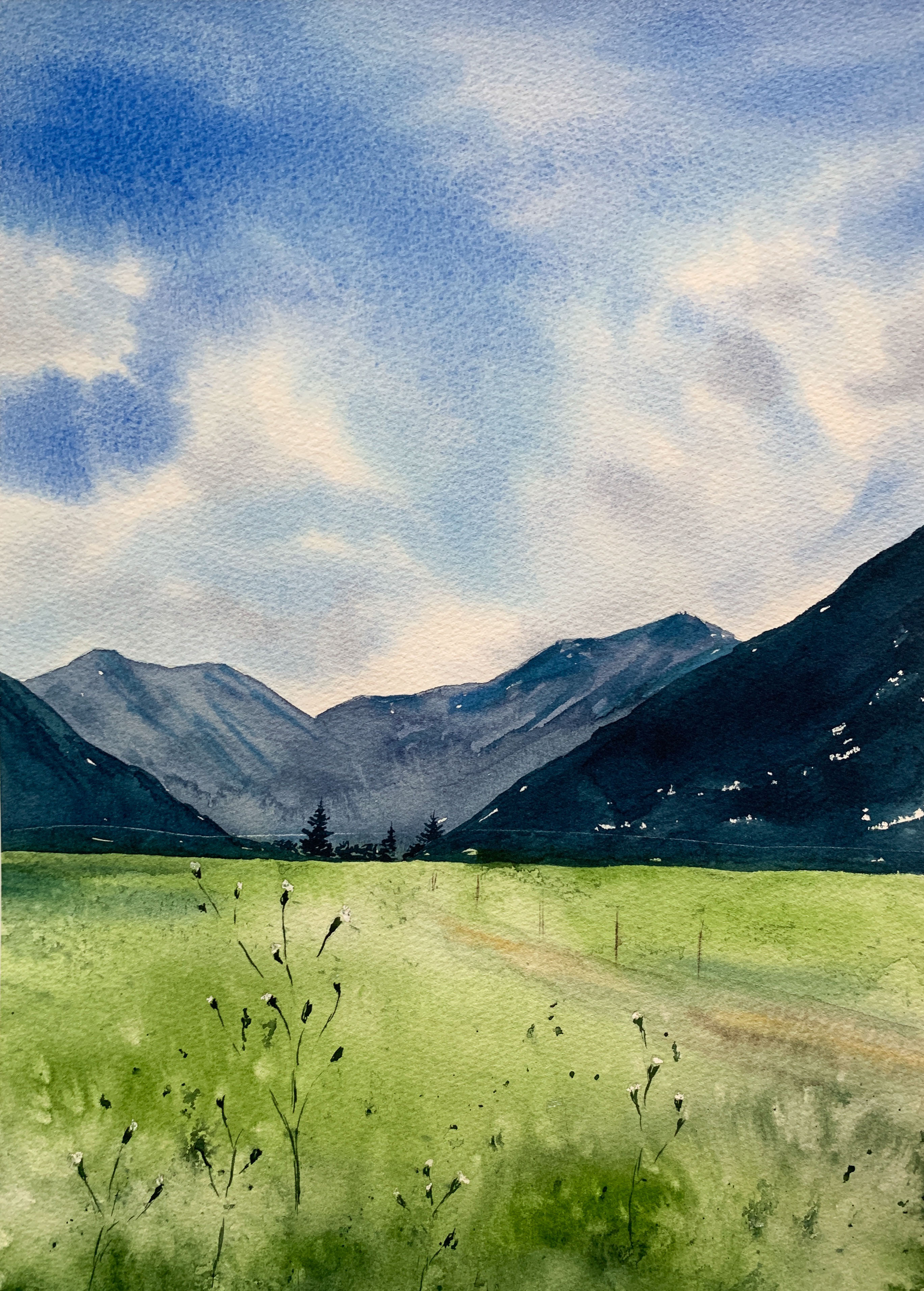 What causes granulation in watercolours?

There are three important factors.

— The nature of the pigment

The most important factor in the formation of granulation in watercolour is the paint’s pigment. There are groups of pigments that have a natural tendency to granulate because they are heavier.

These are:
Ultramarines
Cobalts (including ceruleans)
Earth tones
Blacks

[Editor’s note: Most earth pigments are now made with synthetic rather than natural pigments. Synthetic iron oxides, like Raw Sienna and Burnt Umber, granulate differently between brands with some granulating heavily and others hardly granulating at all. Many genuine mineral pigments produce dramatic granulating effects due to their larger pigment particle size.

Of the black pigments, Ivory Black and Mars Black usually granulate. Lamp Black generally does not. 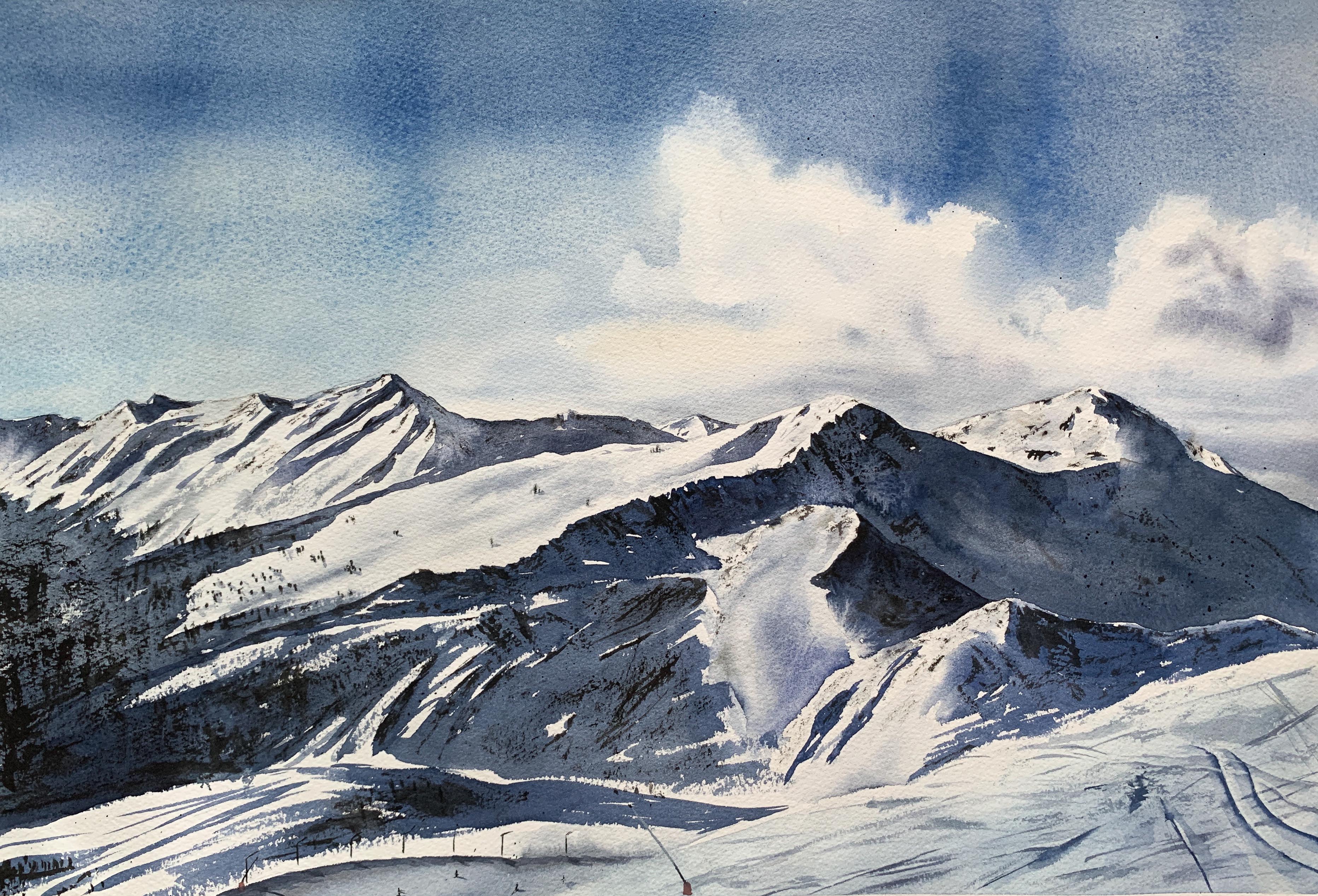 Granulation being used in a mountain Landscape for interest, texture and tone

— Quantity and quality of water

As a rule, granulation is more visible and clear when there is a lot of water both on the paper and mixed with the paint itself. So if you would like to increase granulation, use more water.

Also, one of the factors in creating granulation is the quality of the water you use. If you use hard water, which has more minerals in it, the granulation will be more pronounced than if you used distilled or soft water. 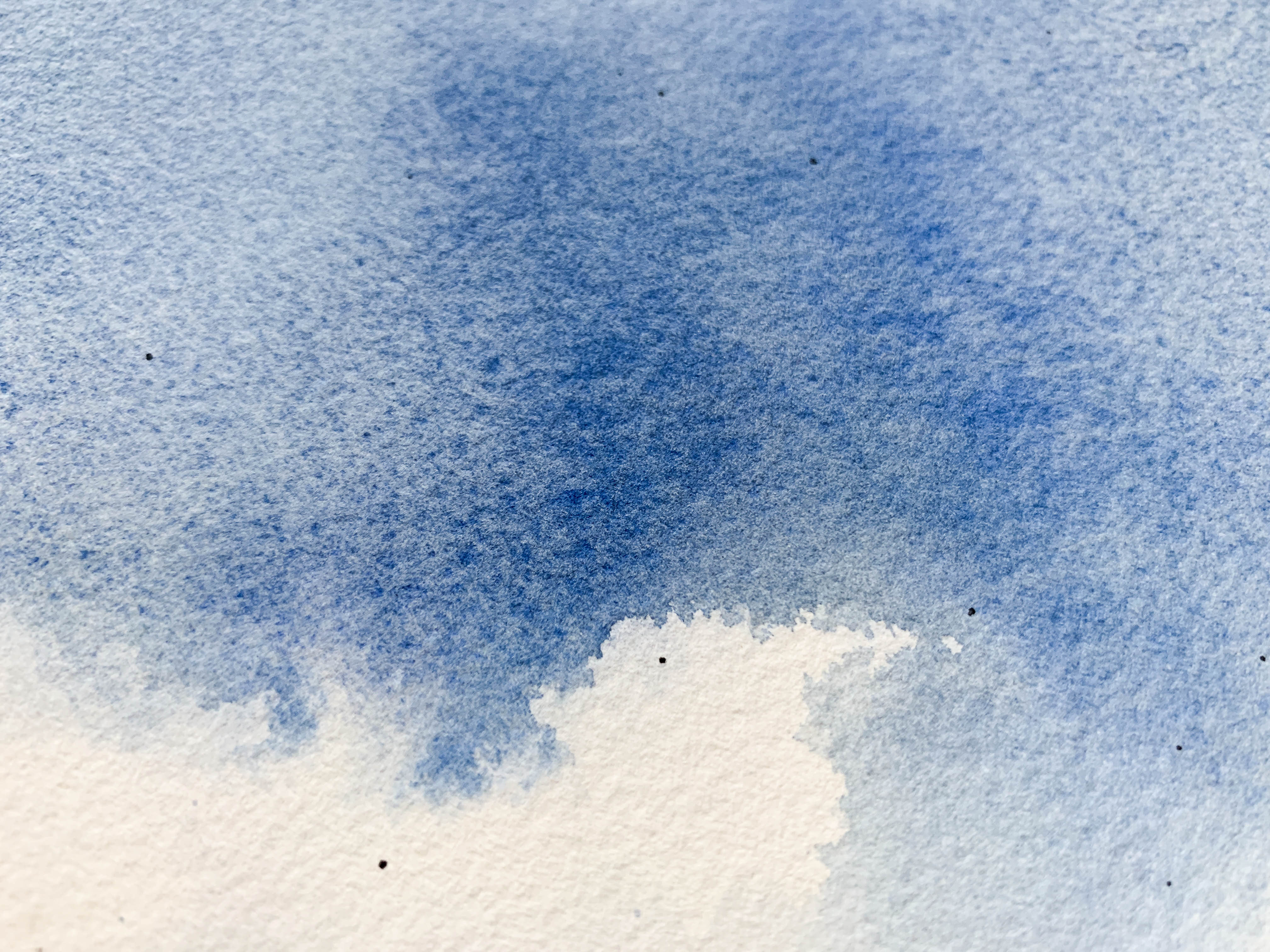 Granulating pigment particles are heavier and coarser than finer ground, even paint pigments. Because of this, they sink into the “holes” or dimples in the texture of the watercolour paper and from this create the uneven paint layer.

So, granulation is more likely to be noticeable on cold pressed and rough textured paper than on a paper without much texture and with less dimples, such as hot pressed. Although, granulation is still possible on smooth paper it may just be less extreme. 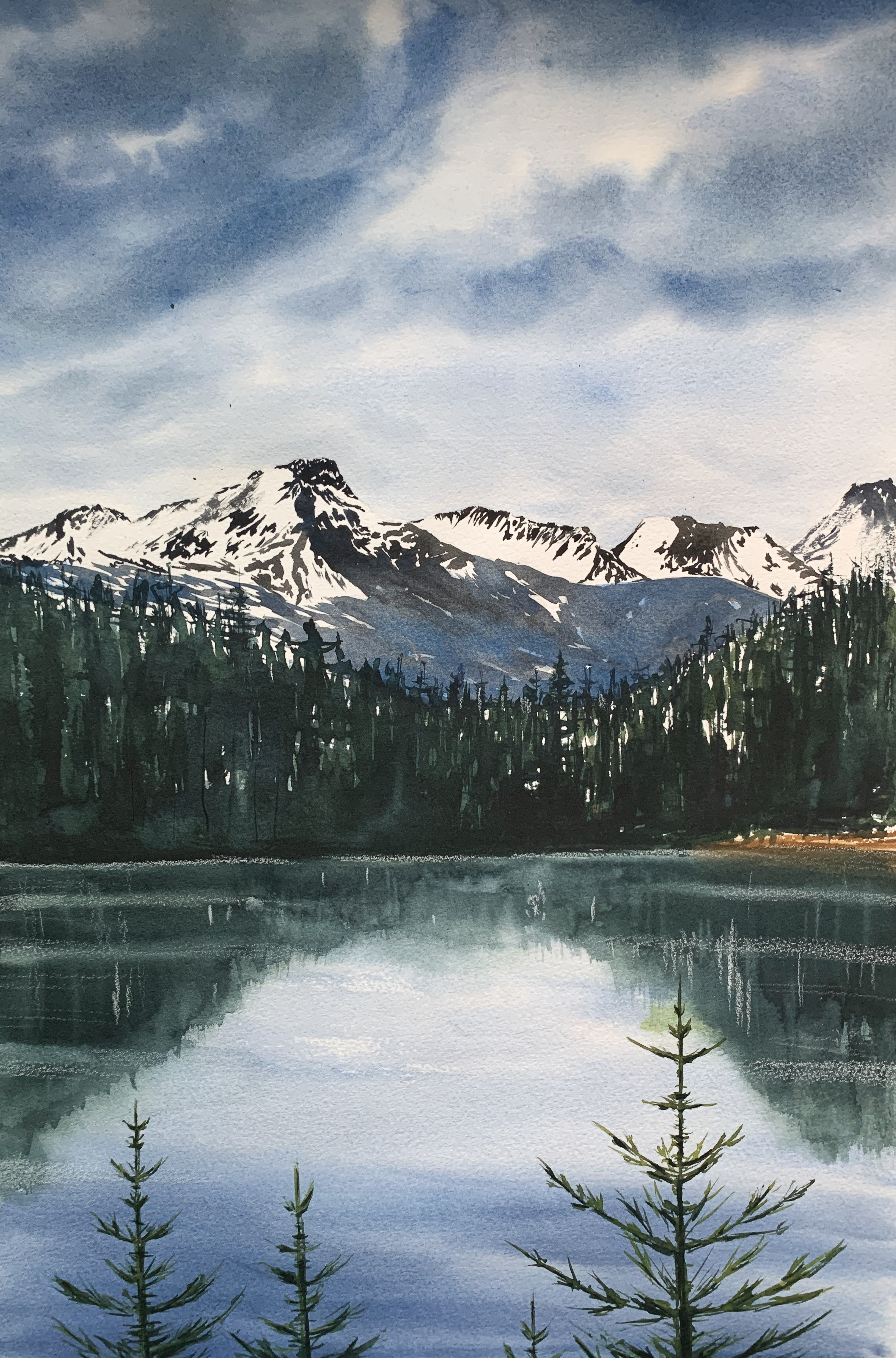 Landscape using granulation to provide texture to the land

All of the above is only theoretical knowledge, which is useful, but it is useless if it is not quite clear when granulation effects will be appropriate.

Most watercolourists use granulating paints or sprays in these cases: 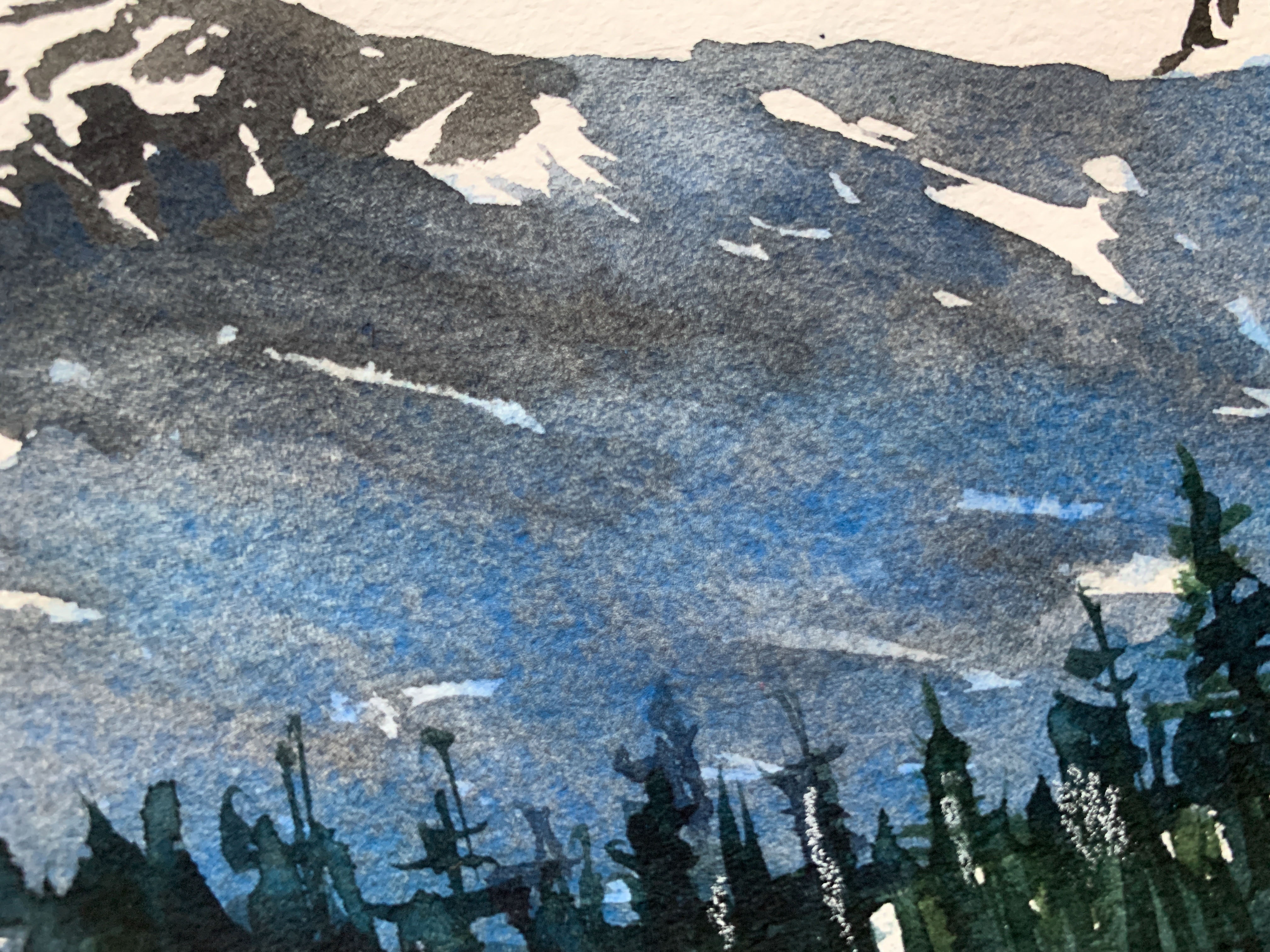 Creating a Granulation Effect in Watercolours Using a Spray

Schmincke has a special spray that can get non-granulating watercolour paints to create a granulation effect called AQUA granulation spray. 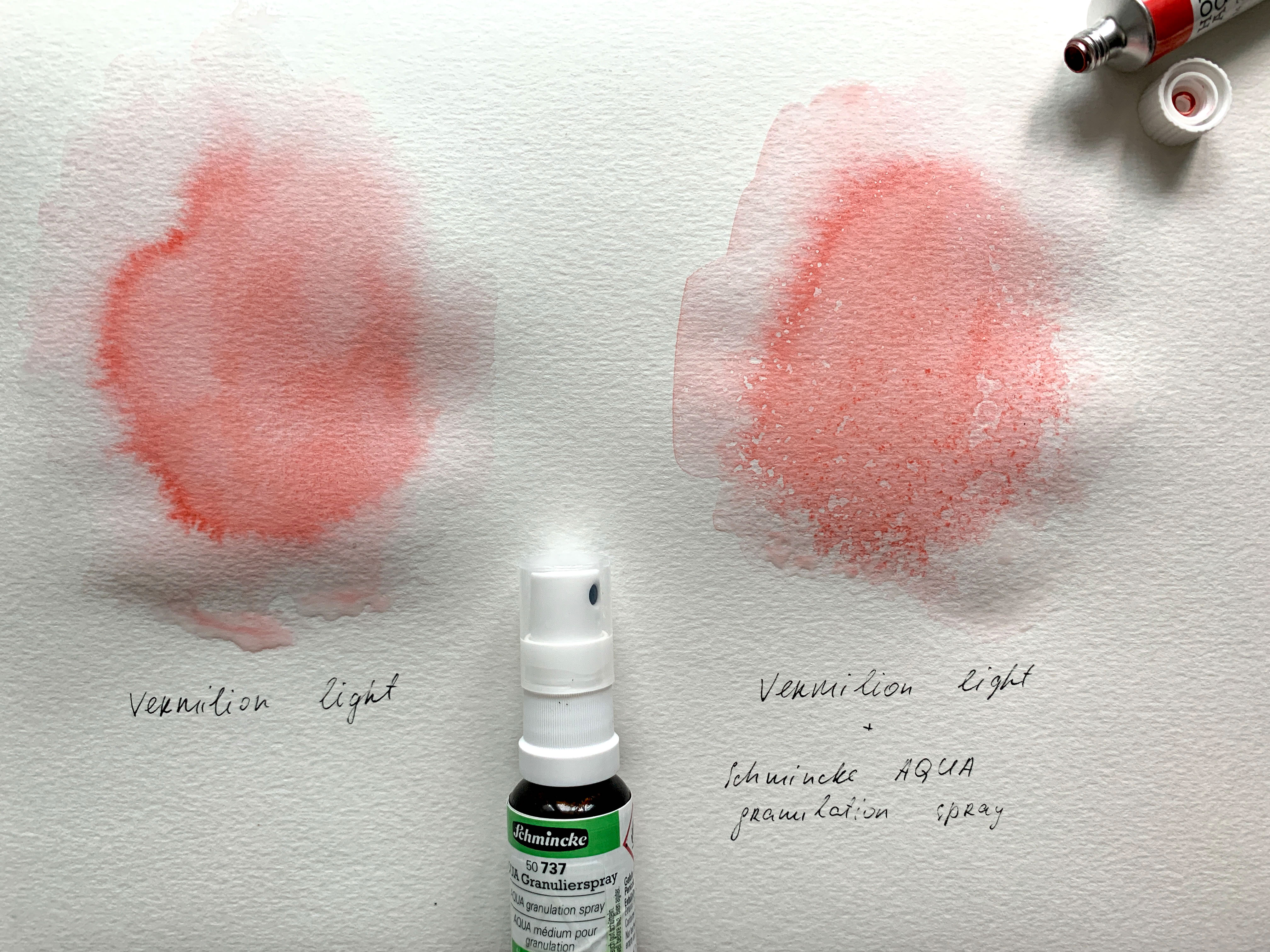 Anna’s test with Schmincke AUA Granulation Spray. On the left is a pure wash of Vermilion Light and on the right a wash with the spray applied showing the dappled granulation effect

I was given an explanation of how the granulation spray works by Schmincke’s laboratory:

“Our 50 737 AQUA granulation spray only imitates the visual effect of granulation. There is no way – without damaging the colour violently – to make a non-granulating colour granulate. It is a pigment property like lightfastness that you can’t change in any direction. The only way to imitate the granulation is to leave some small spots free from colour: the medium pushes the pigment particles away by falling on the wet colour and the resulting effect gives a granulating structure to the colour layer, while the mechanism is of course completely different.”

They also let me know that the spray should be applied to the paper from a distance of at least 20-30 cms. This is really important as if you spray it closer, it could cause the formation of a round spot in the centre of where you sprayed or an unwanted layering of paint. 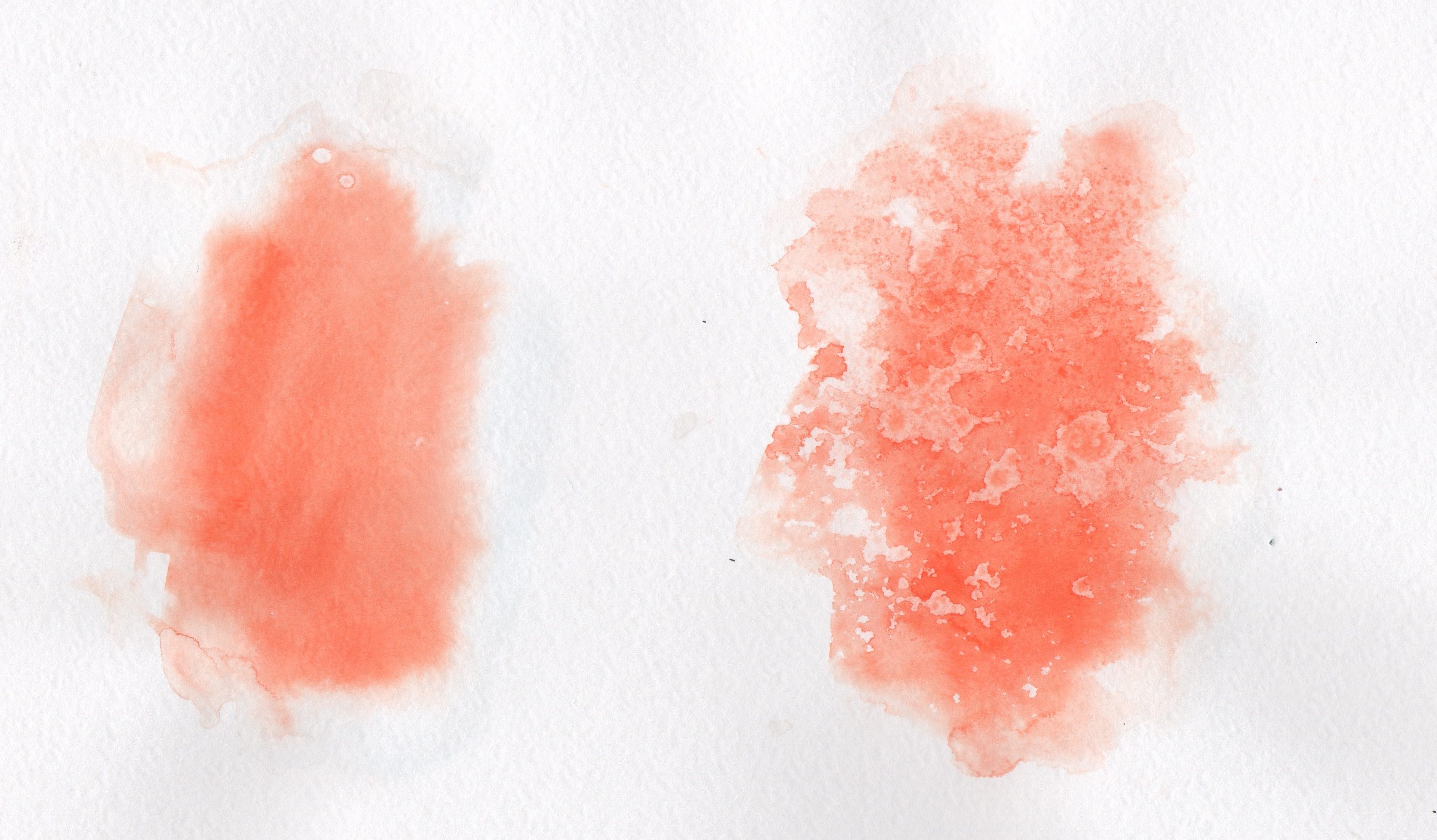 The picture shows the same paint on the left side of the picture with an even wash and on the right with the spray applied. Of course, natural granulation looks even more spectacular, but in a situation where you want to create additional texture and an even more interesting wash with a non-granulating watercolour, this spray is really useful. 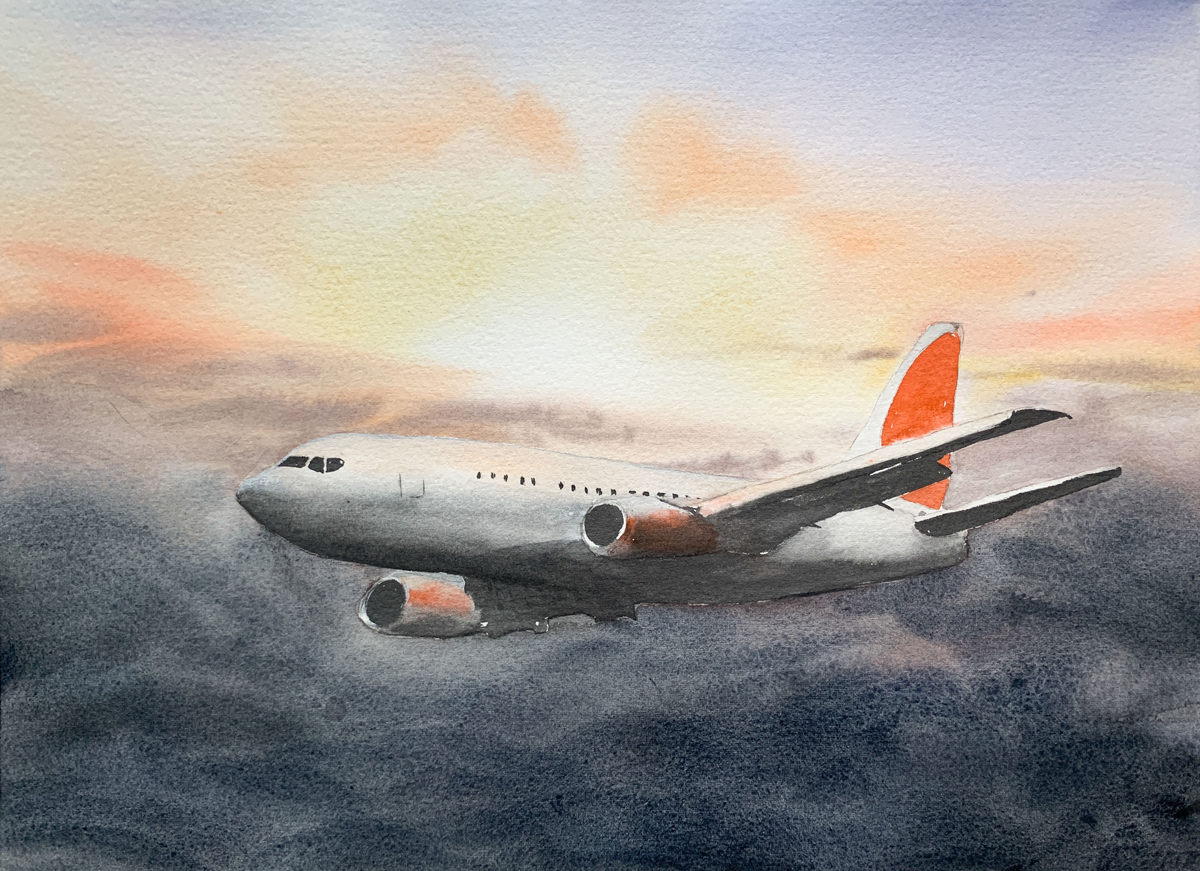