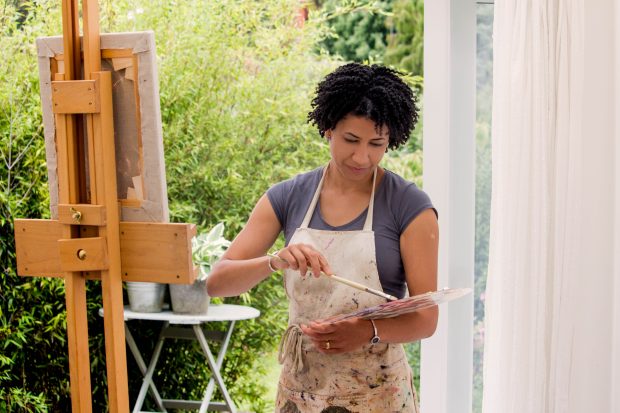 Jenny Fay: ‘It’s the Struggle That Makes A Painting Exciting’

Jenny Fay’s painting ‘Portrait of a Young Artist’ was shortlisted for the Jackson’s Painting Prize earlier this year. Expertly crafted, the portrait demonstrated Jenny Fay’s sensitive use of colour, and her ability to describe skin tones and contours with just the right number of brush marks to keep the vibrancy fizzing. In this interview Jenny shares her thoughts on working to commission, why Heatherleys School of Art changed her life and which Michael Harding oil colours never stray too far from her palette. 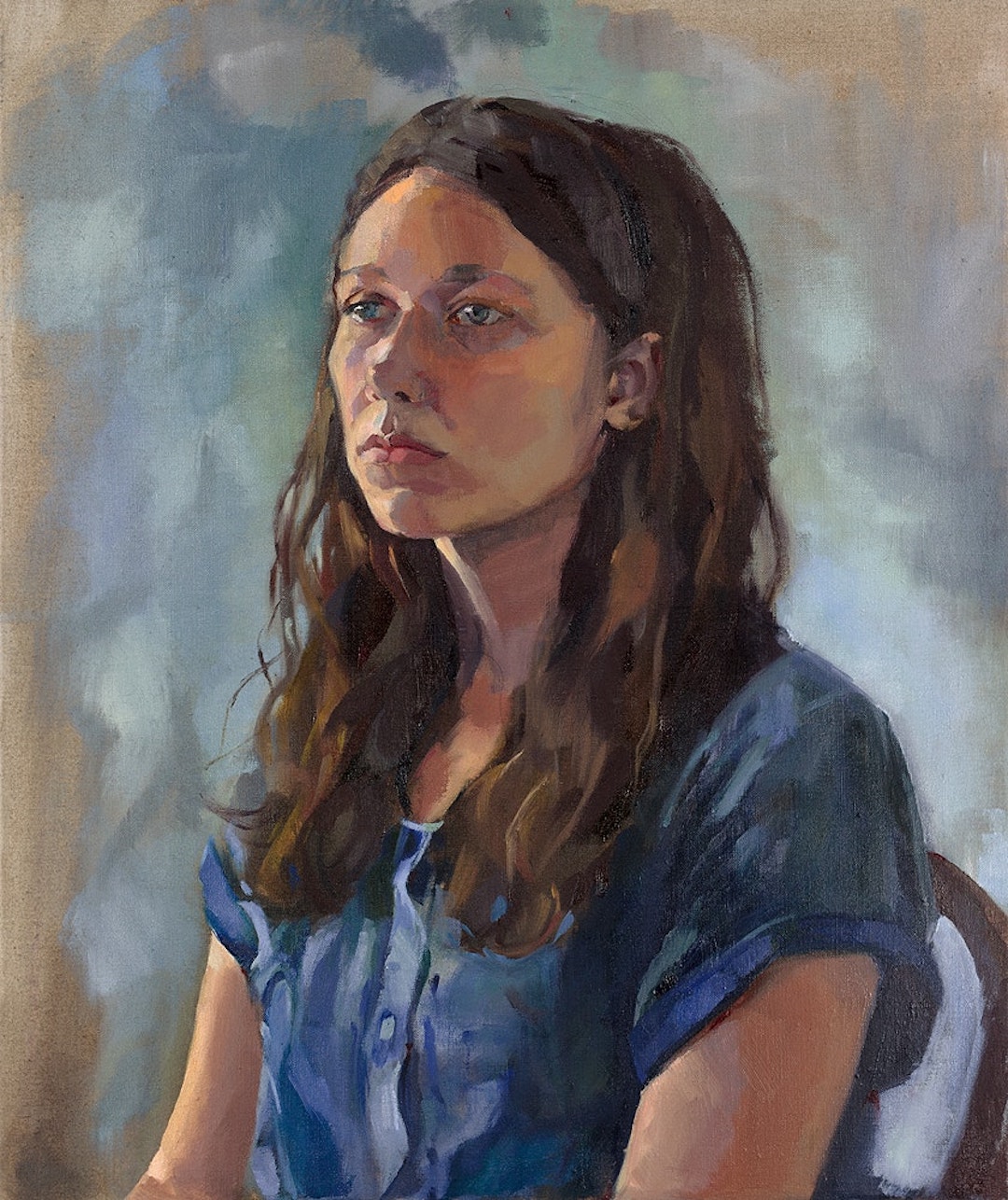 Lisa: Who is the artist in your painting?

Jenny: The artist is Bernadette Timko. Bernadette, or Berni as she was known, worked as a model at the art school where I trained before enrolling on the portrait painting diploma herself. She has gone on to become a successful painter. Somehow I felt the painting would have a greater sense of universality if it wasn’t named after one particular person, hence the title. 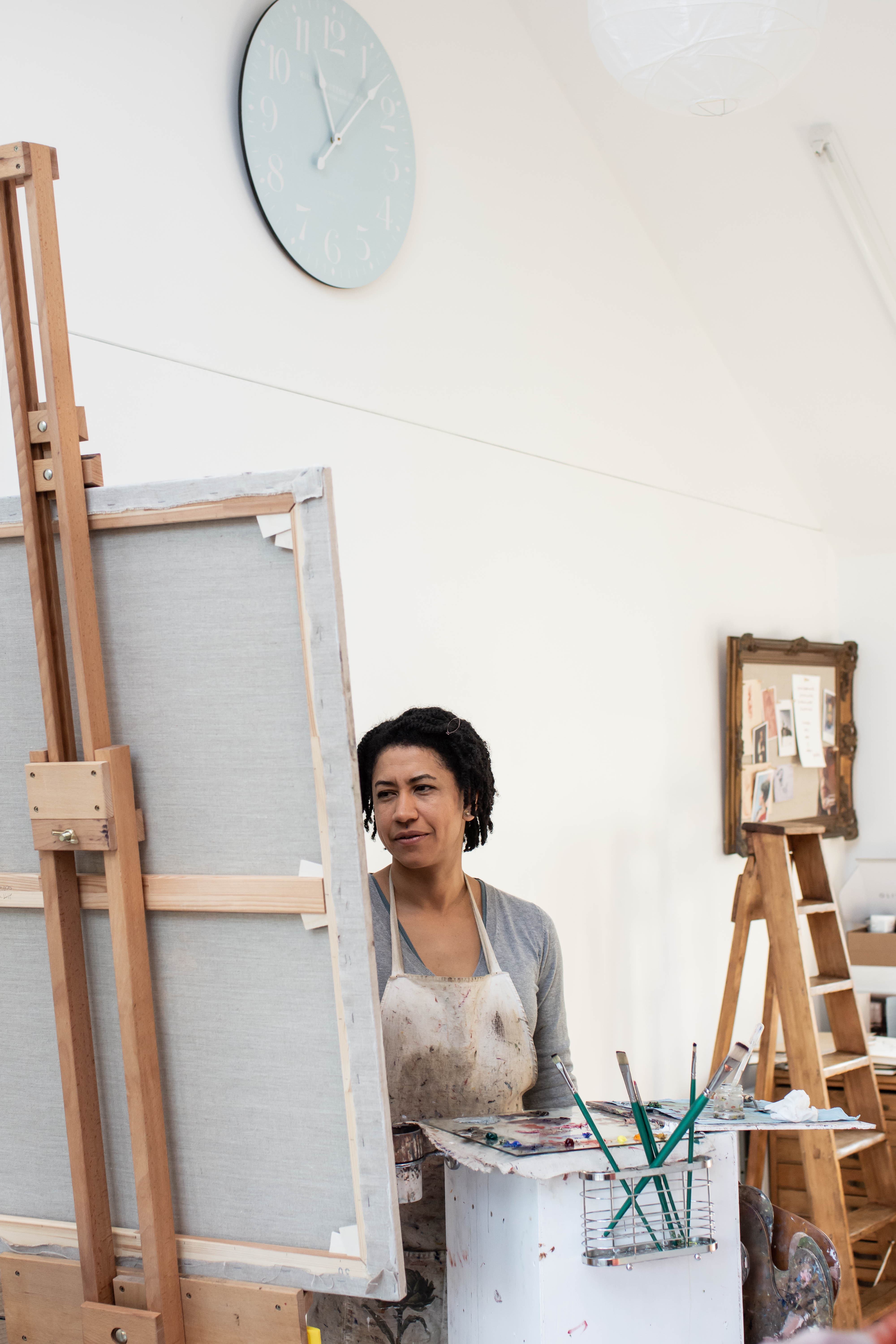 Lisa: Are there ever any surprises in the process of painting a portrait, or is the process a set of familiar stages that you go through?

Jenny: There are always surprises when I’m painting portrait! I allow myself to have second thoughts about each part of a portrait so that it evolves organically. I’m happy for my paintings to go through stages where they don’t look particularly presentable. I think that process, that struggle, is what makes a final painting really interesting and exciting. If I ever get to the stage where I am just walking through a set of steps then I think the portraits will start to lack vitality. 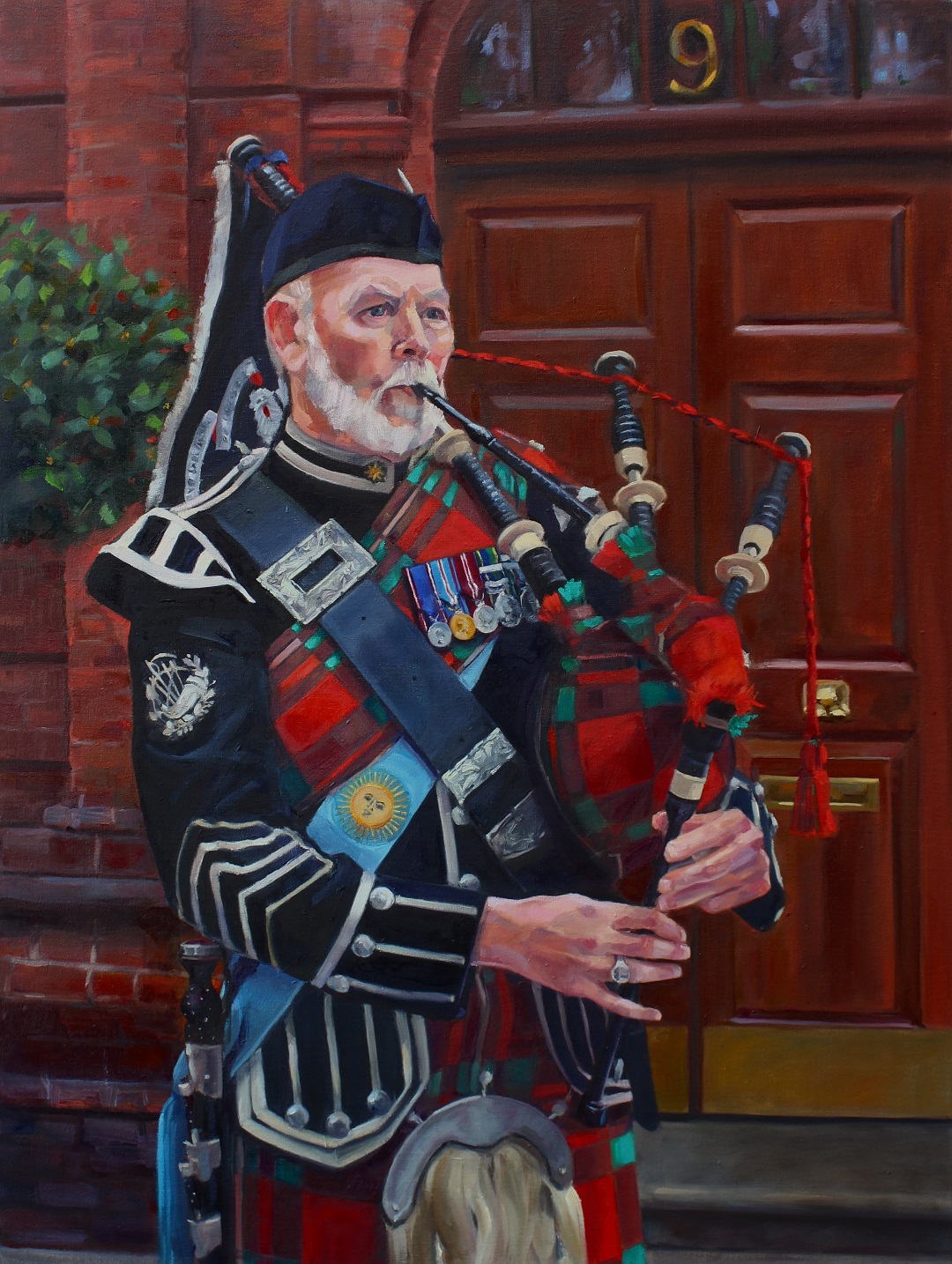 Lisa: What makes a good subject for a portrait and have there ever been any commissions you have not been able to work on because the subject just wasn’t right?

Jenny: I am asked to do portraits of dogs with surprising frequency and I always turn them down – it’s just not my thing! As long as the subject is a human person then I am always genuinely delighted to paint their portrait. We are all so different and there are so many interesting nuances to be found in every single person’s face. I think a portrait should be about more than what can be seen on the surface. It should also be about the character of the person, the mood during the sittings and maybe even the artist’s own temperament. 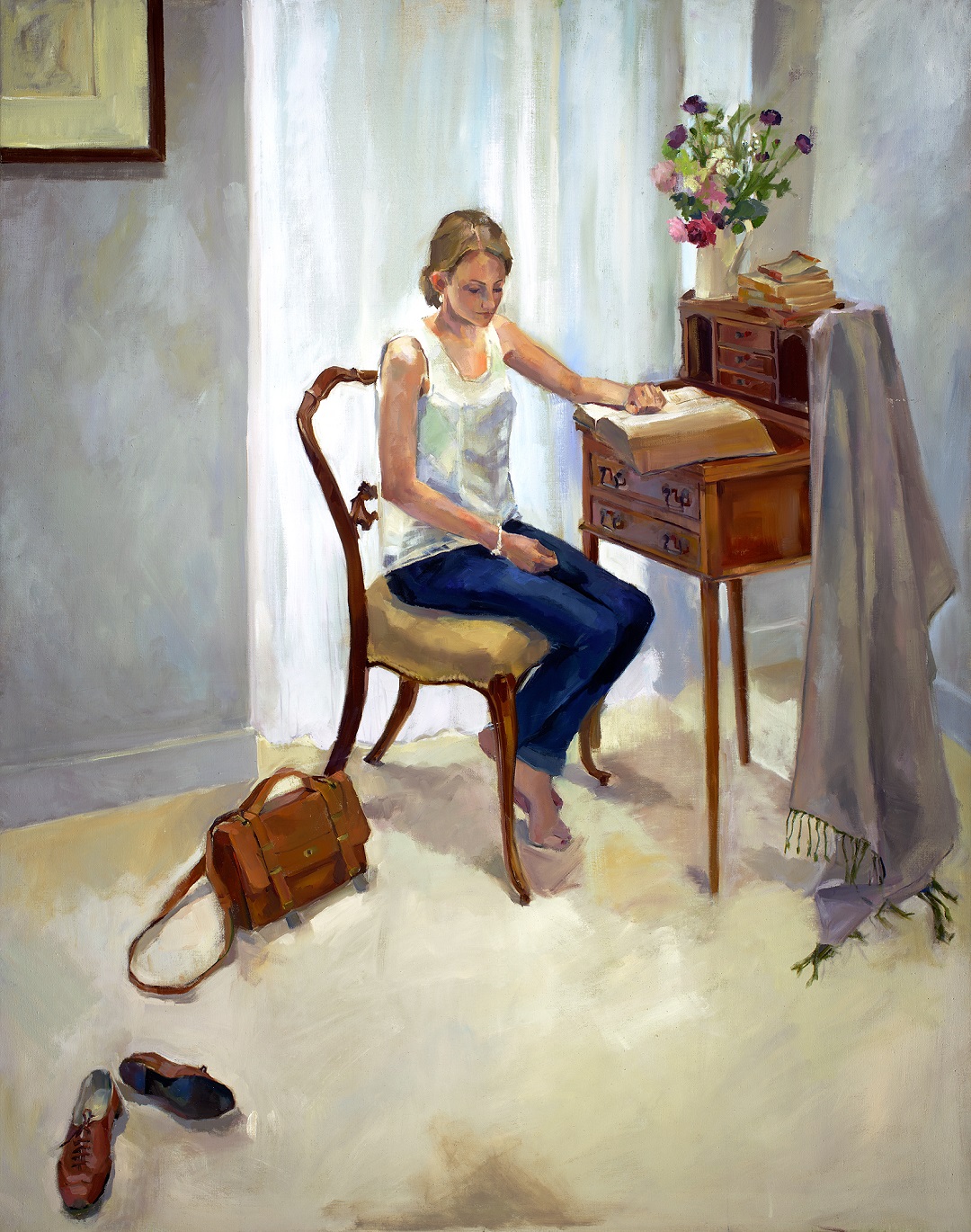 Lisa: Do you tend to work with the same colours in each painting and if so, which colours are never far from your palette? Also are you loyal to any particular brands?

Jenny: I’ve used Michael Harding oil colours for about five years now and I love the depth of colour, their richness and vibrancy. My basic palette is what’s sometimes called a ‘thermal’ palette i.e. a warm and cool version of each of the primary colours plus white and a dark colour. However, in reality, I use predominantly just three primary colours: lemon yellow, alizarin crimson  and French ultramarine blue along with Titanium White and Raw Umber. Other colours I love adding sometimes are Indian Yellow, Viridian (green) and Indigo. Recently I’ve been experimenting with new pigments and have discovered that Genuine Chinese Vermillion and Genuine Naples Yellow are fantastic for creating skin tones.

Lisa:  Are there any rules that you impose upon yourself with regard to how you design the composition of the painting?

Jenny: I try not to develop a formula for the compositions because I want each painting to be unique and to reflect the personality of the person sitting. But there are certain canvas sizes that work particularly well for me so I tend to use 10 x 14 inch canvases for portraits of young children and I like 20 x 24 inch canvases for portraits for adults. There are times when I work on larger paintings where the figure is within a setting, for example in a garden. Then I’m very conscious of how the viewer’s eyes will travel around the painting. The most important thing seems to be where the person or people in the painting are looking. That has a huge impact on the ‘narrative’ element of the painting.

I’ve just recently been experimenting with profile portraits and a couple of years ago I worked on a series of portraits where I only painted in the centre of the canvas and left the lovely grey of the linen visible at the edges. 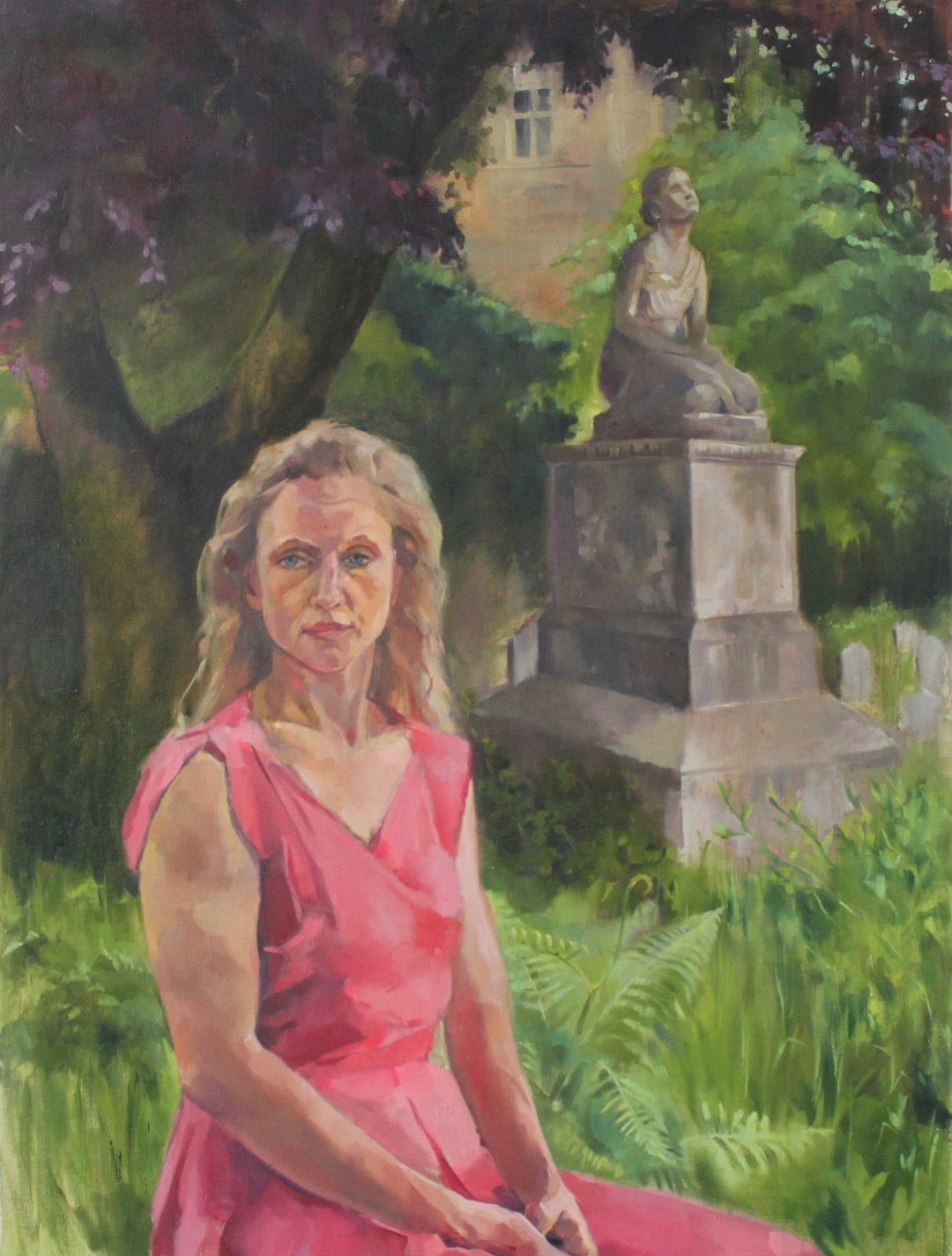 Jenny: Yes, I find that having a chance to explore some of my own ideas in non-commissioned work is really important for maintaining creativity for my commissioned portraits. Luckily very few of the people who commission portraits come to me with a fixed idea of exactly what they want. That means that it does become a collaborative process as we look at different options for the composition, the colours, the scale and so on. In this way we generally find something that is interesting for me as a painter and also something that the client will enjoy looking at. On many occasions I’ve asked someone to sit for me so that I can try out some new ideas and they’ve later asked to buy the portrait. So what starts off as a non-commissioned piece often ends up being sold! 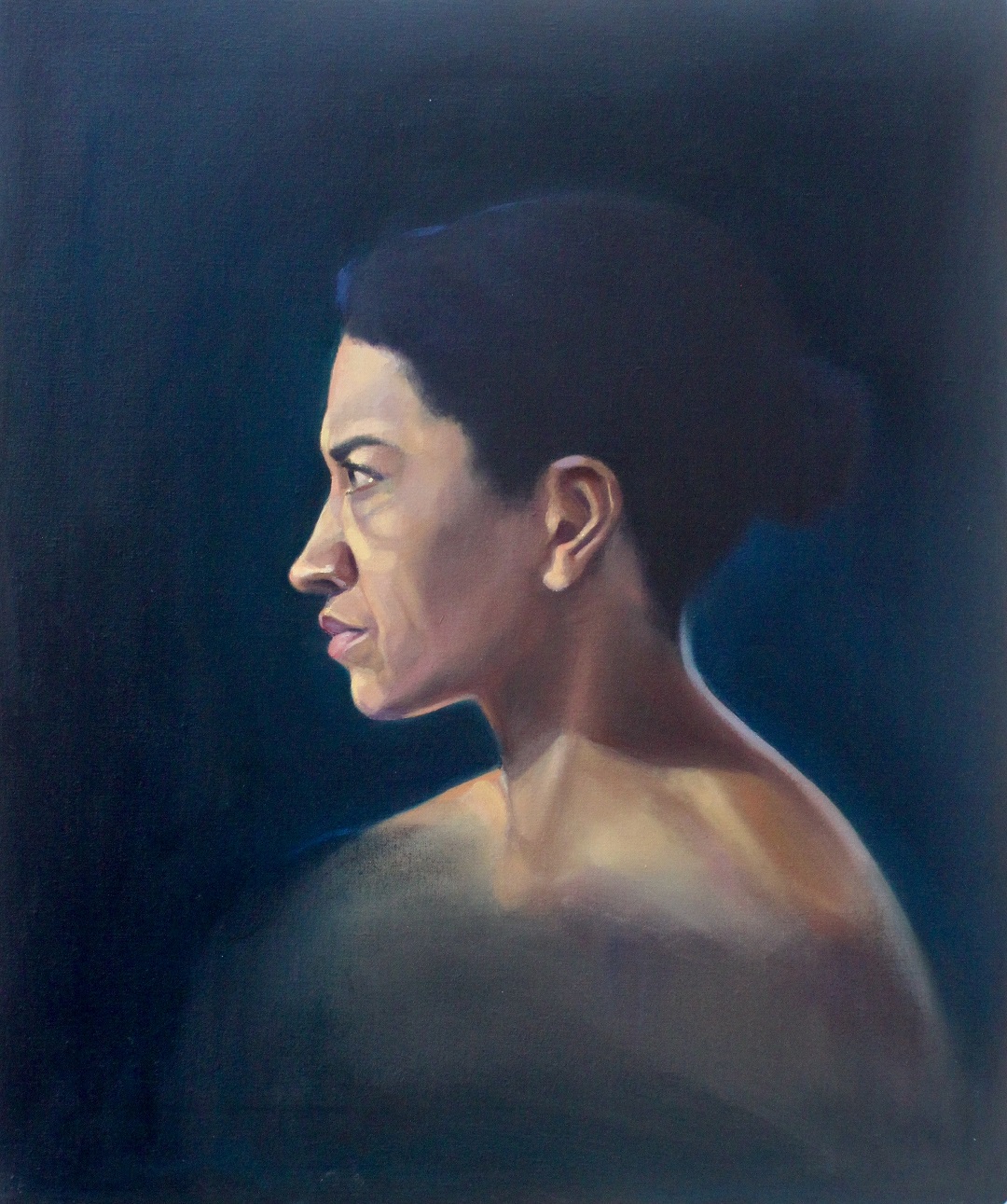 Lisa: How would you describe your experience of studying at Heatherleys?

Jenny: I can honestly say that my time at Heatherleys was the best two years of my life. From the moment I walked into the studio I felt like I was in a completely different gear as an artist. I had been working out of a tiny bedroom and suddenly I was in this huge, light-filled space with high ceilings and an amazing buzz from the students, teachers and models around me. I definitely learnt as much from the work and methods of my fellow students as I did from the tutors. We had a range of tutors most of whom were also practicing artists so they brought an enormous wealth of experience. At times it felt confusing that each tutor had their own approach, but I think the result was that we were each given the freedom to find our own visual language. There are certain art schools that seem to produce artists whose work is identical. I think that is a real shame. 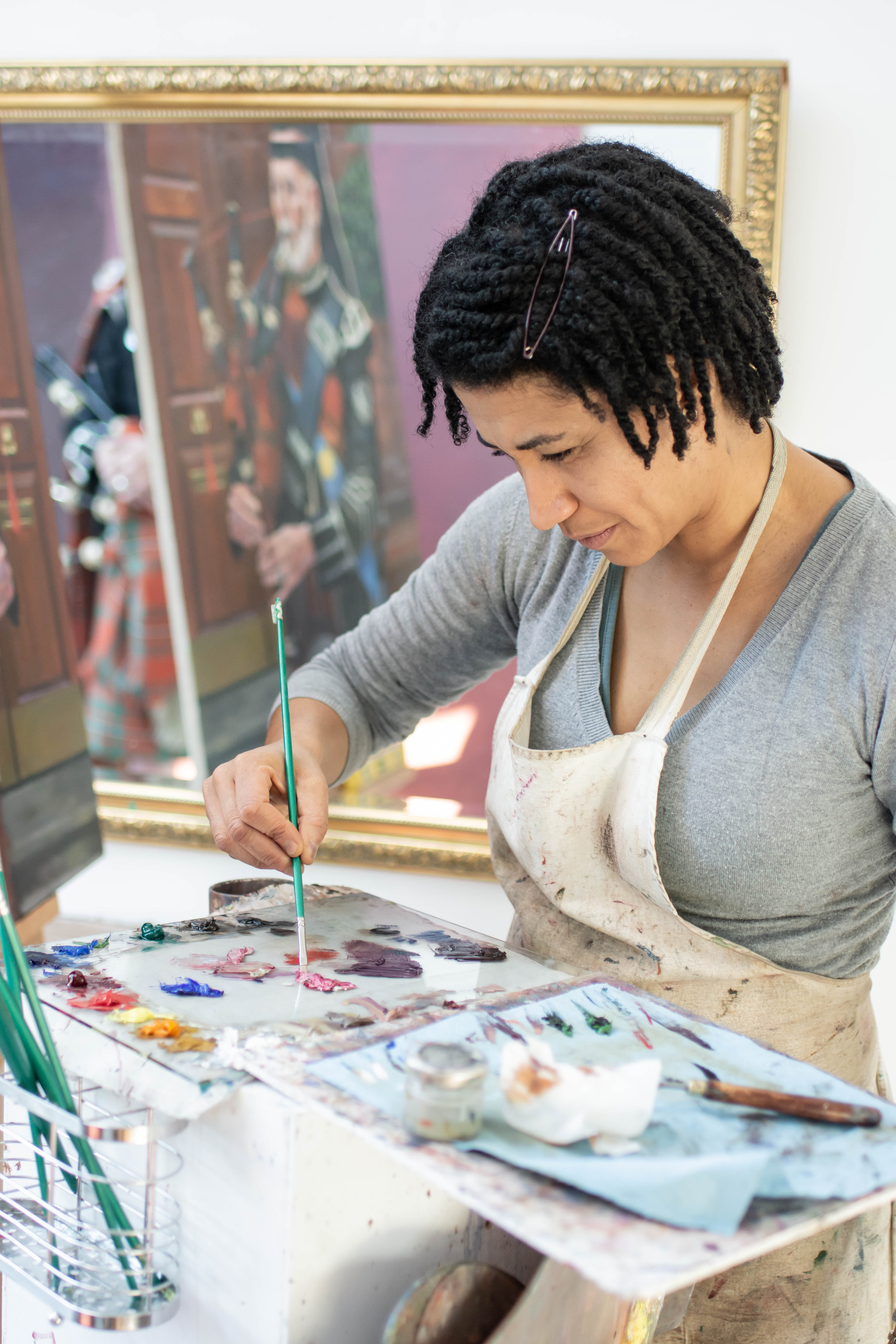 Lisa: What are the best and worst things have been said to you about your work?

Jenny: I remember a particular tutor making a passing comment that was “now that you know that you can’t paint eyes…”. I was astounded that she could make that judgement about me having seen only one of my paintings and I just decided to take no notice of that remark.

One of the most interesting and encouraging observations of my work came from a playwright I was collaborating with who looked at a series of my self portraits. Although she hardly knew me, she had a remarkable insight into what I was expressing in the paintings and even what I was going through when each one was painted. In fact some of her observations demonstrated that the paintings showed things that I wasn’t even aware as an artist that I was purposefully putting down in paint. It was somehow humbling and exhilarating at the same time. I felt like my paintings meant something to somebody else and would have some sort of enduring quality that would be interesting in the future. 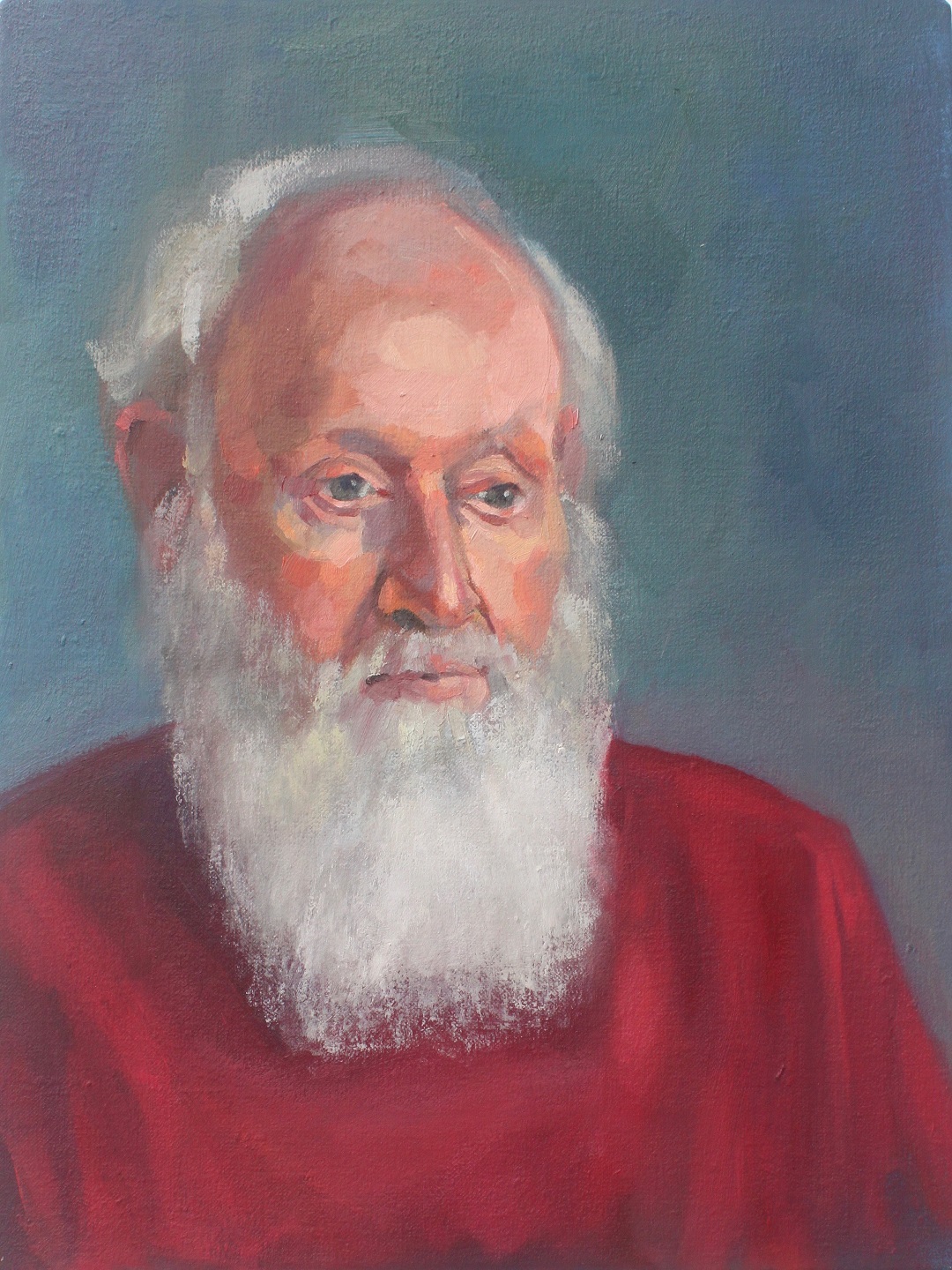 Lisa: There is a wonderful photo of you in a light filled studio on your website. Can you describe where you paint and what you love most about your space?

Jenny: During my final year studying at Heatherleys I realised that the studio that I’d been renting whist on the portrait diploma was getting too expensive because it was very large and difficult to heat. So we made the decision to convert our garage into a studio and it has turned out to be such a good move. The most important thing was getting the lighting right and luckily the space is north facing and we were able to put large glass doors at the back and windows in the roof. We’ve also created a vaulted ceiling which makes it seem bigger than it is. I love the fact that the space is really flexible. I have a couple of platforms that can be used singly,  placed next to each other or stacked for the sitter to be raised up. I’ve also got some large, thin pieces of MDF that I paint different colours to use as backdrops. My favourite thing is the painting stand that my husband custom made for me – it has wheels on the bottom, a toothbrush cup in a holder on the side for solvent and even a cutlery draining rack to keep my paintbrushes upright! 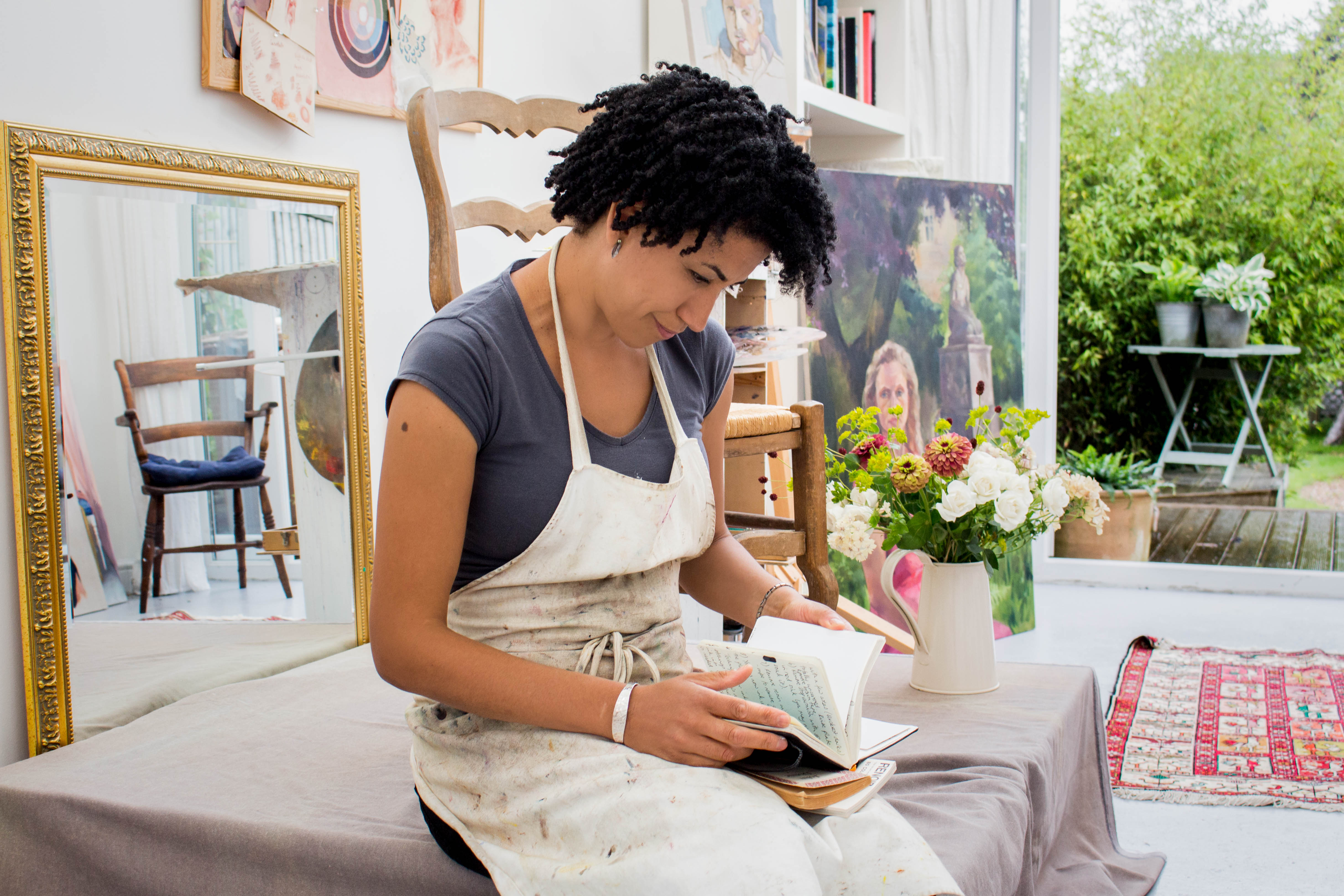 Lisa: Where online or in the flesh can we view you more of your work?

Jenny: My website  www.jennyfay.co.uk is my online portfolio and I also exhibit regularly with the Oxford Art Society. To see work in progress in the studio, follow me on Instagram or Facebook @jennyfayart. Studio visits can also be arranged via the website www.visitmystudio.com. 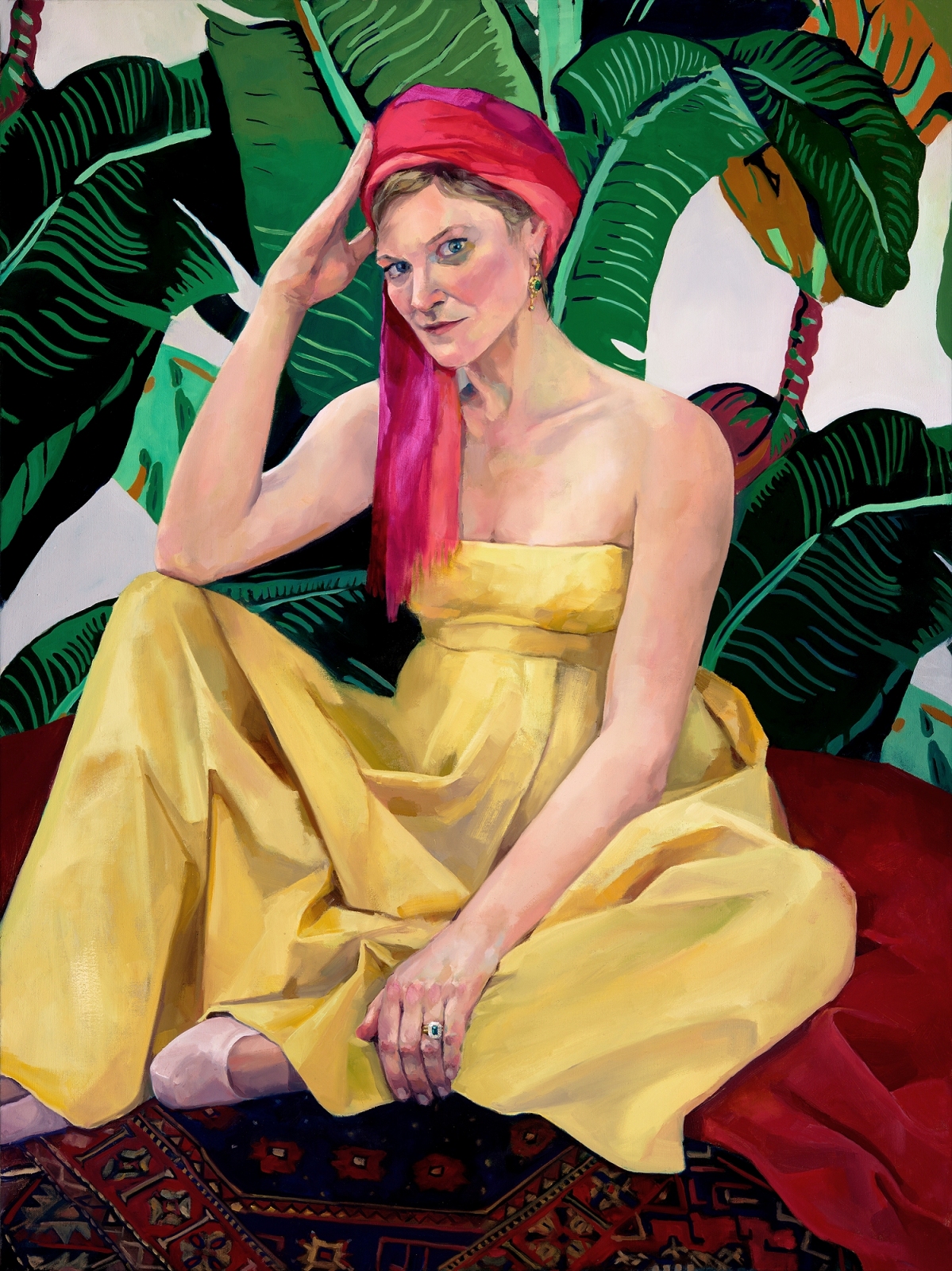