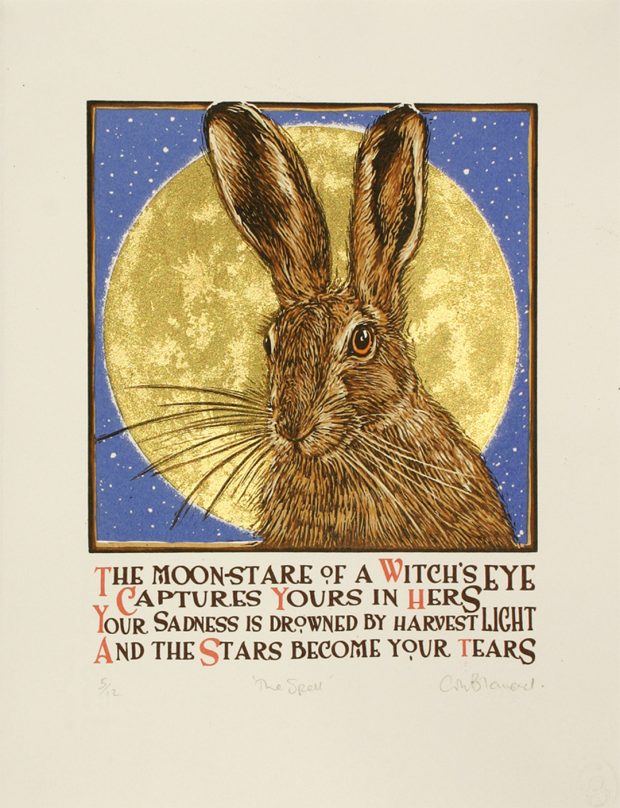 In this post artist Colin Blanchard charts his journey through making a print of a hare incorporating Screenprint, Linocut and Gold Leaf.

A while ago I wrote a post about lino tool selection; and in that I demonstrated carving a little unmounted ‘grey’ lino block. I set it up on my little portable press (actually an XCut Xpress ‘craft’ press) and was pleased enough with the proof to give some thought to developing the image. So as I often do, I planned to combine screen print with the linocut (plus something else new that I wanted to try) and I ended up making a small but quite successful edition. This is how I did it.

Like most printmakers, I’m always keen to experiment with different technical challenges. Just recently I have been working on the technique of screen printing with a mix of acrylic gold size and screen ink base and then applying real 23ct gold leaf (transfer as opposed to loose) to the printed image. For this print I wanted to see if I could screen print in transparent colour on top of the applied gilding! 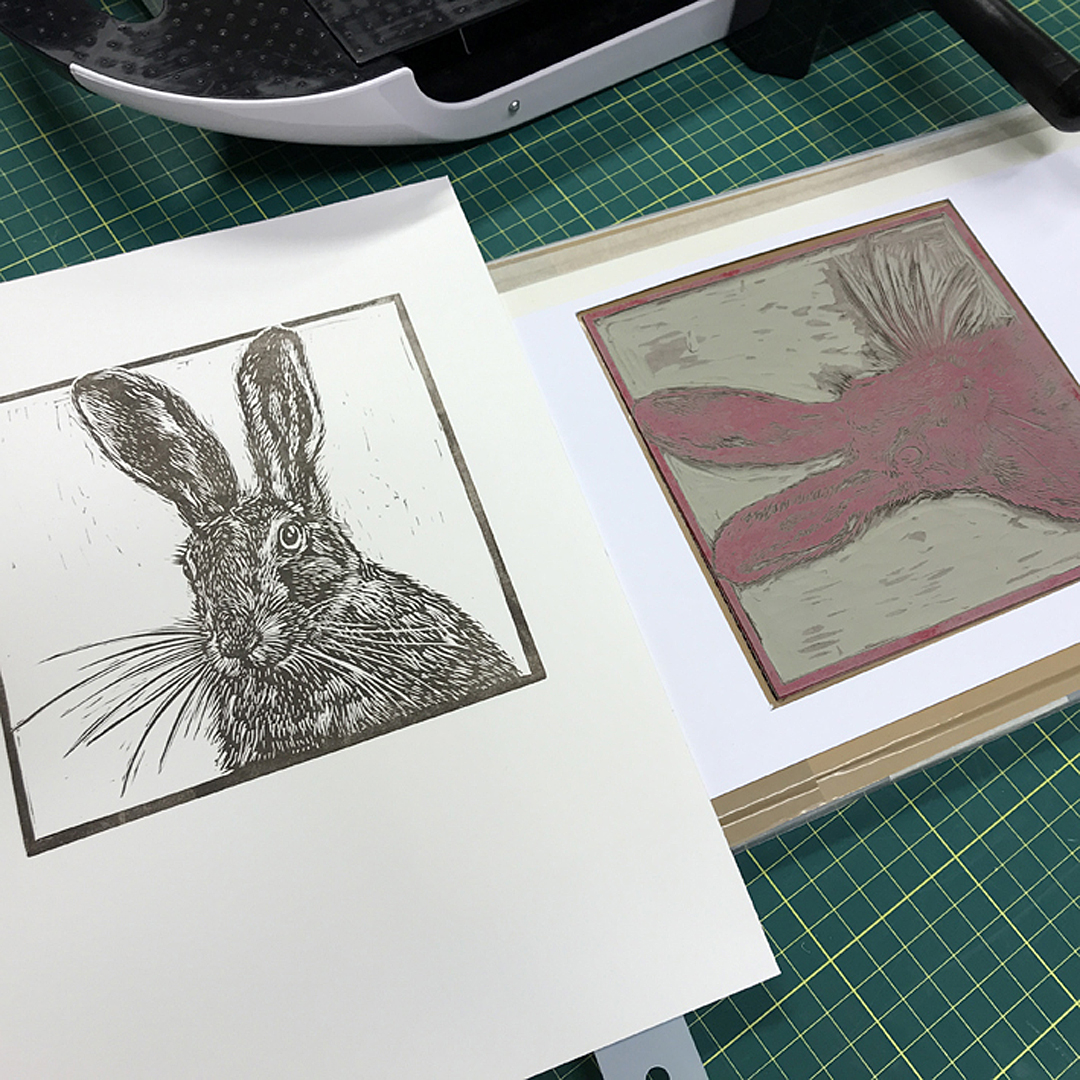 1a. A proof was taken of the finished demo block.

1. First the lino block was set up on the little press with a registration system using ‘Ternes Burton’ metal pins and plastic tabs. This system not only prevents print slippage in any sort of roller press, but with care, also allows me to use the same tabs for both lino and screen printing. I took a couple of proofs, in careful register, from the block. At the same time I prepared fifteen or so sheets of my preferred White Satin Somerset 300gsm paper with their TB tabs. 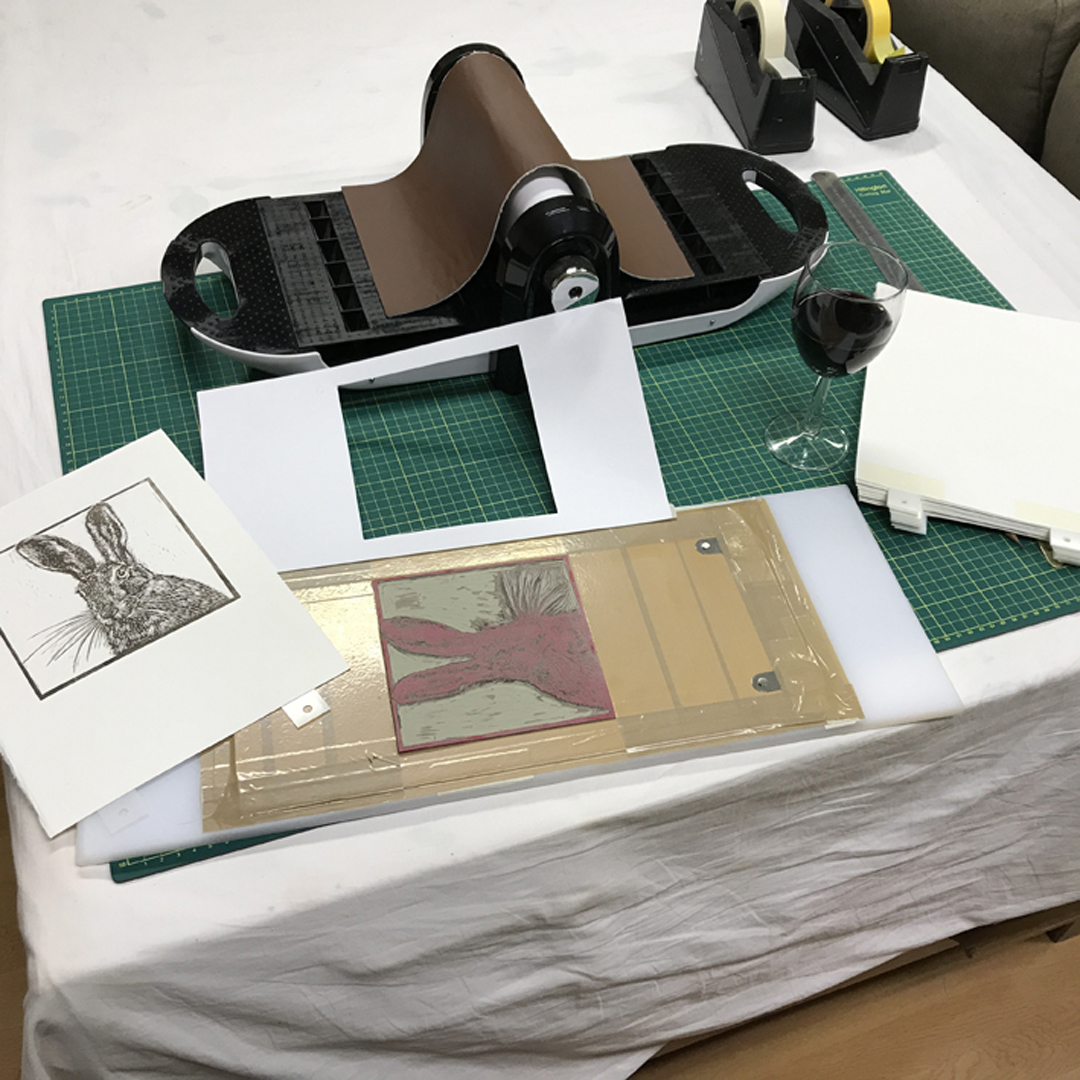 1b. Fifteen or so sheets of paper were prepared and set up with registration system.

2. Using one of the dried proofs, a simple screen stencil was prepared on a 90t mesh screen. This slightly coarser mesh (than my usual 120/140t) puts down sufficient gold size/ink base in one printing pass. The TB pins are taped to the screen bed well out of the way of the passing pressure of the squeegee when printing, but I usually apply a little protective gaffer tape on the underside of the mesh where the pins touch – just to be extra sure the screen is not damaged. The same tabs on the edition sheets work well to give me accurate registration between the two printing methods. 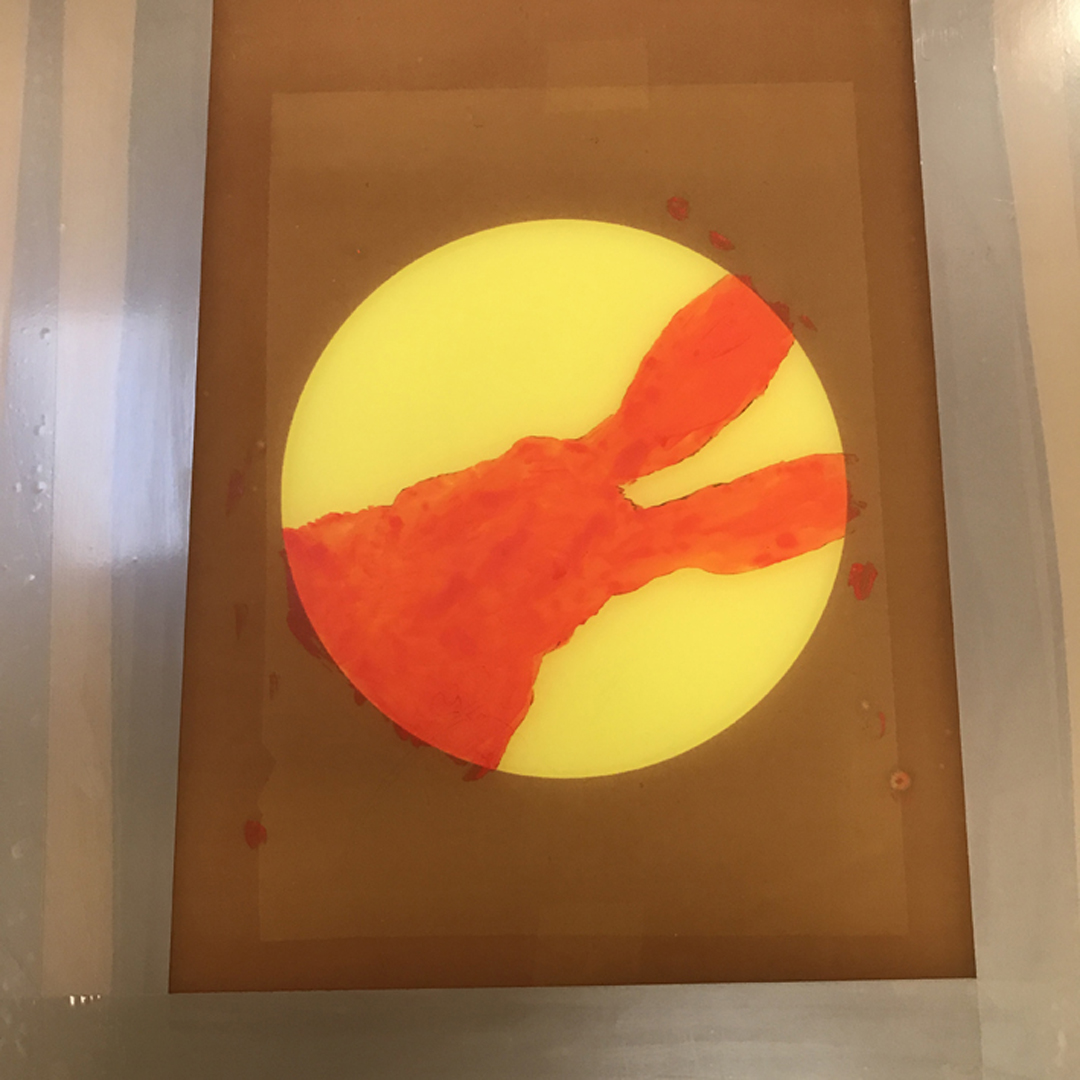 2. A simple stencil to lay down the size and ink base mix

3. All fifteen sheets were then printed with their size mix and the gold leaf applied. I have found it best, if possible, to apply gold leaf first of all to a print; as any slight tackiness of ink already applied (screen or lino) even if dry, can attract annoying bits of the gold.

Then came the riskiest part of this project. Could I print a transparent grey on top of the gold to create a moon surface texture effect, without losing the brightness and impact of the gold leaf? Or had I wasted a couple of day’s work? …..not to mention all that gold! 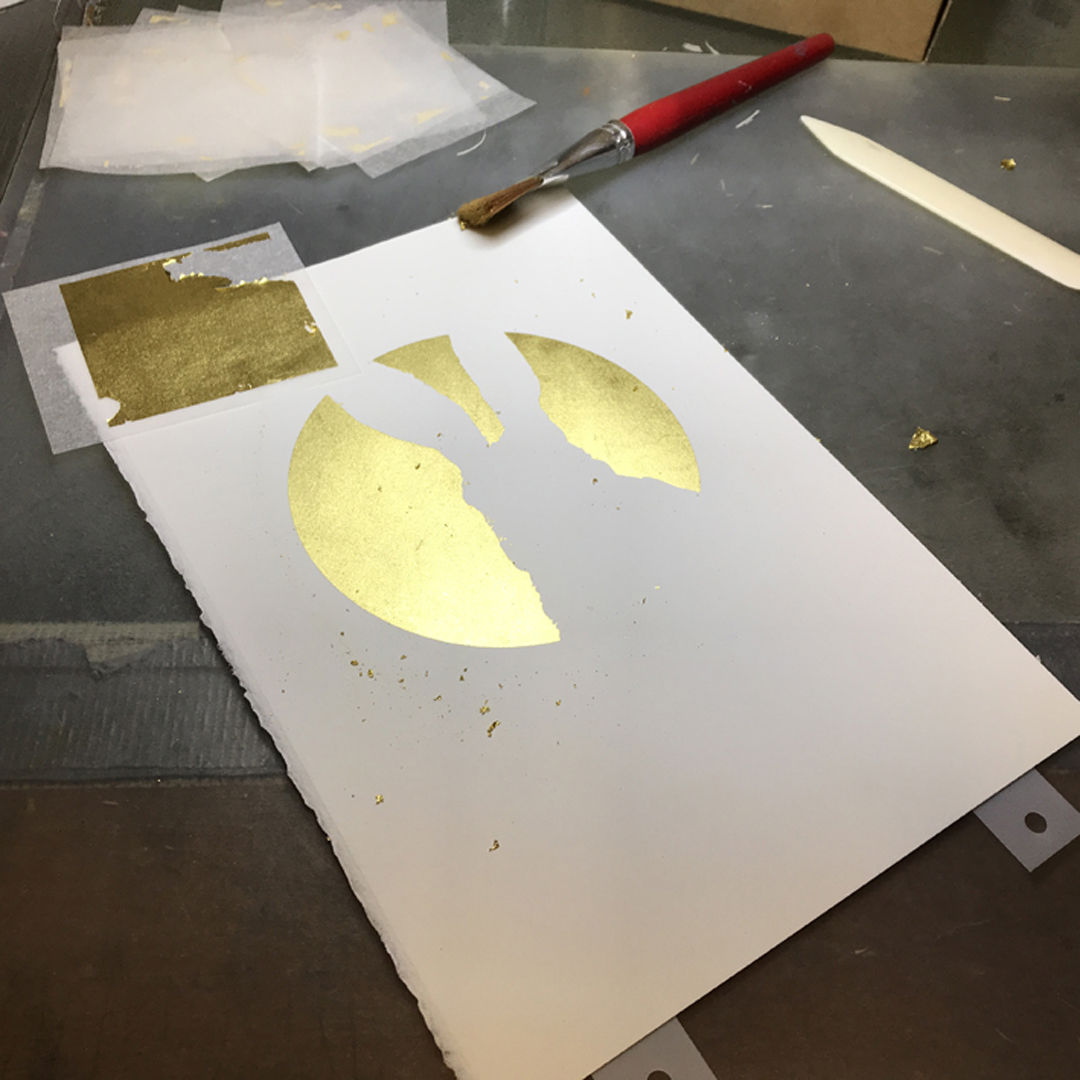 3. Each sheet was gilded before any more ink was applied . 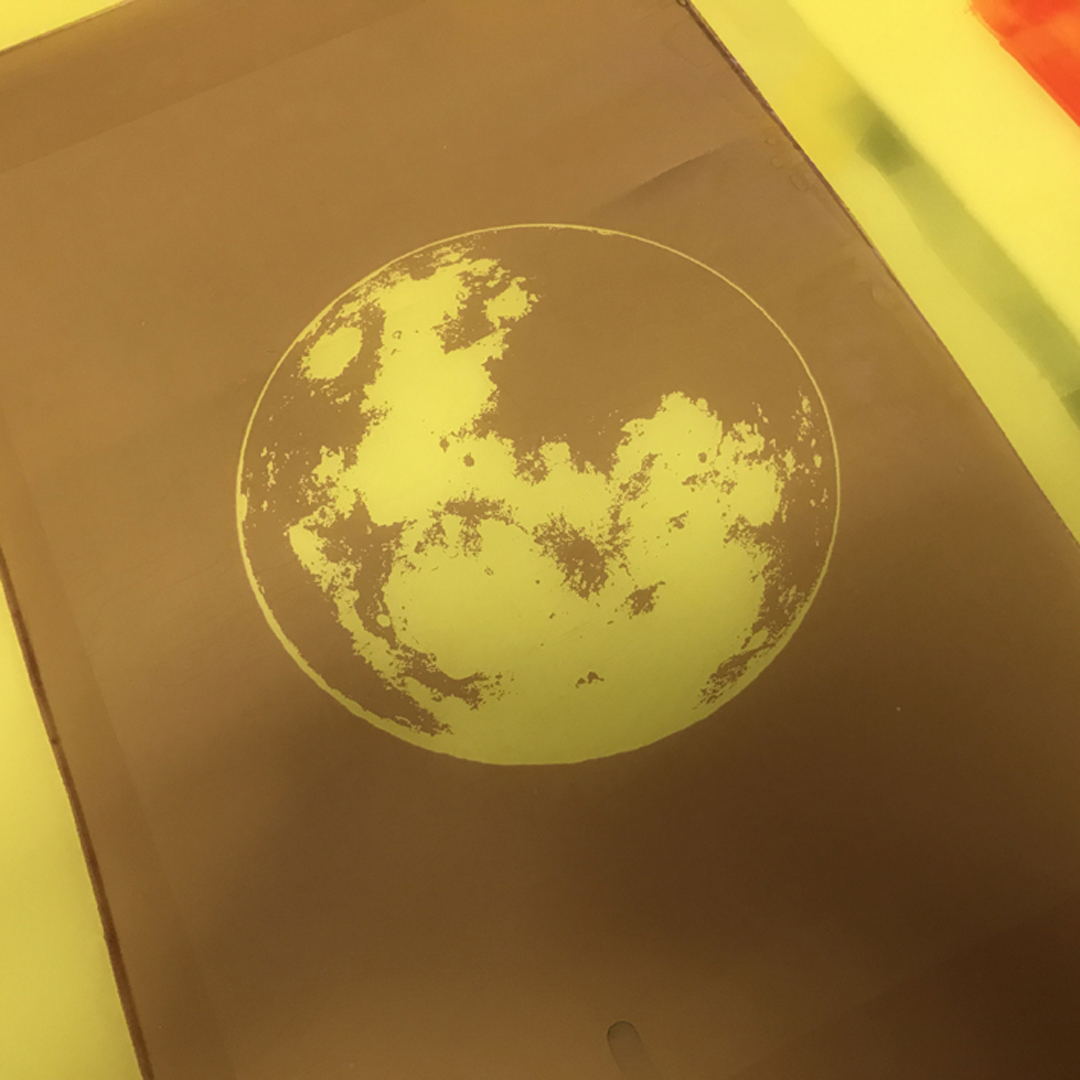 4a. First attempt was a photo stencil of a full moon

4. I first made a photo-stencil from a free image of the moon. This was clearly going to put down too much ink and also have perhaps a too ‘photographic’ quality. So after two more attempts with photoshopped film positives, I simply worked on one of the photo stencils by hand to put the extra marks where I wanted them. 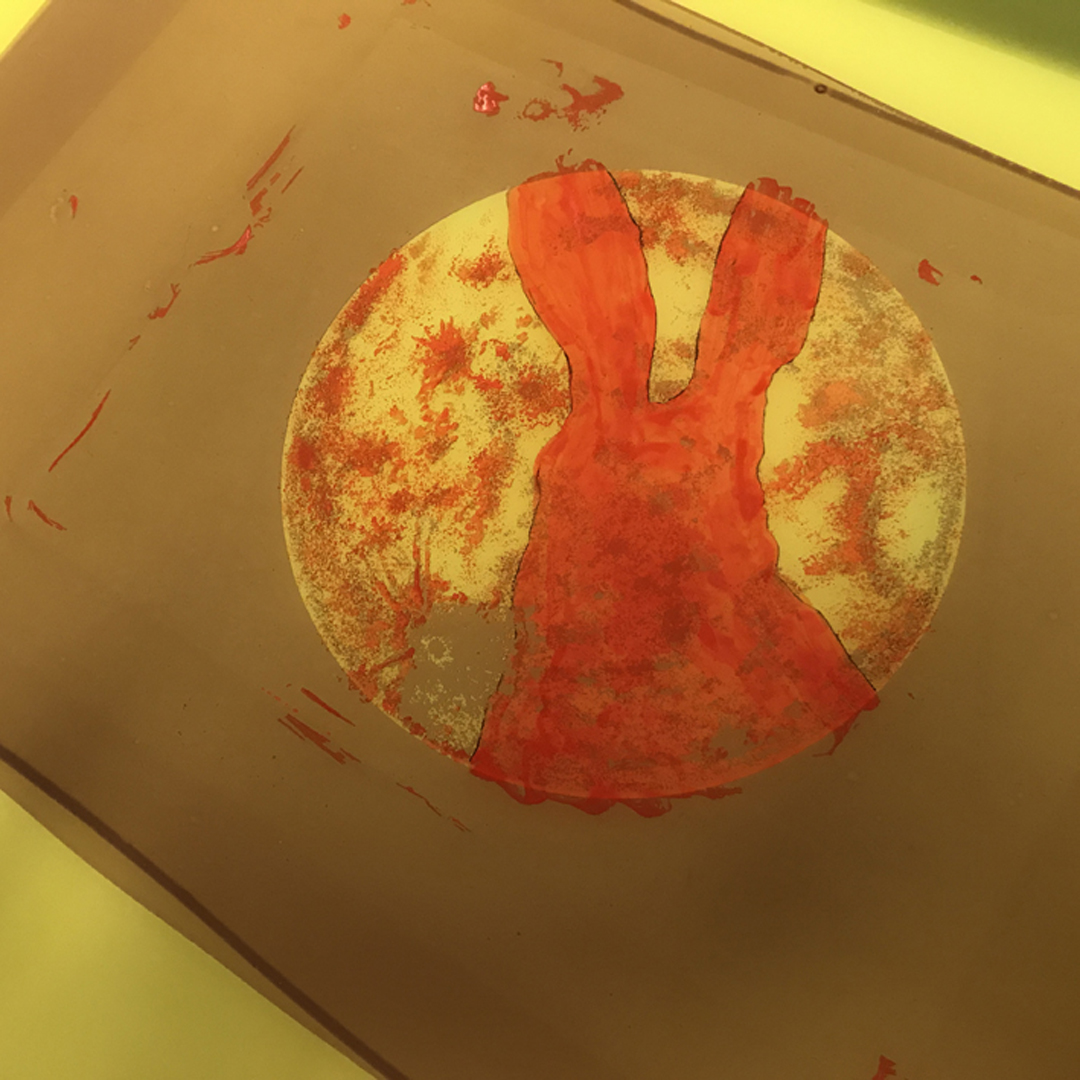 5. Then came a straightforward screen stencil for the blue background. I use this way of making screen print images all the time. Lascaux screen filler, although laborious to clean off once applied, can be painted, sponged, splattered etc in a variety of ways (usually to an accurate pencil tracing on the mesh) to block the mesh to make quick and direct stencils. By this time too, I was formulating some words that might go with the image, so stars were added. I was also beginning to think about Victorian ‘medieval’ decorative arts qualities that might suit here, so I made the blue brighter than I originally planned. 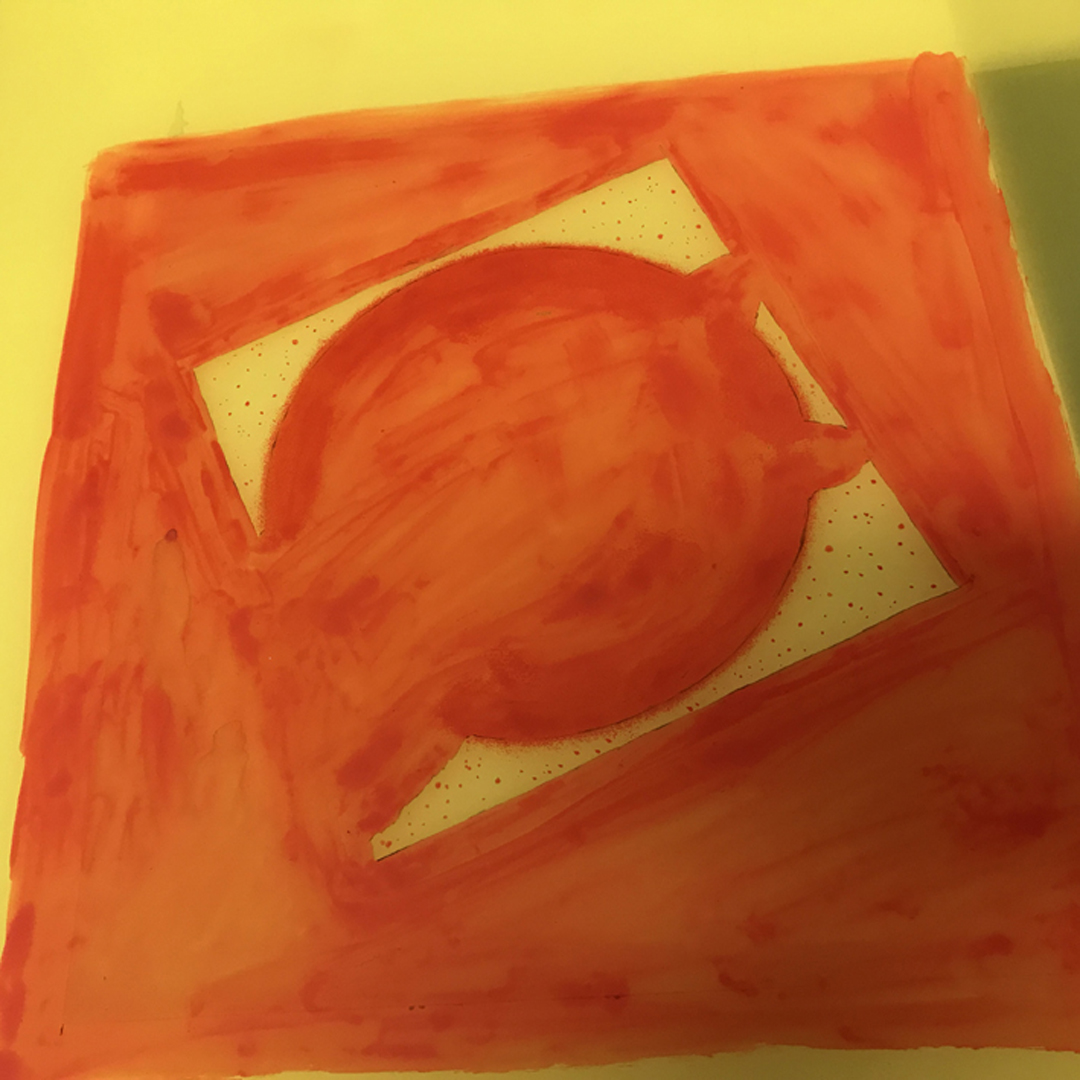 5. The background blue was another very simple hand painted stencil 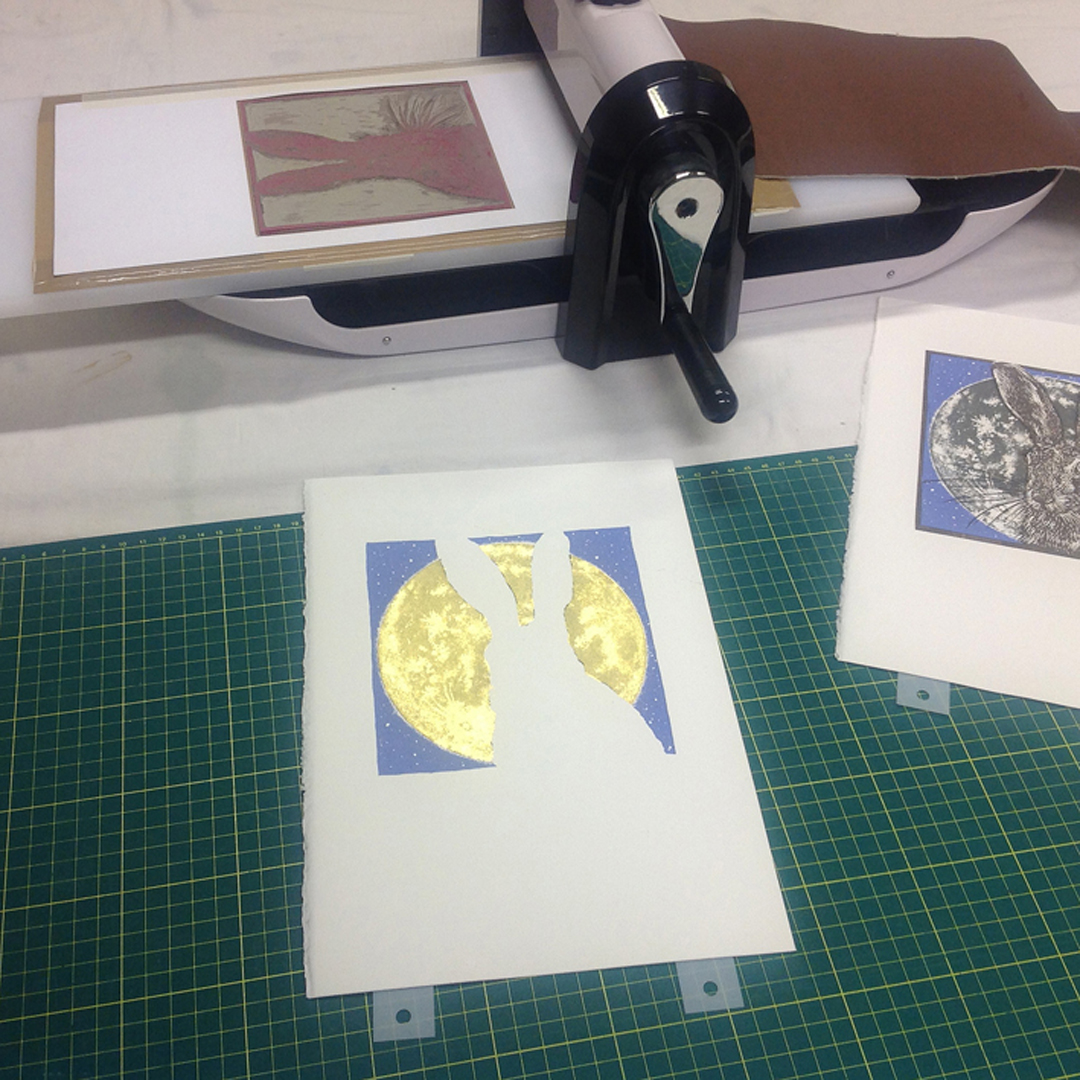 6a. After checking the registration system and a test print…

6. After checking the registration once more, I applied the carefully chosen transparent grey to just two of the gilded sheets. I had to wait 24 hours for them to dry completely (this screen ink dries very quickly indeed on a more absorbent surface) but the effect was successful, so all the rest were printed. 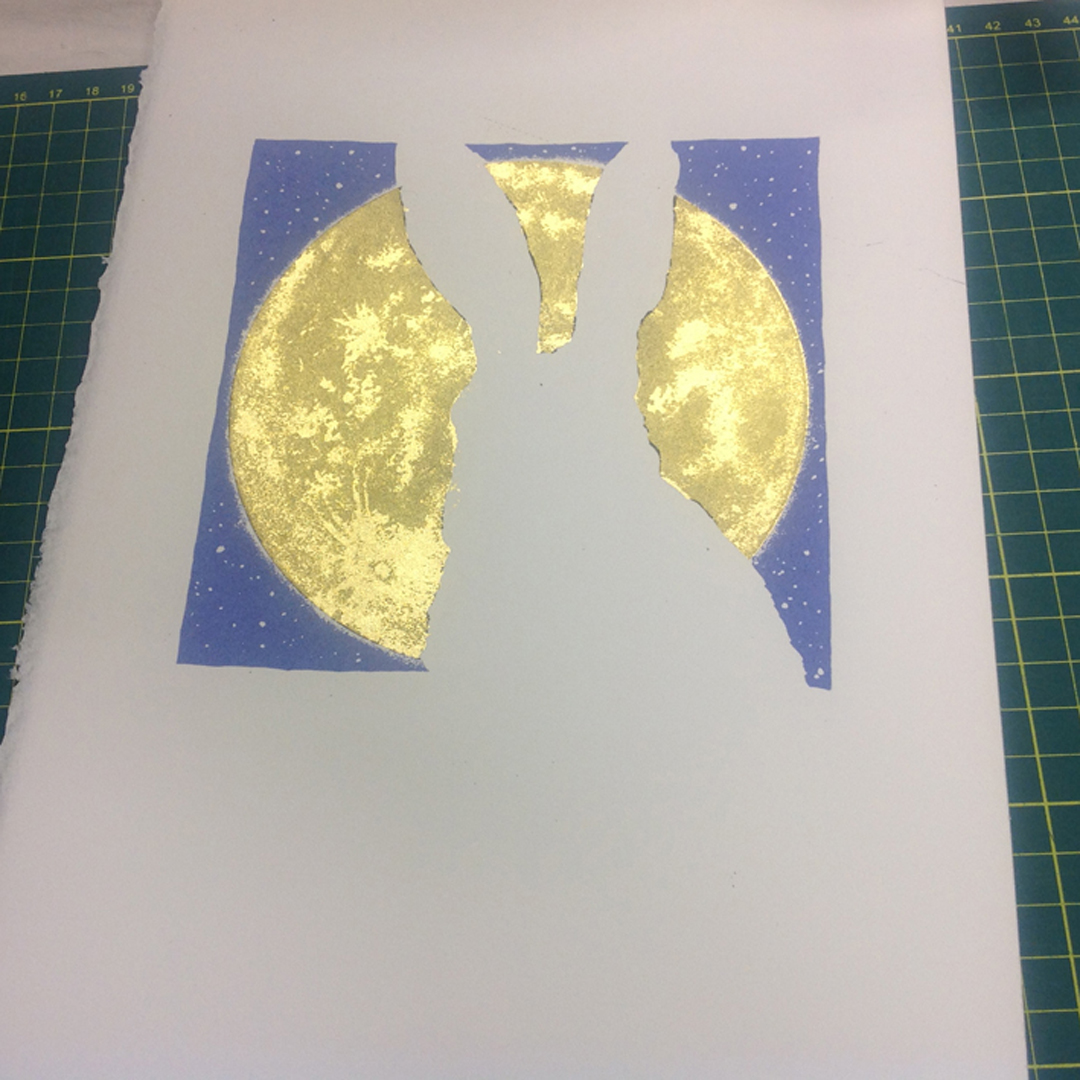 6b. All the gilded sheets were printed.

7. With the moon and stars complete it was time to return to the lino block and see if I could make the hare image strong enough to suit the background. ‘Reduction’ printmaking (printing all tonal stages from one block or stencil; physically reducing the print area after each colour – and no going back!) is always a leap of faith. But this was a fairly straightforward reduction from pale brown, through a slightly gingery brown, to almost black in four stages. The registration for such an image has to be spot on of course, or fine textural details, misprinted, give an awful ‘out of focus’ effect. 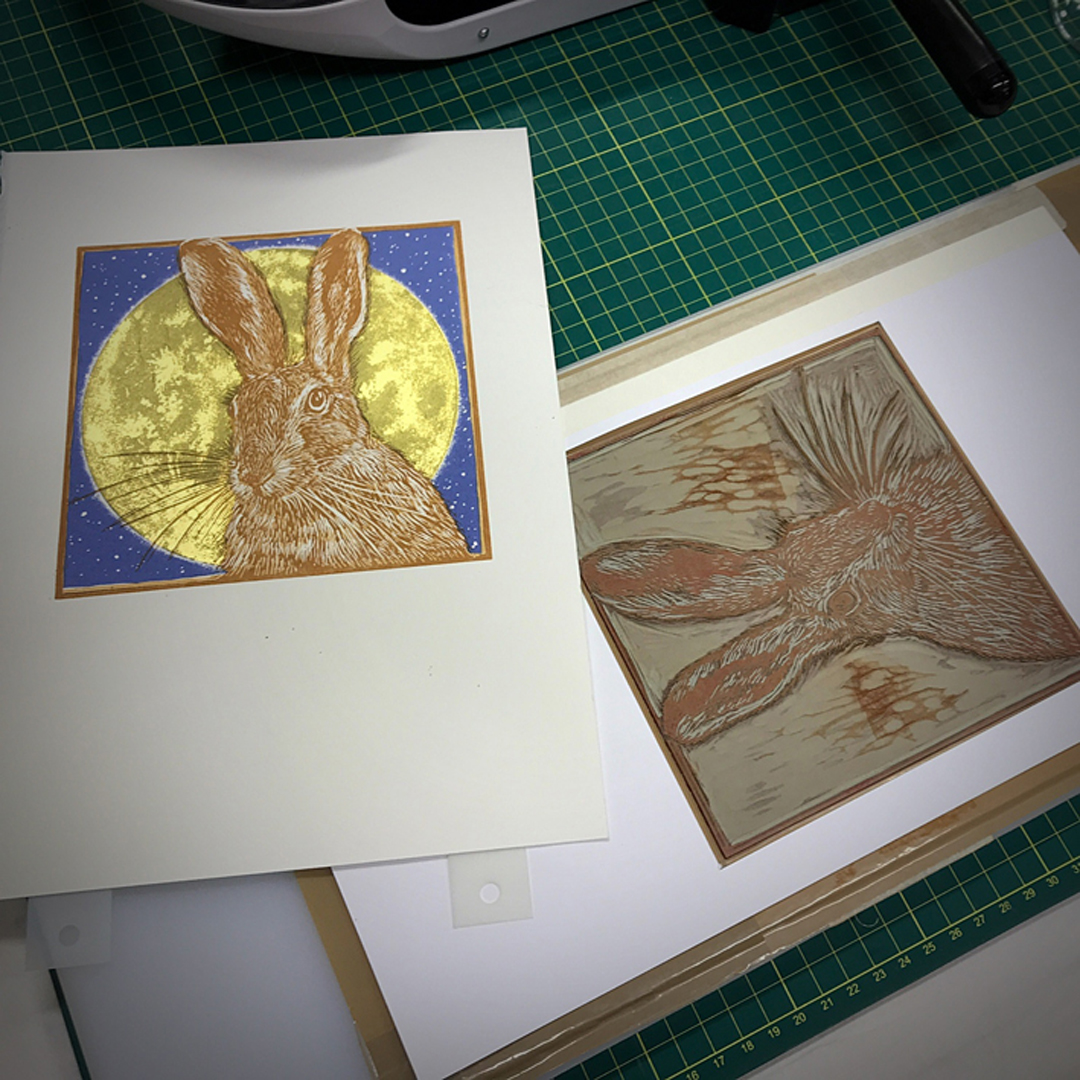 7. I was able to return to the lino block and begin a four stage reduction

8. I use Caligo Safewash ink almost exclusively; and I find that if used thinly and with plenty of extender (50 -90% depending on the image) the colours are still strong enough, but drying times are much reduced. Often between stages of a reduction I will also use a light dusting and very careful polishing off with ordinary cornflour on the previous layer(s) – done by using a padded dabber made of soft old cotton t shirt fabric; I dip it into a small dish of cornflour and dab gently on the tacky areas; then with another soft piece of the same soft cotton VERY lightly brush off any excess and lightly polish until the full colour returns. This does not dry the ink totally but enables stacking of the sheets and application of the next layer within a few hours.

But while waiting for each lino stage to dry, I got on with finalising and composing the type script. Options to include my words with my images are many and I have tried lots of ways. One possibility here was to surround the square, but as you can tell by the space under the image I’d already left, I decided to stick with my original planned position for the verse. Also by now, I was keen on hinting at a bit of a Victorian ‘Gothic’, look; so designed the text (using Photoshop) appropriately. Laying the photo transparency needed to make a screen stencil over the image gave me a good idea of whether it would work or not. 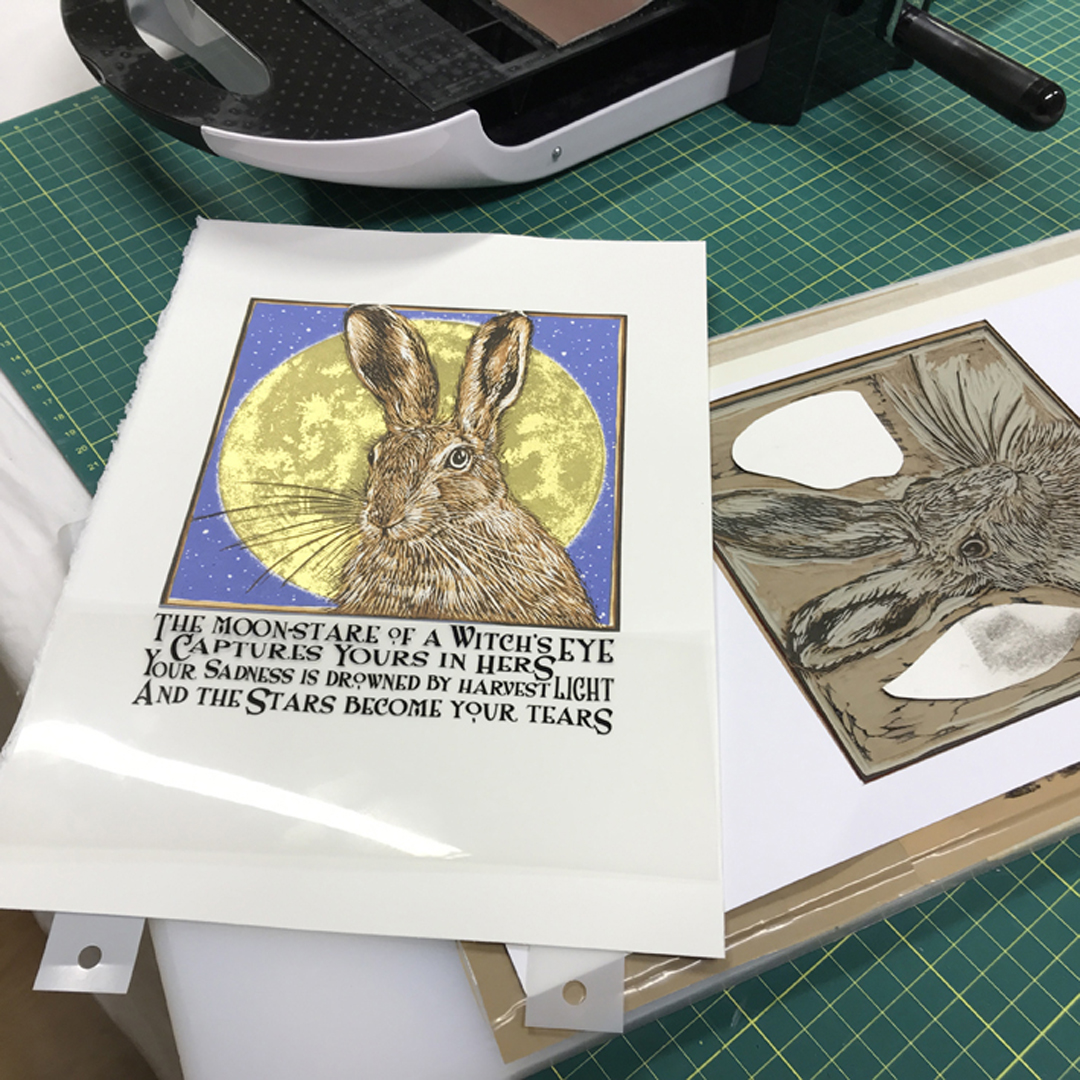 8. At the same time I began to think about how the words would look. 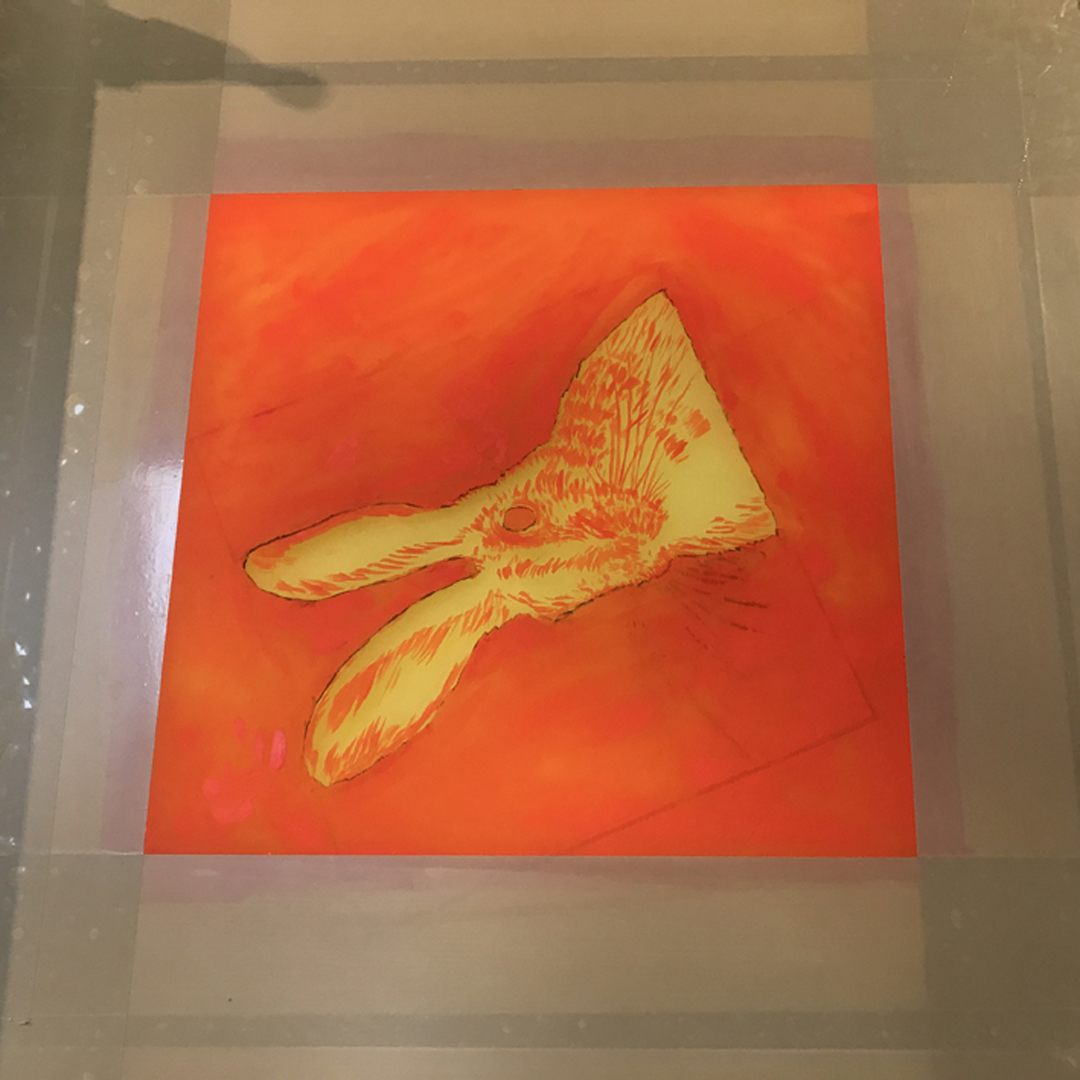 9a. A final layer or two of transparent colour was added with another hand painted stencil

9. The hare herself was OK, but as the original demo block was never planned as a reduction, clearly she needed some extra colour and tone. This is very simple and quick with two or three more hand painted screen stencils and some transparent colour. The final touch of the magic amber of her eye was added with watercolour. 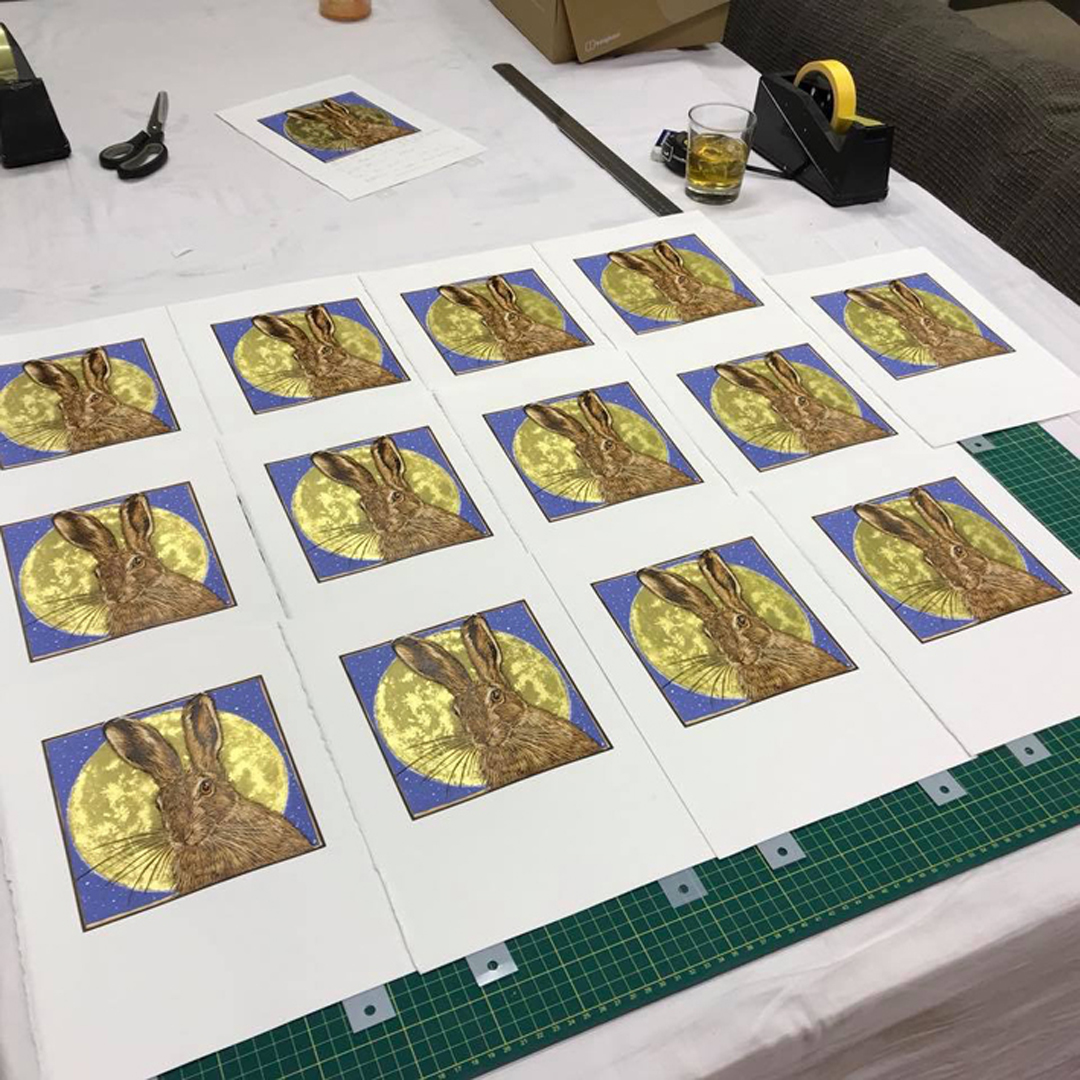 9b. And the main image was complete – with the loss of two of the sheets I began with.

10. So after a week or so’s work, I ended up with thirteen perfect prints ready to receive the verse. Rather than register two separate stencils to give me ‘medieval’ red capitals, I printed all the text first in red, then blocked out the ones to remain red and (trusting my registration!) overprinted in a semi-transparent black to give me dark sepia text for the rest. 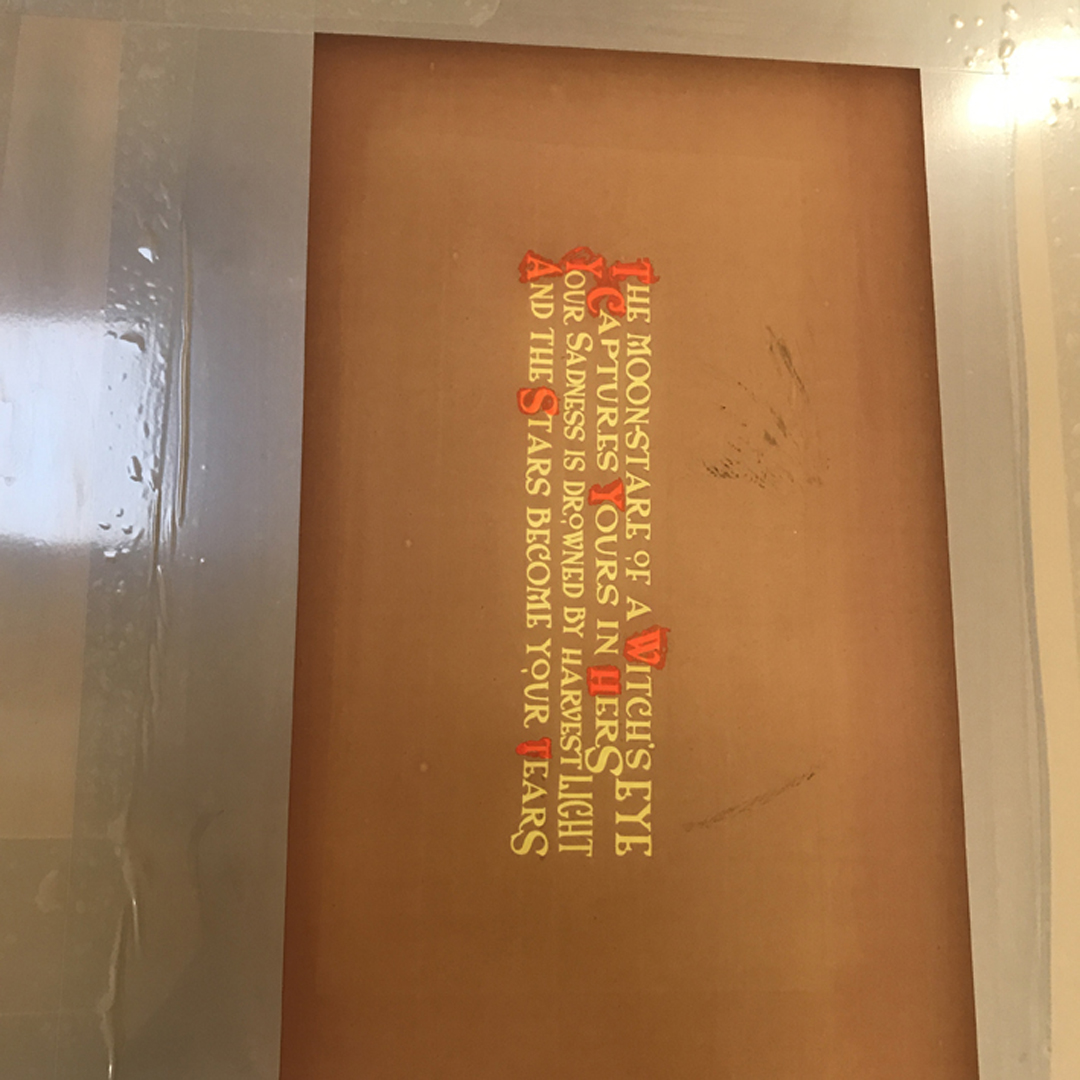 10. The lettering photo stencil was colour separated on the screen.

11. And the print is finished; signed and stamped. 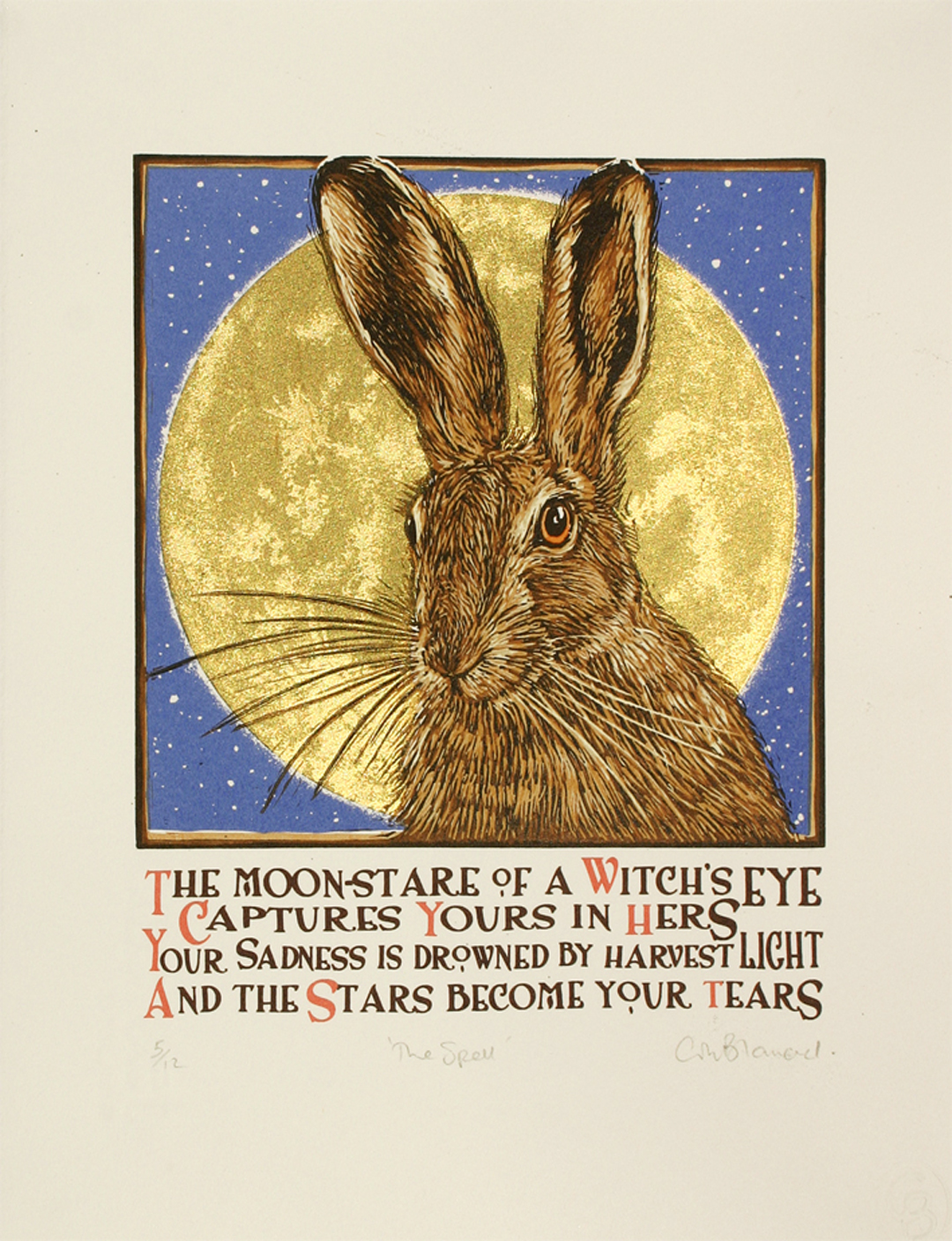 11. And the print was finished!

Footnote:
All but two of the final edition of twelve sold within 48 hours.
Wish I could get it right like that more often!

Since March, we have been sharing cues to spark cr

As part of our On Location series, last year we vi

Made from shredded boxes in our warehouse, our rec