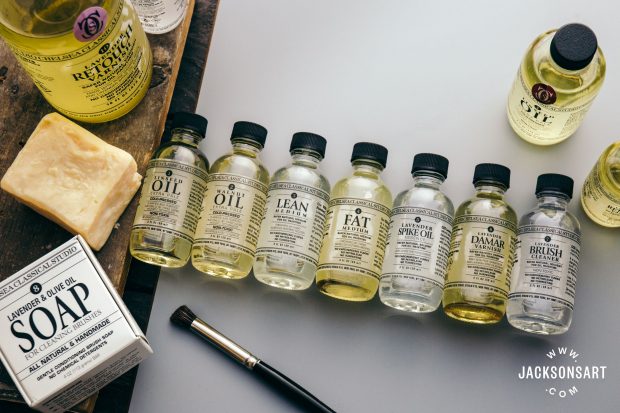 Chelsea Classical Studio was founded as an artist studio in New York by portrait artist Brandon Soloff. The success of the studio has seen it become a regular venue for workshops and life drawing classes over the past ten years.

As a result of running the studio, the group of artists developed a desire to gain a deeper understanding of the relationship between artists working in the studio and their materials. Many of the teachers and students felt that it was difficult to know exactly what they were buying when it came to art materials. Beginner artists were intimidated by the variety of art materials available, many of which claim to do the same thing at dramatically different prices.

In response to these concerns and with a wealth of expertise to aid their cause, Chelsea Classical Studio decided to produce a range of high-quality art materials, complete with transparent information on the packaging that explains exactly what they are offering. 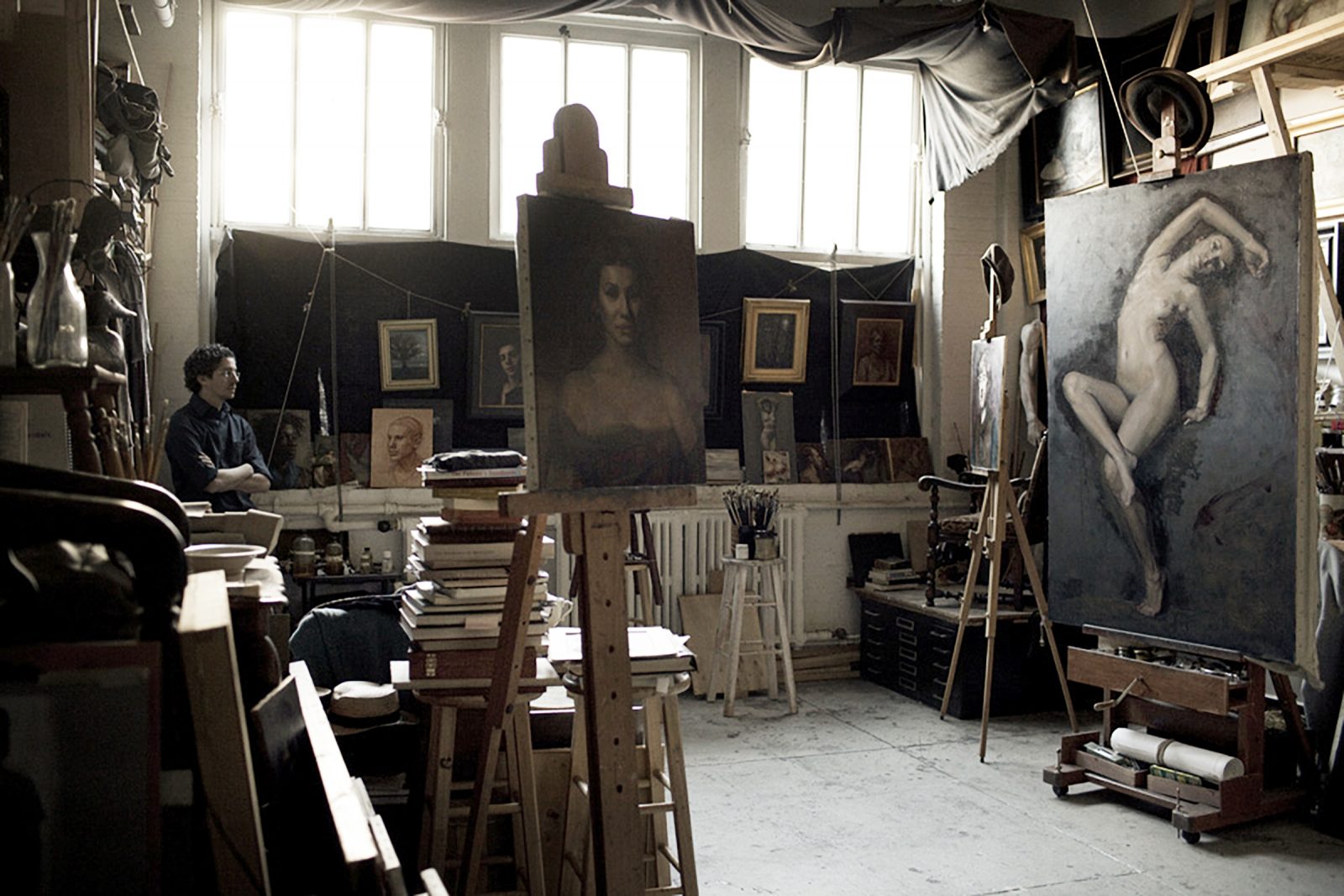 1. Producing paler, faster-drying linseed oil. Artists have often wanted to work with the most colourless oil possible, like the pale oils described in old manuscripts. Since many oils on the market today are chemically alkali-refined, slow-drying, and have a tendency to yellow, Chelsea Classical Studio wanted to adopt traditional methods to create a higher grade linseed oil.

2. Re-introducing lavender spike oil to artist’s studios. Used since the Renaissance, lavender spike oil serves the same function as turpentine but doesn’t cause side effects such as headaches, is much kinder to the lungs and skin, and has a pleasant fragrance.

3. Simplifying the complexities surrounding mediums in order to solve basic painting issues. A better understanding helps people have greater control over drying, adhesion, permanence, and the material composition of their painting.

Chelsea Classical Studio linseed and walnut oils are cold-pressed and naturally clarified and purified by hand using historic techniques. This process is used to make oils that dry faster and yellow less. They are non-toxic and contain no additional chemicals. 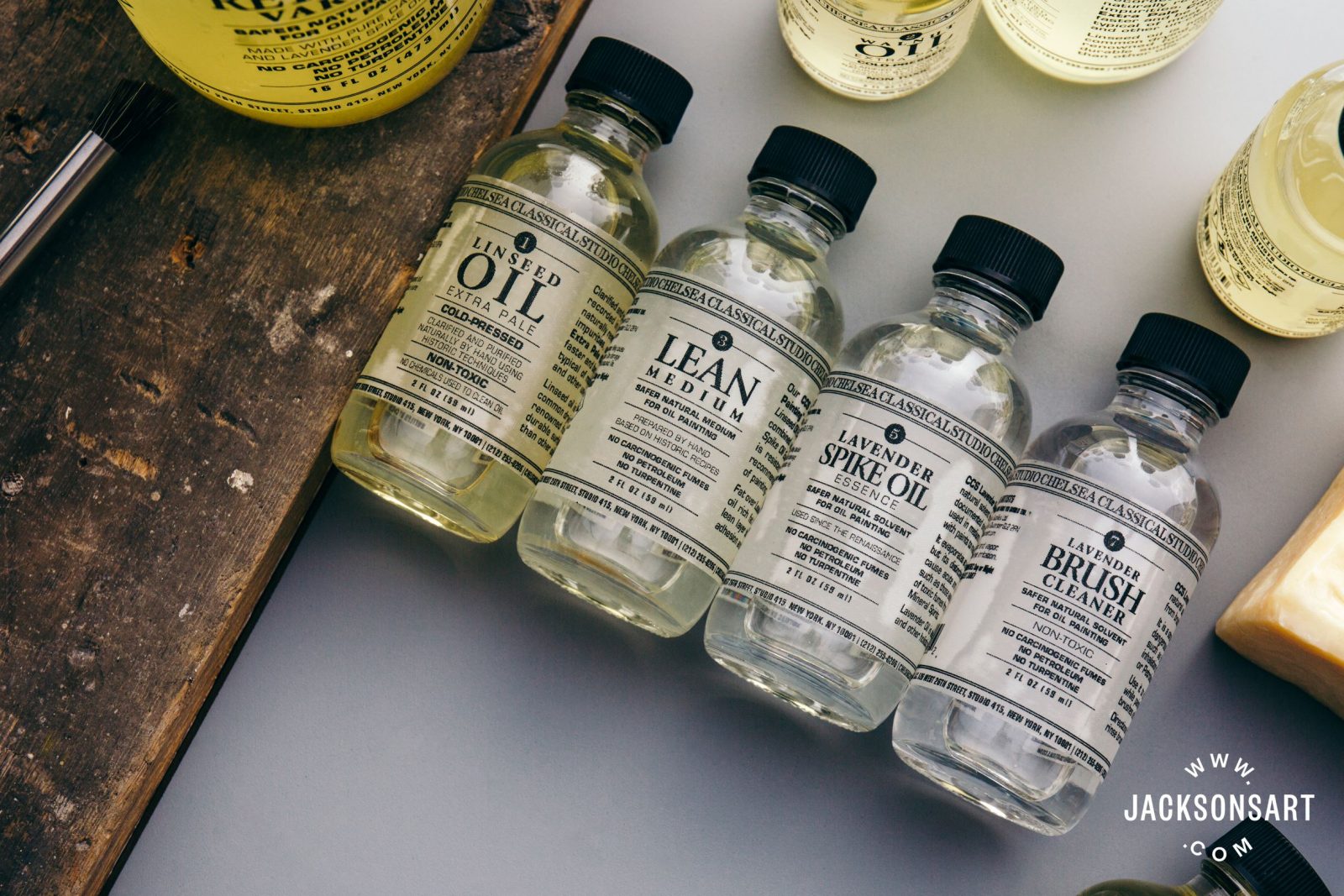 What makes Chelsea Classical Studio oils different from other oils?

Most oils available on the market are alkali-refined. The process of alkali-refining is a complex one that involves treatments that use bleach, sodium hydroxide and heat—all of which are necessary to optimise the colour and re-wetting abilities of the oil.

Chelsea Classical Studio opts for a traditional means of manufacture. They take raw, cold-pressed linseed oil and use a centuries-old process of purifying it using only water and minerals, without heat and chemicals. The process takes three months, during which half the oil is lost, but because it has not undergone a chemical process the end product is lighter and dries faster.

Traditionally, cold-pressed oils have been considered more effective for grinding paint. This is because they have a higher total acid number, which tends to coat pigments more effectively than oils with a lower total acid number. If you make your own oil paints in the studio, you may find milling pigments by hand is easier with this vehicle. While modern alkali-refined oils are available with a variety of acid numbers, cold-pressed oil will always appeal to those who prefer to avoid materials that have undergone chemical processes, and wish to work with the same oil that painters centuries before them would have used.

Differences between linseed and walnut oil

Linseed and walnut are among the two main oils used in oil painting. Linseed is known to dry faster and stronger, whereas walnut is slower drying, more fluid, and is often paler. For these reasons, many artists might use linseed oil for warm colours and reserve walnut oil for paler, cooler colours. That being said, Chelsea Classical Studio Linseed Oil is paler than their Walnut Oil because of the nature of their refining process.

Lavender Spike Oil Essence is the essential oil of spike lavender. Despite its name, it is a solvent and can be used to thin oil paint. Its use has been documented since the Renaissance and it was commonly used by artists, including Jan Van Eyck. Research has shown that oil of spike lavender is non-carcinogenic and is significantly kinder to the skin and respiratory system than turpentine or mineral spirits. In the twentieth century, spike oil was largely abandoned in favour of less expensive turpentine and odourless petroleum mineral spirits, both of which have
since become the most common painting solvents.

Lavender spike oil mixes well with oils and when used in painting mediums provides great control and adhesion. It evaporates at a similar rate to turpentine and faster than odourless petroleum mineral spirits. As well as thinning oil paint, it is also strong enough to fully dissolve resins.

Although it is less toxic than other solvents, it is still highly concentrated and care should be taken when using it; avoid excessive contact with skin and use only in well-ventilated areas. As the name suggests, lavender spike oil has a strong distinctive scent—a mix of lavender and eucalyptus—which is why its other main use is in aromatherapy. 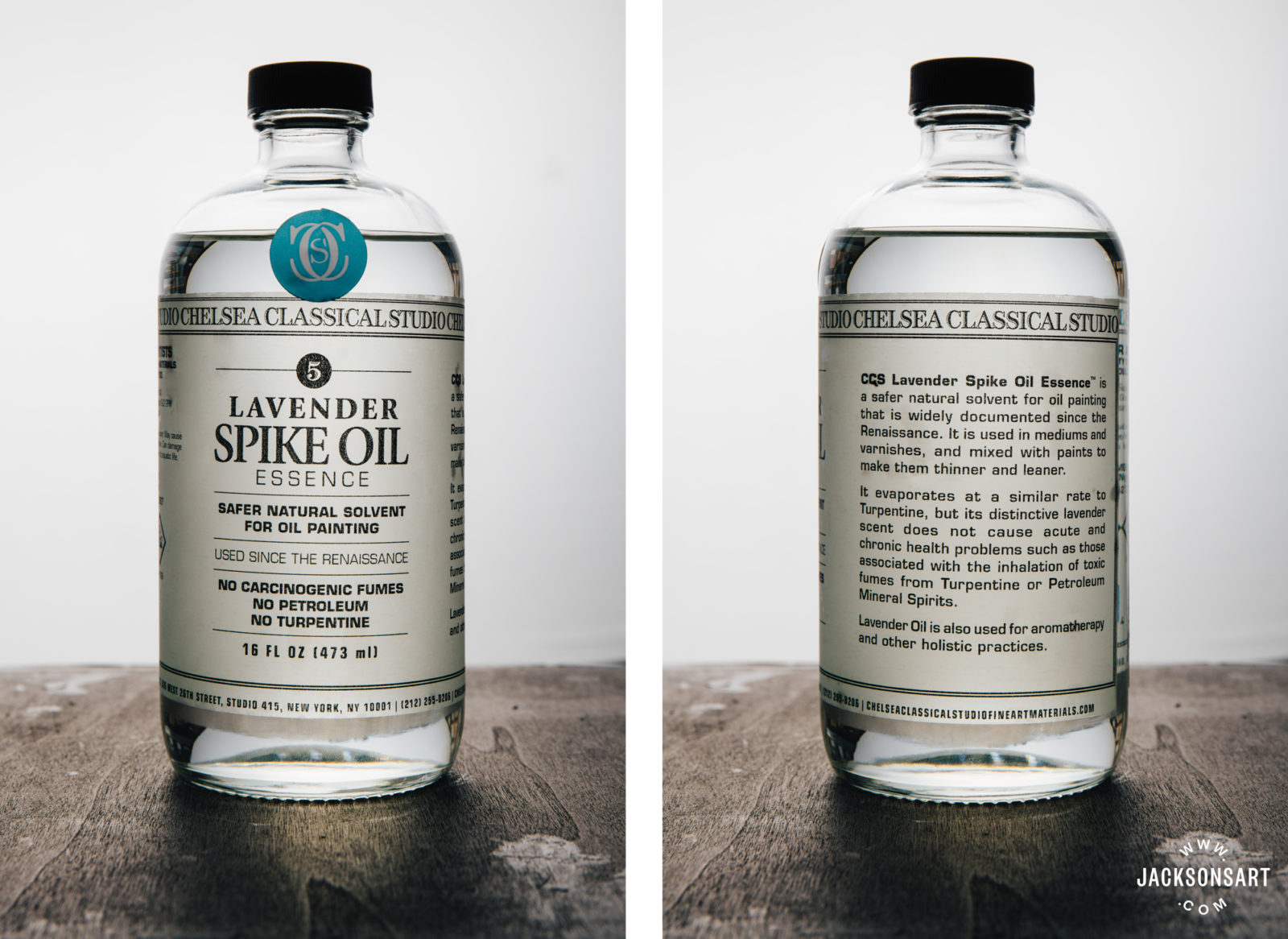 It’s important to follow the fat-over-lean rule when painting in oils. Always apply layers of paint with a greater proportion of oil, or fat, over the top of lean layers of paint—those with less oil content. This ensures a good bond is achieved between layers and gives the opportunity for each layer of paint on the canvas to dry fully.

Additionally, layers of paint need to have enough oil in them to bind the pigment and make them permanent when they dry. If there is not enough oil in the paint, it’s possible that the solvent found in a final picture varnish may remove the top layer of colour when it’s brushed on.

Varnish can be used to protect a painting from dust or dirt, or alter the sheen of the paint surface. Varnishes with a lower concentration of resin are known as retouching varnishes and can also be added to painting mediums to make them stickier, shinier, and faster drying.

Chelsea Classical Studio varnishes are made with Lavender Spike Oil Essence and natural dammar resin. Their retouch varnish is made from 3/4 spike oil and 1/4 dammar resin and can be used throughout the course of the painting. The thin retouch varnish layer allows the paint to continue its deep drying and avoid cracking.

Their dammar varnish is made from 2/3 spike oil and 1/3 dammar resin—it is a final picture varnish but can also be added to mediums in smaller quantities to make them fatter, stickier, shinier, and faster drying. 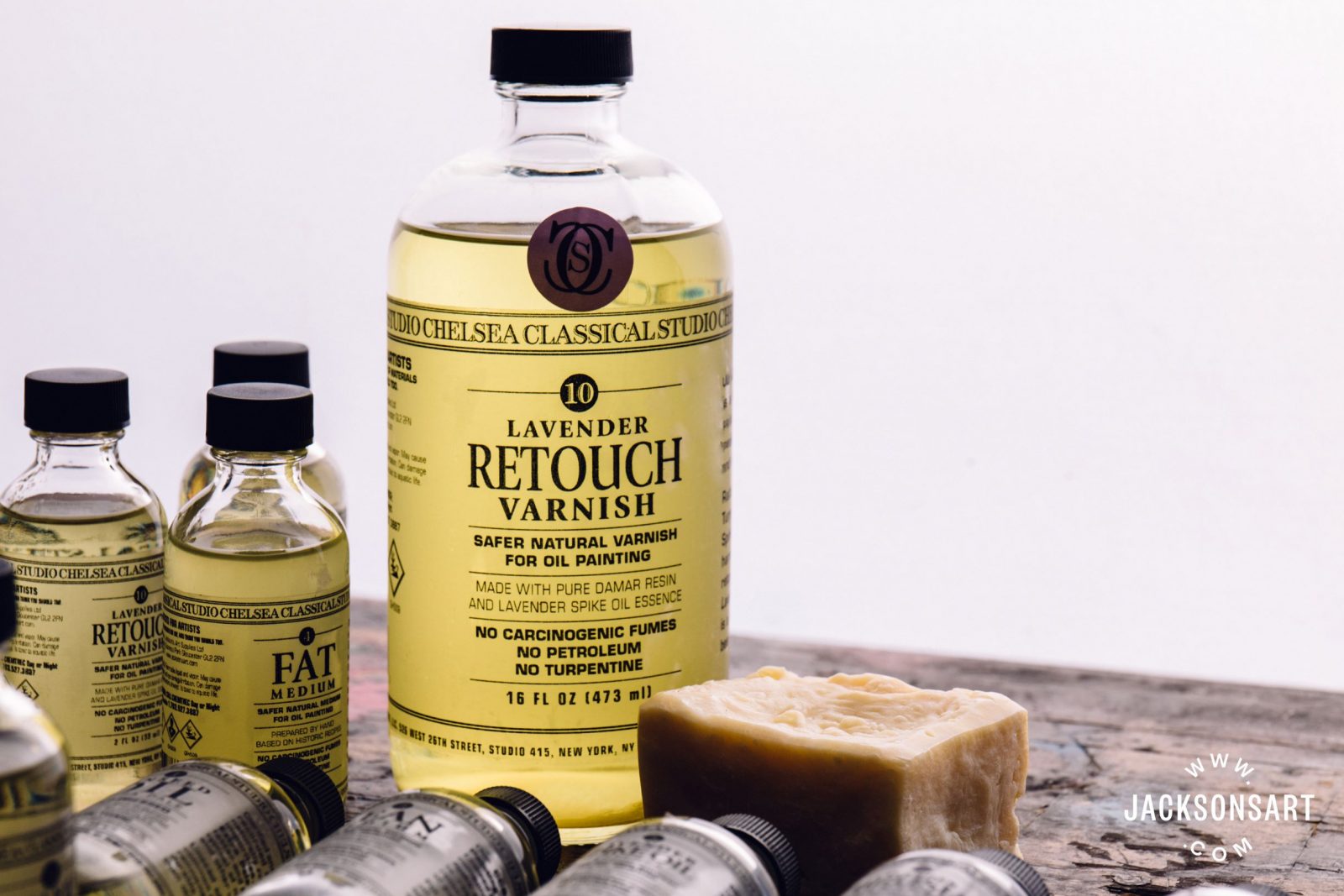 Taking care of your brushes properly can save you time and money, and good quality brushes can last a lifetime if treated well. Chelsea Classical Studio have produced two natural, non-toxic brush cleaners to help maintain the quality of artist brushes. They clean brushes and palette knives easily and are less abrasive than turpentine or spirits. After cleaning with solvent, artists can use Lavender & Olive Oil Soap to further clean and moisturize the brush hairs and to make them perform better and last longer.

The Lavender Brush Cleaner is derived from lavender, not spike lavender. The Citrus Essence Brush Cleaner is made from 100% distilled orange rinds. Both are solvents and they evaporate as typical artists solvents would. Both brush cleaners are non-carcinogenic and they clean like odourless petroleum mineral spirits but without the harsh odours. They are better for brush hairs and the mixture can be reused day after day, even when it starts to look murky.

With a background in photography and painting, Daniel conducts artist interviews and writes features and exhibition articles. He enjoys gaining insight into how artists make and exhibit their work. Daniel studied at the University of London, specialising in Literature, History and Art.

How vibrant are these violets by @terryludwigpaste

The oceans, skies and seascapes that you could cre

Our pastel paper ranges include some wonderful ear

Iris is a rotary compass tool created by @makersca

Titanium White No. 1 is the most brilliant white i