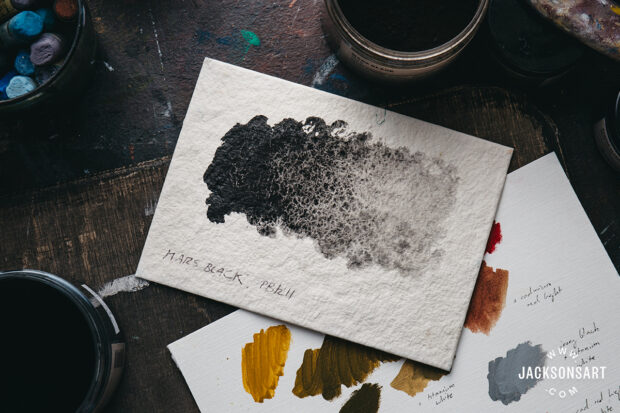 Pigment Stories: Black Pigments, and Getting the Most Out of Using Black in Your Palette

Of all the artist colours, black may well have the longest history. Charcoal, soot, and charred animal bones were used in the earliest prehistoric cave paintings. Today, there are a number of black pigments available to artists, and many paint ranges include more than one. In this article, I compare the different properties of the most commonly used black pigments, as well as suggest some ways that black can be used in an artist’s palette.

What Are the Differences Between Black Pigments?

The pigment index number, which indicates the chemical composition of the pigment, can give an indication of the characteristics of the colour.

PBk9 tends to be semi-opaque to semi-transparent and it is usually lower in tinting strength than the other carbon-based black pigments. For this reason, it is great for mixing This pigment’s uniqueness lies in its warmth – it often has a yellow or brown undertone which can be seen in glazes, and in tints with white. As the name suggests, Ivory Black was originally made by carbonising ivory. While this is no longer the case, any black paint containing the pigment number PBk9 is produced from animal bones, which is something to bear in mind if you wish to avoid animal products. 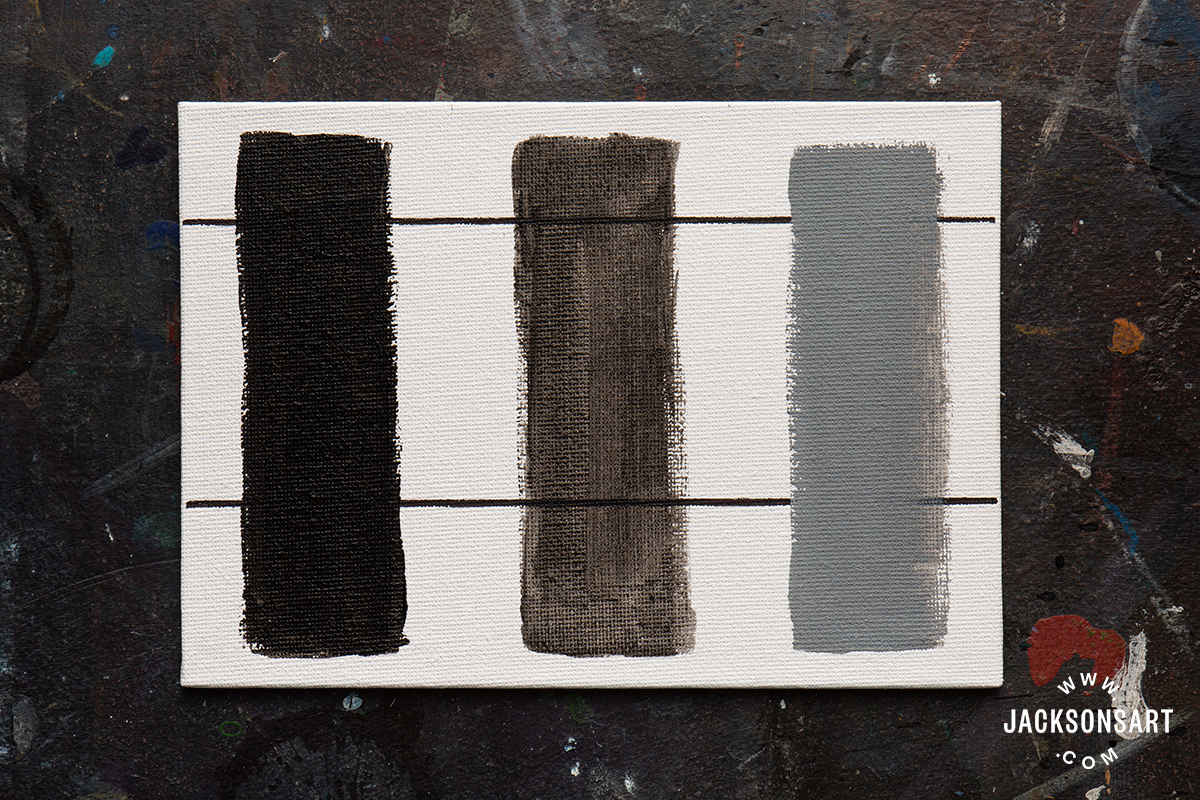 Today, PBk7 is made today by burning coal or natural gas, but is traditionally derived from carbonising plant matter, like in the production of charcoal. Paints made with PBk7 are usually very opaque and have a high tinting strength thanks to the small, dense pigment particles. PBk7 can range from neutral to cool in temperature.

Lamp Black used to be made using the sooty residue collected from oil lamps, but today it is made from the burning of gas or oil. It is a semi-opaque to opaque, intense black with a high tinting strength. PBk6 often has a cool undertone, giving a bluish-grey when mixed with white.

Both PBk6 and PBk7 are made with almost pure amorphous carbon and have very similar properties. In fact, many paints that are labelled as Lamp Black are made with PBk7. Below is a comparison of PBk7 (top) and PBk6 (bottom), and you can see the similarity in opacity, tinting strength, and temperature. 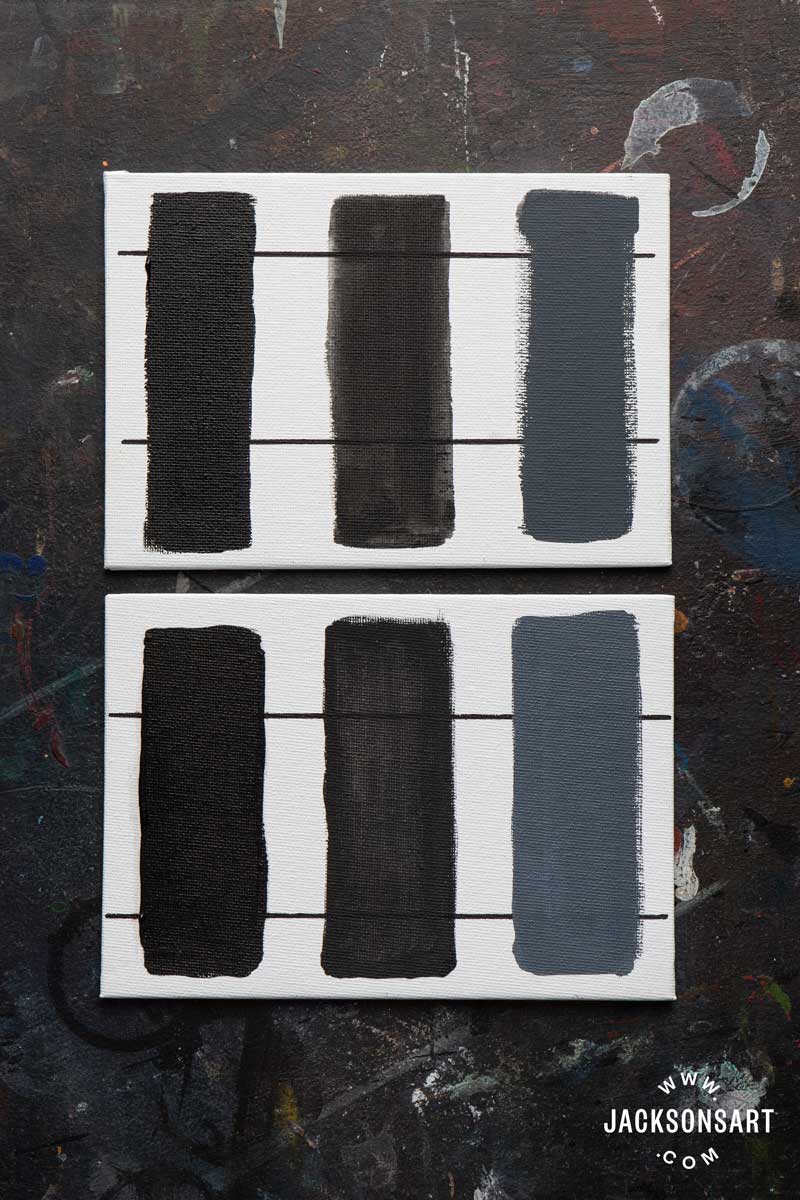 Mars Black is different to all of the previously mentioned black pigments because it is not carbon-based. The Mars family of pigments, which also includes Mars Yellow and Mars Violet, are synthetic iron oxides and were developed in the 20th century as alternatives to natural earth pigments. Mars Black, along with Carbon Black, is one of the most opaque of the black pigments, so it is ideal if you need good coverage. It is often warm in undertone, and in mixtures it has a high tinting strength and can easily overwhelm other colours. 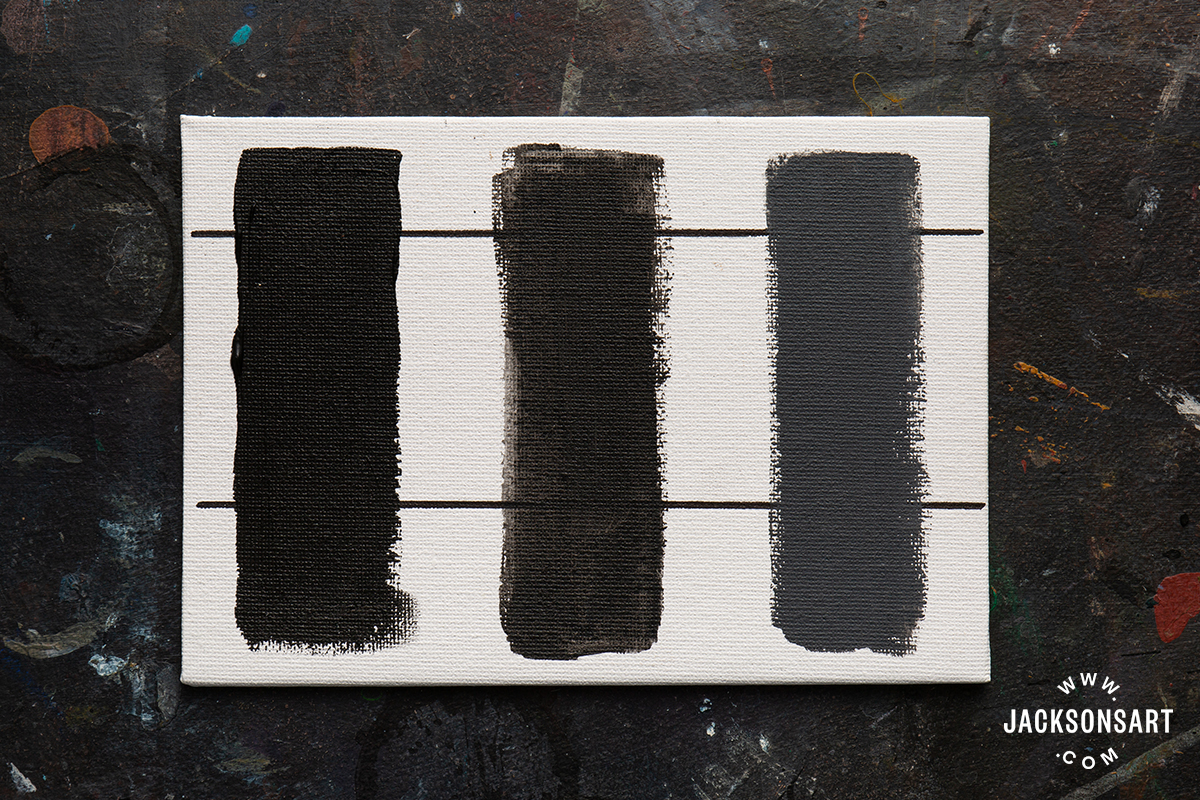 Mars Black dries much faster than the carbon-based black pigments, so it is better suited to underpainting than Lamp Black, Carbon Black, and Ivory Black. In watercolour, PBk11 is a very granulating black pigment. 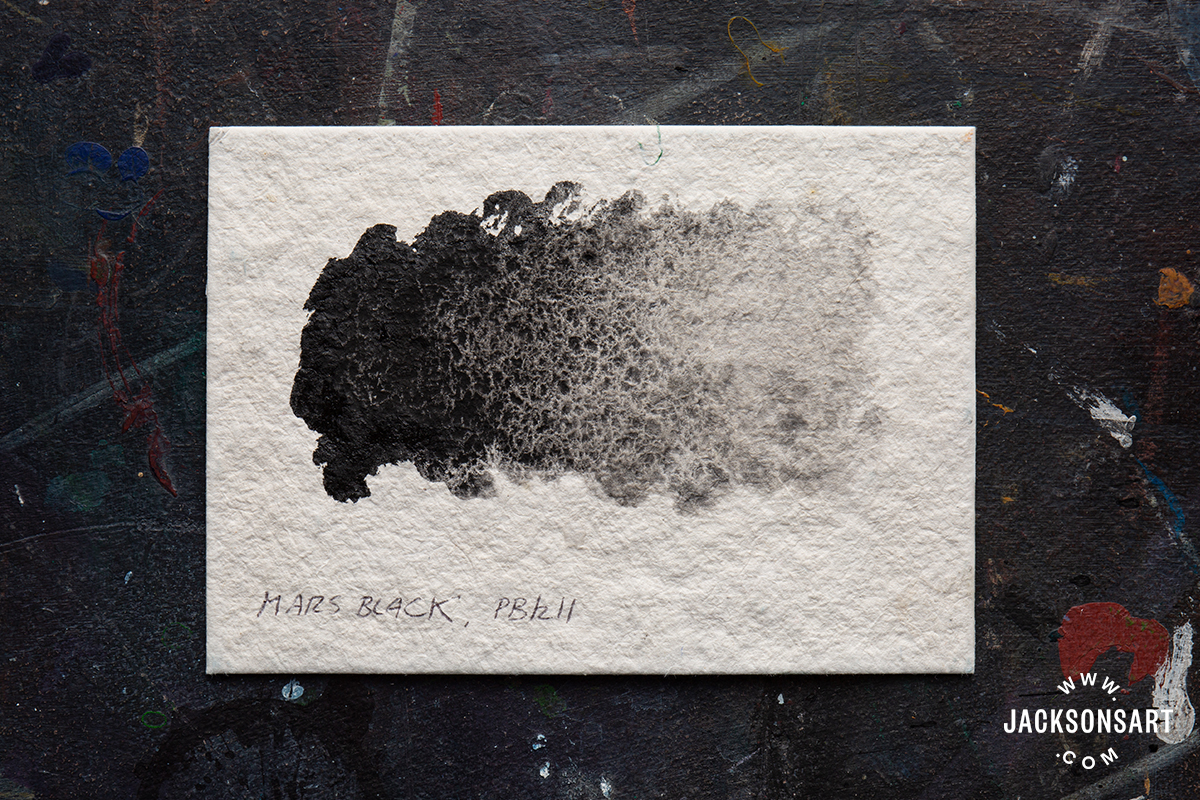 It’s worth remembering that not all black paints will have the corresponding names and pigment numbers. I found, for example, paints named ‘Ivory Black’ with different pigment index numbers (PBk9, PBk6, PBk7, or a mixture). Characteristics like opacity and temperature can vary depending on the binding medium and how the pigment has been processed. If you find that your black paint isn’t as cool or warm as you’d like when used straight from the tube, then you can easily adjust it. If you want your black paint to be cooler, then adding a touch of blue will give it a cold undertone. Likewise, a touch of a warm earth colour, like Raw Umber will warm it up.

How Useful is Black in a Palette?

Whether black is a necessary colour in a palette can be a subject of disagreement among artists. It has a reputation for making ‘muddy’ mixtures and for dominating the other colours in a painting, especially when used neat. Some artists choose to mix chromatic blacks for the very darkest values in their painting (for example, Ultramarine Blue and Burnt Sienna, or Viridian and Quinacridone Magenta make a deep, near-black), instead of using tubed black paints. There is a well-known story about Claude Monet and John Singer Sargent going painting together. Monet recalls in his writings that Sargent needed to borrow his paints, and was horrified by the lack of black in his palette. “I gave him my colours, and he wanted black,” Monet writes, “and I told him ‘but I haven’t any,’ ‘then I can’t paint’ he cried, ‘how do you do it?’”

This story underlines the fact that some artists, like many of the Impressionists, avoided using black in their palettes, while others find it indispensable.

Black is certainly useful for making muted, subdued mixtures like those above, but another one of its strengths is creating surprisingly vibrant greens when mixed with yellow. With a cool yellow, like lemon yellow, it can create acidic, almost fluorescent, greens. With a warmer yellow, like Cadmium Yellow Medium, it makes golden olive greens. An orange-yellow, such as Cadmium Yellow Deep, makes some natural browns. This can make black a surprisingly useful addition to a landscape palette. 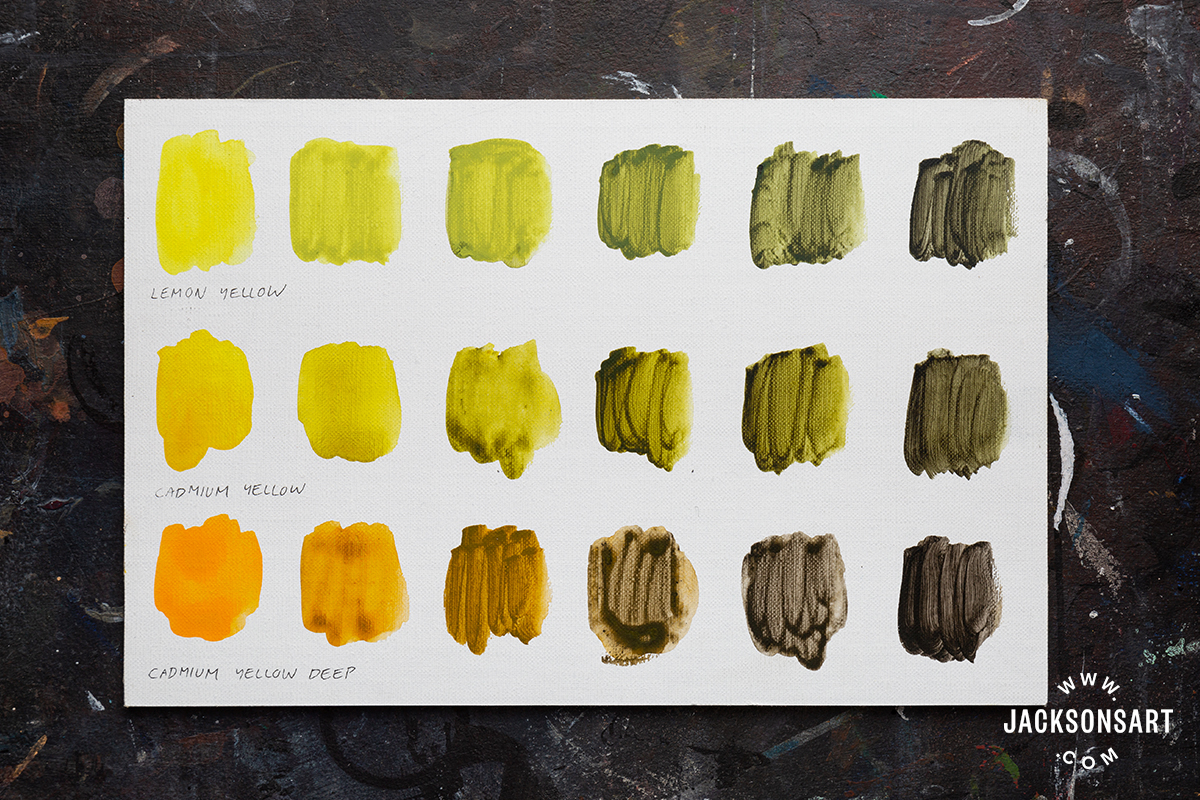 The Zorn palette is a well-known example of black taking a central role in an artist’s palette. Used by Swedish artist Anders Zorn (1860–1920), it consists of only four colours; Ivory Black, Flake White (which can be replaced with Titanium White), Yellow Ochre, and Vermillion (a historical pigment which can be replaced with Cadmium Red Light). Using a limited palette, such as this one, is a way of creating visual harmony throughout a painting. The Zorn palette is unusual because of the absence of a blue pigment, but it’s interesting that within the context of the other colours, the mixture of Ivory Black and Titanium White looks very blue. 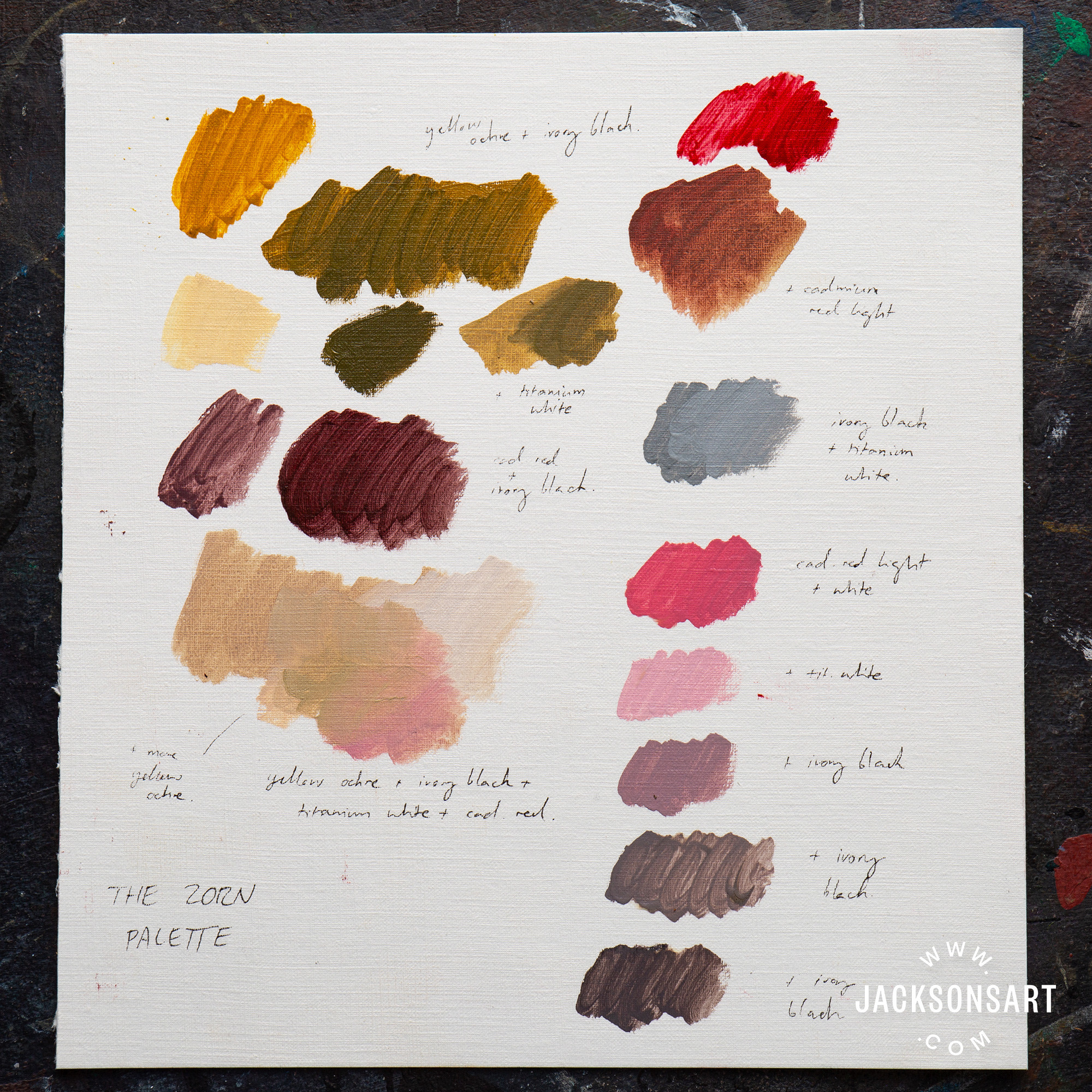 We’d love to know how you use black in your palette. Let us know by leaving a comment below.

Other articles about colour on the Jackson’s blog: