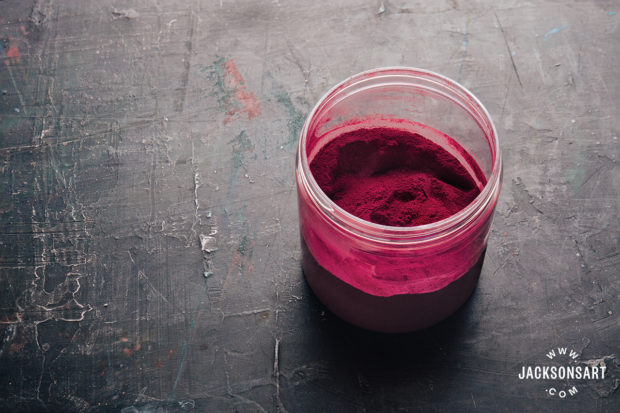 Alizarin crimson (pigment index number PR83) is a synthetic lake pigment which was developed as a replacement for madder lake, a historical pigment used since antiquity. It is a deep, cool red with a high tinting strength and, despite concerns about its lightfastness, many artists find the colour indispensable.

The History of Alizarin Crimson

The history of alizarin crimson begins with the madder plant. The natural red dye, made from the root of the madder plant, was first used to dye fabrics over 3000 years ago and it was one of the first dyes to be made into a lake pigment. Lake pigments are created by fixing a soluble dye to a mordant – an inert, colourless substance (usually a metallic salt). The result is an insoluble pigment, suitable for grinding into a binder to make paint.

Madder lake, also known as rose madder, is a fugitive pigment that was used extensively during the Renaissance. As the popularity of oil painting spread, its transparency made it ideal for glazing techniques. In the nineteenth century, madder became the first natural dye to be produced synthetically. The synthetic dye, called alizarin crimson, was much cheaper to produce than rose madder. For artists, it was a better alternative to rose madder because of its improved lightfastness and higher tinting strength. 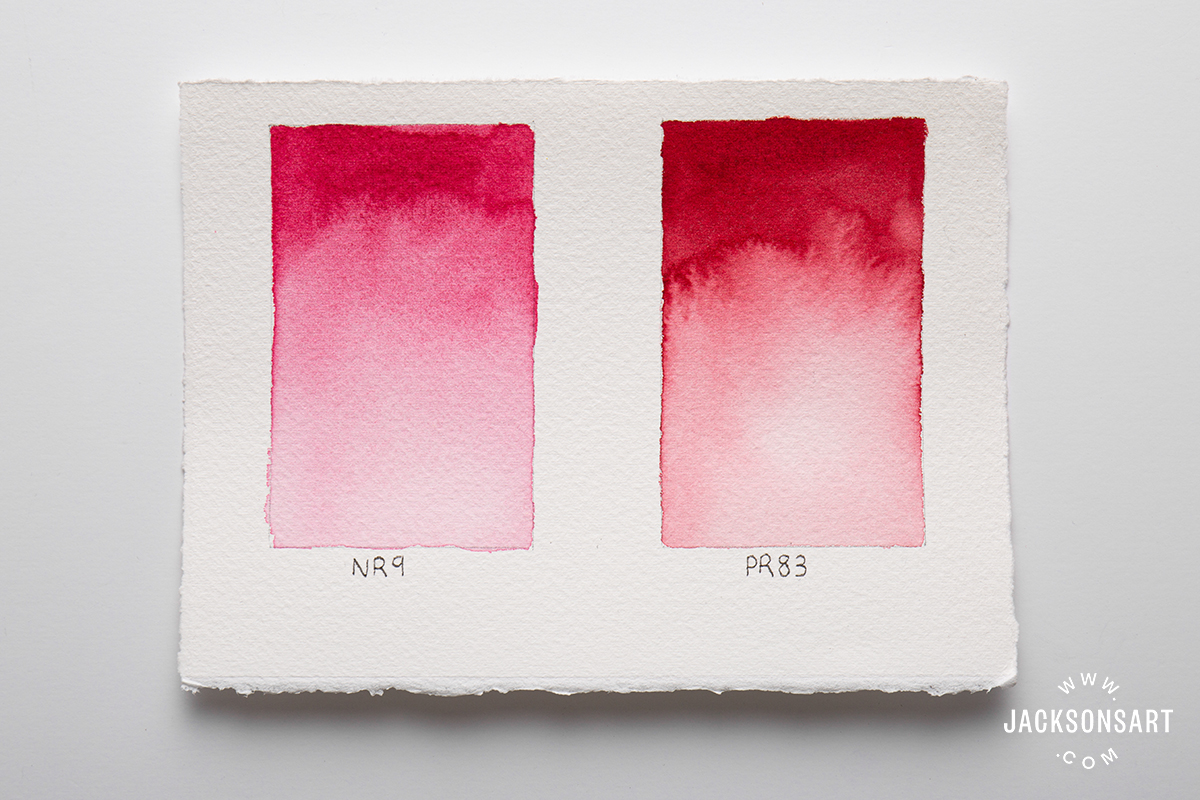 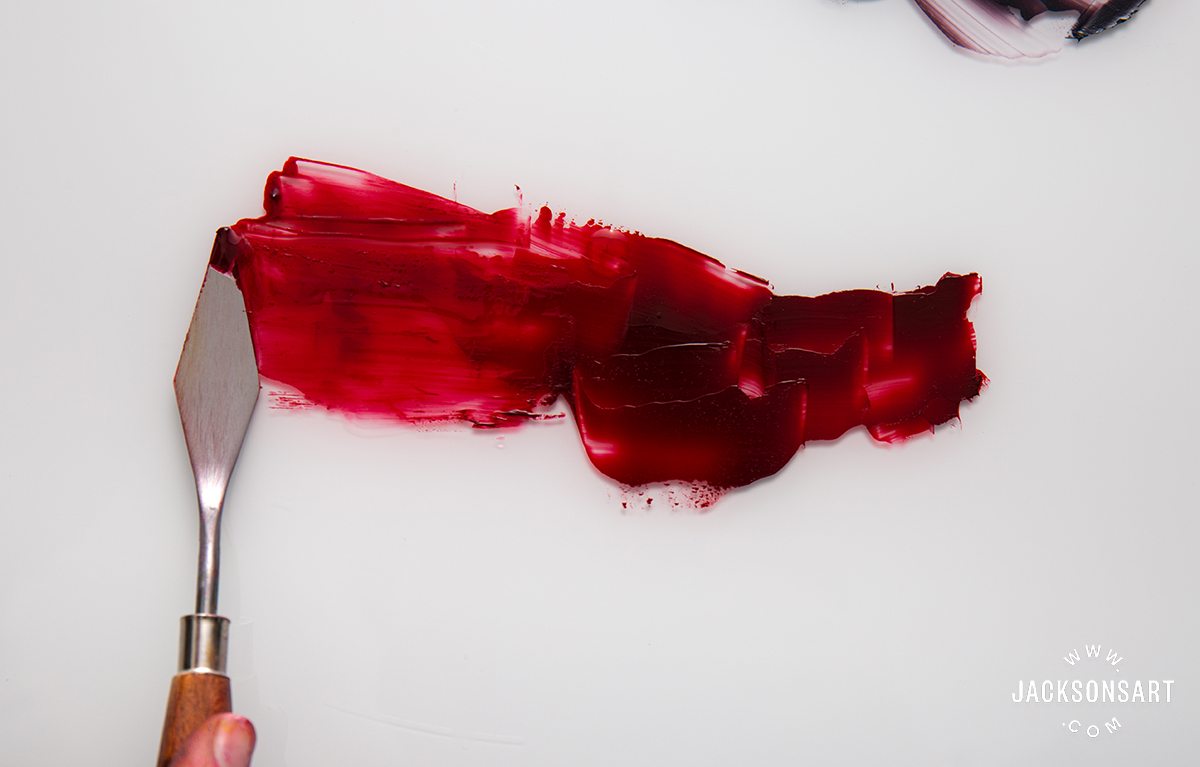 Because of its blue hue, it is easily persuaded to make dark maroons and purples with ultramarine blue: 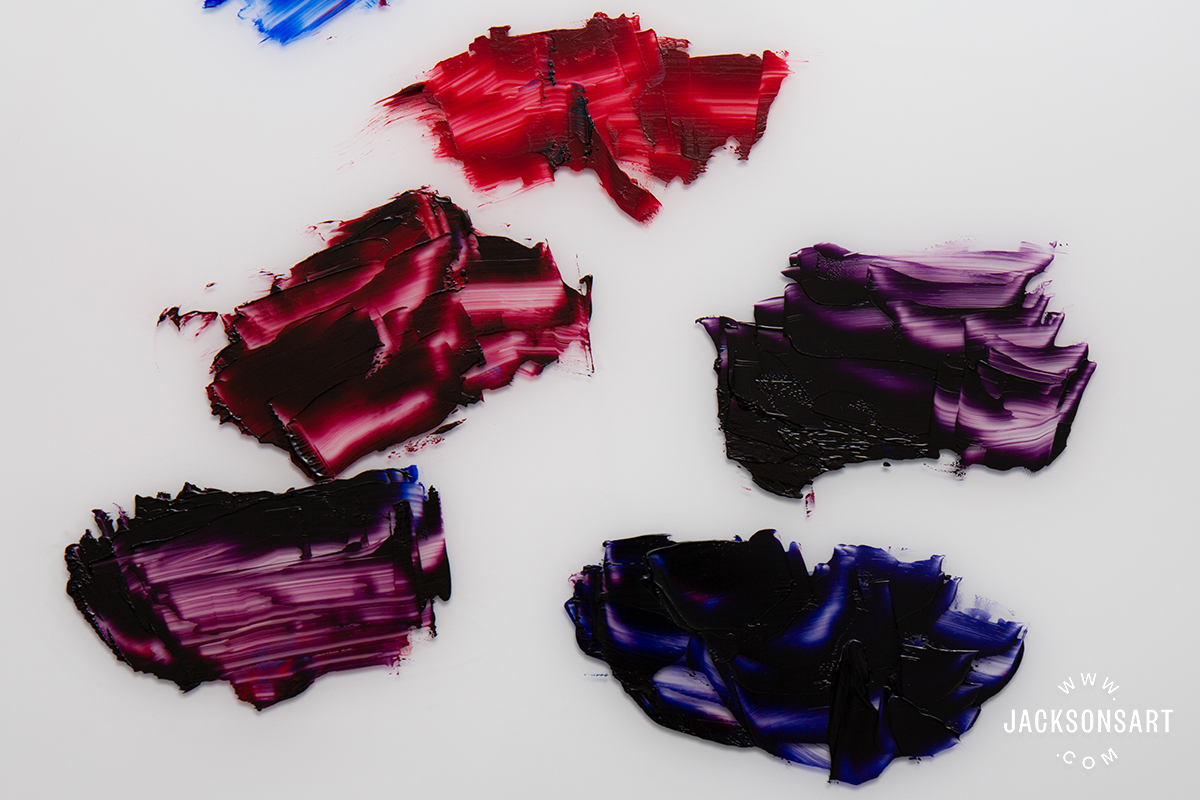 Mixing with yellow creates fiery oranges. Combining with a genuine cadmium yellow would make the mixture very opaque, but as this Cadmium Medium Hue is more transparent than a genuine cadmium pigment, some of the translucency of alizarin crimson is maintained: 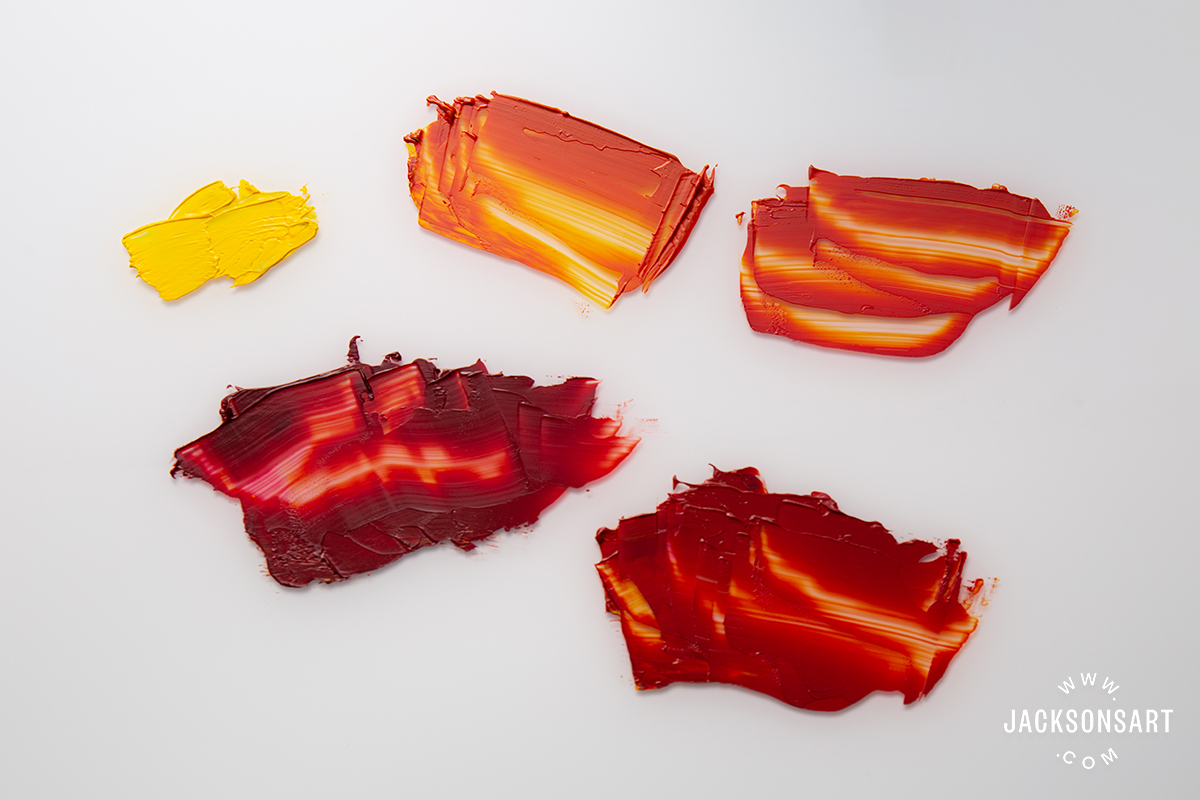 As green and red are complementary colours, viridan and alizarin crimson desaturate each other to make a neutral tint which looks black in masstone. Mixing chromatic blacks, rather than using black paint straight from the tube, gives much more realistic dark tones. 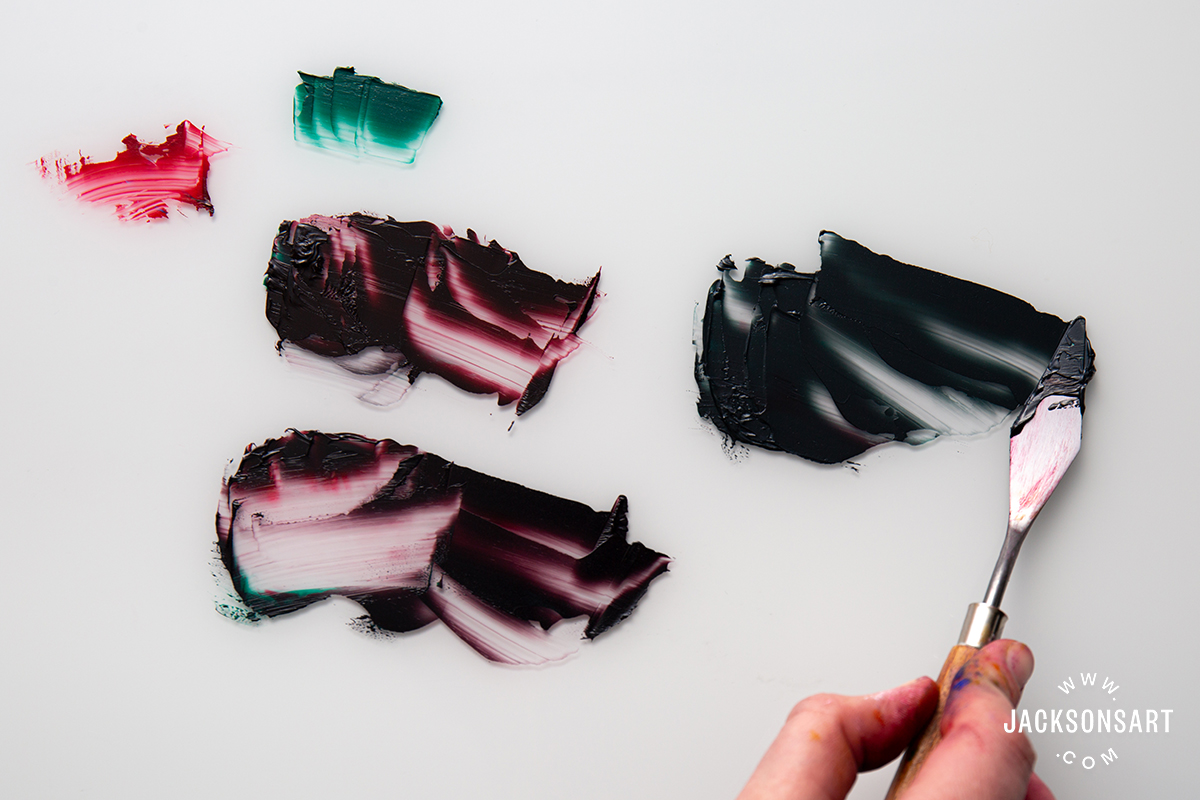 Despite being more lightfast than its predecessor madder lake, alizarin crimson is known to fade when exposed to UV light, especially when used in dilute washes or tints. Whether or not it is suitable for professional artwork is a point of debate among artists and conservators. On his site Handprint, Bruce MacEvoy says that it fades so reliably in watercolour that he uses it as a control colour for his lightfastness tests. He concludes that PR83 is unsuitable for professional watercolour artworks.

On the other hand, research by Golden shows that the pigment has a good lightfastness rating when bound in oil and used at full strength. A UV varnish can be applied to the finished work to protect it from the effects of UV light. However, the painting should not be exhibited or stored in direct sunlight even if a UV varnish has been used.

For artists who have concerns about the lightfastness of PR83, there are lightfast substitutes available. Below is a comparison of examples of genuine alizarin crimson paints (on the left) and alternatives (on the right): 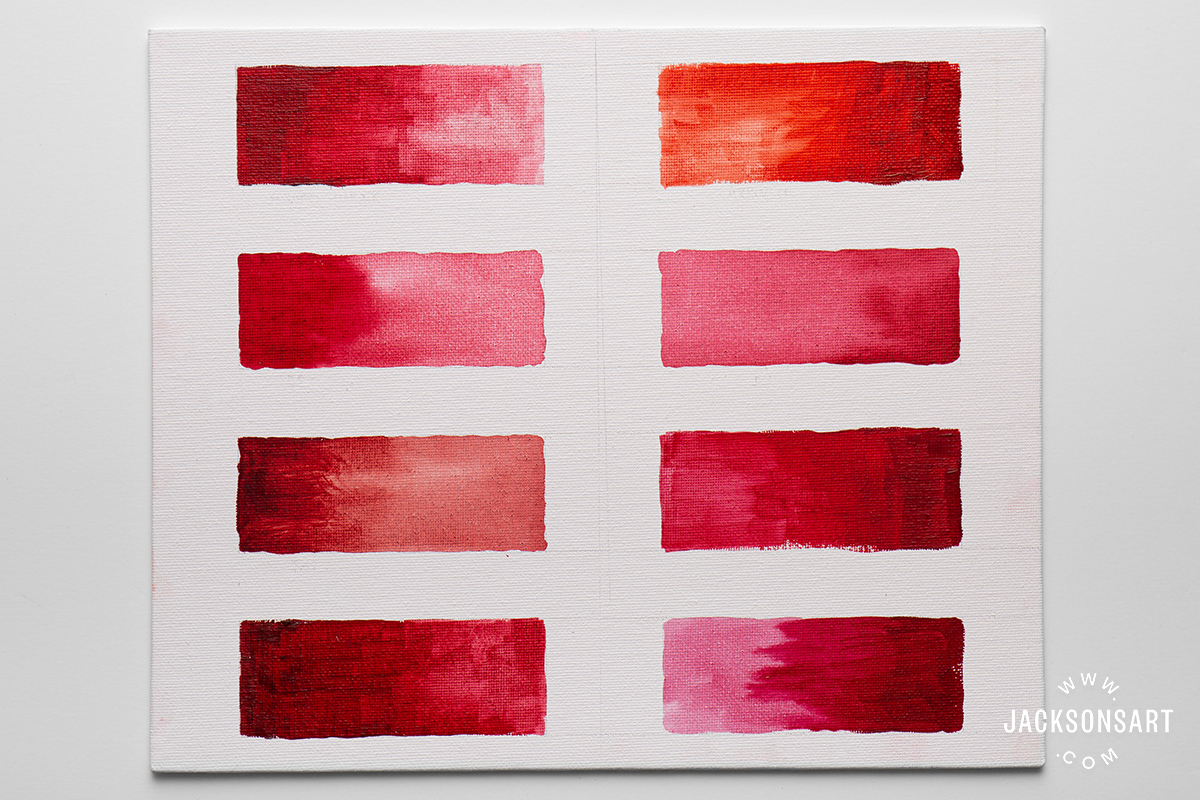 The pigments used to recreate the colour vary, from single pigments to mixtures of two or more pigments. On the tube of Michael Harding’s Crimson Lake, it states that the pigment, PR149 (perylene maroon) is an alizarin crimson alternative. However, it leans much more towards orange. Michael Harding’s Alizarin Claret (the third swatch down on the right-hand side), is much truer to the original colour. Jackson’s Artist Acrylic Alizarin Crimson Hue (on the bottom right) is a particularly blue-toned substitute. 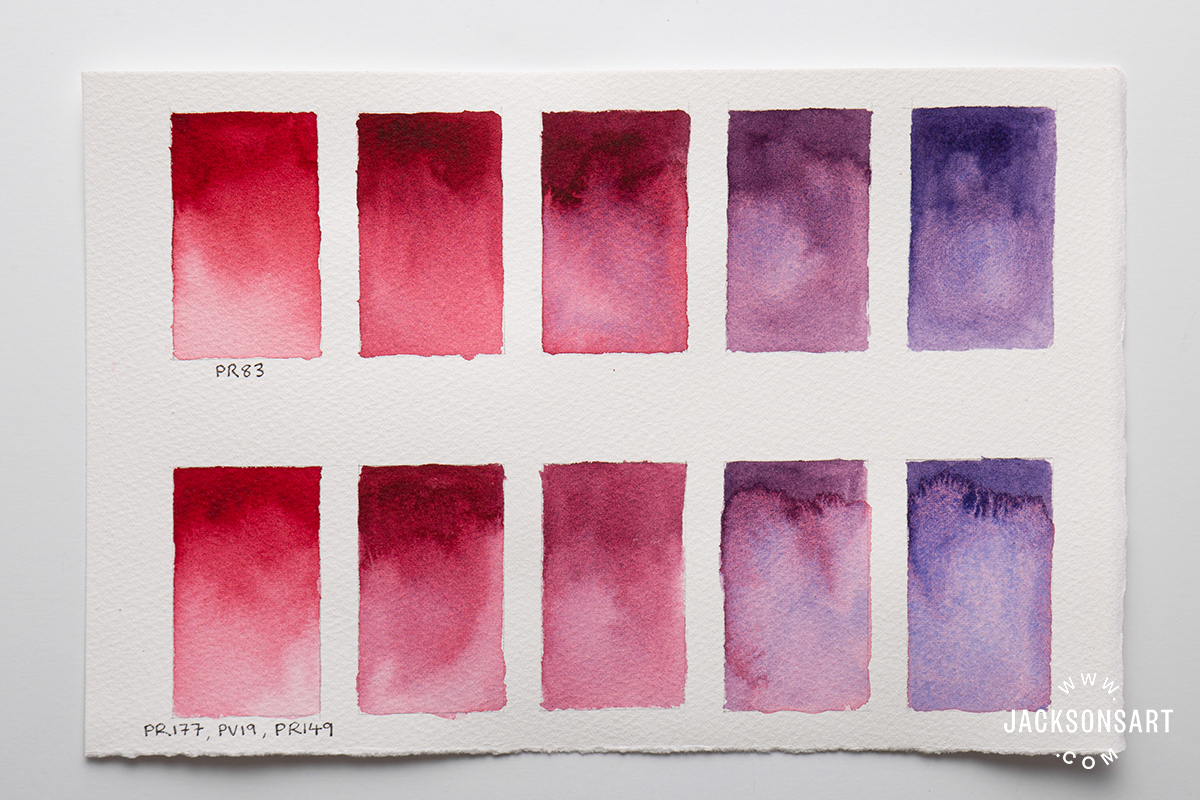 So, why does genuine alizarin crimson still hold such an appeal? Despite concerns about its permanence, it is still available in many professional oil and watercolour ranges, often as well as a permanent alternative. It could be partly that the pigment connects us to art history – it evokes the transparent glazes of madder that we see in paintings that hang on the walls of our national art museums. It is also unique as a mixing colour. Its particular depth of colour, transparency, and tinting strength make it an incredibly useful colour in an artists palette. It is not as bright as other cool red artist pigments, such as the modern quinacridone pigments, and makes uniquely deep, muted mixtures.

This article is part of an ongoing series of posts focussing on pigments, their histories, and characteristics. Read about ultramarine blue and its journey from a mineral to a synthetic pigment here.

Product ranges referenced in this article:

Other articles about colour on the Jackson’s blog: