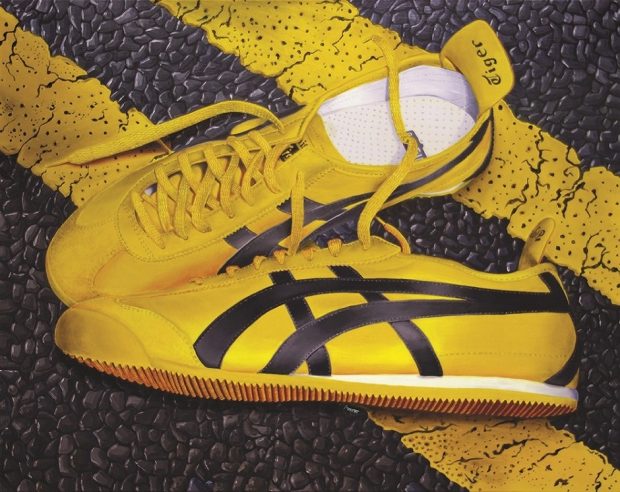 Last October Anth Knight won the People’s Choice Award in our ‘October Oils’ competition for his painting ‘Rachael’s Cons’. The painting demonstrated Knight’s ability to paint the ripples of a puddle on the tarmac of a road so convincingly, as it portrayed the feet of Rachael (doned in pristine classic black Converse trainers) stood in the shallow water. There was something very ‘of our time’ about the image – the ground so unmistakably British suburbia, the choice of footwear emblematic of youth culture for the 21st century. We wanted to ask Anth Knight more about his work. 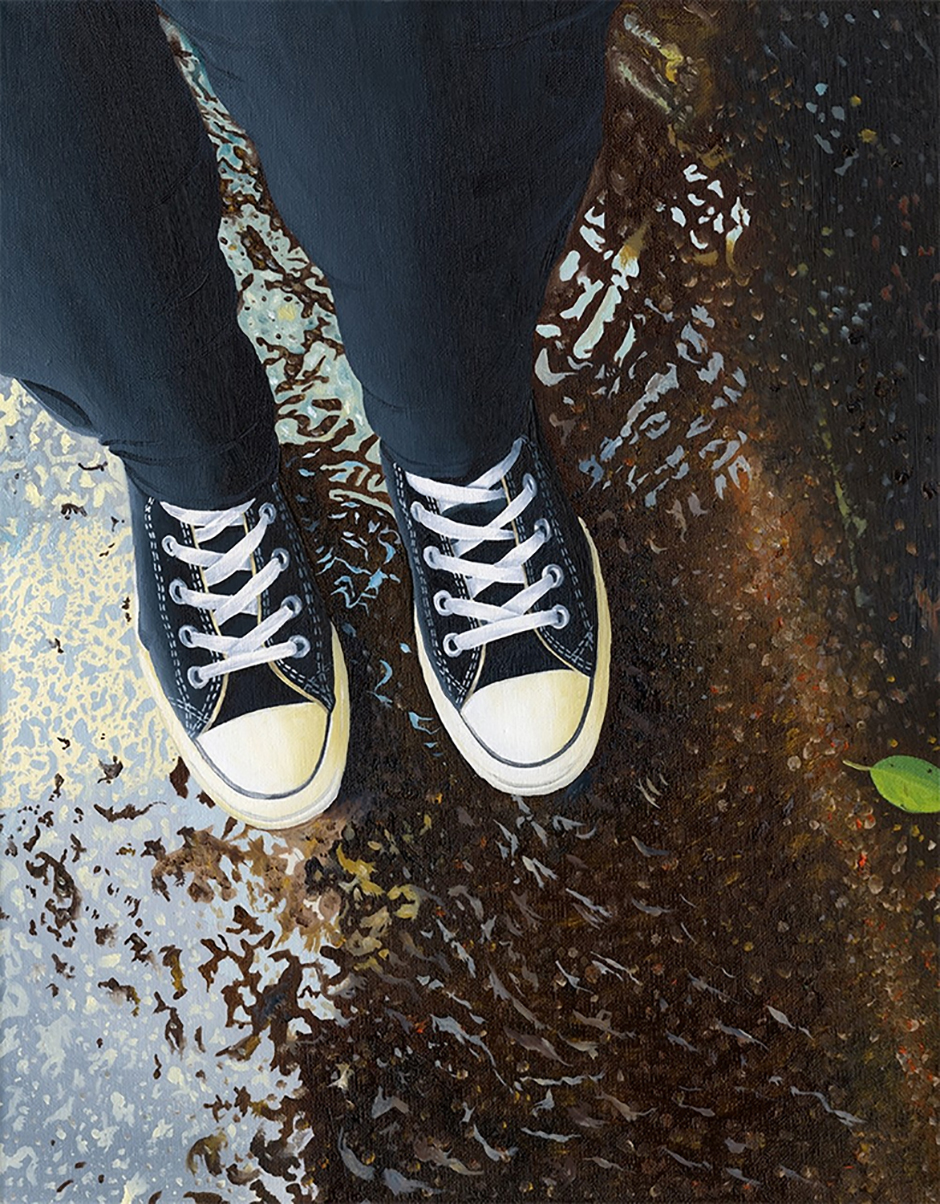 Lisa: Why do you paint?

Anth: Hmm…I think that it’s because I gain a huge amount of satisfaction through creation. Be it art, music or even my day job, graphic design, I always get a buzz from ‘making’ something. Drawing and painting is something I’ve done since my childhood, with a 12-year hiatus whilst I worked, got married, bought a house etc, and discovering that I could still do it and that I had in fact improved considerably when I returned to it in 2009 was an amazing feeling. 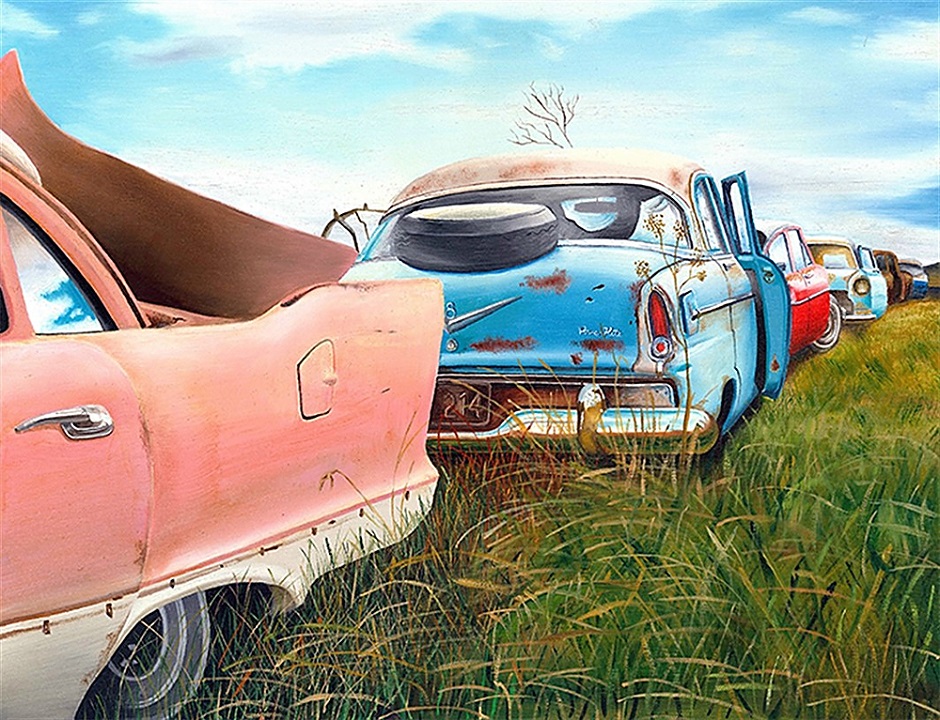 Lisa: What kinds of subject matter are you drawn to?

Anth: My subject matter varies depending on my mood, but my two favourite subjects are cars and trainers. A lot of these do have a common thread though, which is decay. I don’t like shiny anywhere near as much as I like rusty! I’m working on an American junkyard scene at the moment and have painted several pairs of well-loved and worn trainers before.

Lisa: When do you paint?

Anth: When I get the chance! I’ve just had the best part of two months without picking a brush up as work has been very busy and my home office/studio has been full of Christmas stuff, but now that Christmas is over with and work has quietened down slightly I fully intend to get my brushes back out. 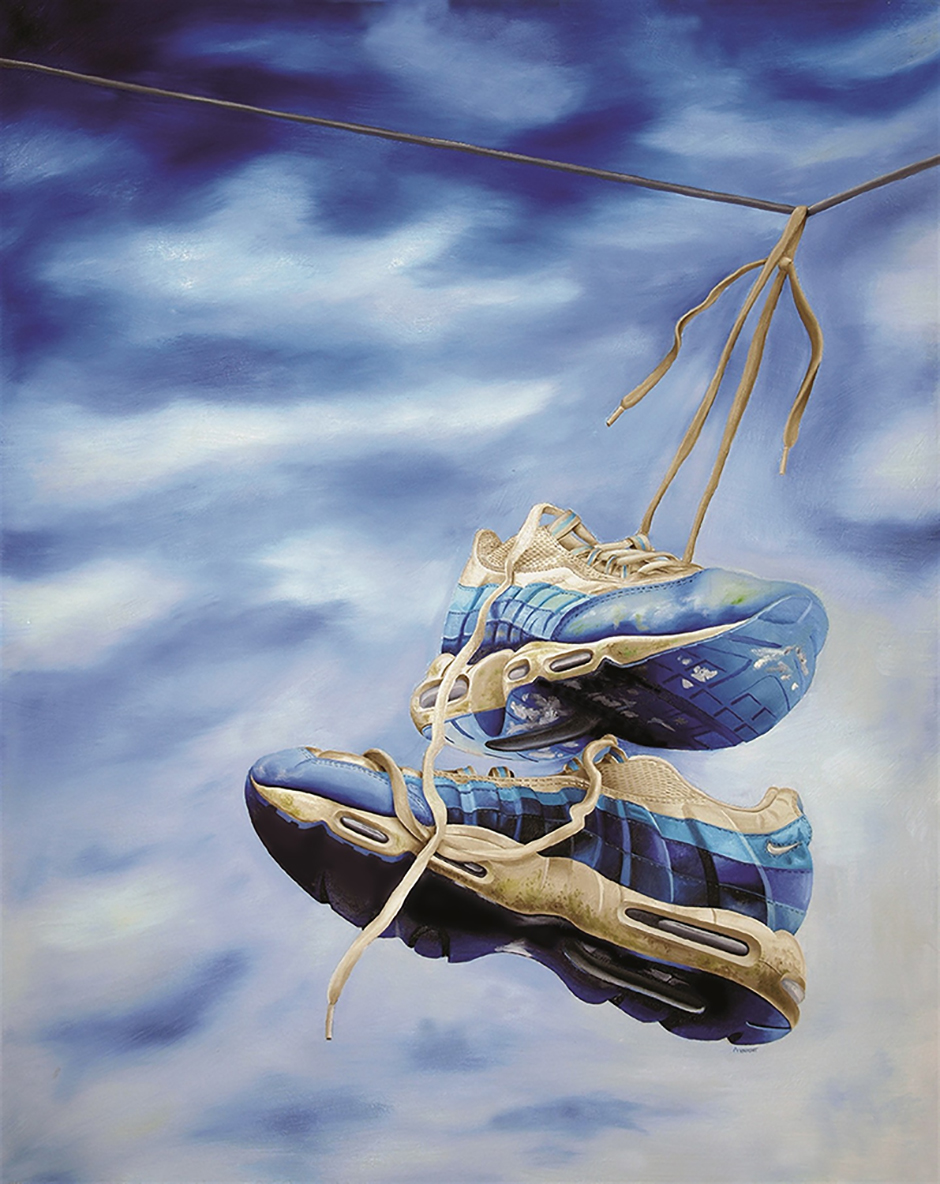 Lisa: What qualities does a good painting have that a good photograph lacks (in your opinion)?

Anth: This is a tricky one for me as I’m a huge fan of photorealism. Looking at other people’s work though, I think it’s the addition of the artist’s perspective that makes a painting for me. Even realism has to have a part of the artist in it for me, I don’t quite see the point of directly ‘copying’ a photograph onto canvas. Even my realistic work has a little ‘quirk’ somewhere as it’s all in the detail for me.

Lisa: Do you consider there to be any rules to good painting practice?

Anth: No. In fact, quite the opposite – I’m annoyed by rules, and whatever works for you, do it. It does annoy me somewhat when people on various blogs and in art groups criticise because something hasn’t been created a certain way. 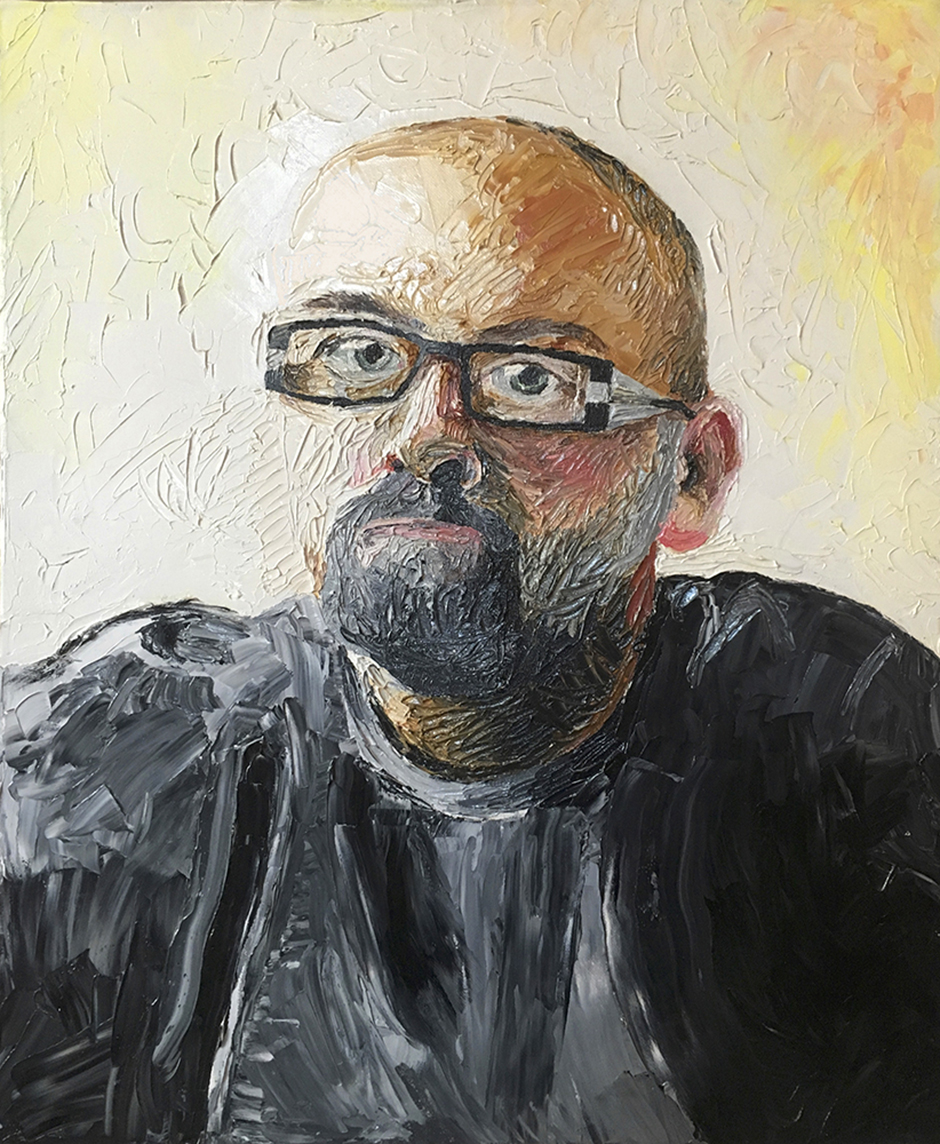 Lisa: Can you describe the space in which you make your paintings?

Anth: It’s an en-suite bedroom on the first floor of our townhouse which acts as my office/studio/library. It’s a million times better than our last house, where I had to work at the kitchen table.

Anth: I have several works-in-progress at the moment, two automotive and one of (surprise, surprise) trainers. The ‘trainers’ painting should be fun as it’s a 1200mm square close-up of some Superstar IIs, and I’m going to try and achieve as close to photorealism as I can manage on this one.

Lisa: What do you hope 2017 will bring to your artistic endeavours?

Anth: I’ve finally come to the conclusion that I only have time for one ‘thing’ in my life other than family and work, and I’m hoping that for 2017 that thing is art. I’ve pottered for the last seven years but in the coming year I hope to finally get some gallery space and recognition! 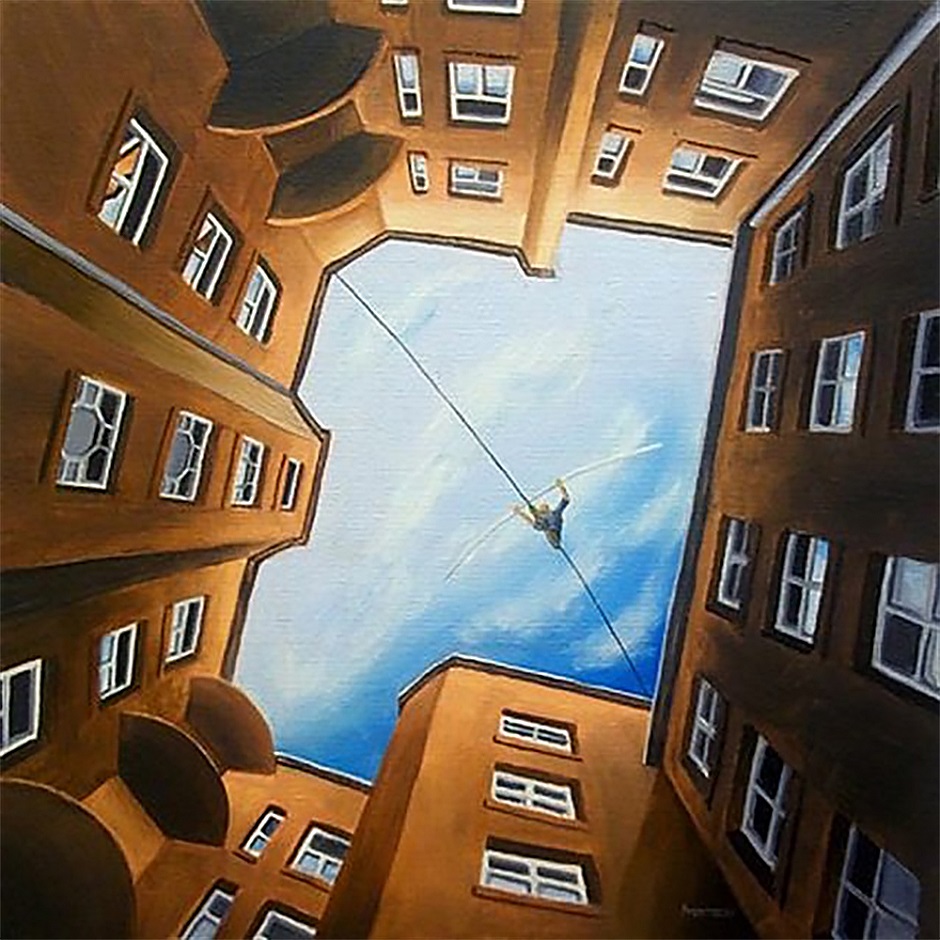 Anth: I did have a website that I built several years ago but that’s now defunct. I’m trying to pluck up the courage to have a go at another one but at the moment the best place to see my work and goings on is my Facebook page, D73. I also have a gallery page on www.painters-online.co.uk. 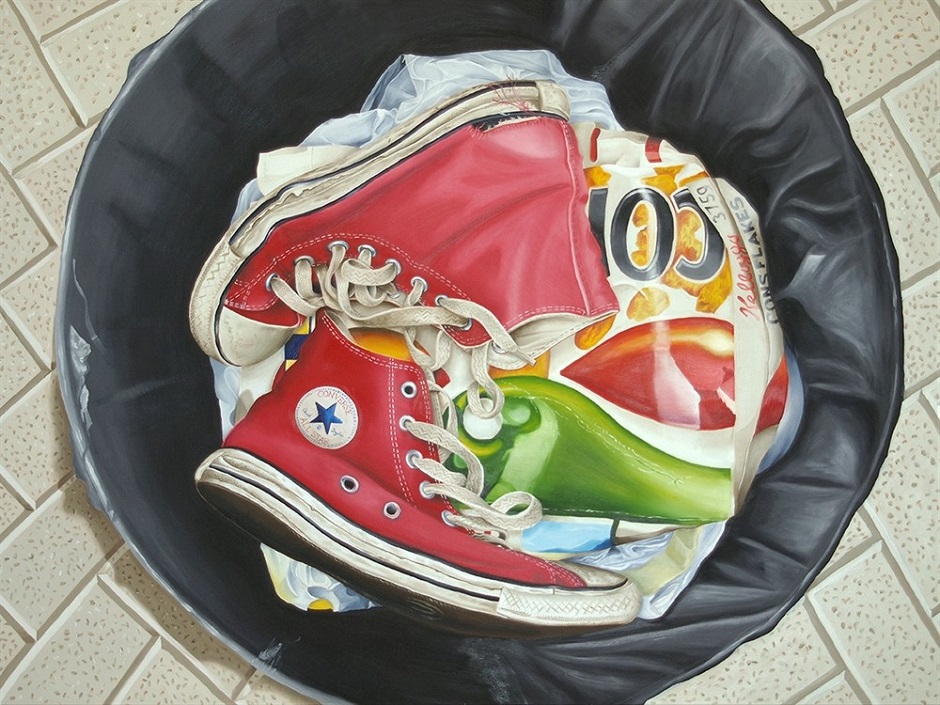