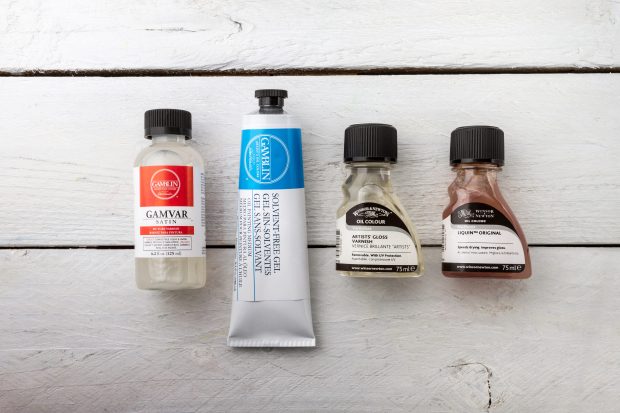 Having suffered a severe skin reaction to odourless mineral spirits (OMS) last year, I recently endured another rash caused by exposure to turpentine. Because of this, I decided to put together a solvent-free studio. This seems a no-brainer – but the solvent-free art supply industry is still relatively new and underdeveloped, and non-toxic products are still costlier than their established toxic counterparts.

So I ordered Gamblin Solvent-Free Gel Medium from Jackson’s and tried it out, in comparison to Liquin Original. First of all I will state that — despite many people’s vociferous disdain for Liquin — I cherish its smooth sheen and extreme ease of use. I have seen it written that the Old Masters would kill for Liquin, and I believe it. I think it is the miracle medium artists have been dreaming about for centuries — except that it is toxic.

I’ll happily concede that Liquin is far less toxic than odourless mineral spirits and turpentine. But it does something to me that no other substance ever has — it hurts my heart! That is not to say that I have romantic feelings for Liquin, but that after breathing it in for a couple of hours I actually have heart pain! I now know this phenomenon is not unique to me, as I have read accounts from other artists stating exactly the same thing, so I hope readers will consider my assertion that Liquin causes me heart pain as more than just anecdotal.

As a disclaimer, I should mention that I have absolutely zero vested interest in any of the companies I mention — Gamblin, Winsor & Newton, M. Graham, et al. 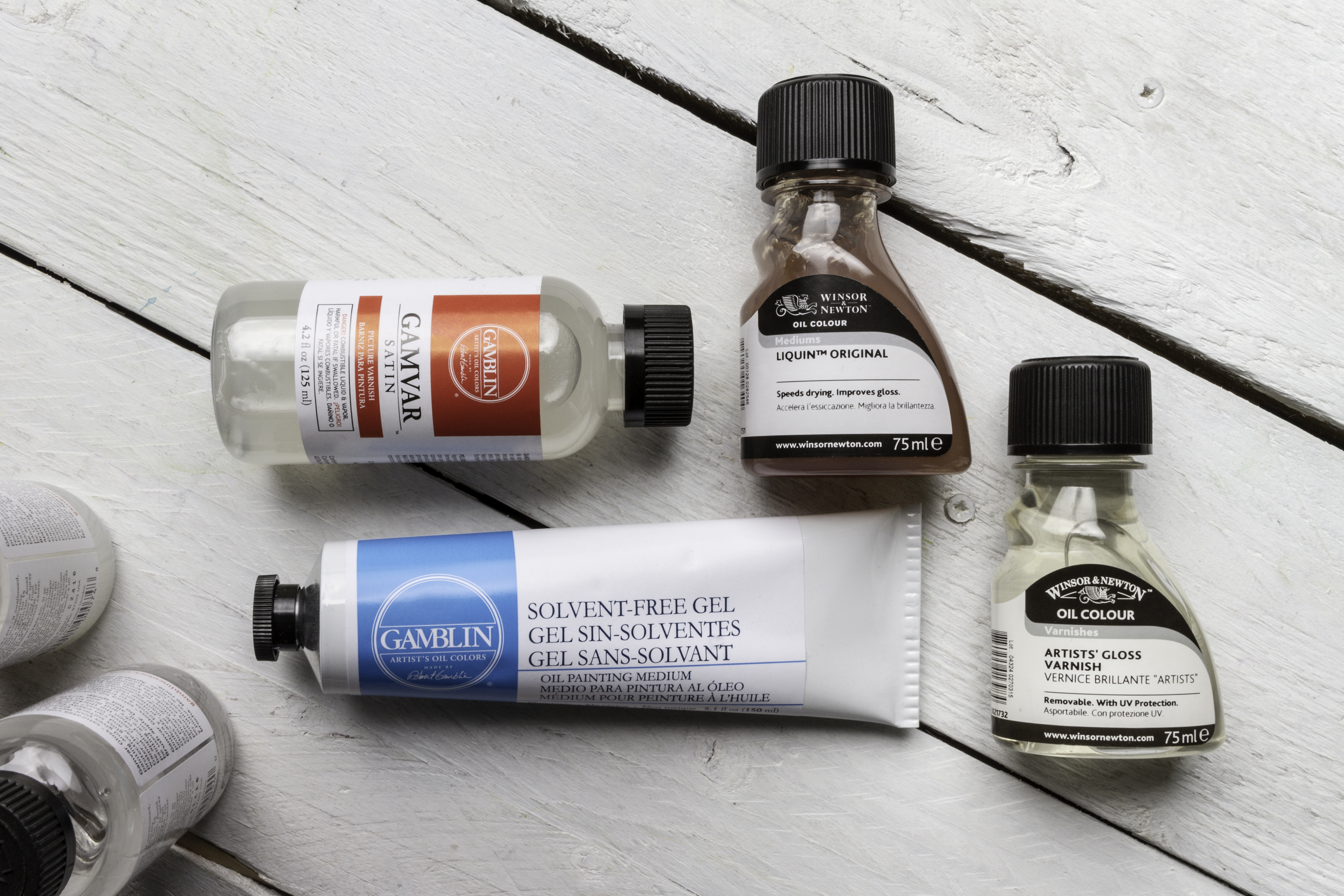 Opening the tube of Gamblin Solvent-Free Gel Medium, I instantly sensed its lightness – in both physical weight and odour. Its odour is more of a scent, which is reminiscent of mildly sweet plastic candy – it’s quite appetising to be honest. Mixing it in with oil paint (I mostly use Michael Harding and Williamsburg oils), the difference is immediately obvious between Gamblin Solvent-Free Gel and W&N Liquin Original: Gamblin Solvent-Free Gel is that much stickier than Liquin. It doesn’t travel quite as smoothly. This is not really a turn-off — it just feels and behaves a bit differently. However, it constructs a very similar mass with the paint. In other words, it has just as much body as Liquin, which to me is a plus. 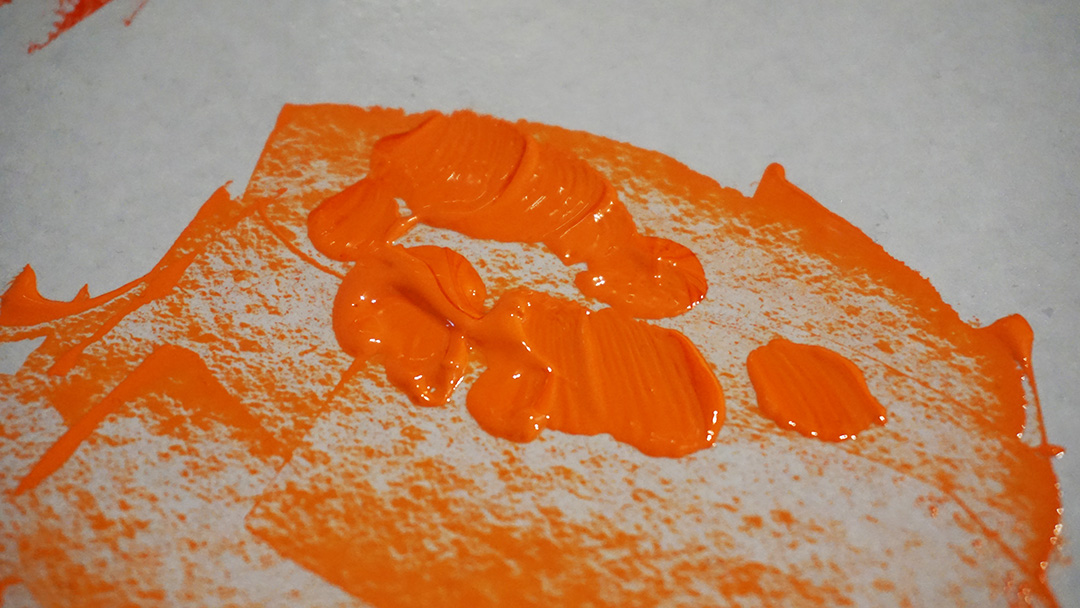 Painting with Gamblin Solvent-Free Gel is a joy because it gives off absolutely no toxic fumes. I can paint in a closed room without thinking about it, leaving me to my creativity. Its mild stickiness is a bit of a setback, I must confess — but not bad enough to warrant returning to Liquin.

Caveat: I still plan to use Liquin Original for backgrounds as it can render oil paint virtually strokeless on canvas – leaving a beautifully smooth background which I like (see photo below). 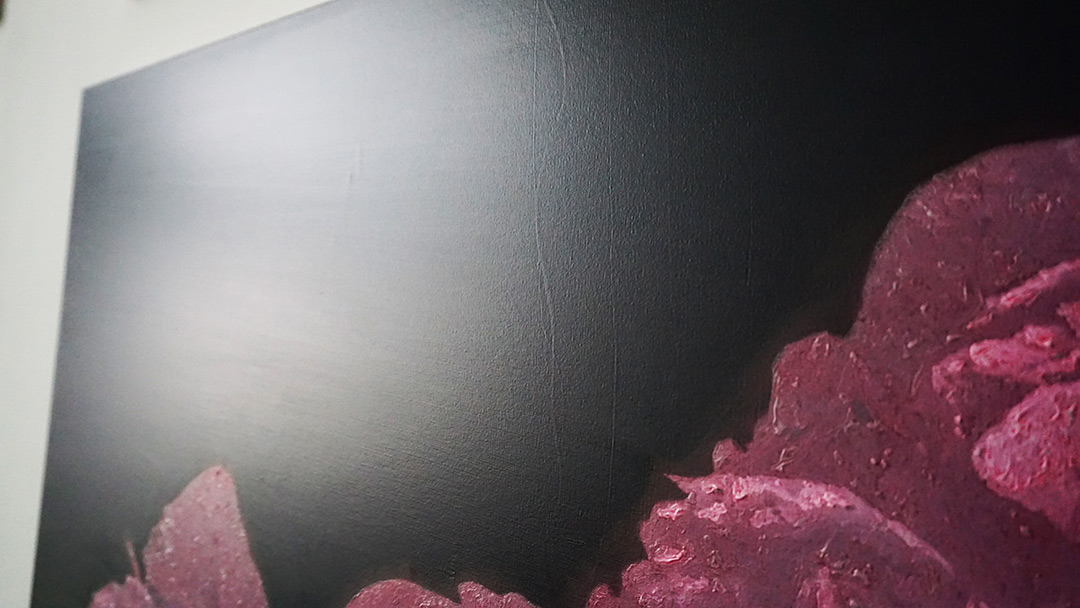 Winsor & Newton Liquin Original is probably the best oil paint medium ever invented, despite its detractors claiming otherwise. However, it is nowhere near as non-toxic as is commonly stated. Therefore I use it with caution, and with a mask, in a well-ventilated studio, and now only for backgrounds.

Gamblin Solvent-Free Gel Medium is a promising new solution for artists wishing to detoxify their studio and also for artists looking for a non-toxic alternative to Liquin Original. Do not hesitate to try it — it creates the same sort of body that Liquin does, if a bit stickier. 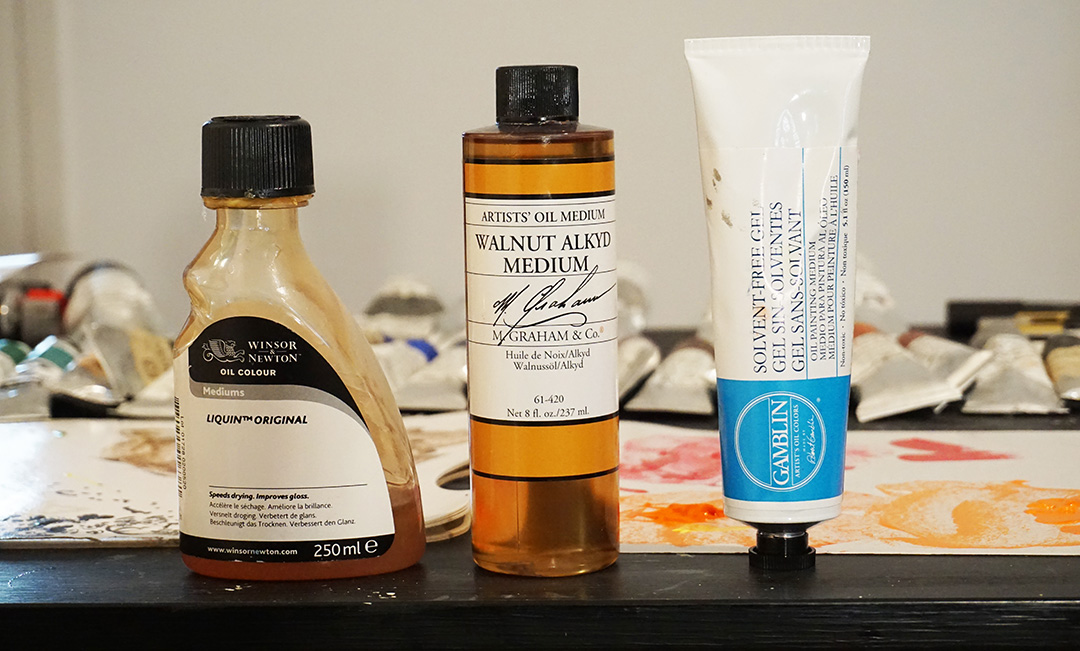 I also ordered M. Graham’s fully non-toxic Walnut Alkyd Medium, a superior, non-toxic alternative medium for oil painters who need a liquid, non-gel medium. It smells great — like walnut oil or banana bread —  and is good for making loose, inky oil paint. It will be an excellent solution for many artists. It is very liquidy, so maybe not a good substitute for Liquin Original, but for other applications it could be a godsend. I recommend it to anyone who wants a fluid medium which is non-toxic, as it is very high quality and satisfying to use on canvas. 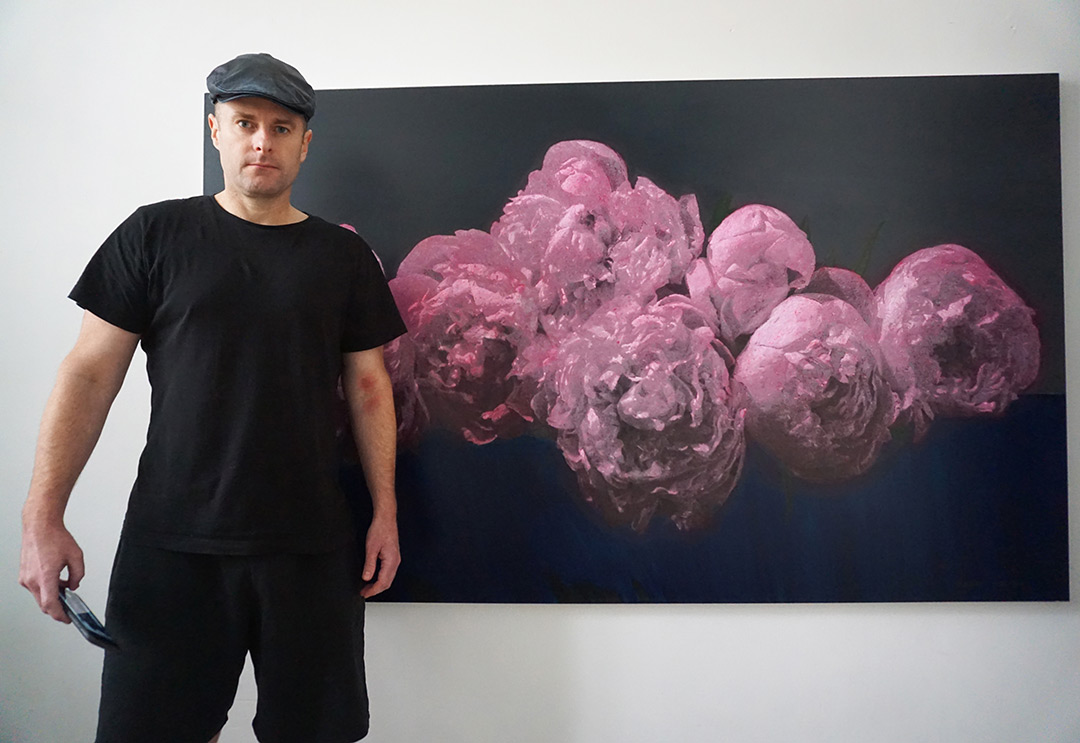 The artist Jesse Waugh with his painting ‘Peonies Faith’ (Oil on canvas).

I used Michael Harding’s Dammar Varnish V1 on about six large paintings last December, and despite excessive ventilation in the studio (I had a large fan blowing right on me and the paintings – and all the windows and doors open) I still had a bad skin reaction to its constituent turpentine, as well as inhalation issues such as my face turning red. Michael Harding’s Dammar Varnish V1 is a lovely, high-quality varnish, which imparts a perfect old-fashioned ‘Renaissance’ feel to paintings – but I just can’t take the turpentine. 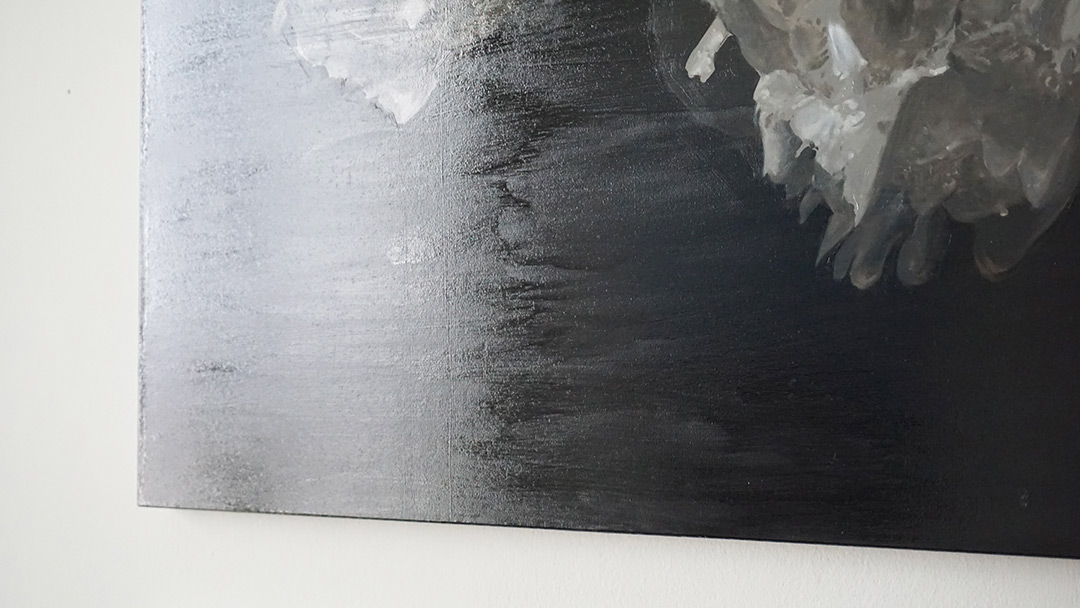 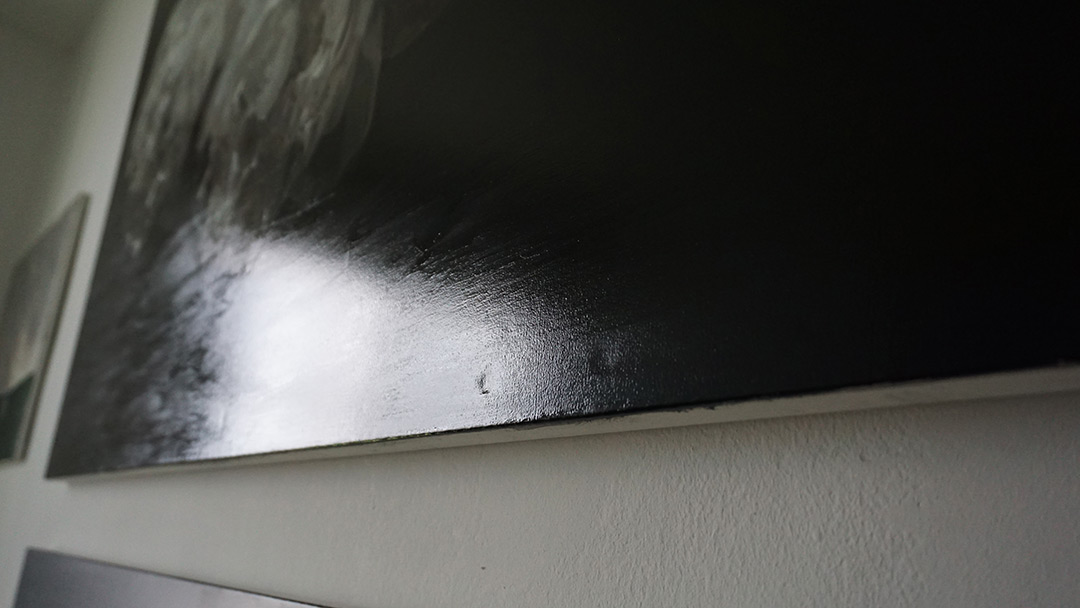 The ‘Renaissance’ sheen created by Michael Harding V1 Dammar Varnish, a picture varnish made of Double-rectified Turpentine and Dammar Resin.

Gamvar is deceptively watery, but it dries to a lovely, satin-gloss lustre. It does not seem like a varnish when it’s in its bottle. I didn’t detect any odour coming from it – but I kept my distance from it because I’ve read it has odourless mineral spirits as an ingredient, and frankly I’m terrified of OMS now after what it did to my skin last year. 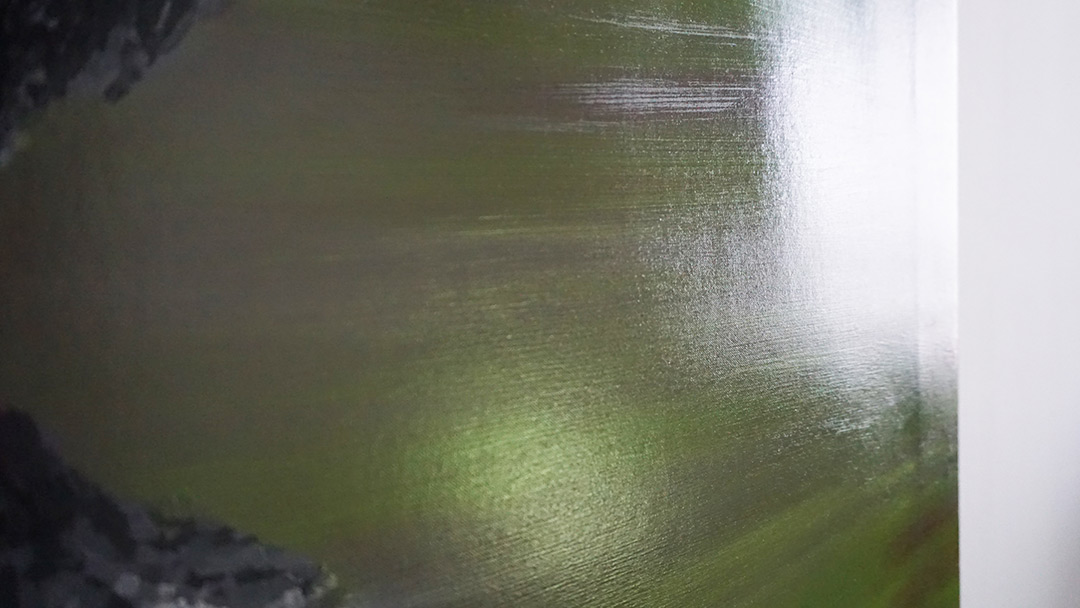 Winsor & Newton Artists’ Gloss Varnish is a very professional, clear varnish which I’m sure must be the staple of many an artist. It is non-yellowing, which is a huge plus, and you can see exactly how clear it is both in the bottle and on canvas. It’s tricky to get the right thickness onto the canvas without leaving visible strokes when dry. If too much is applied it can drip, although the drips dry rather smoothly. Although I prefer no drips or splotches, I’m okay with a bit of a hand-made feel and look to the finished painting, so I’m not overly strict about application. 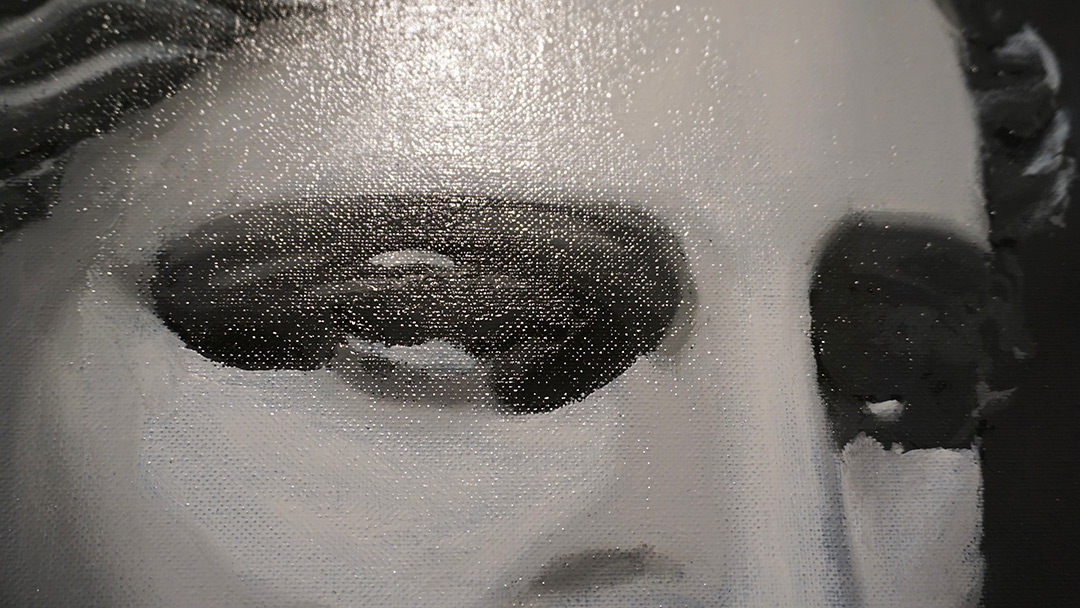 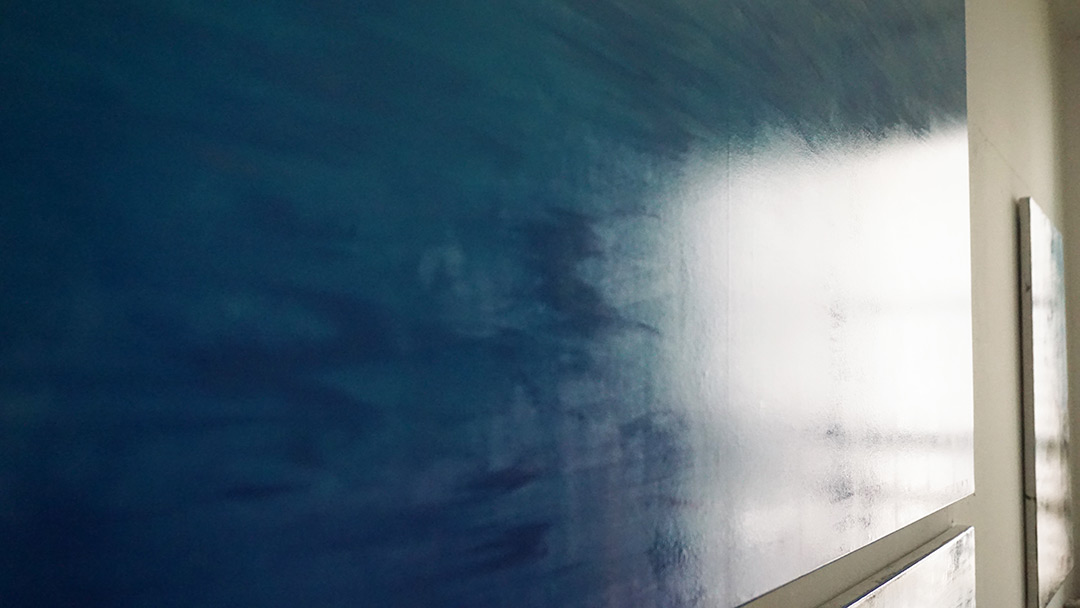 A photo showing the sheen of Winsor & Newton Artist’s Gloss Varnish when applied to an oil painting.

Winsor & Newton Artists’ Gloss Varnish leaves an excellent gloss if applied correctly – maybe the best gloss for fine art paintings in the industry. Gamvar is maybe a bit gummier looking and feeling – but its satin gleam can be enthralling and beautiful. The difference between the two is more aesthetic than anything else, assuming they are both applied with equal care.

I varnished outside and used a mask.

I used small disposable paint rollers to apply Gamvar and the Winsor Newton Gloss Varnish on different paintings. The rollers cost about €1.20 each here in Spain, which is worth it because it allows me to circumvent having to clean brushes in odourless mineral spirits or turpentine – I can just throw the rollers away. Not environmentally friendly, but I’ll put my health first. 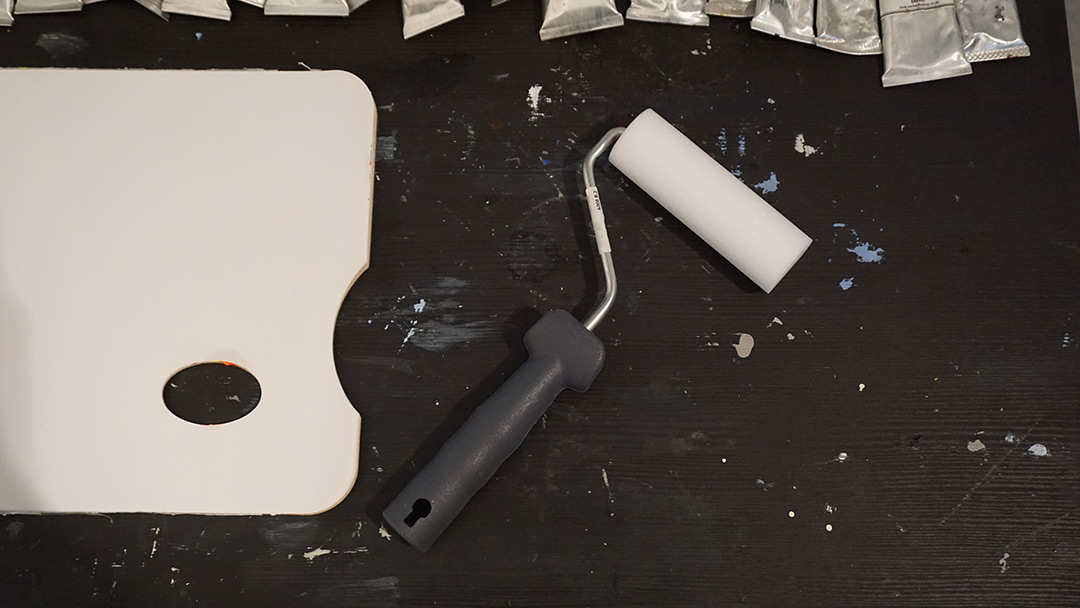 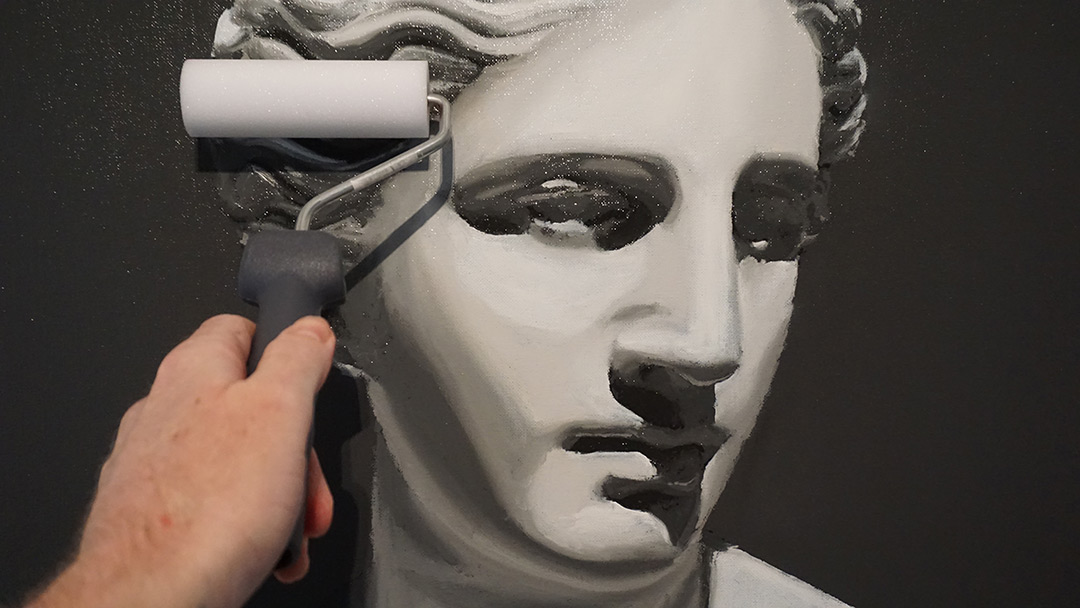 Using disposable paint rollers to apply varnish to a painting by Jesse Waugh.

Gamvar Picture Varnish is a beautiful, lustrous varnish which imparts a satisfying aesthetic to paintings, and can be used as soon as a painting is touch dry, as it has the unique quality of letting paintings breathe. It’s far superior to exhibition varnish in this regard.

Winsor Newton Artists’ Gloss Varnish leaves a fantastically clear, strong gloss which will impress viewers of your paintings. It takes a bit more work to get right (than Gamvar), but if you apply it correctly you’ll have a winner as it saturates colours excellently.

Gamvar Picture Varnishes (Gloss, Satin and Matte) are available at Jackson’s, as are Winsor & Newton Liquin Original and the Gamblin Solvent-Free Gel Medium. We will have M. Graham’s Walnut Alkyd Medium (and the rest of the M. Graham oil range) in stock soon; please check our newsletter for announcements.

For more information about Jesse’s art, search “Jesse Waugh” on Google or check out the gallery on his website.