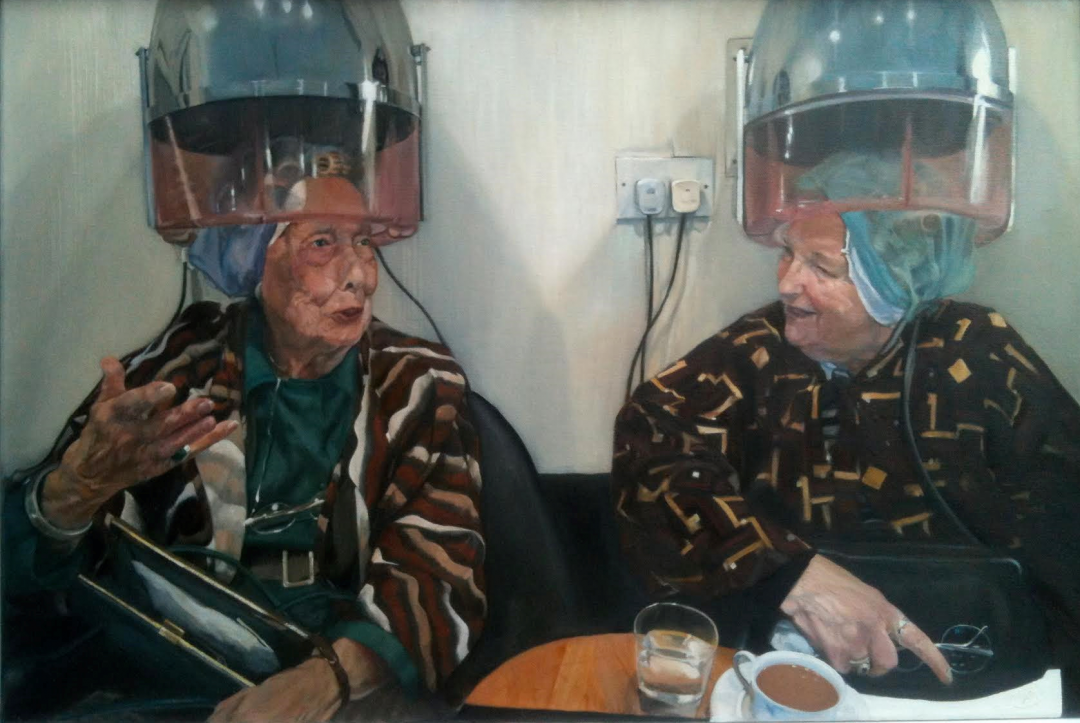 From Treading the Boards to Oil Primed Boards! An Interview with Teri Anne Scoble

Teri Anne Scoble’s transition from dancer to painter has been a great success, seeing the artist exhibit twice in the BP Portrait Award as well as feature in Sky Arts’ ‘Artist of the Year’ 2014, reaching the finalist level in the Edinburgh heats. Earlier this year Richard Pikesley, President of the New English Art Club, awarded Teri Anne with the Oil Painting Prize in the Jackson’s Open Painting Prize. Her prize-winning work, ‘Mrs Damon and Mrs Healey (version 2)’ is a heart-warming portrayal of two ladies sharing a laugh in a hairdressers. The painting is exemplary in showing the artist’s technical skill, with masterful handling of paint to describe all the textures found on all the surfaces within the composition, from the the patterned gowns the ladies are wearing to their skin tones. I wanted to find out more about Teri Anne Scoble’s characterful paintings. 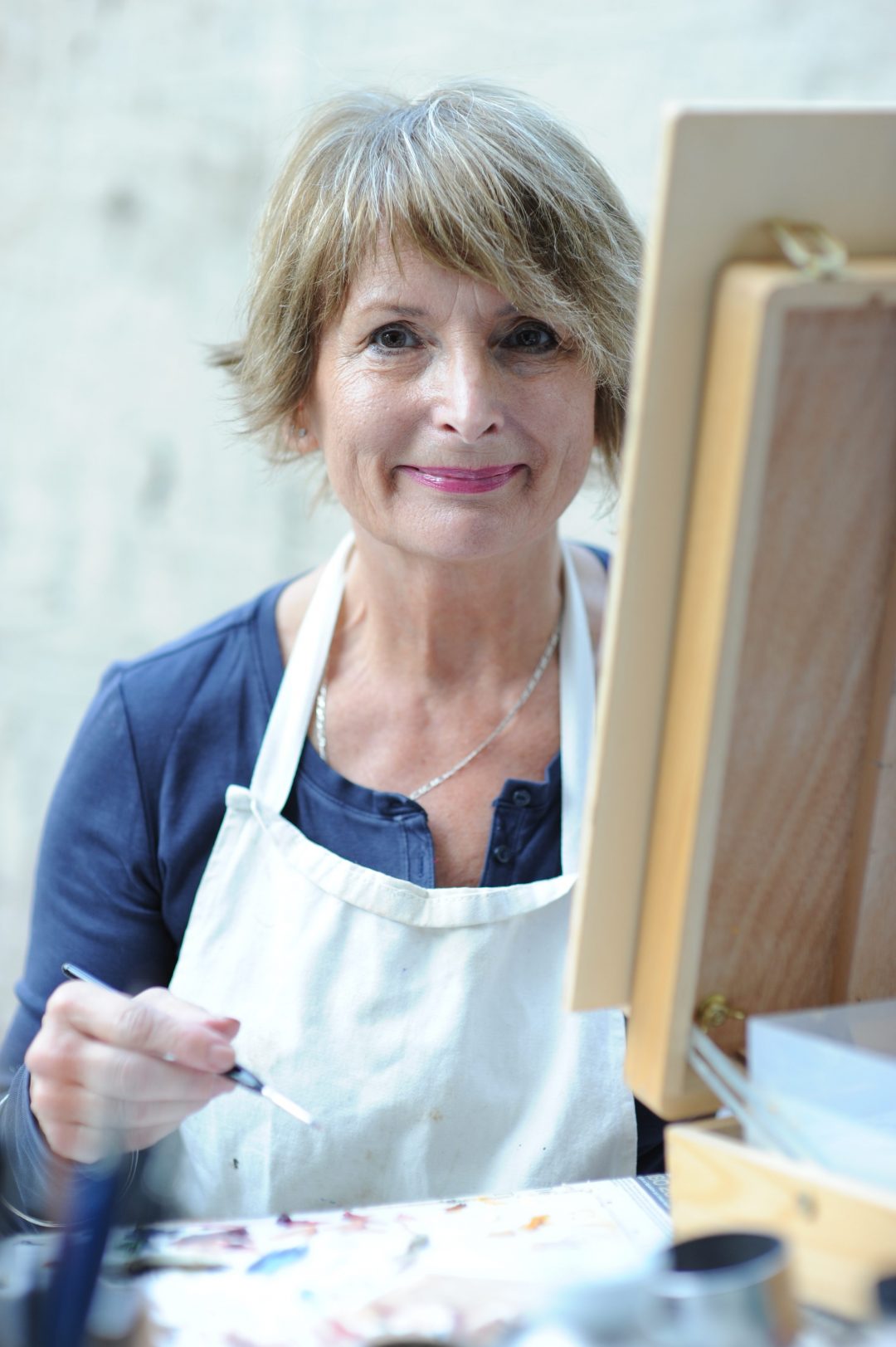 Lisa: What was the motivation behind painting a second version of Mrs Damon and Mrs Healey?

Teri Anne: The second version of Mrs. D and Mrs. H came about as a commission. The daughter-in-law of Mrs. Damon wanted to buy the first painting when it was on display in the 2013 BP Portrait Award exhibition at the National Portrait Gallery, London. As it had already sold to an art collector via the NPG, I offered to paint a second version. Da Vinci painted two versions of ’The Virgin of the Rocks’ so why not? I spent more time on the second painting and it is much more detailed. Mrs. Damon’s family lent me personal items to put into her handbag. With kind permission of the Damons, the painting will be on display in the Women in Art Exhibition to be held at Burgh House, Hampstead from 27th June until 4th July. This will be the first time the second version has ever been exhibited. 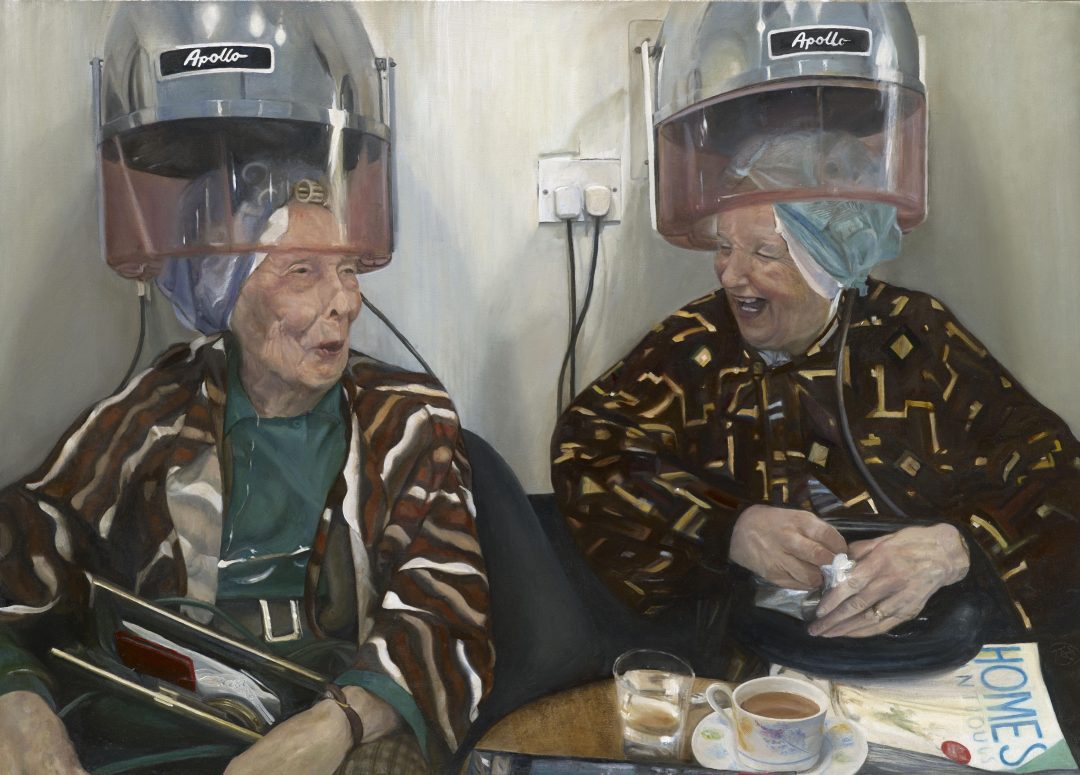 Lisa: On your website you describe encountering Mrs Damon and Mrs Healey and being inspired by their vivacious chatter… it’s almost as if not knowing the subjects allowed you to portray them more purely within that moment, without the baggage of any other aspects of their identity. Would you say that your paintings are more concerned with capturing people within a specific moment rather than a more timeless portrayal of their identity?

Teri Anne: I love to paint snapshots of peoples’ lives. In my portrait of the two brothers in ‘The 271 to Arsenal’ I hoped to capture what Caravaggio caught in his painting ‘The Cardsharps’, where there is an interaction between two boys but you know that a lot more is going on, and you’re left speculating on what might happen next. I like to make the viewer wonder what someone might be saying or what they’re about to do. A comment on twitter about the ’271’ painting said that the boys sitting at the bus stop looked as though they might spring up at any moment and walk out of the painting. That really pleased me. 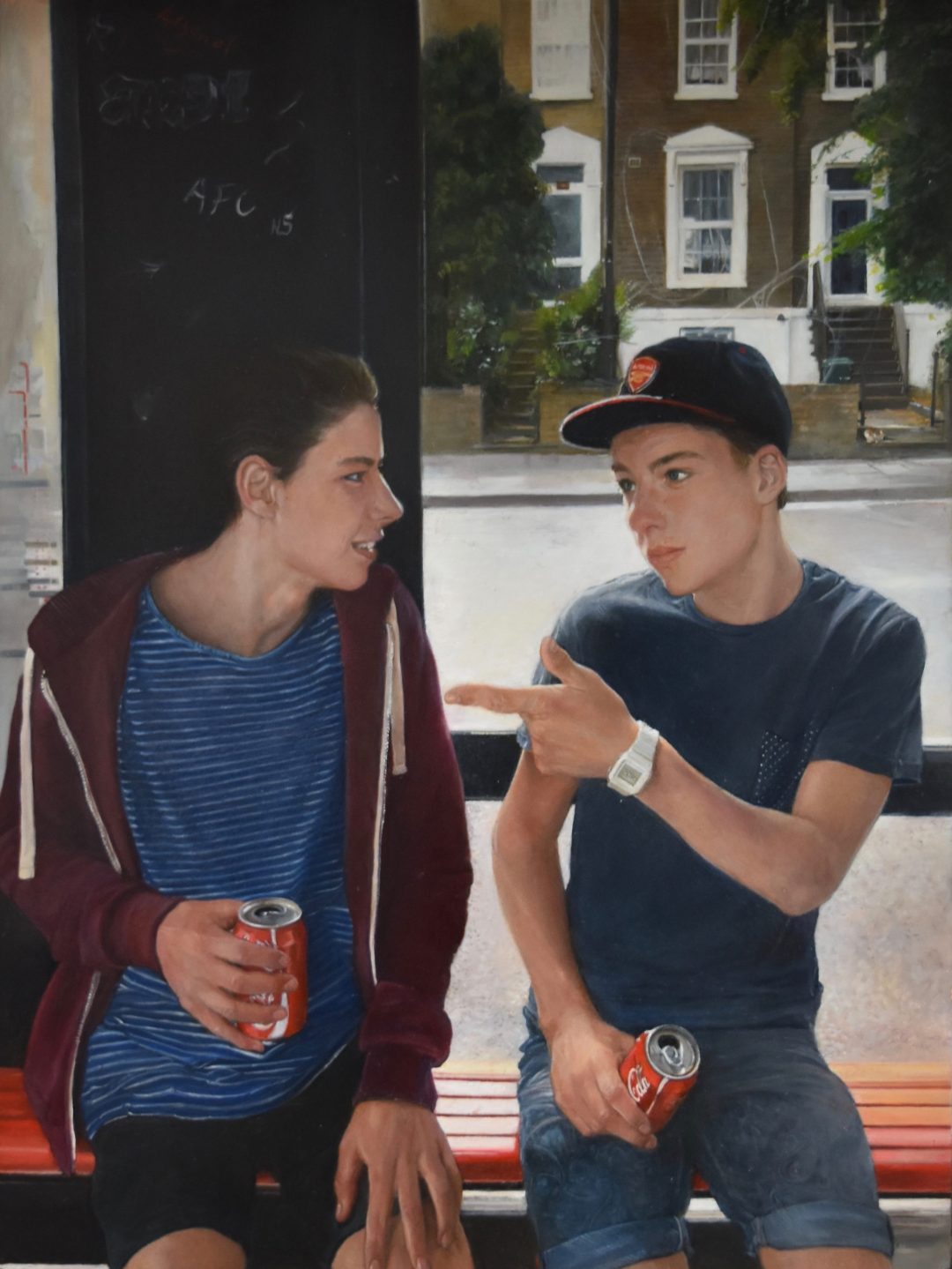 Teri Anne: Recognition through prizes and awards helps to value and endorse an artist’s work. Many a painting would remain long unfinished without the carrot of an exhibition or painting prize for the artist to go for. Painting prizes such as Jackson’s encourage artists to get creating and enter. Deadlines are a good thing, especially for me as I can fiddle about forever. 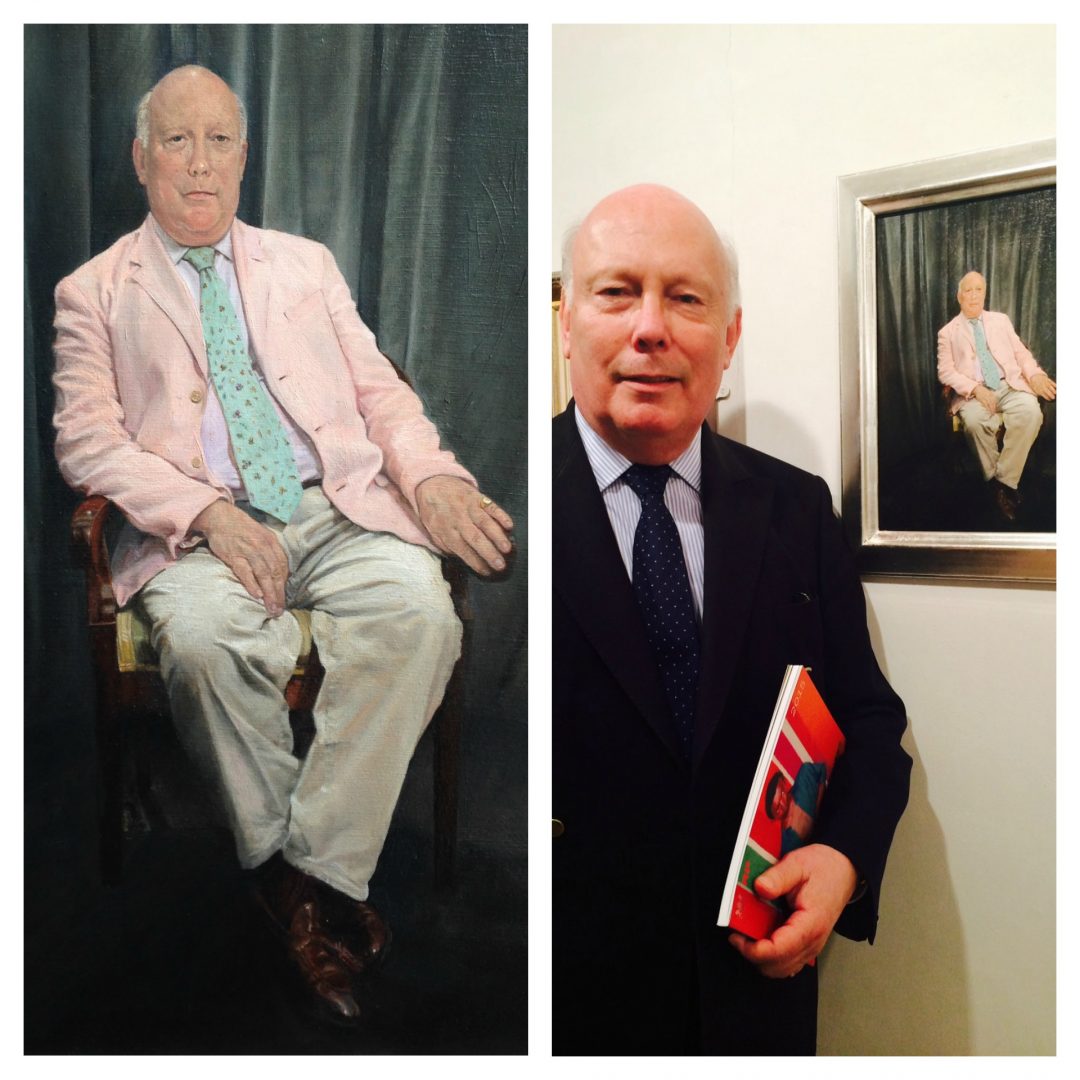 ‘Lord Julian Fellowes’ (detail) by Teri Anne Scoble, a portrait started as part of the Sky Arts Portrait Artist of the Year Competition, was subsequently exhibited at the Royal Society of Portrait Painters Exhibition 2015. Right: Lord Julian Fellowes with the finished portrait

Lisa: How long have you been painting for and what is your artistic background?

Teri Anne: I’ve been painting for as long as I can remember and received my first oil painting kit when I was seven years old. Even though back then, I chose dance/choreography for my career – painting has always been a part of my life. I would set up my easel backstage and paint portraits in-between shows of anyone who would sit for me. 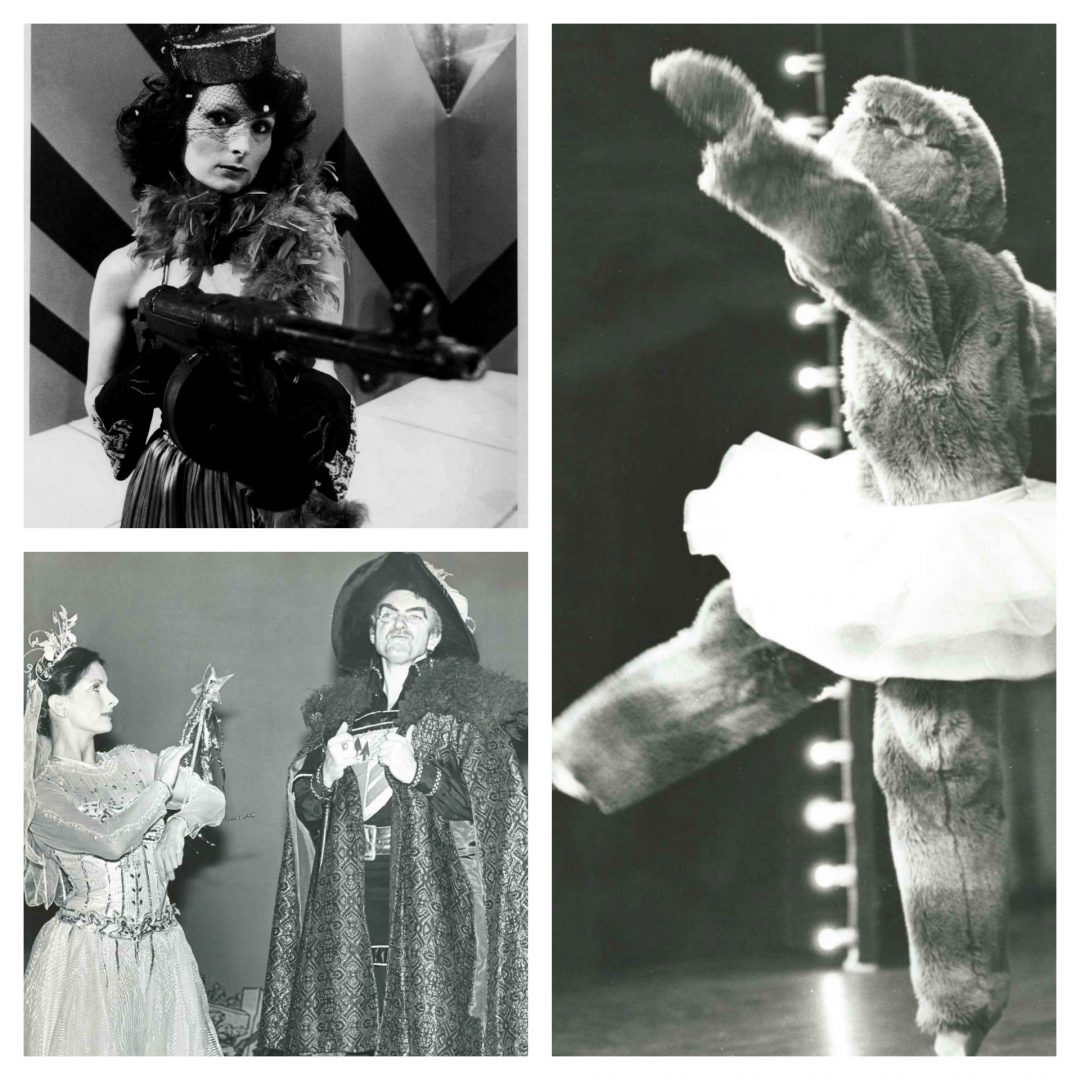 Lisa: You mention on your website that you were a dancer and started to paint when your dancing career came to an end. Was it very difficult to make the  transition from dancer to painter and are there any similarities between the 2 modes of expression?

Teri Anne: I see a lot of similarities between the two modes, as Rauschenberg and Merce Cunningham showed. I looked upon my work as a choreographer in very much the same way as I do painting. The stage being my canvas – the blocking in of a routine – the steps and combinations – with the dancers and costumes providing the line and colour. I once choreographed and danced out of a Millais painting on TV! My dancing career hasn’t entirely come to an end. I still get called in on the odd production when old codger dancers are required. I have also recently been working on a series of Tap performance art work. Painting with my feet! 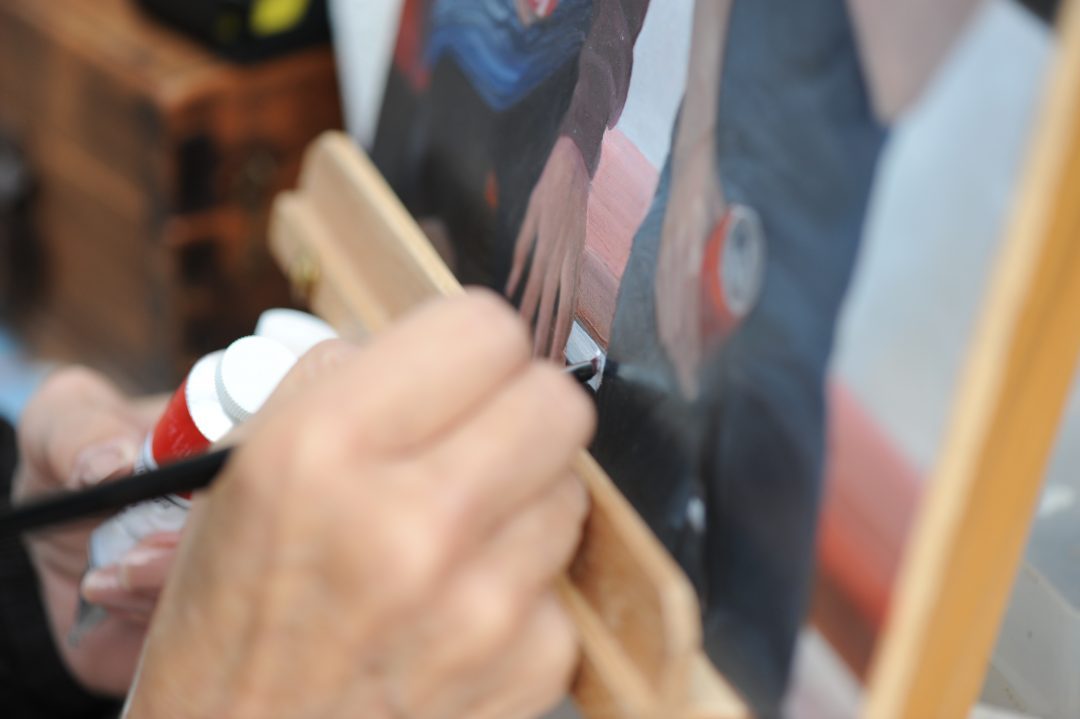 Lisa: Which painters do you most admire and why?

Teri Anne: There are so many artists I admire – from artists such as Durer to Richter. You will often find my nose pressed up to Durer’s St. Jerome in the National Gallery, marvelling at it’s miniature exquisiteness. I like paintings to somehow move me and will never forget the impact Da Vinci’s ‘La Belle Ferronniere’ eyes had on me when I saw it for the first time face to face. Photographs don’t reach you in the same way. 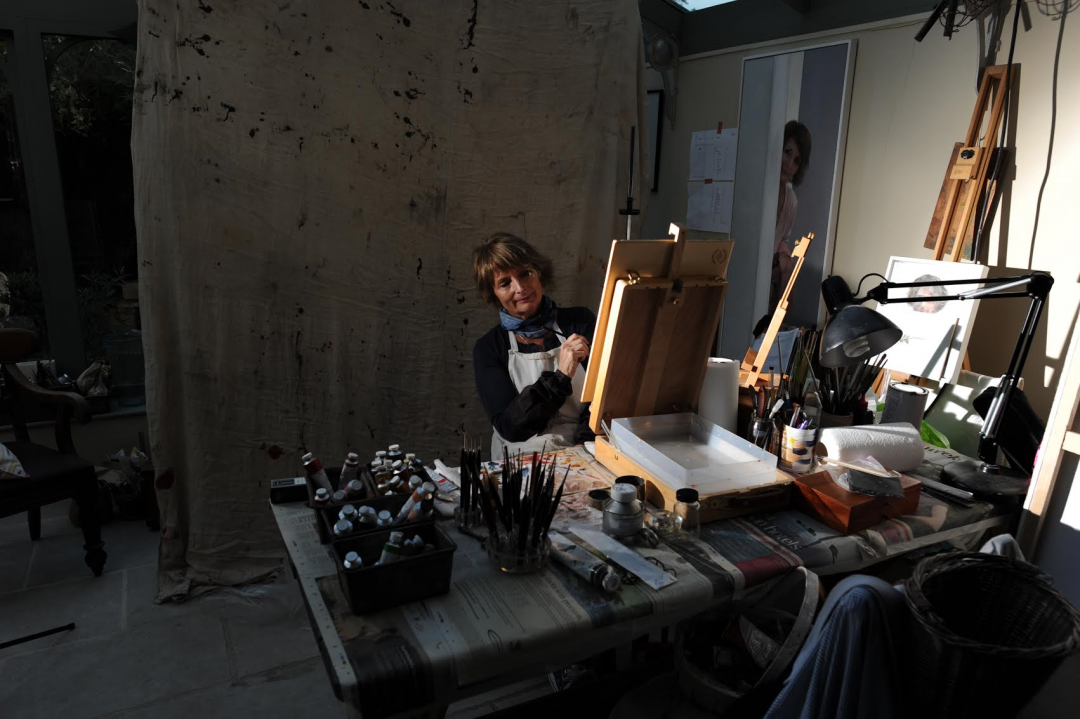 Lisa: What qualities do you most love about oil paint? Do you ever mix mediums into the paint and do you have any tips you can share about getting the best results from your paint?

Teri Anne: The qualities I love about oil paint are necessary to my way of working. I paint very thinly building up many layers. It is a slow process as each layer needs to dry. I strive to achieve a translucency by glazing on skin tones in different layers, as though I am painting actual layers of skin from the bone out. I use 50/50 mix of linseed and turpentine. I also like to build up texture and have been recently using beeswax. I use eco and low odour solvent products and animal friendly synthetic brushes. 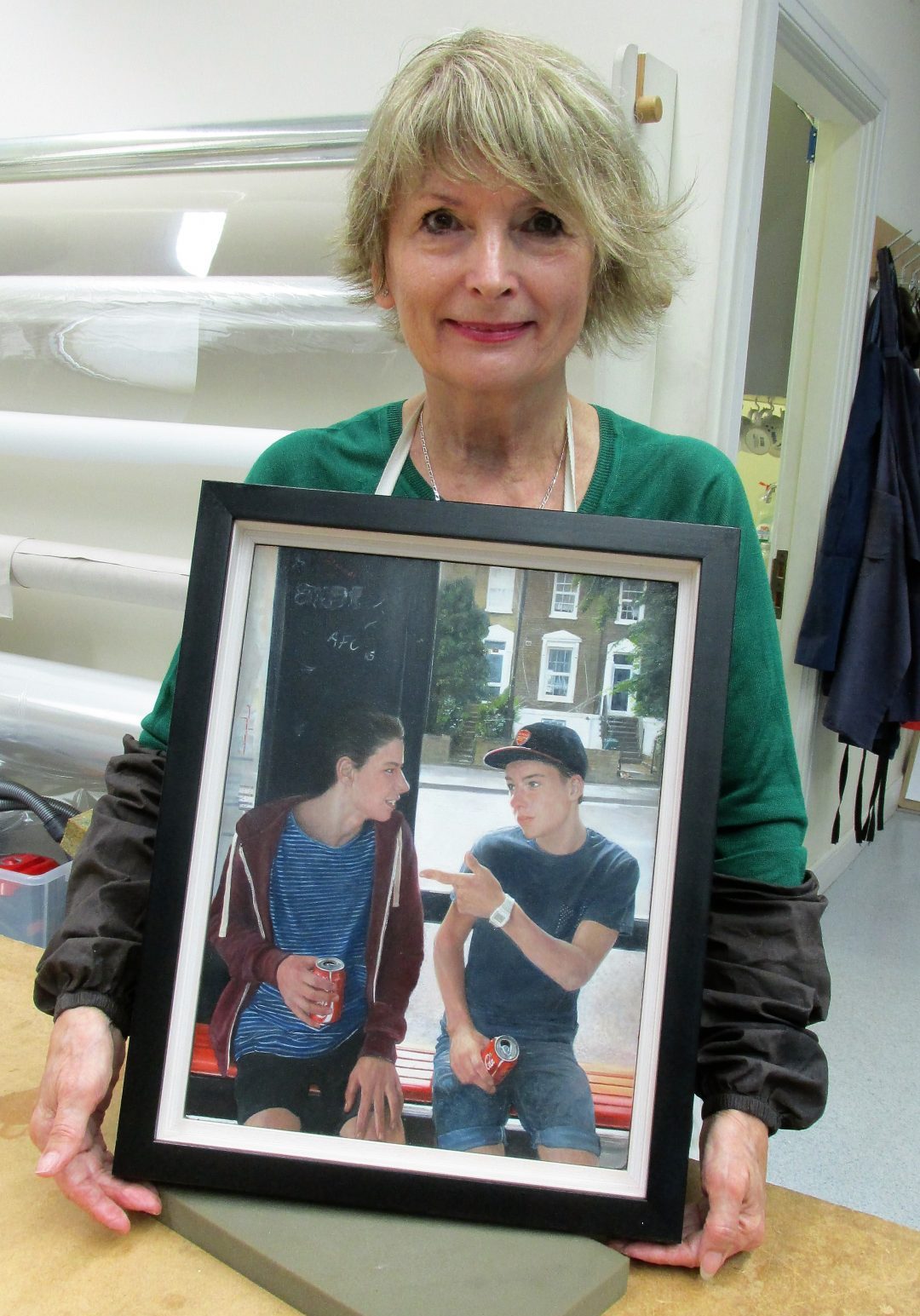 Teri Anne Scoble and her painting ‘The 271 to Arsenal’ (Photo credit: Lesley Scoble)

Lisa: What do you consider are the best and most difficult aspects of being a painter?

Teri Anne: The best aspect of being a painter is that whilst actually painting, you are living in the moment. The worst aspect is the isolation by spending hours at the easel. That is until my rescue dog Charlie came to stay. I highly recommend that every artist should have a studio dog.

Teri Anne: I am working on a seven foot high canvas of Edward Watson MBE, Principal dancer with The Royal Ballet. This is the largest painting and biggest challenge I have ever undertaken. 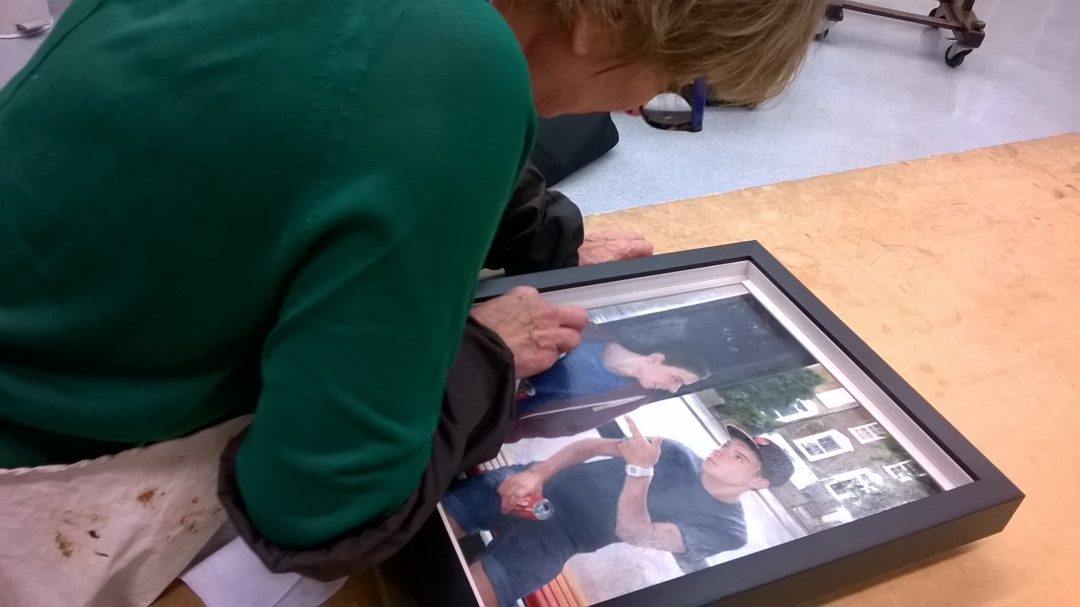