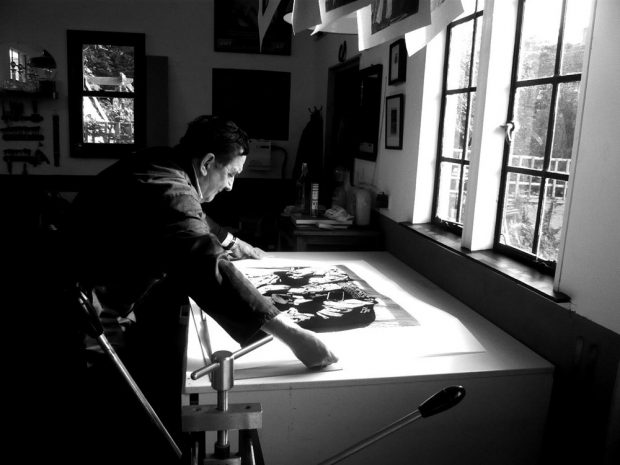 Chris Pig is a well-known printmaker of thirty year’s experience who mainly works in linocut and wood engraving. He is also the proprietor of Black Pig Printmaking Studio in Frome, a purpose-built printmaking studio. In this post, Chris recounts his experience using two printmaking products which have recently been added to the Jackson’s range, and which are integral to his working practice: Sunome Senaka Printmaking Paper and Van Son Rubber-Based Ink.

The first time I used Sunome Senaka was back in 1997. I was working on a very large expansive linocut and late in the day realised I hadn’t lined-up a paper to print it on. It took me months to find one that would work. For hand-burnishing with a baren, western papers are a non-starter; they aren’t manufactured for that purpose. So I had to trawl through every oriental paper I could find that was big enough. They all failed to give a decent impression because, as you burnish with a baren in outward, circular movements the paper stretches and ghosting results. 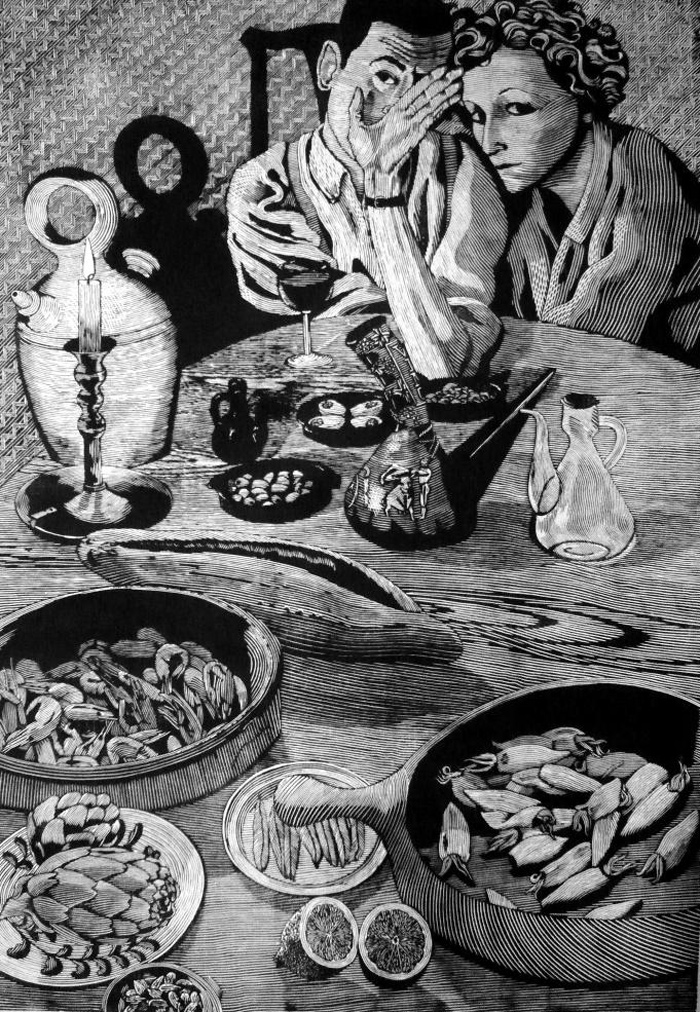 When a friend recommended Sunome Senaka it really was a revelation. It has a laid paper side and an absolutely sheer smooth side – you use the smooth side of course. Because of its size it’s a little unwieldy, but when manoeuvred into position and laid on the block, it sticks to the ink as if it were fixed by suction. It’s incredibly tough, very, very thin (52gsm) and extraordinarily cheap for a professional-standard paper. I do a lot of wood engravings which are very small and a sheet of Sunome Senaka can do a whole edition.

I have just built Black Pig Printmaking Studio in Frome; the architecture and dimensions were all worked-out with the dimensions of Sunome Senaka in mind. The roof is of an exact height where sheets of Sumome Senaka can hang from ball racks with enough space for people to work underneath. That paper is so important that the whole building was built to accommodate it! 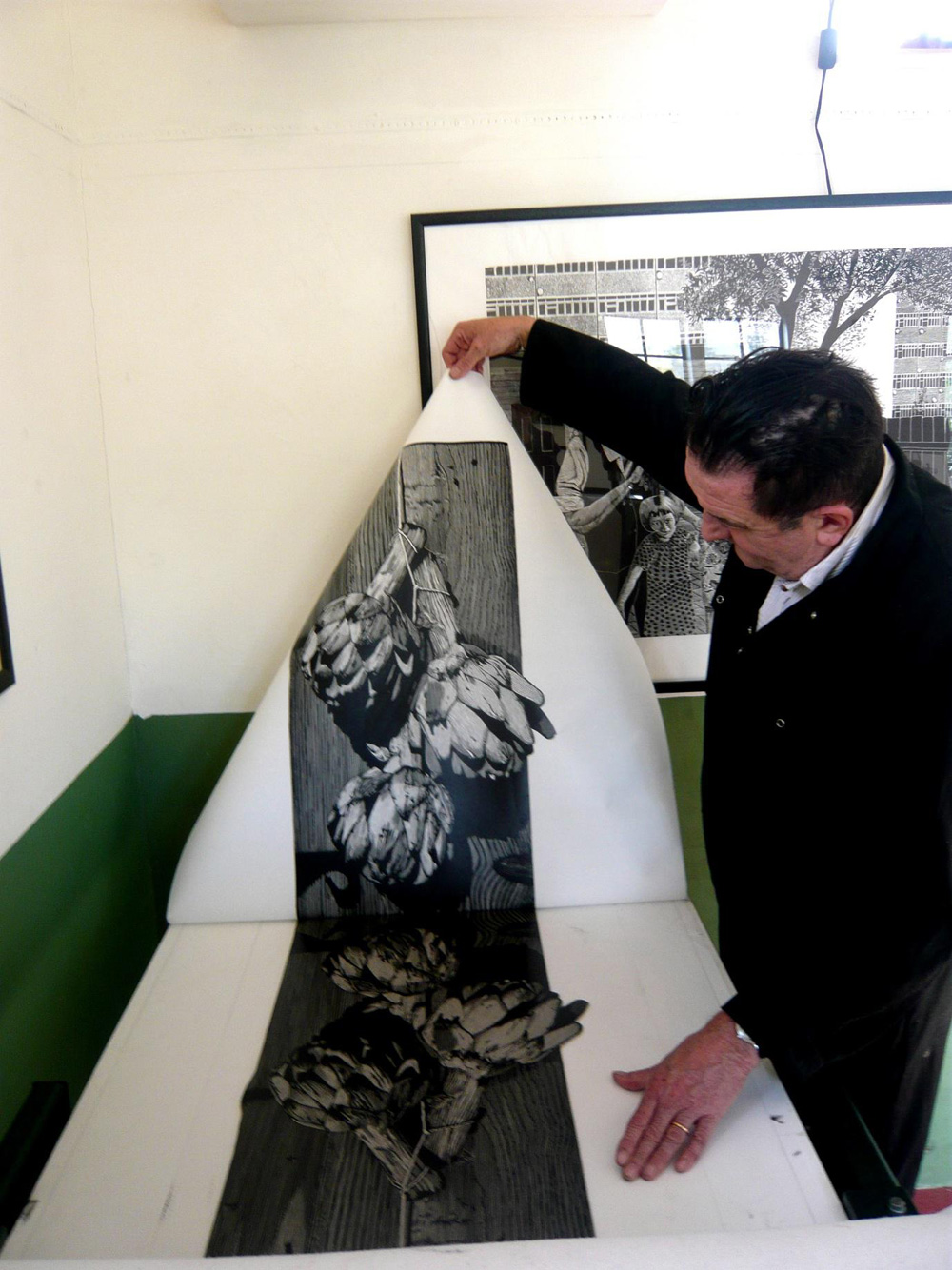 As for Van Son Rubber Based Ink, it was a similar story of trial and error. My prints, whether linocuts or engravings, combine two elements that are very difficult to print. Lots of fine gouge or burin-work on large fields of pure black. This presents the problem of retaining detail with non-solid blacks or losing the detail through bleed to obtain a solid black. It’s been the bane of my life for decades.

I was in Atlanta at the invite of my dealer Shawn Vinson for a show of my work. Some months before I’d made the acquaintance of Will Sergeant from a band called Echo and the Bunnymen, which will mean nothing to anyone born after about 1980 I suppose. We got on well and maintained contact.

Chris inking up a large block. 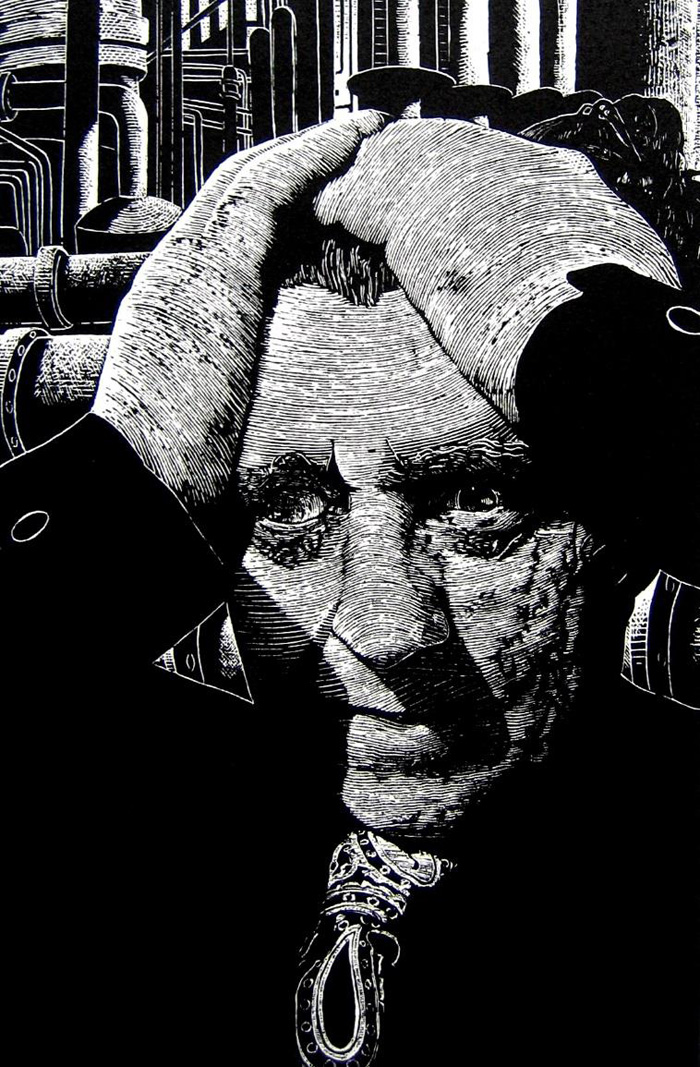 I was working on a piece about phobias for a show at the Freud Museum under the aegis of East London Printmakers. It was going nowhere so I asked him if he had any interesting phobias and he replied that he did. He was afraid of large industrial pipes, afraid that they would blow up at any second. So that was my cue. I got him to pose for a friend of mine and then worked with the resultant photos. It was a good image. Will liked the proofs and I decided to edition it at the Atlanta Printmakers Studio. The director, Kathy Garrou presented me with a tin of Van Son Rubber Based Ink. I inked-up and did a run-in and it was perfect. This almost never happens. I realised that the stiffness of the molecules kept the ink on the surface and prevented it from bleeding into the finer lines.

Materials do matter; they are manufactured to meet a remit. Those two products made an enormous difference to my working practice and saved me a great deal of time and money, reducing my wastage for an edition from 20% to practically zero.

Van Son Rubber Based Universal Ink (Black) and Sunome Senaka Printmaking Paper are available at Jackson’s. Interested readers can find out more about Chris Pig on his website.