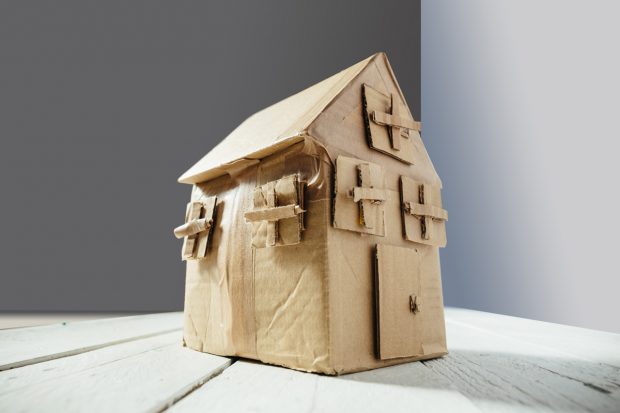 An Introduction to Drawing with Perspective

Perspective Drawing is an ancient drawing method dating back to the early 1400s – the first known picture to make use of linear perspective was Fillipo Brunelleshi’s depiction of the Baptistery in Florence, painted in 1415. In this blog post, I will explain the three basic forms of perspective (One Point, Two Point and Three Point), discuss their application and provide recommendations for further reading.

Perspective is a geometric drawing tool that is used to create a drawn record of the physical relationships between three-dimensional objects in space. It does this by recording how specific viewpoints warp objects’ height, width and depth, as well as the space between objects, therefore creating an illusion of a three-dimensional space on a two-dimensional surface (such as a piece of paper).

The four main elements used in perspective drawings are:

There are three basic kinds of perspective maps that can be used when drawing a scene: One Point Perspective, Two Point Perspective and Three Point Perspective. To help explain each kind as clearly as possible I will be using the same structure throughout each section of this blog post: an introduction, a more expanded technical explanation, then the application with painted examples. 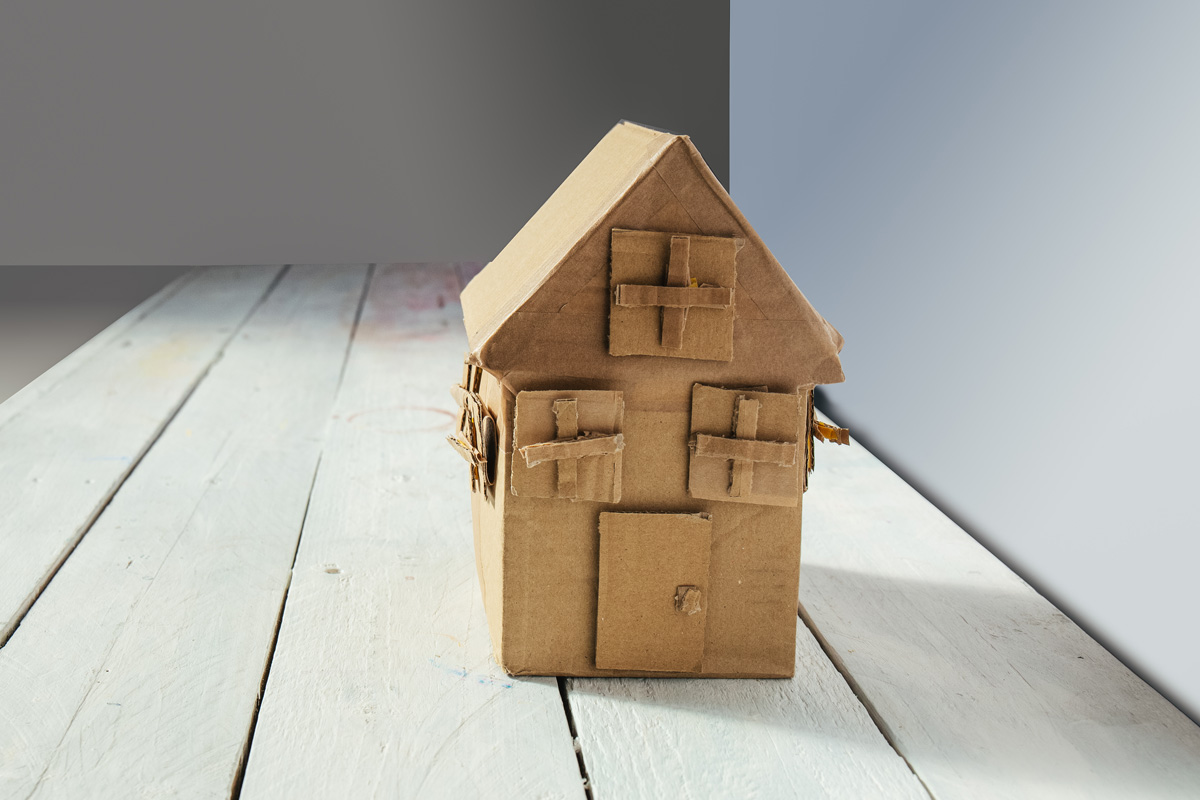 One point perspective is when there is only one vanishing point. Therefore, all the converging lines lead into one point on the horizon line. It is also known as Linear Perspective. 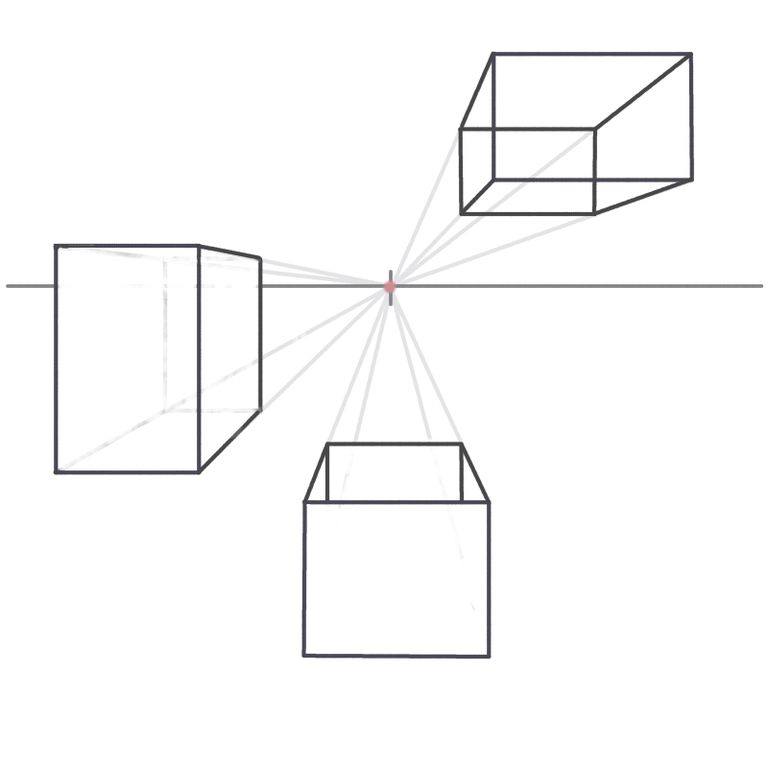 Consequently, the nearest element of a cube is its front surface. This is parallel to the viewer and is not warped at all. Up to two other sides of the cube can be seen, both of which quite dramatically warp in towards the vanishing point. If the cube is viewed directly over the one vanishing point, none of the sides can be seen as it is viewed exactly straight on.

This is the simplest form of perspective and provides images with a strong sense of depth (the most pivotal example of this is drawings of train tracks disappearing into the distance). It was also regularly used to give a clear focal point in classical painting as seen in Leonardo da Vinci’s painting ‘The Last Supper’ where the vanishing point is just above Jesus’ head, emphasising the notion that he is god and the creator of the world. Van Gogh utilizes the same technique for the opposite effect, using One Point Perspective to emphasise the compact nature of his bedroom in Arles. 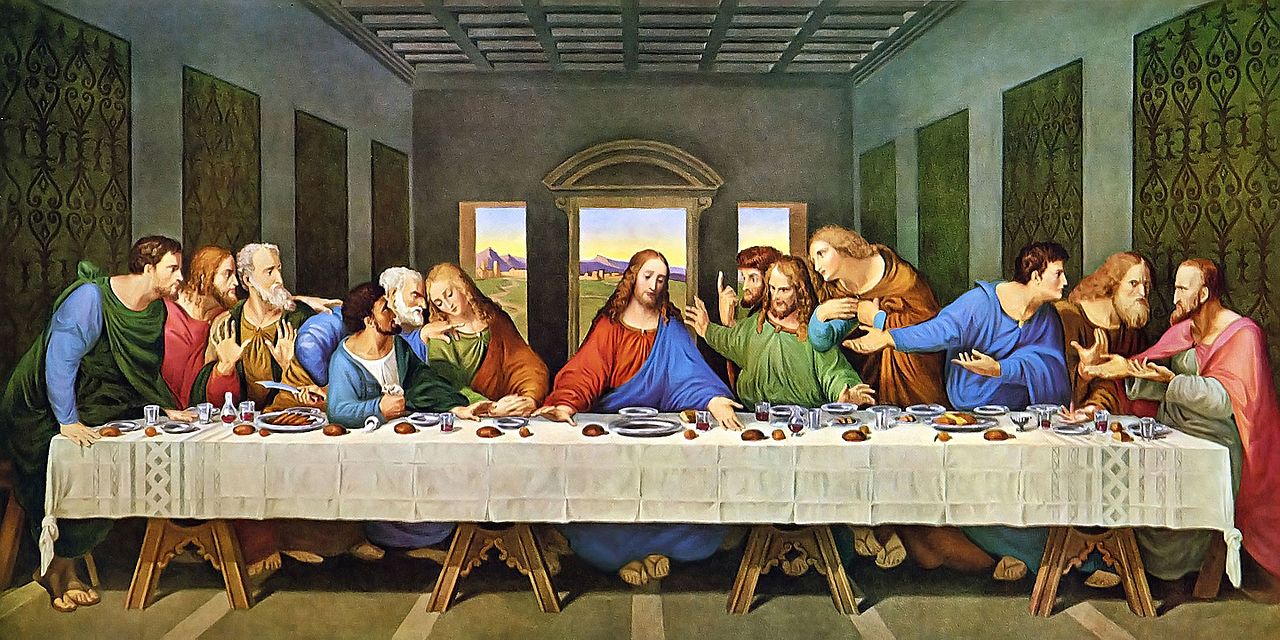 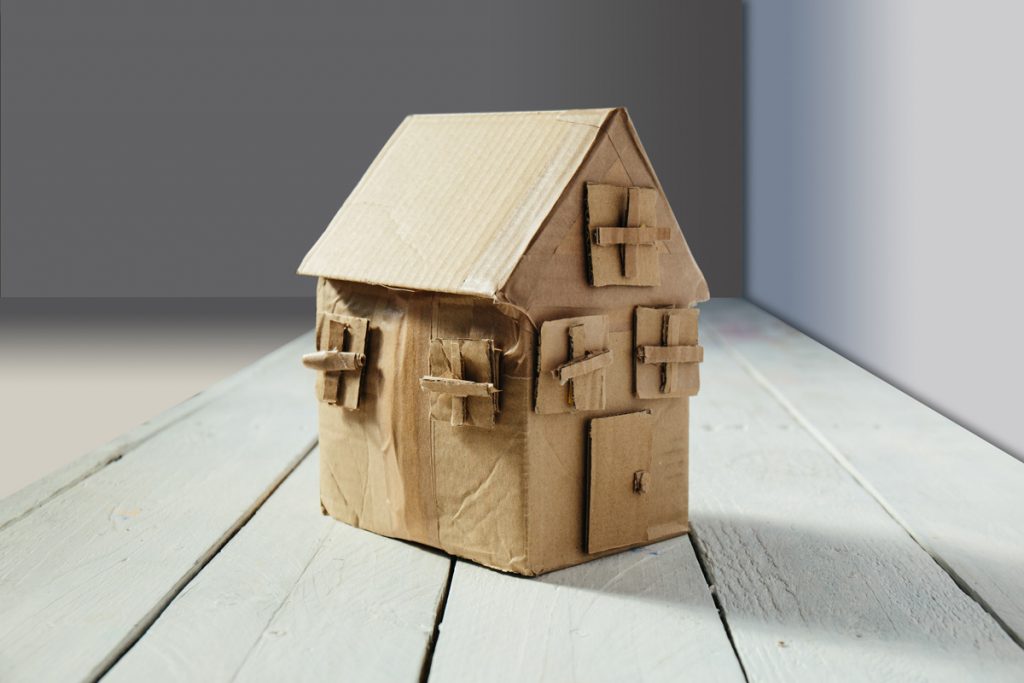 Two point perspective is when there are two vanishing points. Therefore, there are two sets of converging lines which lead out from two points on the horizon line.

Consequently, it is impossible to view any faces of a cube exactly straight on (like in Single Point Perspective) meaning the nearest element of a cube is a always front edge. This nearest edge is parallel to the viewer while its three attached sides warp away towards each vanishing point. Two Point Perspective drawings of cubes to contain more information than One Point Perspective renderings, allowing more complex spaces to be drawn.

Drawing in Two Point Perspective is great for rendering still life arrangements, landscapes such as street corners and scenes with multiple focus points. Edward Hopper regularly uses Two-Point Perspective throughout his work: his etching, ‘The Cat Boat’ displays the boat in the same cubed way as a still life arrangement would, and his famous painting ‘Nighthawks’ gains a sense of depth due to his use of two vanishing points. 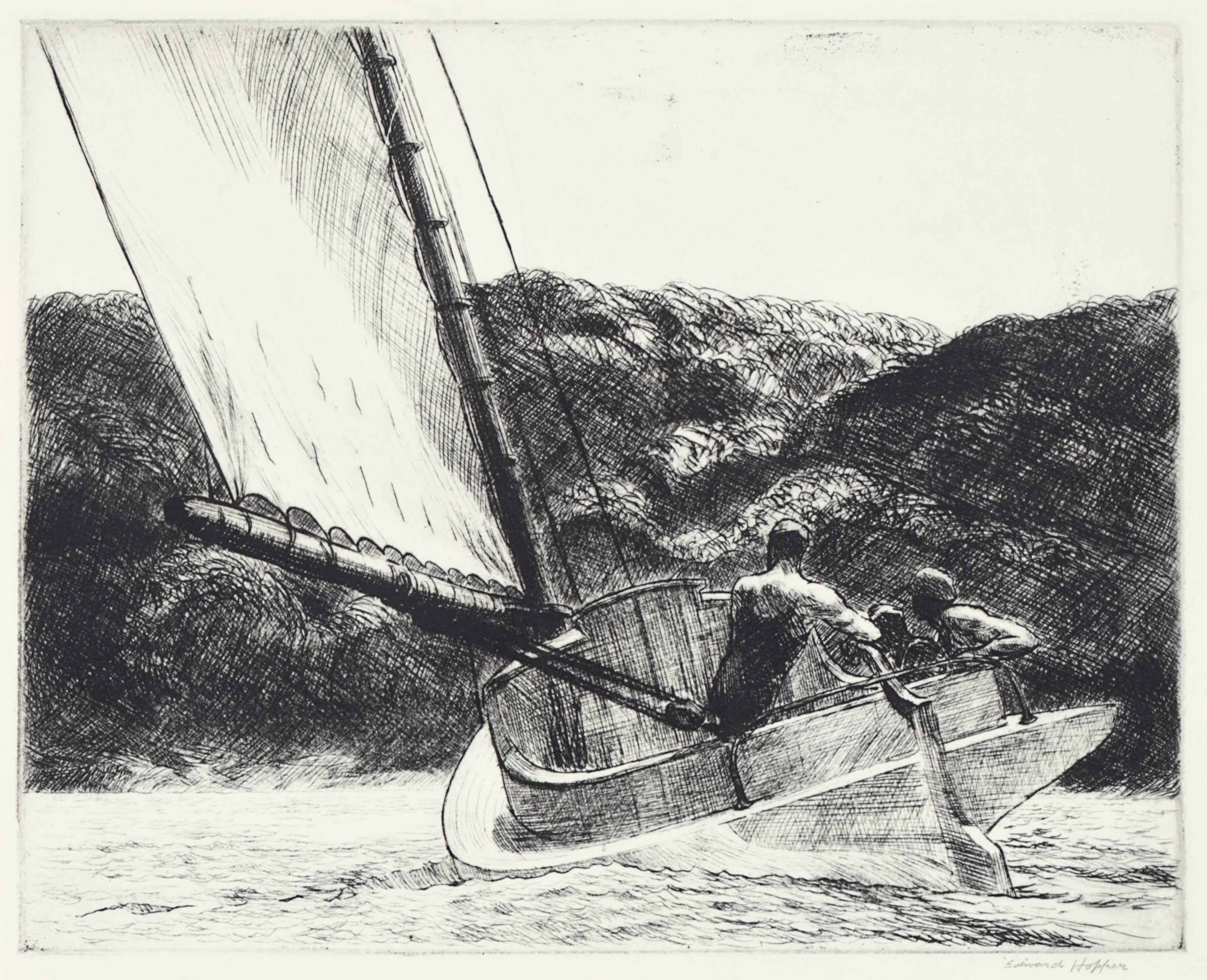 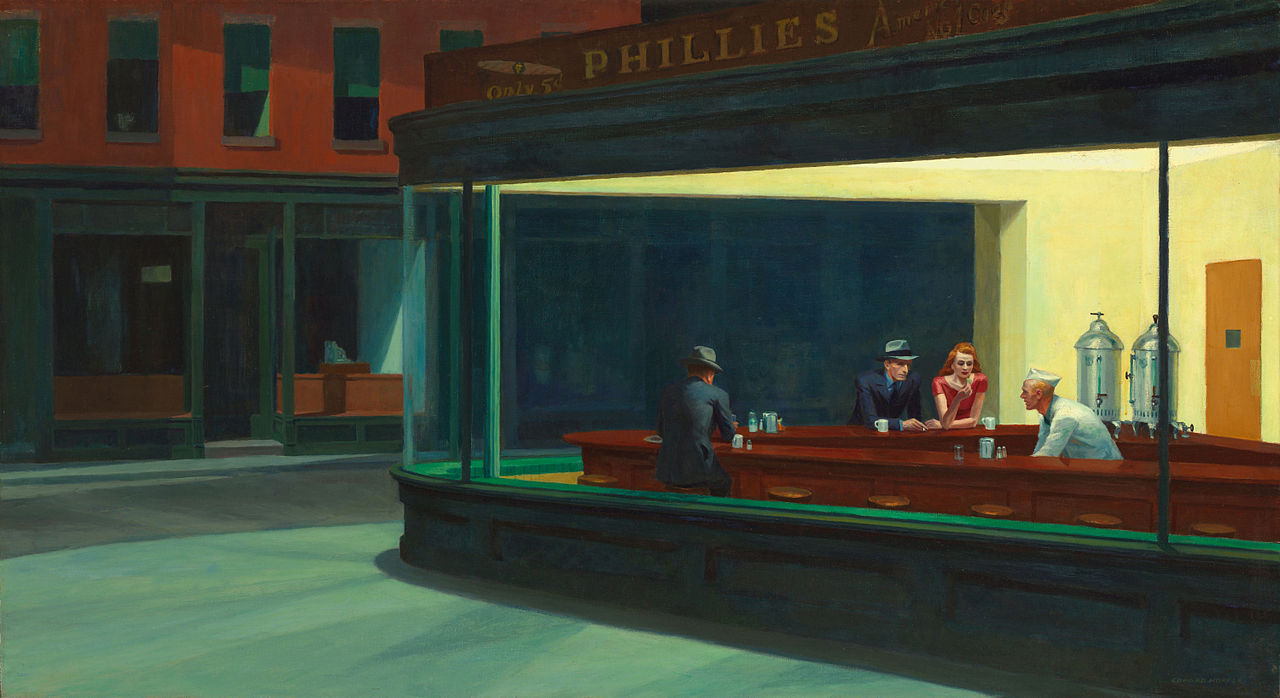 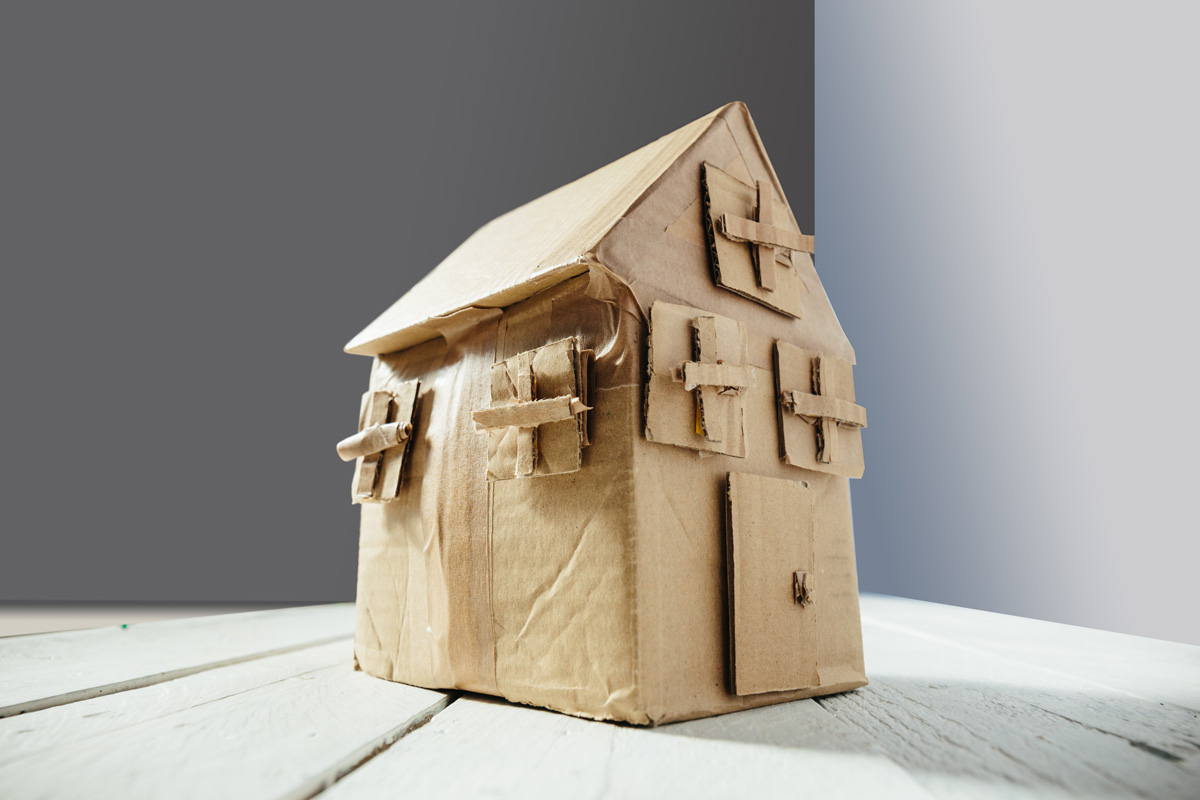 Three point perspective is when there are three vanishing points – two on the horizon line and one placed above or below the horizon line. Therefore, all the converging lines in the image will converge in one of three places. 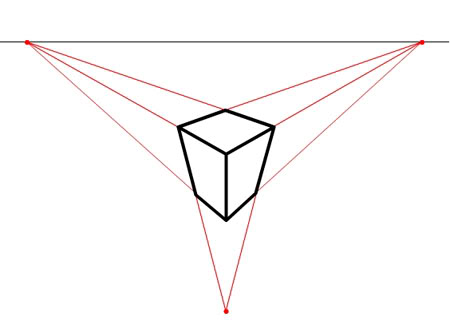 Consequently, the cubes in the image are being warped in multiple directions and none of their faces or edges are parallel to the viewer. This extra vanishing point (and resulting warping) allows artists to create drawings of spaces from exaggerated viewpoints such as an ant looking up at a building, looking down at a city from a balcony, watching a punch swing towards the frame etc. All kinds of perspective root the viewer in an image and give a clear indication of their relationship to the space, but three point perspective offers the greatest opportunities for artists to highlight the viewers’ size in comparison to the rest of the image.

Drawing in Three Point Perspective can be used in a very obvious manner (such as action scenes like Spiderman flying through a city or someone dangling from a balcony) or can be very subtle to create immersive works. David Hepher’s work is a great example of how to use Three Point Perspective in a subtle manner to give a sense of size –  the building in the centre of his painting ‘Durrington Towers IV, 2007’ slightly leans away from the viewer to emphasise its immense size. Colin Chilag’s still life paintings also occasionally employ Three Point Perspective – the vertical warping in his painting of a bathroom gives the work a far more immersive feel as you see the room from the point of view of someone stood in it rather than if you were looking into a dolls house. 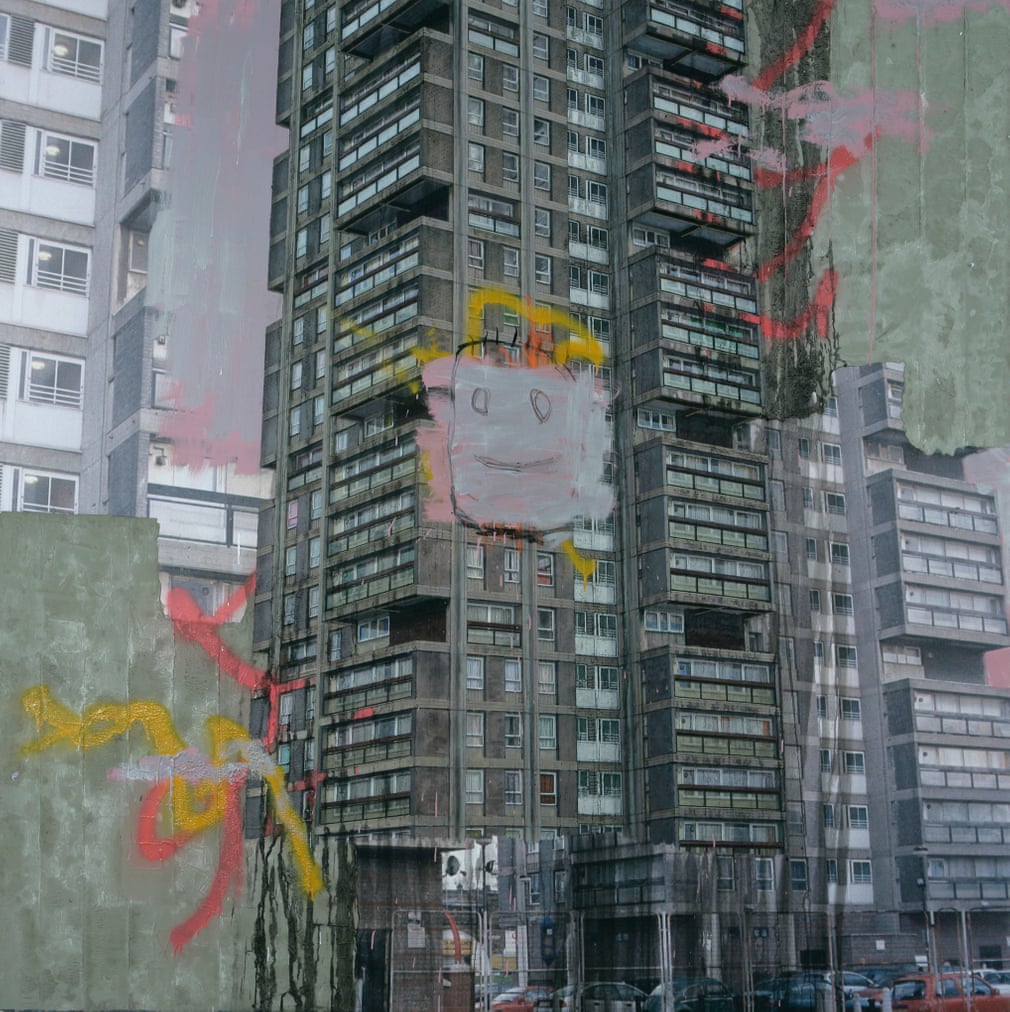 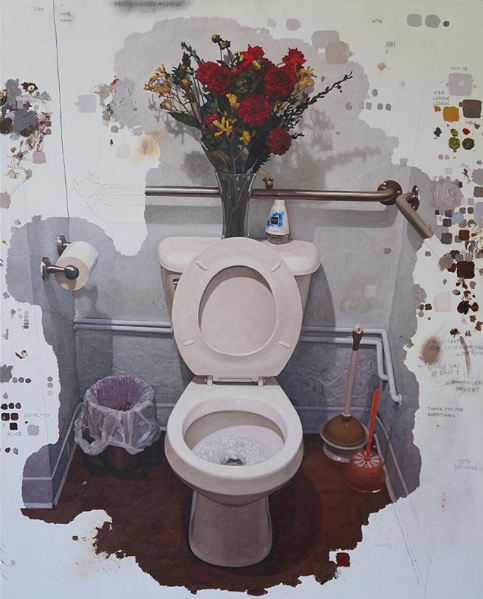 Although these three structures for drawing may seem quite rigid, there are many, many ways to use them, expanding far beyond their traditional application explained above. Cubism, one of the most influential art movements pioneered by Pablo Picasso and Georges Braque, utilised the core concepts of perspective drawing yet completely reimagined its application, resulting in paintings that present objects from a myriad of angles simultaneously to represent subjects in a greater context than just a single viewpoint. Grayson Perry’s phenomenal tapestry ‘The Annunciation of the Virgin Deal, 2012’ utilises multiple types of perspective throughout different sections of the image to create a sense of narrative between scenes and subjects. Francis Bacon even utilises the perspective cube in his paintings, boxing in his figures as seen in his work ‘Seated Figure’ 1961. 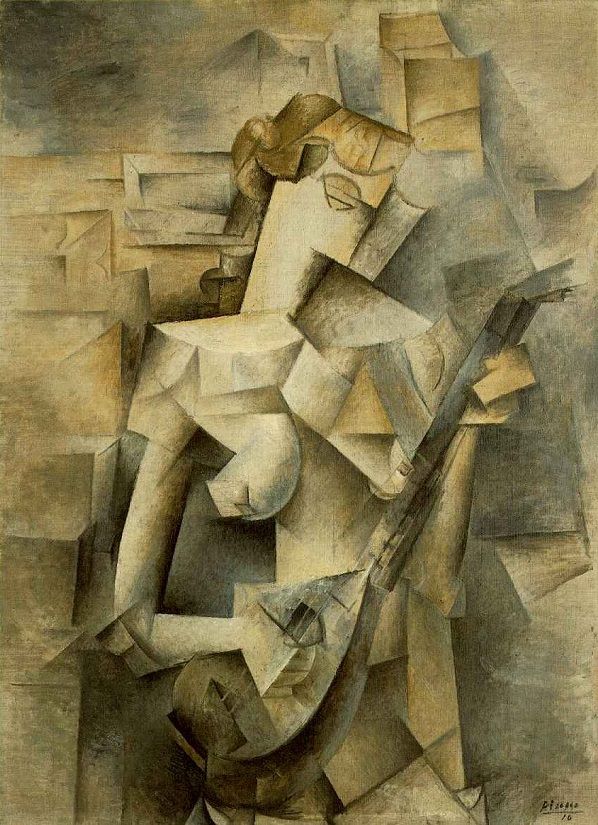 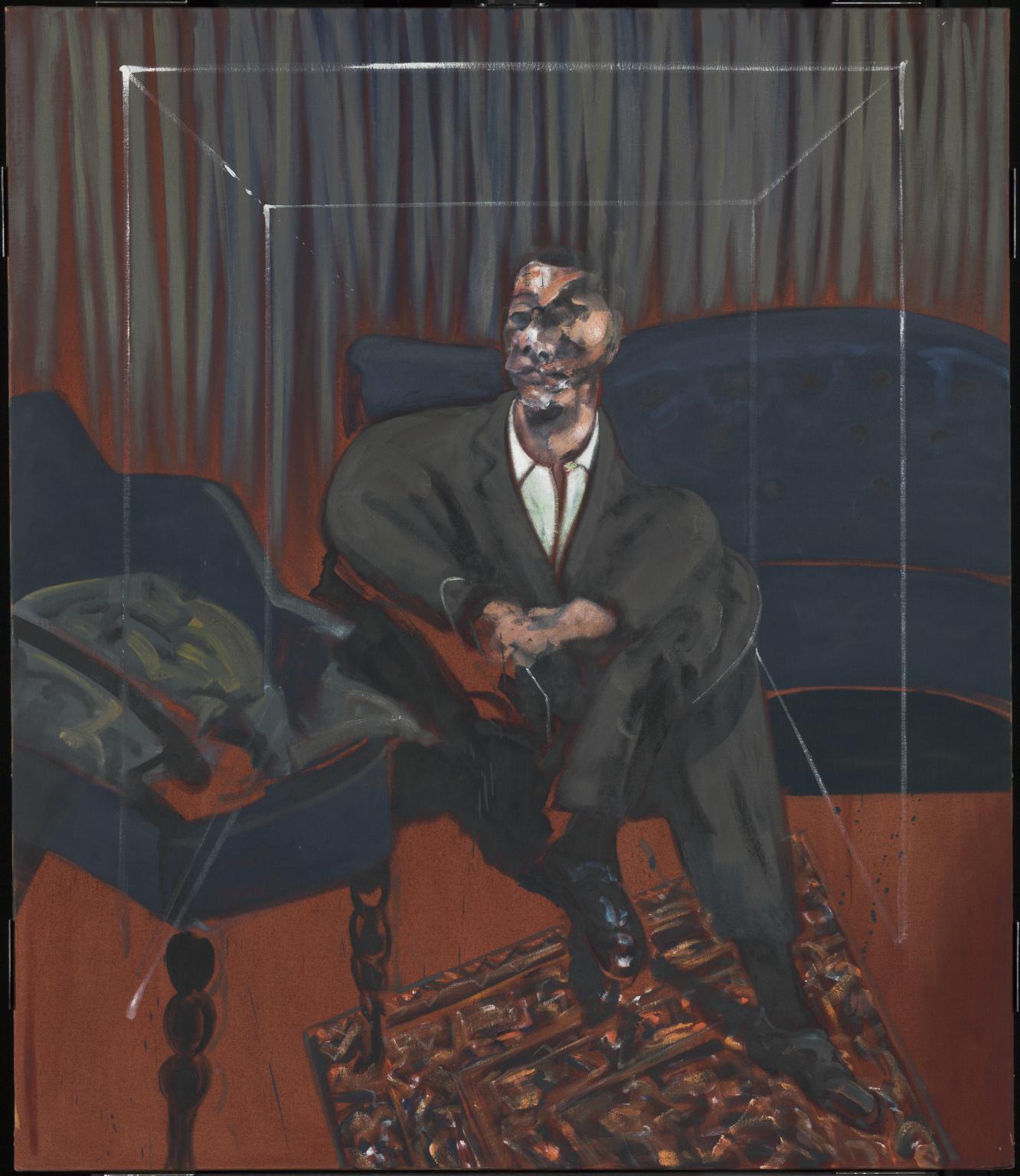 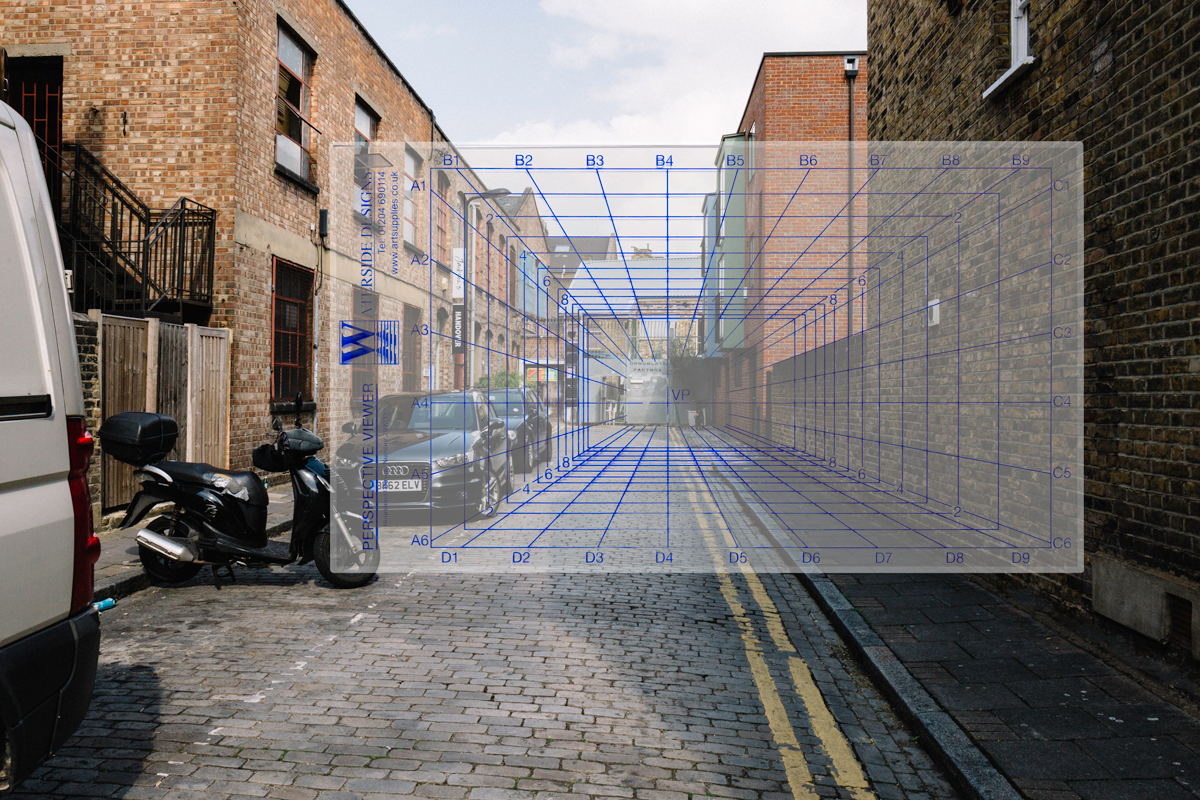 Jackson’s stock various pencils, rulers and studio essentials that can be used to aid drawing in perspective. One of the most specialised tools we sell is Waterside Design: Perspective Grid. This clear grid can be held up to landscapes (as demonstrated in the above image) to help locate vanishing points, horizon lines and strong lines of convergence.

Perspective Made Easy by Ernest Norling

This concise and exhaustive book, devoted entirely to clarifying the laws of perspective, leads the reader through every important concept regarding perspective. It’s simple and easy to follow, with over 250 simple line drawings.

In this book, the UK artist and tutor Tim Fisher explains how to understand and master the concept of perspective, which is the key to producing sketches and finished artworks with convincing depth. Fisher begins by demonstrating the use of perspective when drawing architecture and landscapes, before applying the same principles to still lifes and portraits. He provides advice on drawing curved objects and inclined planes, while also demonstrating the use of multiple-perspective points.

A watercolour manual for landscape painters. It features substantially expanded and revised chapters on the key tenets and techniques of perspective, along with wholly new artworks and two new step-by-step paint-along projects.

How to see it, how to draw it: the Perspective Workbook by Matthew Brehm

Perspective is an essential skill for anyone who wants to draw or paint in any genre and in any medium. Matthew Brehm teaches you how to understand and apply this intuitive skill in this reference book, packed full of exercises and a unique image quiz to practice putting your observational skills to the test. By the end of the book you will be able to apply perspective without a ruler or drafting table!. There is also a 30-page workbook to hone your skills.