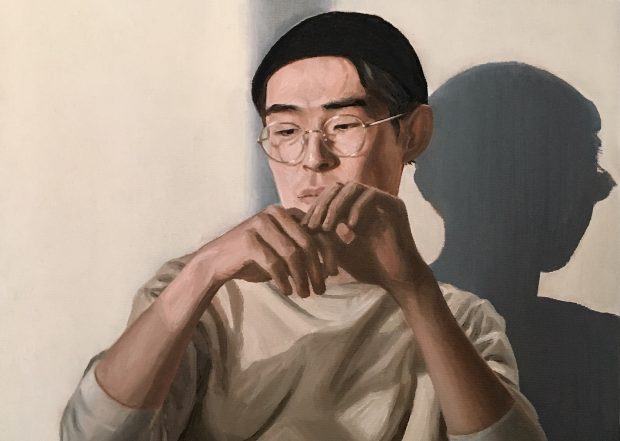 William GC Brown’s painting ‘Renda/Mirrored’ was shortlisted for the Jackson’s Open Painting Prize 2019. A female figure sits in a chair by a window. The smooth sophisticated handling of the paint, with a near photographic quality, serves to make the colour relationships within the work all the more intriguing. This painting is not what it seems at first glance. It is reality imbued with a sense of visual poetry, where interiors and figures are intrinsically linked with what’s outside, or is it the other way around? This interview delves deeper into the thought processes and painting approaches of William GC Brown, an artist whose background in psychology is ever present in his painting. 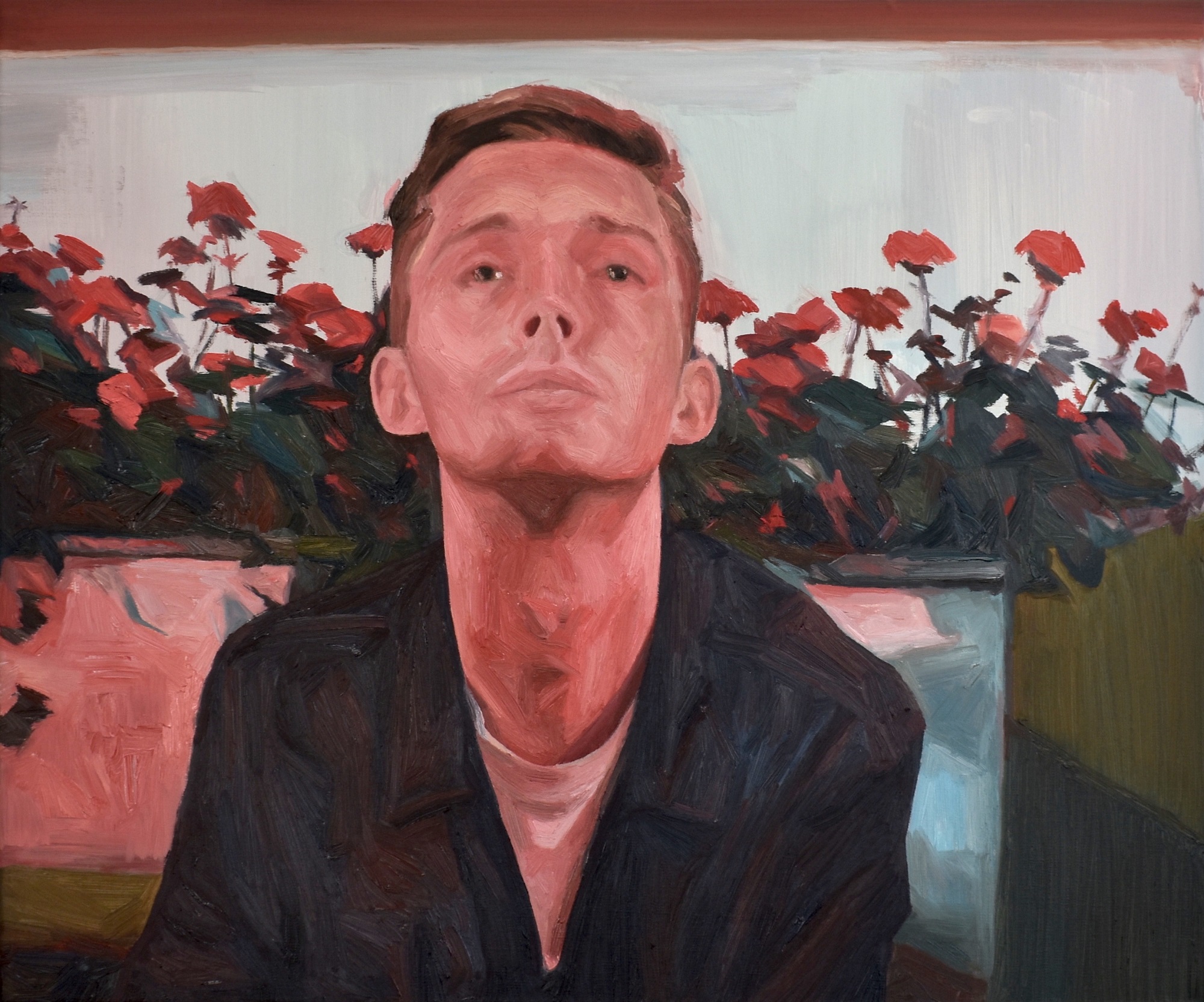 Lisa: Can you tell us a bit about your artistic background?

William: Painting and drawing is just something I’ve always done. Art was my strongest subject through school but I only began to take it seriously at around 15, after seeing the Francis Bacon retrospective at the Tate and deciding to take up oil painting. Years later when it came to choosing what to do at university I actually decided not to study art and instead studied psychology. I still wanted to pursue art, but as I was interested in painting people I felt that learning about the mind would be more beneficial to my development. I also felt that painting portraits was the best way for me to improve as a painter, and I wasn’t sure that I would really be able to focus on that at art school. Since then I have just continued to paint and develop. 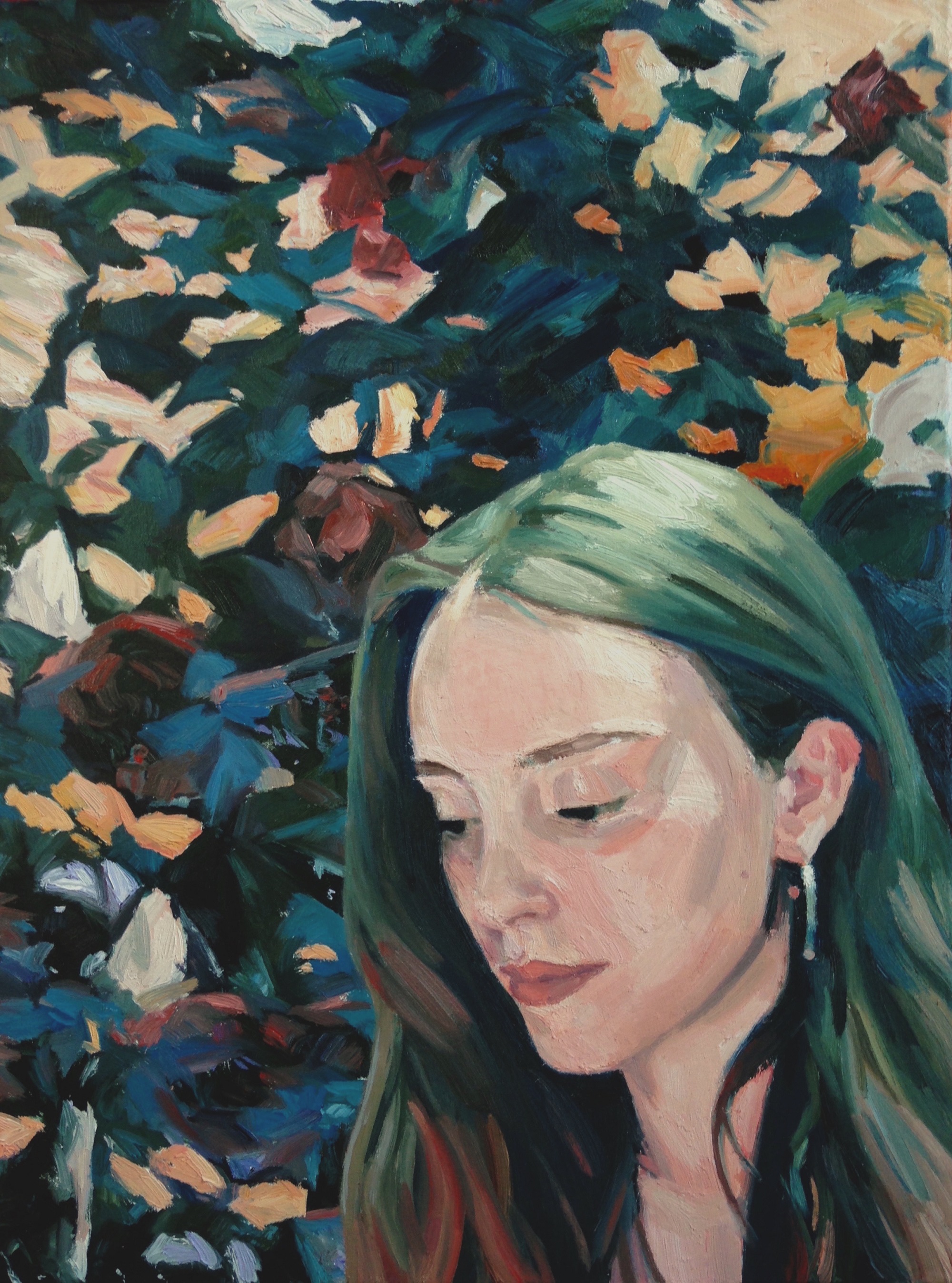 Lisa: Do you think you have been at an advantage or a disadvantage having not gone to art school with regards your painting development?

William: It’s hard to say, I think it has both hindered and benefited me in different ways. Had I studied art I don’t think I would be making the work I am starting to make now. As I mentioned, I believed that the best way for me to develop my technique was through portrait painting and so I pursued that on my own terms, learning how painters like Freud and Tai-Shan Schierenberg operated, gradually painting more challenging compositions and gaining confidence. However, conceptually it has taken me a long time to develop. I was largely following other painter’s footsteps and I was unable to have much critical discourse about art during my time at university. That is where an Art degree would have helped. Though studying Psychology now directly informs my work, it is only in the last few paintings that I have begun to find my own voice – perhaps this is just a by-product of me maturing, spending time with other artists and becoming more self-assured as a painter. 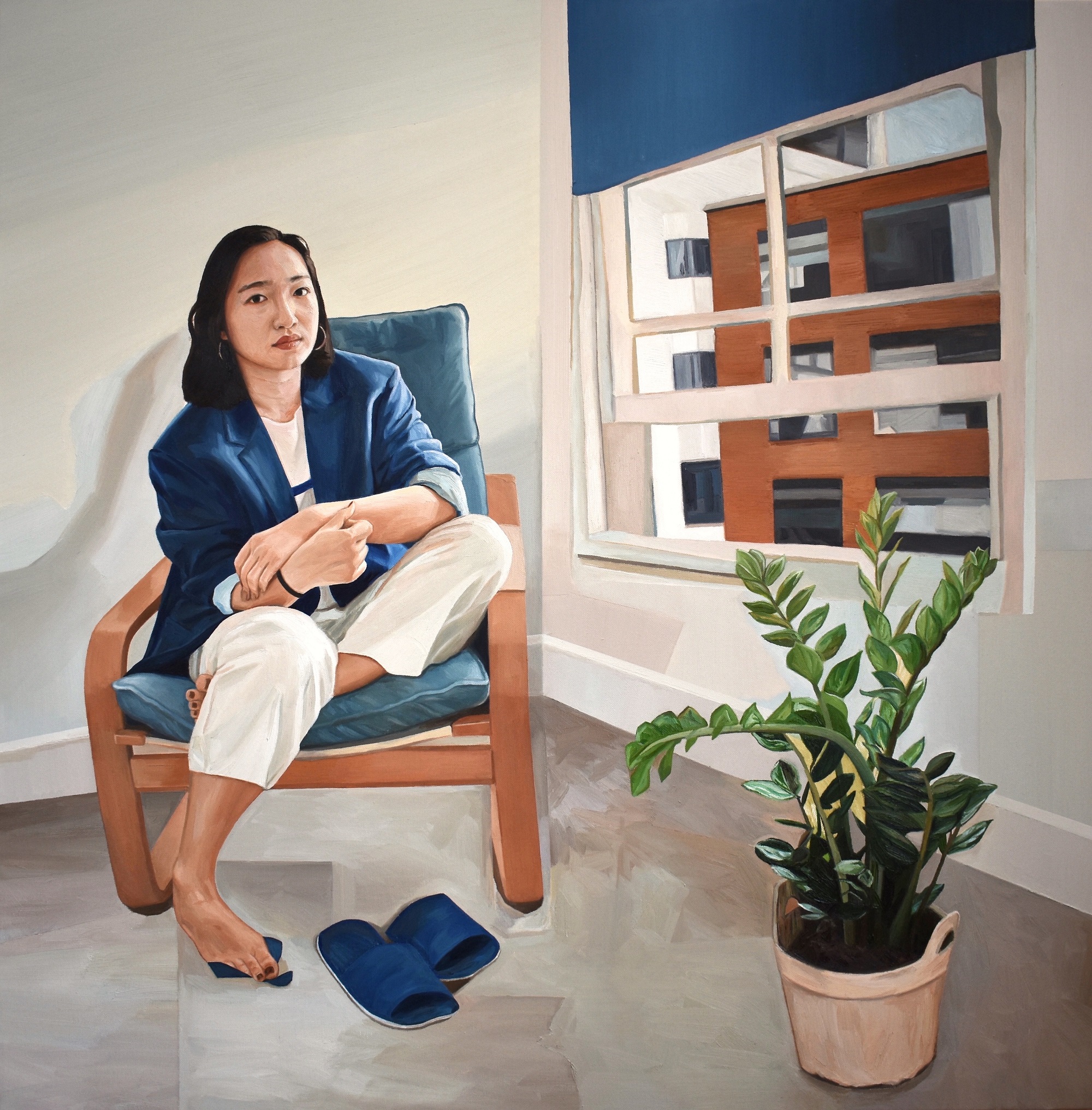 Lisa: Can you tell us about the idea development for ‘Renda/Mirrored’?

William: The idea for ‘Renda / Mirrored’ came out of an ongoing series of paintings where I had been abstracting and reassembling different observations and memories, piecing them together to reflect the way we make sense of the world around us. Specifically in the case of ‘Renda’, the painting was about a relatively simple idea, but one I wanted to visualise. We are said to be products of our environments, we curate to a certain extent what’s around us, but are then in turn affected by them, sometimes it’s hard to determine a cause and effect. So this painting presented a sitter whose clothing and posture was seen to be mirroring the objects in her environment.

Lisa: And can you tell us a bit about the colours you used – I particularly love the repeating passages of blue that cascade from the blind, down to the lady’s jacket and shoes…in fact the colours and how they balance between inside and out really hold one’s attention…

William: The use of blue throughout was a way of expressing that relationship between Renda and her surroundings, but it’s also a strong colour and one that was in keeping with her personality. She of course chose the blue herself so that felt like a good starting point for the composition. With regards to the way the colours are balanced across the rest of the painting, it seems to be something that is visible in a lot of my other work. I like the different elements within the paintings to relate to one another, I tend to avoid any tones that might stick out too much, and so it is crucial to me that all the colours are in check. 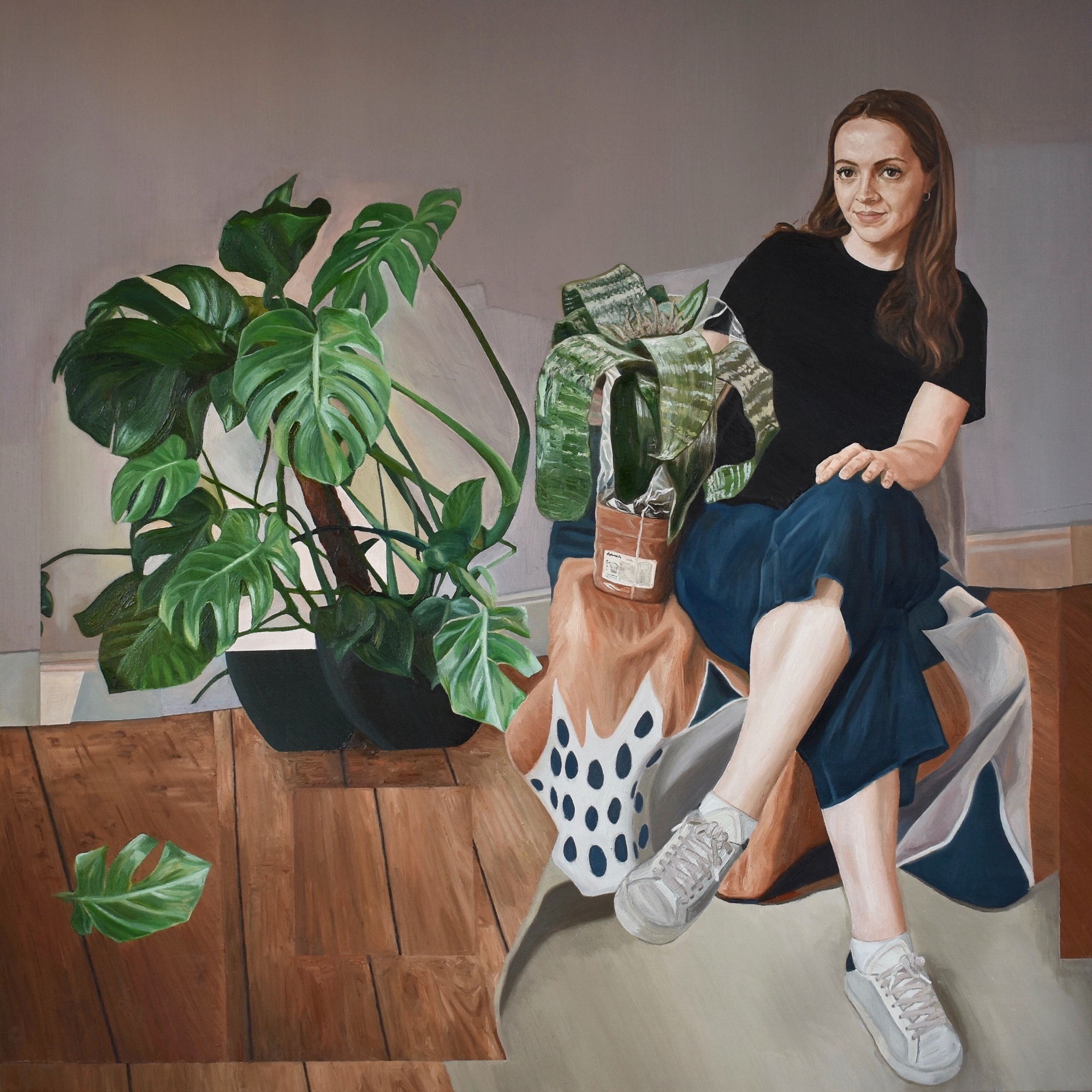 Lisa: Was it important who the sitter was for this painting?

William: It was really important, as a lot of the initial ideas for my paintings are generated by spending time with certain people I meet or know very well. They may have a particular personality or look that I think would work well in a painting, but that being said I’m really not that interested in painting people for the sake of capturing a likeness. I paint people that I find engaging and that don’t expect to be flattered as part of a traditional portrait. The paintings are more conceptual now than they were, for me the sitter is best seen as a tool for expressing some of the ideas behind the paintings, and yet paradoxically that sitter couldn’t just be anyone. Whether the sitter is aware or not, the paintings are somewhat collaborative. 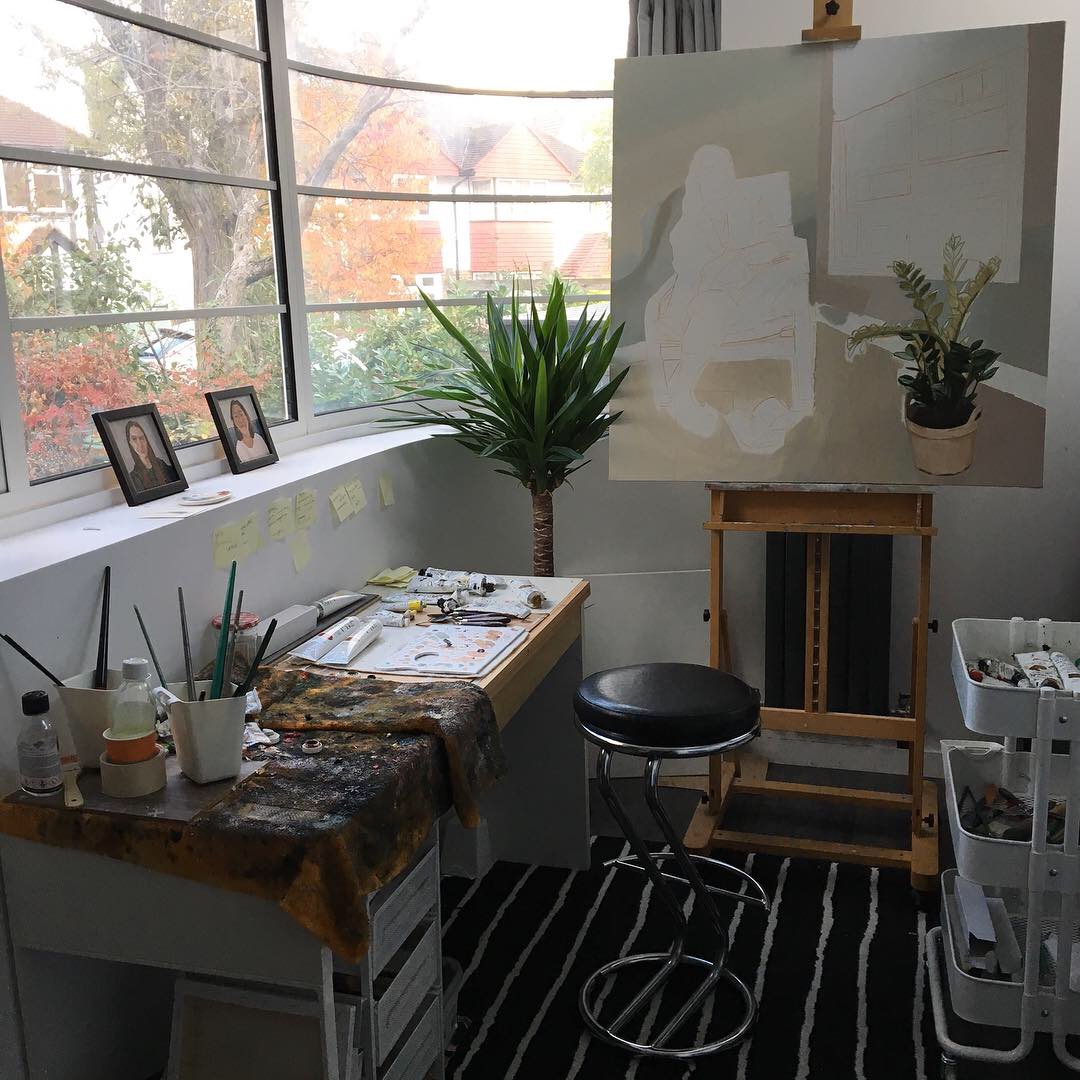 Lisa: How often do you get to paint in a usual week?

William: I am very lucky at the moment in that I get to paint every single day. Since uni I have balanced my time between painting and working different jobs related to psychology. I will tend to work 9-5 for a stretch of the year, paint in the evenings, save money, then pursue art full-time for the rest of the year. Currently, I’m at a stage in the cycle where I’m painting full-time, and I’m very much focused on building a body of work. The freedom that working other jobs gives me, in that I don’t need to sell work unless I choose to, is something I’m really grateful for, and I think it should stand me in good stead for the future. 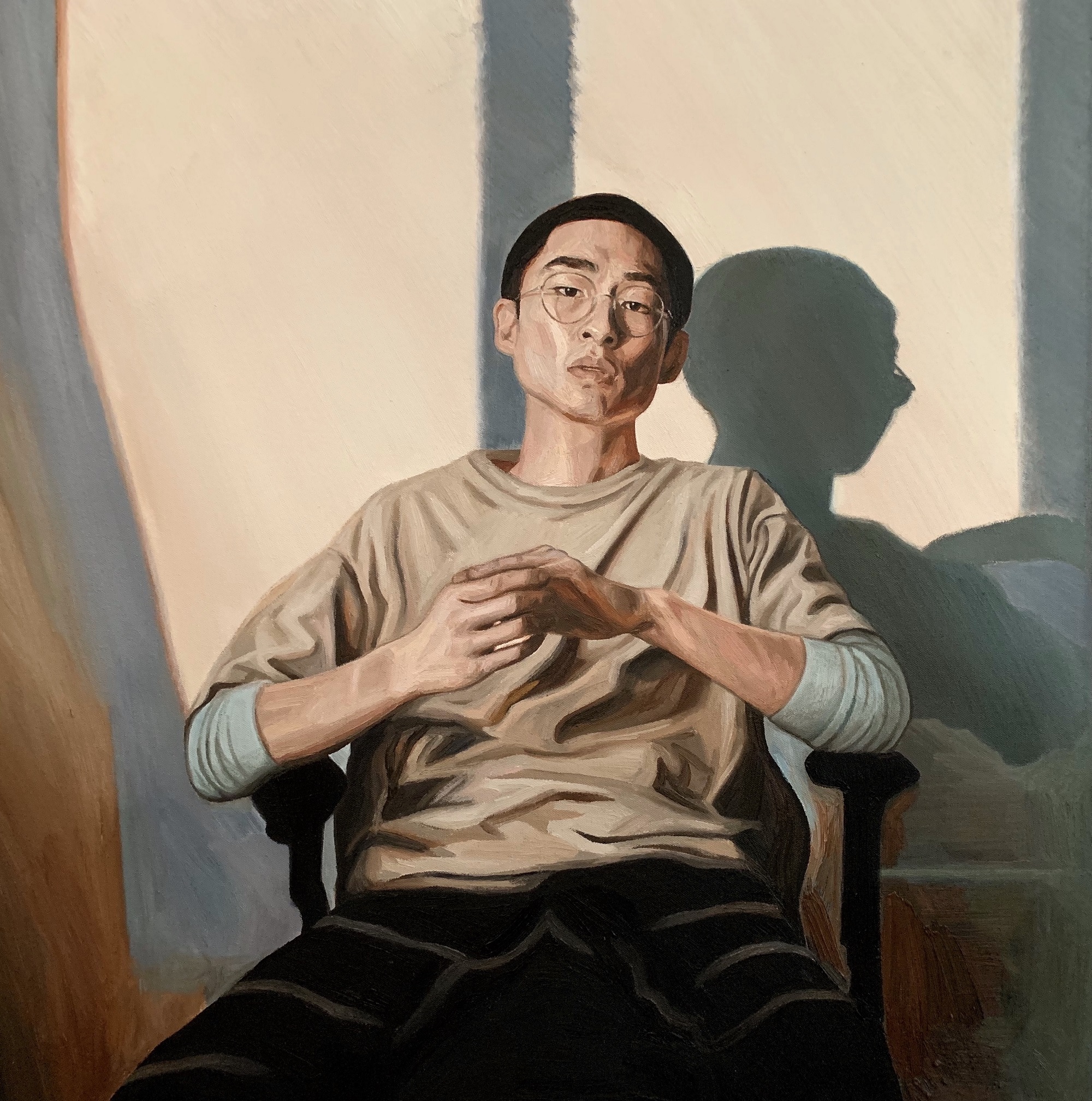 Lisa: Are there any paints that you love in particular?

William: I love the Winsor and Newton Artists’ Oils as the colours are richer than the student range but still go a lot further. In the past I haven’t added any medium and still found that one tube of professional paint can last as long as two student tubes. I can also control their colours better than other pro paints as they are slightly more subtle. That being said, I recently switched to the Michael Harding Warm White which I love and I use the Michael Harding Titanium Dioxide a lot – it’s a grey, yellowish brown which is really useful in backgrounds. 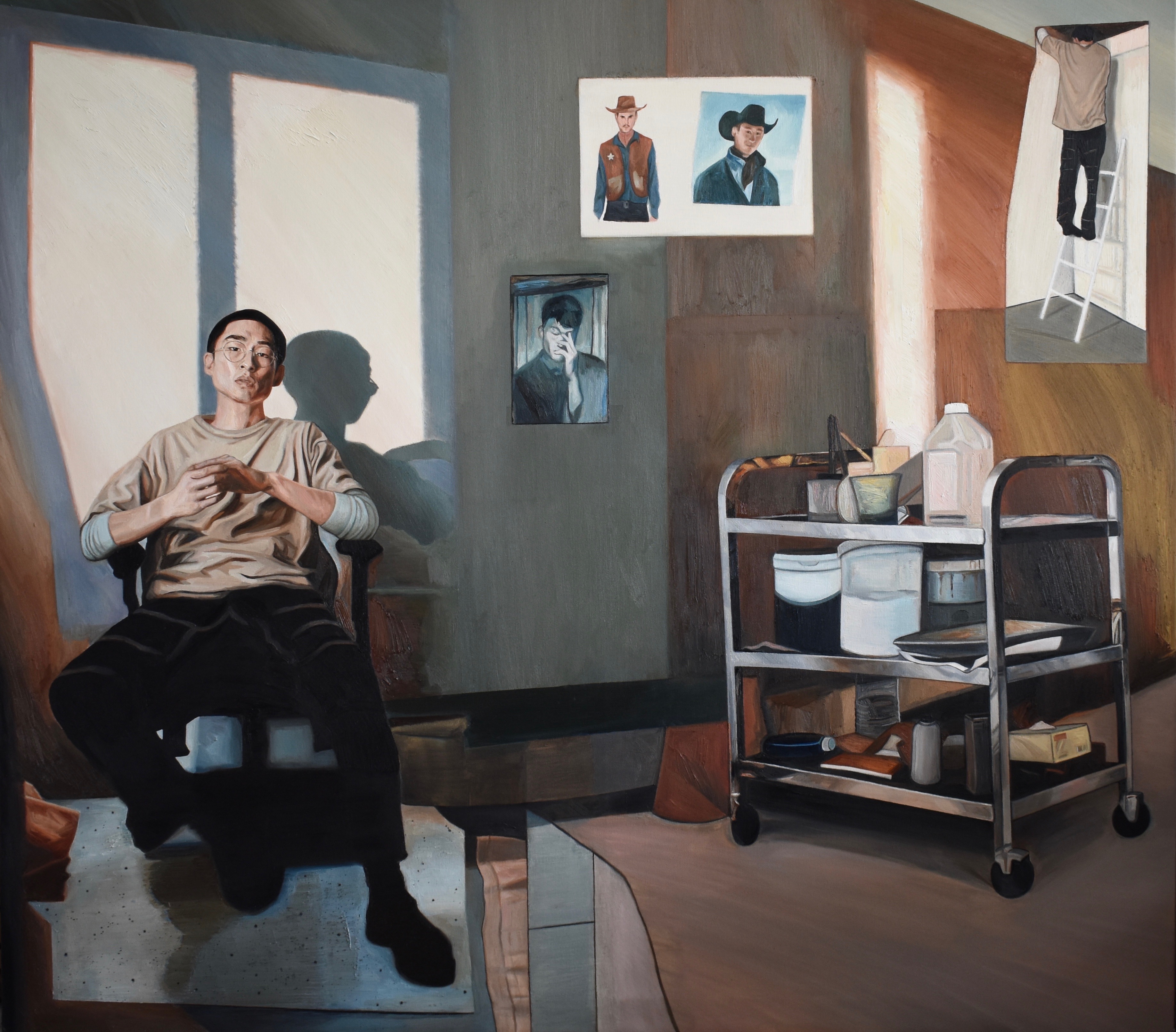 Lisa: What are you ideal conditions for painting?

William: I don’t have any ideal conditions to be honest! I very recently moved to a new studio as I have started to paint larger pictures, so having enough room is a must, but other than that I just paint, every day is different. 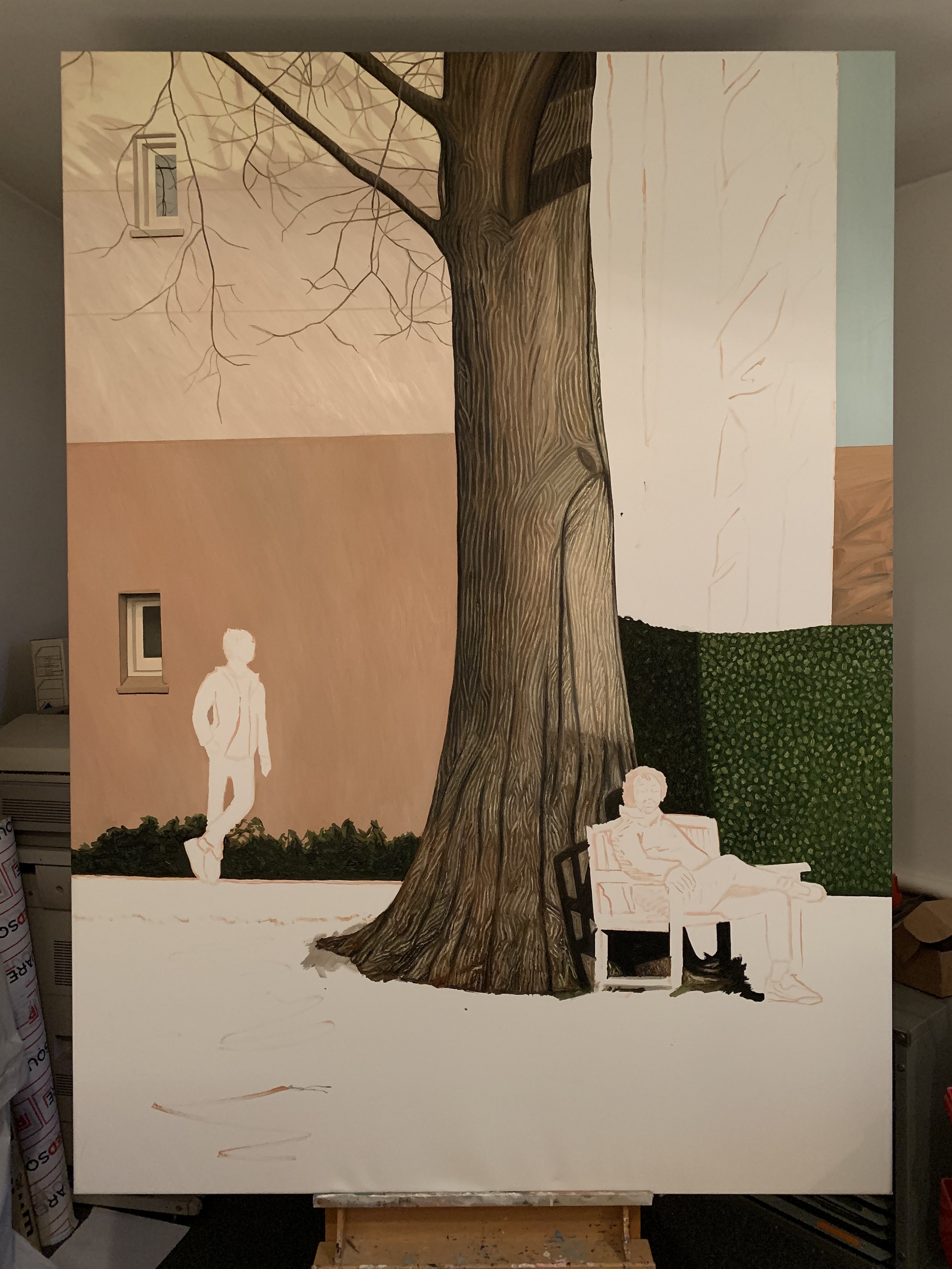 William: At the moment I’m continuing this series of paintings where the compositions are pieced together from different observations, they are much bigger than I am used to painting (close to 2 by 2 metres), the latest one has a big tree down the middle. I’m hoping to finish one a month until the end of the year, after that I don’t know what I’ll be doing! 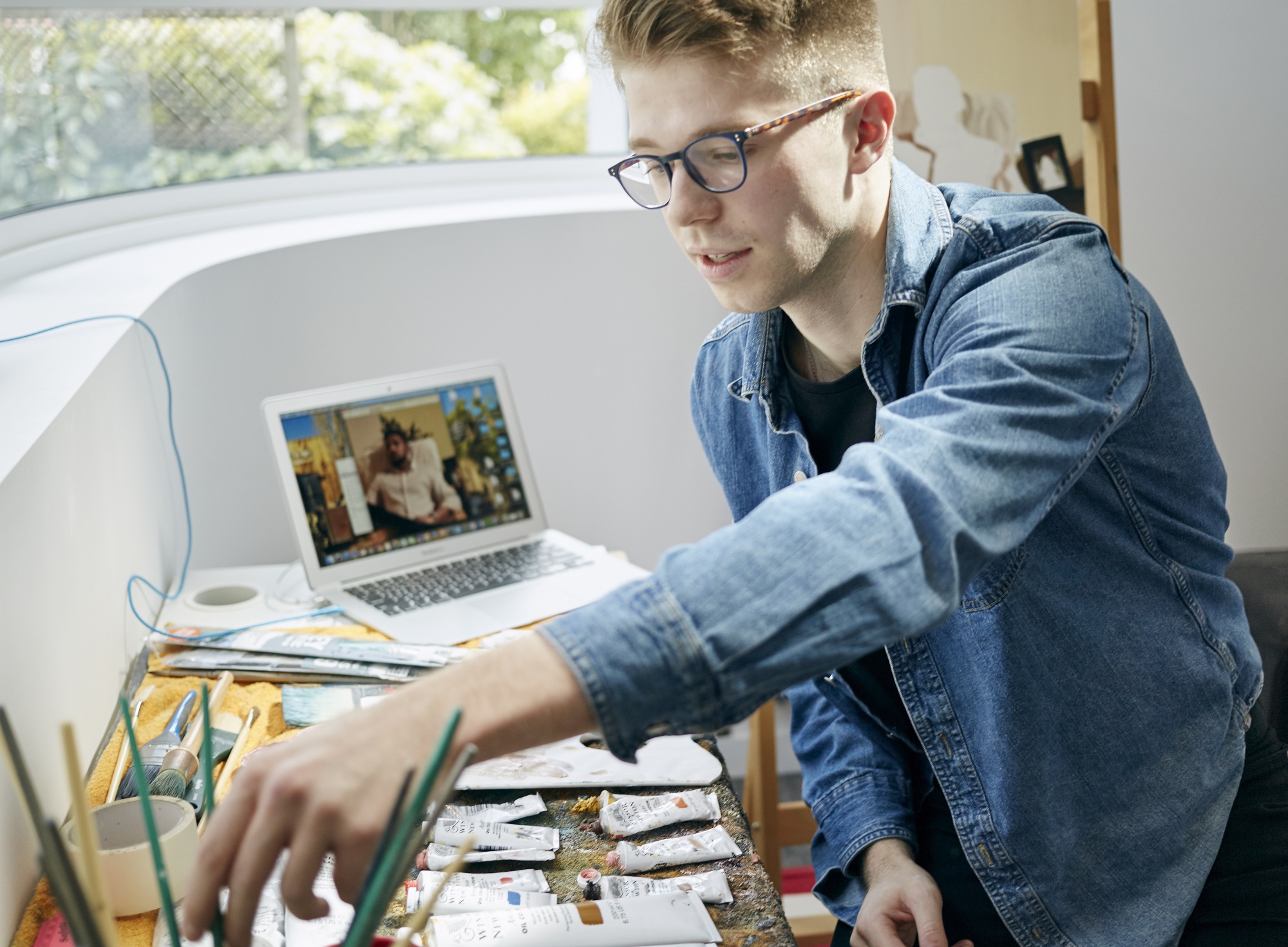 William: The best place to see my work online is via my Instagram @williambrown_studio.

There are no exhibitions currently in the pipeline. In August I had a few of my paintings, including the picture of Renda, in the ‘In The Studio’ exhibition at the Mall Galleries. The show was the culmination of a year-long project with 22 other young artists. Now that it’s over, I am taking the time to paint new work and looking ahead to whatever’s next! 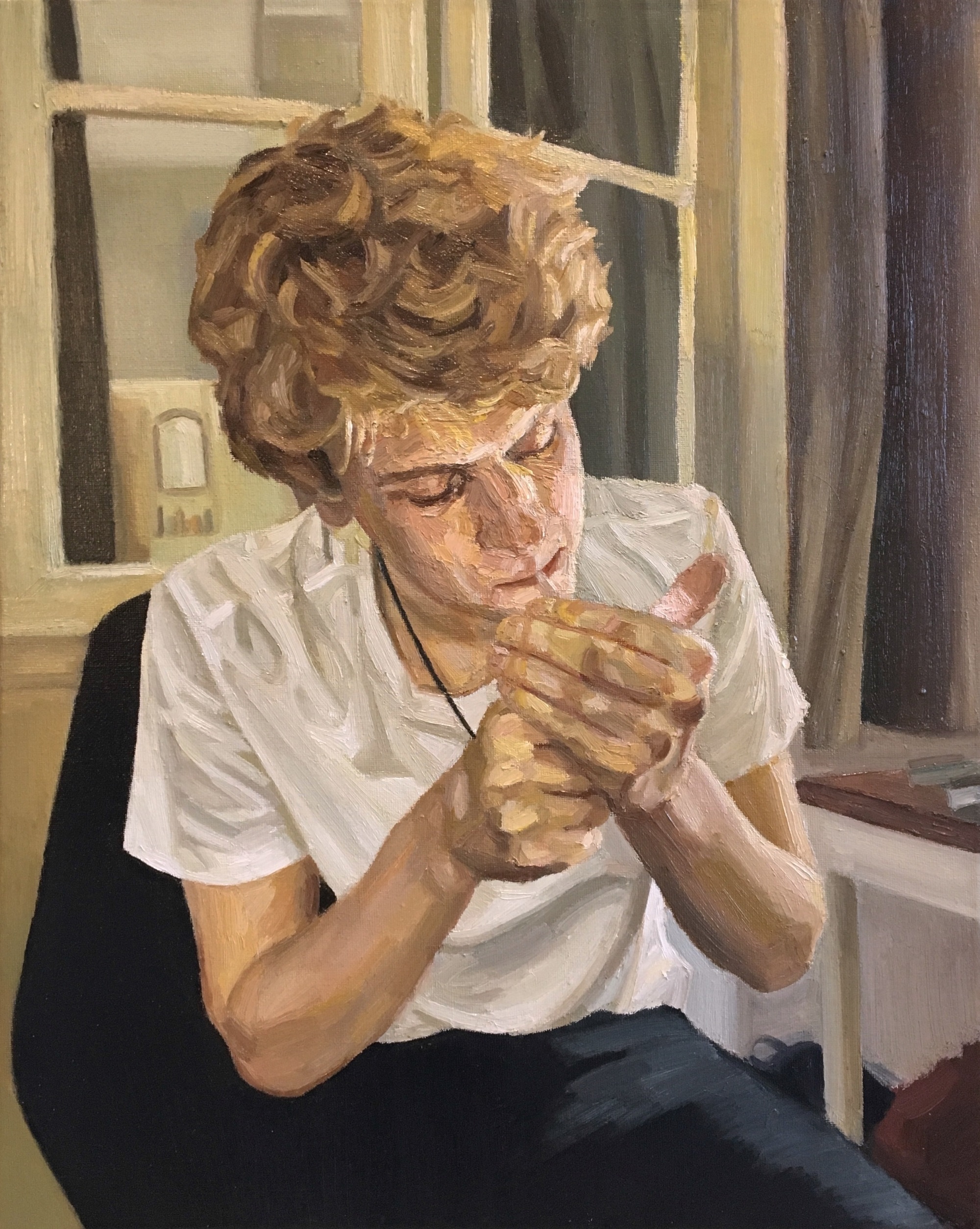