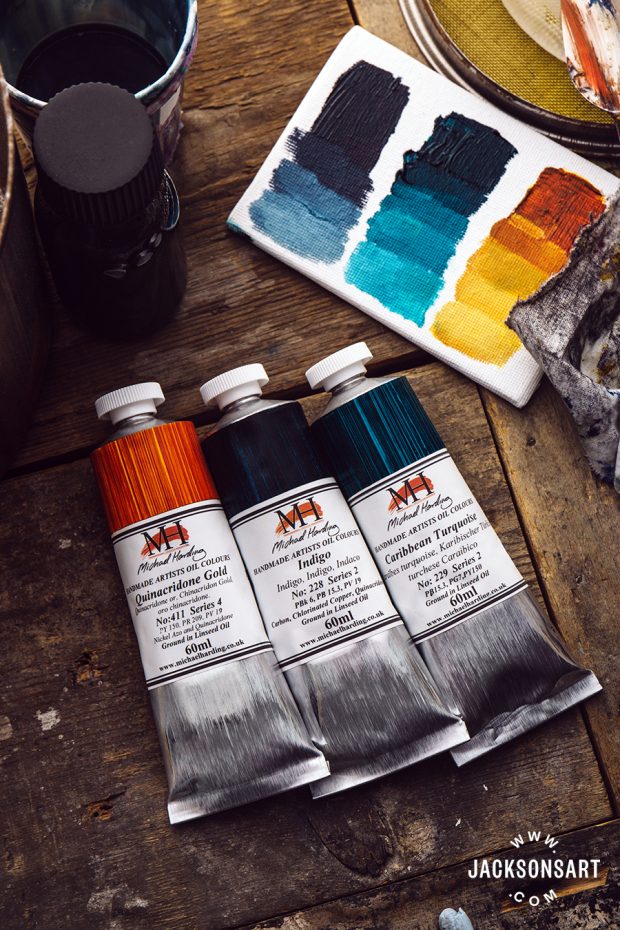 At Jackson’s, we eagerly anticipate when Michael Harding adds a new colour to his remarkable range of oil paints. When he released earlier this year three new colours, Indigo, Quinacridone Gold and Carribean Turquoise, we were excited to see what they can do, how they’re useful for artists and why they were special enough to be added. 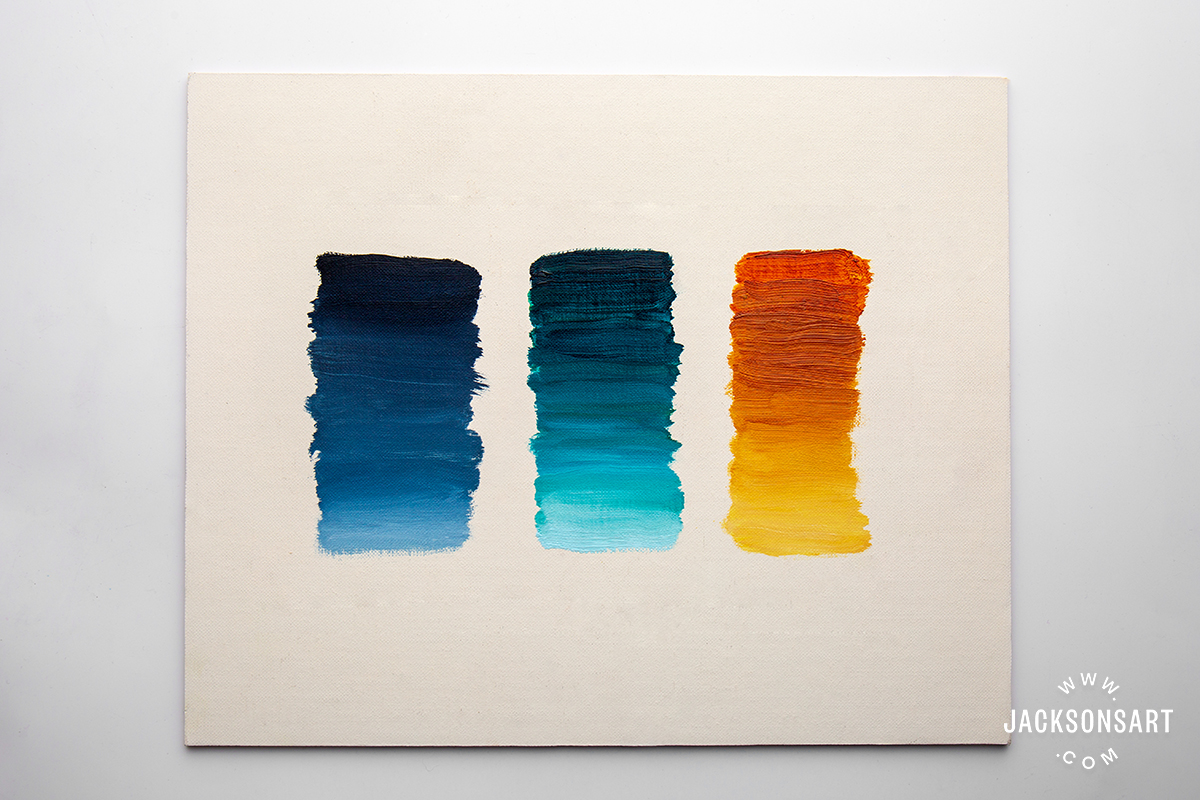 For each new Michael Harding colour, I drew out a brushstroke to test the consistency of paint straight out of the tube. I brushed over a sharpie line to show opacity using the neat paint, the paint mixed with a solvent and the paint mixed with oil. I also painted out glazes to see how the hues changed when more medium was added. I then tested each one’s tinting strength by mixing it with Titanium White. 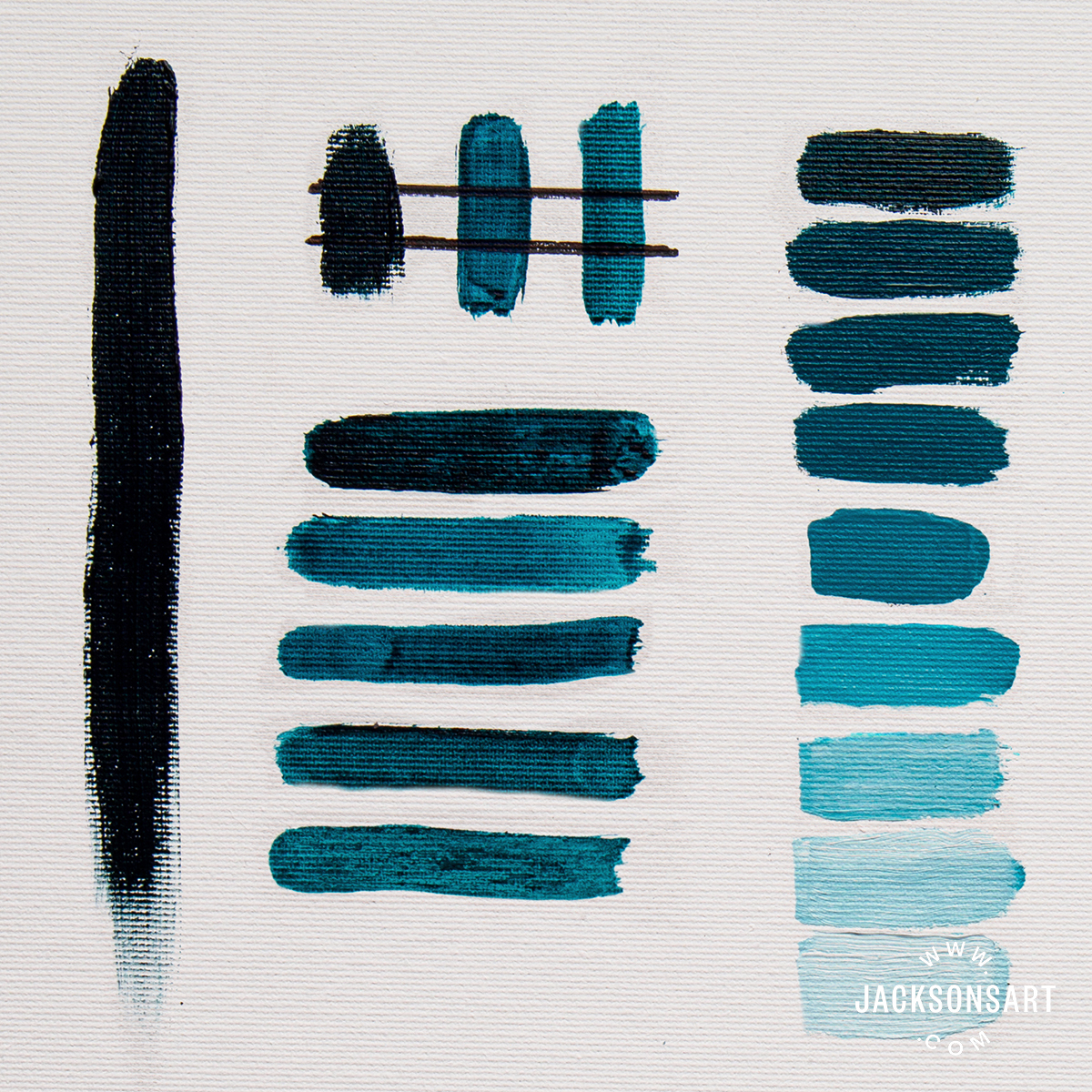 This luminous, tropical colour is a convenience mix and was designed to help you create atmosphere and mood with a couple of strokes. Useful for plein air painters, it is equally useful for contemporary abstract painters, as it is a bold colour that can be toned down or used neat.

Michael Harding developed this colour by taking inspiration from the gemstone turquoise, its history of being used in adornments by the ancient Egyptians and carved by Chinese artisans more than 3000 years ago, as well as drawing on the colour’s association with good fortune, beaches and warm oceans off tropical islands.

It’s made with a mixture of pigments. The PB 15.3, Phthalocyanine Blue BGS, I’d say is fairly strong in it and contributes to its high tinting ability. Phthalocyanine Blue is a transparent, dark-valued, strong, intense blue that is the base for many modern blue paints, the green shades of this pigment are drawn out and quite apparent in this mixture. The PG7, Phthalocyanine Green, included, is heavily staining, transparent and moderated dull but gives an appealing blue green shade to the overall mix. It is chemically and visually similar to PB 15.3 so works well with it and they both have a similar strength. The PY150, Nickel Azomethine Yellow, lightens and brightens the turquoise tones of the two Phthalocyanine pigments. It is a light valued, intense, slightly orange yellow pigment that has brighter undertones and adds to the luminosity of the Caribbean Turquoise.

Straight out the tube the paint was buttery, as is typical with Michael Harding paints, and was very smooth, drawing out well while keeping fairly pronounced brush marks. Although, not very visible in the photograph of the test even when used thickly in masstone the Caribbean Blue was still very transparent. The Phthalos undergo very little shift from mass tone to undertone which was evident with the glazing tests I did with the Caribbean Turquoise where only a very slight greener undertone came out in the stroke with the most medium (at the bottom).

In the tinting test at it’s darkest the Caribbean Turquoise looks almost dark green but as it is lightened it shifts towards a softer blue with a greenish tinge. The variety of shades produced just by mixing it with white makes this a versatile turquoise to be used by seascape and landscape painters who want to produce harmonious, different tones throughout the work. 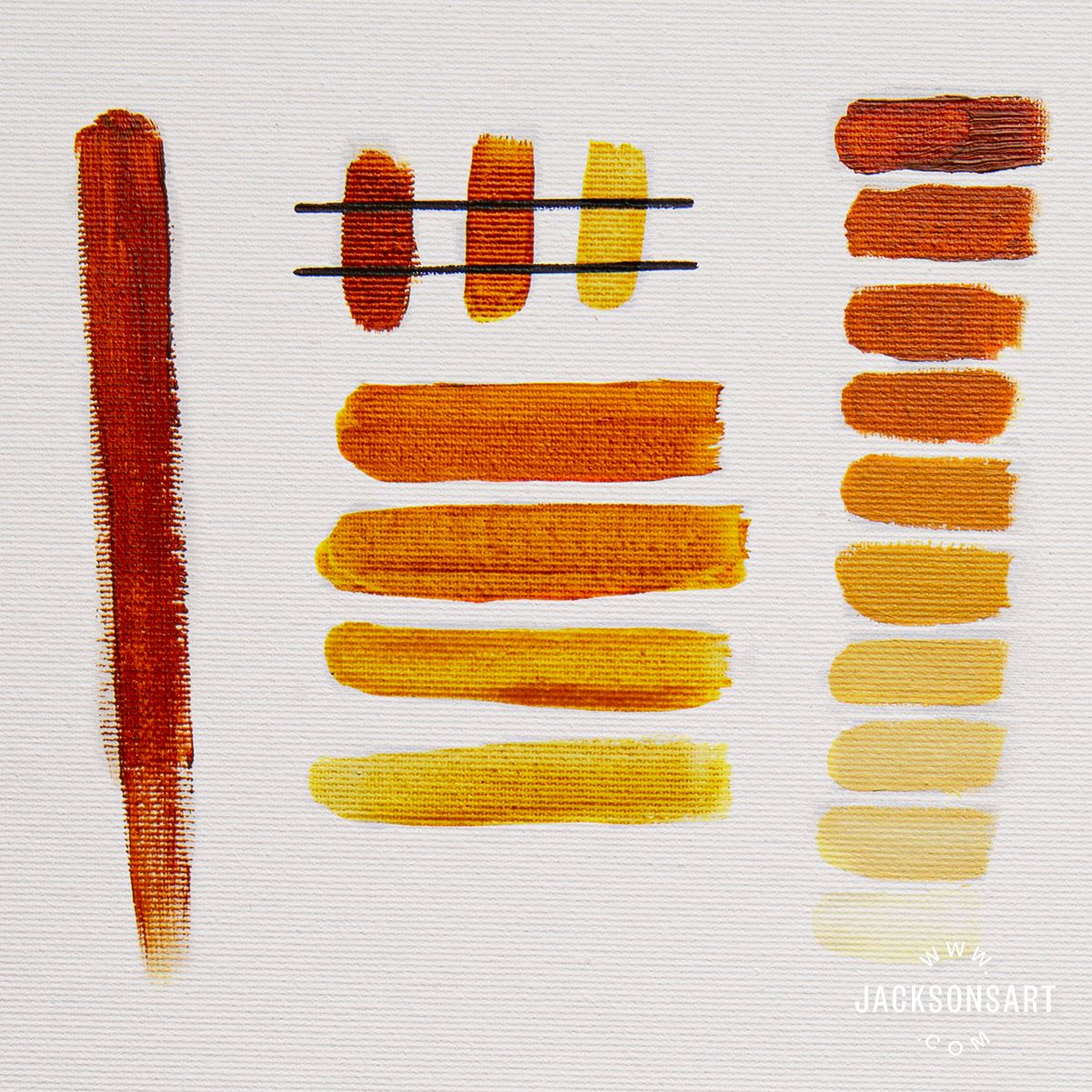 This is a rich, amber, golden yellow that is transparent and ideal for glazing or mixing to produce interesting hues. It’s shift from masstone to undertone is very pronounced with a rich very transparent orange brown in mass tone through to brighter yellow golden undertones when glazed.

Similar to Gamboge Deep or the original Quinacridone Gold pigment, it is ideal for glowing skies, sunsets or warm underpainting. It produces rich, clean, transparent sap greens when mixed with deep blues and produces great mixes for botanical work. It is useful for a palette that is reminiscent of that used by the early Flemish painters or those who seek to produce a sky in the style of Turner.

The Quinacridone Gold straight out of the tube was incredibly buttery and soft, holding brush marks much more softly. It’s highly transparent even when used in mass tone and the colour shift between a dark mass tone and the varied undertones in glazes is immediately obvious in these tests. During the tinting test, you can also see how the extent of white added dramatically changed what undertones were prominent. The middle of the scale was a remarkably dull ochre yellow, whereas the darker swatches had a much stronger orange hue and the light swatches had a warm yellow coming through. 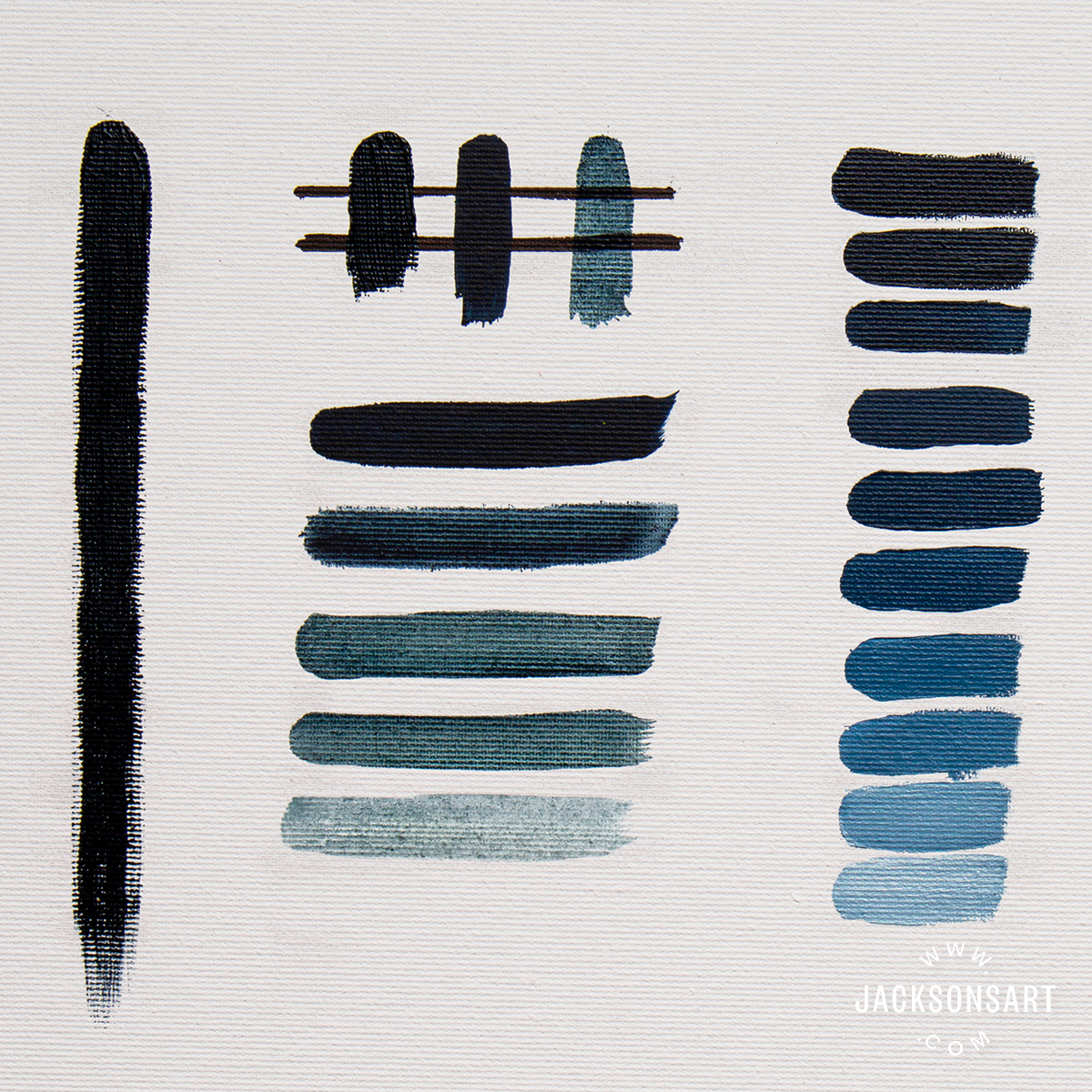 Indigo is a deep, rich, dark blue that is almost black in mass tone but can be mixed with either mediums or white to create a light nuanced sky blue. It is a transparent colour that looks inky to the eye. Artists have been looking for a lightfast alternative to traditional fugitive Indigo with increasing fervour for years. Because of this, Michael Harding has spent a lot of time sourcing and testing Indigo alternatives to find a paint that meets his high standards.

This Indigo paint has been designed with nocturne painters in mind but it will also appeal to those wanting to depict sultry skies and artists who want to add depth to shadows and greys.

It is made using a small amount of Lamp Black, PBk 6, an opaque, heavily staining black that has a very slight warmth. The inclusion of this helps create the darker tones and soften the lighter tints. The blue colour comes in the main from PB15.3 Phthalocyanine Blue BGS a dark intense blue, with a greenish shade. The Phthalocyanine Blue gives it it’s strong tinting abilities, as well as meaning it has the highest chroma when moderately mixed with medium, the slightly green undertones are visible in the slight turquoise look of the glazes. The final addition of PV19, Quinacridone Rose, a dark valued intense violet red pigment that can shift to blue in undertone, helps add further depth to the Indigo and a slight coolness to its blue hues.

The Indigo out the tube was buttery, retaining brush marks and was slightly thicker than the other two having a shorter tail off. While it is a transparent paint, when used thickly it was almost impossible to see the sharpie lines beneath the paint. Even when mixed with some medium it was still fairly hard to see through. The glazes brought out a deep nocturnal blue that had a slight turquoise tinge. Used in a very light glaze it was pleasingly moody. In tints, it was very strong with the Phthalocyanine Blue coming through to produce a strong but softened light blue.

You can view our whole range of Michael Harding colours here. 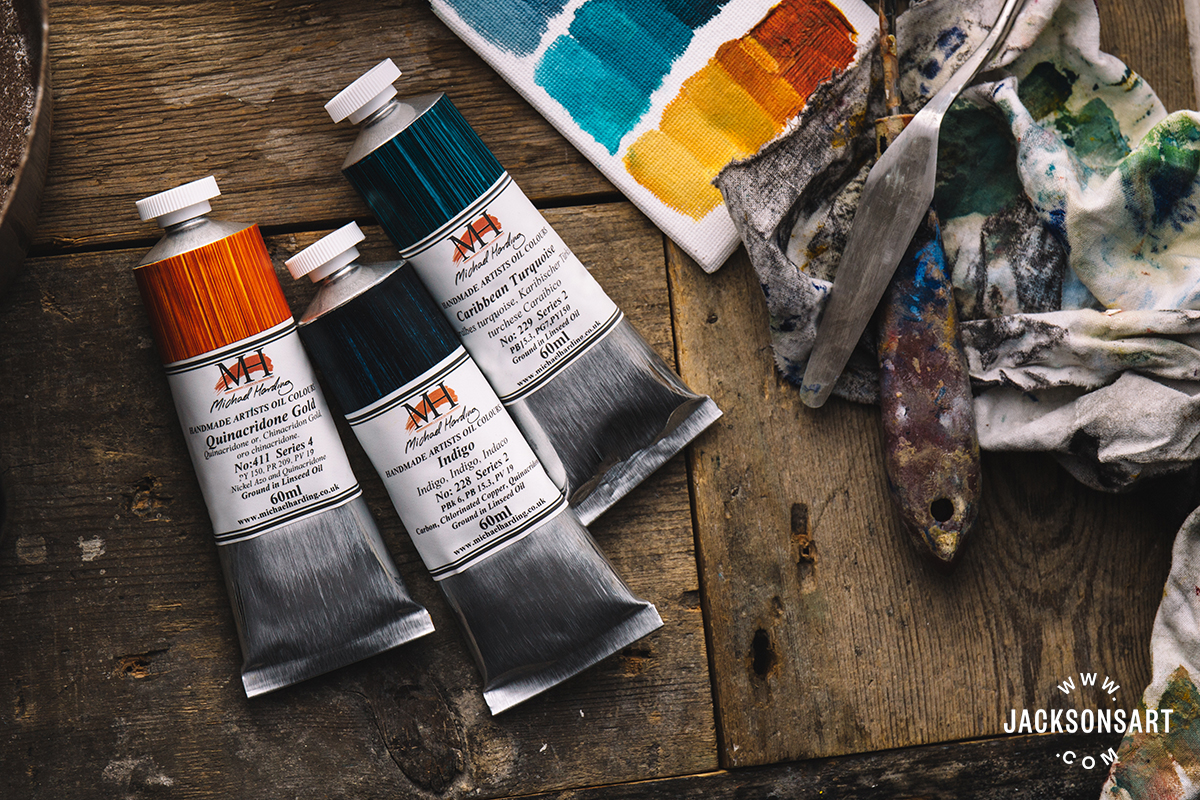