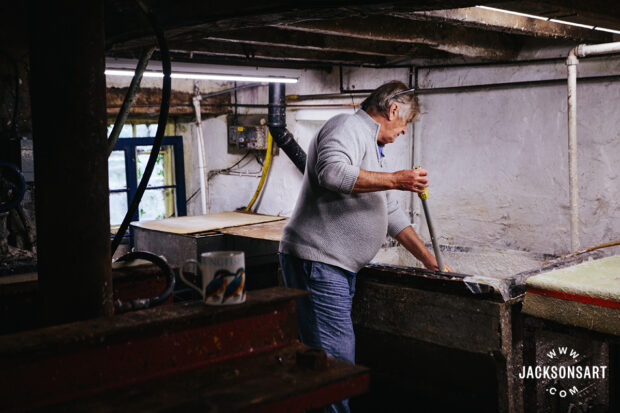 On Location at the Two Rivers Paper Mill

Two Rivers specialise in the centuries-old tradition of making handmade rag paper. We visited their water-powered mill, located among the rolling hills of West Somerset, to see how they make their paper, and find out what sets handmade rag paper apart from machine-made papers.

The Two Rivers Paper Company have been making paper at the mill since 1988, though the mill itself is over 400 years old. The watermill powers a Hollander beater, a machine used to break down cotton and linen rag. 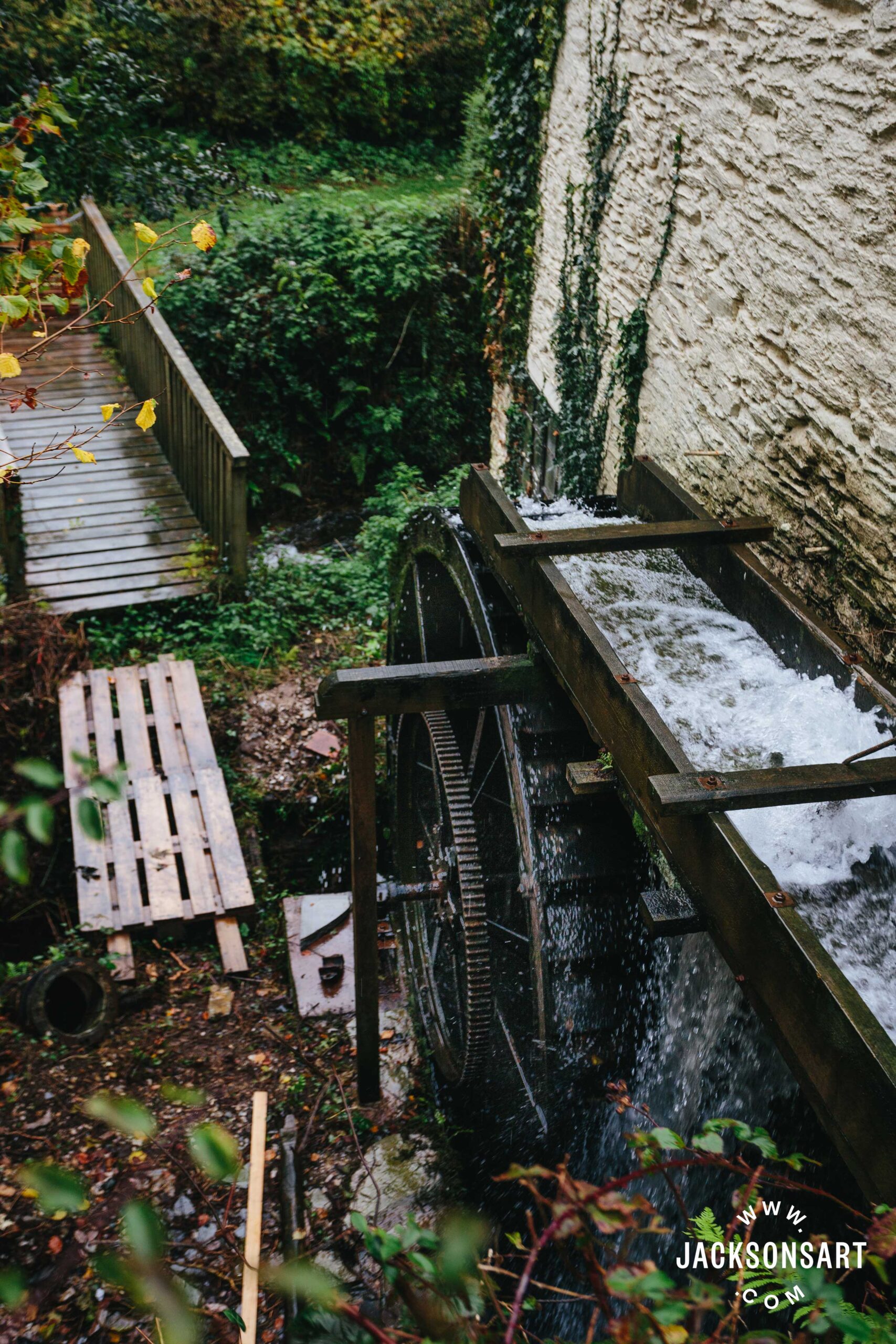 The watermill turning at Two Rivers. It is the only mill in the UK to use hydro-power to process textile rag for papermaking.

What is Rag Paper?

Among the papers made at the mill is Jackson’s Two Rivers, a 100% cotton and linen rag watercolour paper made exclusively for Jackson’s. Most 100% cotton watercolour papers are made using cotton linters, the fluffy fibres that are left on the cotton plant after the longer staple fibres have been removed for the production of textiles. Jackson’s Two Rivers paper contains cotton and linen rag, which sets it apart from most watercolour papers and creates its uniquely robust characteristics. Cotton rag is recycled cotton textiles, which are made using the longest fibres from the cotton plant. Linen rag has long, thin fibres which interlock with the cotton fibres, increasing the paper’s strength. This makes the paper particularly robust and resistant to repeated reworking of paint on the surface.

The rag is fed by hand into the Hollander beater which, diluted with water from the river, breaks down the weave of the textile. This process makes the fibres more flexible, increasing their surface area, and ultimately increasing the internal strength of the paper. 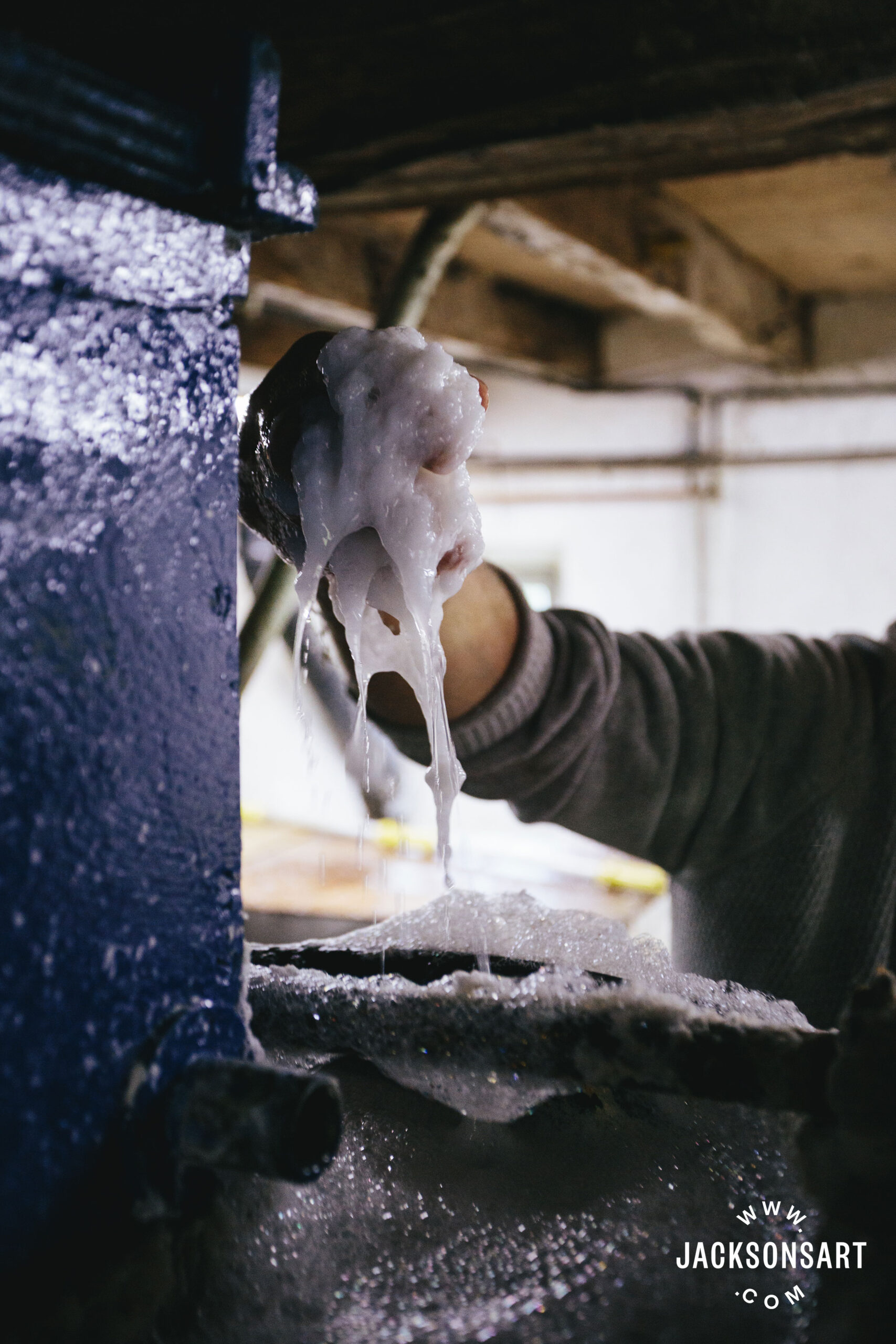 The Hollander beater breaking down cotton and linen rag, separating the long fibres.

A handheld paper mould is made of two separate parts – the mould and the deckle. The mould is covered in a metal mesh (at Two Rivers they use a bronze mesh, which is flexible and non-tarnishing), while the deckle is a removable wooden frame which sits on top of the mould and creates the edge of the paper.

A deckle edge is an irregular edge which occurs when the paper stock goes between the mould and the deckle. Because handmade sheets are individually formed, they are the only papers that have four genuine deckle edges, one of the most beautiful characteristics of handmade paper.

Each sheet is formed by dipping the mould and deckle into a vat of the paper stock. The stock is mostly water and contains around 1.5% cotton and linen fibre, as well as calcium carbonate and AKD (alkyl ketene dimer), a synthetic internal sizing agent. As water drains through the mesh it leaves a mat of fibres on the face of the mould. 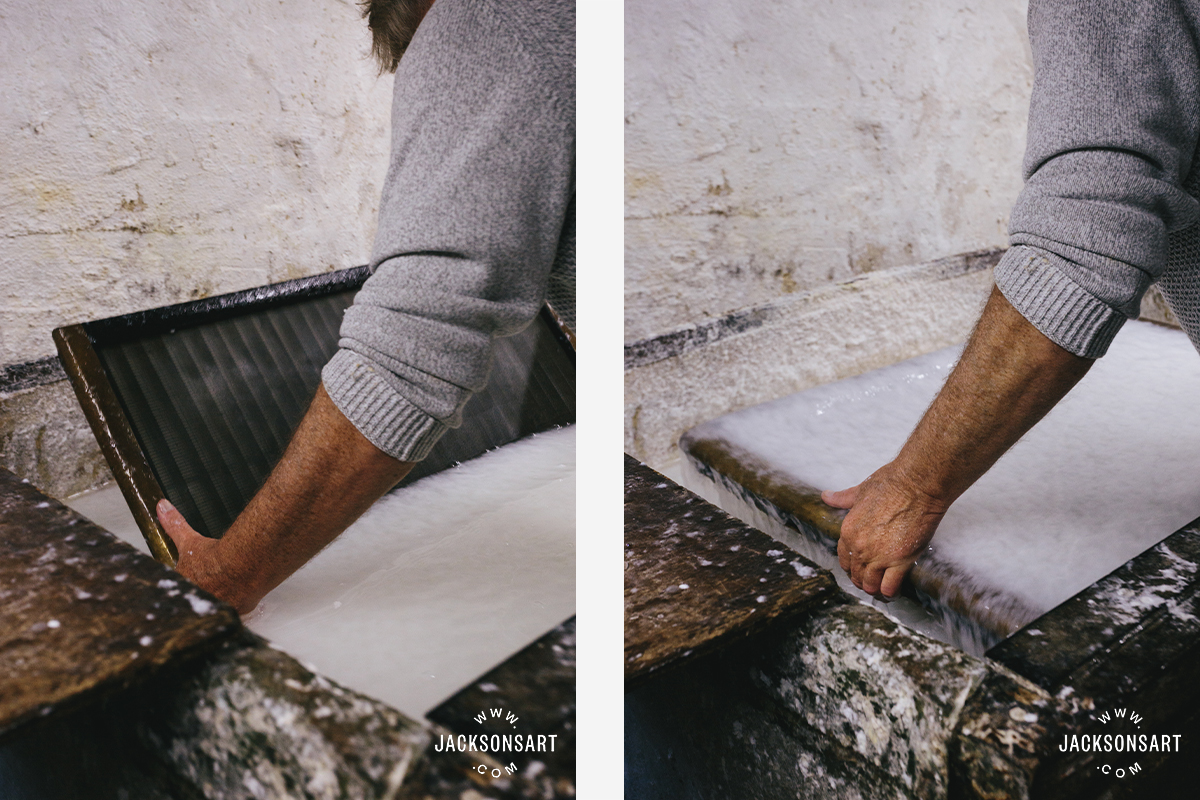 Jim forming a sheet with a mould and deckle.

The sheet, while still in the mould and deckle, is lifted onto a vacuum bed which removes some of the excess water. 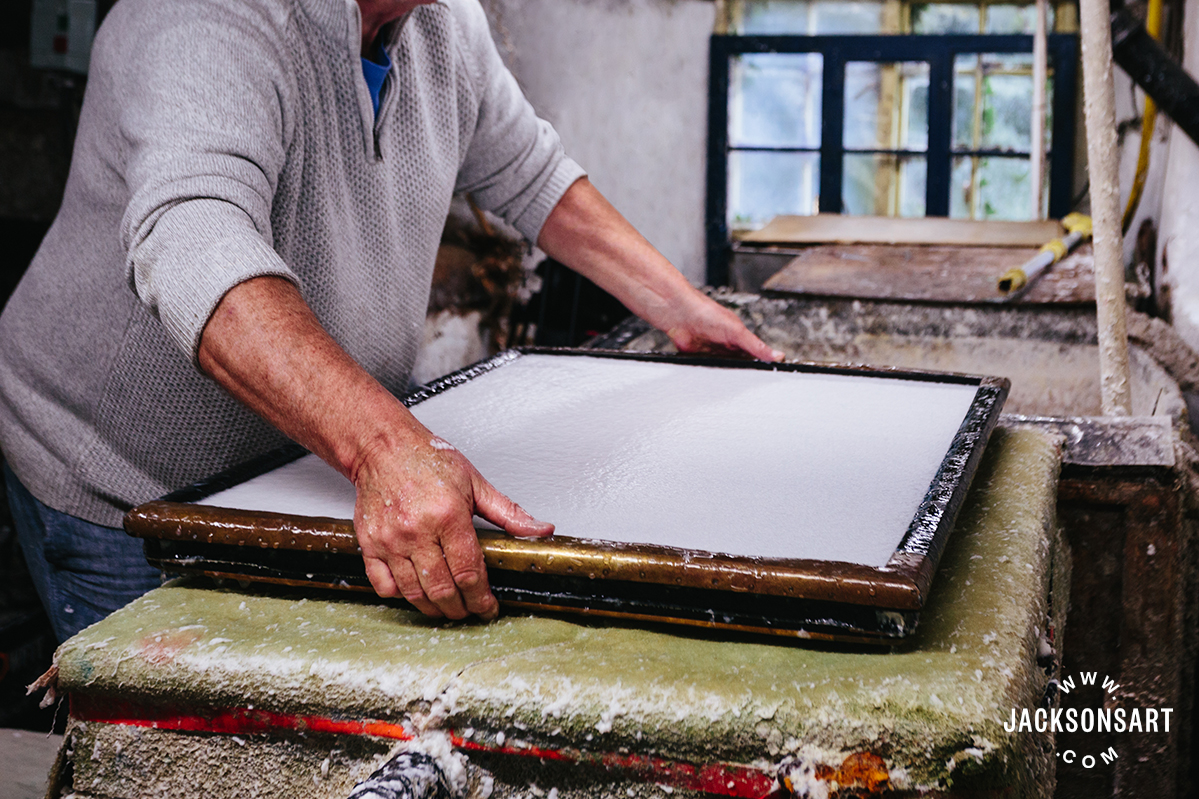 The sheets are then couched between wet woollen felts and pressed with a hydraulic press to remove more water. 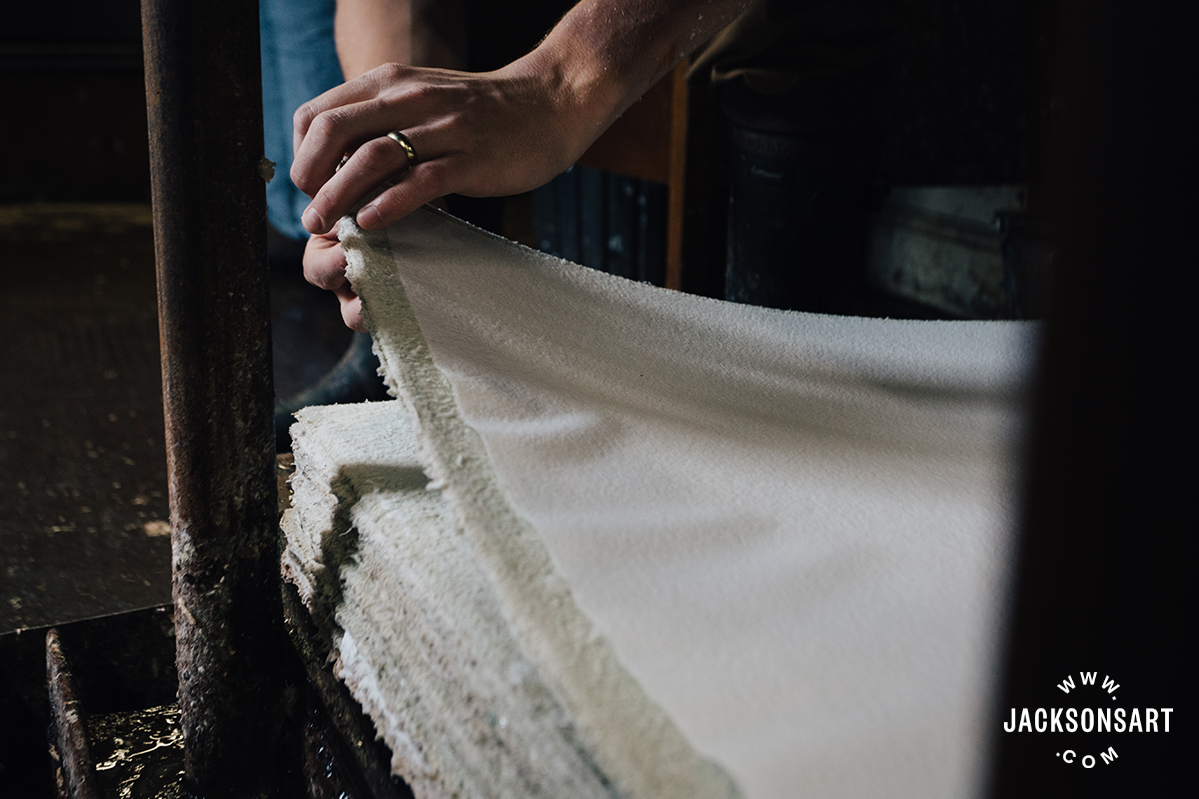 After couching and pressing, the sheets still contain around 50% water and they are hung to dry before they are externally sized.

Size is a key ingredient in the production of artist paper, and watercolour paper is no exception. Paper is a naturally highly absorbent material, and the addition of a sizing agent makes the paper partially water-resistant. As well as containing an internal synthetic size, Jackson’s Two Rivers watercolour paper is sized externally by pulling sheets by hand through a tub of hot gelatine. This allows wet paint to be moved around on the surface and remain vibrant and crisp when dry. It makes Jackson’s Two Rivers ideal for lifting techniques because the colour does not saturate the fibres of the paper and is more easily removed. External sizing also increases the surface strength of the paper, allowing it to withstand more vigorous painting techniques, like scrubbing and reworking of the paint. 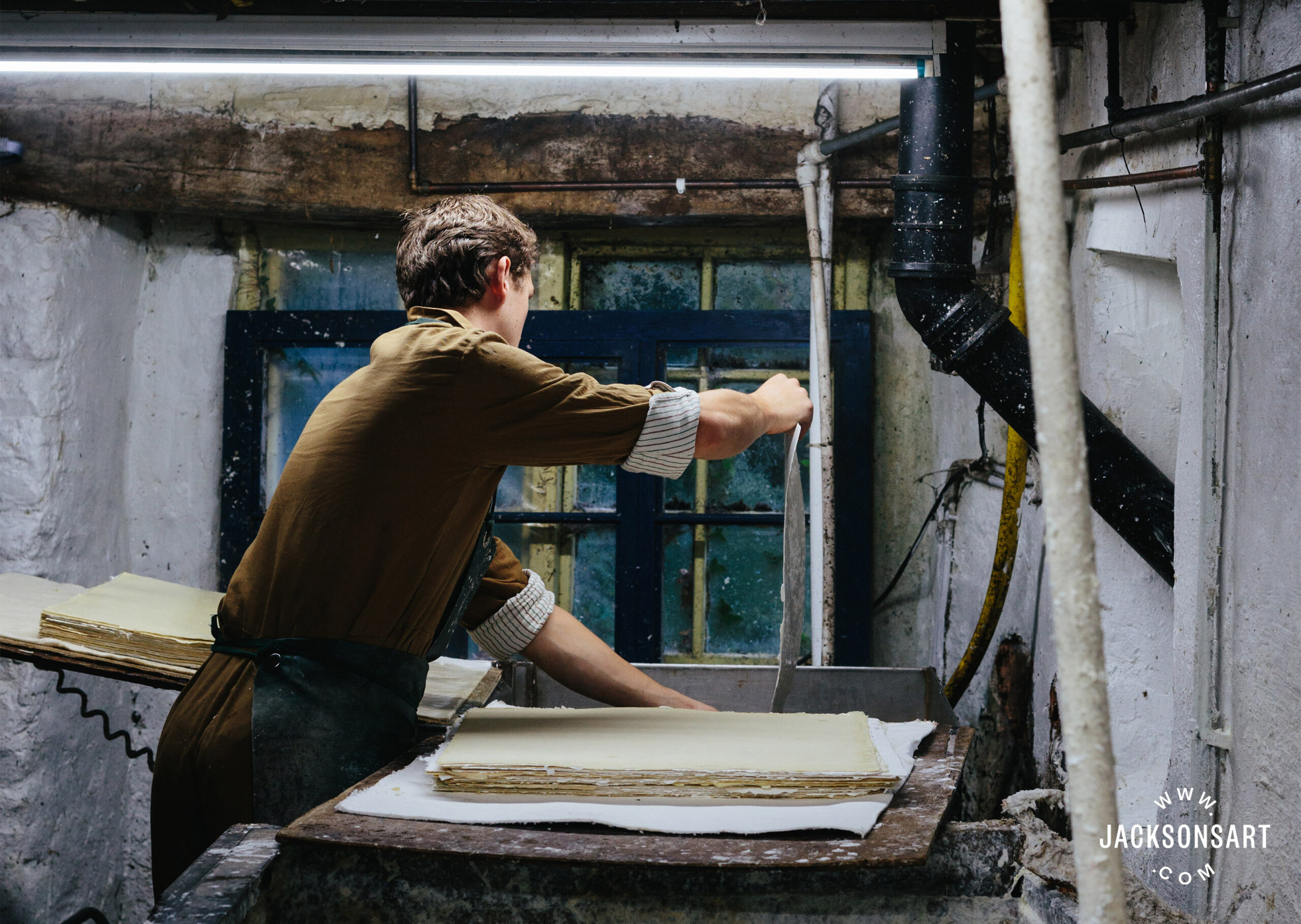 After tub sizing, the paper is pressed again with the hydraulic press, before being taken upstairs to the drying loft to air dry. 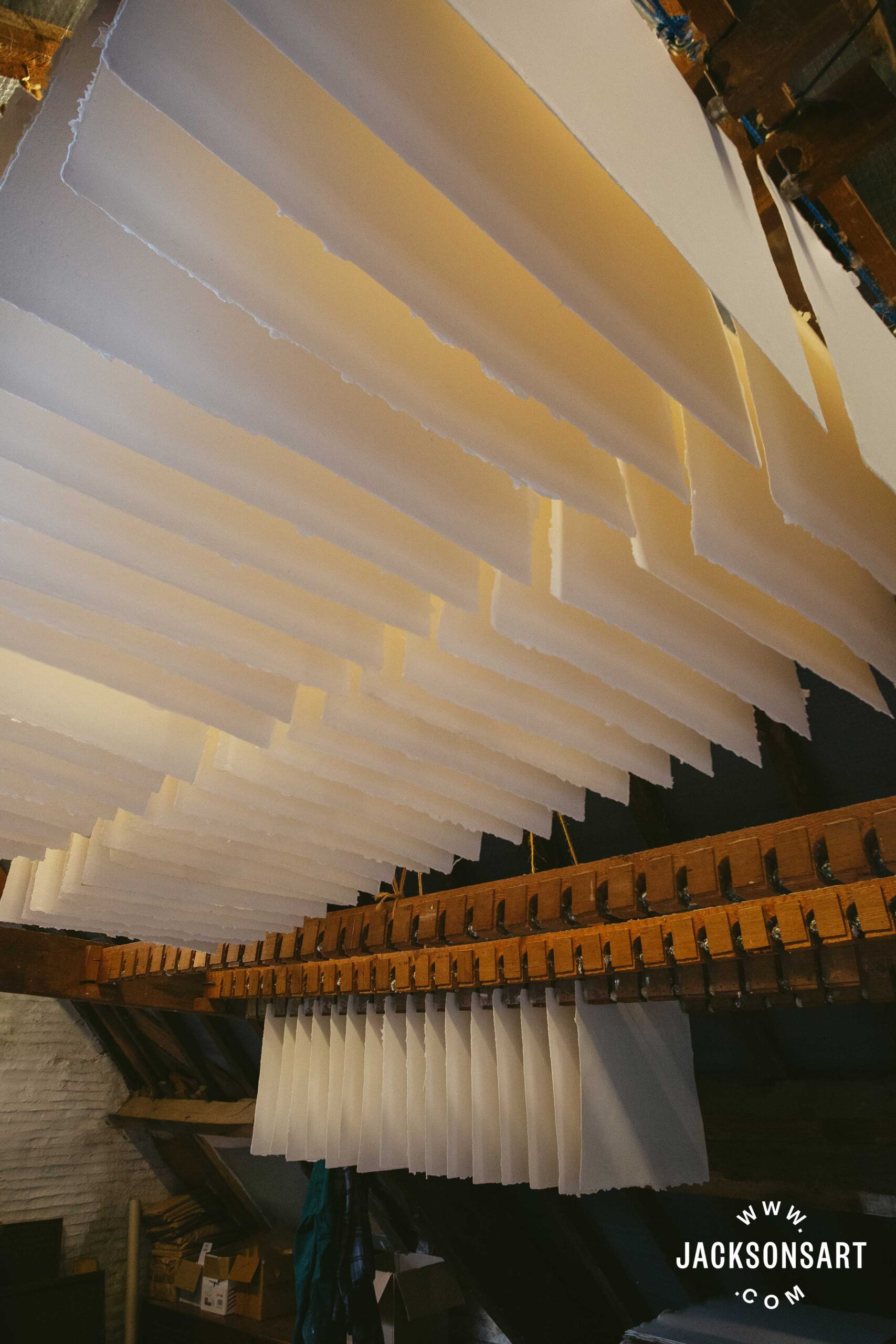 Jackson’s Two Rivers paper has a uniquely random surface texture which is rougher than most cold-pressed watercolour papers. It is excellent for granulating watercolours and expressive painting. However, it is not only a watercolour paper; It can provide a characterful support for many different kinds of media including acrylic paint, graphite, charcoal, pastel, and -when primed- oil paint.

Watch our On Location film to see paper being made at the Two Rivers mill:

You can find sheets of Jackson’s Two Rivers paper on our website here . We also offer a sample pack.

Many thanks to Jim and the team at Two Rivers for helping us with our Paper Guide.

More in our On Location Series: