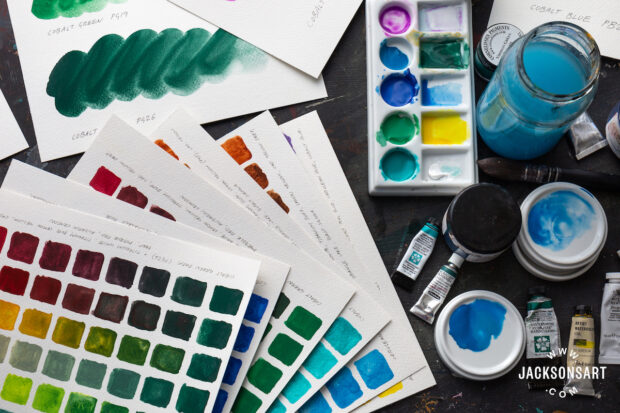 Pigment Stories: Cobalt Pigments and the Spectrum of Colour they Create

In our ongoing pigment series, we have been taking a look at the stories behind artist pigments, their histories, and their characteristics. In this article, we explore Cobalt pigments.

Cobalt is a metallic element that is mined from the earth’s crust. 16th Century German miners called it kobald, meaning ‘goblin’, after the mine-dwelling creatures who were believed to be responsible for rockfalls, rockslides, and other perilous conditions that the miners worked under. Kobalds were thought to trick them with cobalt ore deposits that could be mistaken for silver, and which released poisonous fumes when smelted. Cobalt-containing minerals have been used to colour glass and ceramics for more than 2,500 years. In 15th and 17th Centuries, Smalt was a widely blue pigment that consisted of ground cobalt-coloured glass, but it wasn’t until the 18th Century that the Cobalt pigments we use today were synthesised. 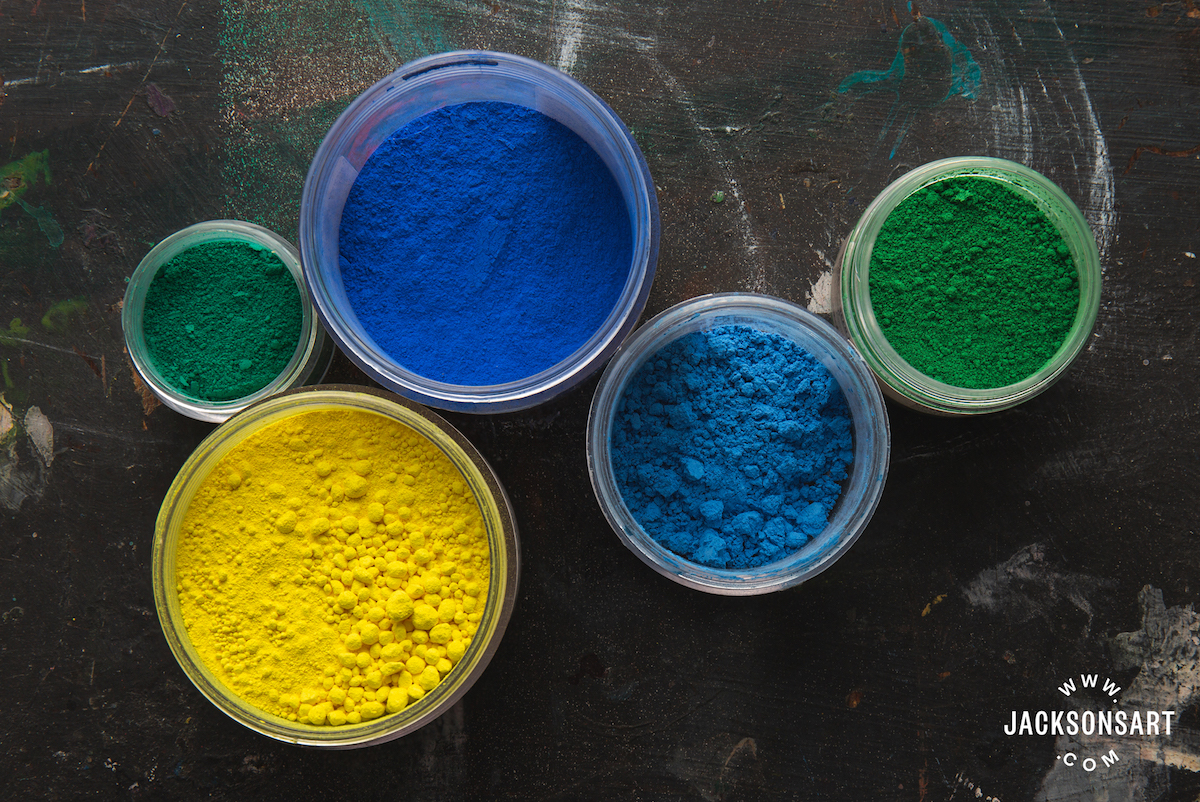 The different Cobalt pigments are produced by calcining cobalt oxide with other metals, including aluminium, phosphorus, zinc, tin, and potassium. In this article, I’ve used watercolour to explore these pigments, but the same qualities- like opacity, tinting strength, and mixing possibilities- apply in oil and acrylic paints as well. 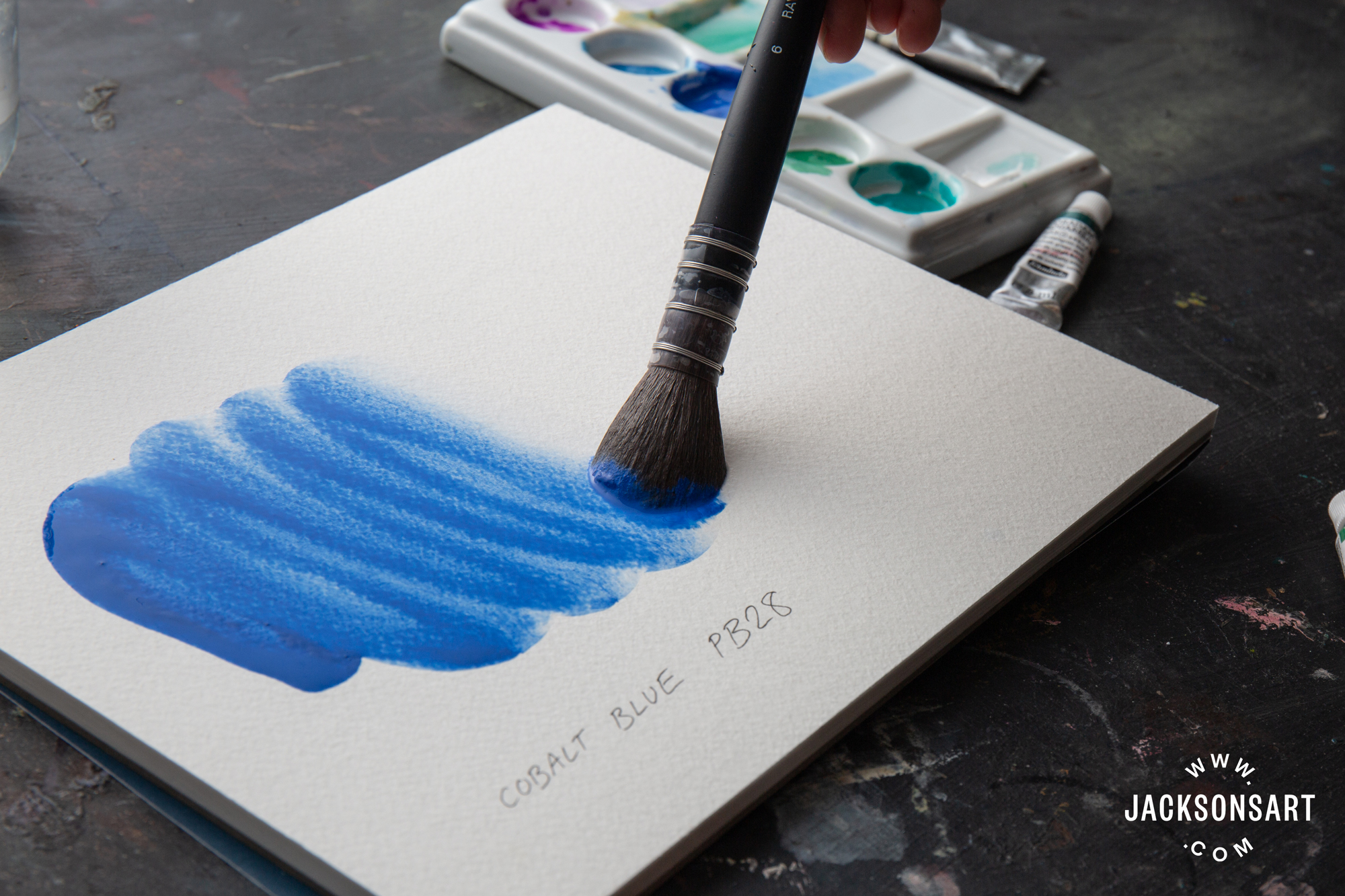 The pigment we know today as Cobalt Blue (cobalt aluminium oxide) was synthesised in 1802 by Louis Jacques Thénard, who described it as ‘a blue colour as beautiful as Ultramarine’ (referring to the historical Ultramarine pigment, made with the mineral lapis lazuli, which was highly prized at the time). However, its popularity was relatively short-lived because of the discovery of synthetic Ultramarine Blue (PB29) in 1826. Synthetic Ultramarine Blue was chemically identical to the historical mineral Ultramarine pigment, as well as being much cheaper to buy and higher in tinting strength than Cobalt Blue.

Cobalt Blue is opaque and velvety, unlike the transparent, jewel-like quality of Ultramarine Blue. However they make similar mixtures, including deep purples when mixed with pink-toned reds, and deep browns with Burnt Sienna. 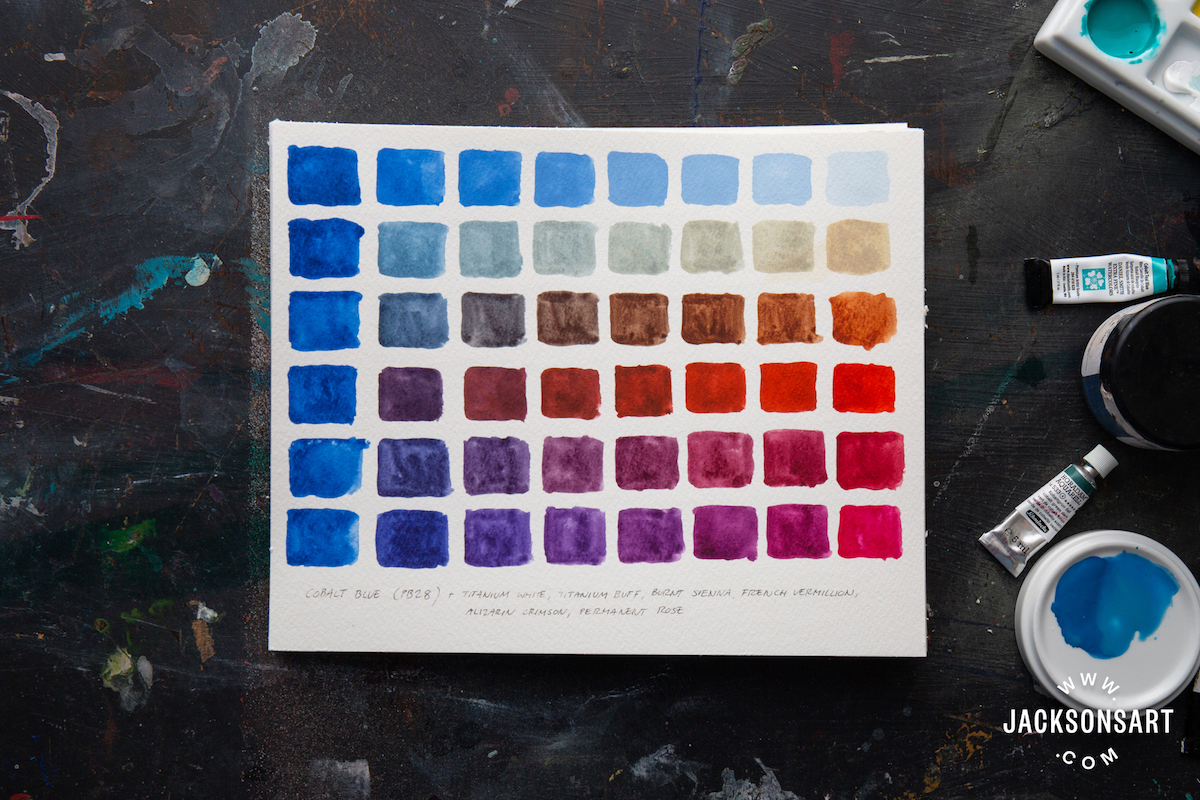 There are two different varieties of Cerulean Blue – PB35 (cobalt tin oxide), and PB36 (cobalt, chromium, and aluminum oxide). PB35 was introduced as an artist pigment in the 1860s and is considered to be the ‘original’ Cerulean Blue. PB36 is less expensive, because of its lower cobalt content, and is generally a little more green in hue and higher in tinting strength. Both are opaque to semi-transparent, and highly granulating in watercolour. 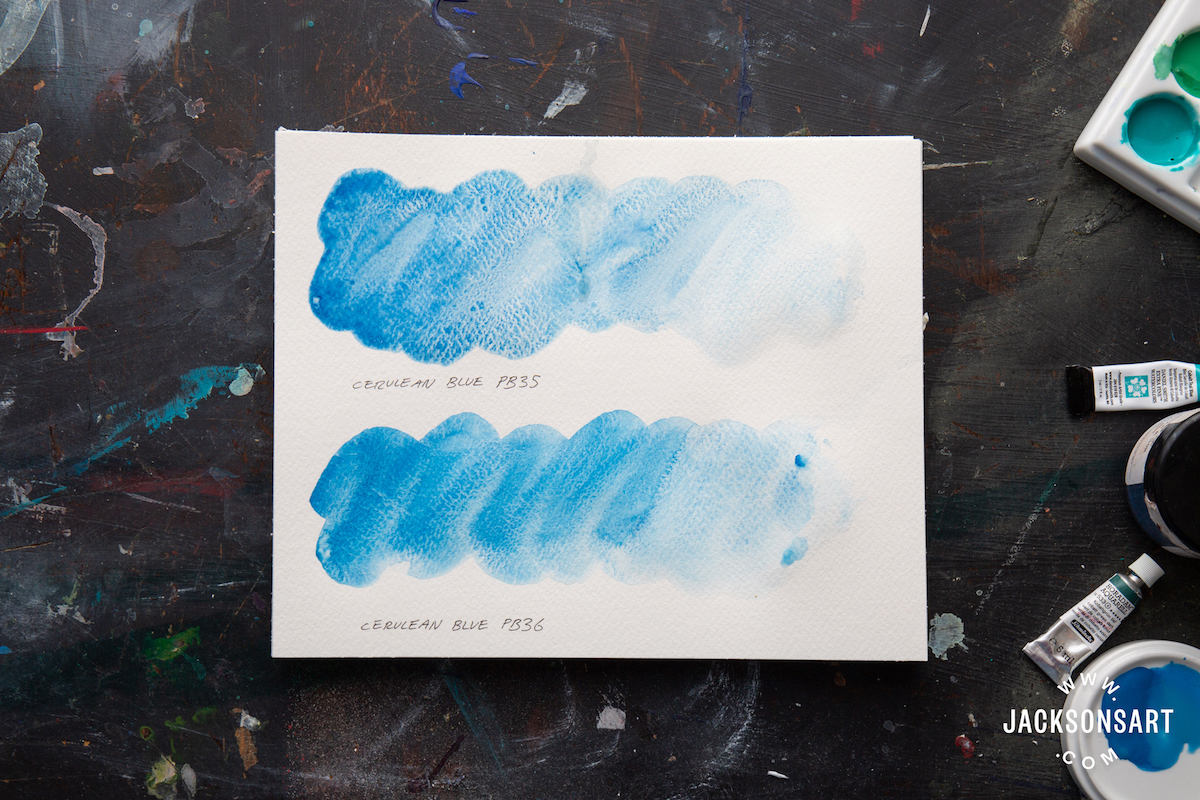 Cerulean has a similar greenish undertone to Phthalo Blue, but doesn’t have the same depth of colour or high tinting power. Cerulean Blue’s modest tinting strength makes it gentle, yet versatile, in mixtures. It is a popular colour in landscape palettes and makes a beautiful sky when used alone in a wash. 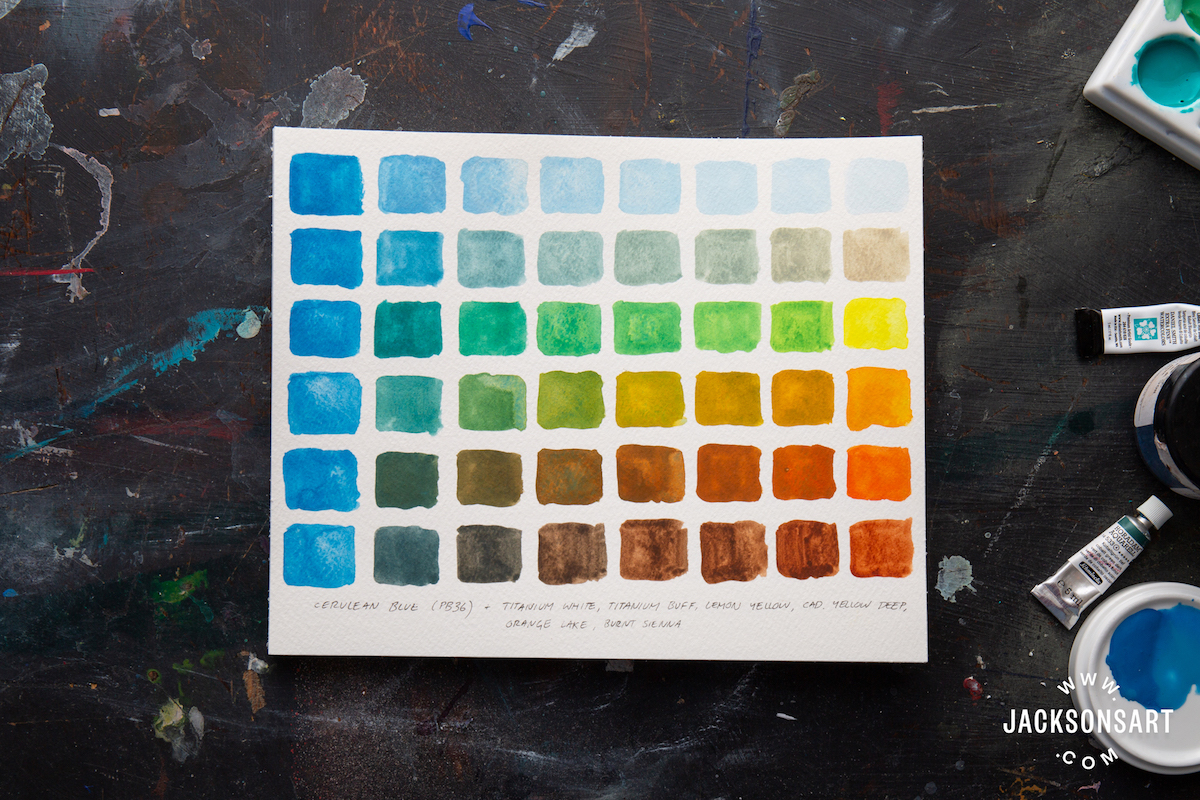 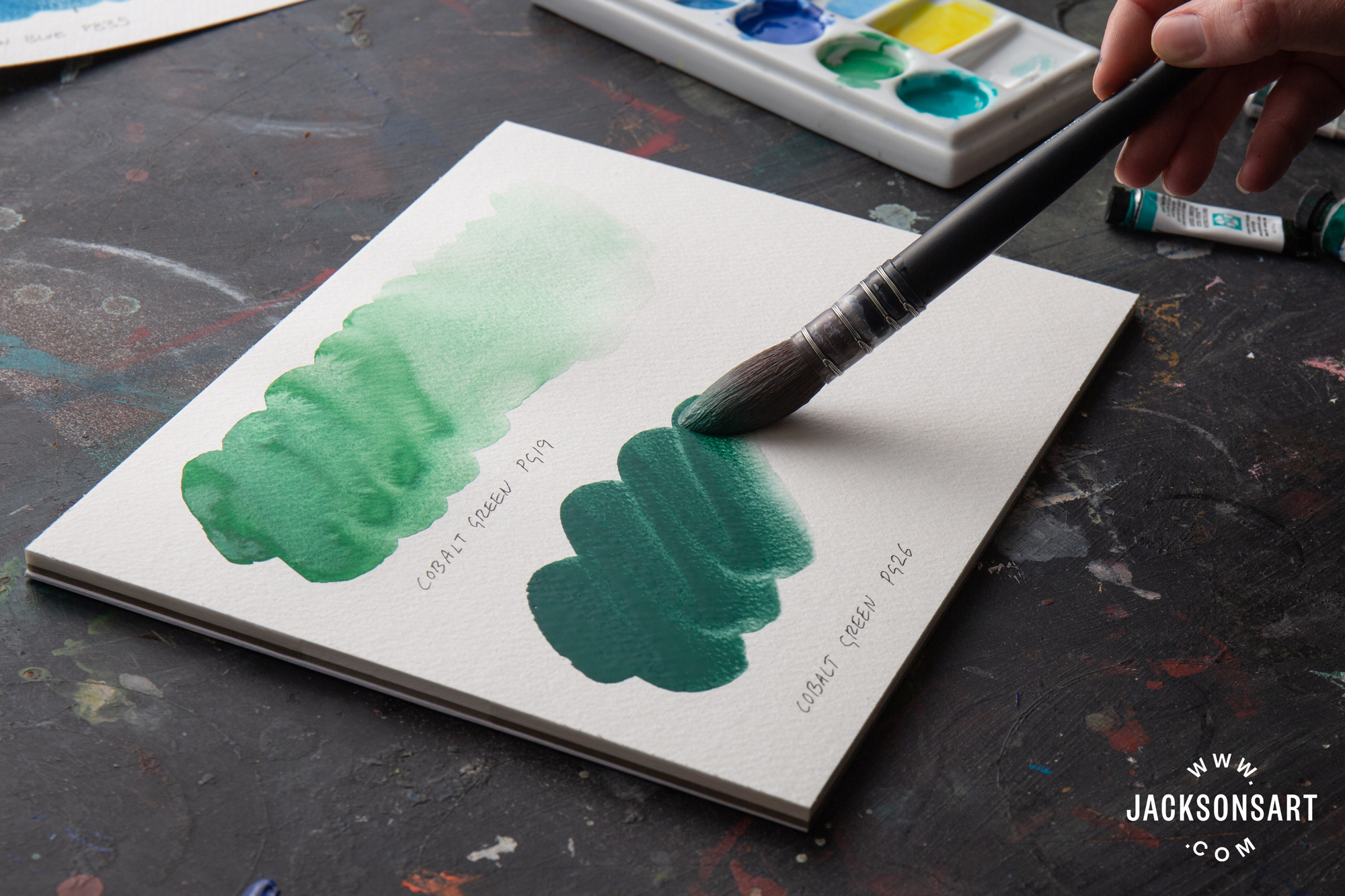 PG19 (cobalt zinc oxide) was discovered in 1780 by Swedish chemist Sven Rinman and as a result, it is sometimes known as Rinman’s Green. It can range from a blue-toned, almost turquoise green to a yellow-green. The more zinc oxide that is present in the formulation, the paler the pigment. Schmincke’s Cobalt Green Pure is a mid-green that can be adjusted with Lemon Yellow to make bright, acidic greens, or with an orange-yellow, like Cadmium Yellow Deep, to make more muted greens. 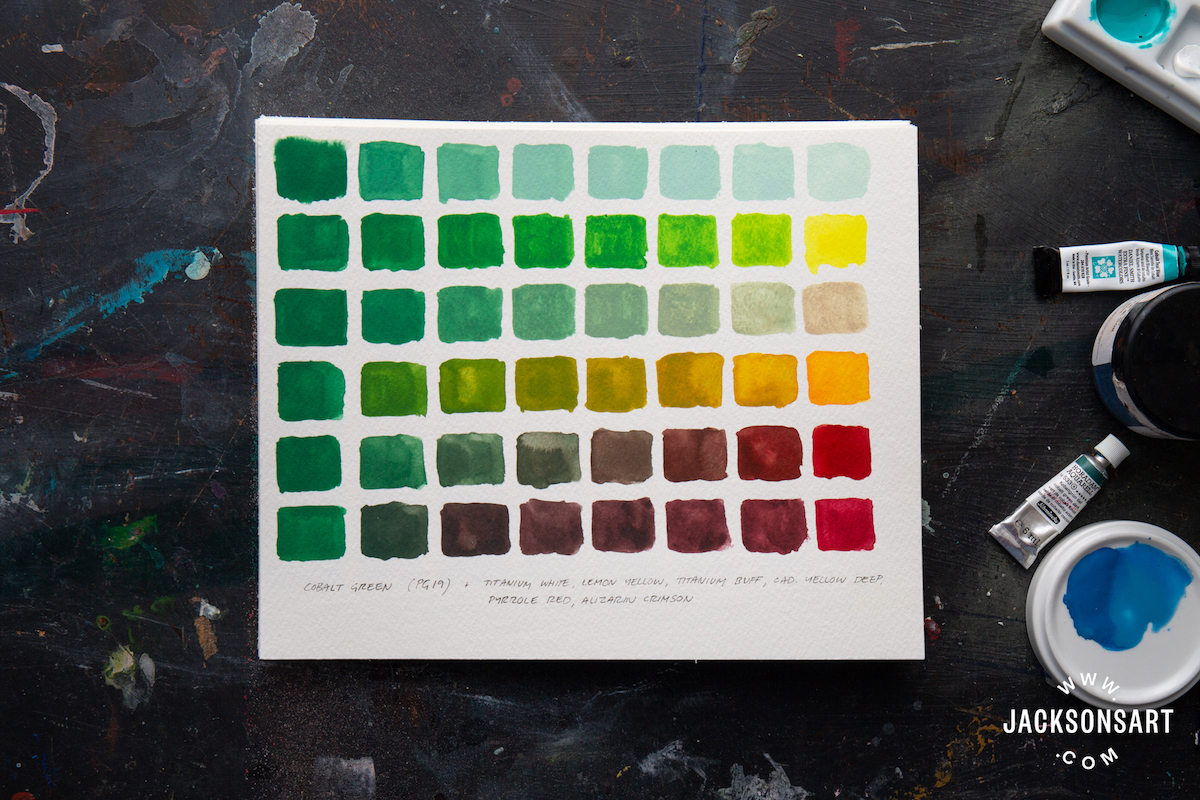 PG26 (cobalt chrome oxide) is the deepest variety of Cobalt Green, and it can range from turquoise blue to dark forest greens, like the Schmincke Cobalt Green Dark below which makes some inky blacks when mixed with Alizarin Crimson, and well as a rich variety of greens which could be useful in landscape painting. 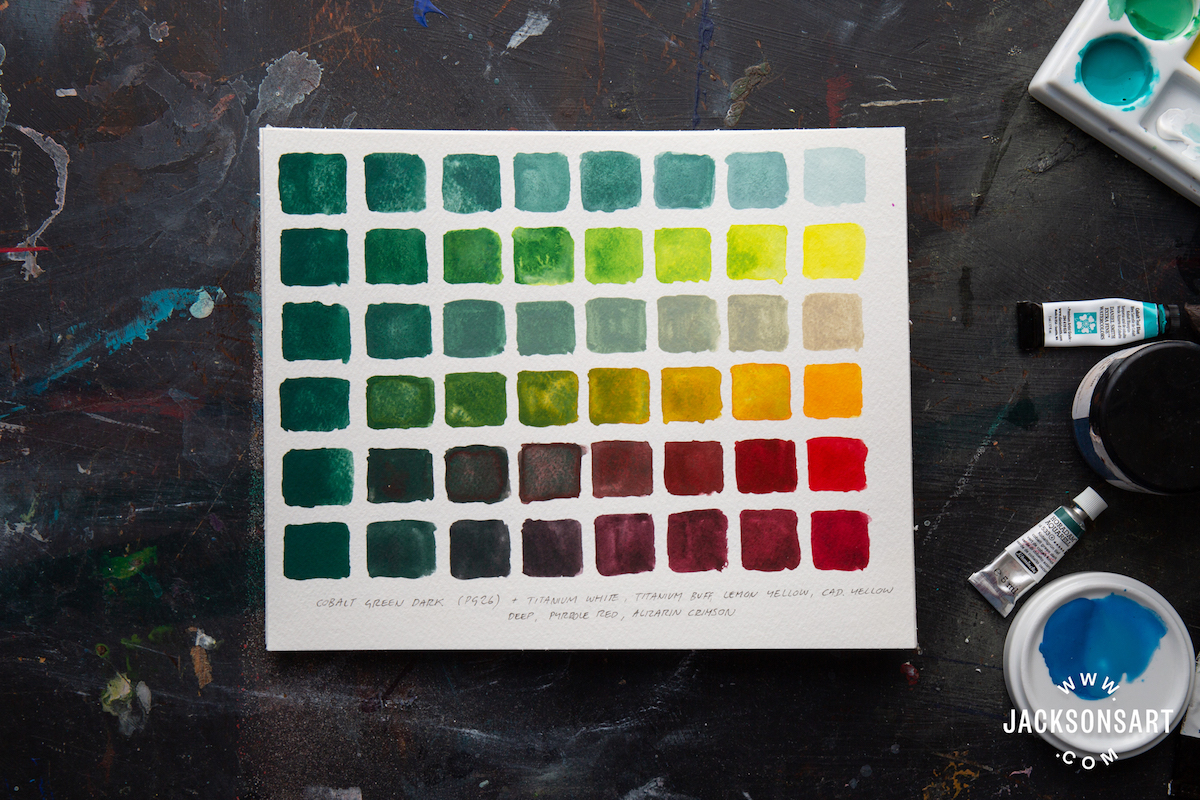 Despite being categorised as a green pigment, PG50 (cobalt titanium oxide) varies from a bright teal blue, to a yellowish-green. Schmincke Horadam’s Cobalt Turquoise hovers on the edge of blue and green. 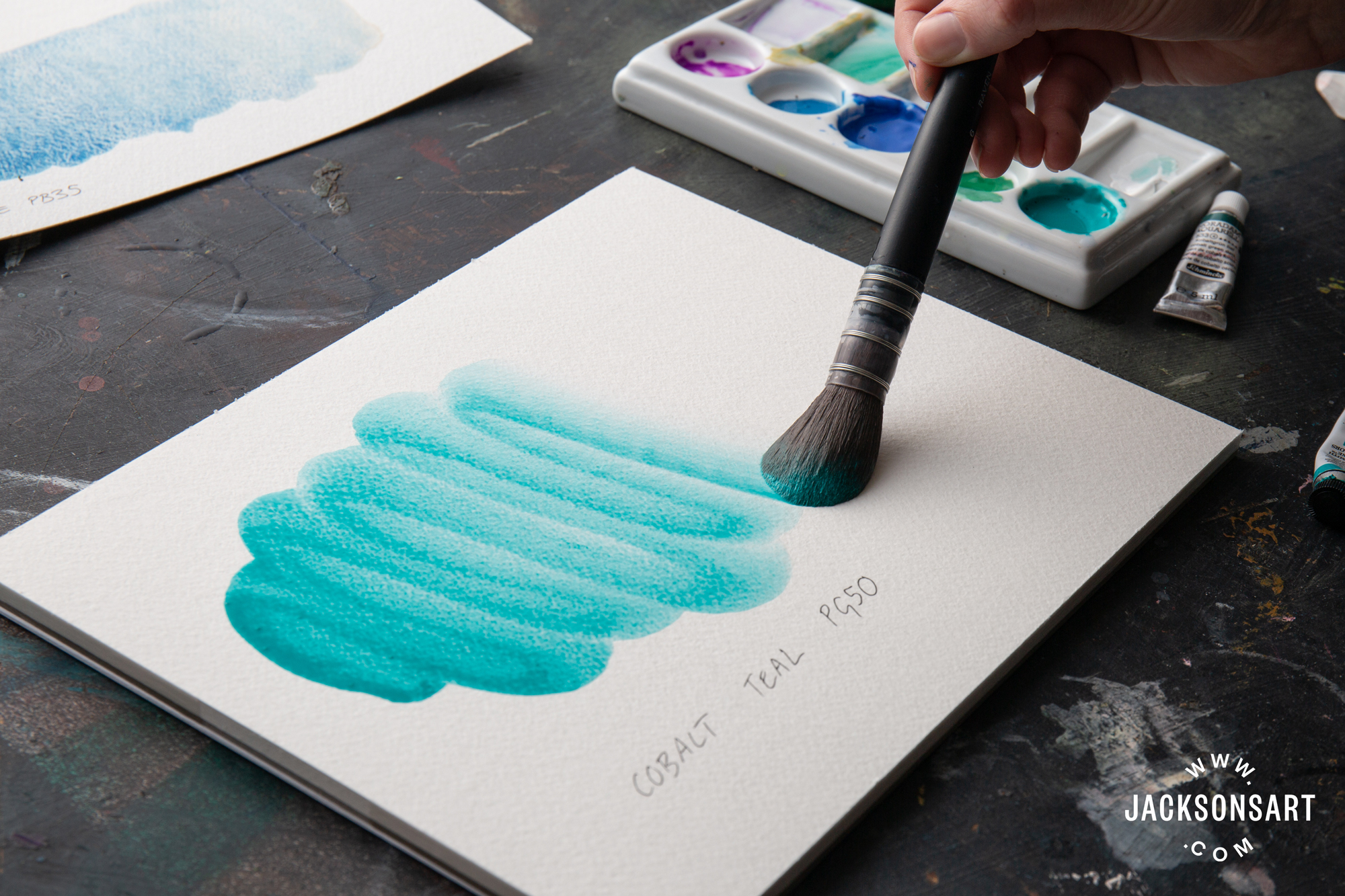 It can create some very vibrant mixes, particularly with Lemon Yellow to make almost fluorescent greens. With orange, or a red-toned earth pigment like Burnt Sienna, it makes an interesting range of green-browns. 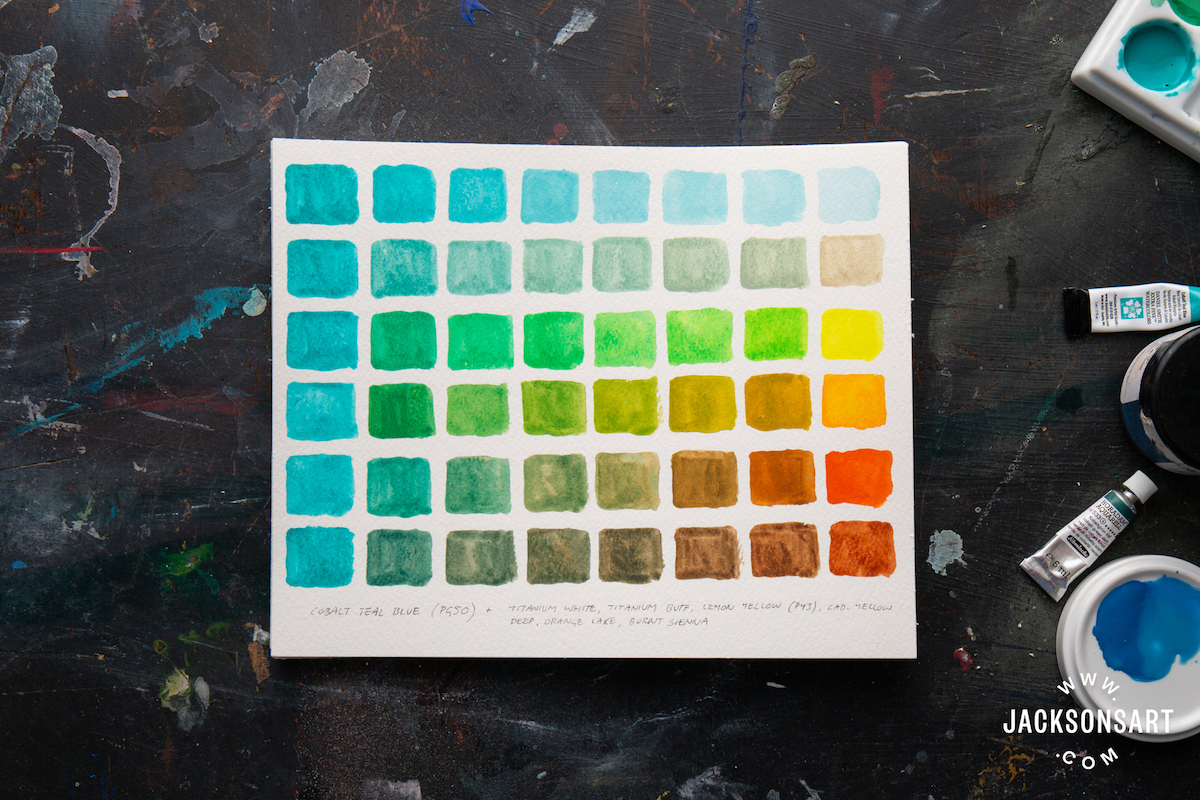 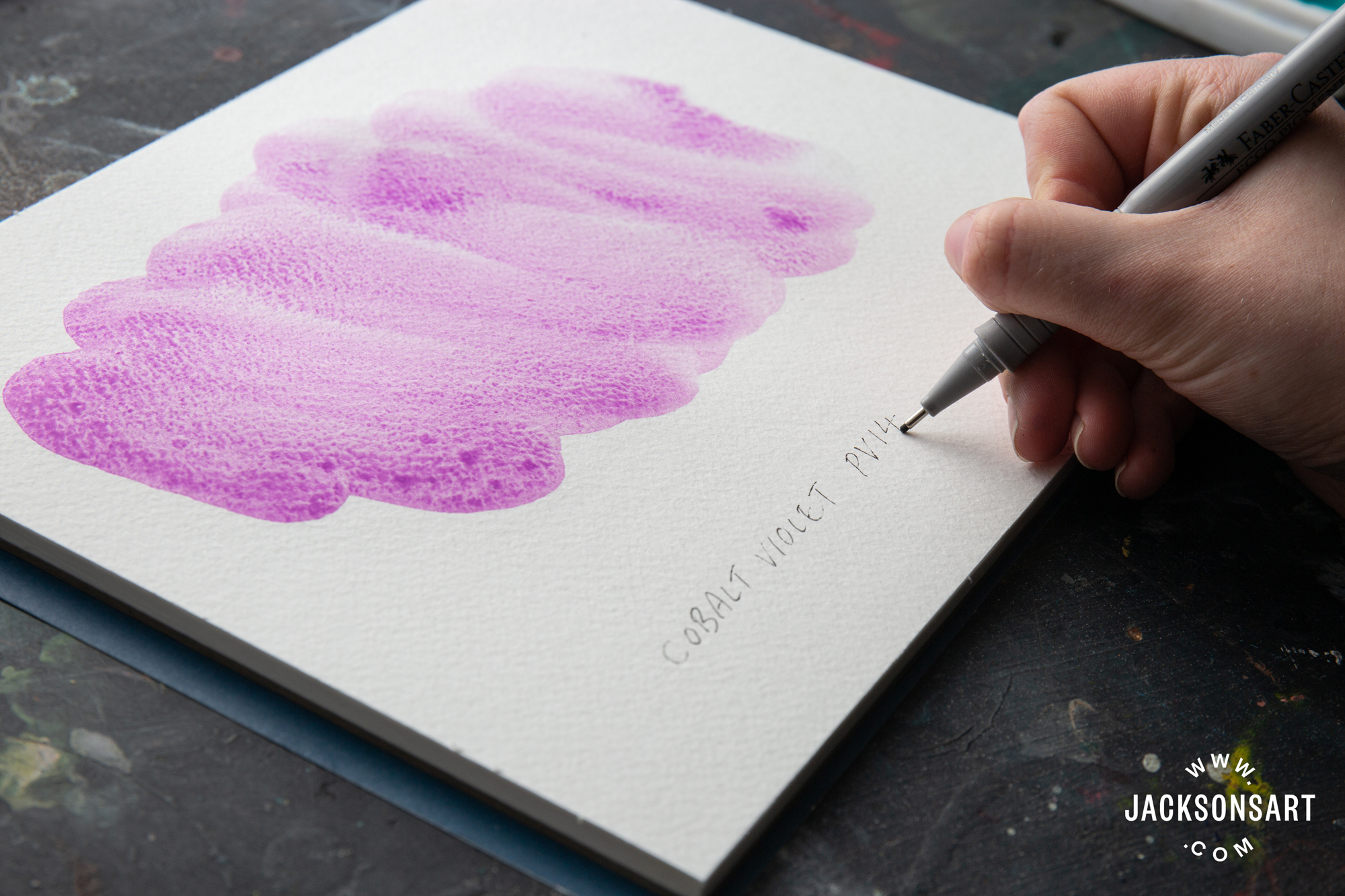 Cobalt Violet (cobalt phosphate) was the first true violet pigment. Discovered in 1859, it is a semi-transparent to opaque cool pink. It is an expensive pigment with a very low tinting strength, and as a result it was mostly replaced in artist palettes by Manganese Violet (PV16) when it was introduced in 1868.

Its low tinting strength makes it quite difficult to mix with, and in the mixing chart below it was difficult to add other colours without completely losing the Cobalt Violet. But with a delicate touch it is surprisingly versatile; with a blue-toned green like Viridian it makes some soft greys, and with Cobalt Blue it makes some intense violets. One of its appeals for watercolourists is its granulation, which can be used to create textural effects. 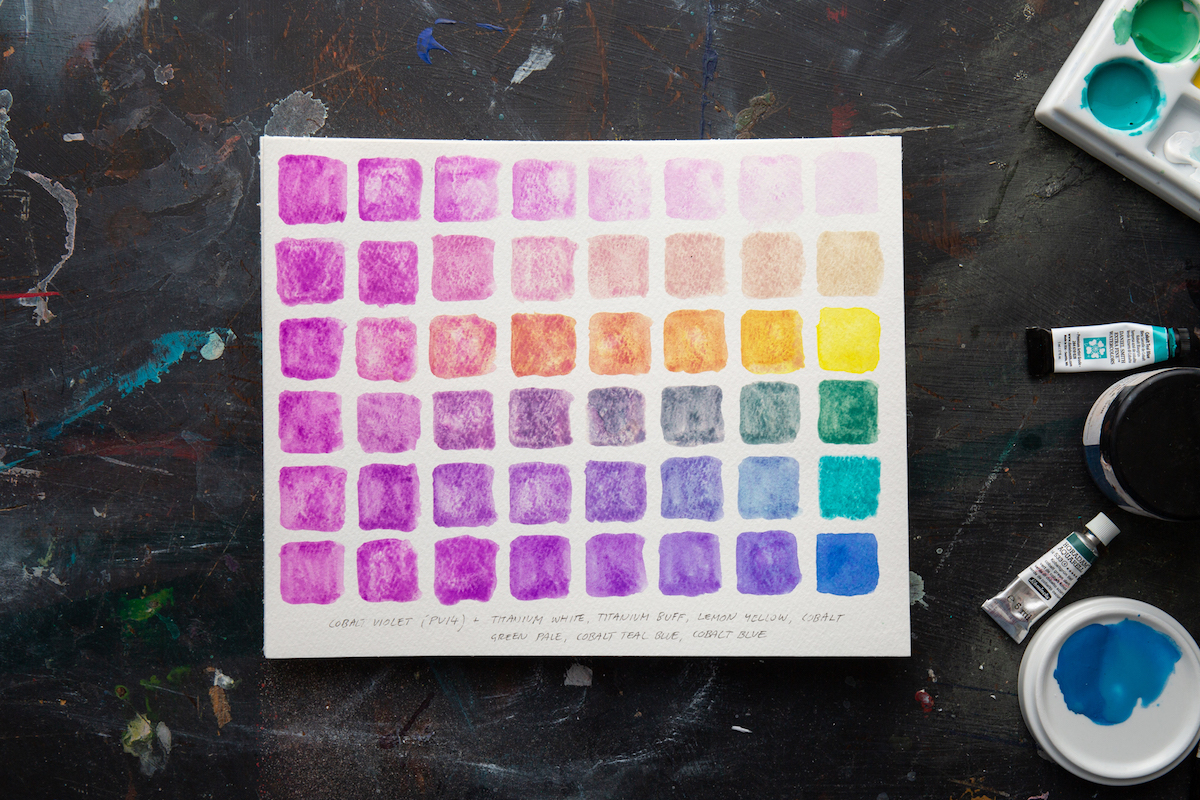 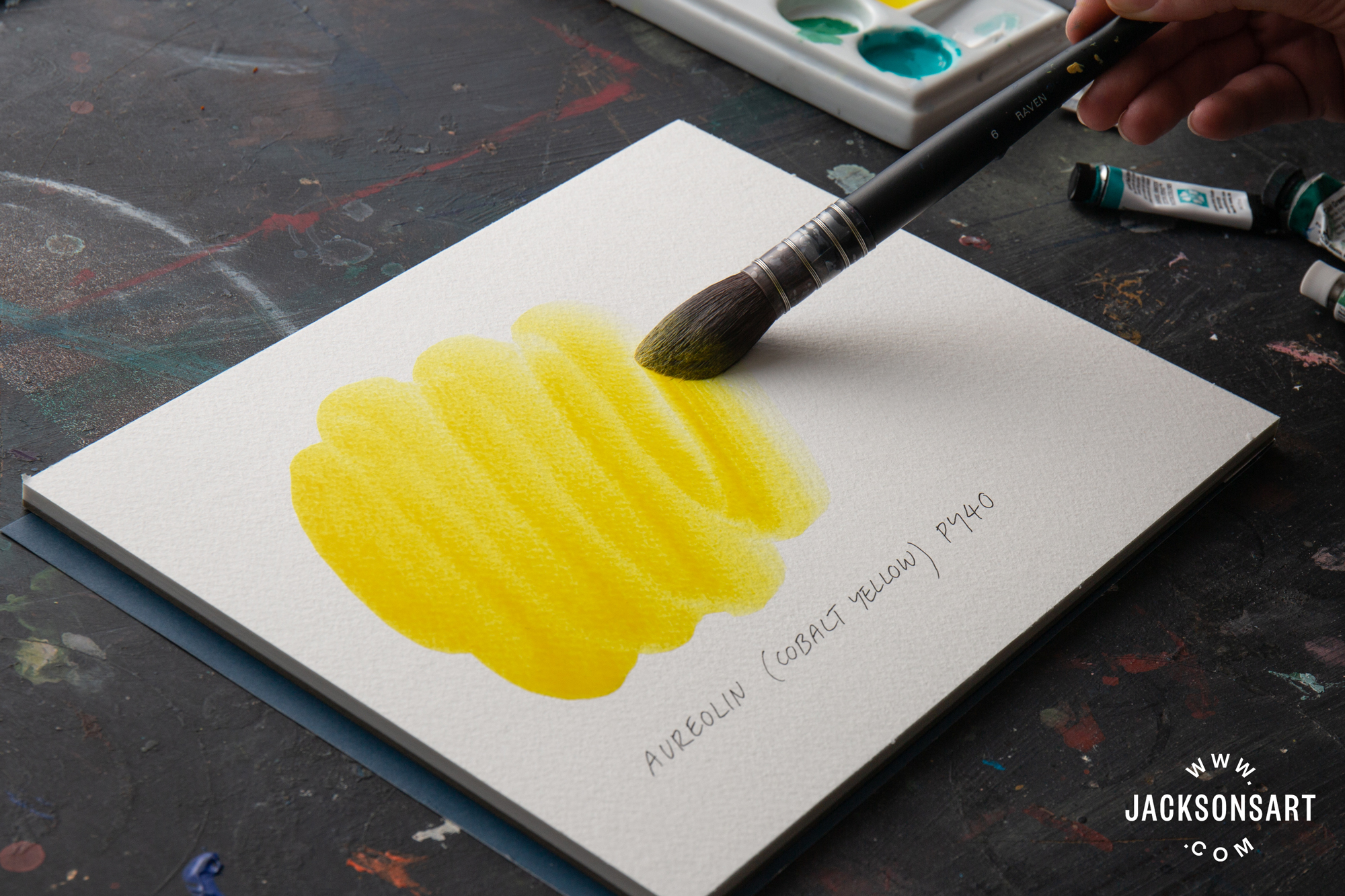 Cobalt Yellow (potassium cobaltinitrite), often known as Aureolin, was first made in 1848. It is semi-transparent and moderately tinting, making it an excellent glazing and mixing colour. However, unlike the other Cobalt pigments, there are concerns about its lightfastness as it can turn brown over time. It remained popular in artist palettes until the end of the 19th Century when it was largely replaced by Cadmium Yellow, a highly lightfast alternative. 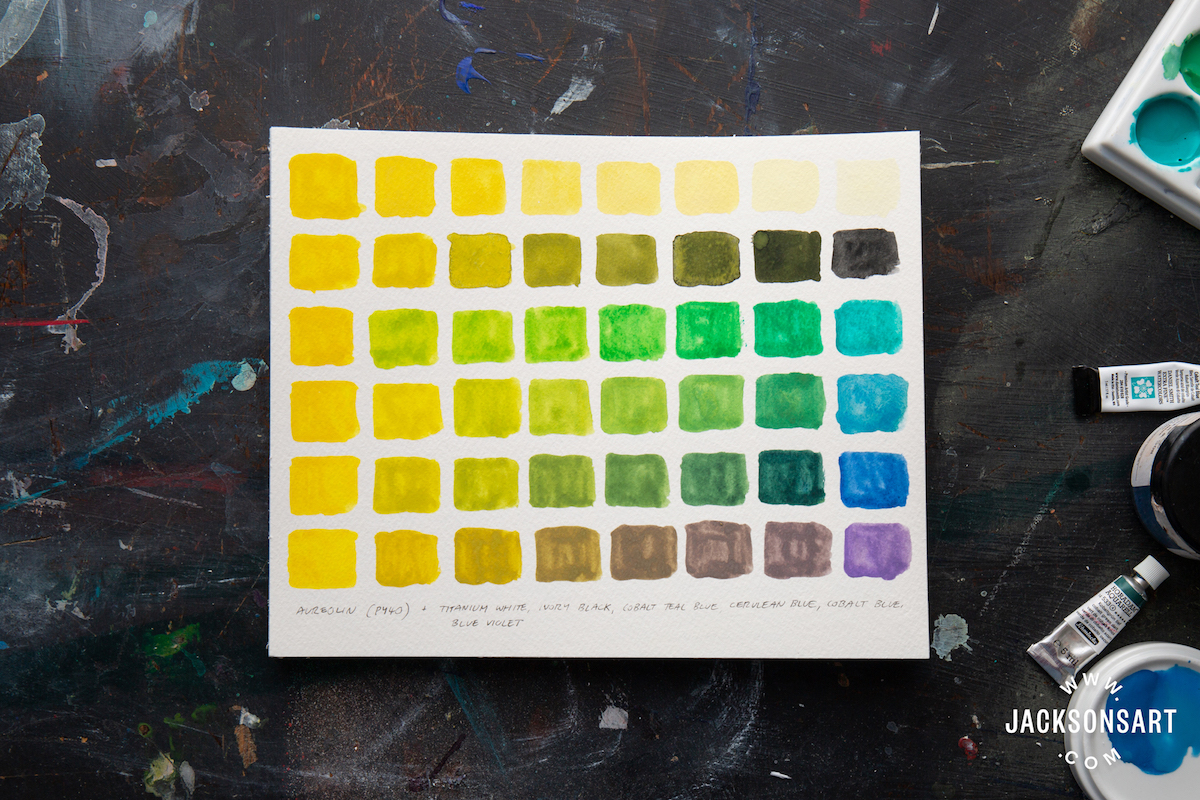 The Cobalt family of pigments include a wide range of colours, including deep forest green, warm blue, golden yellow, cold violet, and many variations in between. We’d love to hear how you use Cobalt pigments, please let us know by leaving a comment.