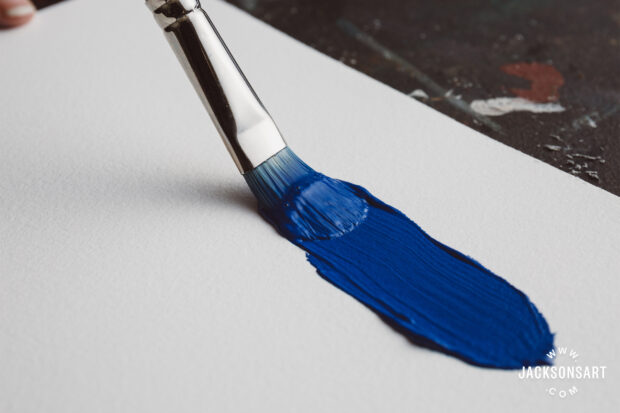 YinMn Blue was discovered by chance in 2009 by Professor Mas Subramanian and Andrew E. Smith, who was then a graduate student at Oregon State University. Its unusual name refers to the periodic symbols for the elements it contains – Yttrium (Y), Indium (In), and Manganese (Mn). It is useful for a number of industrial applications, including infrared-reflective coatings, but its lightfastness, opacity, and permanence make YinMn Blue an ideal artist pigment. 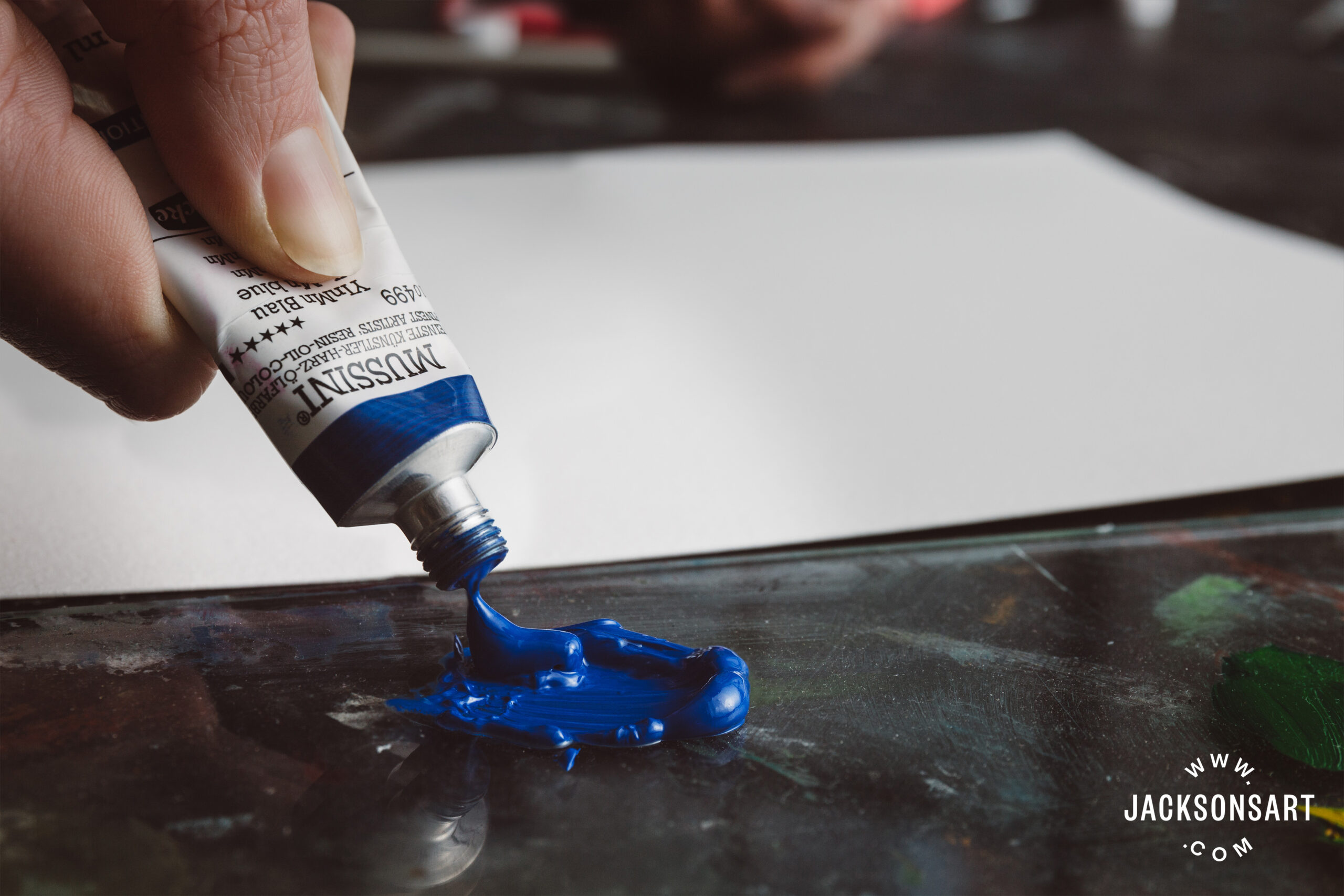 The Significance of Blue Pigments

Blue is one of the rarest colours in nature, and creating it for the artist’s palette has been a challenge throughout history. For centuries, the only source for blue pigments were minerals like Lapis Lazuli and Azurite, which were rare and expensive. The Ancient Egyptians were the first to make a synthetic blue pigment which could be used instead of a mineral blue pigment. Egyptian Blue, thought to be made by heating sand, copper, and lime, remained in use until around 800 AD, when the recipe for its manufacture was lost.

When Lapis Lazuli reached Europe in the 13th Century, it was the most expensive pigment used by artists due to its rarity and labour-intensive preparation. Because of this, in Renaissance Europe it came to symbolise the divine, and was reserved only for the most important subjects – most notably for the robes of the Virgin Mary. In 1824 chemist Jean Baptiste Guimet discovered French Ultramarine Blue, a synthetic pigment which is chemically identical to Lapis Lazuli. French Ultramarine is rich in colour and cheap to produce, and its discovery is one of the greatest advancements in artist colours. 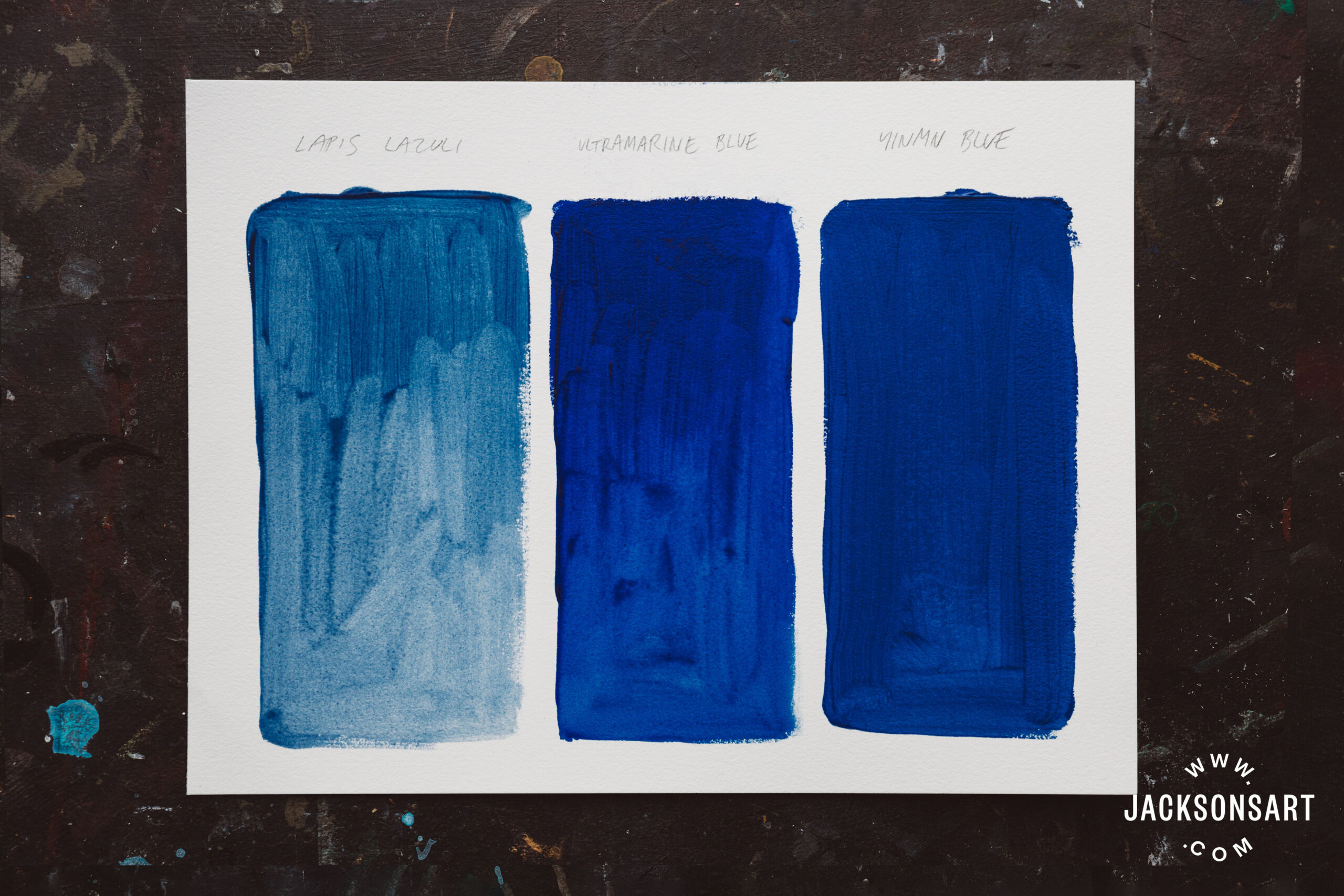 Artists have long had a fascination with the colour blue. 15th Century artist Cennino Cennini wrote that Lapis Lazuli is “a glorious, lovely and absolutely perfect pigment beyond all the pigments. It would not be possible to say anything about or do anything to it which would not make it more so.” When artist Yves Klein developed International Klein Blue more than 500 years later, he was exploring the transcendent, extra-dimensional quality of the colour. “Blue is the invisible becoming visible”, he wrote, “Blue has no dimensions, it is beyond the dimensions of which other colours partake.” It’s hard not to think that the discovery of a new blue pigment is particularly exciting.

What Does YinMn Blue Offer in an Artist’s Palette?

For testing I am using Schmincke Mussini YinMn Blue oil paint, a limited edition colour in their range. Pigments can vary depending on how it is produced and the binder that it is suspended in, so the pigment may be different in other ranges that carry it in the future.

Straight from the tube, YinMn Blue is opaque and deep, but it has a red hue which is particularly clear when compared with Ultramarine and Cobalt Blue, which are greener in comparison. 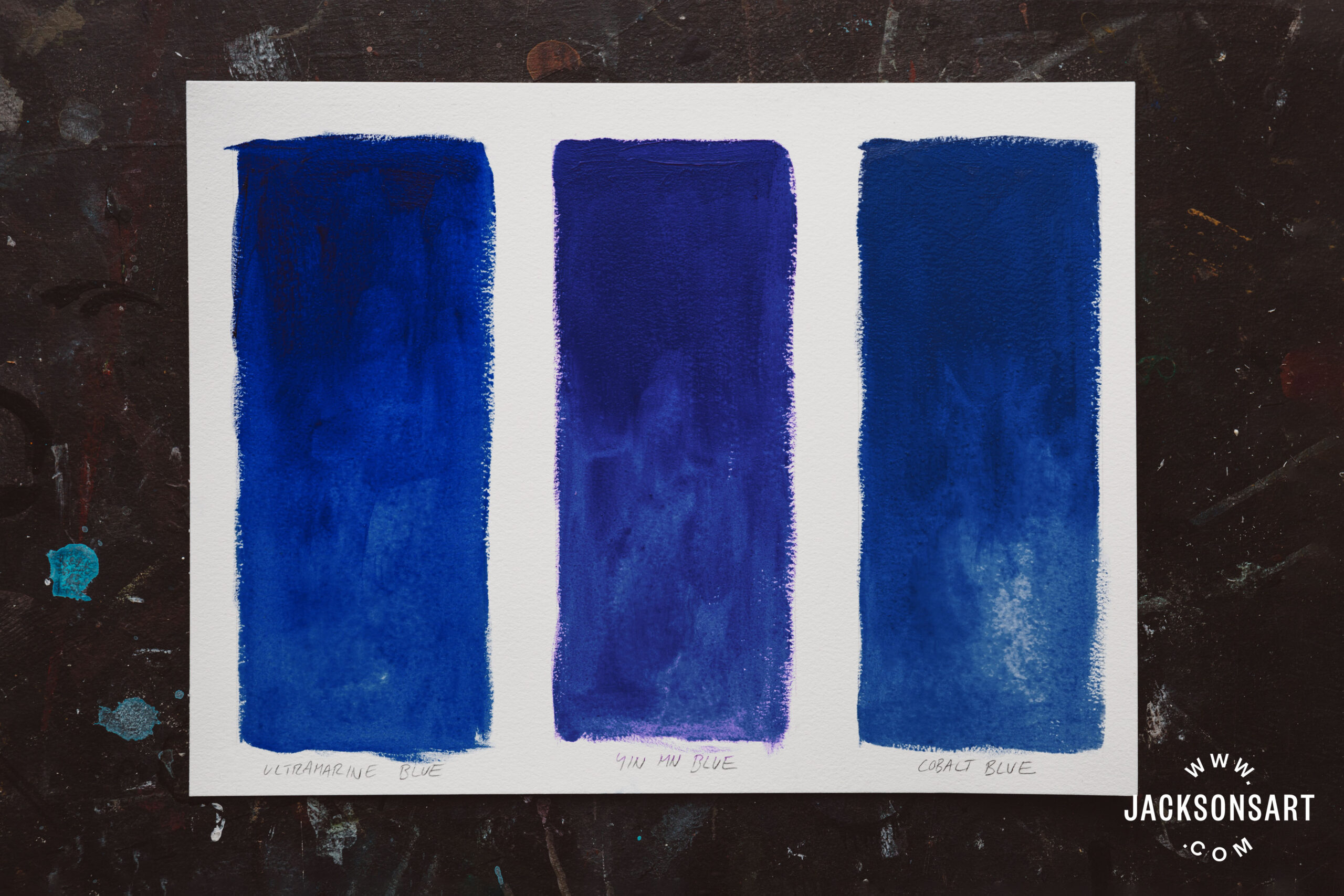 Its red undertones are revealed when mixed in tints with white, where it makes a soft lavender. 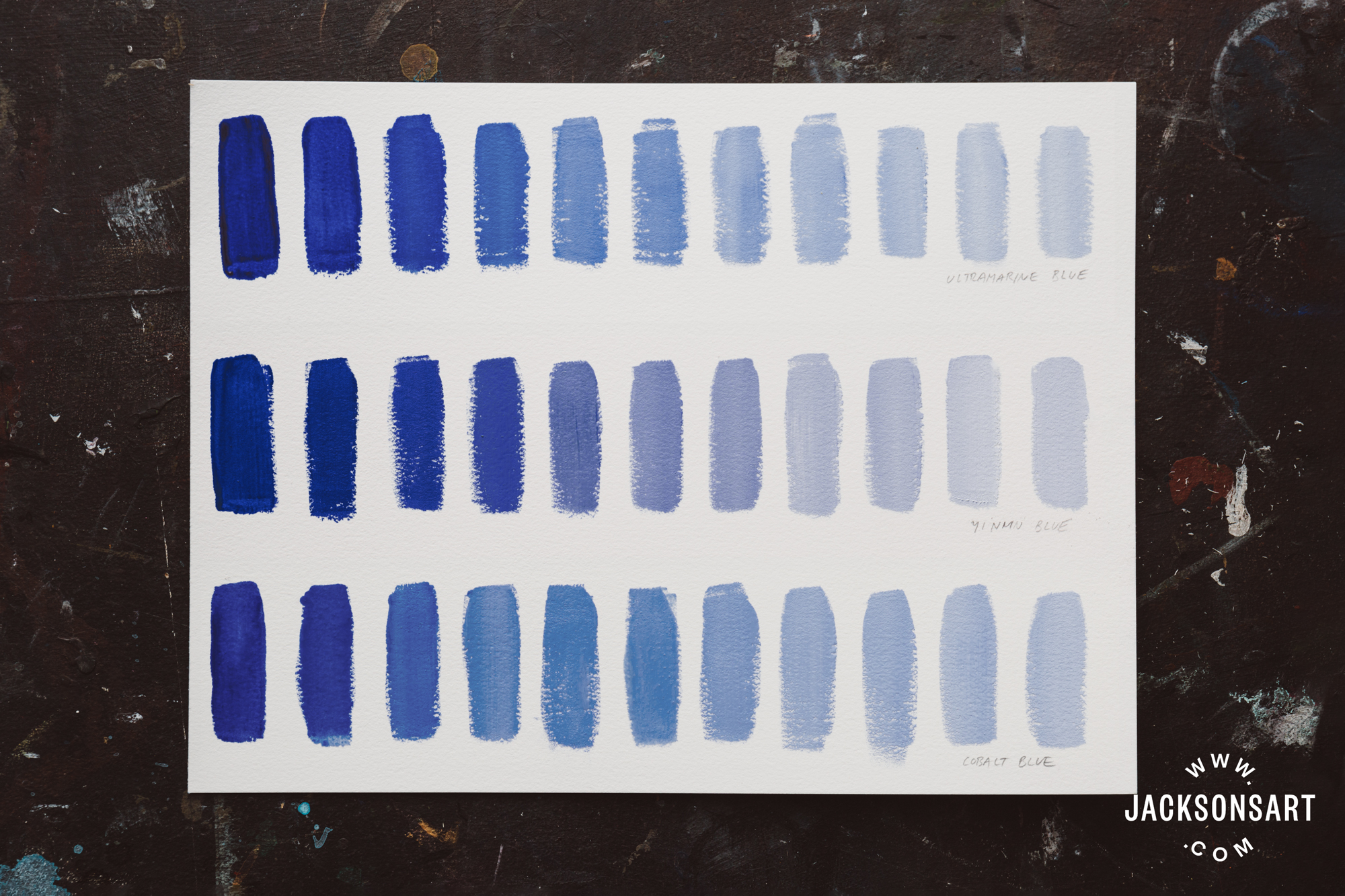 From top to bottom: Ultramarine Blue, YinMn Blue, and Cobalt Blue in tints with Titanium White

Many modern pigments, like Quinacridone and Phthalo pigments, have a very high tinting strength. I was expecting YinMn Blue to be similarly punchy, but while it is highly opaque, it has a modest tinting strength and is quite easily lost when mixed with stronger tinting colours. This subtlety means that it fares well in a palette inspired by the Old Masters, like this one inspired by the palette of Rembrandt: 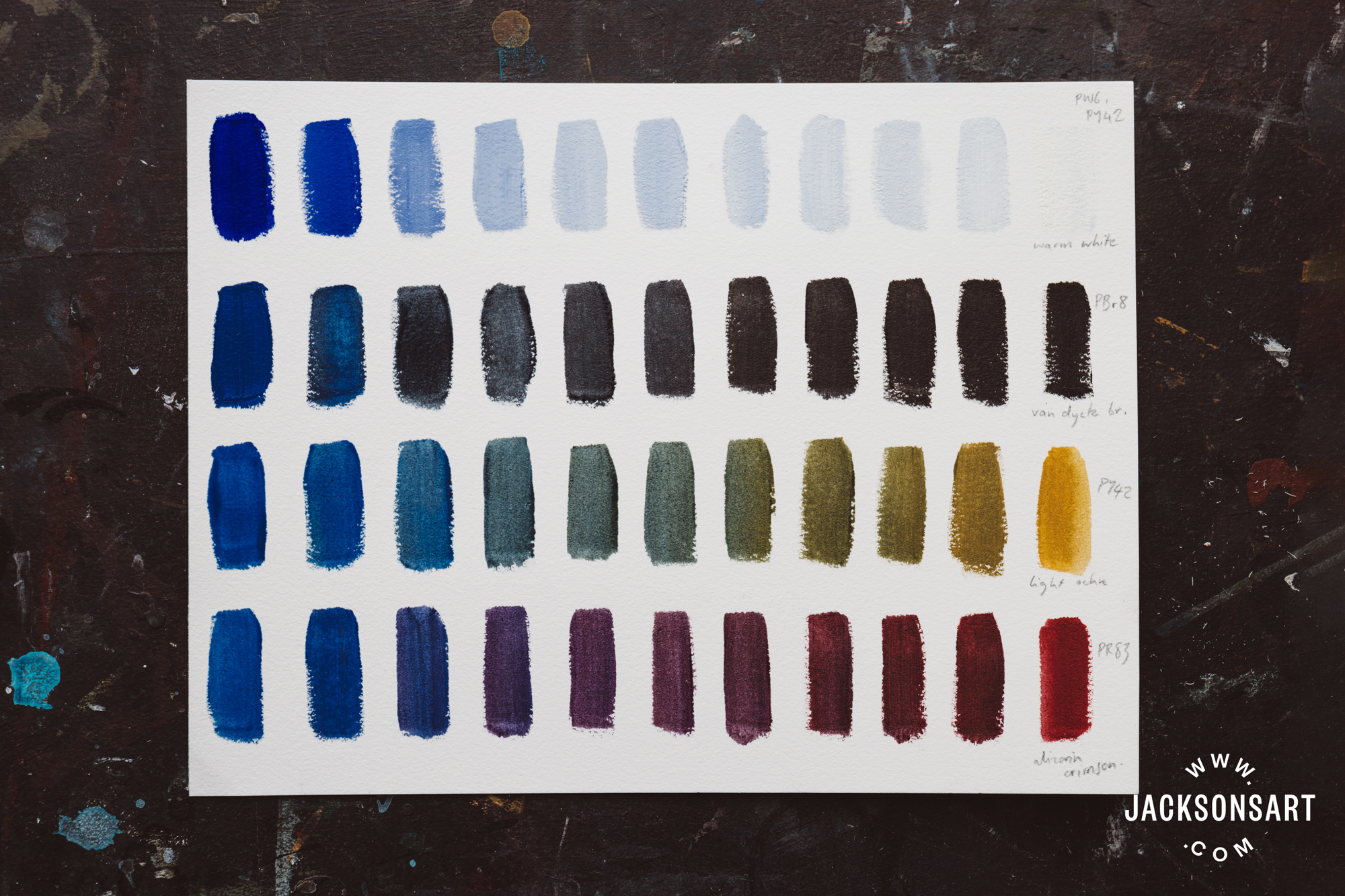 Will YinMn Blue become a staple colour in artist palettes?

YinMn is more environmentally friendly to produce than other blue pigments, and is less toxic than the cobalt-based blue pigments (Cobalt and Cerulean Blue). However, the pigment is very expensive to make due to the elements that it contains, and this makes it less accessible. Whether YinMn Blue will become a widely used pigment remains to be seen, but it is always an exciting moment when a new pigment is discovered. 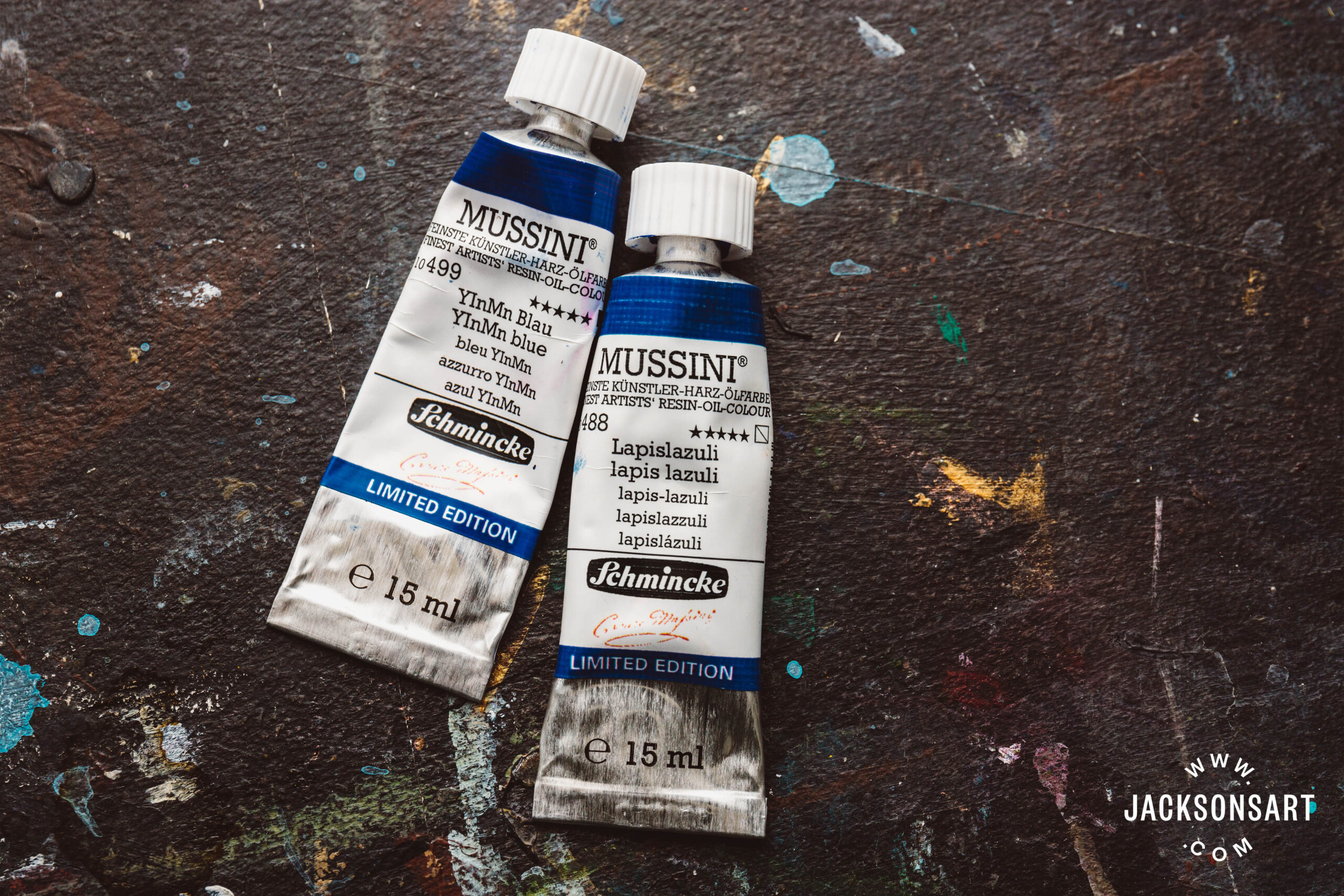 Tubes of YinMn Blue and Lapis Lazuli – one of the oldest blue pigments next to the newest. Both are available from Schmincke Mussini in limited edition 15ml tubes.