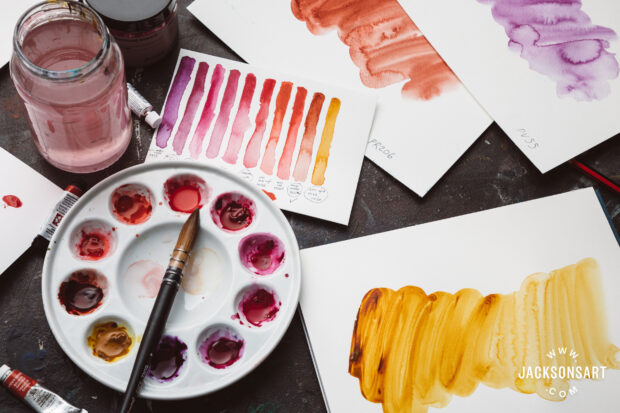 In this Pigment Stories series, I have looked at two of the three most significant pigment discoveries of the 20th Century – Phthalocyanine and Azo pigments. The third is the Quinacridone family of pigments.

The first Quinacridone compound was discovered in 1896, but its suitability as a pigment wasn’t recognised until 1955. A commercially viable industrial process for synthesising Quinacridone pigment was developed, and in 1958 it was introduced to the market. 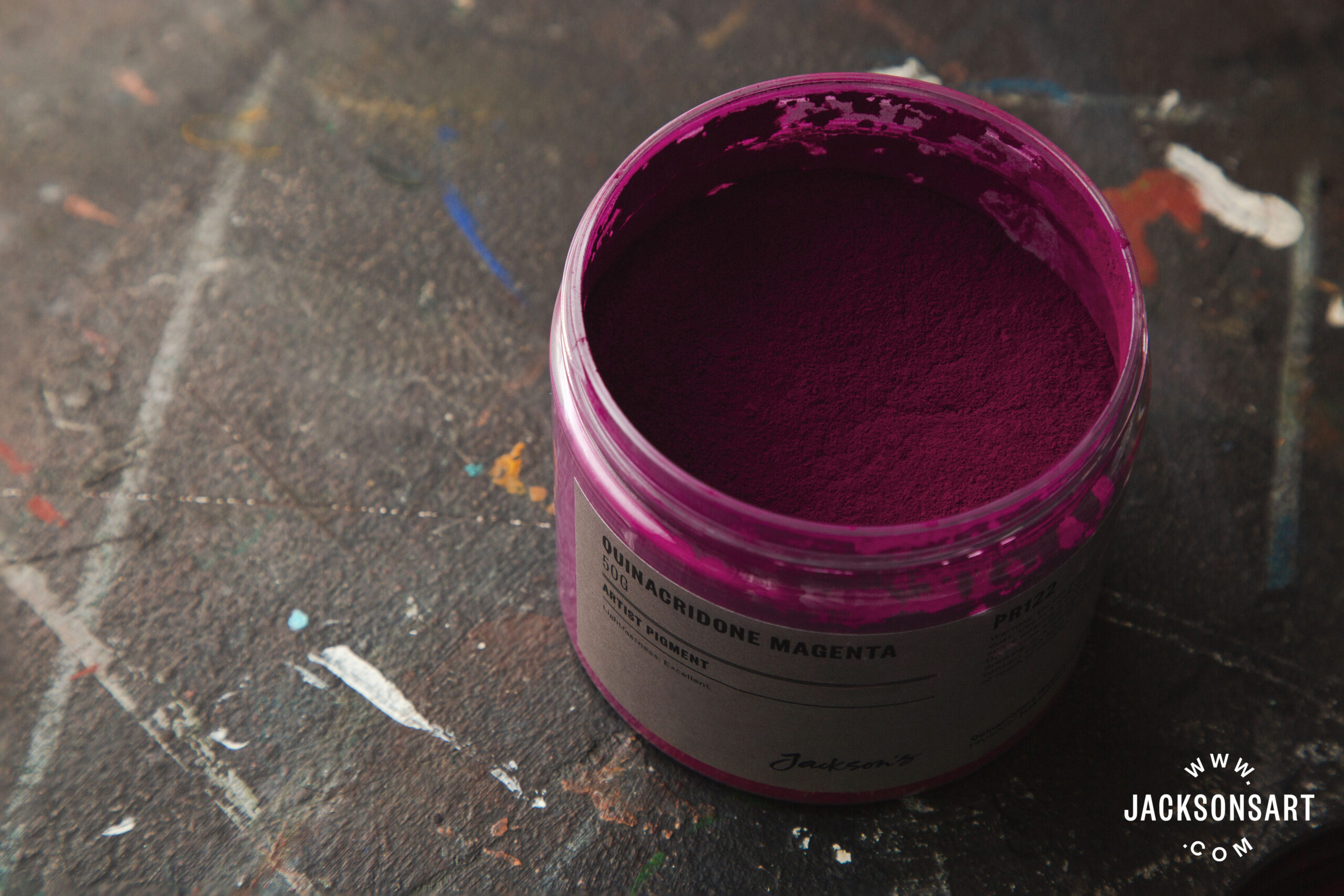 Strong in colour and transparent, Quinacridone pigments are extremely stable with good resistance to light, heat, and solvents. This makes them ideal colourants in the production of cosmetics, cars, and plastics, and they also provide a spectrum of violet, magenta, and red pigments for artists working in a variety of mediums. Quinacridone colours were quickly adopted by artists of the abstract expressionist movement, who loved their intensity of colour.

Quinacridone pigments range between purple and orange, but are most commonly pink-red pigments. The hue is determined by the pigment particle size, as well as small differences in the crystalline structure of Quinacridone pigment molecules. For example, a latticed structure produces a pink-red colour, and a more linear structure makes a colour that leans more towards orange. 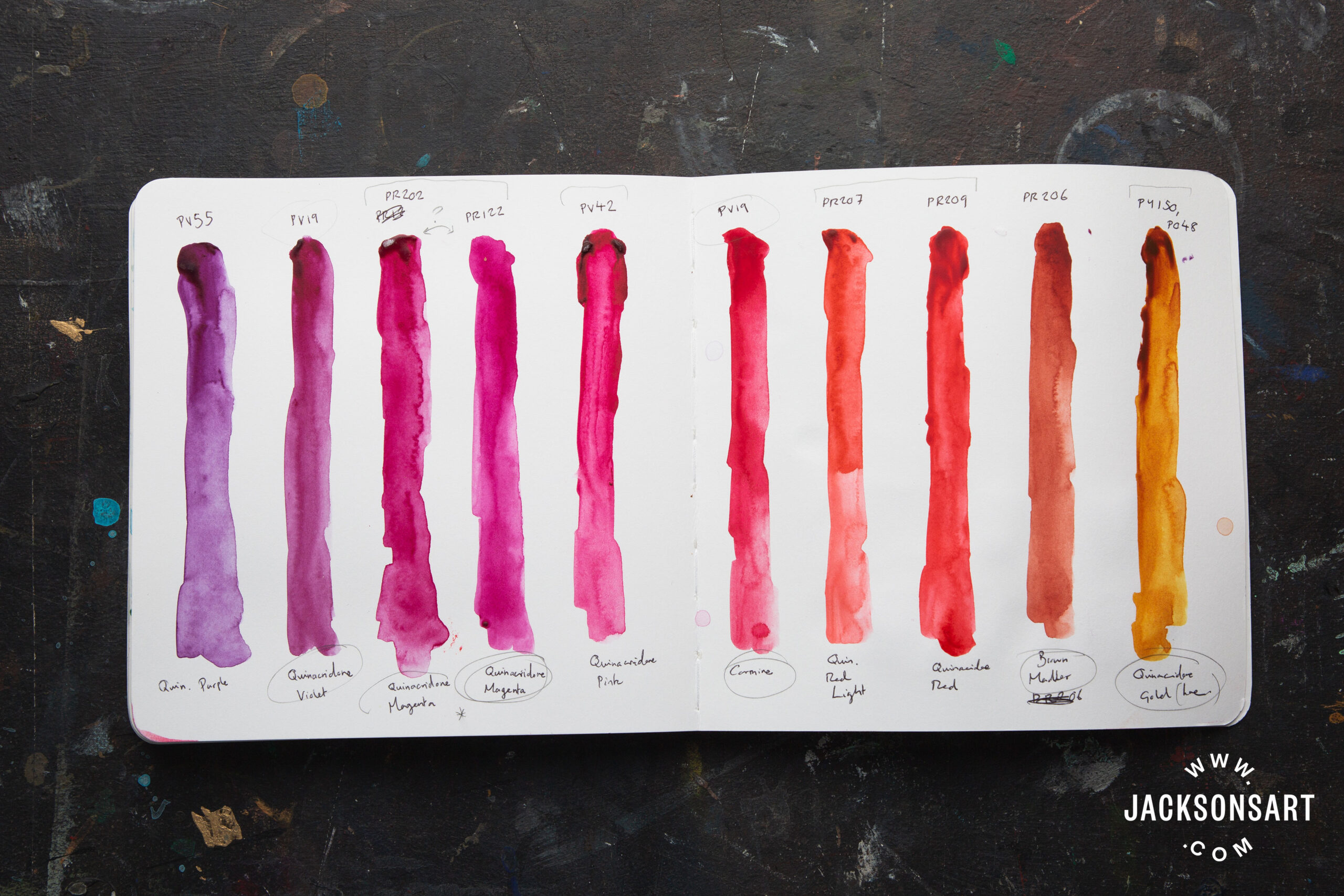 The spectrum of Quinacridone pigments, from purple to gold.

In the following swatches and colour mixing charts I have used watercolour (the largest variety of Quinacridone pigments are found in watercolour ranges), but most are also available in oil, acrylic, gouache, and ink ranges. I have introduced each pigment with its generic name (i.e. Quinacridone Rose), but the names of the paints that contain each pigment vary. You can click on any image to see it larger and in more detail. 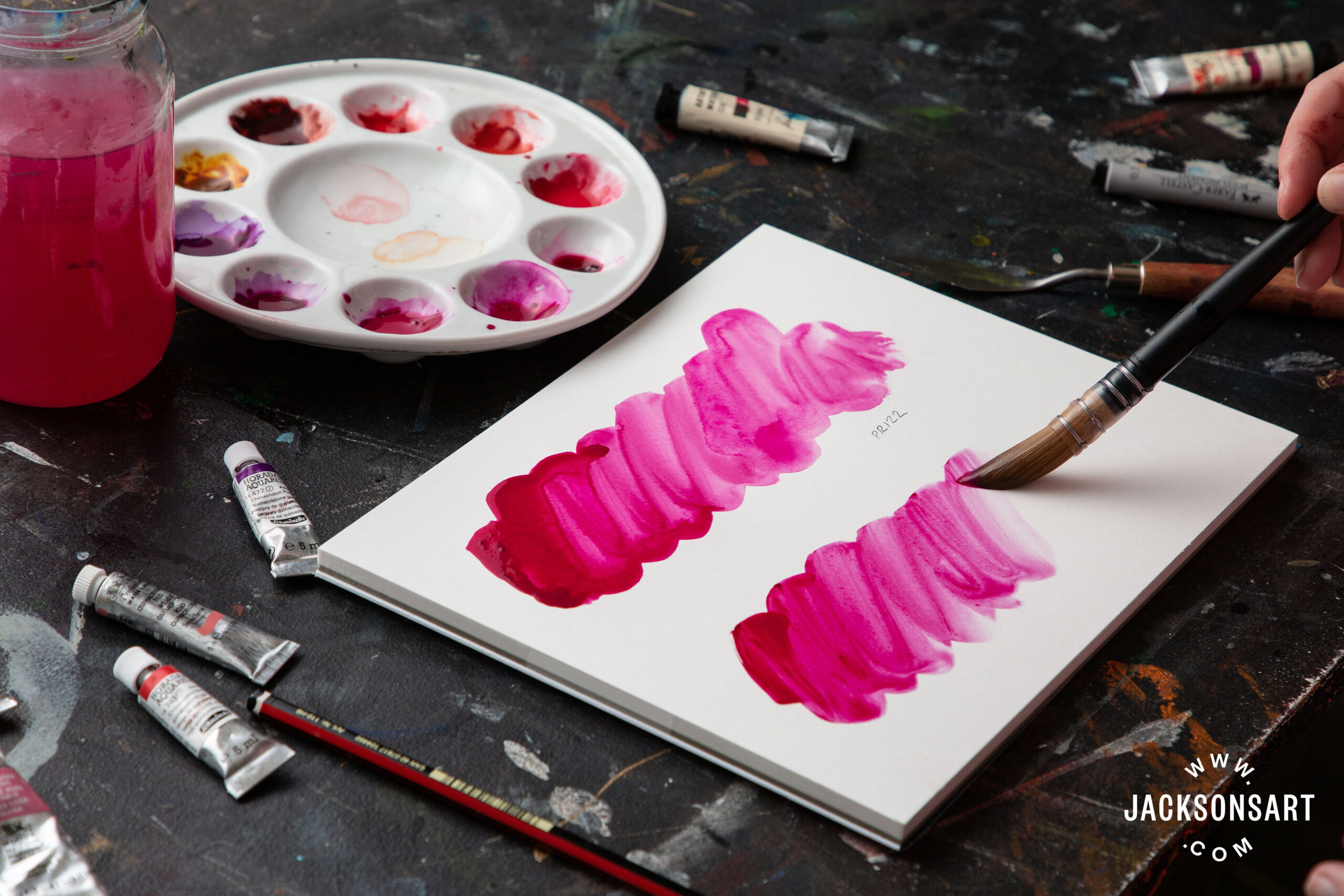 While PR122 and PR202 look very similar when wet, when they are dry to seems that PR122 is a slightly cleaner colour, better for the most vibrant mixtures (it’s worth noting that some Quinacridone pigments have a significant wet-to-dry colour shift, particularly in watercolour): 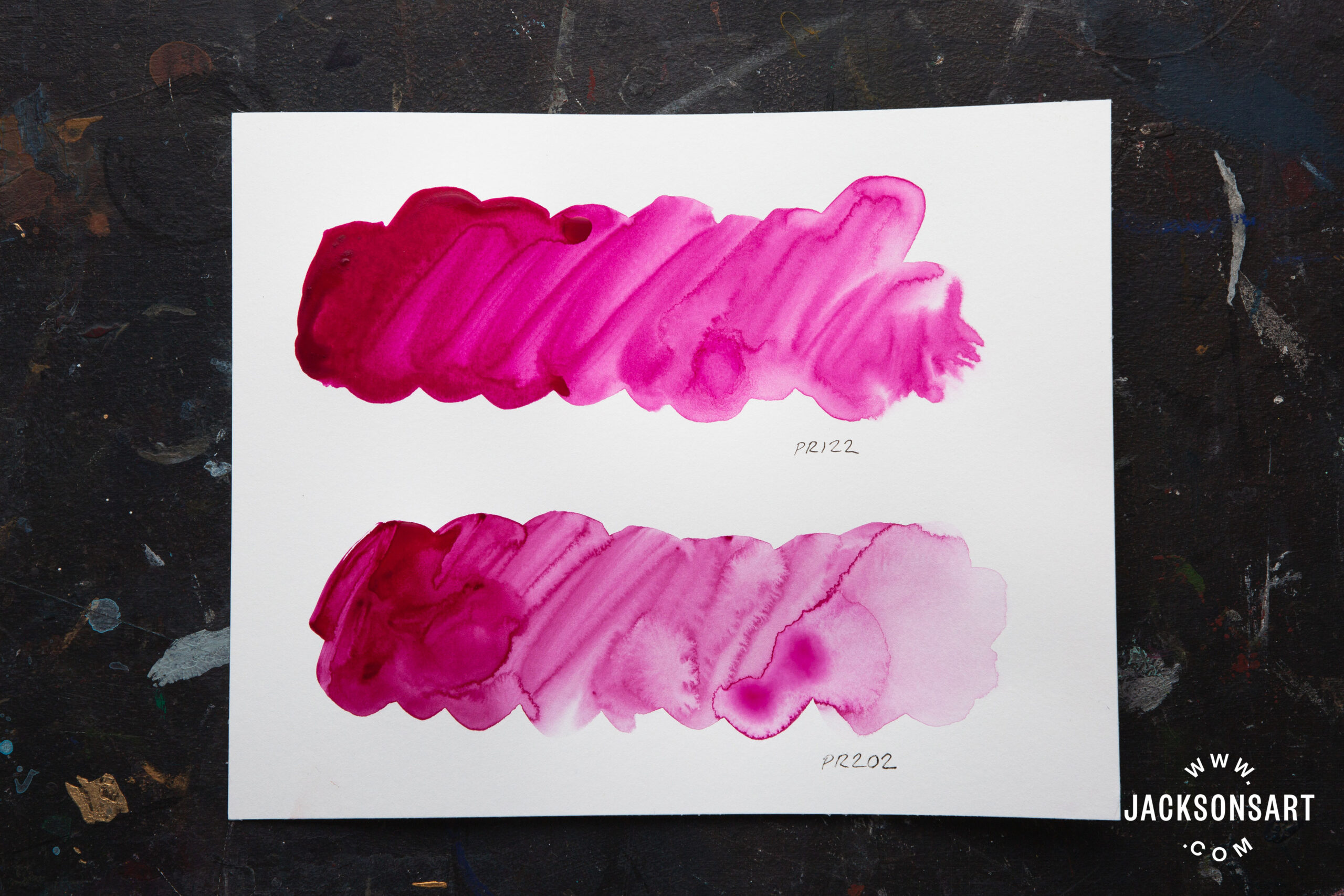 Quinacridone Magenta is a very floral colour, popular with botanical artists. Because of its purple bias, it is easily nudged to make deep violet by Ultramarine Blue (PB29). With Yellow Ochre (PY42) and Burnt Sienna (Pbr7) it makes deep red and orange respectively, which become peachy when mixed with white. When mixed in equal parts with Phthalo Green (PG7) it makes a deep chromatic black. 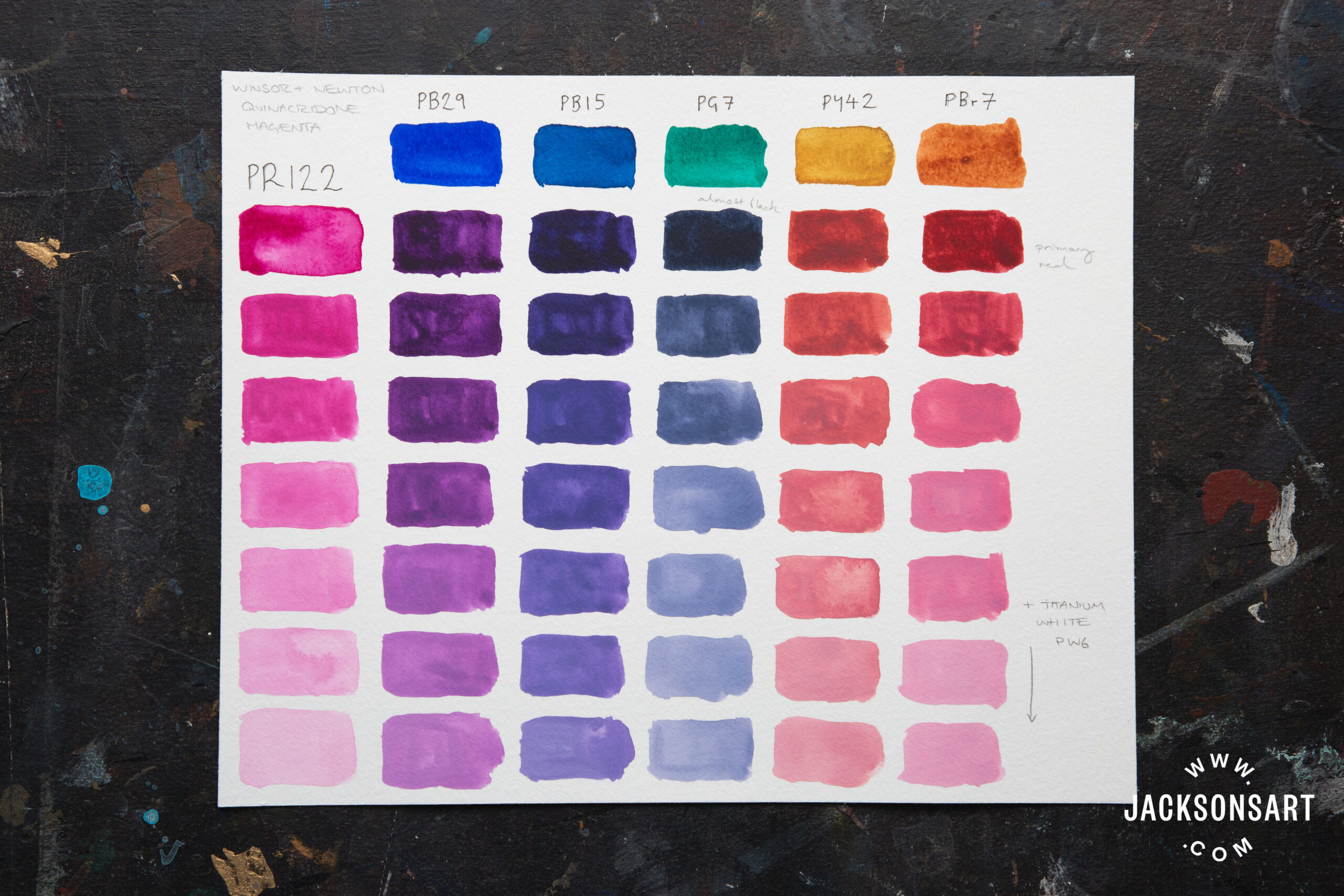 Another commonly found pigment, PV19 can range between a smoky violet and a bright rose. The rose-shade is less purple than Quinacridone Magenta, but still leans towards blue. The violet-shade is a reddish-purple. 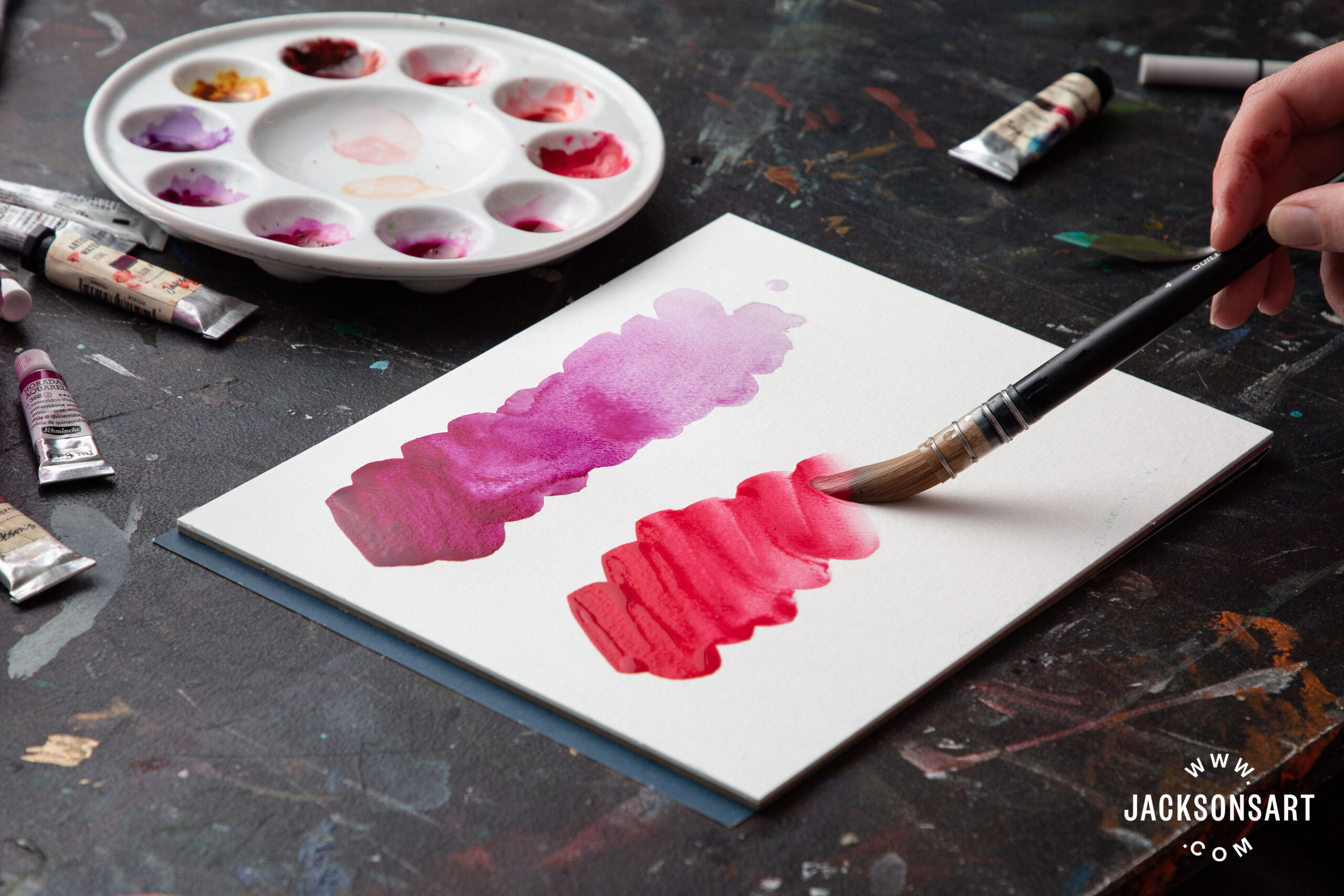 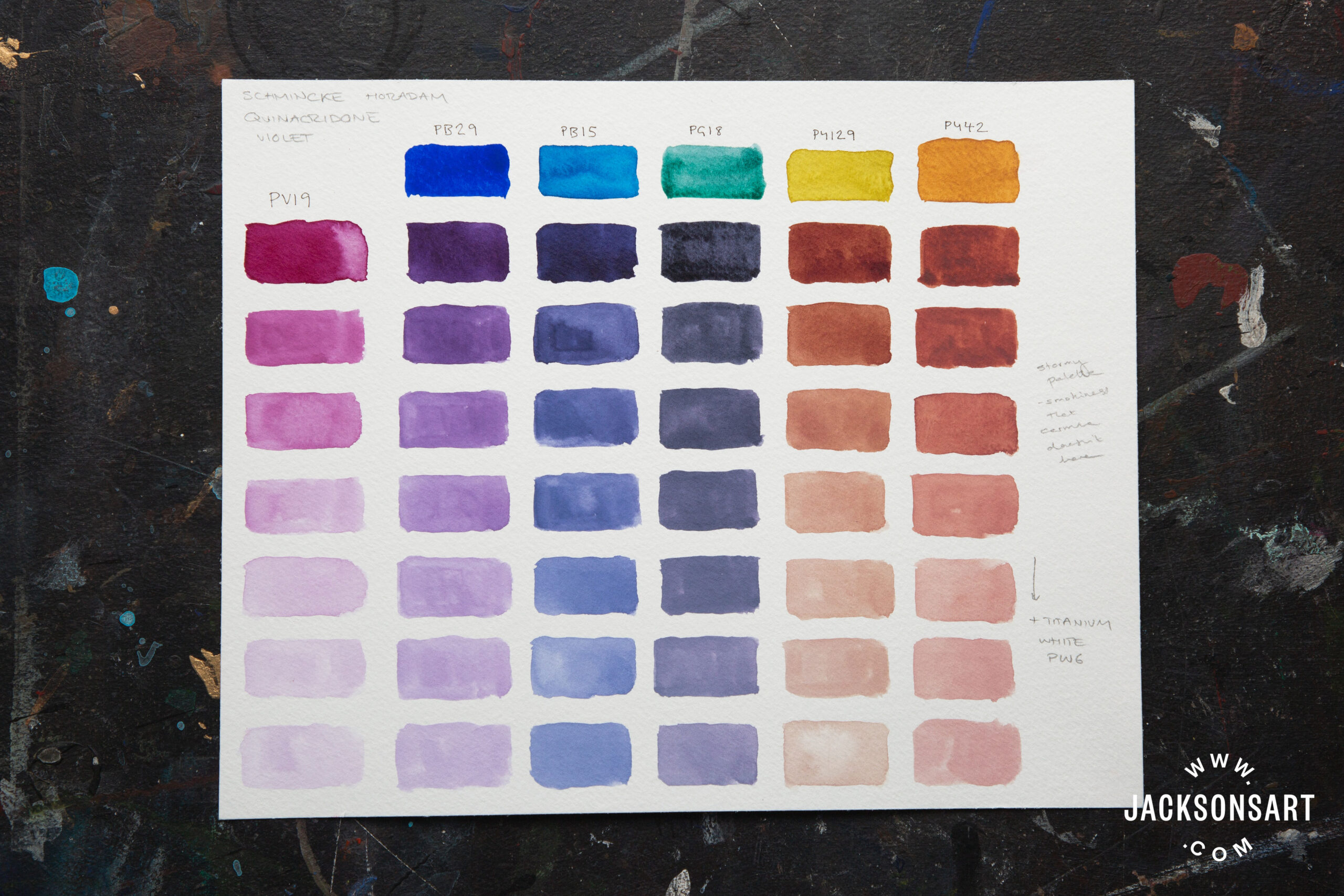 The overall feeling of the above palette is much more stormy than with Jackson’s Carmine, which was mixed with the same colours: 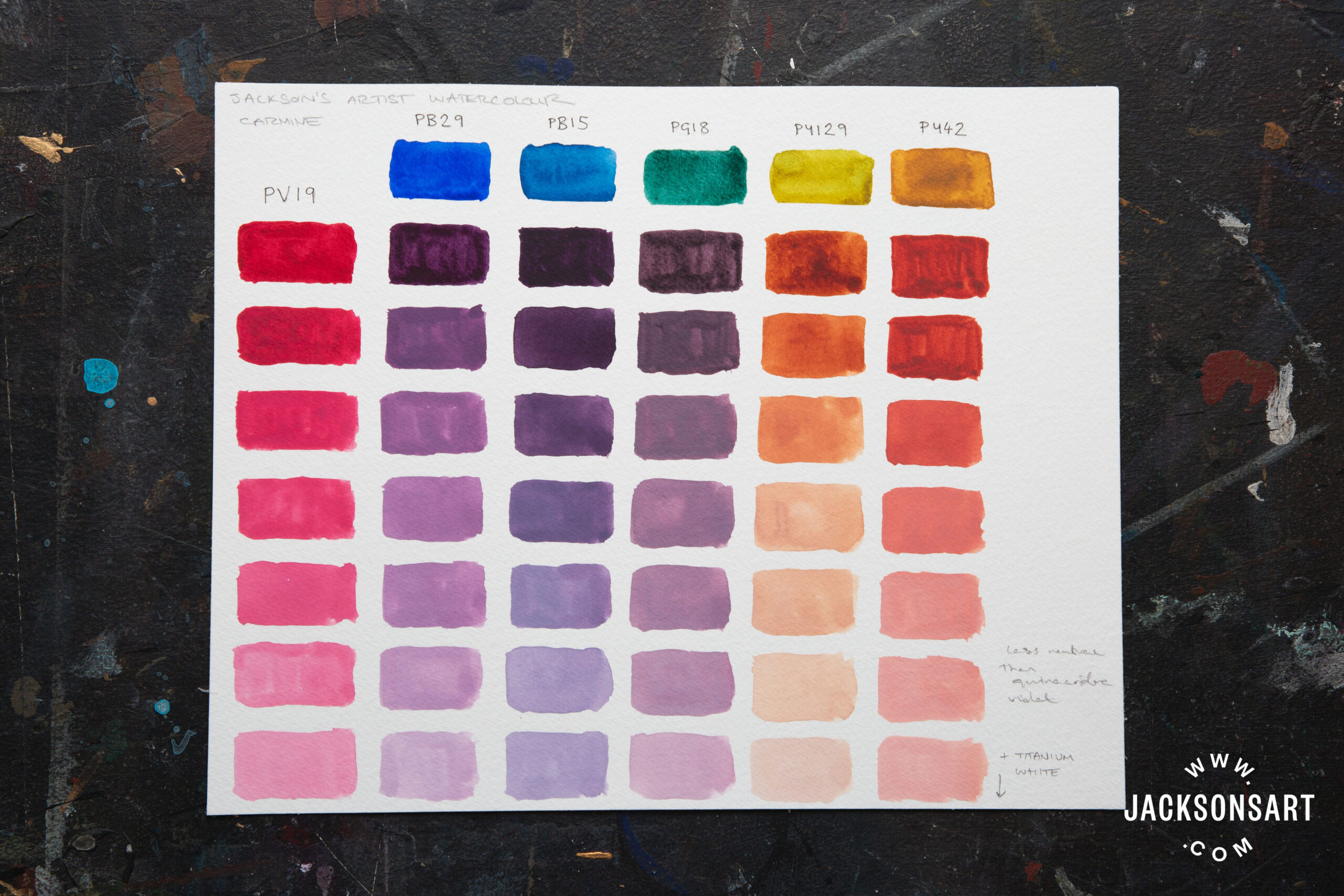 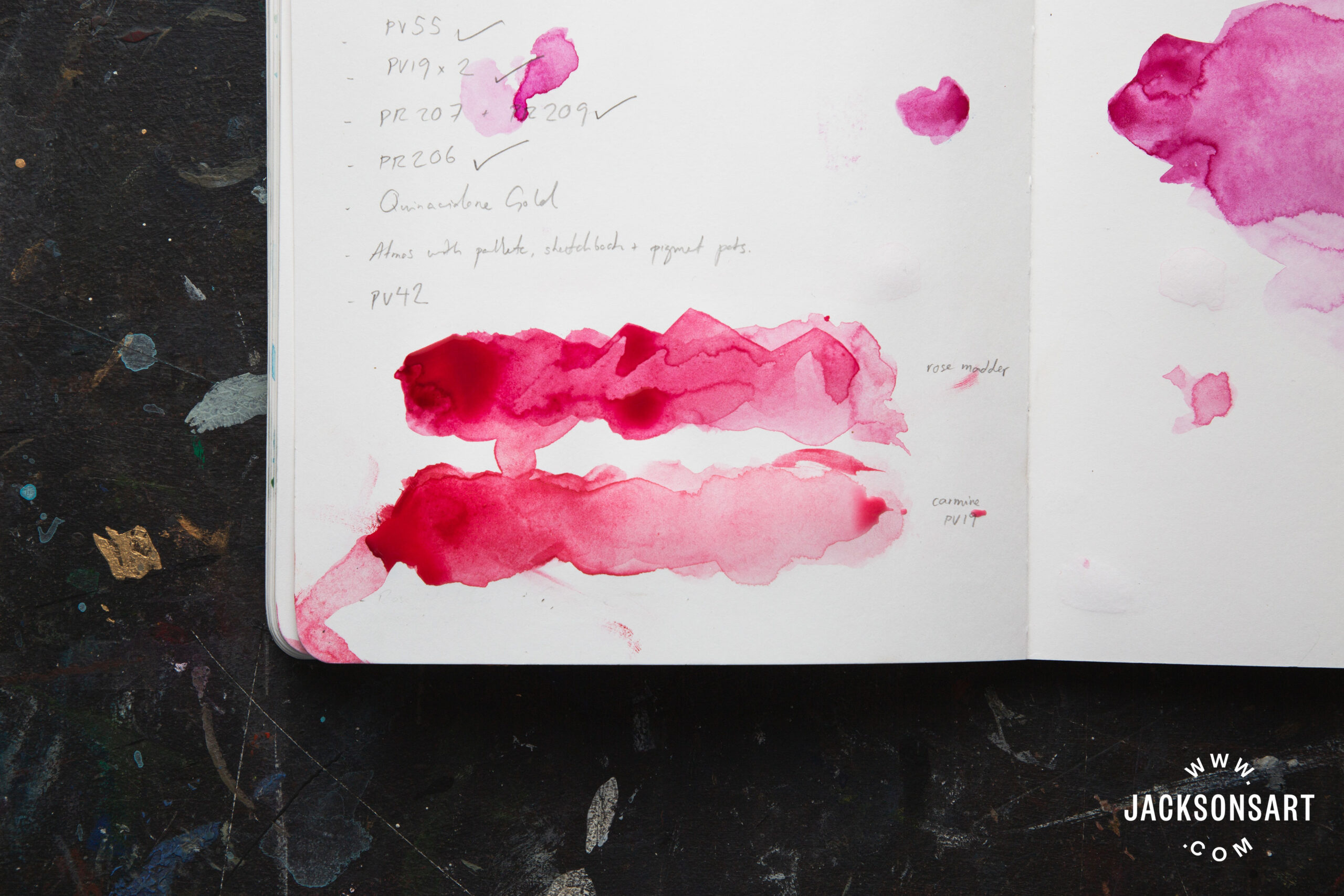 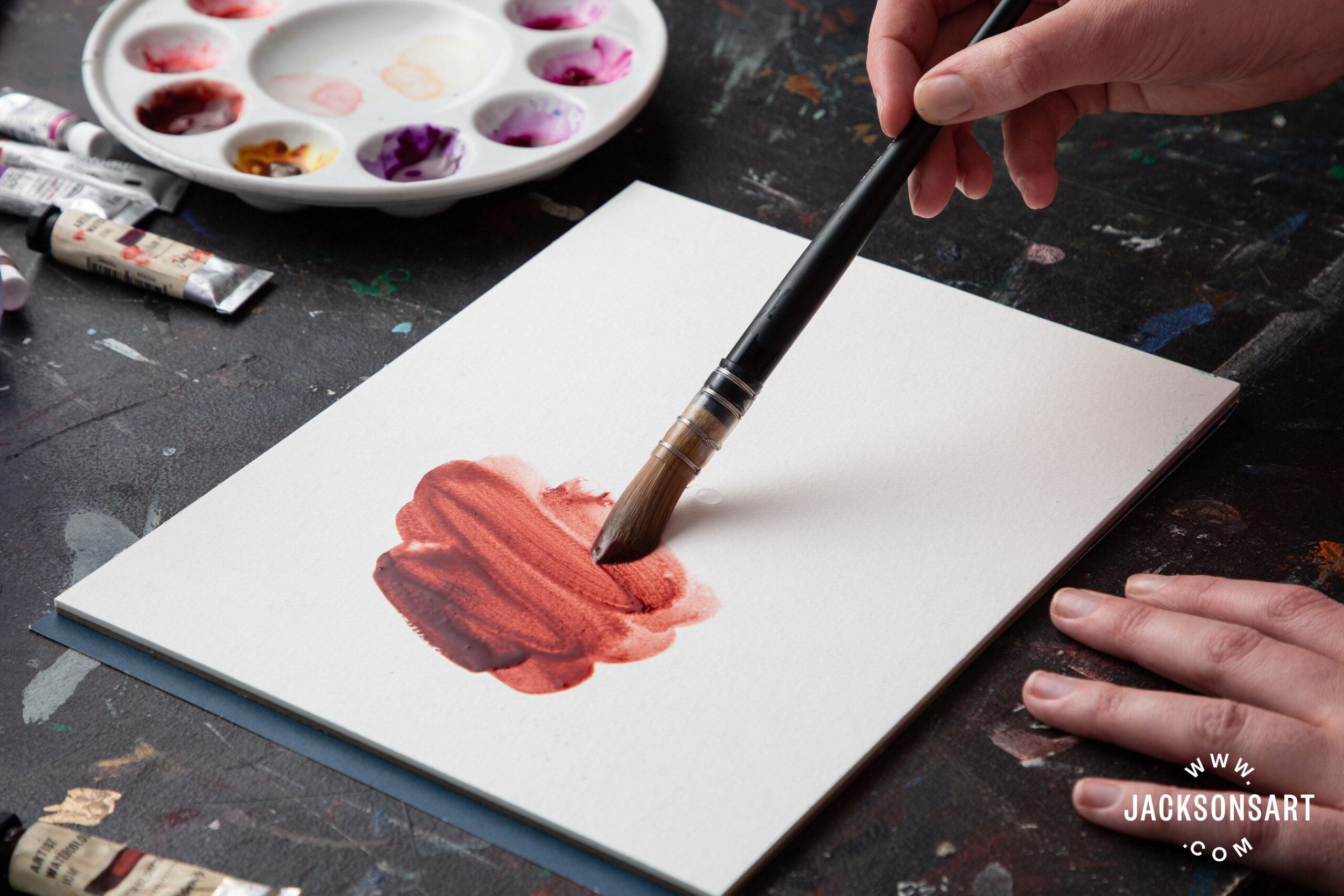 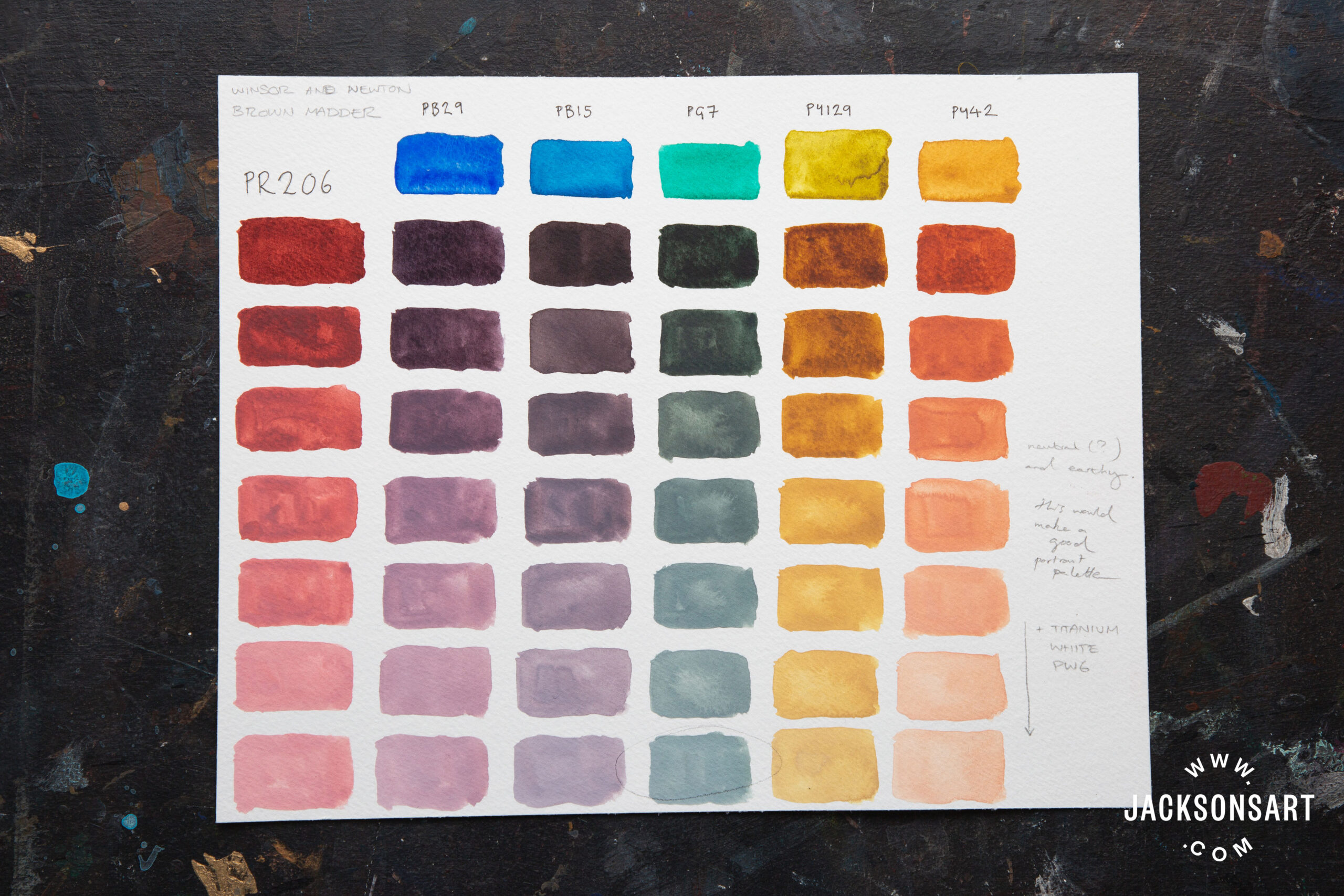 These Quinacridone Red pigments are so bright that we had a hard time capturing them accurately in a photograph. Both PR207 and PR209 are fresh and almost fluorescent. PR207 is the more orange of the two, while PR209 still has a hint of pink. 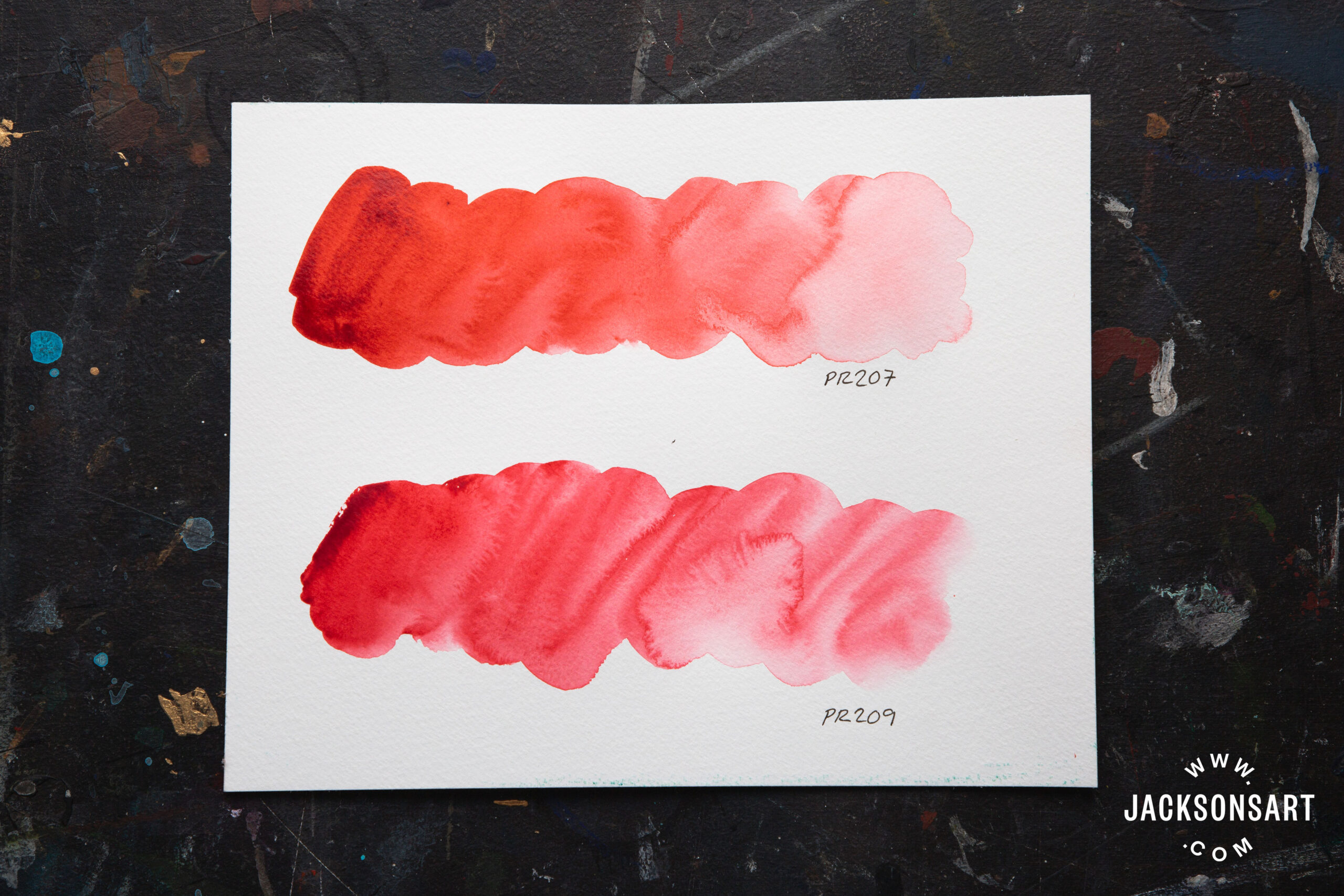 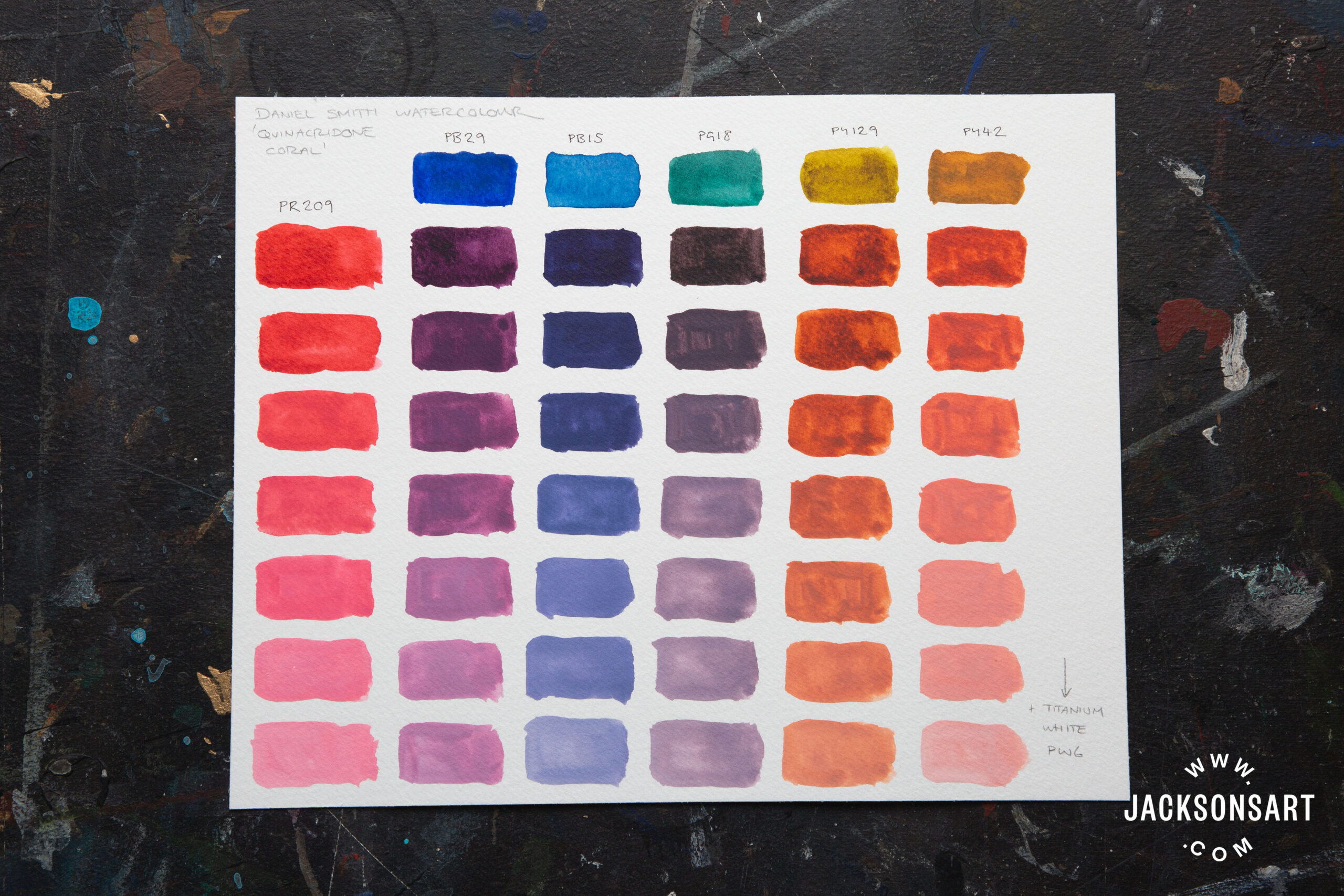 What Happened to Quinacridone Gold (PO49)? 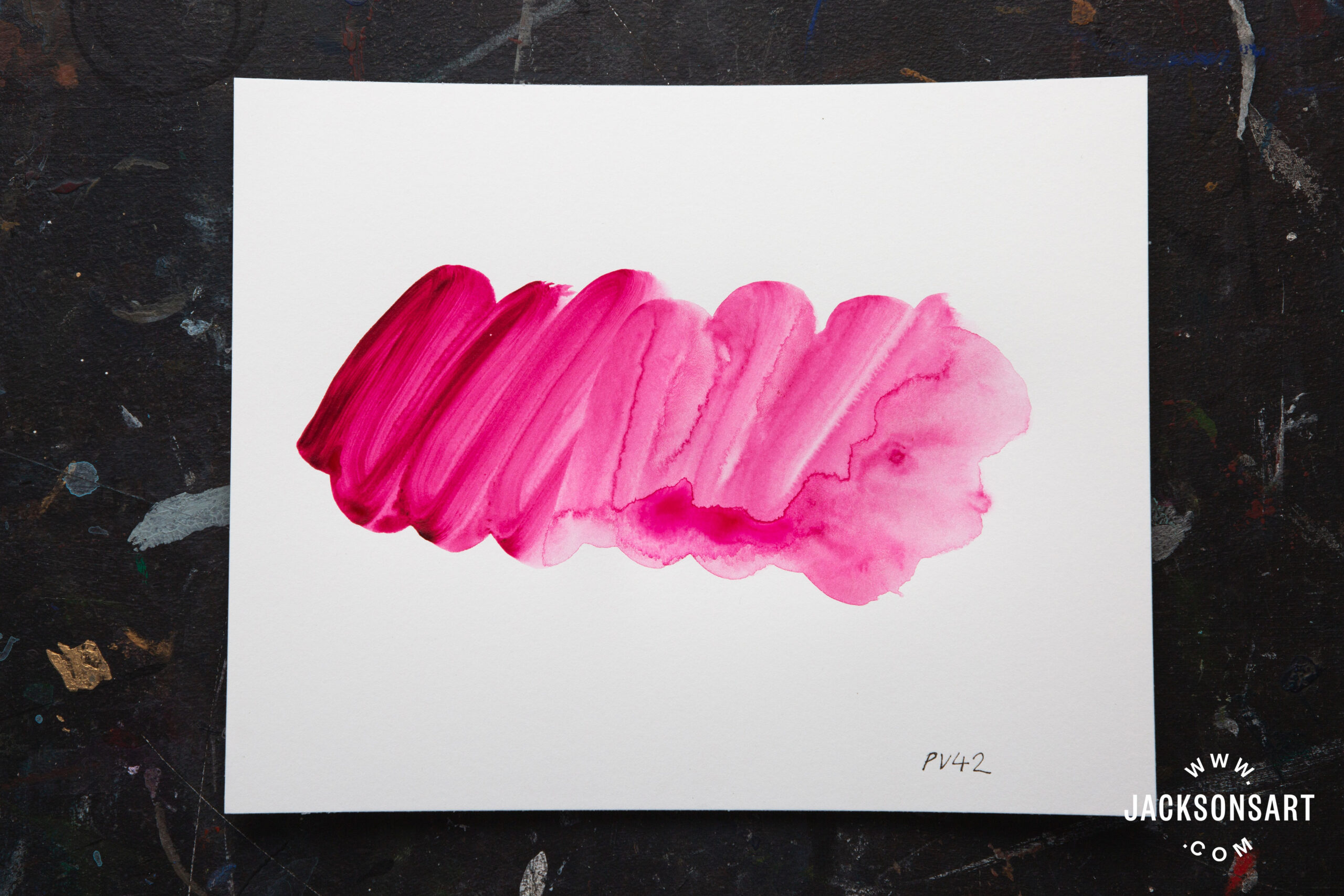 Langridge oil paint also offer PV42, but it is a more violet shade. 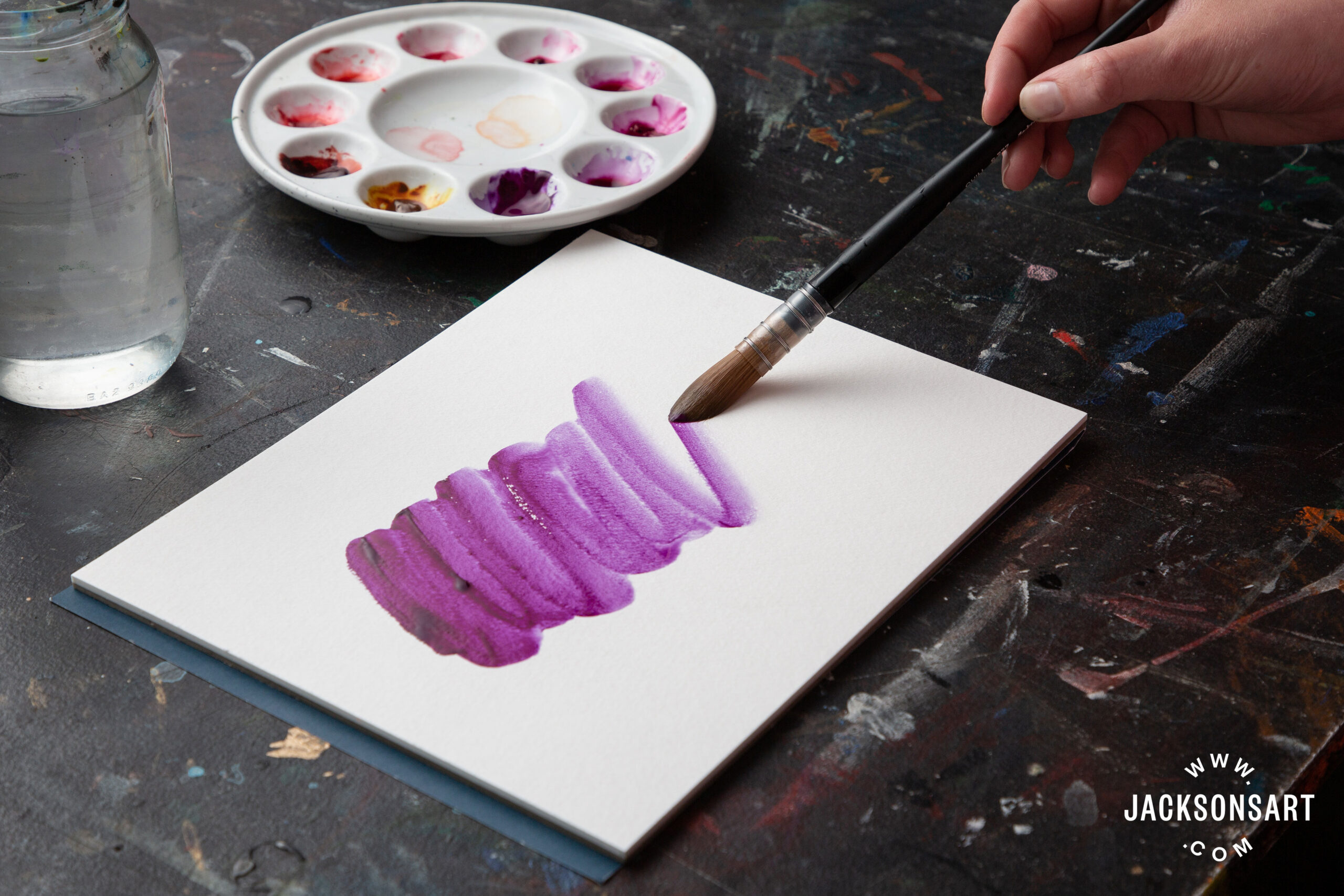 I have to admit that when I started writing this post I had always avoided Quinacridone pigments. Because of their reputed high chroma and tinting strength, I assumed that they would be overwhelming and bright – at odds with the muted colour palettes I like to use. But in writing this post and trying them out in mixtures, I found that they are full of subtlety and nuance – I will be rethinking my pigment choices! We’d love to know how you use Quinacridone pigments, let us know by leaving a comment.